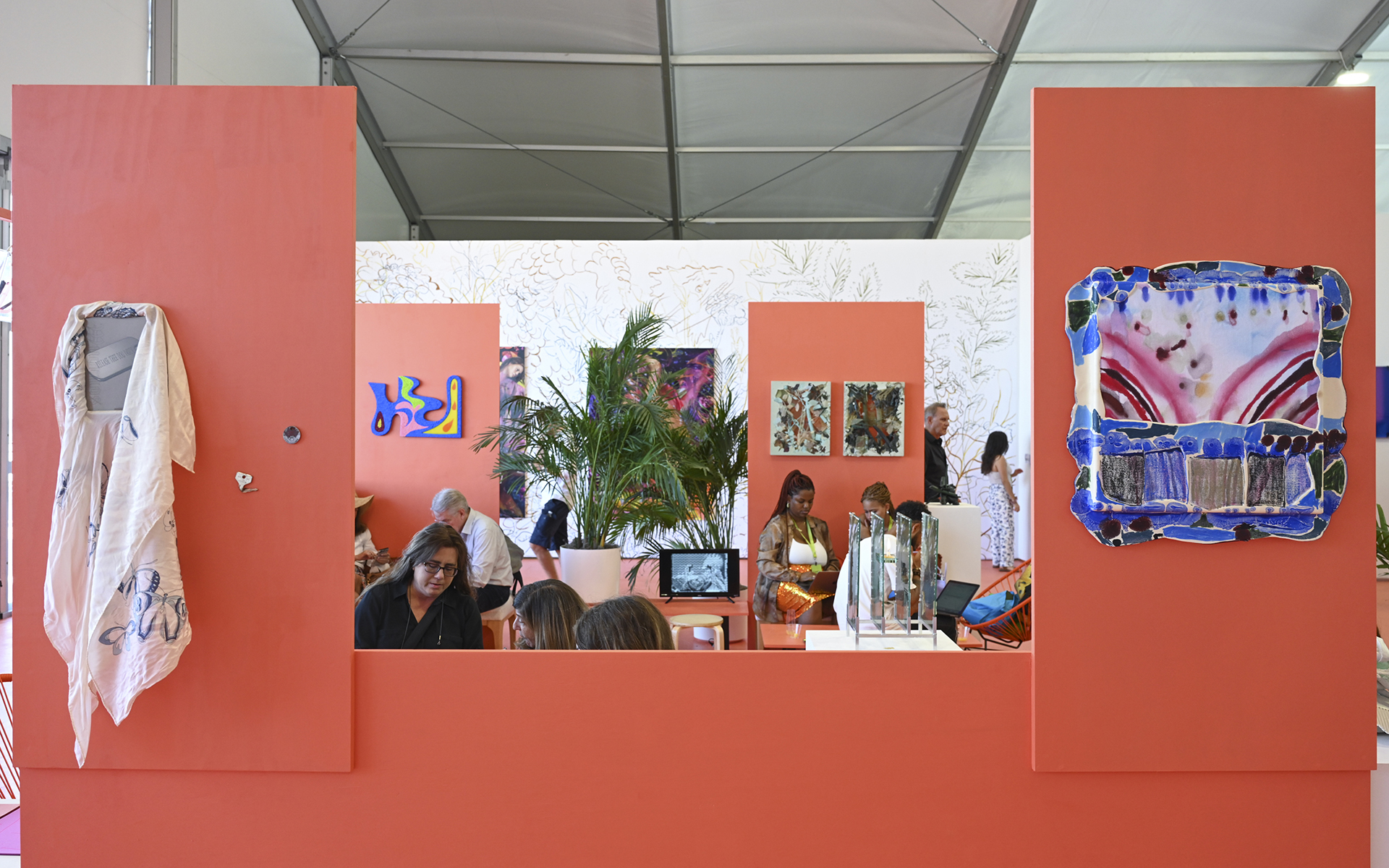 The Buzziest Projects, Performances, and Parties That Made a Splash During Miami Art Week

As the art week continues, the social scene is at its liveliest in recent years, coinciding with Art Basel Miami Beach’s twentieth anniversary

If art fairs are social catalysts as much as sector forces, Art Basel Miami Beach is the grand dame. The fair draws city-wide extravaganzas for industry insiders,  celebrities, art aficionados, and the public alike. The ongoing 20th edition of the Swiss-born fair does justice to its landmark anniversary and biggest iteration to date with nearly three hundred international galleries and ambitious programming on show—but the art and festivities at the Miami Beach Convention Center only make a portion of the Miami Art Week. 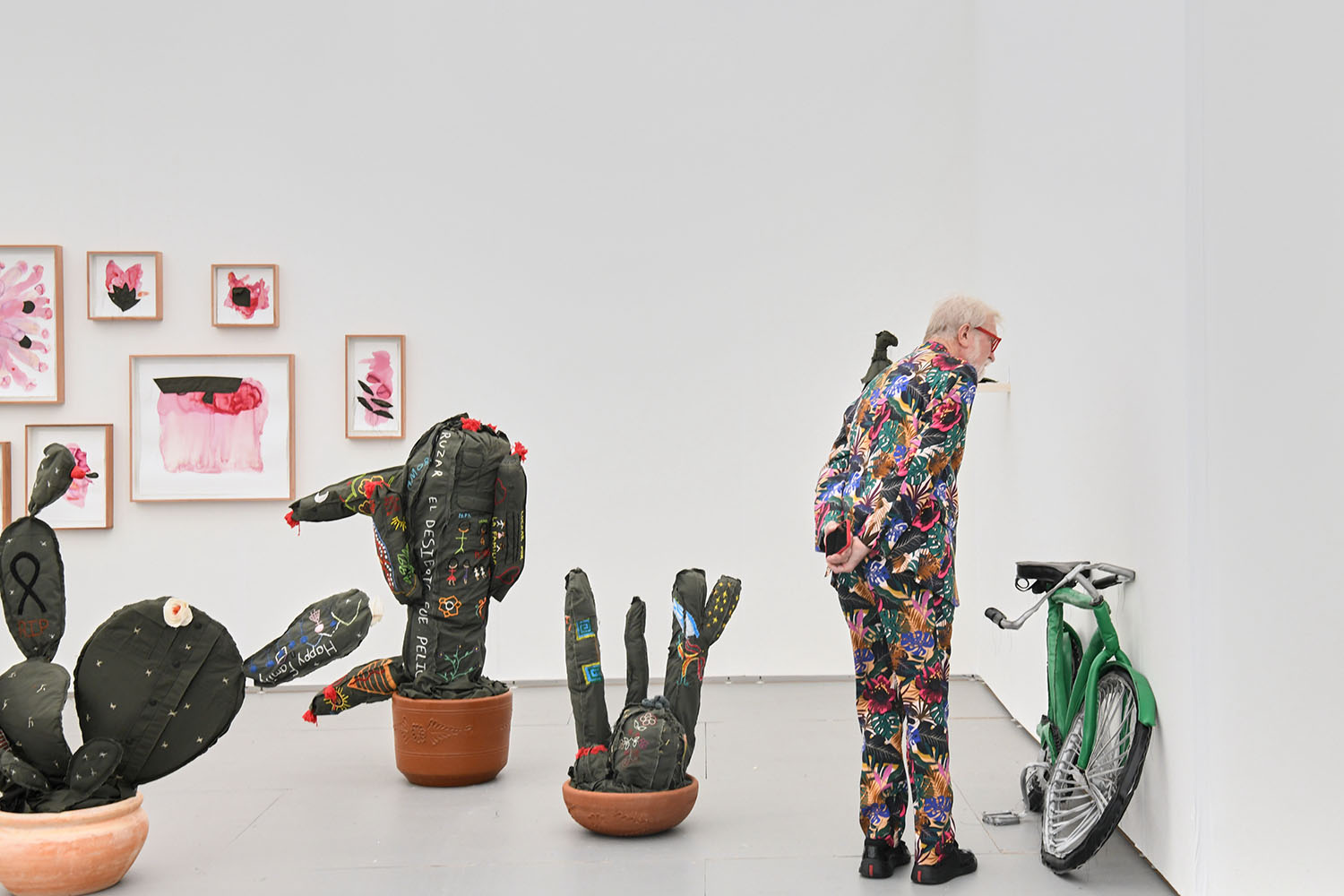 The concurrent fairs, talks, immersive experiences, exhibitions, and parties stretch across the South Beach, as well as mainland hubs like the Design District and Wynwood, igniting impossibly-packed itineraries and ambition to brave the traffic. In fact, celebration and gathering noticeably claim a large portion of this year’s Art Basel Miami Beach, proving life imitates art, too. 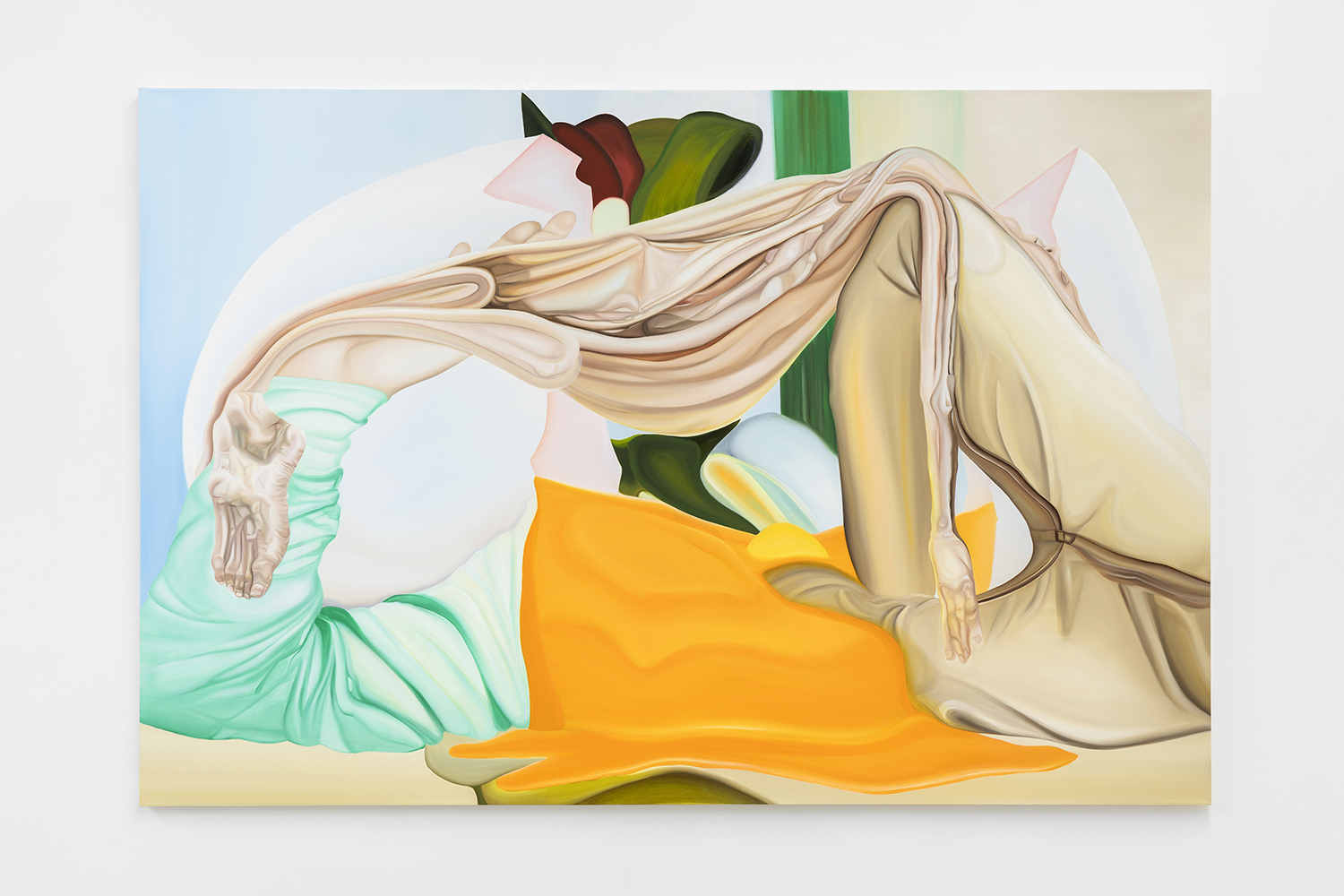 Art spills outside the fair walls. The City of Miami Beach’s ambitious public art program is geared up this year with the largest chapter of its No Vacancy project. 12 Florida-based artists exhibit art each at a different Miami Beach hotel. As the city is synonymous with its iconic hotels occupied by the art world during the fair week, bringing art to the lobbies, poolsides, and drive ways was a given concept for the city officials to prompt cultural tourism. “We wanted to combine our two most popular industries, hospitality and art and culture,” Brandi Reddick, the city’s Public Art Administrator, tells Galerie.

Miami-based painter Magnus Sodamin’s erratically abstract densely-colored abstractions sit at the Loews Hotel, including a monumental scale replica of an explosively dense painting at the front yard. Steps away from the hotel, the always-energetic Espanola Way is crowned with the Haiti-born local artist Edouard Duval-Carrié’s installation of trapeze dancers suspended over the street. Inspired by the Senegalese dancers the artist encountered during his time in France, the aluminum contortionist figures with ornate cut-outs—the inaugural edition of The City of Miami Beach’s public art project on the Espanola Way—add color and movement to the block peppered with lively restaurants and hotels. 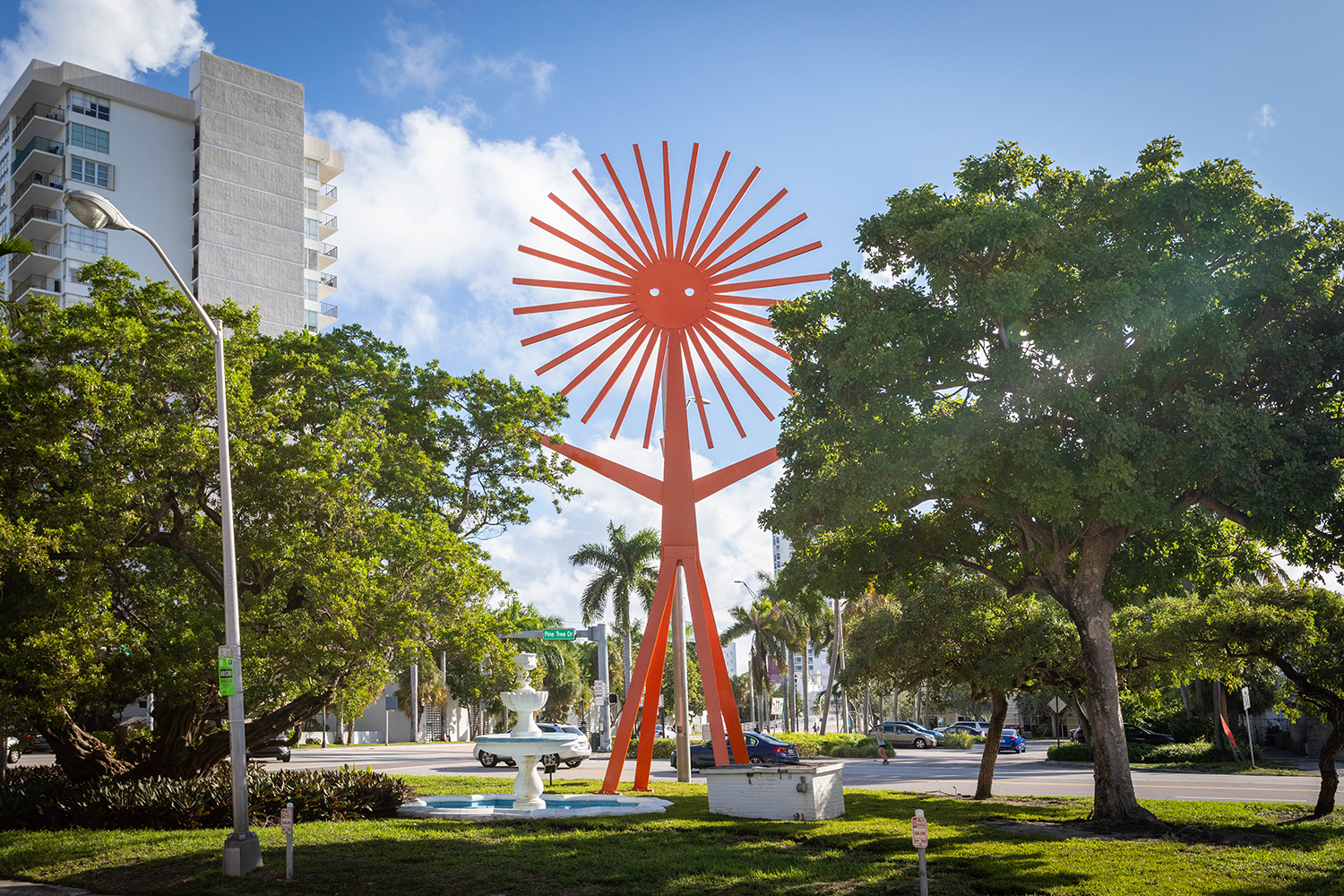 Another figure albeit surreal piece has landed onto the Henry Liebman Square: FriendsWithYou’s new character Starchild is a star-faced figure with wide open arms in an electric orange color. “Everyone who lives in South Beach drives through the causeway so we had to utilize the commuters’ views,” added Reddick. The Los Angles-based duo is widely known for their Little Cloud figure which even found its way into Macy’s Thanksgiving Parade as a massive float in 2018, and the new protagonist in their fantastical universe has come out of their decision to re-name the Earth as Ocean to whimsically emphasis our relationship with nature. 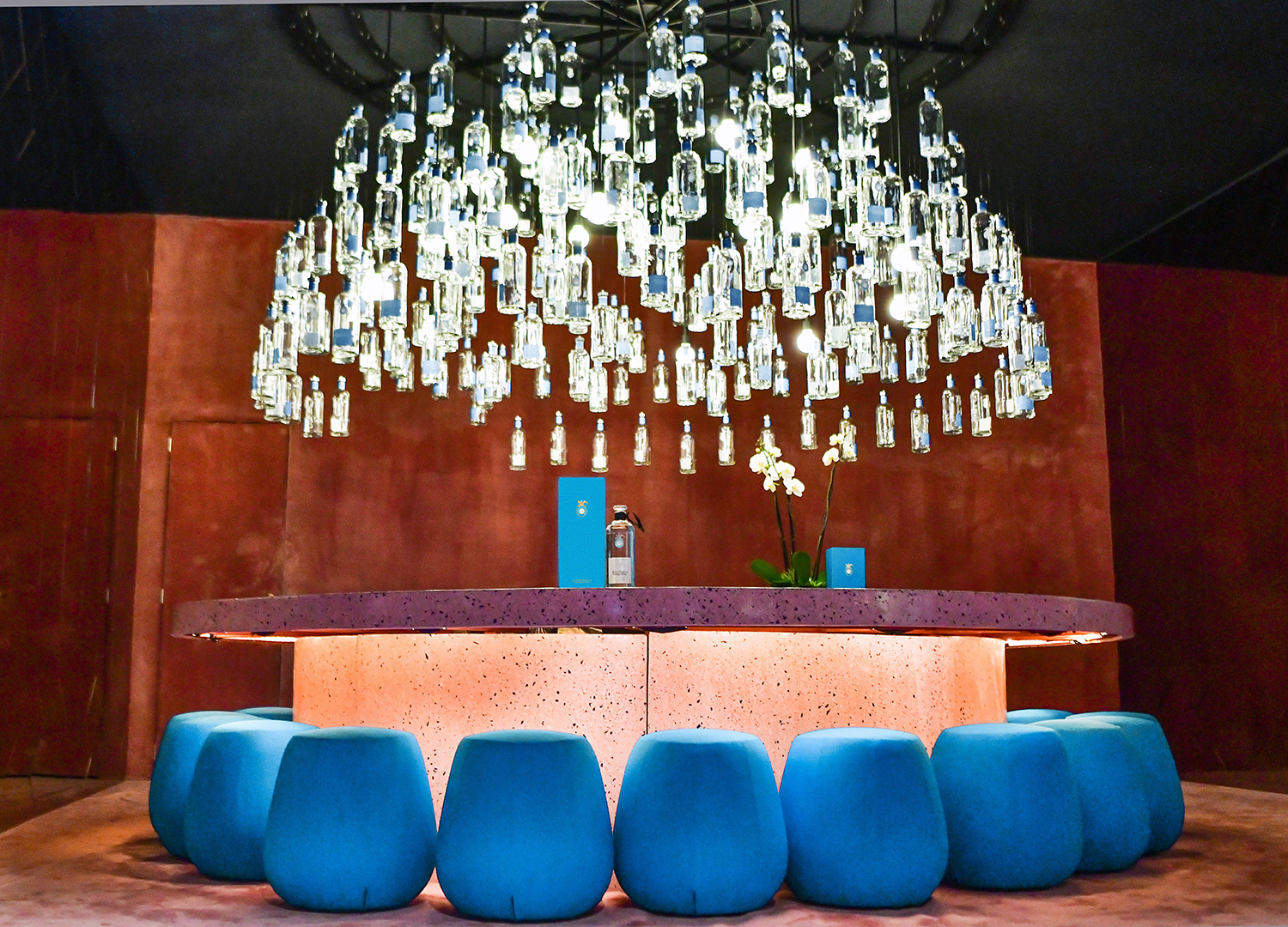 Down on the beach, the Dutch collective Random International’s immersive installation, Living Room, sits on the Faena Hotel’s beach, enveloping the visitors with thin verticals of light amidst a pitch dark room. Similar to their much-hyped former work the Rain Room (2012), the project plays with the visitor’ senses and movements while they roam the endless-seeming room through the thin columns of light. Each guests’ gestures are later translated into an NFT in collaboration with the digital art organization, Aorist, as a digital memory of the sensory experience. 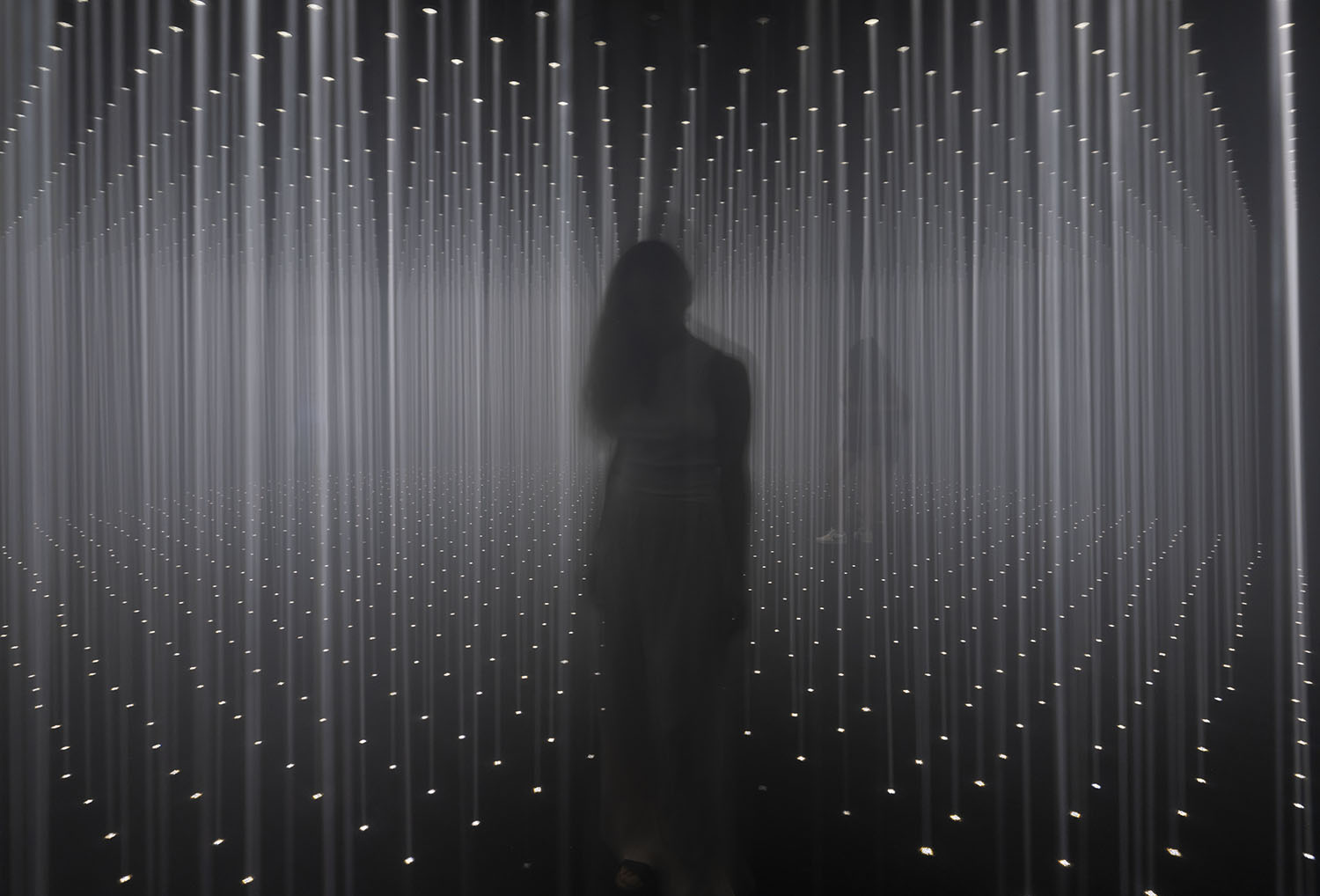 Half Gallery sailed off shore with its annual Stiltsville exhibition series in Miami’s Coconut Grove for which the guests were transferred to the Biscayne Bay town on a series of boats with pool floats designed by artist Asif Hoque on Thursday. The destination was the gallery’s thirty-three artist exhibition—featuring Eddie Martinez, Umar Rashid, Hiba Schahbaz, and Hiejin Yoo—installed inside one of the 1960s cabins on teal-colored walls. 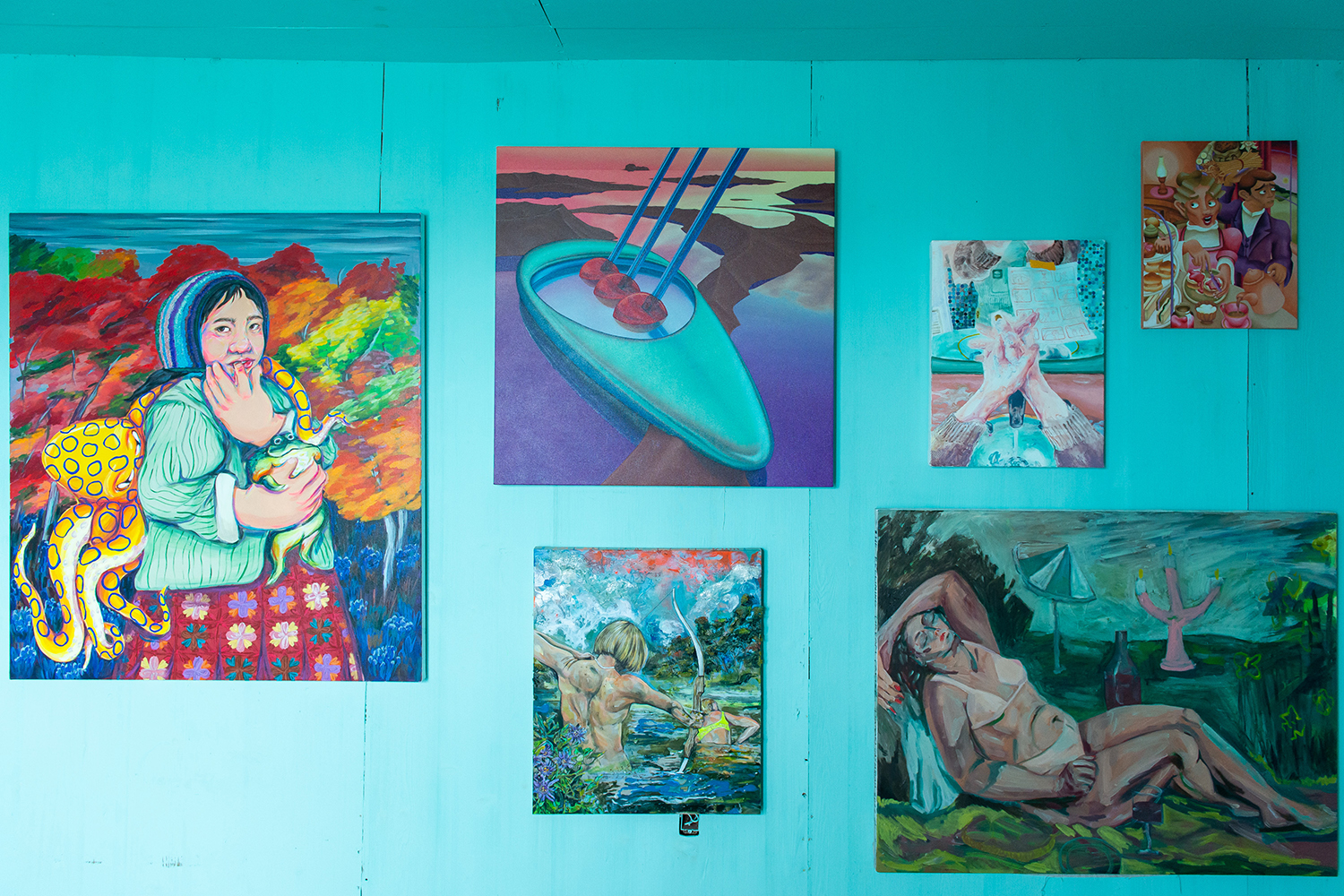 Half Gallery's Stiltsville at Art Basel Miami 2022. Photo: Courtesy of Half Gallery

At the Design District, Mario Carbone, the owner of New York’s celebrity-favorite Italian restaurant with cult following Carbone, has launched its clothing line Our Lady of Rocco which pays homage to the 1980s’ New York, including reworked vintage Cerruti items. The week-long presentation occupies another Carbone institution, ZZ’s Club, steps away from other Design District offerings, including Design Miami/ founder Craig Robins’s collection exhibition, Two of The Same Kind. From Mickalene Thomas to Isabelle Albuquerque and Christina Quarles, mostly female contemporary artists—in addition to surprising exceptions such as Goya— take over the two floors at the Design District offices. On the design side, both Fendi Casa and Dolce Gabbana Casa have opened this week their Miami locations in the district lined with high-end boutiques and design shops. 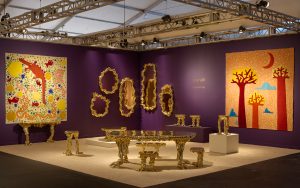 As the tradition goes, a robust festivity calendar is the fair week’s cherry on top. On November 28, the British powerhouse gallery White Cube threw its annual bash at the Soho Beach House Miami with a beach-side celebration with Kelis giving a mini concert to a crowd that included Joe Jonas, Eric André, and Michèle Lamy. The Design District responds to the South Beach’s gilded nights with a series of dinners prepared by star chefs, such as Massimo Bottura and Missy Robbins at a pop-up restaurant where the reflective sculpture Garden of Reflections by Phillip K. Smith III accompanies the culinary experience. Hauser & Wirth celebrated its magazine Ursula’s new issue with cover art by Henry Taylor at Carbone’s Miami location. Among those who tasted the restaurant’s signature rigatoni was Venus Williams.

The celebration spilled onto the beach, too. Ruinart champagne toasted to its collaboration with the Danish artist Jeppe Hein who translated his jubilant visual language into a beach lounge installation, titled Right Here, Right Now, featuring meditative sound bath and Hein’s signature participatory drawing exercises. The guests lounging on the artist’s inviting canopy on Tuesday night included Into the Heights actor Anthony Ramos. 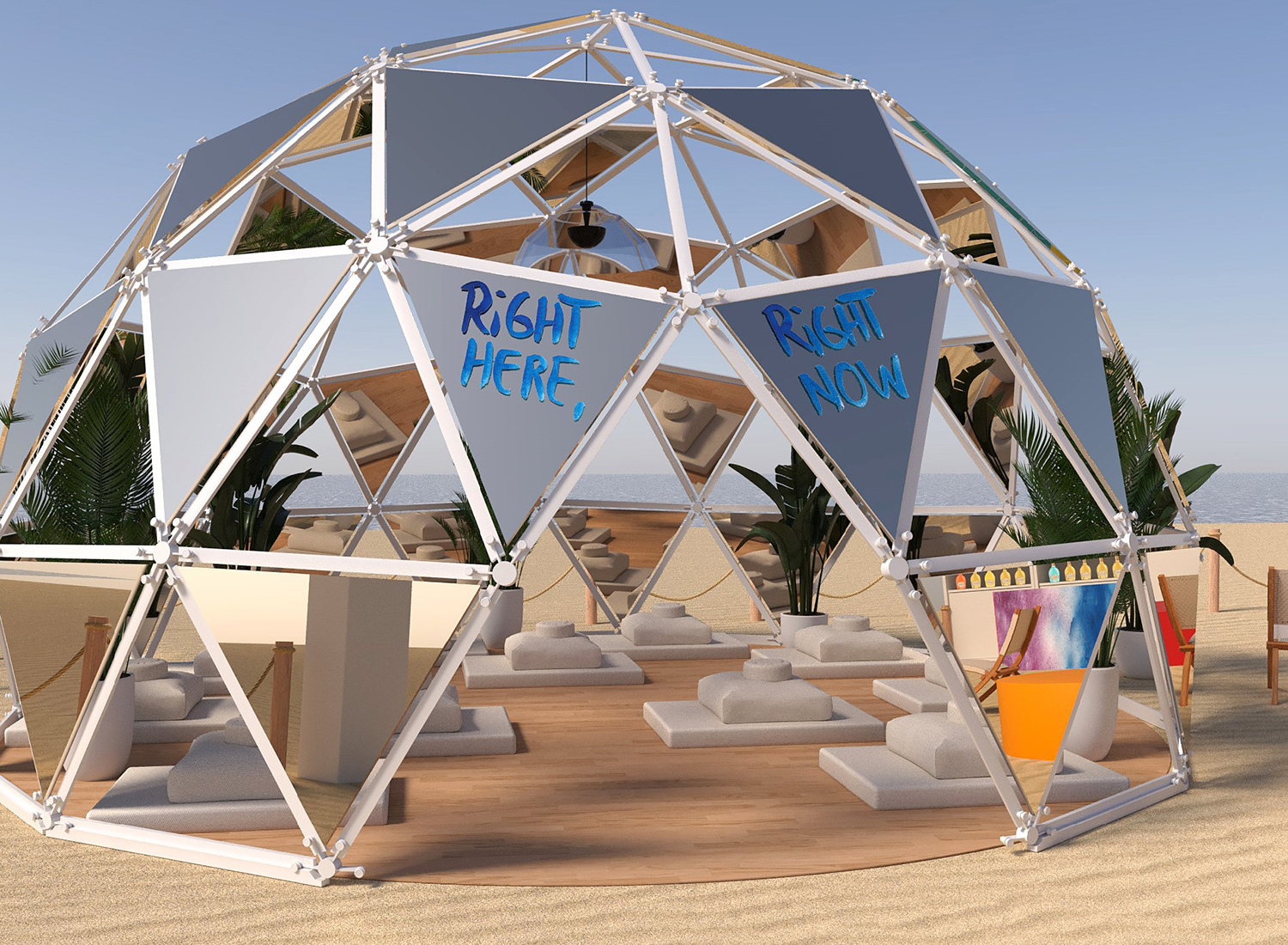 Wednesday morning started with Serpentine Gallery’s annual Miami breakfast at Casa Tua, hosted by the Londoner institution’s CEO Bettina Korek and artistic director Hans Ulrich Obrist. Italian maestro of design Gaetano Pesce and Brooklyn-based painter Doron Langberg, who opened his solo exhibition at the Rubell Museum, a few days earlier were in attendance. Fotografiska joined the week with a night dedicated to its upcoming exhibition Hip-Hop: Conscious, Unconsciousness—rapper Jadakiss first took the stage at the mid-century Cuban synagogue and then sat down for a conversation with DJ Stretch Armstrong. Back on the mainland, ICA Miami hosted a gathering with Judy Chicago and Pussy Riots member Nadya Tolokonnikova on Thursday night. The attendees were invited to answer questions such as “What If Women Ran The World, Would Buildings Resemble Wombs?” in front of the camera as part of an upcoming NFT project between the two artists.

Perez Art Museum’s annual art week bash included a musical performance by Meshell Ndegeocello next to the Argentinian artist Leandro Elrich’s Swimming Pool installation which gives the participants the illusion of being engulfed in a pool while remaining dry. During the evening, the pool served as a sunken stage as dancers performed “underwater” while partygoers also had chance to visit Eldrich’s new exhibition Liminal inside the museum. 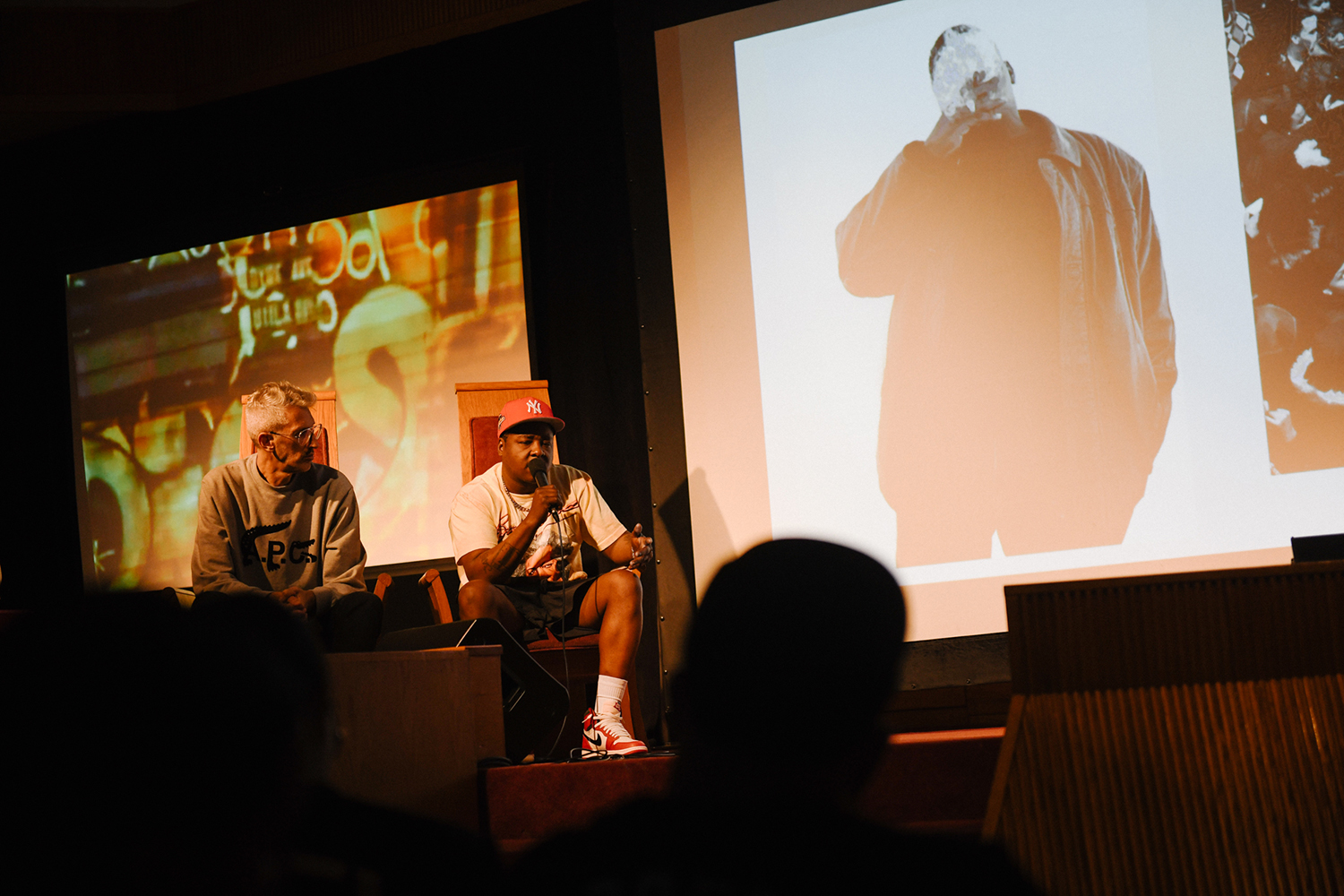 With the art week continuing into the weekend, the buzz and excitement around both art and the social scene continues in full speed. Next on the agenda is legendary Detroit DJ and sound artist Carl Craig’s record-signing party at the Miami Beach Edition hotel for his new release Party/After-Party and Kickstarter’s annual dinner at The Standard Spa which this year honors artist Azikiwe Mohammed.