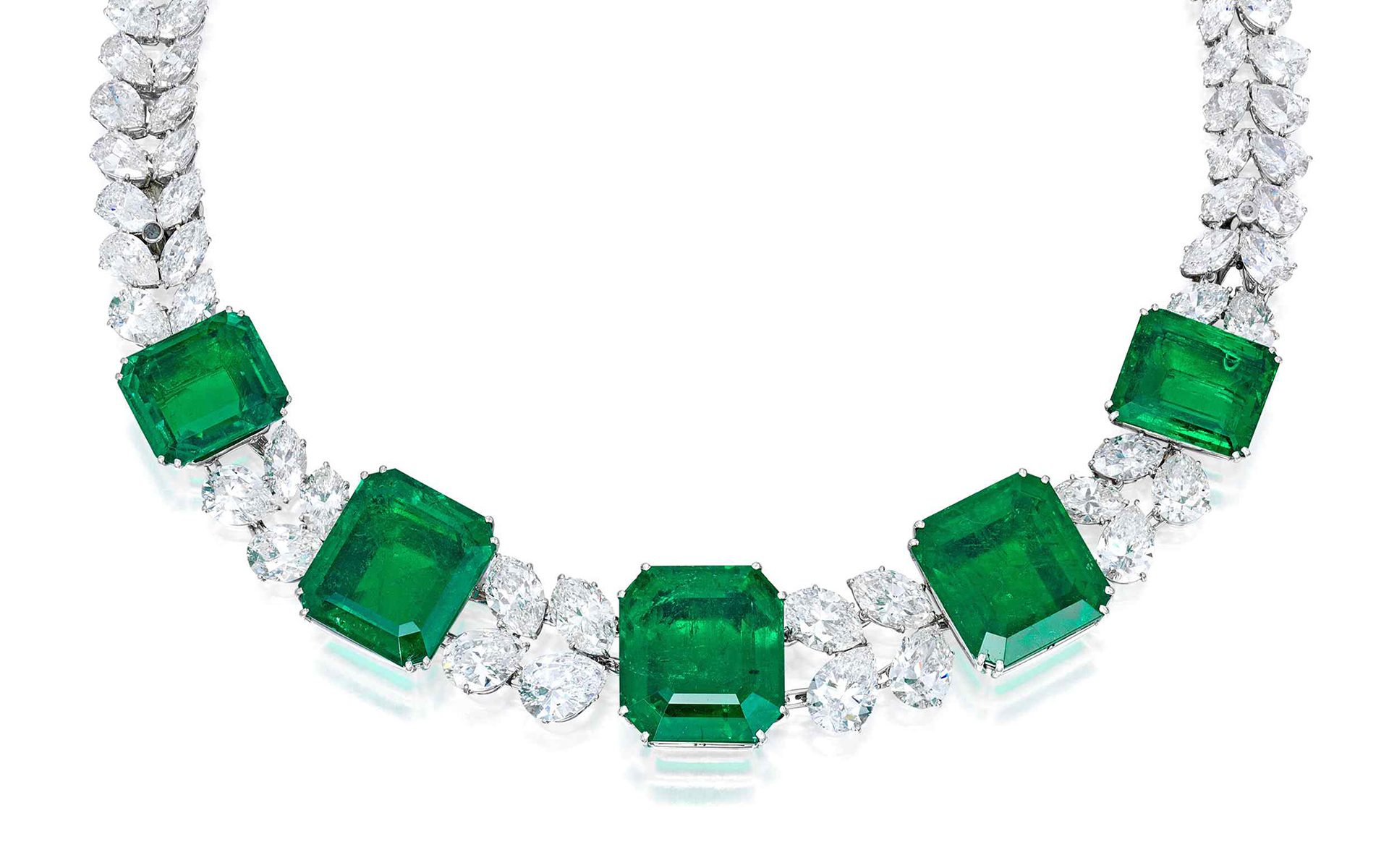 5 Jaw-Dropping Jewels That Sold at Sotheby’s This Week

From a dazzling necklace by Andrew Clunn set with 28 oval diamonds to a Harry Winston Colombian emerald and diamond necklace, the New York sales were all about bold glamour 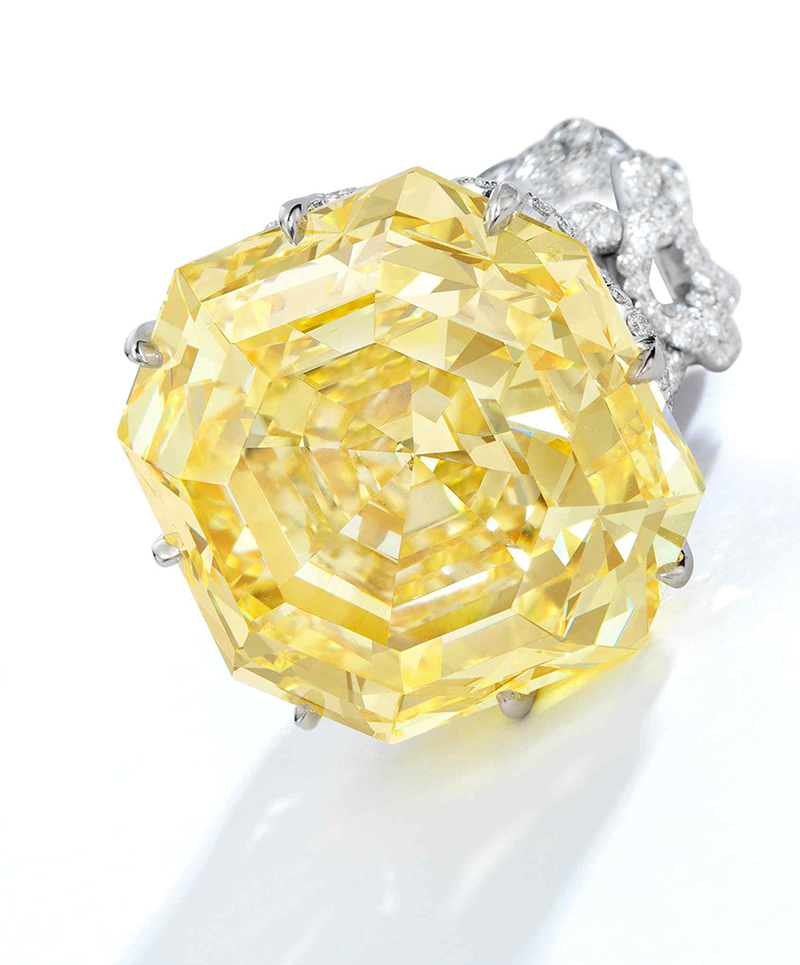 The New York magnificent jewelry sales at Sotheby’s, which took place on June 9, seemed to captured the sense of the city reawakening and the bubbling anticipation to reenter the world and dress up once again. Of the 94 lots, 93 percent sold, with 65 percent of sold lots achieving prices above their high estimate.

Following the Geneva sales, which are famous for selling the most impressive pieces at record prices, this auction featured an equally strong array of colored gemstones, important diamonds, and iconic designs from the esteemed French maisons like Van Cleef and Arpels, Bulgari, Cartier, and Harry Winston. Noteworthy were extraordinary Kashmir and Ceylon sapphires, Colombian emeralds, and Burmese rubies, all set into fabulous designs that would make any return to society one to remember.

The most buzzworthy piece in the lead-up to the sale was the gobsmacking fancy vivid yellow diamond set with white diamonds with an innovative setting by London jeweler Glenn Spiro. At 73.11 carats, it carries the highest color grading for a yellow diamond by the Gemological Institute of America. On offer with an estimate of $3 million, the jewel failed to sell on auction day, but it still attracted a slew of attention from jewelry aficionados and the public during the preview weeks.

Below, Galerie has rounded up some of the highlight results. 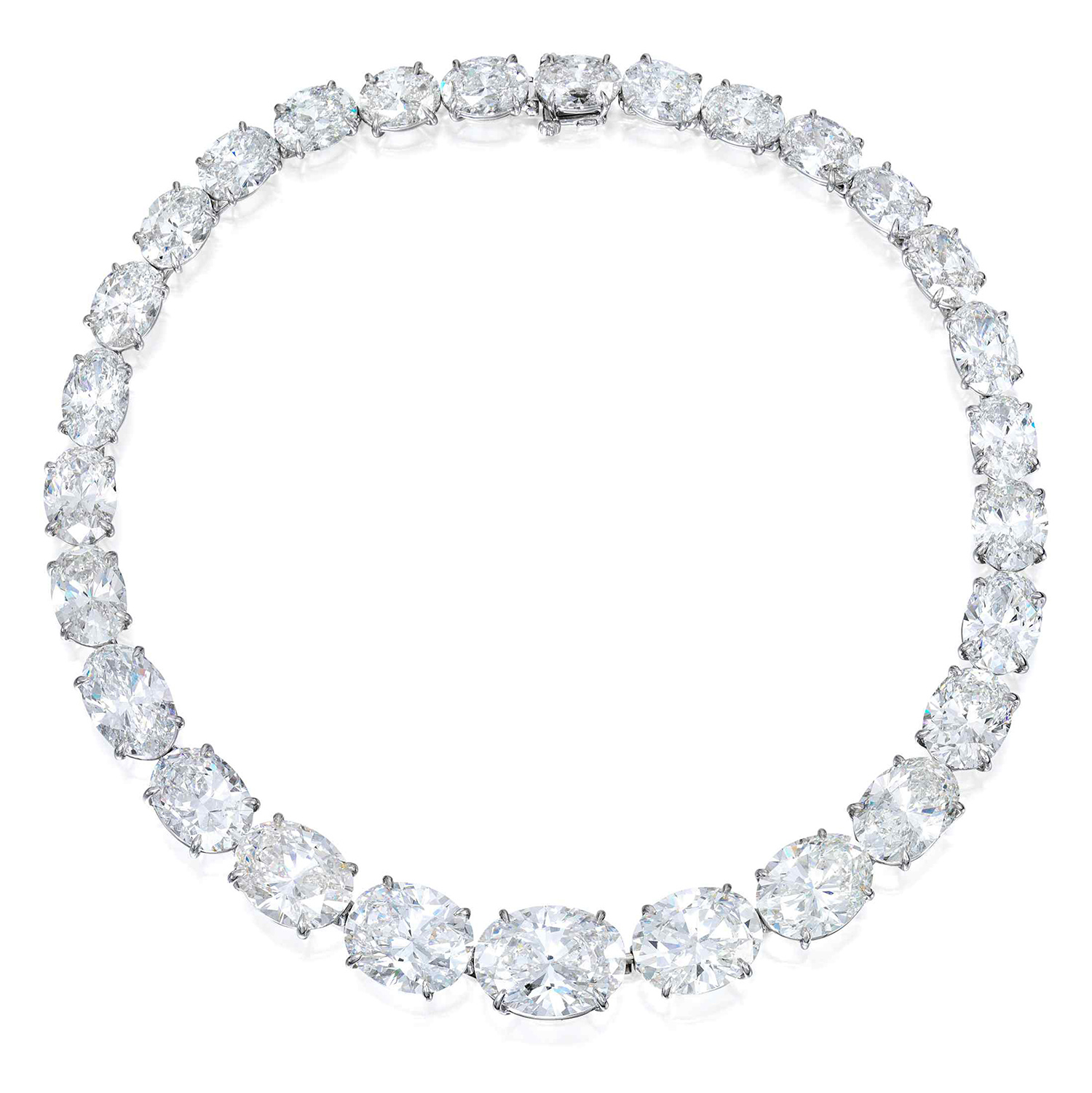 At the center of the sale was a group of six show-stopping jewels from a distinguished private collection being sold to benefit charity. The highlight was this exquisite necklace by Andrew Clunn, set with 28 graduated oval-shaped diamonds totaling over 168 carats, which sold for an impressive $4.1 million, establishing a new record for the designer at auction. It had an estimate of between $2 and $3 million. With an atelier on Madison Avenue during the 1980s, Clunn was a favorite among prominent society women and distinguished families of the day. 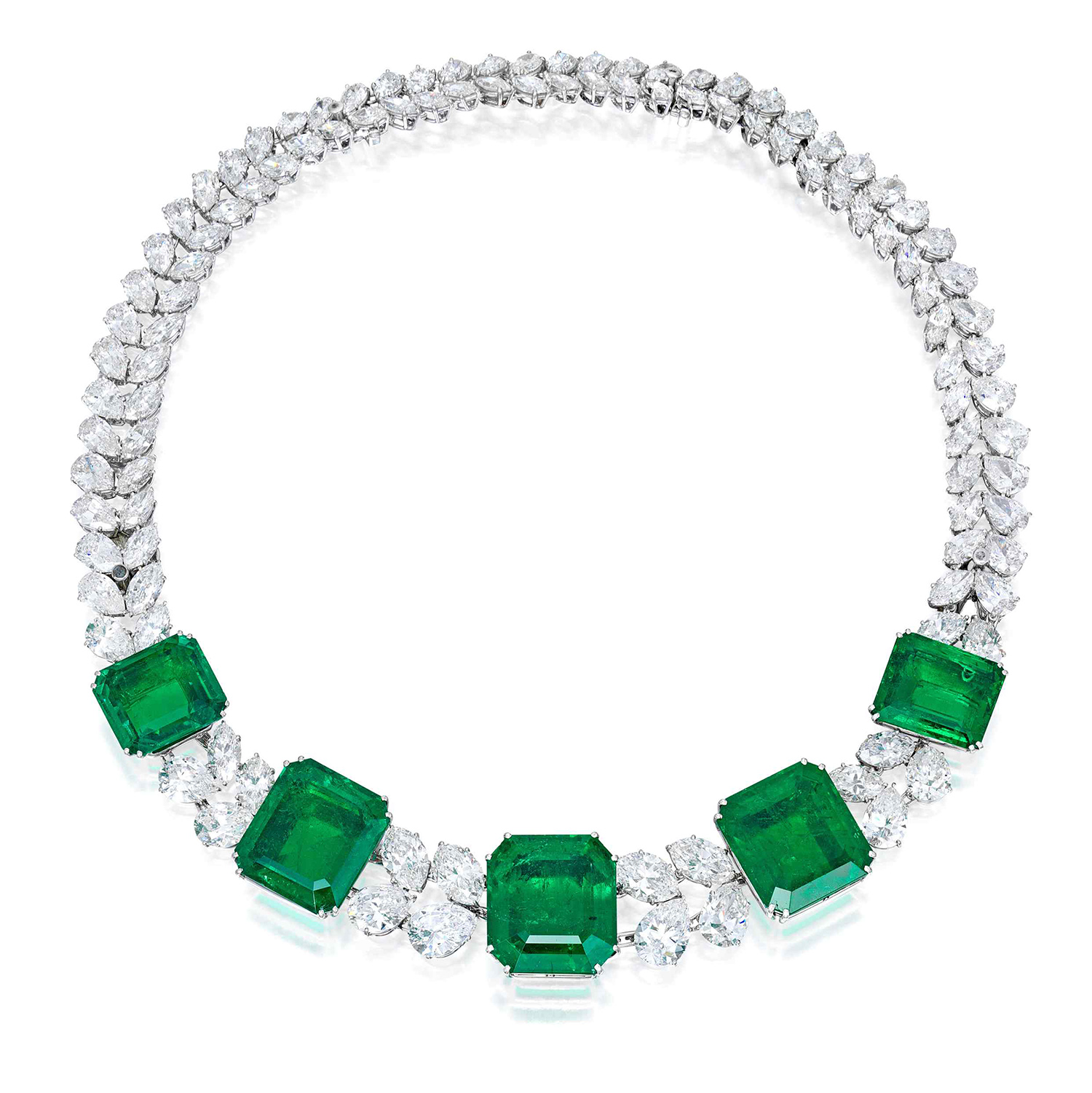 This glamorous Colombian emerald and diamond necklace by the so-called King of Diamonds, Harry Winston, was acquired for $2.8 million, surpassing its estimate of $1.5 to $2.5 million. It is a perfect example of the New York jewelry house’s combination of rare stones and technical know-how. 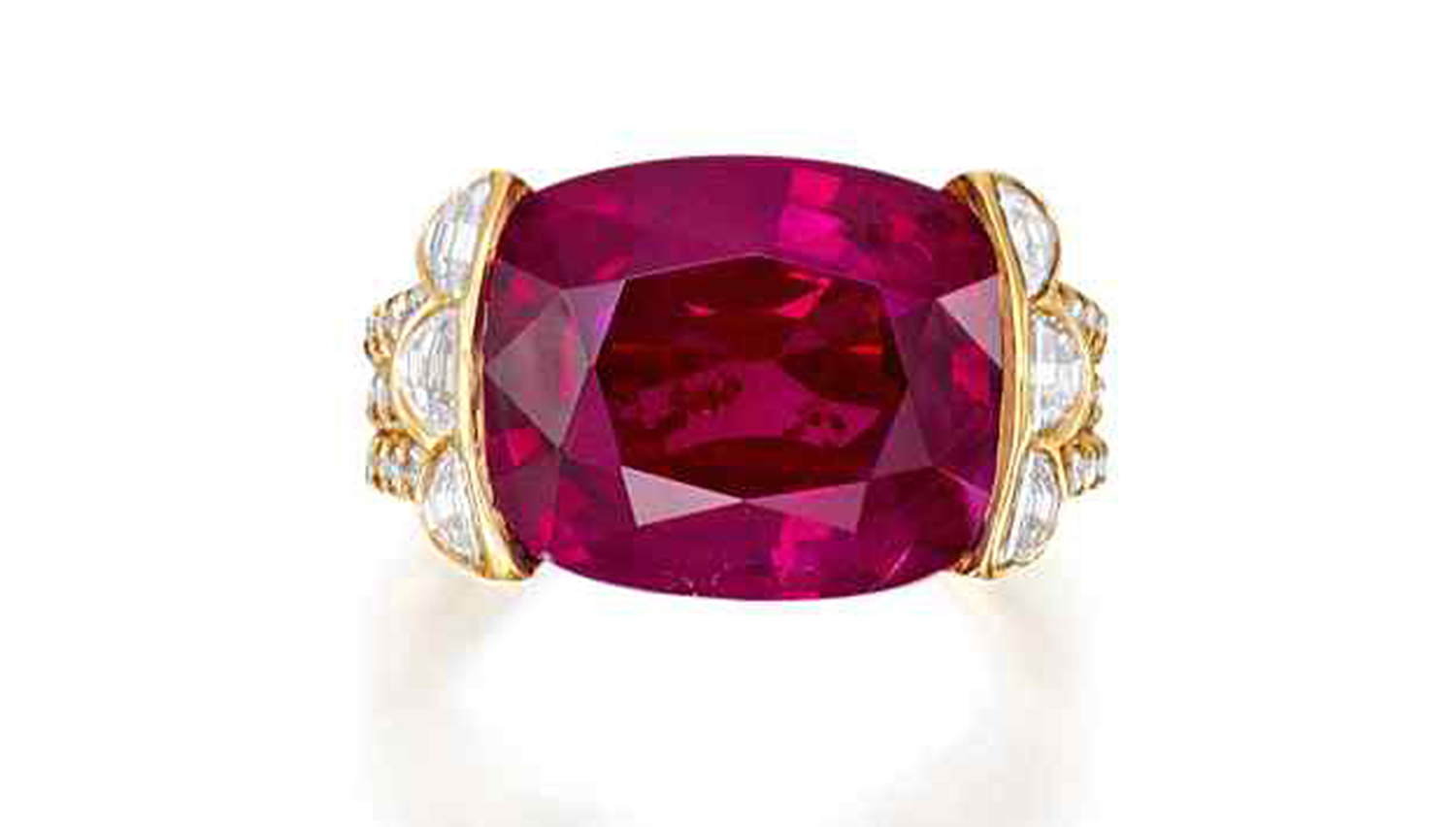 An exquisite 13.02-carat Burmese ruby, mounted as a ring by Carvin French, sold for $2.5 million, exceeding its low $1 million estimate. The ruby is accented by half-moon-shaped and round diamonds dreamed up by the noted jewelry firm, which was founded in 1954 by two Frenchmen working together in New York. 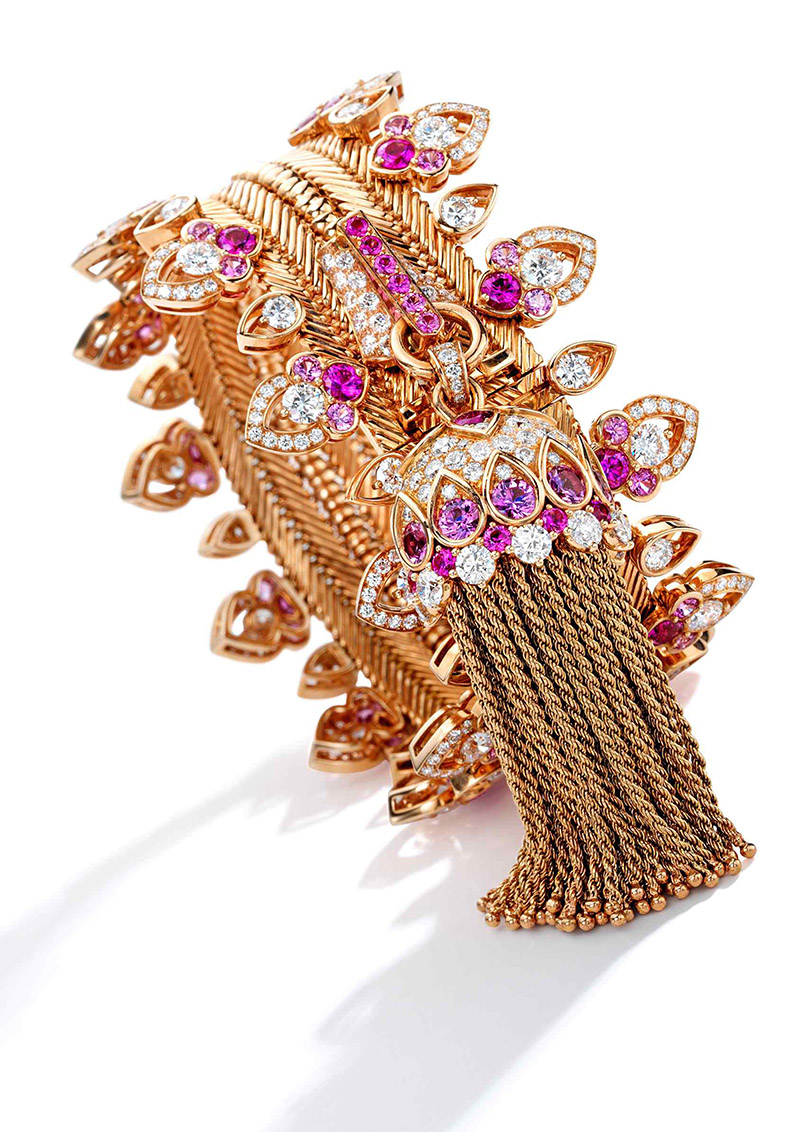 A stunning example of the iconic Zip Antique Udaipur necklace set with diamonds and pink sapphires by Van Cleef & Arpels sold for $504,000, surpassing its estimate of $250,000 to $350,000. With an innovative design, the necklace can also be worn as a bracelet. One of the house’s boldest creations, the design was said to have been conceived by the Duchess of Windsor, a prominent jewelry collector, who was fascinated by this new zipper mechanism appearing on clothes at the time. Decades later, they are as coveted as ever. 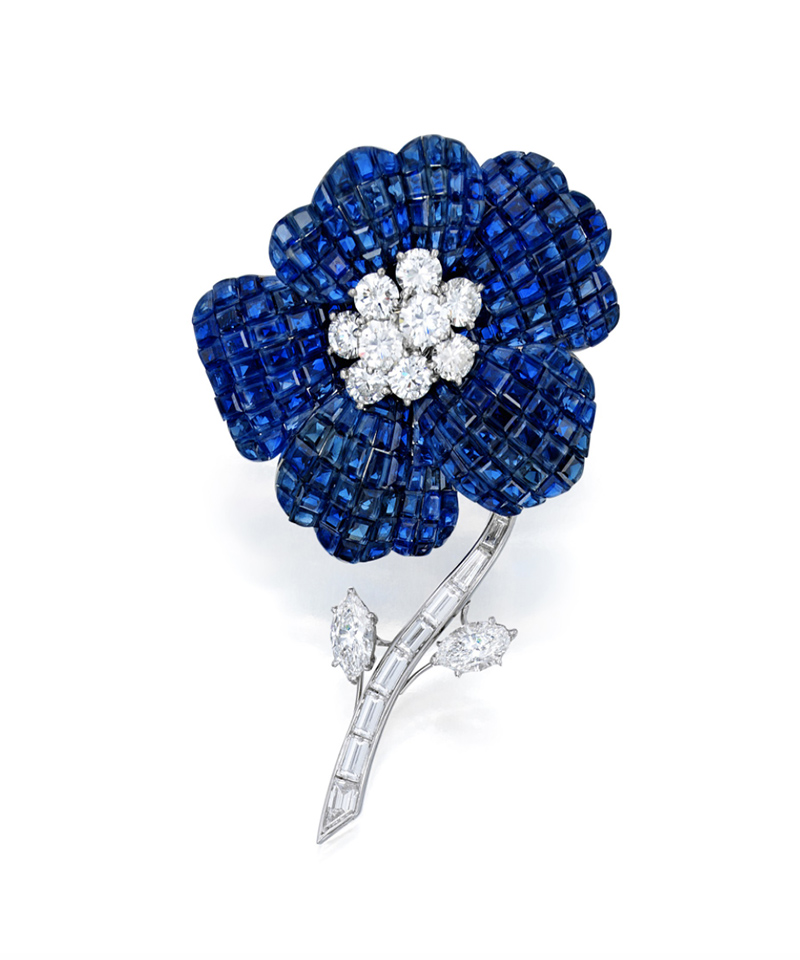 This sapphire brooch was crafted using the maison’s signature mystery-setting and the stems are set with baguette diamonds. After hundreds of hours of labor, the unique technique allows the jewel to seem fluid and full of life. This piece fetched $252,000 against an estimate of $150,000 t0 $250,000. 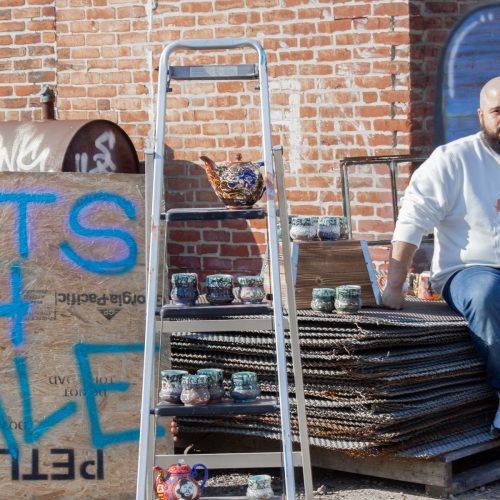