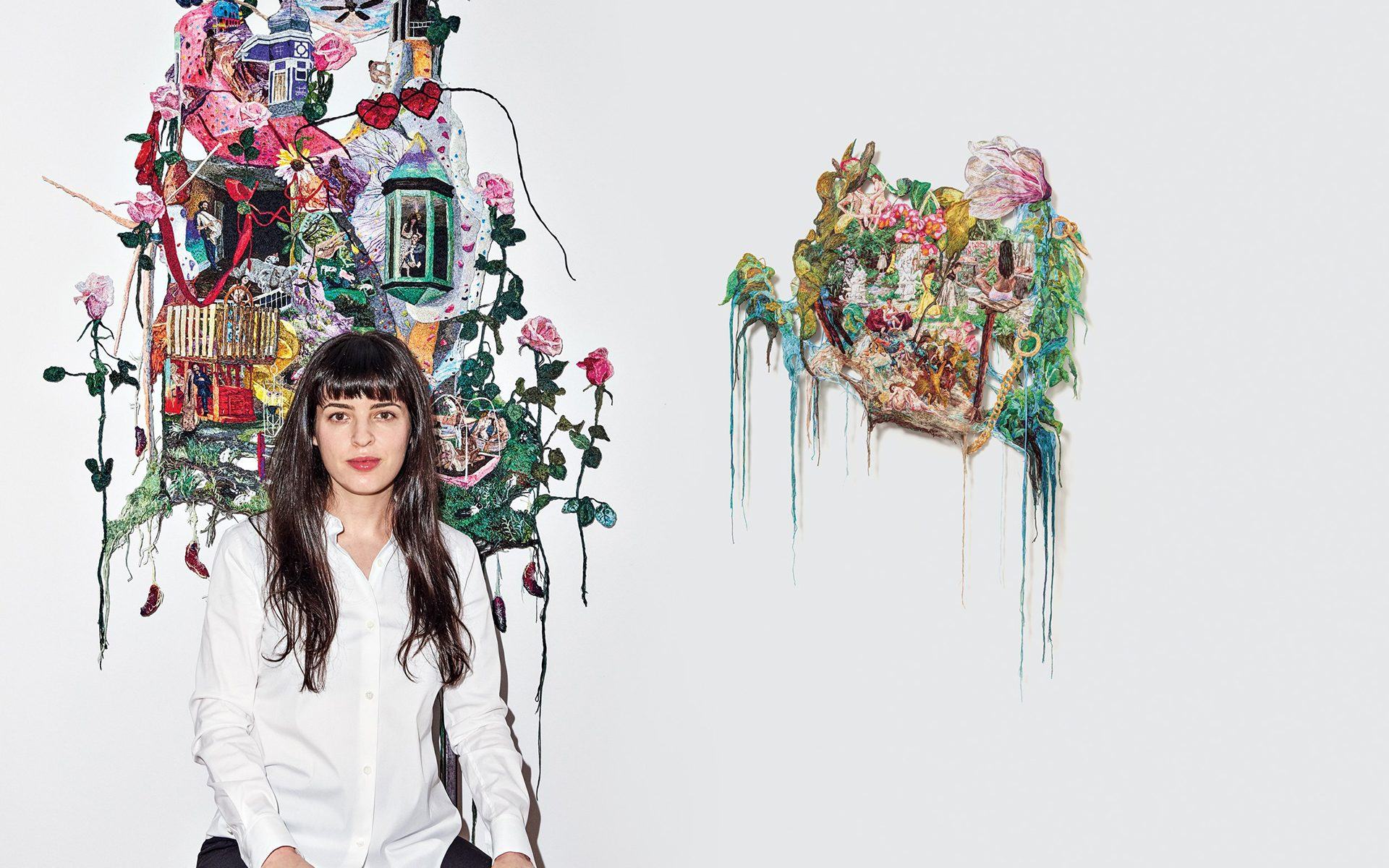 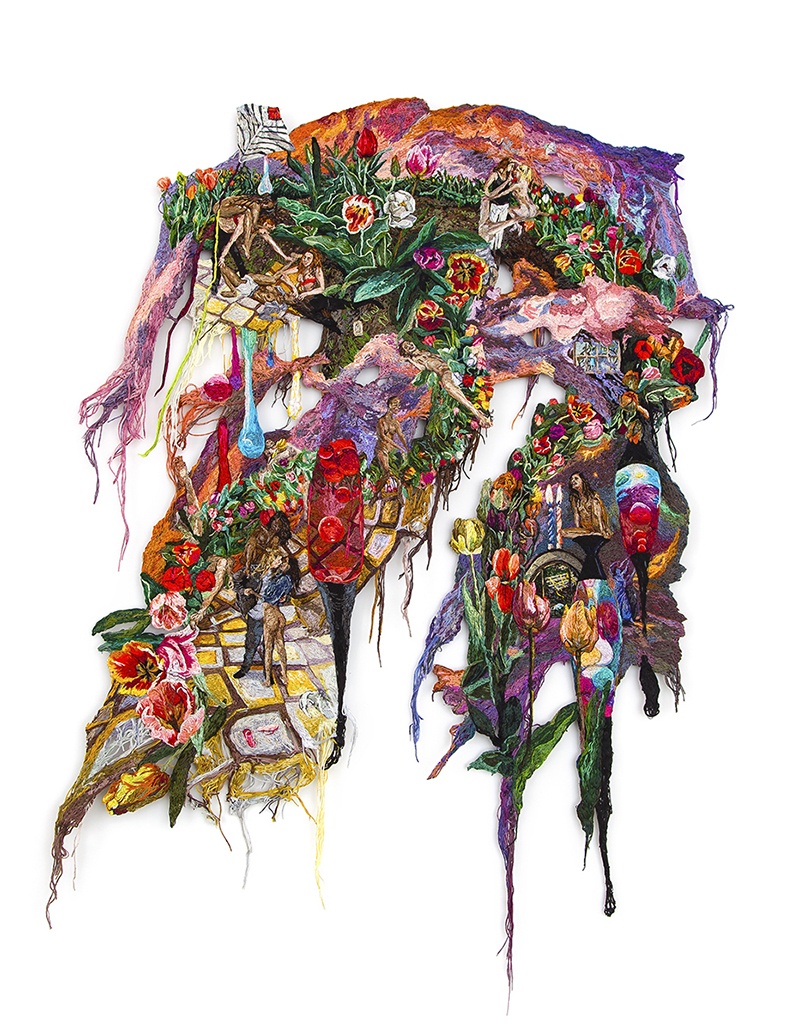 Through closed eyes by Sophia Narrett. Photo: Courtesy of the artist and Kohn Gallery

When Sophia Narrett traded in her paint tubes for embroidery thread, she never looked back. The switch happened while the New York artist was completing an MFA in painting at the prestigious Rhode Island School of Design and found herself experimenting with thread. “I fell in love with the process right from the start,” she says. The medium has certainly worked for her: Last year, Narrett was named the winner of Galerie’s Emerging Artist Award and received the $10,000 prize by Galerie’s editors and a jury of art-world luminaries, who reviewed over 400 artist portfolios.

Painting with thread, Narrett has gained traction in the art world for her intricate weavings that depict fantastical scenes filled with romance, love, violence, and sexual desire. “Weaving freed things up for me and just made sense for the narratives I am trying to tell,” she explains. “It removed some of the obstacles I was finding with painting; the set palette, for example, and having the mark really count.” 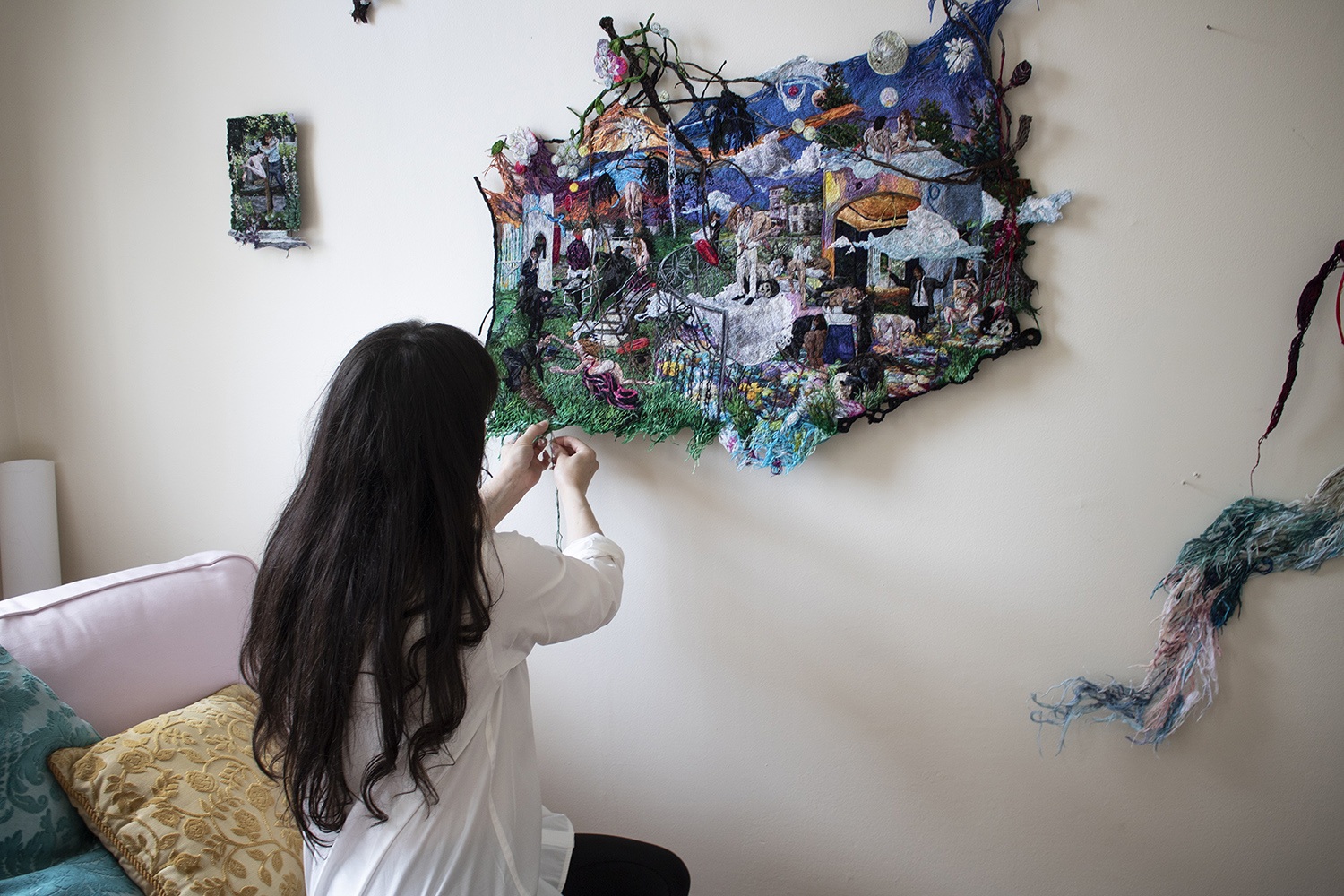 Sophia Narrett working in her studio. Photo: Courtesy of the artist

Now, a new series of tapestries that she has been working on for the past year are now taking center stage in an exhibition at Kohn Gallery in Los Angeles. Titled “Soul Kiss,” the show was due to take place earlier this year but was postponed due to COVID-19. Recalling epic 15th- and 16th-century canvases by Hieronymus Bosch, the seven meticulously detailed, heavily layered pieces tease out questions of identity, sexuality, and fantasy. 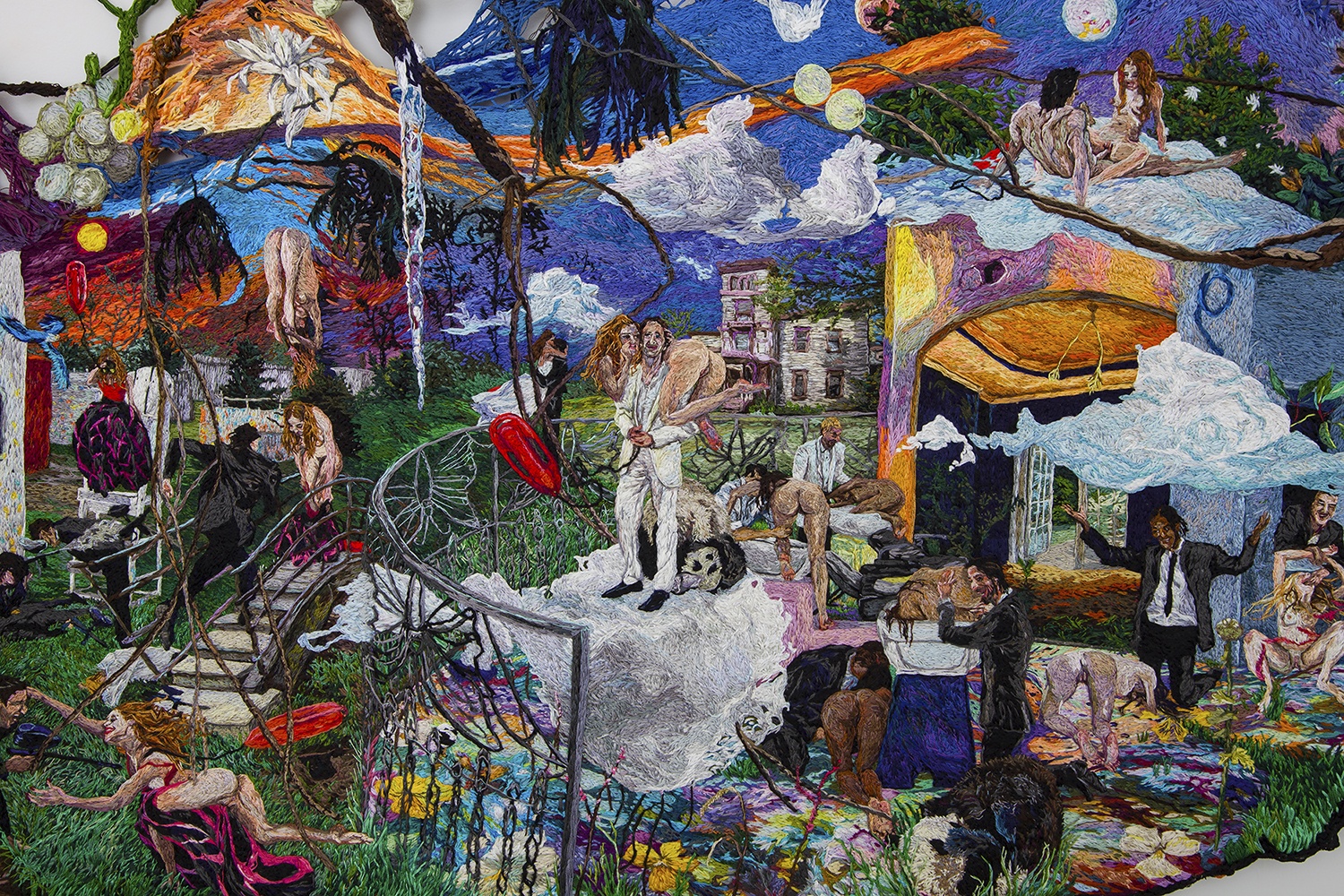 Whisper like a Magnet, 2020. Photo: Courtesy of the artist and Kohn Gallery

The largest work, titled Whisper like a Magnet, features characters in different positions of domination and submission, freedom and restraint. In one section, a naked woman is thrown over the shoulders of a man in a white suit. In another, a couple run towards each other, while others are engaged in explicit sexual acts. “I had this idea of lovers rescuing each other. The two characters are bound together in ideas of mutual recognition and joy. What does it mean when one figure is clothed and one is naked, or when one seems more dominant?” Narrett says of the work, which took almost six months to complete. 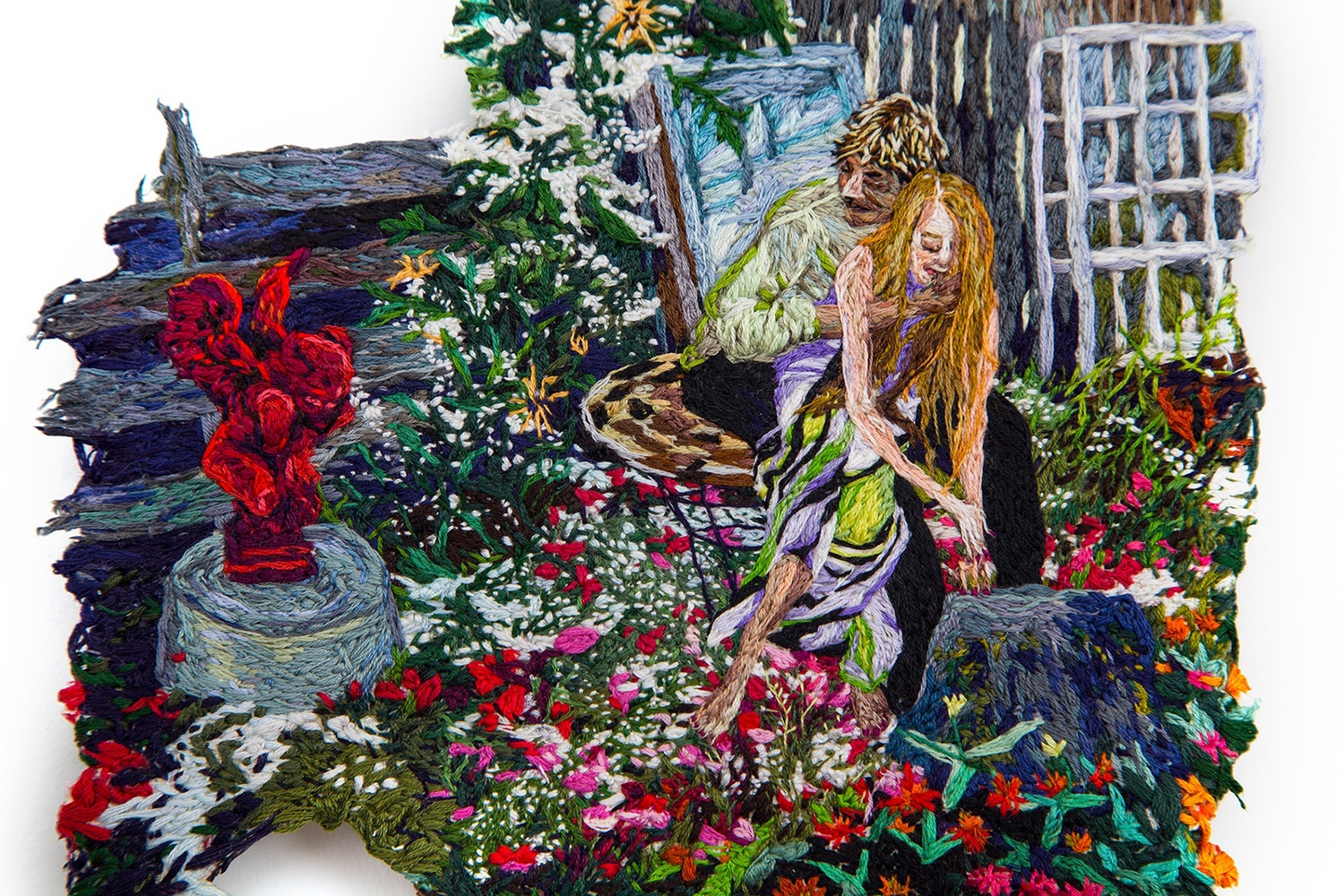 Devil's Fuge (2019), a detail. Photo: Courtesy of the artist and Kohn Gallery

Each piece begins with a narrative before a reference collage is pieced together using images sourced from the internet, reality television, and—pre-quarantine—photos that she stages. From there, Narrett begins to depict the scenes in thread, creating her unique gestural patterns. “I trawl through online databases of free stock images and user-uploaded collectives. My collaging has become more elaborate in the sense that each of the figures are made up of five or more people. I might take someone’s arm or their face or clothing from different images.” 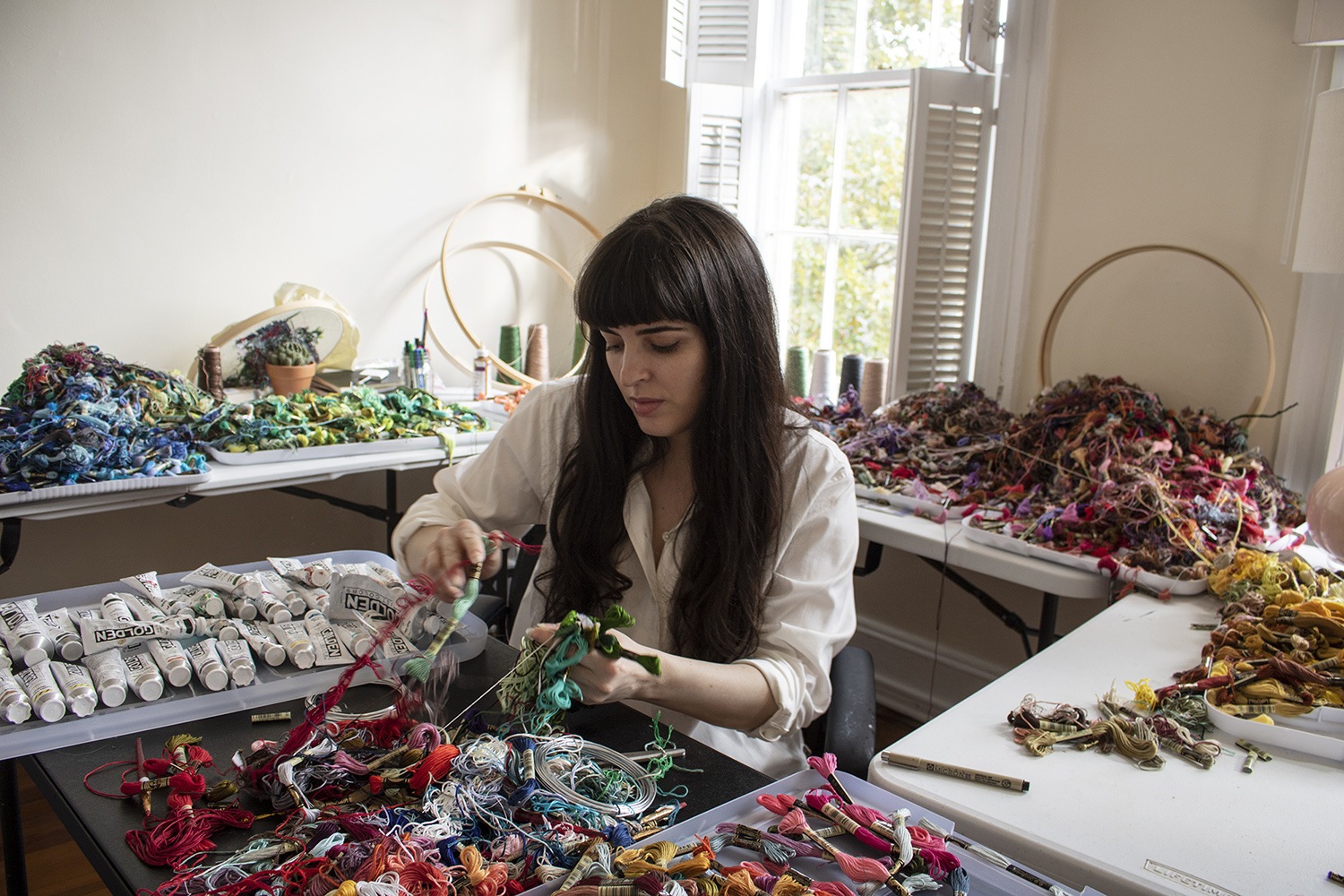 Sophia Narrett in her studio. Photo: Courtesy of the artist 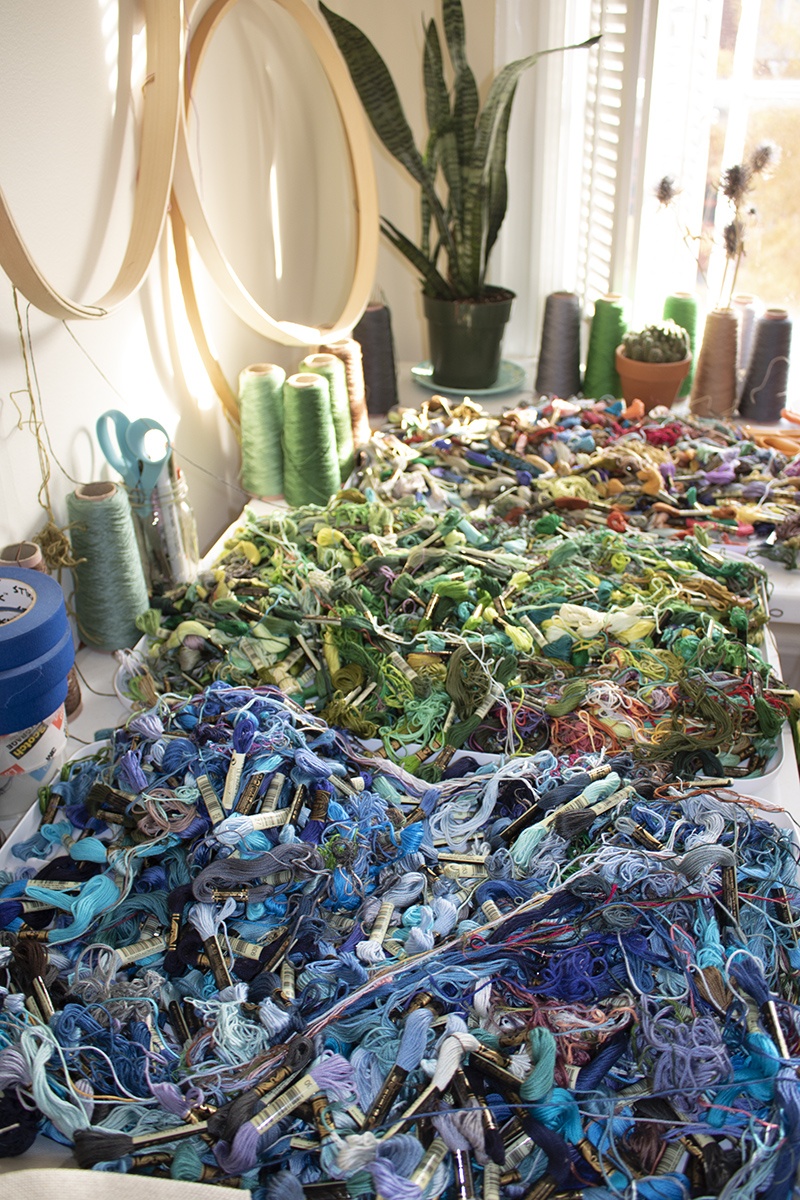 Threads in Sophia's studio. Photo: Courtesy of the artist and Kohn Gallery. 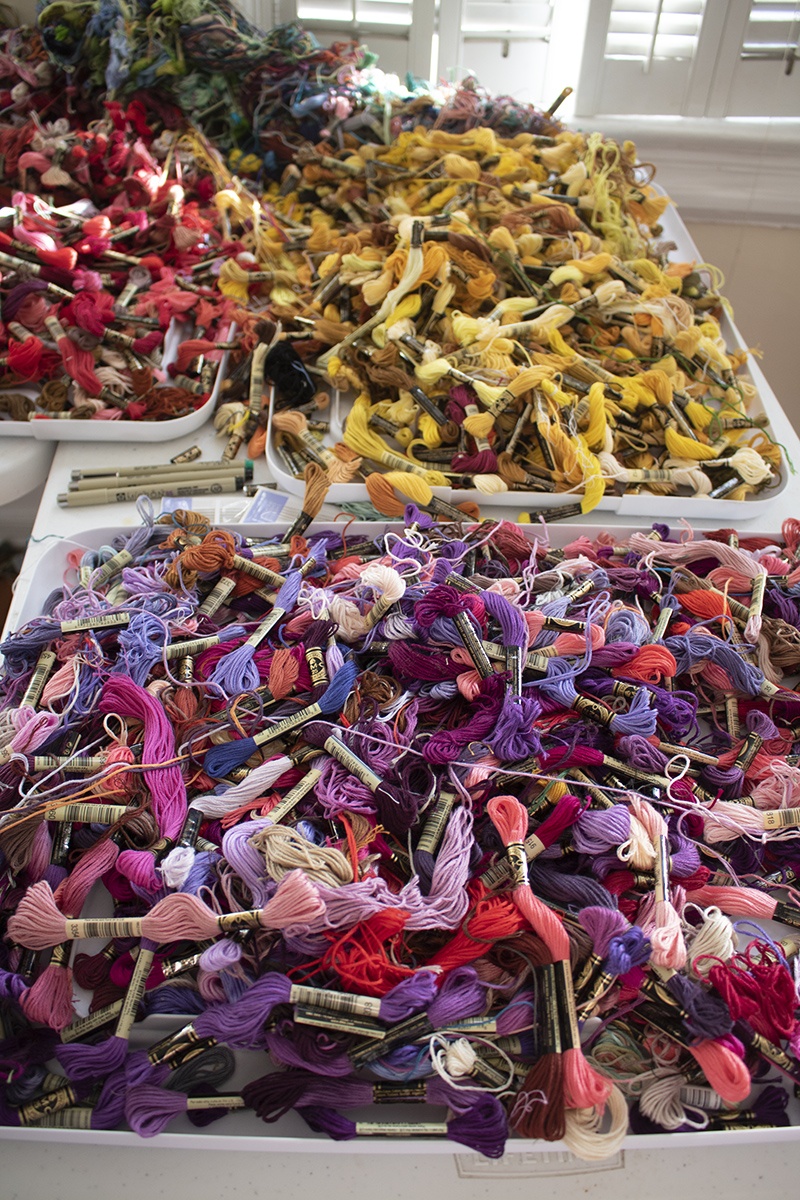 Threads in Sophia's studio. Photo: Courtesy of the artist and Kohn Gallery.

Weaving, of course, has a long and storied history. As Anni Albers once wrote in her canonical 1965 tome On Weaving, “Along with cave paintings, threads were among the earliest transmitters of meaning.” Modern associations with embroidery, however, often call to mind women’s work or craft and may even seem quaint. But like the feminist artists of the 1970s, including Judy Chicago and Faith Ringgold, who subverted the medium and mined craft techniques to challenge assumptions, Narrett’s unique approach encompasses a radical new vision.

Narrett has been recognized by a number of galleries and arts organizations in recent years, too. Following the Galerie award, she was named a finalist for the Museum of Arts and Design’s Burke Prize, which is given to a contemporary artist under the age of 45 working in glass, fiber, clay, metal, and/or wood. Her work as also been exhibited in the Marie-Salomé Peyronnel–curated show “The Role of a Flower” at Brooklyn’s Ostudio. And last fall she had group exhibitions at Smack Mellon in Brooklyn and at PPOW on New York’s Lower East Side. 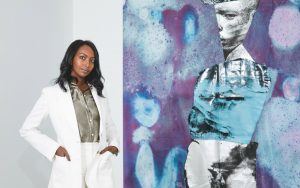 “It’s been a really grounding experience to be able to keep making art because it keeps me in the moment. The works gave me purpose whenever I felt lost or anxious, and sometimes I didn’t even think I’d share them,” she admits. “The experience of making each mark and then letting go of the finished piece is powerful. I hope that people might have their own narrative experience and connect emotionally.”

“Sophia Narrett: Soul Kiss” is on view at Kohn Gallery in Los Angeles, through January 15, 2021.