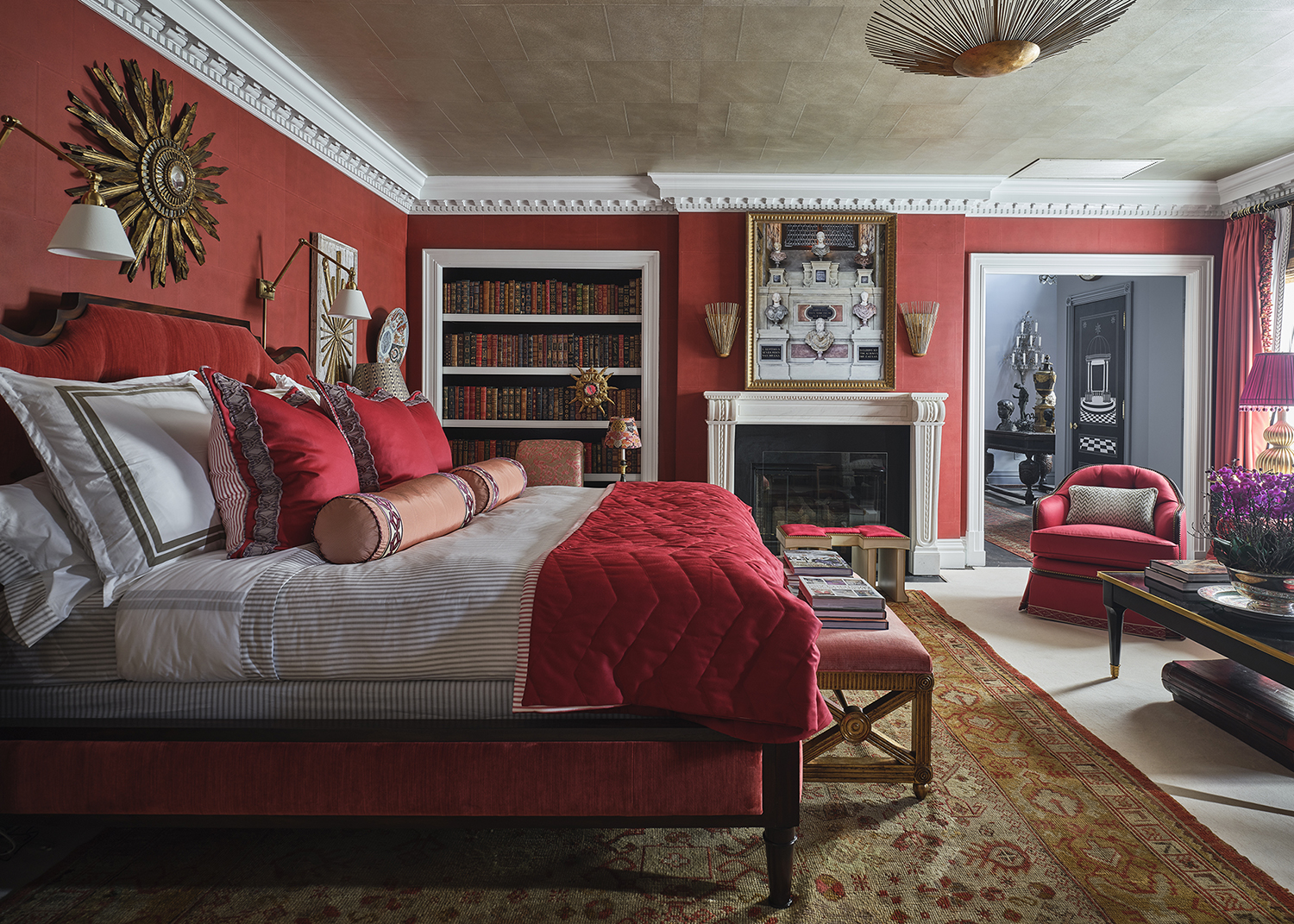 “I wanted to do a red room,” says Alexa Hampton who used a large-scale installation from her new collaboration with Gracie to elevate the bedroom into a sophisticated sanctuary. The designer added a bookcase to balance a double door on the other side of the fireplace with a mantle from her collection with Chesney’s. “I thought that kind of strictness would help relieve the hot, lusty luxury of the red.” Linens with ticking stripe from Hampton’s upcoming collection with Eastern Accents contribute to the room’s structure while numerous sunbursts, including one of her designs for Generation, give the space its softer shapes. 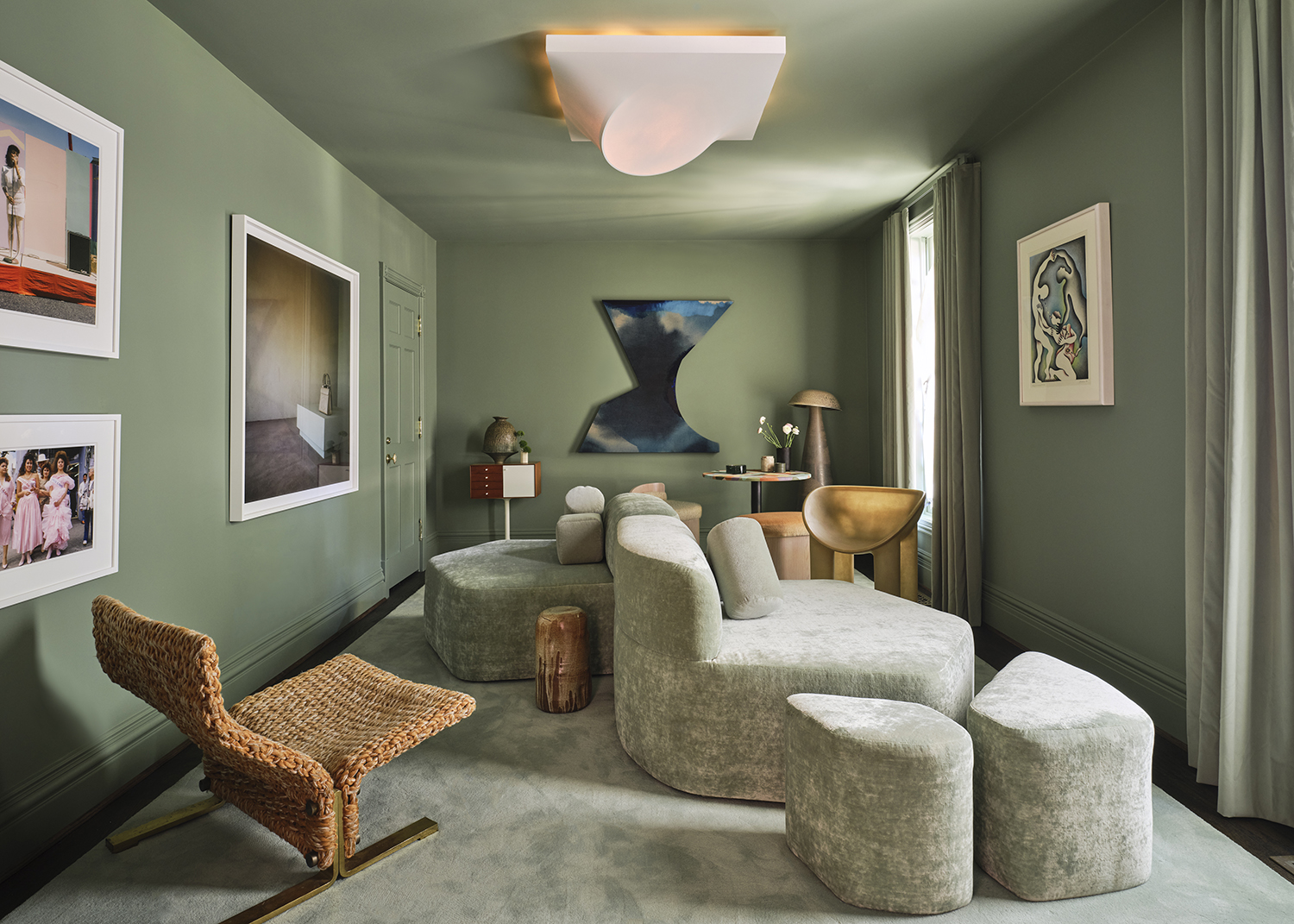 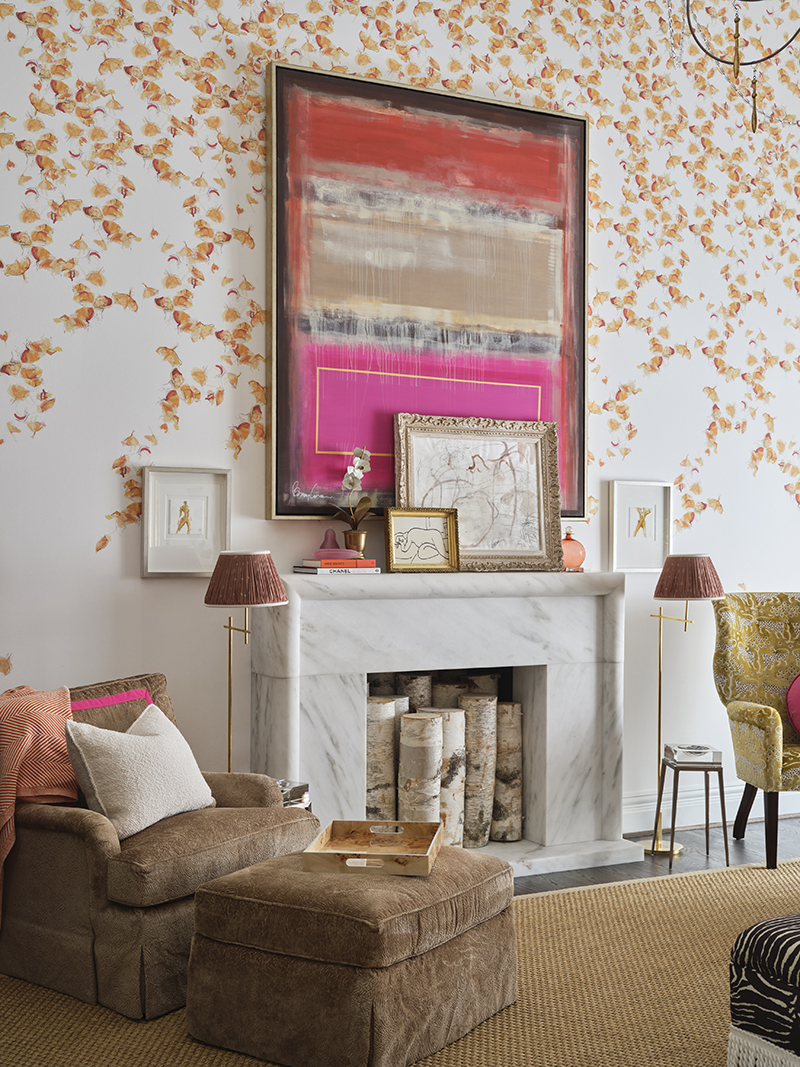 Taking cues from an antique French daybed, the first piece purchased for the space, A. Lantz Design‘s Amanda Lantz conceived a technology-free family room. Here, a large-scale abstract by firm cofounder Barry Lantz has pride of place over the Chad Dorsey fireplace, which is surrounded in a custom Kravet wallcovering of falling ginko leaves. The room’s vibrant color palette was inspired by the family matriarch. “I grew up surrounded by the color pink,” says Amanda. “I love how people look in the color pink, I love how people look in a room that is the color pink—it casts such a beautiful glow.” In an upstairs loft, Pulp Design Studio’s Beth Dotolo and Carolina Gentry conceived a series of rooms entitled “The Wise and the Wicked.” Opening with a dreamy work from home office featuring a rug from The Rug Company, furniture by Arteriors, and Visual Comfort lighting, the space contains a glamorous cabinet that opens to reveal a hidden lair. There, the client can unwind in the bath or “the sinner’s lounge,” that includes a custom Fromental wallcovering of serpents, plus “nods of naughty.” 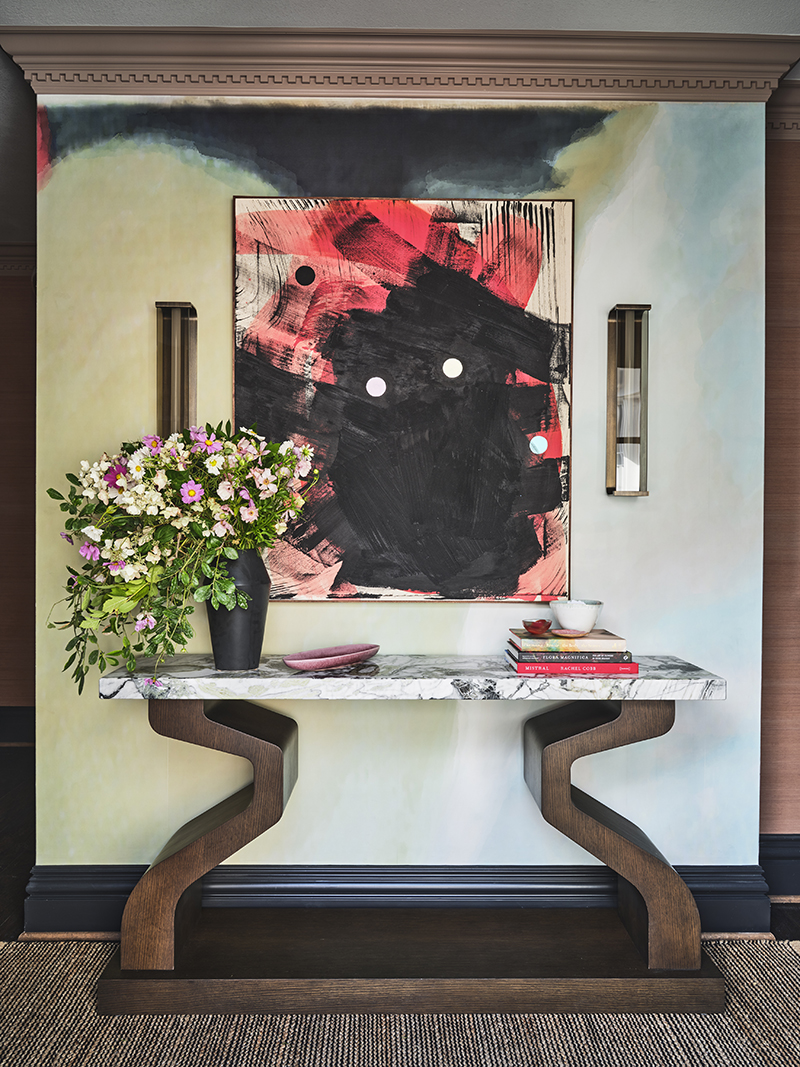 Making her Kips Bay Dallas debut, New York designer Kathleen Walsh created a welcoming space that leads into a multifunctional laundry and mudroom area. “We treated it as a reward for the homeowner,” the designer tells Galerie of the hallway that’s reached from the garage entrance. An FBC London console is surmounted by an artwork sourced from a Los Angeles gallery, Elitis wallpaper, and industrial-chic sconces. “We always like to give tradition a fresh spin.” 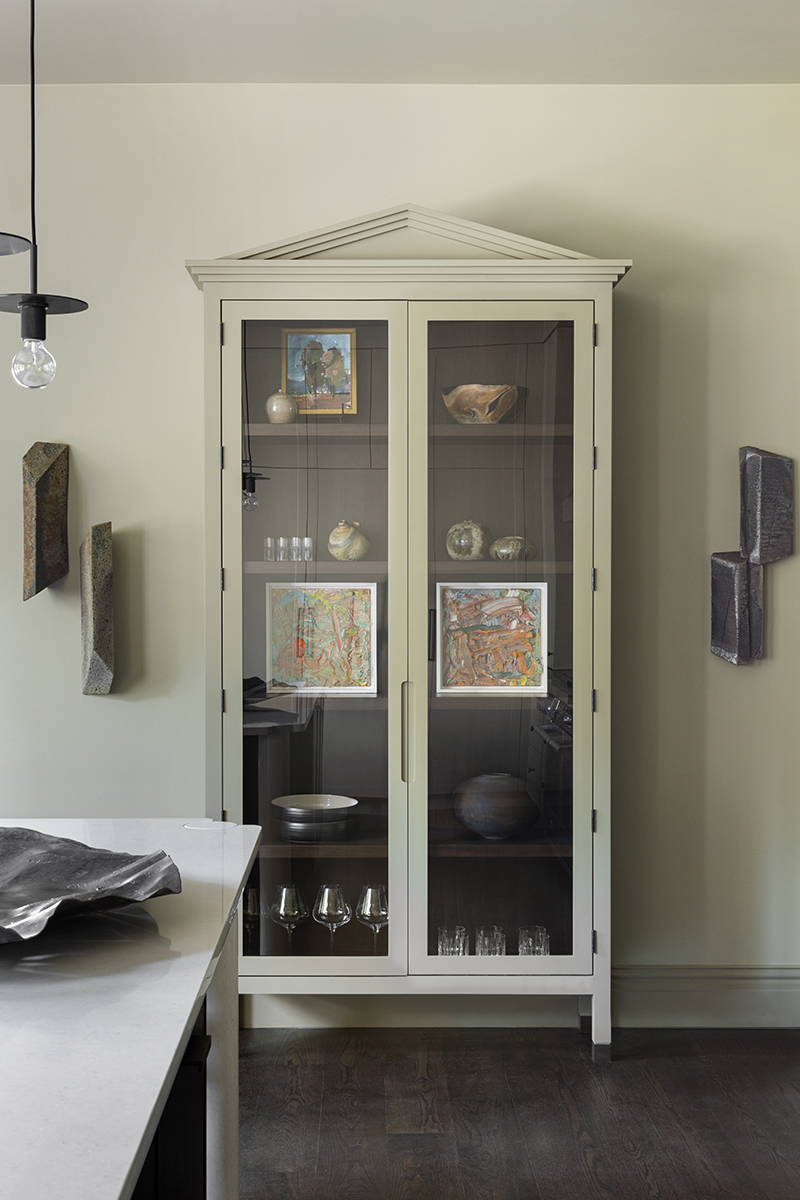 High-tech appliances and a monochromatic palette peacefully coexist in Studio 6F’s custom kitchen, where Cambria countertops are given a custom look with hand-hewn details. A mirrored backsplash reflects the light from the 14-foot window and the trees outside, which influenced the paint color, Benjamin Moore’s Bed of Ferns green. “It brings the nature back inside and brings back the soothing sensibility we were shooting for,” says principal Gil Melott of the room, cheekily entitled “Honey, Tilda Swinton is Coming Home for Dinner.” “This is our effort to bring the simplicity that Tilda Swinton can bring to any wardrobe or character that she plays.” 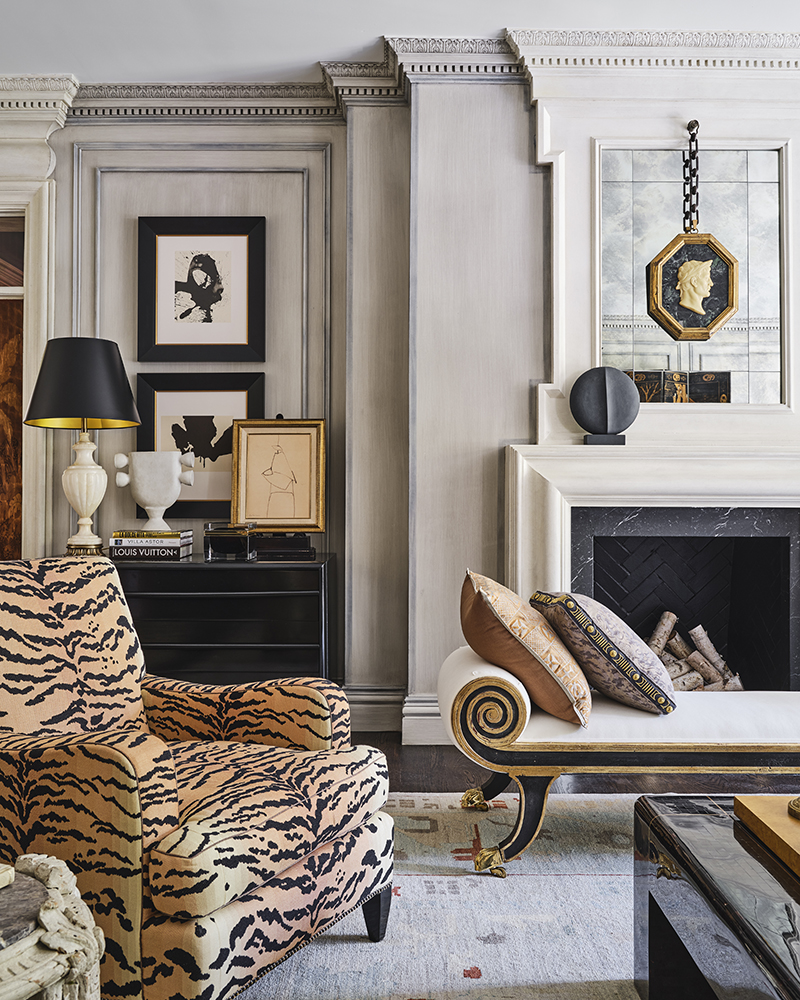 Building on a project he’s currently working on for a client on Embassy Row in Washington D.C., Corey Damen Jenkins used more than 400 yards of Sanderson fabric to construct a tented dining room in the show house’s formal eating area. While the custom Versaille pattern parquet flooring nods to tradition, using multiple quartz tables is a more contemporary approach to entertaining. “I really wanted this room to be that spot where antiquity and modernity meet,” he tells Galerie. A new work by Jason Trotter from Voltz Clarke Gallery enhances the room. 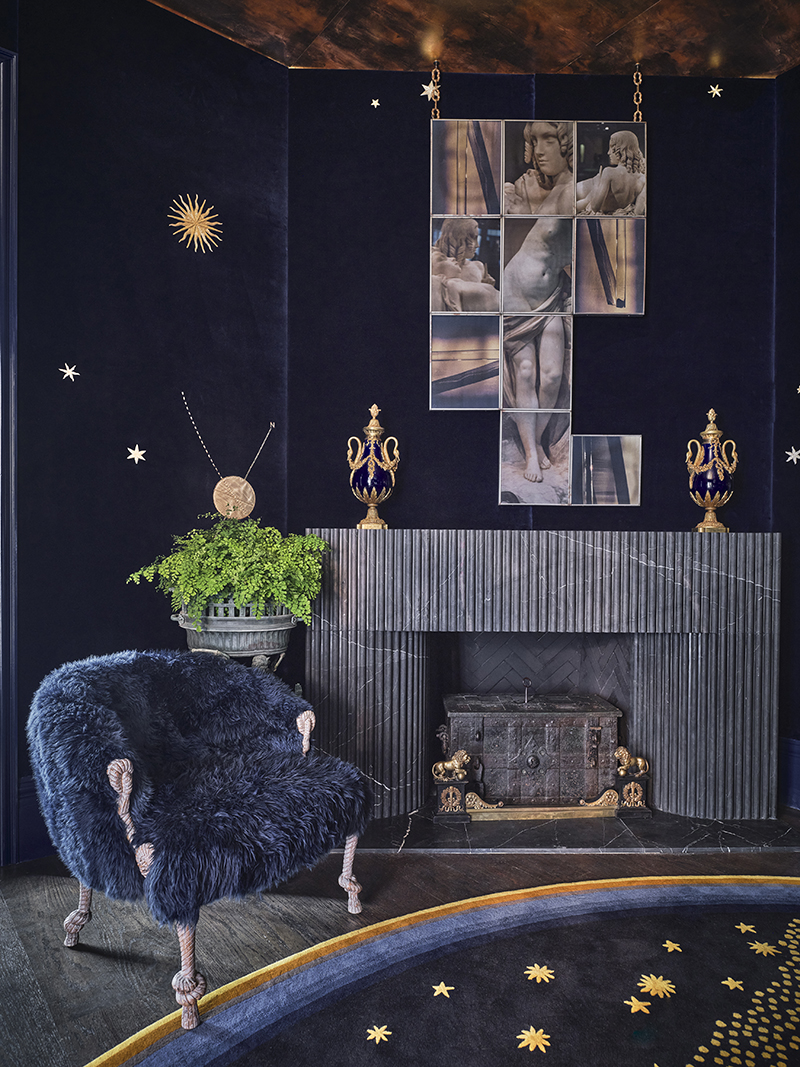 An ambience of optimism abounds across Ken Fulk’s interior and exterior spaces. One lounge pays homage to the Chrysler Building, the Roaring Twenties, and Art Deco with a striking one-of-a-kind De Gournay wallcovering that tells the rite of Spring. In the celestial-themed lounge, embroidered De Gournay wallcovering captures the constellations that will be formed over the show house on opening day. Ken Fulk’s new upholstery collection for Pierre Frey also marks its debut in the room which boasts a striking Lalique Dragon bar and chandelier and starry rug from The Rug Company. 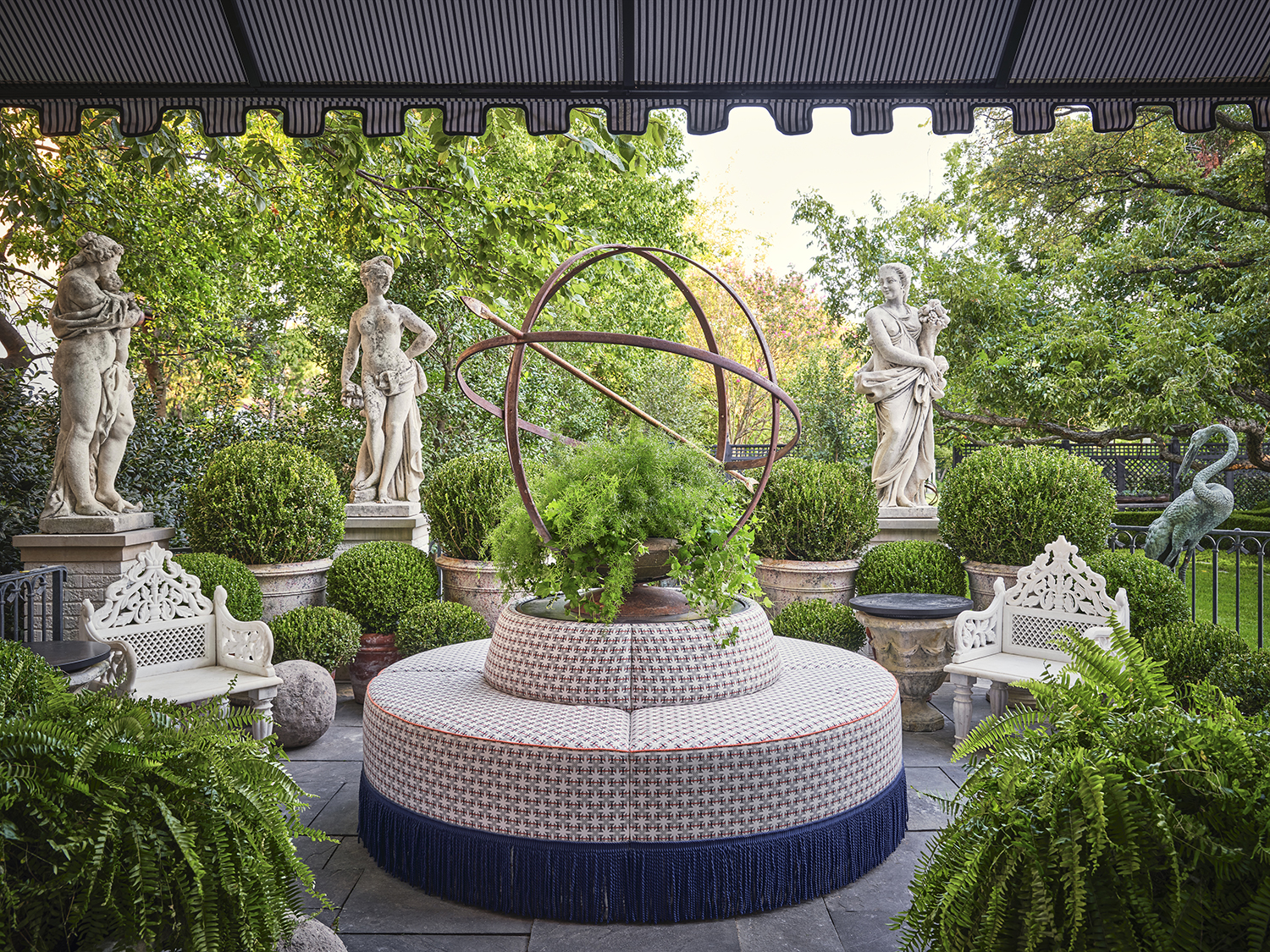 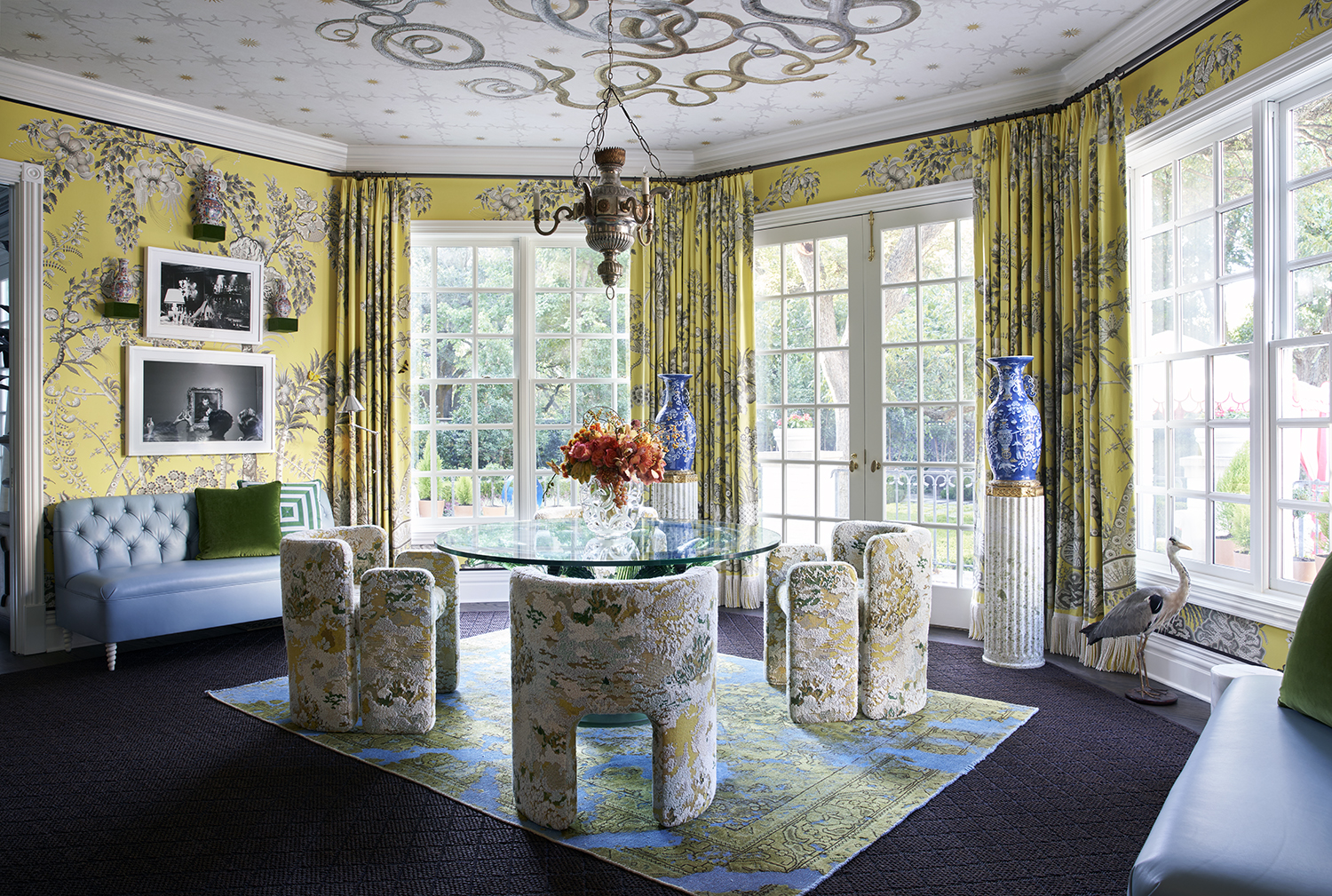 A Jim Thompson Palampore wallcovering and textile paired with a Schumacher wallpaper and MJ Atelier ceiling medallion add to the transportive ambience of the Morning Room, conceived by Houston designer Dennis Brackeen. Antique accents and custom furnishings circle Lalique’s sculptural Cactus table. “It’s nice to add in the modern art and furniture so you get this mix,” says the designer. “With this small space, we just wanted to maximize the storage,” says Dallas-based designer Javier Burkle who created the his and her dressing areas (complete with a built-in bar area). A landscape artwork captures the view from the window while vintage mirrors and newly added architectural details give character to the built space. “We wanted to add as much texture and pattern and color as we could without being overwhelming,” says the designer. “It’s all neutrals but with a lot of fun textures.” 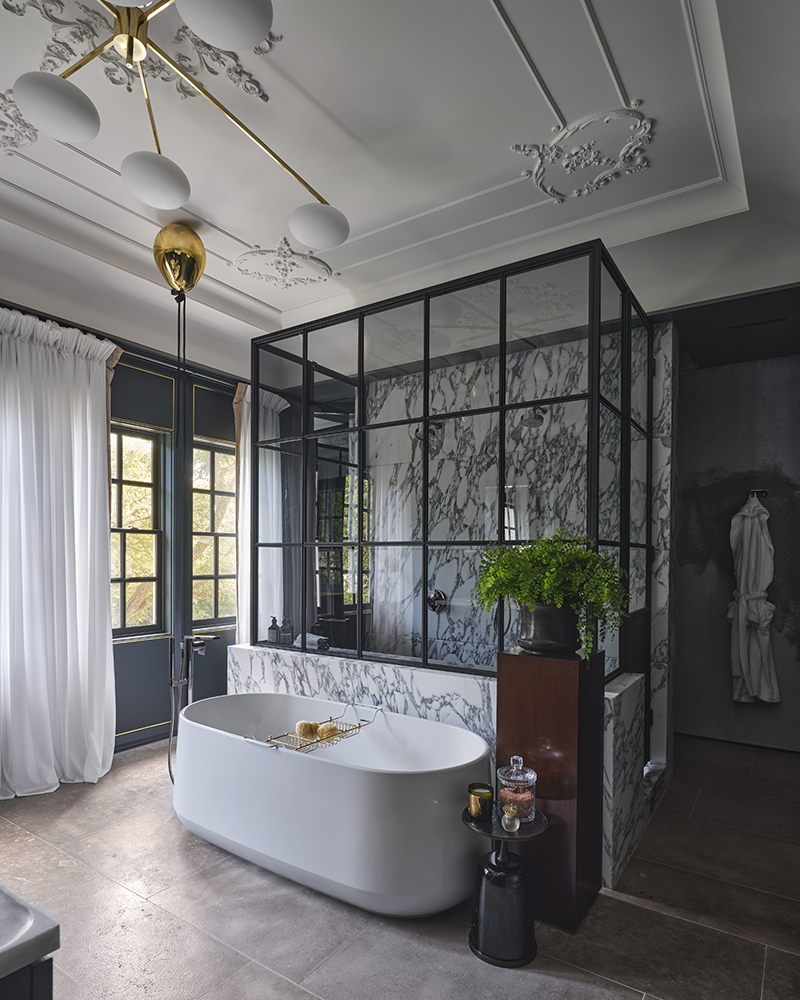 “I love modern design but also appreciate traditional, so with this Georgian house, I thought I’d play that up,” says Dallas-based designer Brant McFarlain, who raised the ceiling over the main bath and paneled the perimeter of the room, before adding gold leaf to meld the two aesthetics. Putting all the functional elements from Kohler in the center of the room allowed the imagined clients to roam, with dual water closets hidden behind panels that align with the back wall when closed. 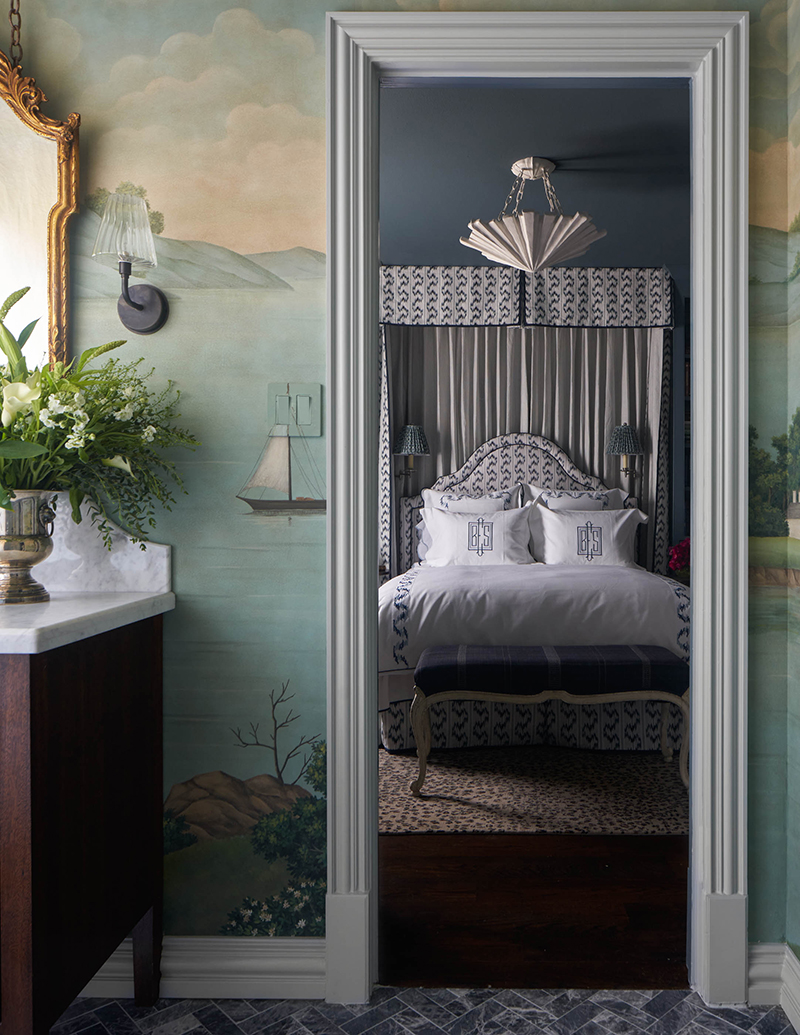 In the “Admiral’s Chamber” guest bedroom, designer Meredith Ellis cultivated a serene sanctuary for a weary traveler. “It was really important that people viewing the room felt that it was very comfortable and welcoming and warm,” Ellis tells Galerie. Inspired by Mount Vernon’s Blue Room, the designer mixed antique oil paintings with modern art, a Stephen Antonson plaster fixture, and an Elson and Company leopard rug. “I wanted to have a little jazz.” 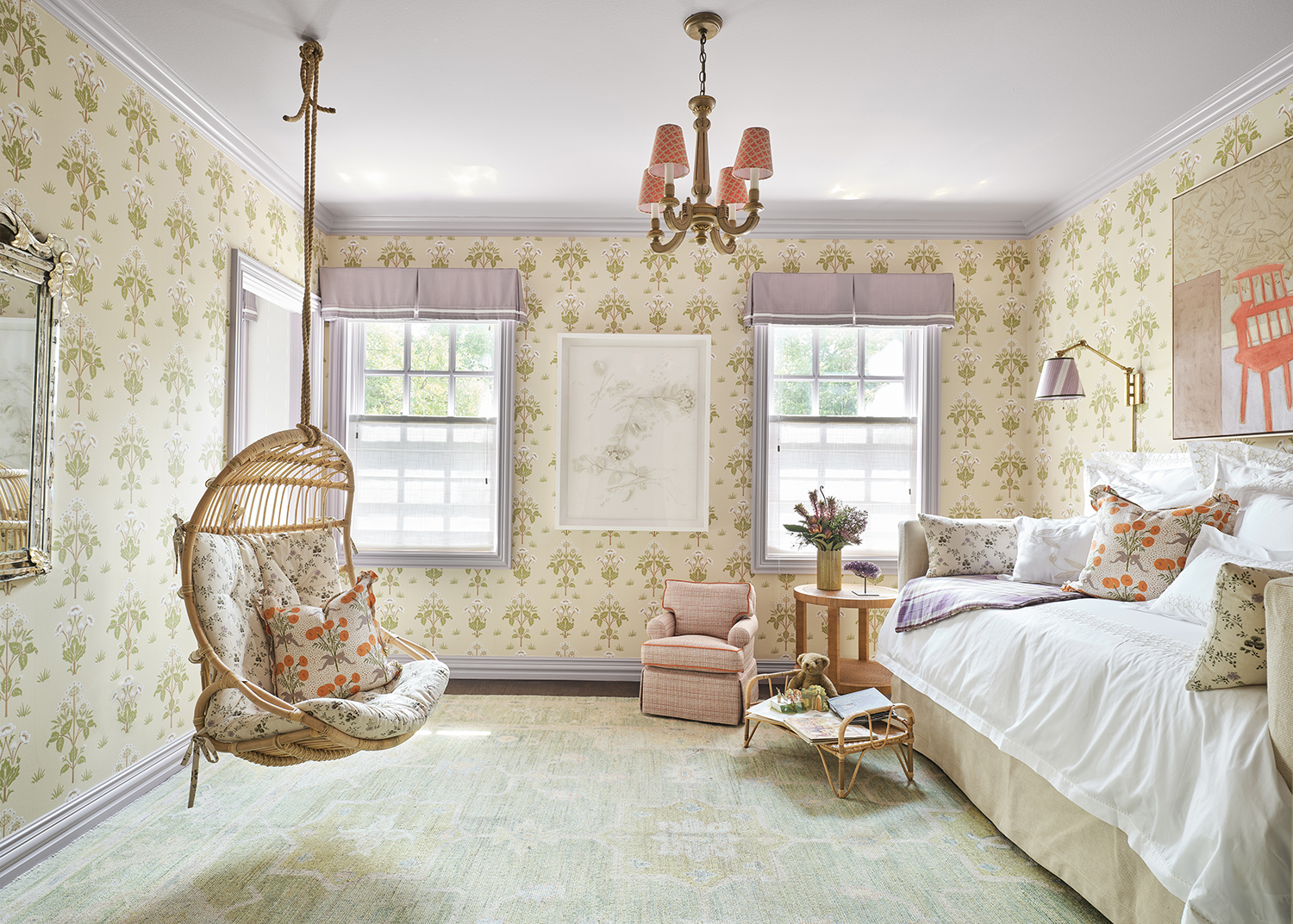 Acorn & Oak’s Shelly Rosenberg crafted an accessible bedroom for a child with Rett Syndrome. “This entire idea was to give her a dignified and sophisticated sanctuary,” says the designer, whose career took a unique turn after welcoming a son with Down syndrome. “It’s a very sweet space, but with the art that was chosen I feel like it’s such a fresh, inviting, and fun atmosphere in a room that she can really grow up in.” In the adapted design, an Alexa device helps control all the functional elements of the adjoining bath while the refreshing wallpaper set the palette for the elevated room that benefitted from Rosenberg’s first experience working with an art advisor. World-traveler Martyn Lawrence Bullard was inspired by Jaipur for his guest suite that features a pair of colonial faux ivory beds, dressed in OKA fabrics, designed in homage to a similar style in the Rothschild collection and a pink lacquer ceiling that channels the city’s famous hue. “I thought I’d leave the wild to others and do something that looked like it really belonged in the house,” says Bullard. A textural Ananbo wallpaper from Paris complements pieces from the designer’s collections with The Rug Company, The Shade Store, Schumacher, and Corbett. In a lower level room with no windows, Yates Desygn’s Bryan and Mike Yates crafted a modern-day speakeasy with a custom suede wallcovering, a cantilevered bar made from Cambria stone, and lighting selected for its similarities to a flapper dress. Elizabeth Fiory Art Advisory helped select the eye-catching artworks by Michael Scott and April Gornik, while a Frame television presents hypnotic digital artwork from Blackdove. Courtnay Tartt Elias combined the aesthetic of the original Moulin Rouge in Paris and the eagerly anticipated film remake with a little Palm Beach and I Dream of Jeannie set design for a wild movie lounge. Wrapped in Voutsa and Aux Aubris wallcovering, the room includes Fleur Home millwork, Circa lighting, and a New Moon custom rug. 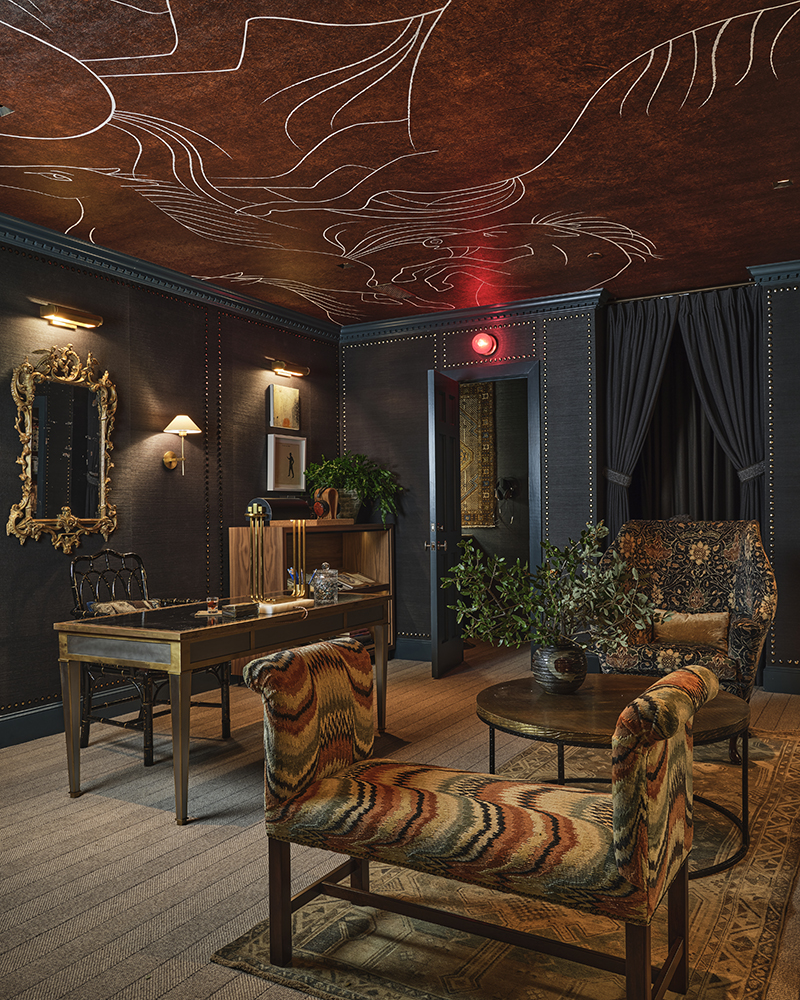 To design a creative space for digital and analog pursuits, designer Janet Gridley built a moody office area as well as a record room and podcast booth. “I was leaning in to the basement idea, making it cozy, and dark and rich and moody,” she says. A ceiling mural of galloping horses pays homage to Preston Hollow’s rural heritage, while the art and accessories give a nod to famous Texans. Austin’s Liz MacPhail built a richly colored wine bar with an oversize Signature Kitchen storage system with room for 700 bottles. Pushing against the general masculine feel customary in wine cellars, the design cultivated a more feminine room, inspired by a still life painting of fruit by Simone Bodmer-Turner and a cheeky work by Tracey Harris. The expansive banquet is upholstered in a Zoffany fabric. Dallas designer Mary Beth Wagner turned a lower level hallway and bath into pleasing place to pause, filling the walls with works Carlyle Lee Wolfe and echoing the geometric design of a Wells Company wallpaper in a custom vanity featuring a natural straw in a chevron pattern. 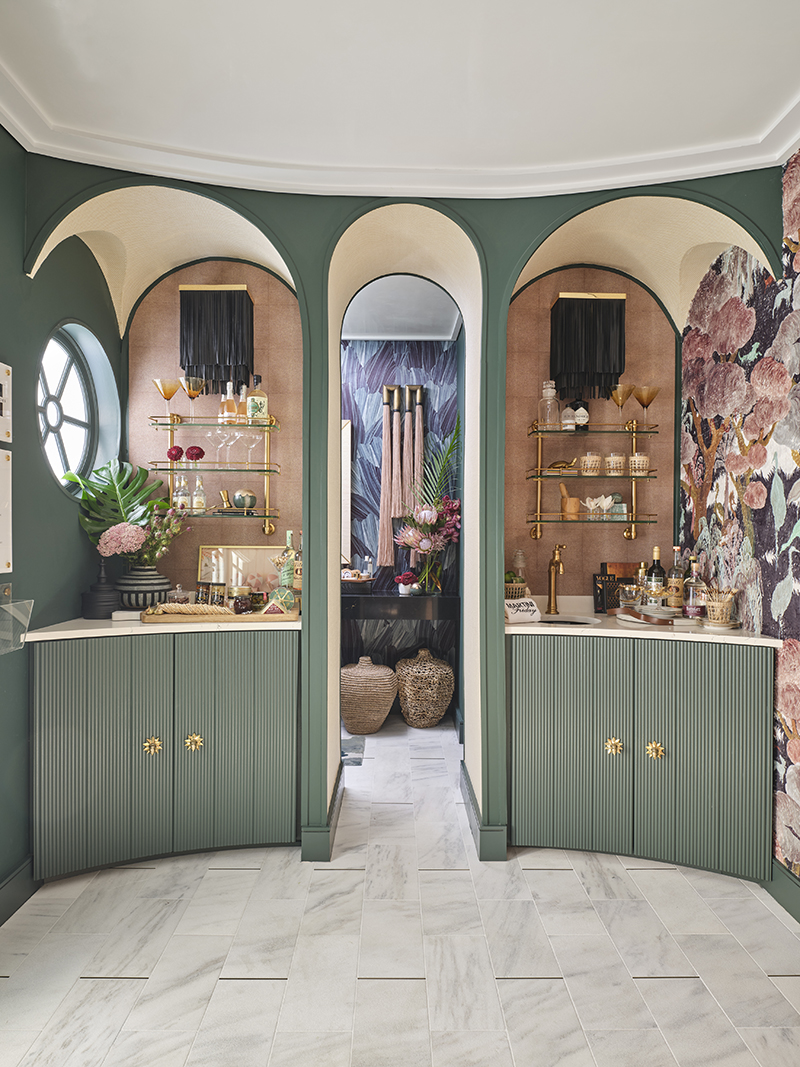 In her “martini muse” area, Dallas designer Traci Connell flipped the floor plan to offer more real estate to a striking bar and turn a back alcove into a secluded bath. “The goal was for the homeowner to come off the veranda and have a place to refresh with a beverage and snack, so we put a lot of emphasis on indoor-outdoor materials,” says the designer, who created the room’s striking arches. Fabrics from Perennials and Fortuny mix with Cambria countertops, however the space’s show-stopping feature is a tactile wallcovering from Arte. “It brought a moody escape feeling to this space.” Playing up the Georgian architecture, From the Ground Up Landscape installed structure English gardens and towering trees. Opposite the entrance, a newly installed courtyard and fountain provides a shady spot to enjoy the afternoon. Inspired by the work of Slim Aarons, Robin Henry added bright pops of color to the pool deck and terrace, even floating a backgammon board in the pool in a nod to the photographer’s famous 1959 image. Loungers and daybeds feature monogrammed Leontine Linens while the dining terrace features floral Pintura Studio textiles on Casamidy chairs and benches. “Part of what I wanted to do was bring the inside out,” Henry tells Galerie. “We want it to be outdoorsy but we wanted it to feel like a real part of our home where we can live and spend time.” 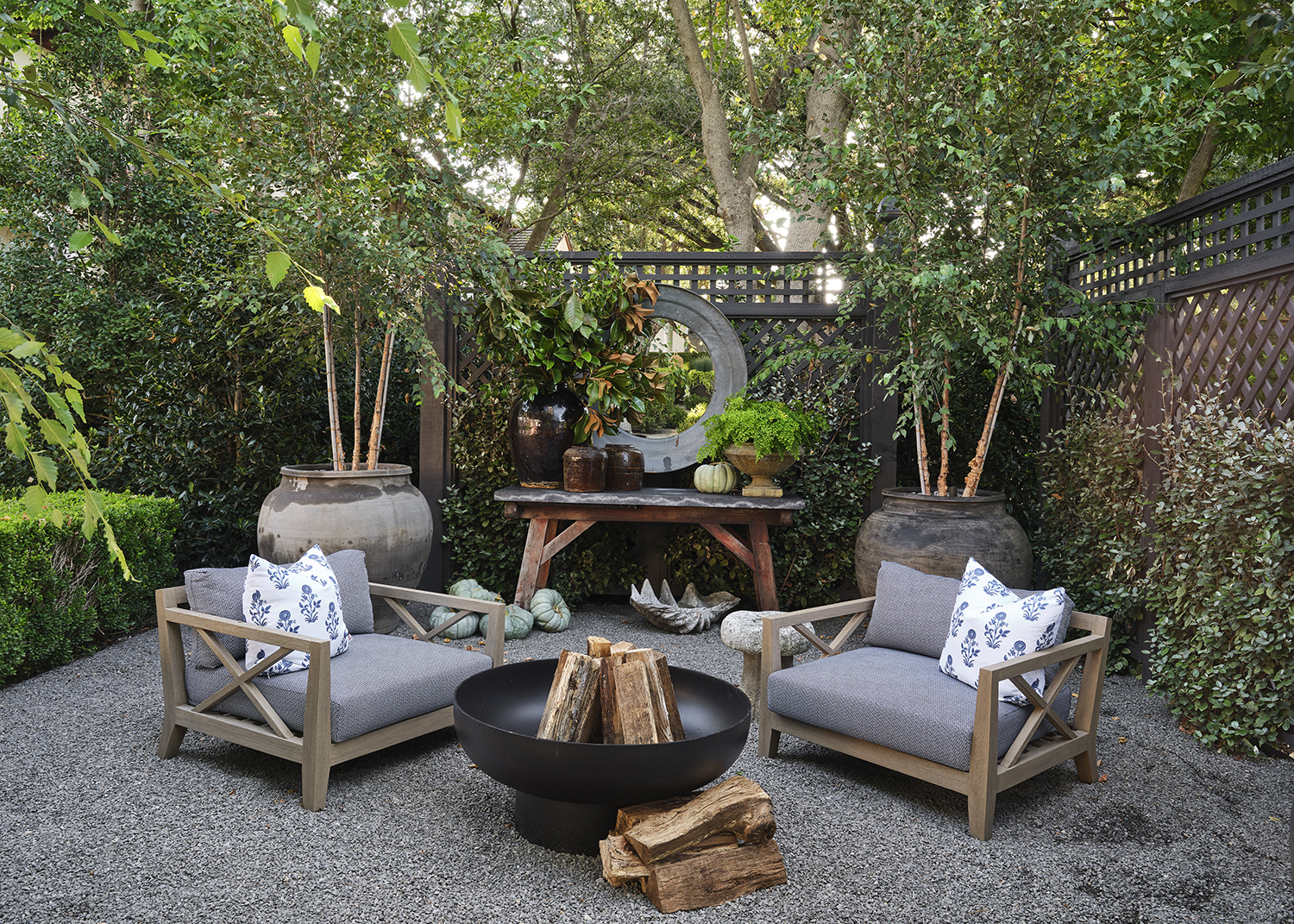 To tame an unruly landscape, Mike Munsterman of Outside used trellis to create separate rooms including an outdoor dining area with a Brendan Bass table and a living area with fire pit and sculpture garden. Then, in a former playhouse, the designer created Jefferson’s Pavilion, inspired by the founding father’s Monticello home, with an office area complete with portrait of Thomas Jefferson by New York artist Mark Gagnon and botanical sculptures by Sourabh Gupta.