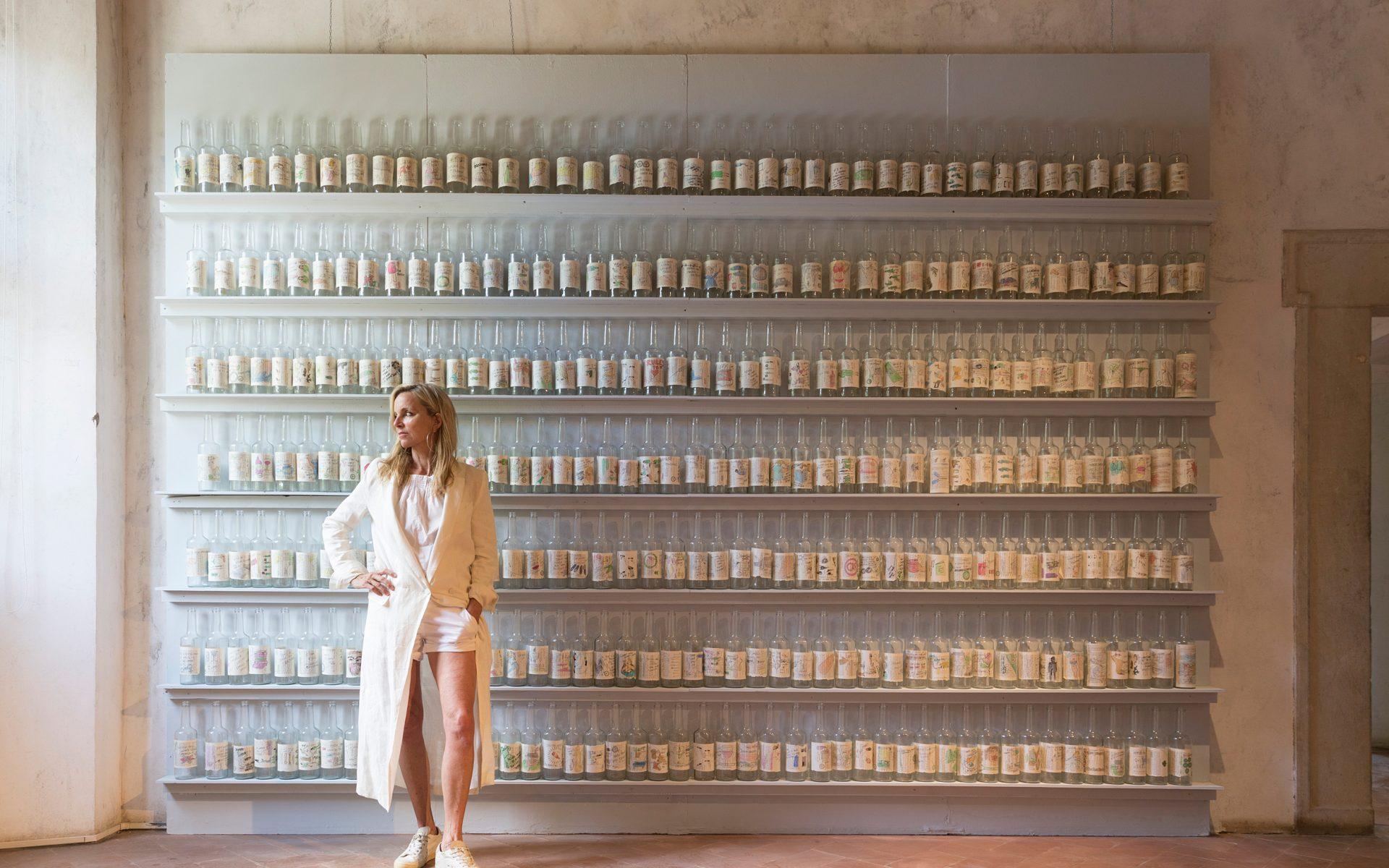 Rachel Lee Hovnanian with her work *Children's Library,* 2012.
Photo: Courtesy of the artist

At the Medici Palace Museum in Tuscany, the artist explores technology, patriarchy, and addiction

The New York–based artist Rachel Lee Hovnanian has been creating multidisciplinary work for decades that deals with her preoccupations with what she sees as the “allied tyrannies” of technology, patriarchy, and addiction.

Her new show, “Open Secrets,” which opens on July 20 at the Palazzo Mediceo, is a retrospective that brings together sculptures, paintings, works on paper, and interactive installations from a number of series she has created over the past ten years, which have been exhibited in galleries and group shows in museums from New York and Dallas to Dubai.

The show, on view through September 15, marks the artist’s solo museum debut, as well as the first time the storied Tuscan property has been devoted to an exhibition of the artwork of an American woman. “It’s no coincidence the curator is a woman,” Hovnanian says, referencing Italian actress Annalisa Bugliani, who curated the show. (Bugliani is also a journalist and the former wife of Mexican film director Alfonso Cuarón.) “She really fought to make this happen for me.”

Mining her own upbringing in West Virginia and Houston, Hovnanian employs a variety of mediums to explore the difference between how people present themselves and who we really are.

The 16th-century Palazzo Mediceo may at first seem like an unusual venue for artwork so preoccupied with contemporary life. But the palace and its gardens—which are a designated UNESCO World Heritage Site—has exhibited modern and contemporary art since 1982.

Cosimo de Medici, Grand Duke of Tuscany and the first member of the legendary Medici dynasty, commissioned the palazzo in the historic town of Seravezza due to its proximity to the famed marble quarries of Carrara. It was those same mines that attracted the classically trained Hovnanian to the region where she has worked for years in a nearby sculpture studio and where several of the works on view were made.

“I’ve exhibited all over the globe, but it’s especially thrilling to have my first solo museum show in a part of the world where I have so much history both professionally and personally,” Hovnanian said, adding that her immediate and extended family has spent much time in Tuscany as well. “I know, love, and respect this part of Italy so deeply.”

Here are some highlights from the exhibition. Hovnanian’s 2014 work Foreplay, a video projection onto a mattress showing various couples’ bedtime behaviors, demonstrates how smartphones have hijacked intimacy. Lit only by their phone screens, each person scans and scrolls relentlessly, too enraptured by their devices to interact with each other as the tune “Isn’t It  Romantic?” plays audibly from an old rotary phone in the exhibition space. Foreplay is best viewed in conjunction with two nearby mixed-media installations that also address technology as alienation: Dinner for Two, her 2012 work in which two lovers “dine together,” each appearing as an image on a tablet situated across a hyperbolically long dining table, and In Loco Parentis, a 2014 piece where a tablet bearing a projection of a toddler is strapped to a high chair surrounded by a mess of Cheerios. A number of artworks build on a series related to alcoholism and childhood trauma that the artist first presented in three back-to-back solo gallery shows at Leila Heller Gallery in New York last year. In addition to a series of subtly haunting paintings in muted pastels with phrases like “Johnny Walker came to visit,” there are several poignant and pointed installations, like Hovnanian’s installation Children’s Playroom or her sculpture Children’s Wagon—an antique toy wagon filled with “empties,” referencing at once the common idiom of falling “off the wagon” and the impact a relapse would have on a child.

Empty bottles, rather than books, also line shelves in her work Children’s Library. Here, the artist has replaced the label on each empty with a page torn from the 1947 Girl Scout handbook, whose old-fashioned, gender-specific “survival guide” Hovnanian has satirized with her own illustrations in watercolor and ink. Also installed outside is the nearly 11-foot tall Carrara marble Beauty Queen Totem from Hovnanian’s 2009 exhibition, “Power and Burden of Beauty.” With her crown, gown, and sash, the beauty queen reigns atop a victory platform that evokes a wedding cake. She is “perfect” yet blank and ramrod straight—a stony statue suggesting that “winning” means being a miserable, perpetual contestant. A resin version of the work, on the same scale, peeks from inside a gated closet inside the museum, suggesting entrapment. Both relate to photographs from the same series (also inside) showing the queen in uncomfortable situations, like gazing at a case of off-limits doughnut or looking at her own reflection in a mirror  (surrounded by trophies) with a cosmetic dermatology needle sticking Frankenstein-like out of her head.

What will no doubt be the Instagram sensation of the show is a brand-new work, which the artist completed this week: Hovnanian has emblazoned a traditional, three-wheel Italian utility truck with the image of the “dying battery” icon and the acronymic FMLMBD, standing for “F*** My Life, My Battery’s Dead.” Inside the Wi-Fi-enabled, ambulance-like vehicle—parked on the palazzo grounds—people are invited to resuscitate their “dying” devices at a specially designed charging station marked with medical red crosses. The truck’s interior is illuminated by Hovnanian’s neon work FMLNW (F*** My Life, No Wi-Fi), which she debuted in an interactive installation at New York’s Armory Show in 2015. Following the exhibition opening, the truck will travel from town to town in Tuscany.

Cover: Rachel Lee Hovnanian with her work *Children's Library,* 2012.
Photo: Courtesy of the artist
Next Post