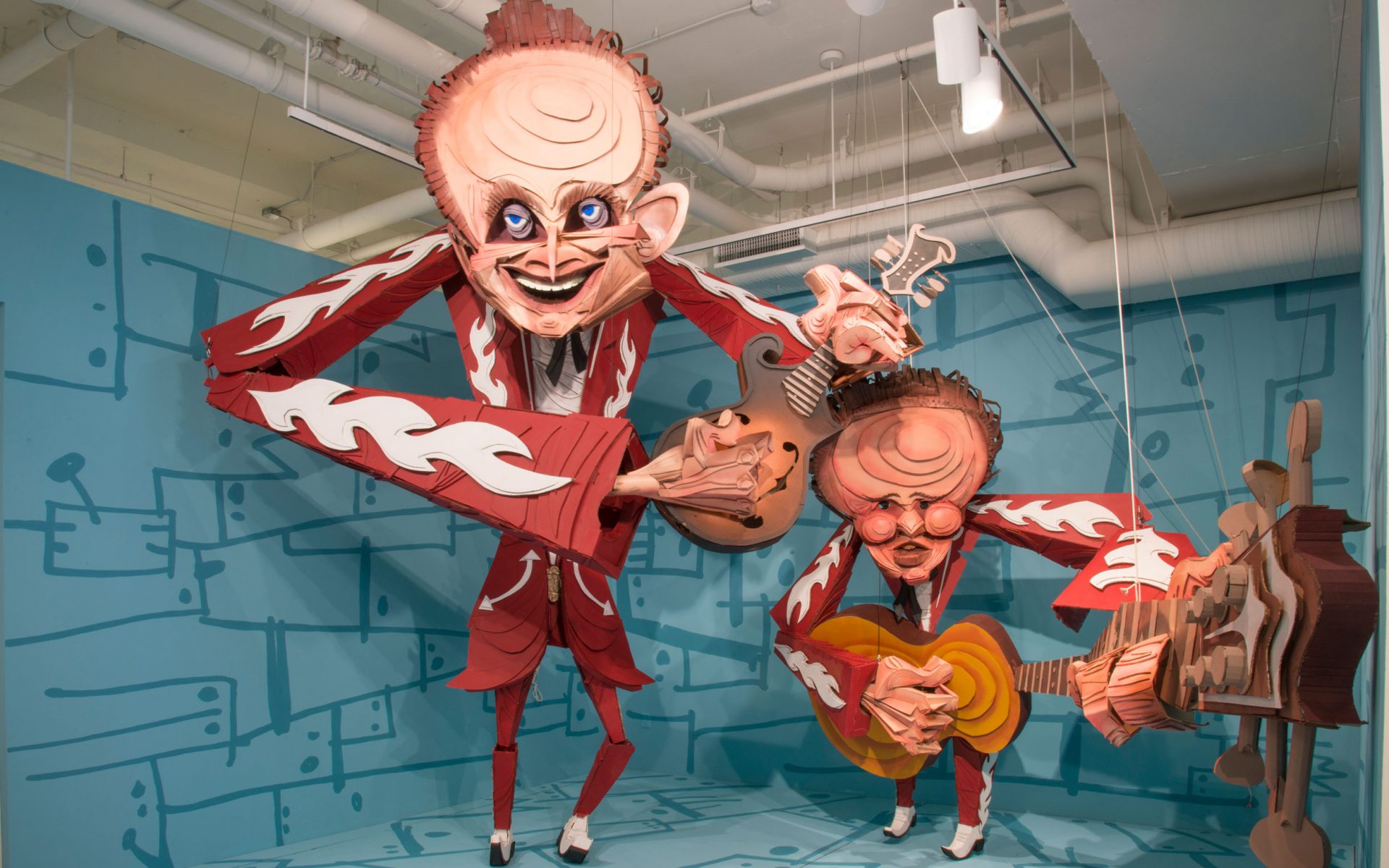 “I like to see my pictures come alive,” says artist Wayne White about his paintings. While the sentiment of White, who is slated to present work with Joshua Liner Gallery at the Seattle Art Fair, has been echoed by artists from time immemorial, few have probably meant it quite so literally as he has. After all, White’s claim to fame was designing sets for Pee-wee’s Playhouse, the hit late-1980s show filled with psychedelic imagery and puppetry was nothing if not “alive.”

White’s paintings, which now count some significant collectors, including Beth Rudin DeWoody, as fans, hark back to his earliest days as an artist. It was the Tennessee native’s medium of choice when he was an art student in his home state, embarking afterward to New York in the early 1980s. He struggled as a freelance cartoonist for some time before getting his big break on Pee-wee’s Playhouse—what he calls “the greatest job in the world.” Wayne White, The Bootkicker, 2014. Photo: Courtesy of the artist and Joshua Liner Gallery

Learning everything on the job (“I was faking it,” he jokes), White nonetheless took home three Emmys for his delightfully uncanny, mechanically ingenious creations. Add to that a Billboard award for best art direction in a music video (Peter Gabriel’s “Big Time”), a stint designing the set for the Smashing Pumpkins hit “Tonight Tonight,” and roles on a plethora of other productions (Riders in the Sky, The Weird Al Show, Beakman’s World, and many more), and a picture of a diverse and fruitful career emerges.

Though he eventually left the television industry to pursue artistic freedom, White’s artistic methods haven’t exactly changed—just evolved. “I still love to do giant puppets and environments,” he told Galerie in a recent interview. “The puppets themselves become like architecture; they’re the synthesis of sets and puppets.”

For the Seattle Art Fair, which kicks off Thursday, this will translate into a pair of 14-foot mobile figures based on Mary Ann and Louisa Boren, the indomitable pioneer sisters credited with the 1851 settlement of Seattle alongside some two dozen others. The fair’s new artistic director, Nato Thompson, commissioned the work. “I knew him casually,” says White. “He’d seen some of the big puppets at the Art on Paper fair in 2015.” “They seem a little forgotten,” White says of the women, who, history has it, prevented an untimely fate for their party of settlers when their hired boatmen had had too much to drink near the treacherous Cascade Falls. “They seemed so resolute and smart. I was struck by their energy and their intelligence.”

Entitled Here Come the Boren Sisters, the monumental display will be interactive. Viewers can pull on a rope, and the puppets will curtsy up and down. Though the final installation won’t be unveiled until the fair kicks off, White recently gained traction on Instagram with a functional cardboard prototype.

New York–based Joshua Liner Gallery will be exhibiting the installation along with ten paintings that White made specifically for the fair. The “word paintings,” as White calls them, incorporate bold acrylic text, often colloquialisms, into scenes from found landscape lithographs. His unapologetically deadpan approach has gotten him compared to American artist Ed Ruscha and was the key to earning his earliest solo shows in Chelsea and a collector base that includes designer Todd Oldham as well as deWoody, whom he credits with being an early champion who helped kickstart his career. Wayne White at the Joshua Liner Gallery with They Plundered Our Art and Then Waited and Watched from the Ridge as We Made More, 2017. Photo: Christos Katsiaouni

That approach is part of his stated mission to bring what he calls “real life” humor into fine art, something that was explored in Beauty Is Embarrassing, a documentary on his life directed by Neil Berkeley. Other recent career highs have included a 30-year retrospective at the Hunter Museum of American Art (“That was fantastic”) and a yearlong installation called Wayne-O-Rama in Chattanooga, which showcased White’s colossal caricatures of famous and historical Chattanooga locals like actor Samuel L. Jackson and Blues singer Bessie Smith, drawing visitors from across the globe to the city in the foothills of the Appalachian Mountains.

If there’s a secret to success in all this, White claims that it’s finding a good boss. “Paul Reubens [of Pee-wee’s Playhouse] was the best boss,” he says, “because he gave us all a lot of artistic freedom on the show.” And while Peter Gabriel was “great,” he says that the best boss is oneself.

“When you’re your own boss, you get to put out your individual vision,” he says. While that may not have been the easiest situation for a young cartoonist grappling to get by in 1980s New York, it laid the foundation for the prosperity to come.

“I’ve always been a freelance professional,” he says. “I’ve always hustled by selling pictures. Now, for people to enjoy on their wall—it’s every artist’s dream.”