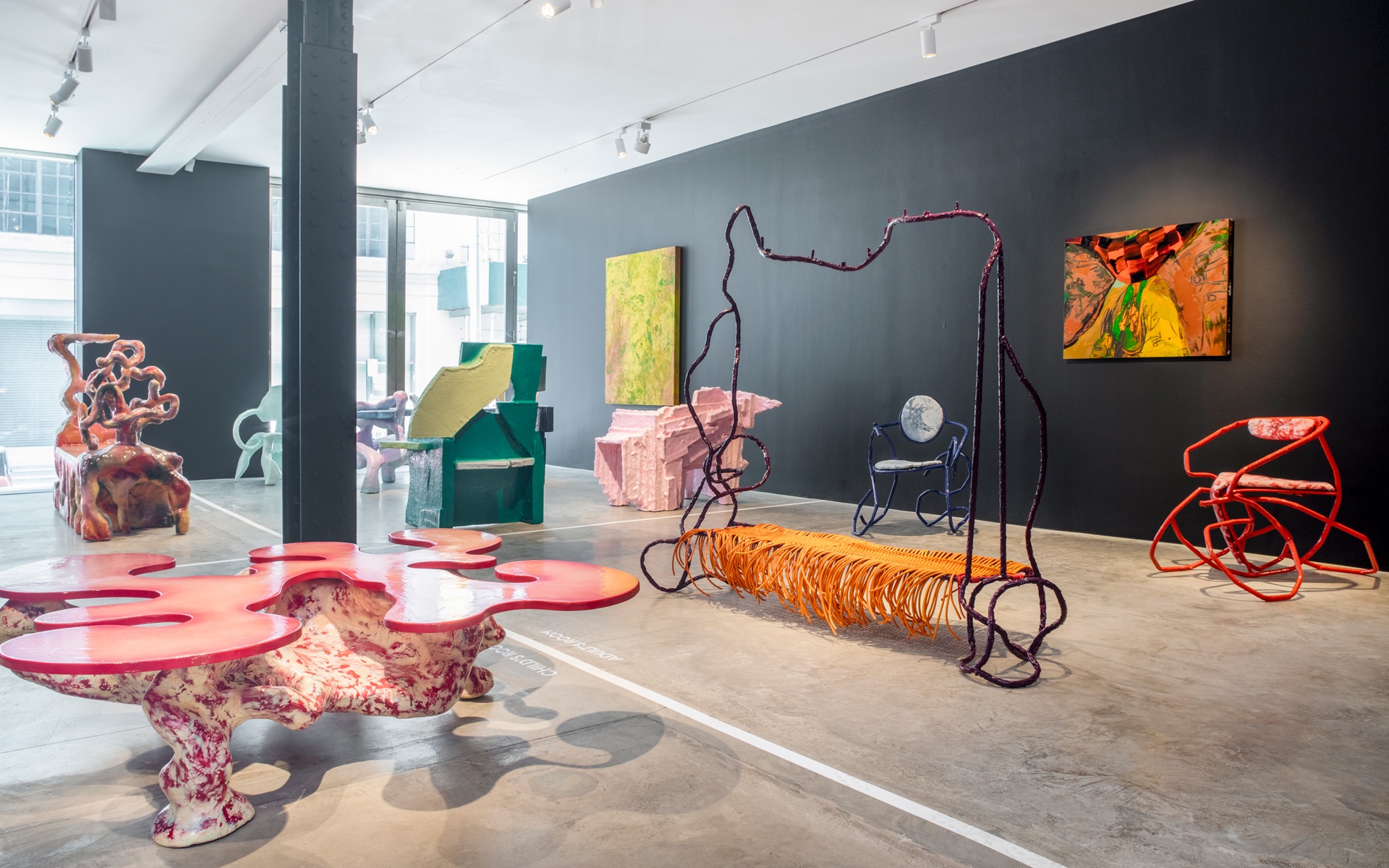 These Otherworldly Furnishings by Designers OrtaMiklos Were Created Entirely in Quarantine 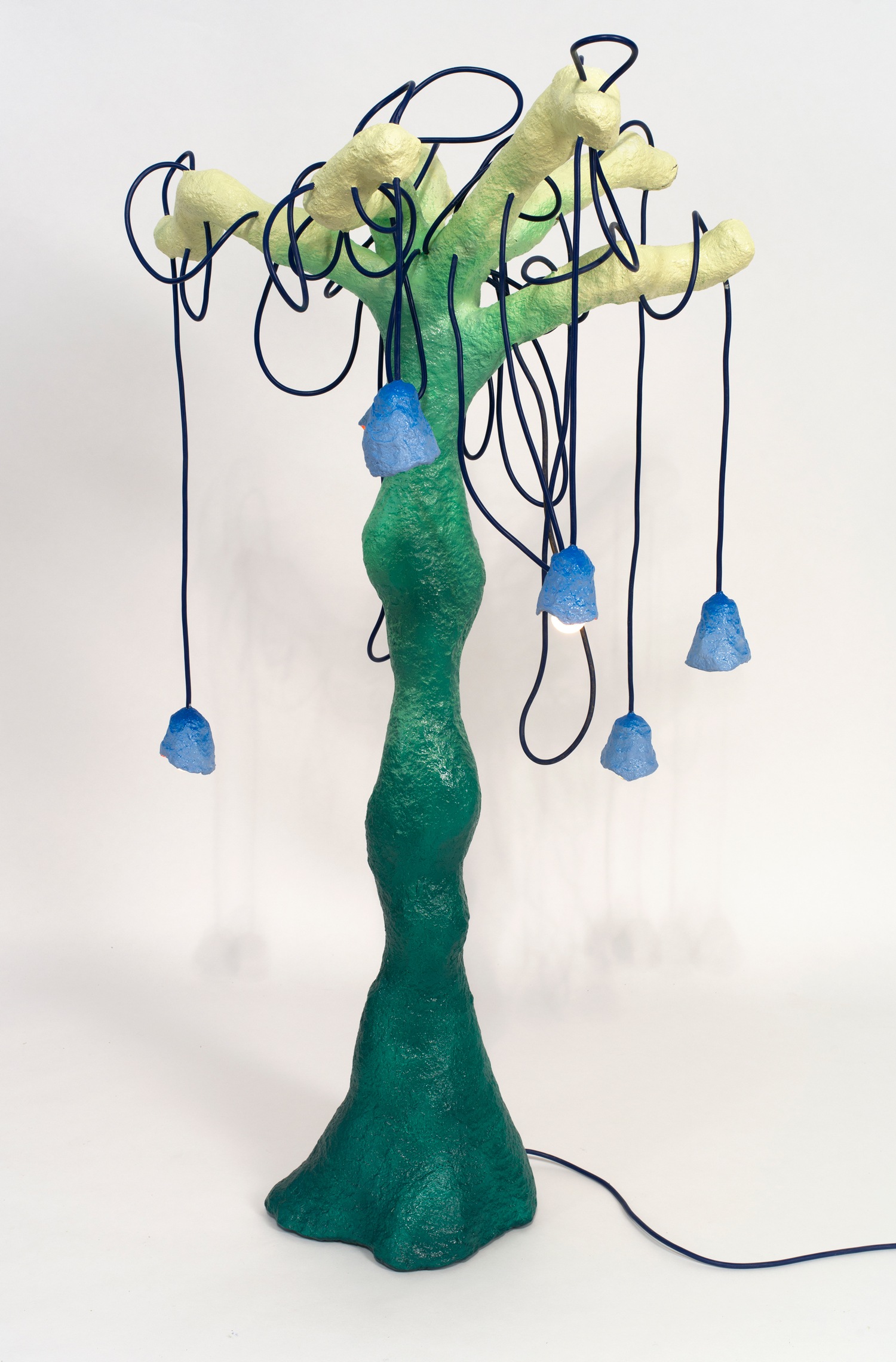 When France went into lockdown in February, Leo Orta and Victor Miklos took refuge in the historic commune of Boissy-Le-Châtel, about an hour east of Paris. The buzzworthy designers, who formed OrtaMiklos in 2016 after meeting at the Design Academy Eindhoven, invited two interns and an assistant to shelter with them at their cavernous studio, a former mill with plenty of breathing room—both indoors and out.

The following two months saw the team produce a slew of surrealist-inspired lamps, chairs, tables, and other functional works that have just made their debut at New York gallery Friedman Benda. Open to the public through July 31, “6 Acts of Confinement” is the Franco-Danish duo’s first U.S. solo show. Last summer, OrtaMiklos made waves at Design Miami/Basel, where Berlin’s Functional Art Gallery showcased their colorful furnishings, which recall the irreverence of Gaetano Pesce or Maarten Baas.

While undoubtedly unsettling, the long months of confinement forced the team to think outside the box. “Because there was not a lot open, we had change the way we produced things,” Orta tells Galerie. “We used what we had in the house—nothing was outsourced.” Materials included a large amount of polished iron from a project for Kaleidoscope magazine, plus whatever wood, steel, and cardboard was lying around the workshop. “We got to dive deep into developing our own techniques and experimented with a lot of new directions,” adds Miklos. “We trusted each other that something would come out of it.” 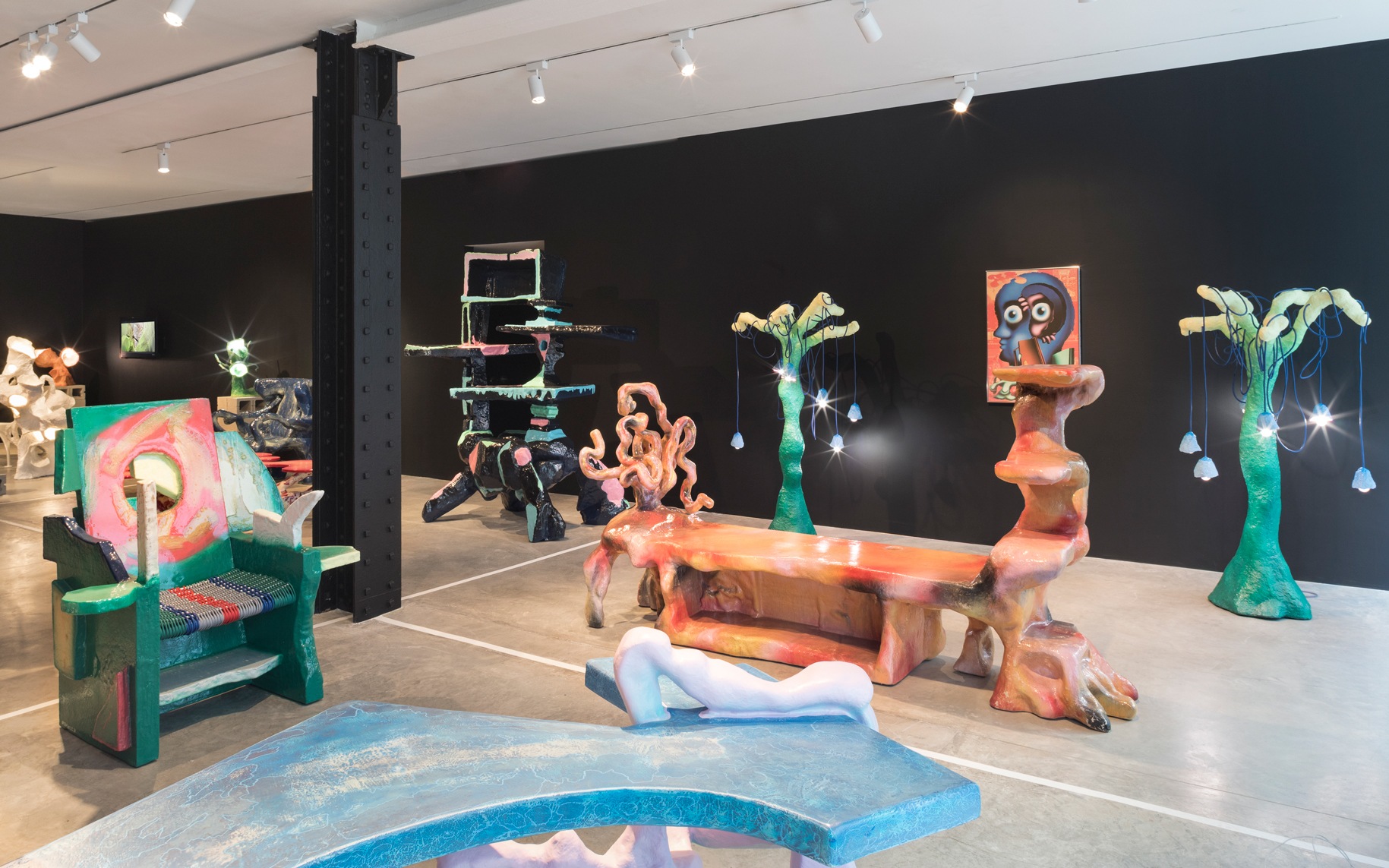 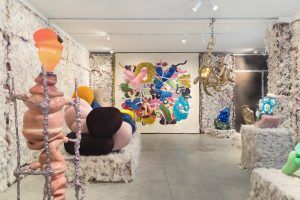 The imaginative pieces they created are rendered in a riot of vivid hues, with shades of scarlet, peach, and pastel pink blending together on Morphosis TV Bench, a favorite of both designers. Part seat, part shelf, the piece is an amalgamation of styrofoam, fiberglass, polyester resin, spray paint, crayons, and lacquer. Shiny table lamps resembling rough coral polyps come in gradients of tangerine, emerald, crimson, and pale turquoise. And a pair of spindly chairs expand upon the work of Marcel Breuer and Michael Thonet, with their powder-coated steel bodies seeming to melt into twisting silhouettes. “Every piece has different steps,” says Miklos, “but the first act is often distorting the materials and when you feel like something is going on, you just go with it. There’s a subconscious flow.”

The resulting show reimagines the home as an emotional wilderness, splitting the gallery into six different rooms demarcated by lines on the floor—Office, Adult’s Room, and so forth. “They all represent a different approach to confinement,” explains Orta. “The Child’s Room, for instance, was inspired by Maurice Sendak’s Where the Wild Things Are and has all of these the monster pieces that we made.” To activate the two-dozen sculptural furnishings—and nodding to their past guerrilla performances—the pair commissioned six New York artists (among them Reginald Sylvester II and Sarah Faux) to create or loan works to adorn the walls of each of the scenes. “We wanted to share another point of view of what was going on during confinement and bring in the voice of other fields.” 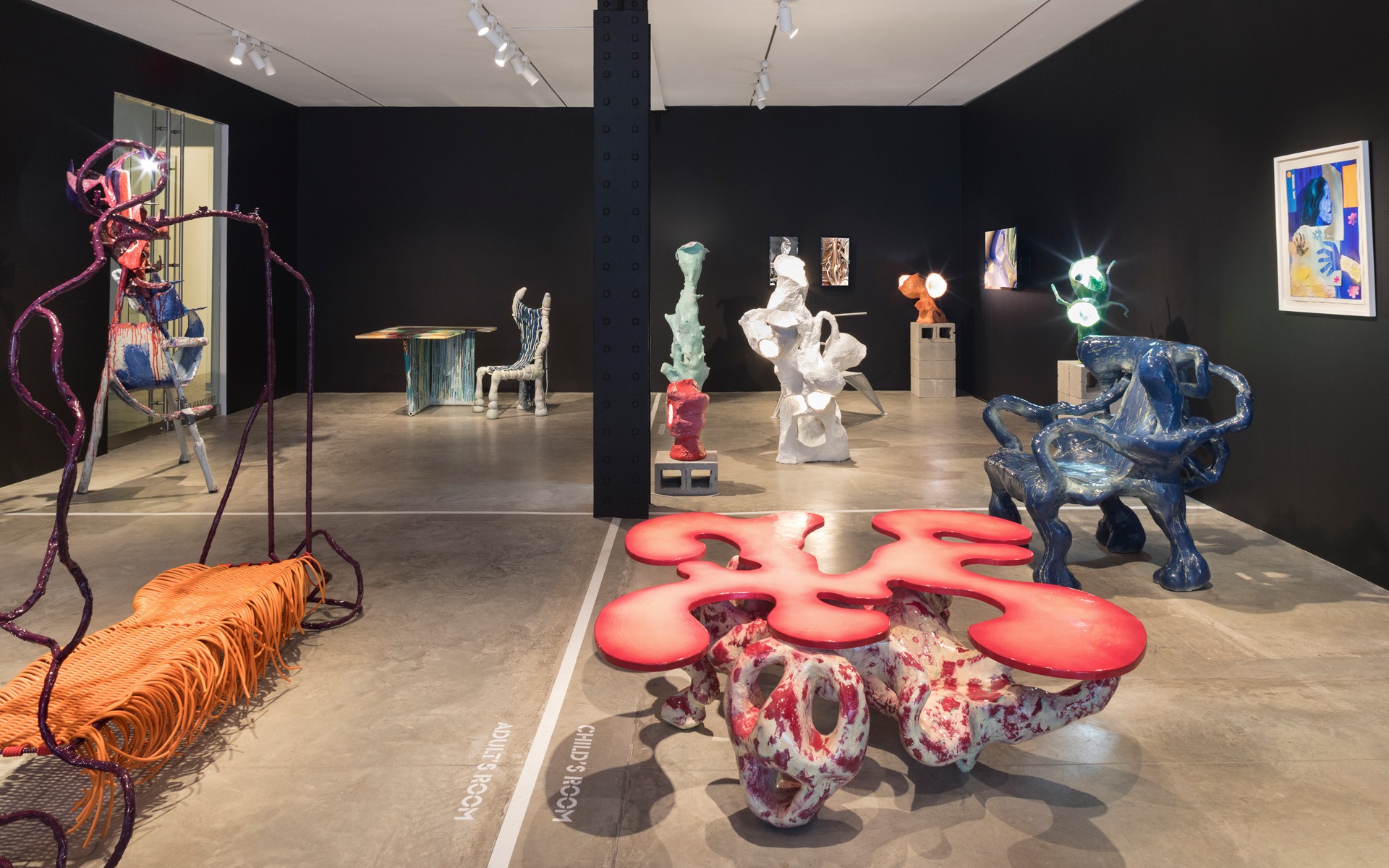 Even more voices are brought into the fold, thanks to the virtual extension of the exhibition, which was born out of a conversation with writer and curator Glenn Adamson. “Our goal was to take cultural institutions that are closed and make them accessible on a public platform,” recalls Miklos. To that end, they staged a “virtual occupation” of the Temple of Dendur at the now-closed Metropolitan Museum of Art, teaming up with digital artist Janis Melderis, composer Amédée De Murcia, and writer Richard Johnston Jones to create an immersive virtual experience. Rife with historical and cultural references, their online “Temple of Confinement” was designed to be both stimulating and reflective. “We weren’t trying to tell people what to feel about it,” says Miklos. “We wanted to introduce abstracted language and let people put their own experiences into that.”

You can enter the “Temple of Confinement” at templeofconfinement.com 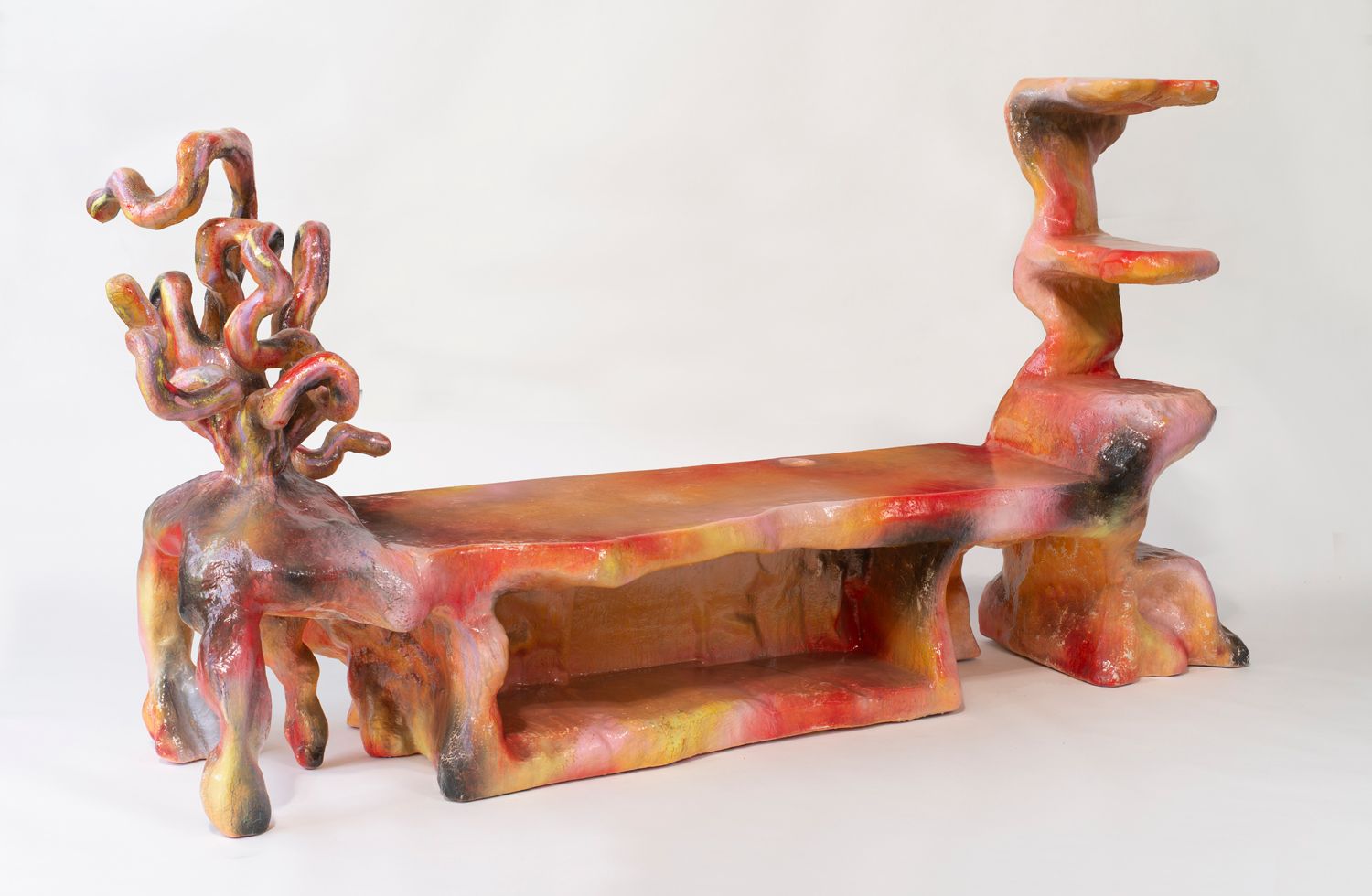 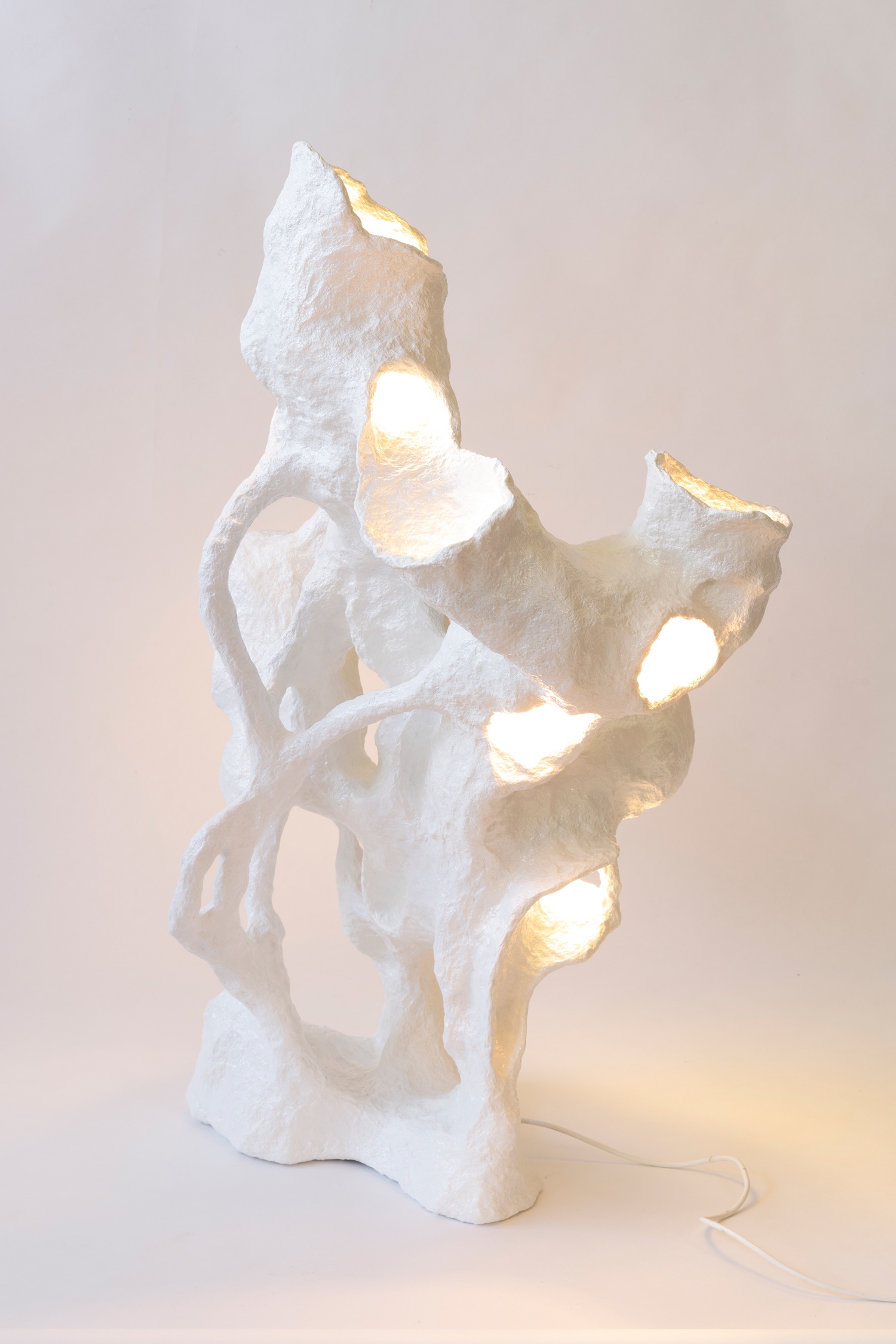 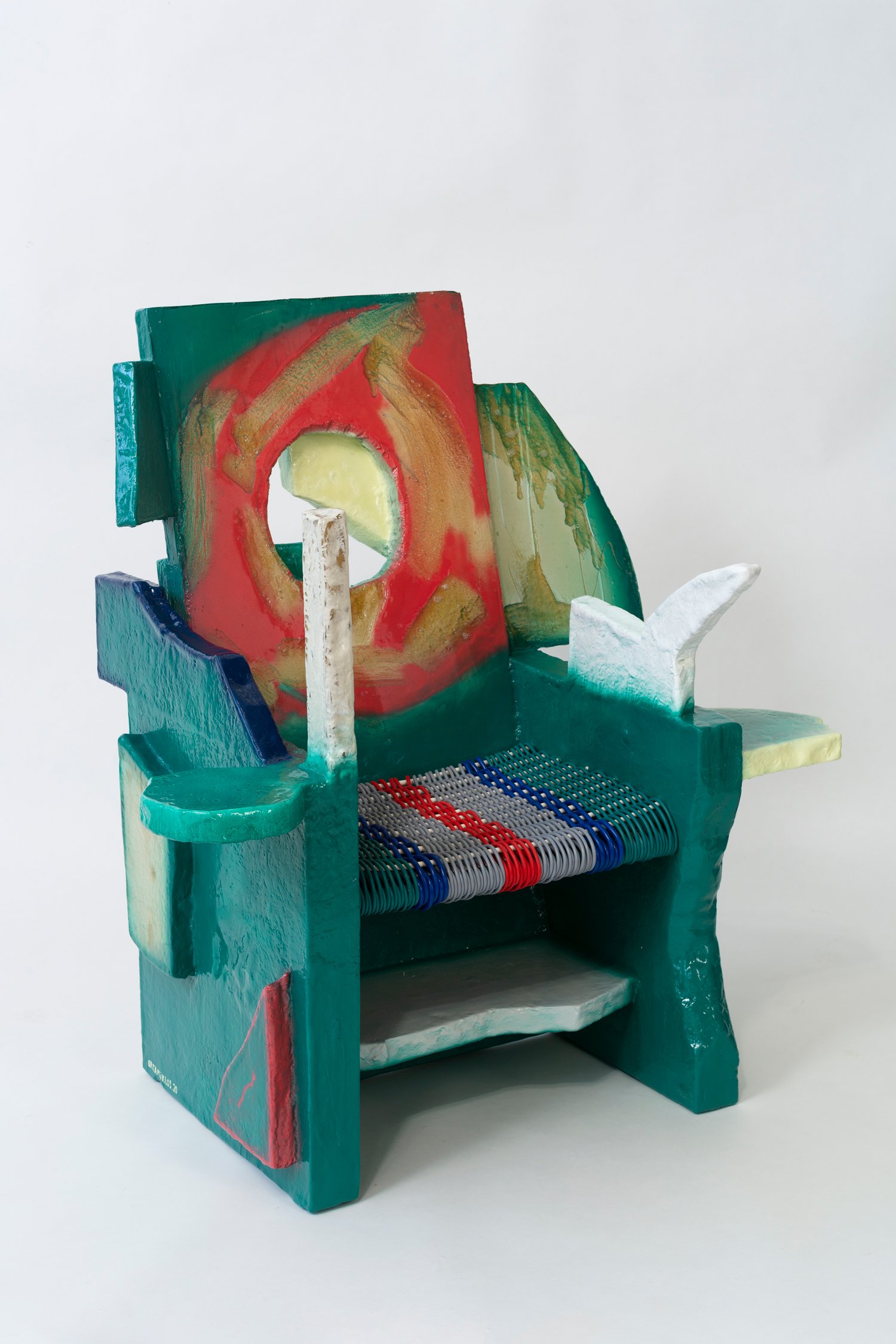 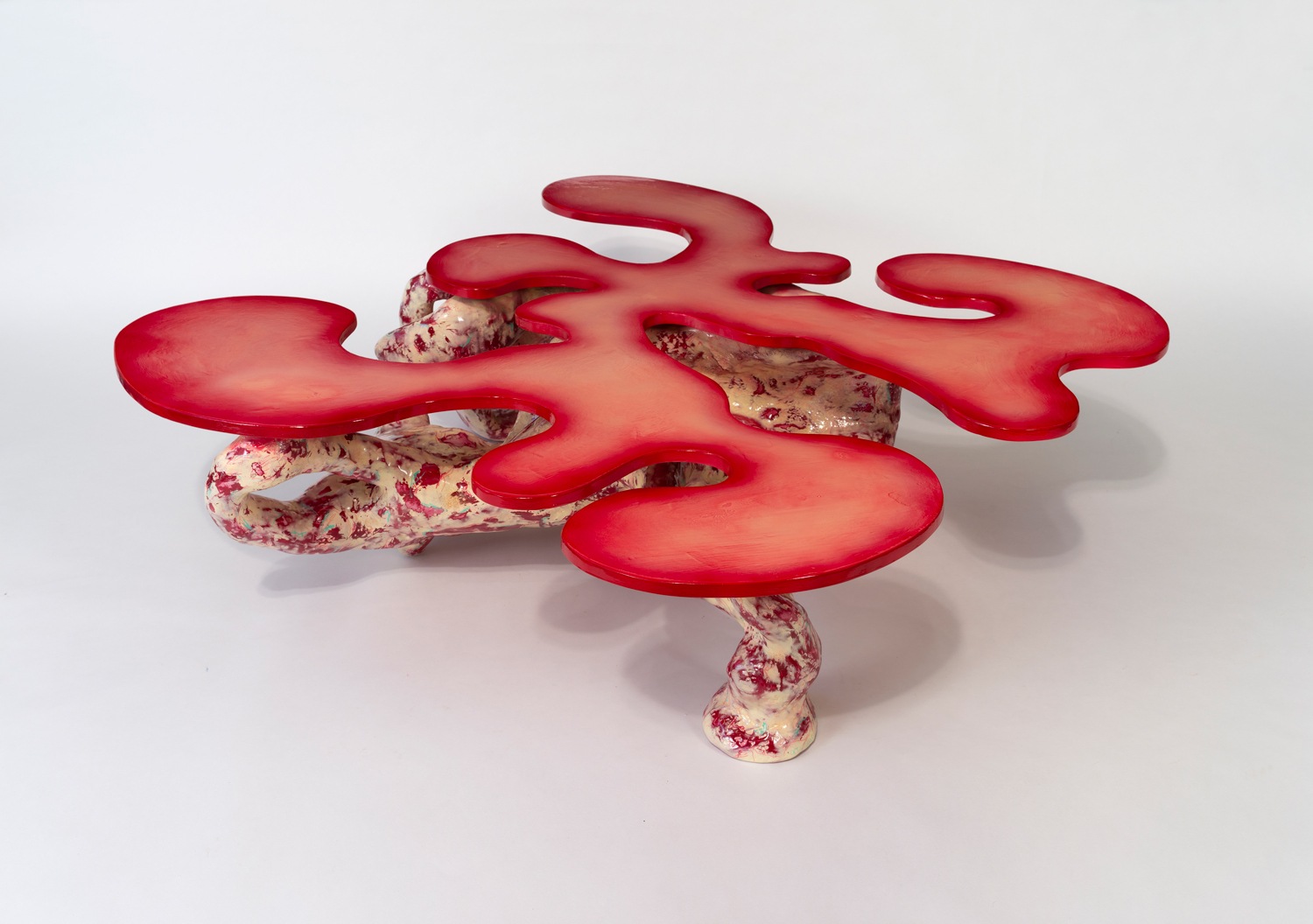 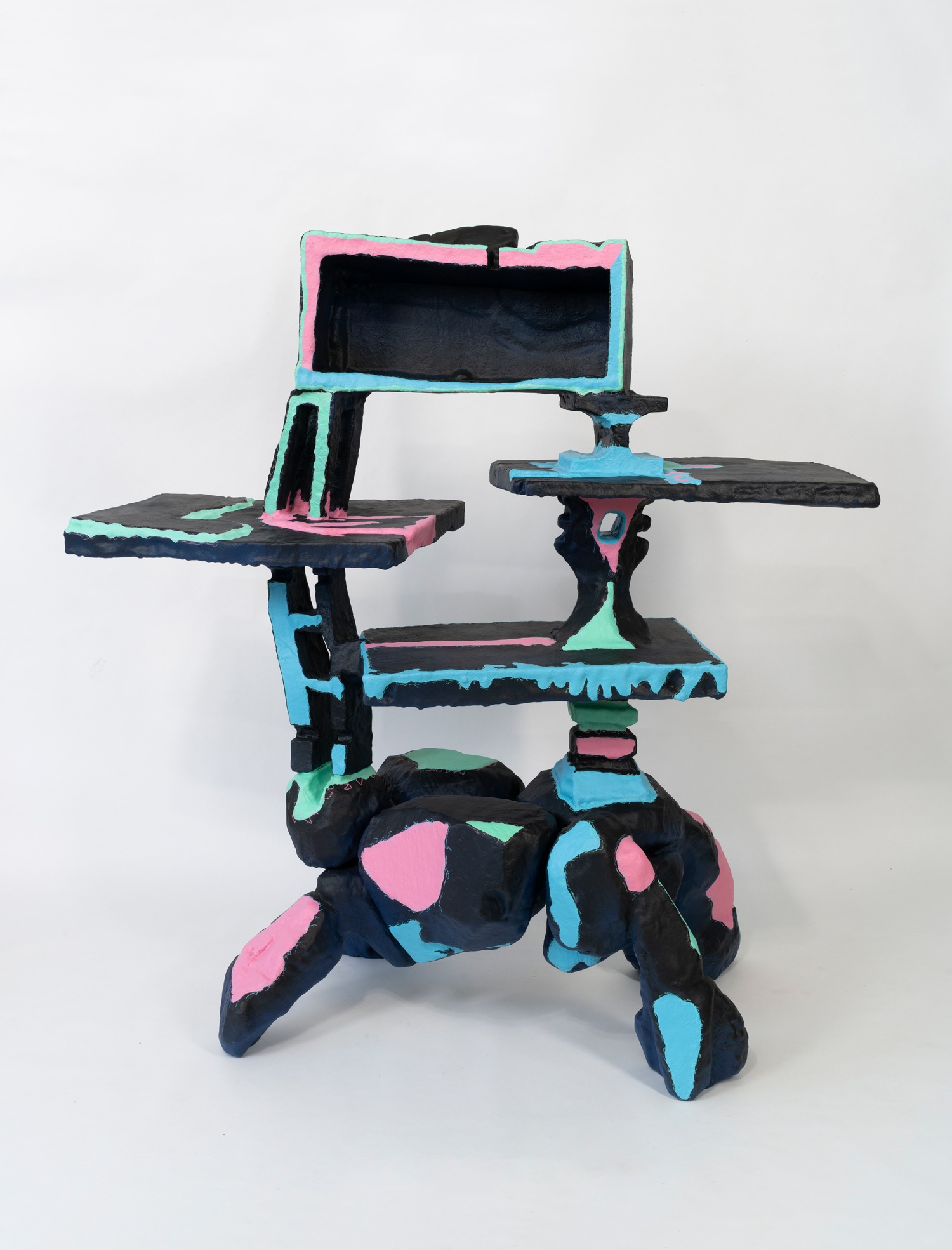 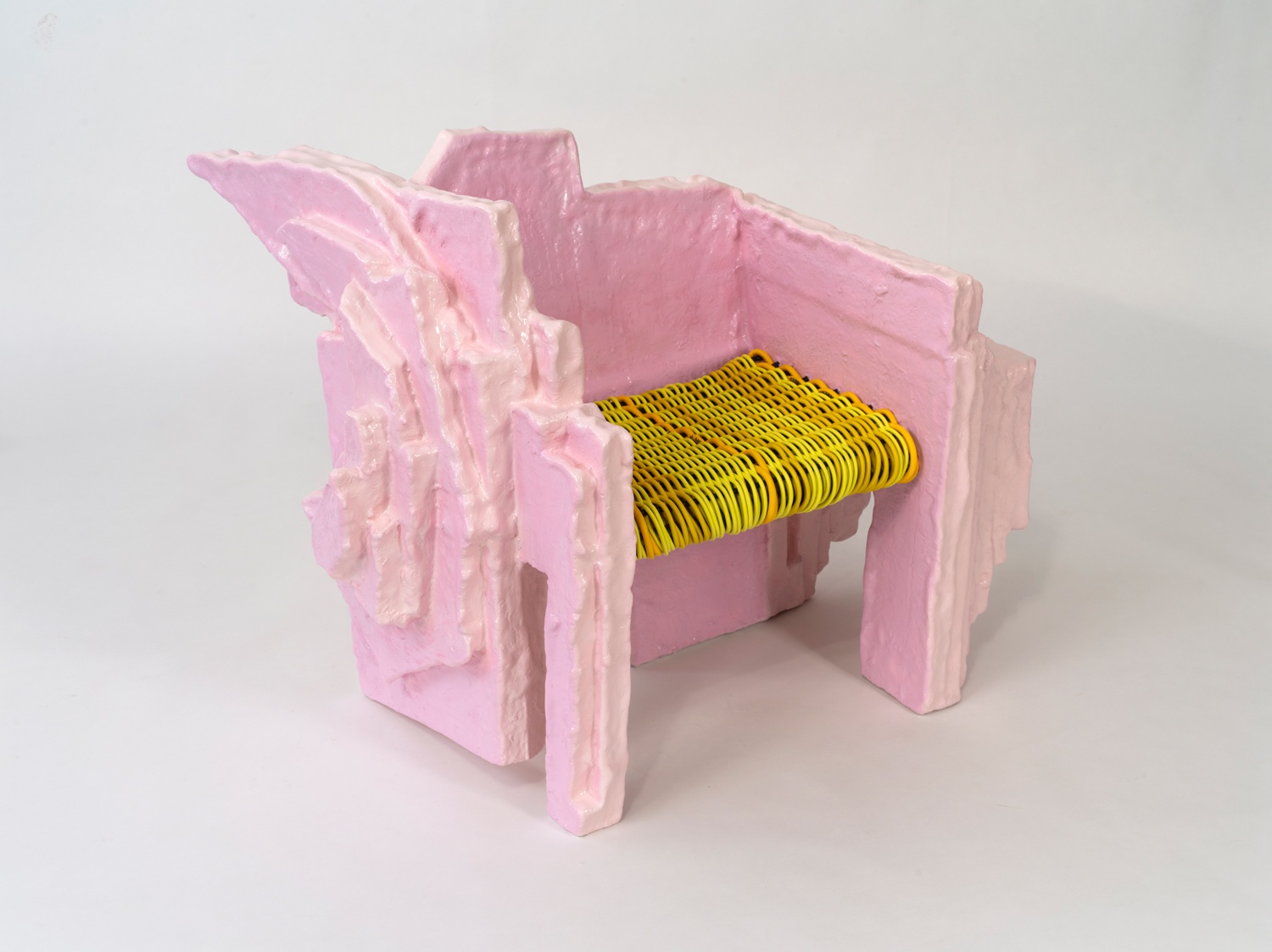