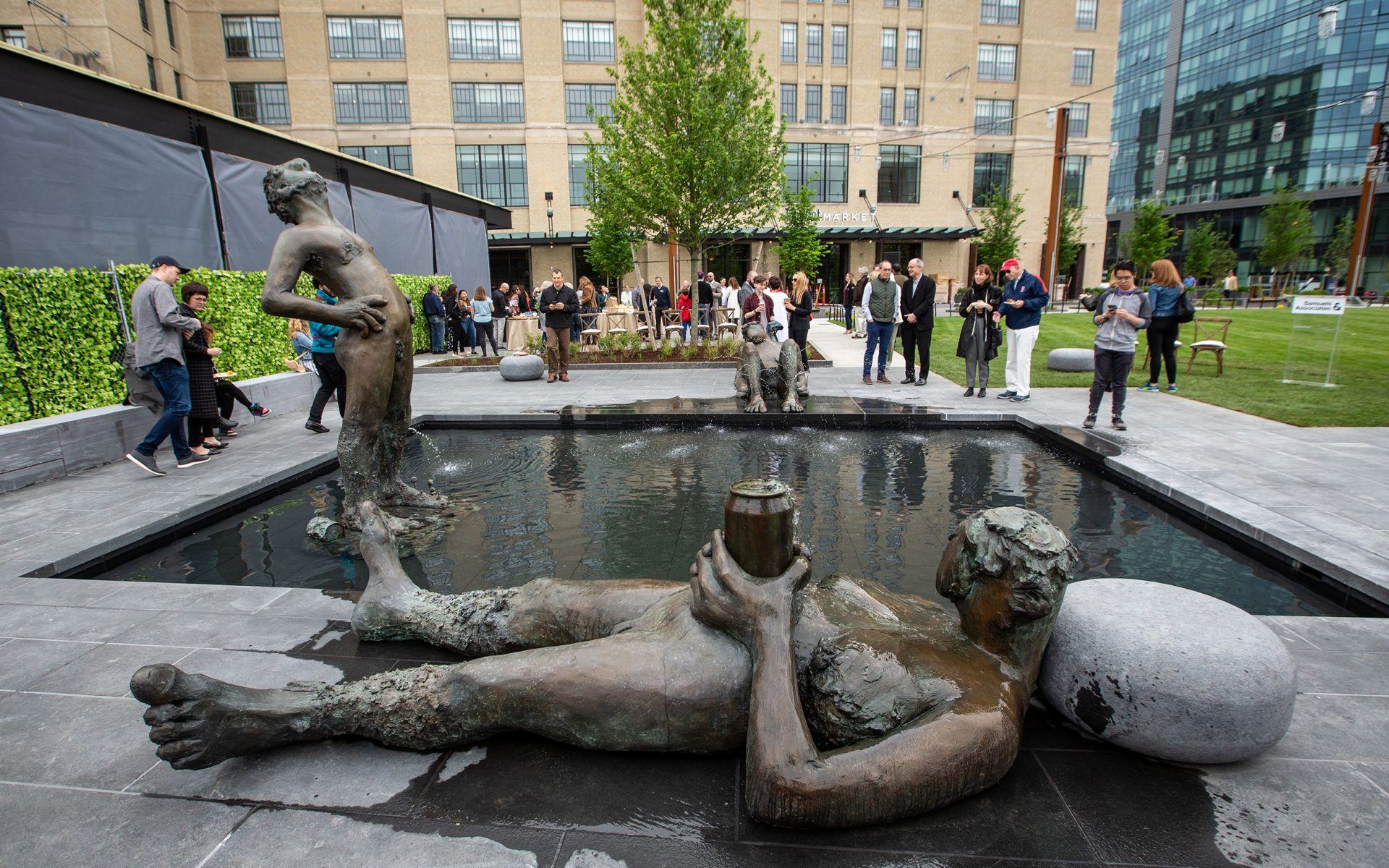 Following the celebrated Münster debut of her works, the Brooklyn artist crafts an all-bronze iteration for Boston’s 401 Park

When Nicole Eisenman unveiled Sketch for a Fountain two years ago, during Germany’s decennial sculptor exhibition, Skulptur Projekte Münster, over a million people visited the work in five months. The three plaster and two bronze figures lounging across an outdoor pool echoed the artist’s playful yet tenacious rendering of human form on canvas and challenged art history’s predominantly idolized female bathers with their nonchalant and unassuming gestures.

Eisenman’s “guys” sparked robust attention, ranging from multiple vandalism cases to fundraising attempts to keep the work permanently on-site. The consensus among the public and critics was that Eisenman’s creation was one of the most irresistible achievements of contemporary sculpture—both disputing and elating its surroundings in a piercing way.

Sketch for a Fountain installed at Skulptur Projekte Münster in 2017. Photo: Henning Rogge

Now the Brooklyn artist is celebrating the recent installment of the work’s second iteration, which was just unveiled at Boston’s 401 Park office and retail complex in the Fenway neighborhood. Developers Samuels & Associates commissioned Eisenman to create the piece for the one-acre green space adjacent to the 1928 structure, which originated as a distribution center for the Sears, Roebuck and Company.

Grouping of Works from Fountain adds another bronze member to the former two, showing three idlers across a pool inside the park, stretching, reclining, and most important, spurting water true to the work’s title. “The work asks for engagement and play,” explains Eisenman, who thinks the Boston version will have smoother interaction with public and hopefully encourage visitors to jump into the basin. Water filtration, dampening of the grass, and fragility of plaster had hindered Eisenman’s Münster “guys” from becoming a playground for kids; however, she is hopeful this all-bronze ensemble will invite kids and adults alike to dip their feet into the water and enjoy the figures’ constant dispatch of water. The most potent stream of the three spews through a beer can standing on the reclining figure’s belly, spreading alongside the pool’s edge; another bather wide opens their legs, letting thin surges of water gush around.

Widely praised for her captivating paintings of intimacy and mundane farce, the artist has long flirted with sculpture, as demonstrated by her current Whitney Biennial piece Procession (2019), located on the museum’s sixth-floor terrace. “I believed you could build better narrative with painting, but this work proved to me the same is possible through sculpture,” she says. Comprised of multiple human figures in variant postures—including a much-Instagrammed figure that occasionally releases smoke through its buttocks—the work is a “post-Trumpian gesture,” says Eisenman. The tour de force is also a clear embodiment of pain, celebration, and chaos that pays equal homage to mourning medieval tomb sculptures of the Court of Burgundy (1443–56) and strollers of a gay parade. In Boston, during the bathers’ introduction to locals, Eisenman’s hopes for engagement had started to transpire with kids replicating the figures’ gestures and then paddling in the water. The honor of delivering the inaugural dip, however, belonged to Abigail Ross Goodman and Molly Epstein of art advisory firm Goodman Taft, which helped facilitate the commission for Samuels & Associates. “Nicole is in the center of figuration today, and considering the work’s openness and sense of community engagement, ours was an intuitive response,” says Goodman about their decision to place an unabashedly gestural sculpture in public. “The figures’ humanity and energetic pull demonstrate the lived experience objects can achieve.”

Recommended: Explore the Fascinating Art Barge Docked in the Hamptons

About the hazards of placing public art in public following vandalism attempts to the Münster piece, Eisenman is fearless and prepared: “The work is entirely bronze, so bring your worst, Boston!”

Nicole Eisenman’s Grouping of Works from Fountain is permanently installed at 401 Park Drive in Boston.