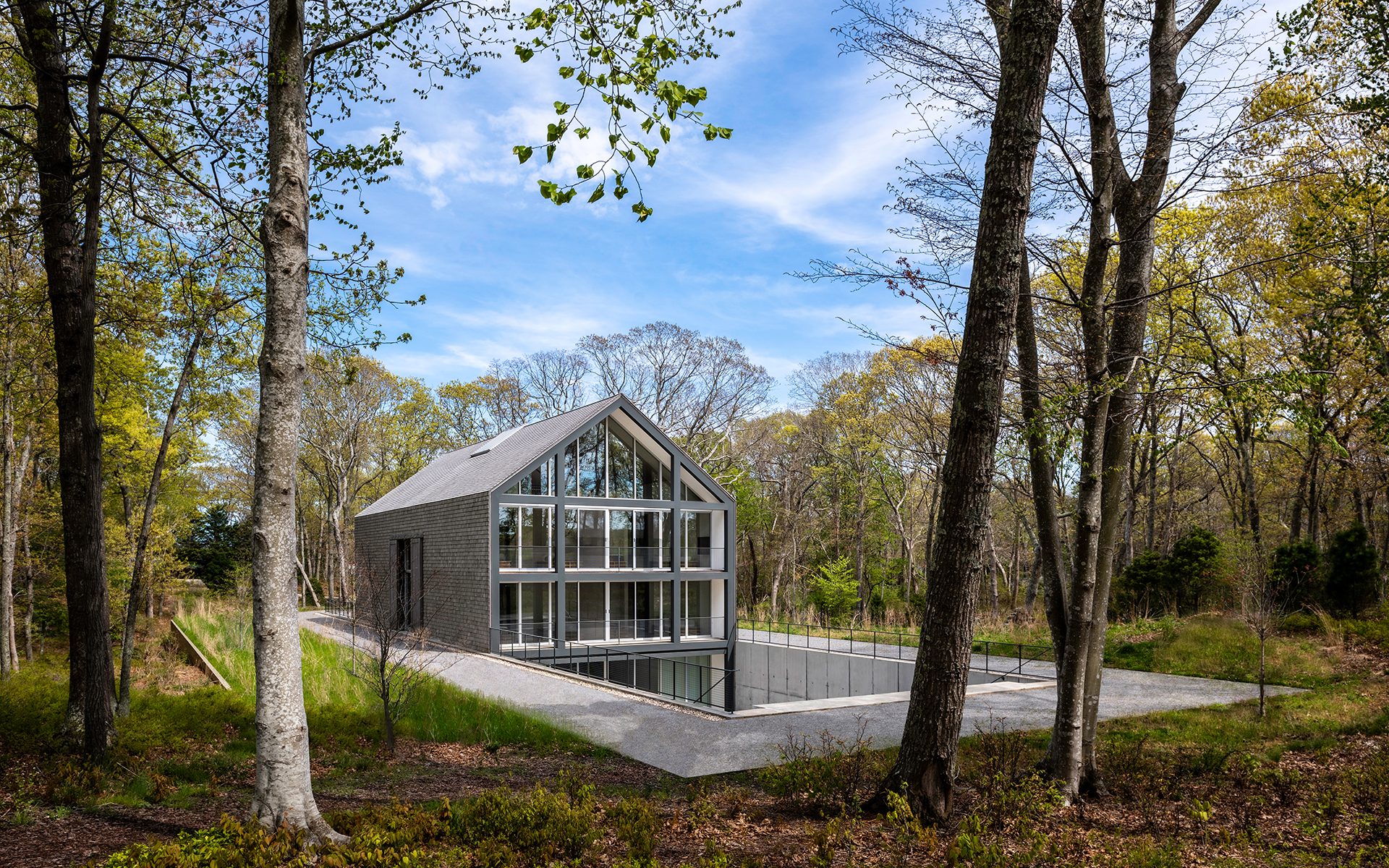 The new artists residence at the Watermill Center, designed by Roger Ferris in collaboration with Robert Wilson.
Photo: Alan Tansey

A collaboration between founder Robert Wilson and architect Roger Ferris, the building offers unique spaces for artist interaction and performances

Located on the campus of Robert Wilson’s Watermill Center, a newly added barn-like structure is designed to not only house artists participating in the institution’s famed residency program, but also encourage impromptu collaborations between the visiting talents. “The ease of access to our main facilities allows for a seamless live-work experience for artists who come to the Watermill Center to focus on their practices,” says Wilson. 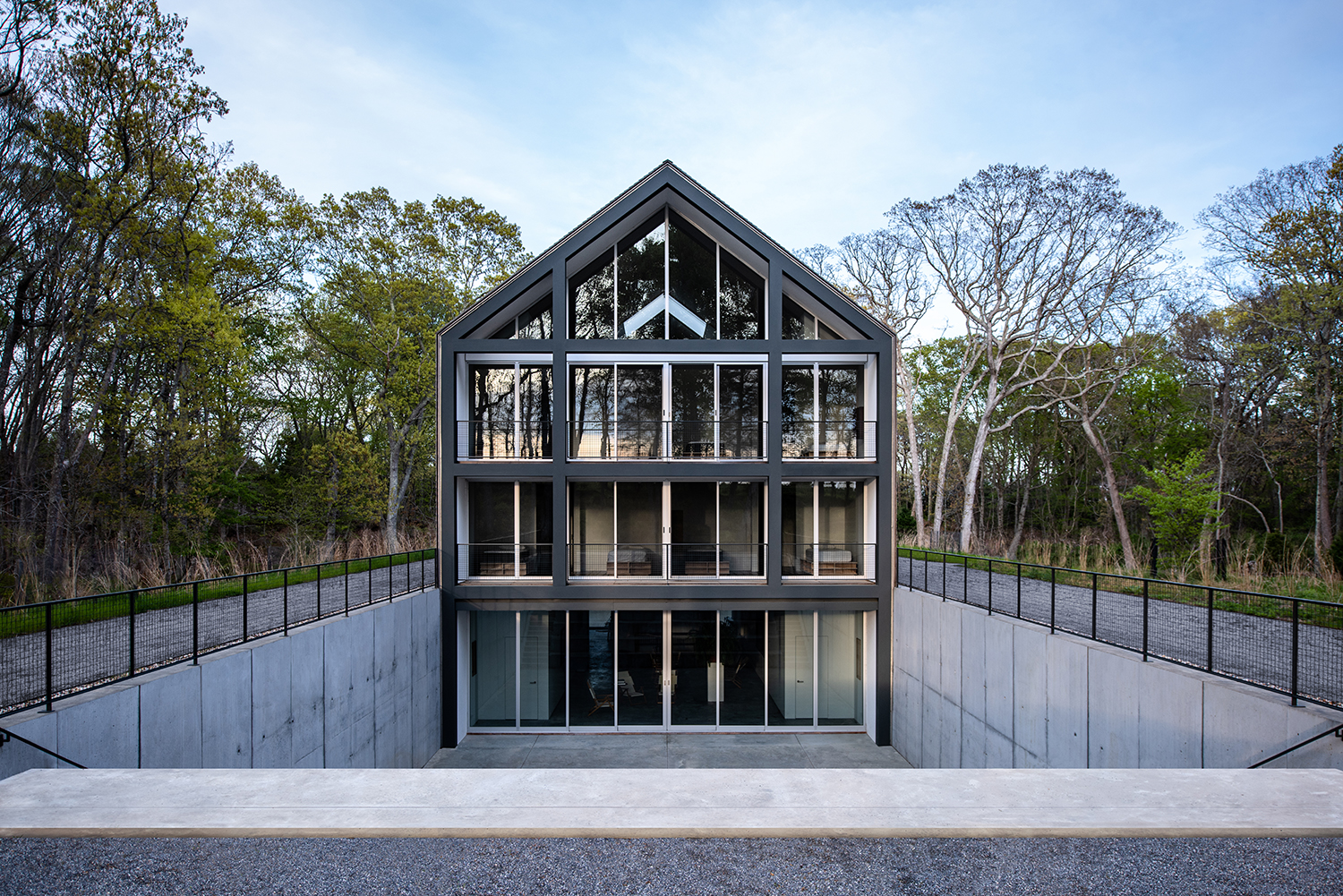 Built into a man-made recess, the building adheres to Wilson’s dedication to orthogonal architecture. Precisely situated on an east-west axis, the home features two gabled walls of glass to make the most of the area’s famed light. “The genius of it comes from the collaboration with Robert Wilson himself,” says architect Roger Ferris, who designed the residence in tandem with Wilson. “He sees architecture in art, furniture, dance, music—in absolutely everything. Everything with Robert Wilson is cross axial, everything has to be north-south, east-west, everything aligned, and everything is perfectly aligned. It may look simple and easy, but it’s not. Everything he does is very organized and so is this house.” 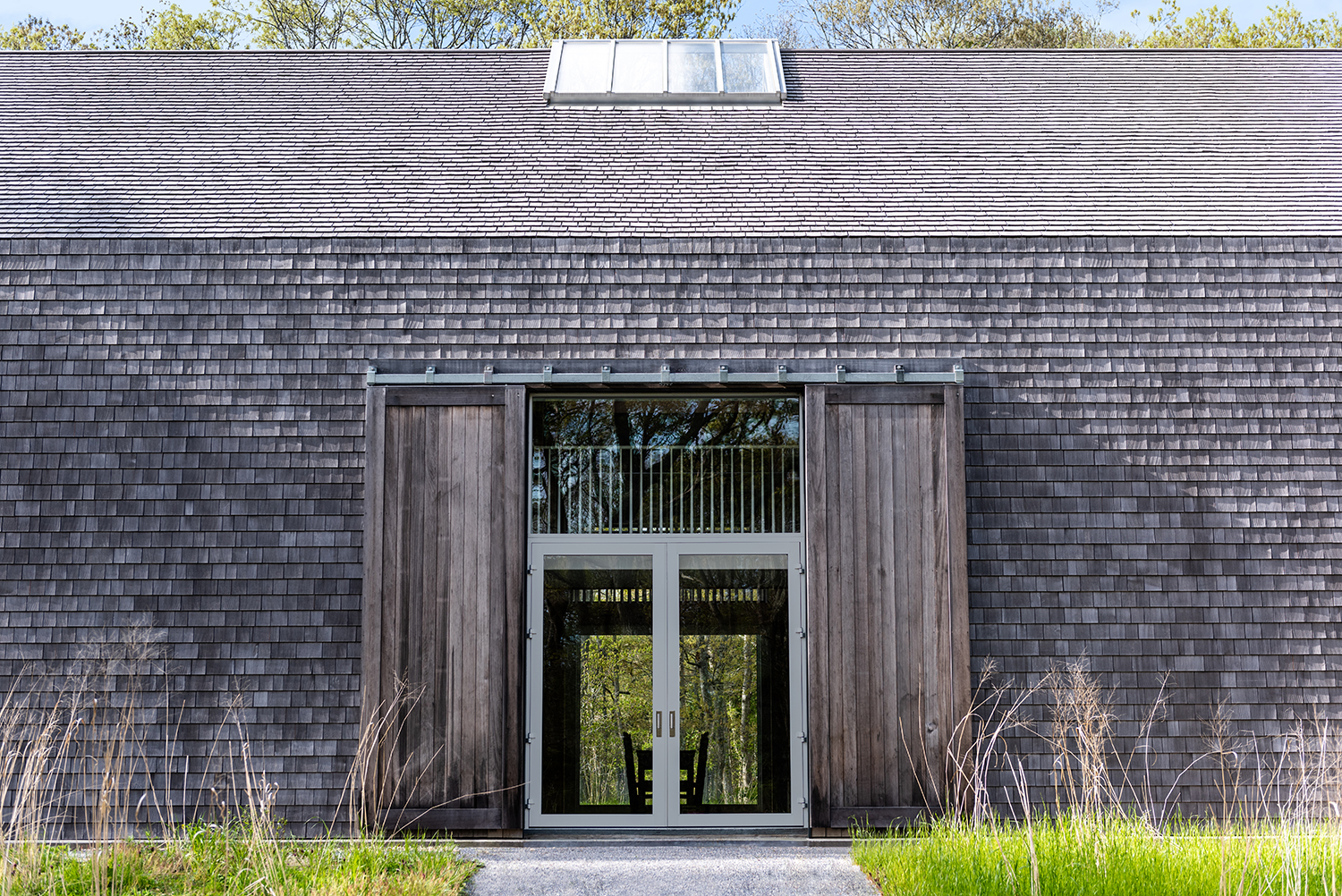 The exterior’s cedar shingles nod to traditional Hamptons style. “We wanted a building that would fit easily into the landscape and architecture of Long Island,” Wilson tells Galerie. “We furnished the Residence with various pieces of Shaker and early American craft. The design was made to stand as a counterpoint to the Main Building, which has an industrial look, the remains of a Western Union Laboratory, built in 1926. The Residence has private rooms for living and communal rooms for gathering, a gallery to showcase the Resident Artists’ work, and a small amphitheater, where works-in-progress can be performed.”

Adds Ferris, “It’s a kind of intervention in the woods. It’s a sculptural object and a useful one.” 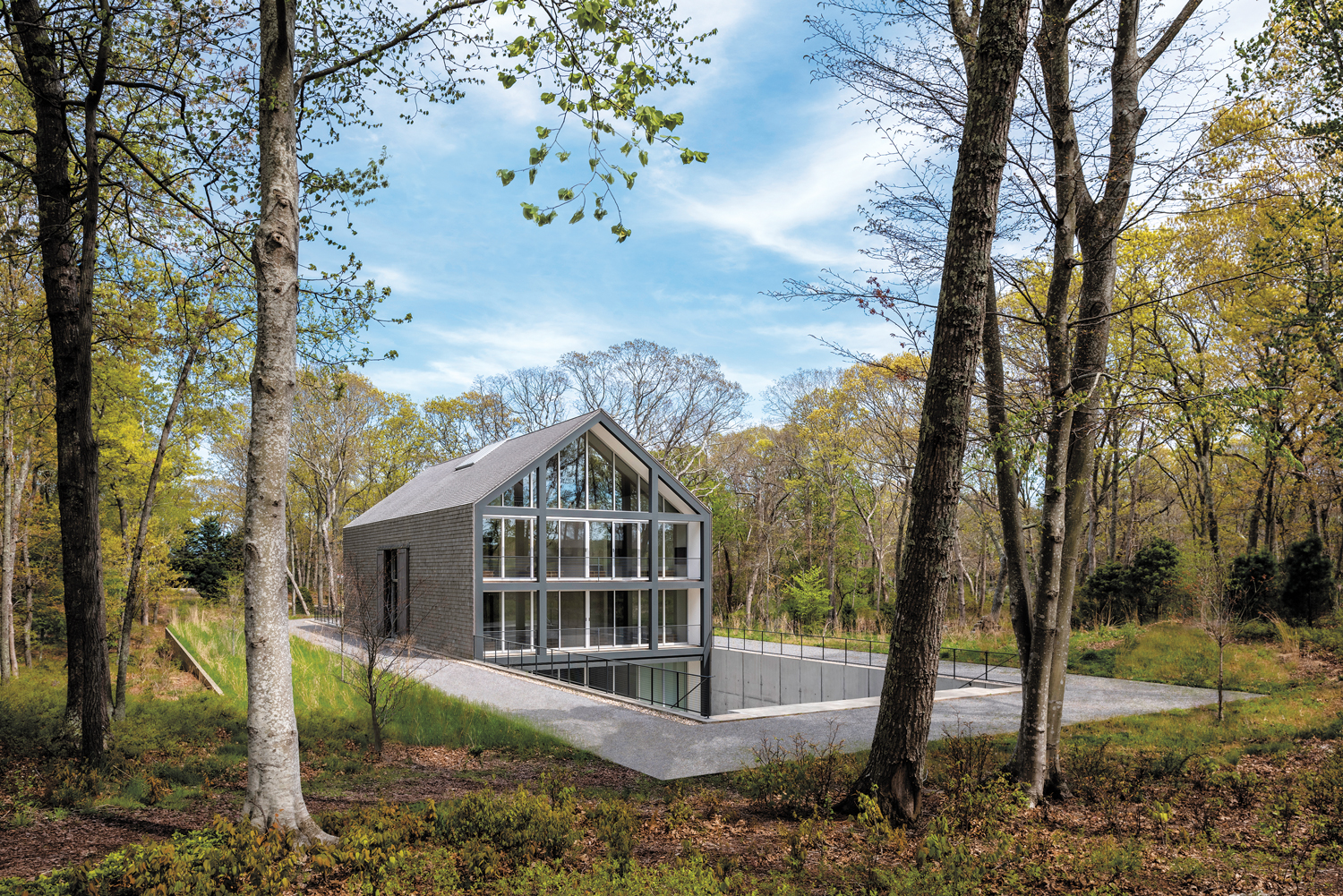 The new artists residence at the Watermill Center, designed by Roger Ferris in collaboration with Robert Wilson. Photo: Alan Tansey

Inside, a post-and-beam interior, which is made using reclaimed wood, allows natural light to flood the open floor plan, from the top-floor artists’ studios to the lower level, which opens to a subterranean amphitheater. Consciously crafted, the residence breaks many of the traditional rules of home design, placing bedrooms along the perimeter with central zones open for communal activities. “It has these spaces that are set up for spontaneous interaction,” says Ferris. “The whole house is meant to facilitate artistic interaction because so often the artists that come here are from all over the world and rarely do they speak a uniform language, and that’s part of the beauty of the Watermill Center. You need to create spaces that sponsor certain kinds of interaction, communication, that you might not see in a typical residence.” 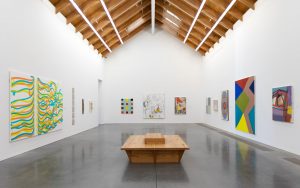 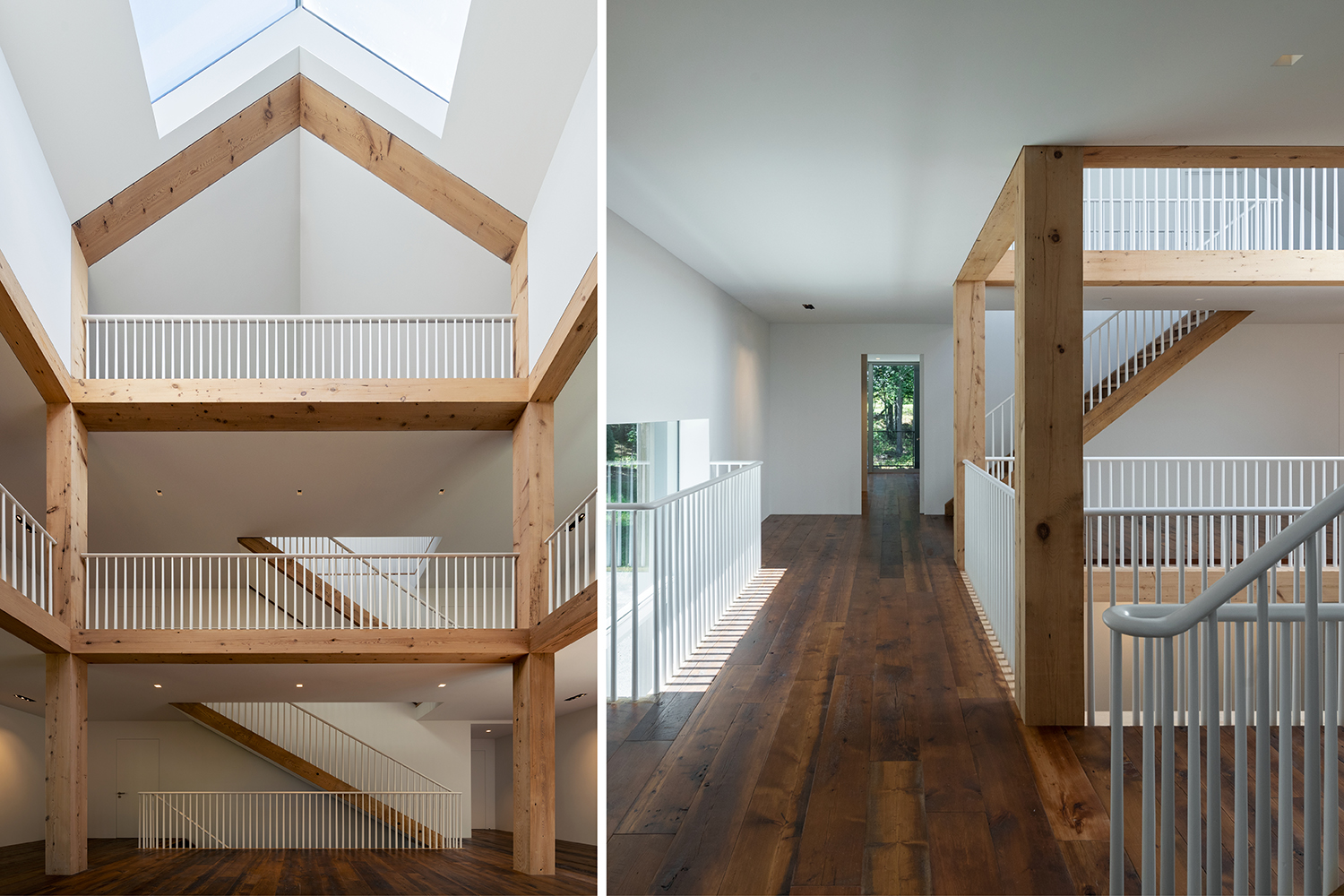 Inside the airy new Artists Residence at the Watermill Center, designed by Roger Ferris and Robert Wilson. Photo: Paul Rivera

Now open, the Residence is already being put to good use with pieces from the Watermill Center collection and work by alumni artists, such as Carlos Bunga and Claire Watson, presented in a curated display throughout the artist-in-residence house. “On the basement level, there is a gallery-style room that opens into the amphitheater—given the light and height of the space, this will also serve as a studio at times,” says Wilson. “For example, Tomashi Jackson, a 2021 Inga Maren Otto Fellow, is currently working in this space prior to her Parrish Art Museum exhibition this July.”

Cover: The new artists residence at the Watermill Center, designed by Roger Ferris in collaboration with Robert Wilson.
Photo: Alan Tansey
Next Post