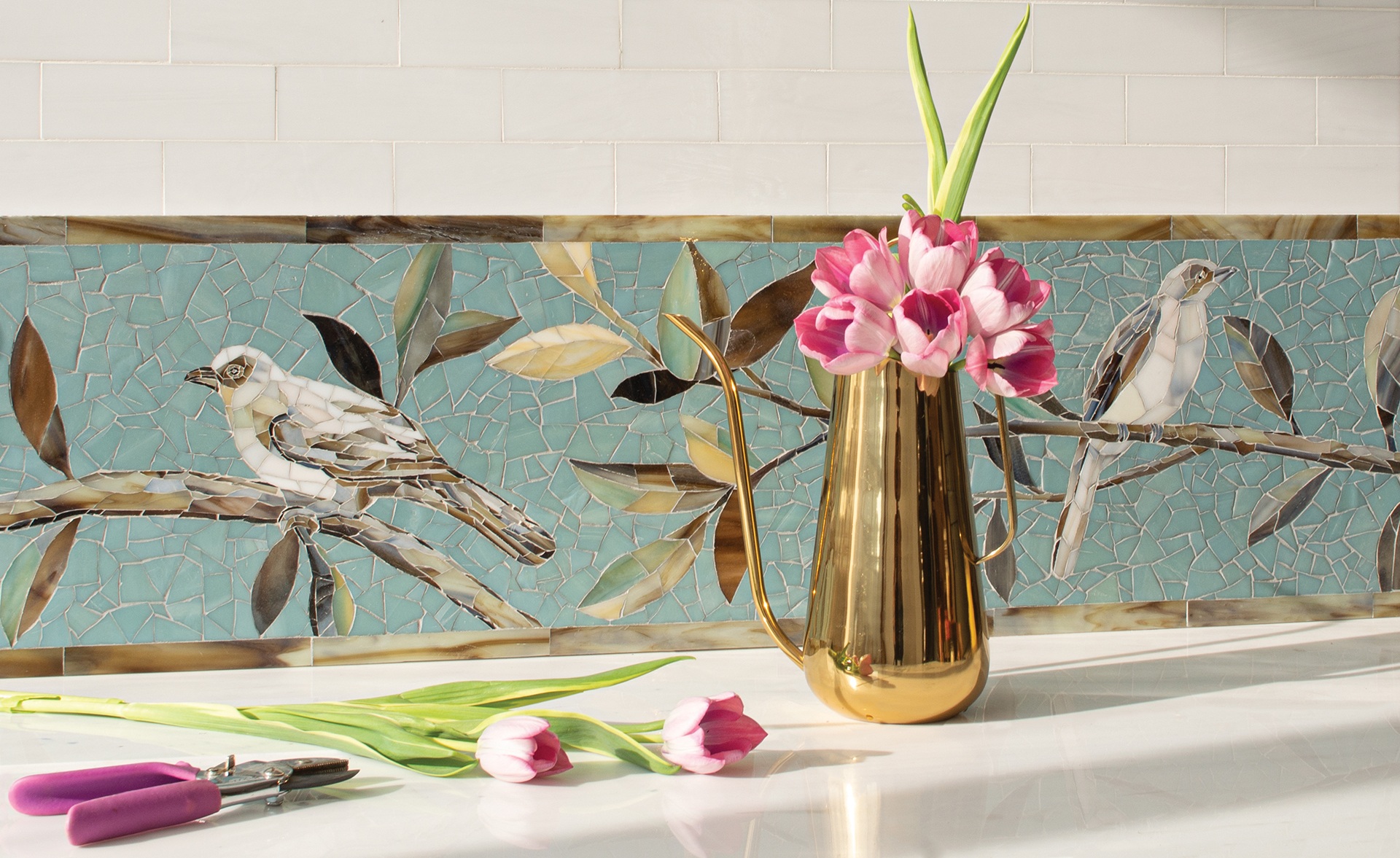 In its first collaboration with an outside company, the mosaics firm translates five of the storied wallpaper atelier’s prints into glass tile creations

In its first collaboration with an outside company, New Ravenna has teamed up with Gracie to translate five of the storied wallpaper atelier’s designs into glass mosaics. “With Gracie, we’re step-in-step with the people we serve, selling art as decoration,” New Ravenna creative director Cean Irminger tells Galerie. “This is a first in that realm, and it’s been really exciting and rewarding to work on together.” 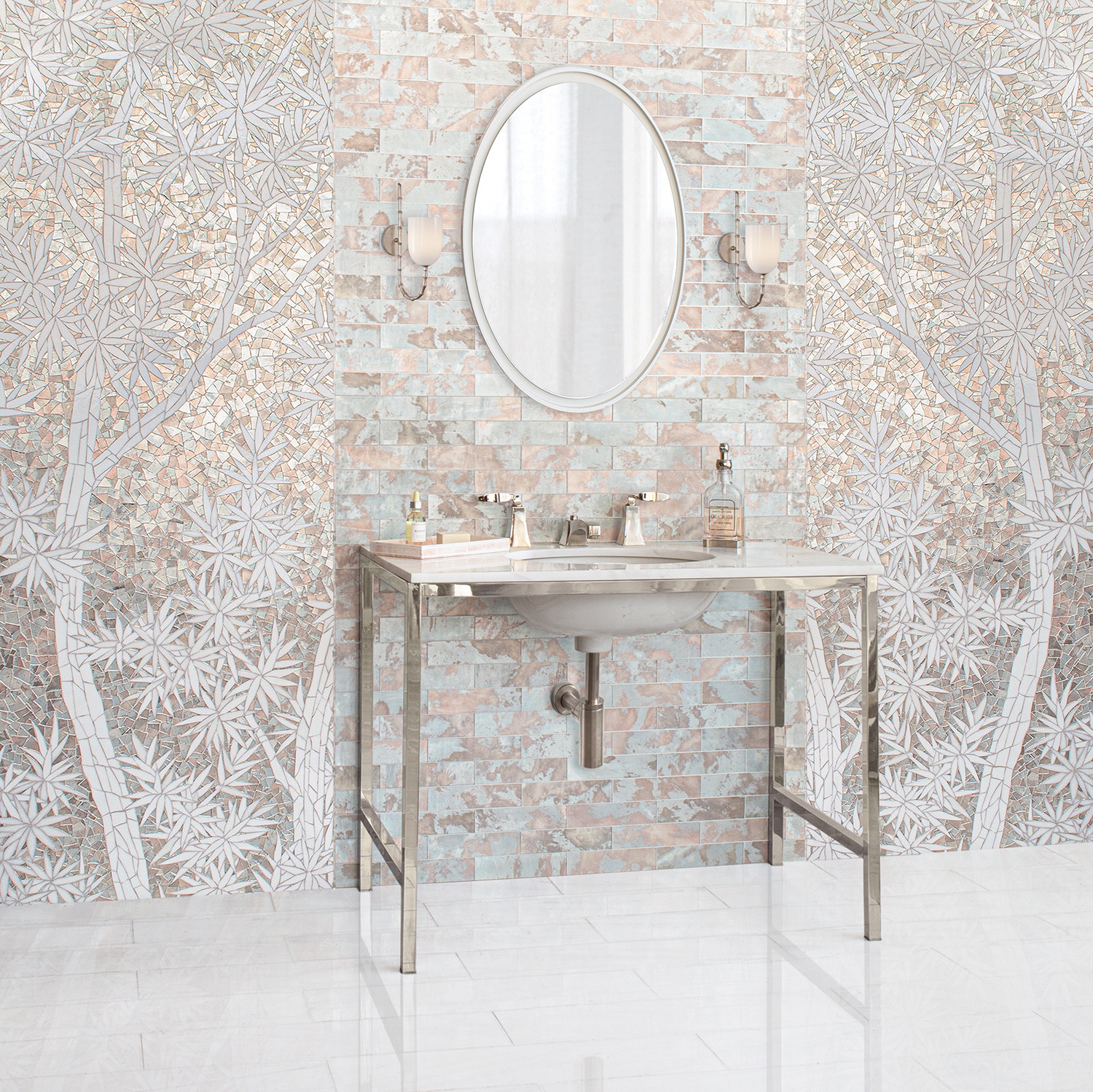 Founded in 1898, Gracie oversees a vast archive of hand-painted prints that encompass otherworldly landscapes, robust florals, and Japanese scenes. “I was like a kid in a candy shop,” Irminger laughs. To curate this initial collection, Gracie’s fourth-generation leaders—creative director Jennifer Gracie and president Mike Gracie—helped narrow down the atelier’s catalog to around ten designs with Irminger then selecting the final five. “The elements had a size and scaling, and the texture and feel lent itself towards mosaics,” she says of the selected styles. “We wanted to find a range of patterns so we did have beautiful, intricate art pieces and then we had ones that took a larger repeat and would be a simpler process.” 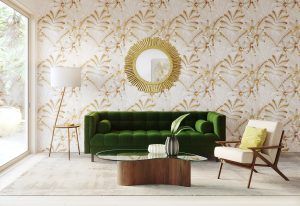 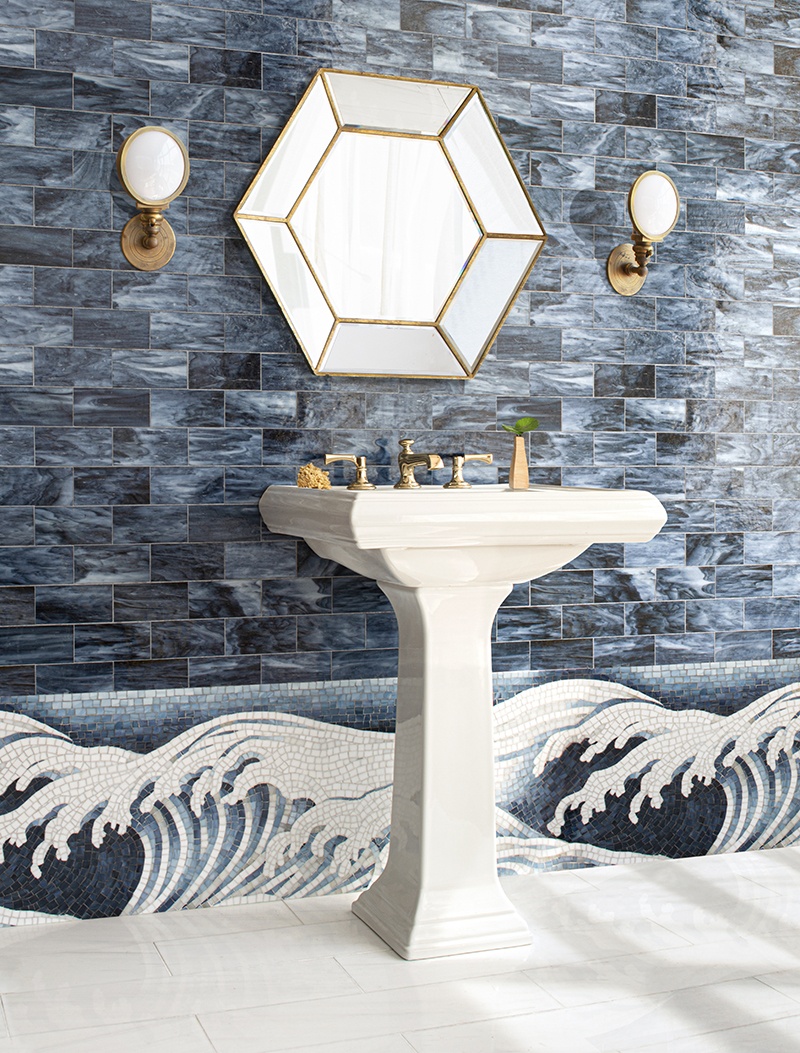 The mosaic studio perfectly reproduces the lush blooms of Blythedunes, tropical French Deco, and expressive Waves out of jewel glass tiles, even matching the painterly quality of the brushstrokes. Made in the United States, the glass tiles are hand-ladled and hand-mixed, creating variations in the hue similar to a watercolor. “Also, glass lends it self to a much more intricate mosaic because it’s thinner and easier to hand manipulate,” Irminger details. “We can use scoring techniques much like a stained-glass artist uses so we can capture a shaded wing or a gentle blend in a leaf.” 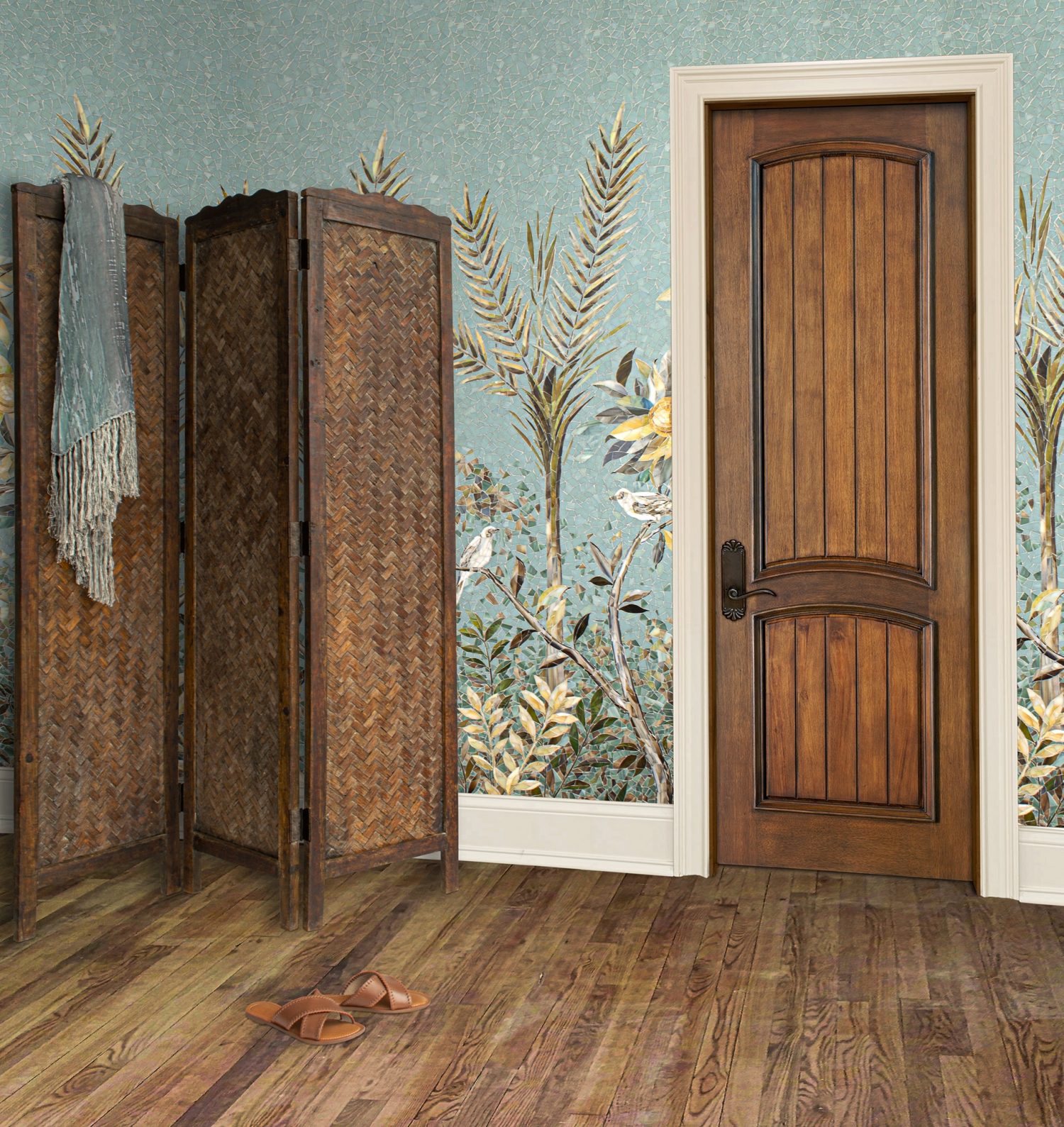 Further adding a painterly effect to the mosaics, New Ravenna mixed the high-gloss tesserae with other pieces made to resemble a frosty sea-glass. “We wanted to replicate the velvety texture of the wallpaper that gives it that antique, old-world feel,” says Irminger, who also used the matte tiles to render the wallpaper’s luxurious metallic elements. “Gracie has these gold and platinum backgrounds and we wanted to try to catch that without it being so very reflective. Adding a matte finish to metallics takes it back to a velvety feel that still has a sparkle that can catch the light.” 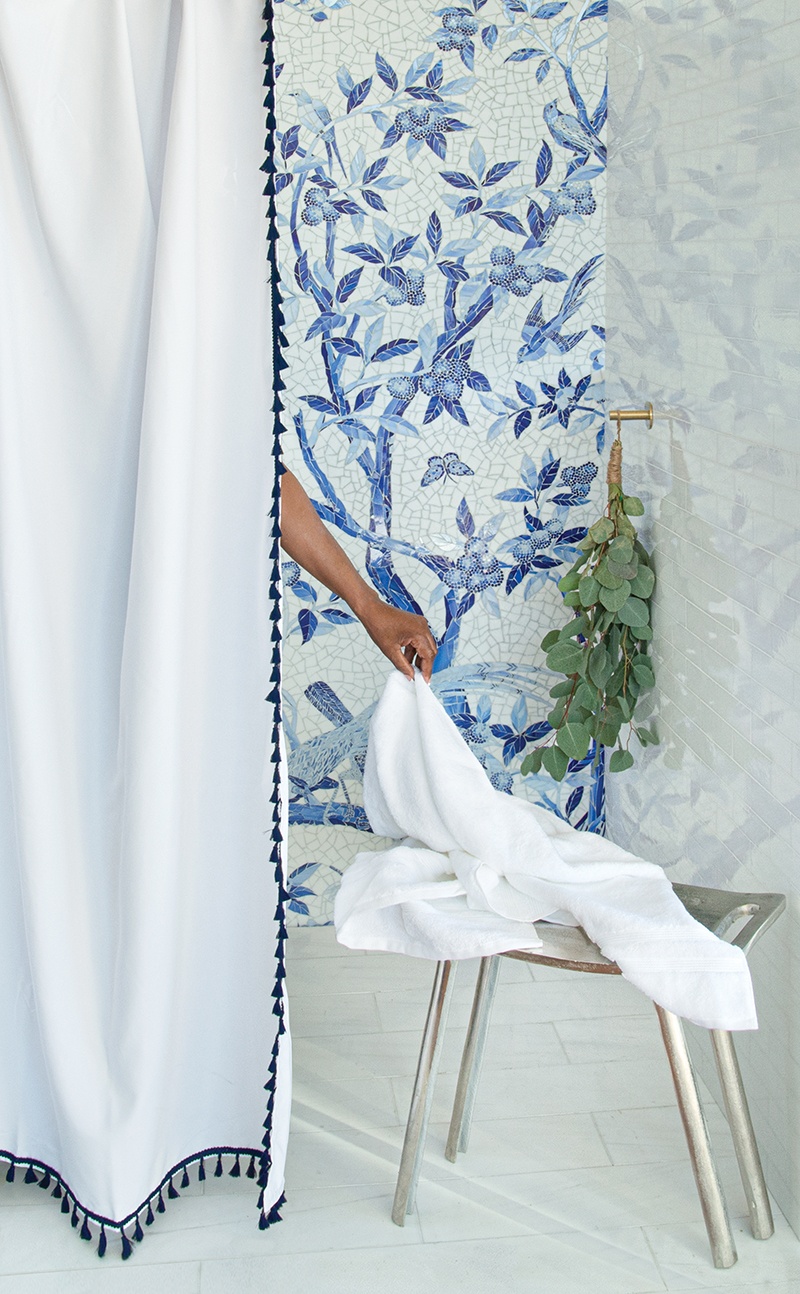 New Ravenna then took the designs a step further by offering the Gracie patterns in their original colorway as well as in various other shades, which can also be customized from the company’s library of 50 to 60 hues of glass. Blythedunes, for example, is presented in its original turquoise but also a Delft white and blue, while watery Waves is recreated in a chocolatey brown and Linda’s Garden is revealed in both its original aqua and a vibrant red interpretation. “It’s just playing with color, which is so fun,” says Irminger.