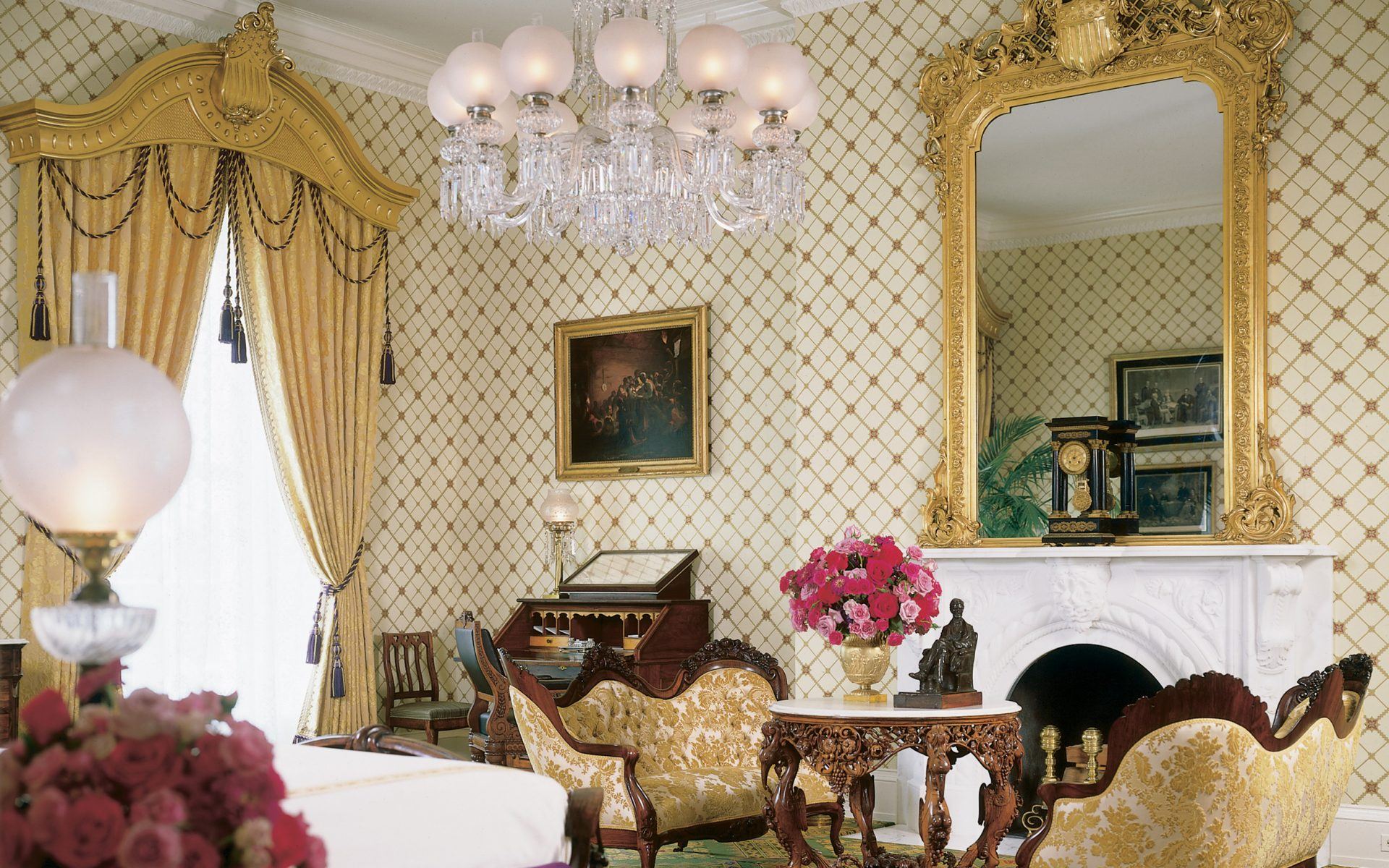 Of the 132 rooms in the White House, the Lincoln Bedroom might be one of the most famous, if not the most misunderstood. For starters, President Abraham Lincoln never used it as a bedroom; instead this was his executive office and he utilized the suite for cabinet meetings. The resplendent rosewood bed wasn’t his either, although his wife, First Lady Mary Todd Lincoln, did indeed purchase the piece for visiting dignitaries. And while a framed copy of the Gettysburg Address has pride of place, the document that the 16th president signed in the room was actually the Emancipation Proclamation. Add to that ghost sightings and a slew of famous overnight guests, and it’s no wonder that the room has developed a mythical aura in the American consciousness.

Referred to as the Lincoln Study by presidents Herbert Hoover and Franklin Roosevelt , the space as it exists today was initially conceived during Harry S. Truman’s renovation of the White House (1948–52). During the reburbishment—the first comprehensive overhaul since the mansion was almost destroyed in 1814—the Trumans wanted a place to combine all of the Rococo furnishings from Lincoln’s era in one space. A decade later, First Lady Jacqueline Kennedy added even more historical pieces, as did subsequent first ladies, until 2004, when Laura Bush spearheaded a sweeping Victorian-inspired revamp. Completed with the support of the White House Historical Association, the glowing results of her efforts remain largely intact today.

To understand how the elements of the room create a whole, Galerie spoke with former White House Curator William Allman and Matthew Costello, vice president of the David M. Rubenstein National Center for White House History. The Lincoln Bedroom as it looked after the Bush refurbishment. Photo: White House Historical Association

“The bed is probably the most iconic piece in the room,” says Costello of the magnificent rosewood refuge, which First Lady Mary Todd Lincoln acquired as part of a ten-piece set in New York in 1861. “The reason she purchased it was because the White House didn’t have a suite for visiting dignitaries. Everyone assumes Lincoln slept in it, but that’s not true,” he adds. Originally located in the Prince of Wales Room, the bed moved around in the decades after Lincoln—with Presidents Theodore Roosevelt, Woodrow Wilson, and Calvin Coolidge all using it in their private sleeping quarters until the Trumans moved it to its current home in what is now named the Lincoln Bedroom. The Lincoln Bedroom as it looked under the McKinley administration in 1900, before the bed cornice disappeared. Photo: Bettmann/Getty Images

Historical documents indicate that there was originally a cornice above the bed. “We don’t know what happened to it,” admits Costello. “But we think it was lost or destroyed in the 1920s or perhaps damaged beyond repair.” The current gilded crown, draped with rich purple fabric, was reproduced during the Bush update and is based on historical descriptions and images. “It also picks up other elements in the room. For example, the window cornices have the same color. The shield on the cornice looks like the U.S. shield but in gold, and there’s a similar one across the room in a mirror purchased by President Franklin Pierce.” Detail of the wallpaper, based on a swatch provided by Historic New England. Photo: White House Historical Association

While the Kennedy renovation left the walls of the bedroom a pale shade of lemon, Bush sought to capture the Victorian aesthetic from Lincoln’s era, despite the room’s changes in use. For historical accuracy, the team relied on a sketching and paintings by Francis Bicknell Carpenter and an engraving by Alexander Hay Ritchie, as well as eye-witness newspaper accounts. “The sketches that Carpenter did noted a dark-green striped pattern with yellow medallions factored into it,” says Costello. “We consulted with Richard Nylander, who was then the curator of Historic New England, and within their collections was a fragment of wallpaper that was very similar in terms of time period. It was dark green, purple, and red, so we used it as a prototype and changed the color scheme.” A detail of the current carpet in the Lincoln Bedroom. Photo: White House Historical Association

Former White House curator Betty Monkman, who preceded Allman, consulted with rug specialist John Burrows of J. R. Burrows & Company to devise the Victorian-inspired floor covering. “Because the images are black-and-white, they had more flexibility with colors,” says Costello. “People’s observations from the period talked about the rug having green, oak, and brownish hues.” The end product—which incorporates a geometric design made from shades of emerald and gold—was crafted by the U.K.’s Grosvenor Wilton, a historic carpet manufacturer that was established in 1790. “The most significant object in the Lincoln Bedroom is the fifth and final copy of the Gettysburg Address, handwritten by President Abraham Lincoln,” says Allman. The document lives in the desk that Lincoln used to formulate his thoughts on emancipation. “It’s the only one titled, dated, and signed. It is a rarity in a collection that includes very few documents and consists mostly of fine arts and decorative arts objects.” First Reading of the Emancipation Proclamation Before the Cabinet. This 1866 engraving by Alexander Hay Ritchie is based on the 1864 painting by Francis Bicknell Carpenter. The widely circulated engraving depicts the first reading of the Emancipation Proclamation in the Cabinet Room of the White House, in what is now the Lincoln Bedroom. Photo: Library of Congress

Among the framed works of art in the room is the 1886 engraving First Reading of Emancipation Proclamation Before Cabinet, after the painting by Francis Bicknell Carpenter. Another is Watch Meeting – Dec. 31st 1862 – Waiting for the Hour by William Tolman Carlton, which depicts enslaved people waiting for midnight to strike 1863, when the Emancipation Proclamation would go into effect. Another painting on view, called the The Republican Court in the Days of Lincoln by Peter Frederick Rothermel, depicts a fictionalized reception in the East Room, showing President and Mrs. Lincoln, Vice President Andrew Johnson, the cabinet, and some of the union generals, including Grant, Sherman, and Scott. A circa-1863 photo of President Lincoln in his office—now the Lincoln Bedroom—with the fireplace in the background. Photo: Keya Morgan

In addition to the rug and bed cornice, Allman says the white marble mantel was among the most challenging and rewarding aspects of the Bush refurbishment. The room’s original fireplace was removed during the Roosevelt renovation in 1902 and has not been located since. A new white marble mantel, carved based on historical photos, is meant to resemble one that Lincoln had. “The curators and the craftspeople did not always see the same decorative elements in the same source materials,” explains Allman. Many of the Victorian furnishings that survived from the Lincoln era were carved by John Henry Belter, known for his use of strong laminated rosewood. The pieces include the intricate marble-top table, a chest of drawers, and a set of chairs. “Some of the other pieces don’t have identification marks, but we assume that they are also by Belter based on the use of similar materials and time period,” says Costello.