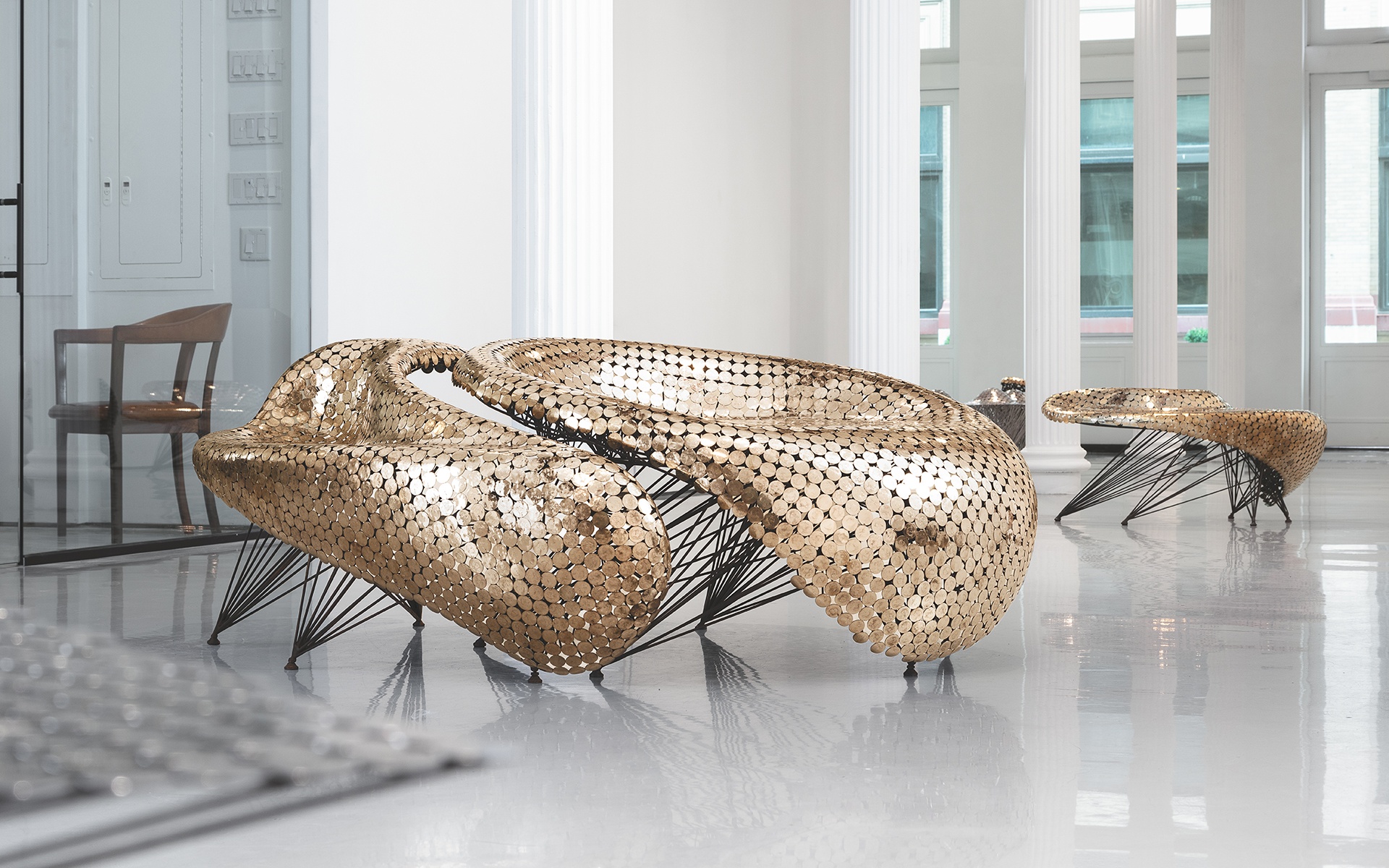 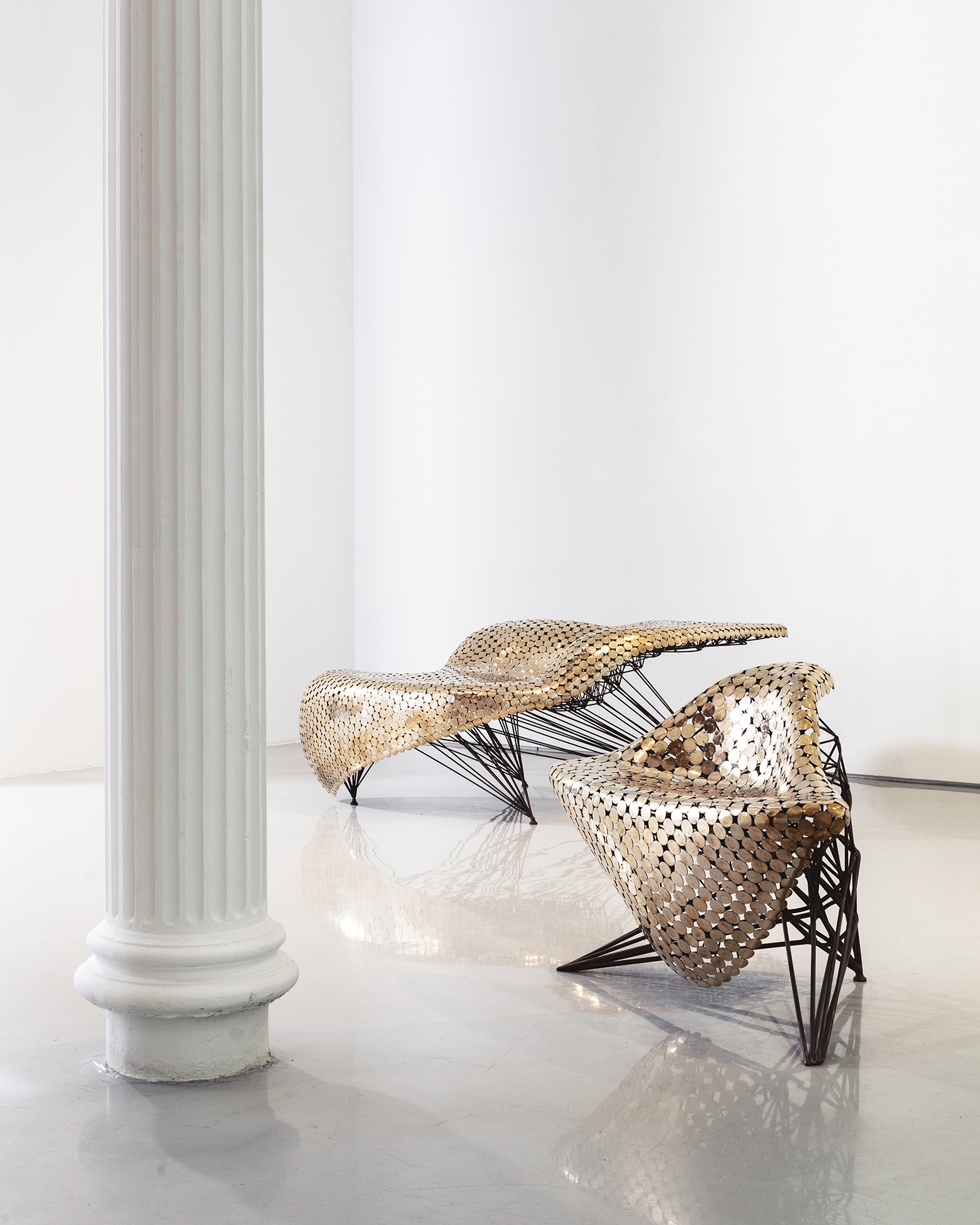 Seductively shaped and incredibly intricate, Johnny Swing’s fused-coin furnishings are born of manifold sources. “I live and work in Vermont and love the natural environment when it’s covered in snow,” he told Galerie after being named one of our 2020 Creative Minds. “I look at hillsides and geology to get my forms, as well as 1950s European race cars and the curves of the human body.”

Using discarded currency, the renowned furniture designer has been creating sculptural works by welding together thousands of coins since the 1990s. His latest pieces, produced in the last two years, are now on view at Tribeca gallery R & Company, in a show dubbed “Fast and Present” that builds on the foam models that were displayed as part of the retrospective at Vermont’s Shelburne Museum in 2019. “We started to talk to Johnny about making new work that played with scale, form, and texture,” says gallery principal Zesty Meyers. “What’s new is that all of the pieces were designed to be interlocking,” he explains, adding that the display includes a suite of seven furnishings called Septum Maria that can be configured in hundreds of ways.

These Otherworldly Furnishings by Designers OrtaMiklos Were Created Entirely in Quarantine 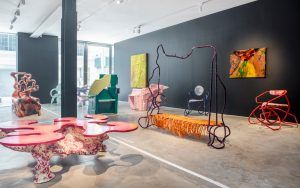 The set, which includes curvaceous benches and a circular table, is available in either silver (made using nickels) or gold (dollar coins). “The craziest thing is that even though he uses all of this metal, the pieces are insanely comfortable,” Meyers tells Galerie. “That’s a hard thing to do with chairs, but these are designed so that you can sit in many different spots.” Also included in the show are some of the smallest pieces Swing has made, some measuring just 30 inches from end to end. “They are crafted to be more personable, so you can move them around to different areas of the home. And since they are weather resistant, they can even go outside—they aren’t going to freeze and crack because they are real currency.” 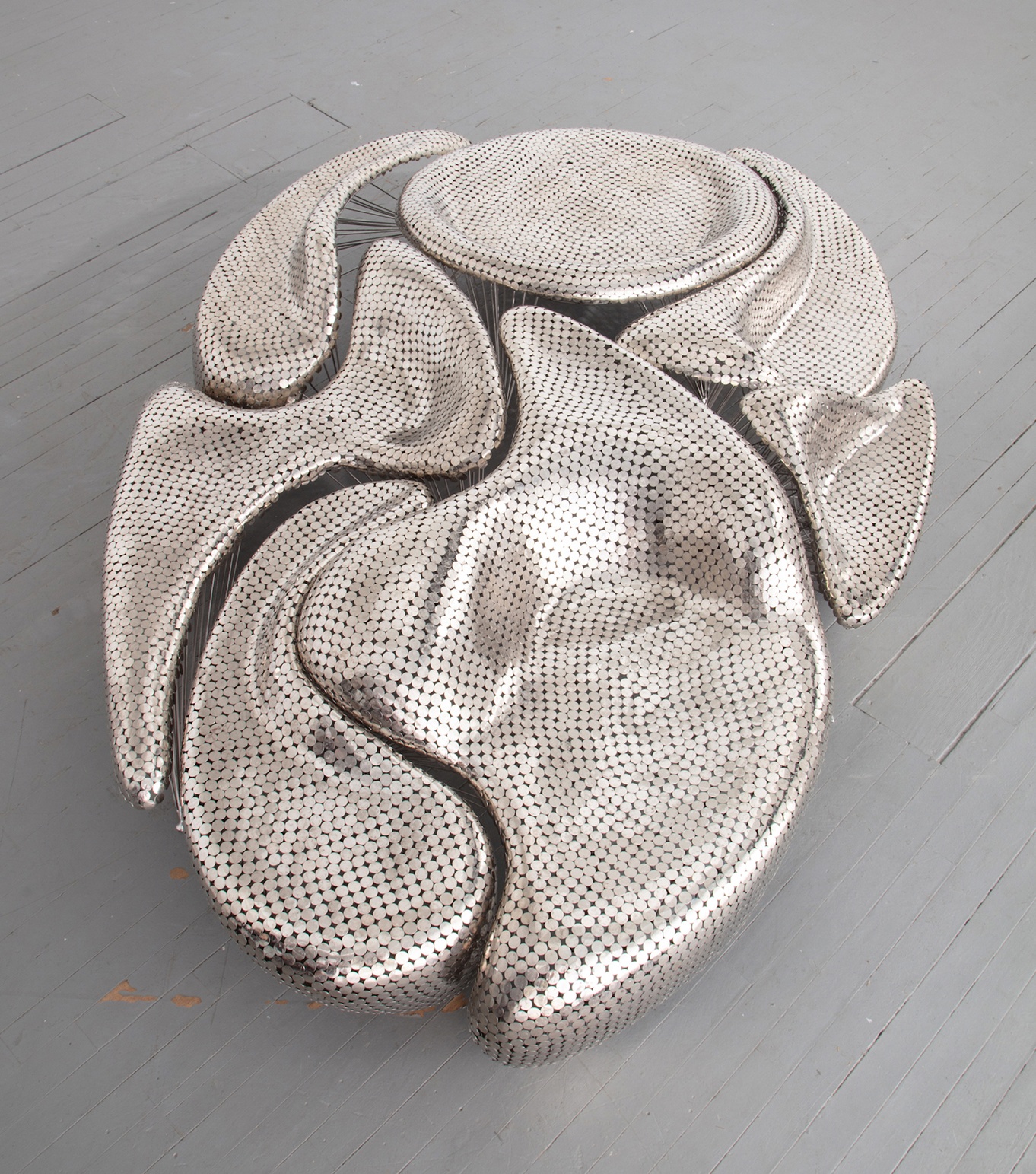 A silver version of Septum Maria with the pieces nested together. Photo: JOE KRAMM COURTESY OF R & COMPANY 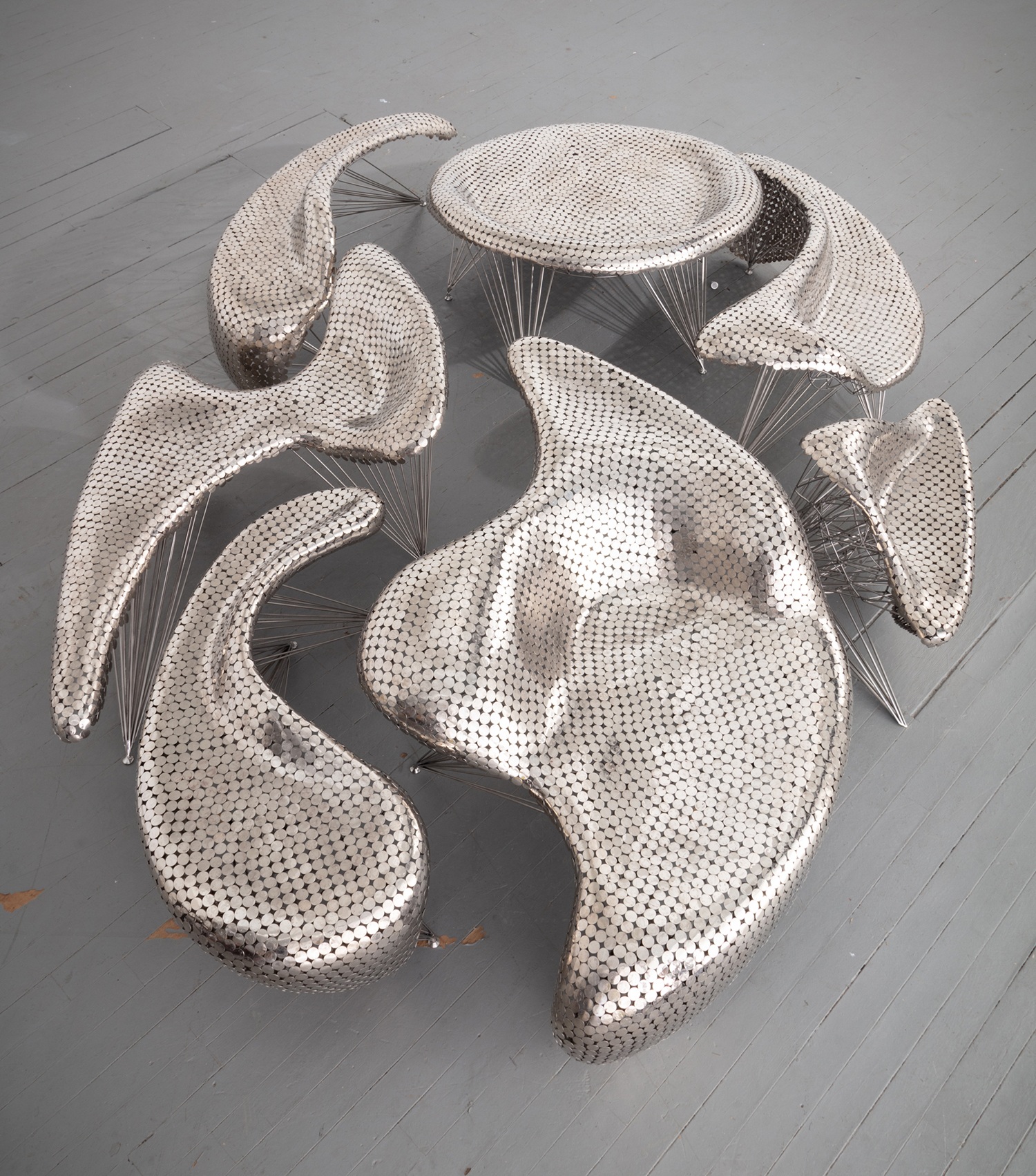 Swing’s elaborate process, which includes welding the coins on concrete molds, evolved from his first forays experimenting with pennies. “People were discarding them, and the government was occasionally rejecting them as currency,” he says. “I like the fact that from the distance you really just focus on the shape of my work and as you get closer you see all of the definition and focal points.” But what he loves most is when collectors buy the pieces and make their own interpretations. “I try not to label the work for the viewer; people can call the work whatever they like. My hope is just that it is being enjoyed and used.” 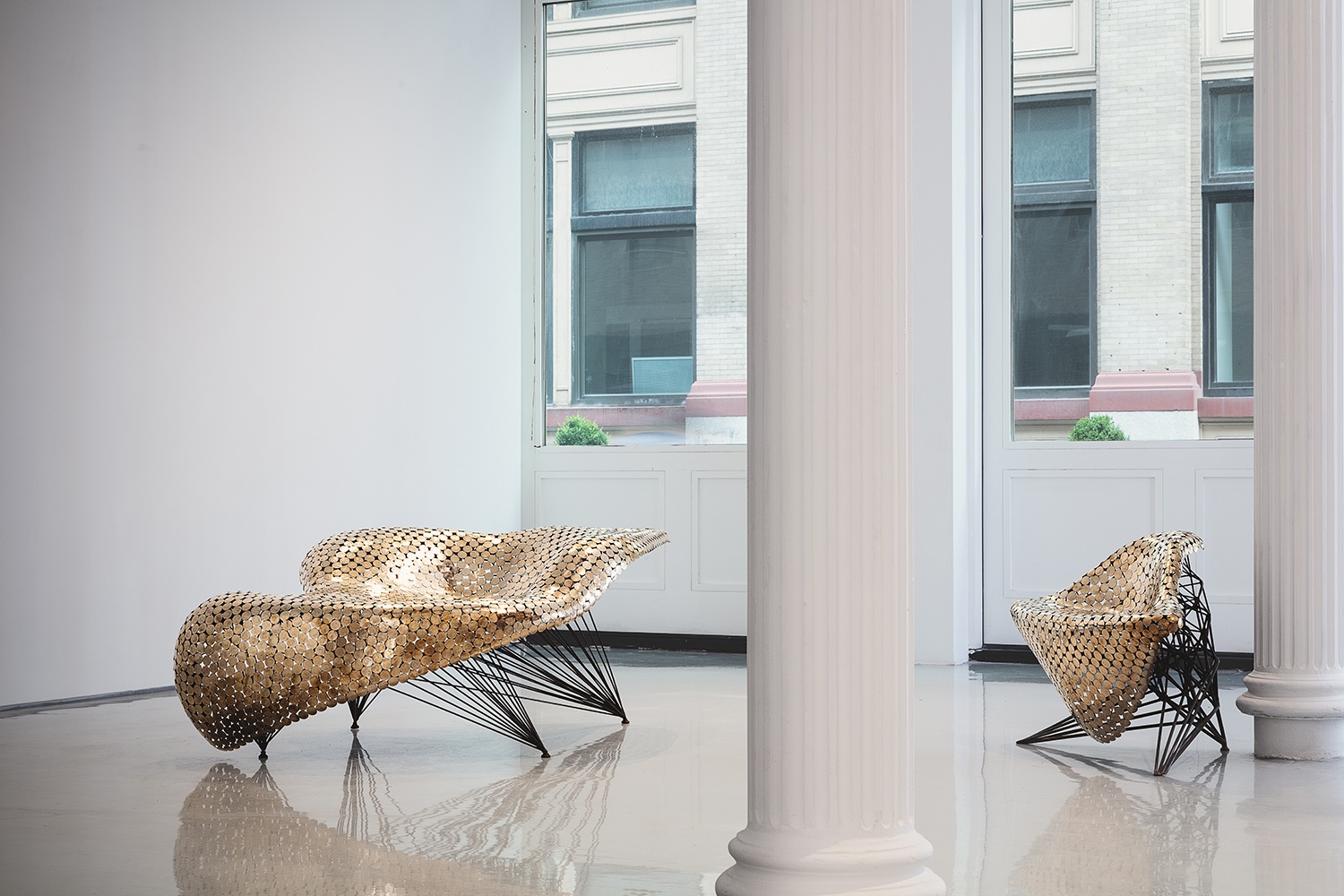