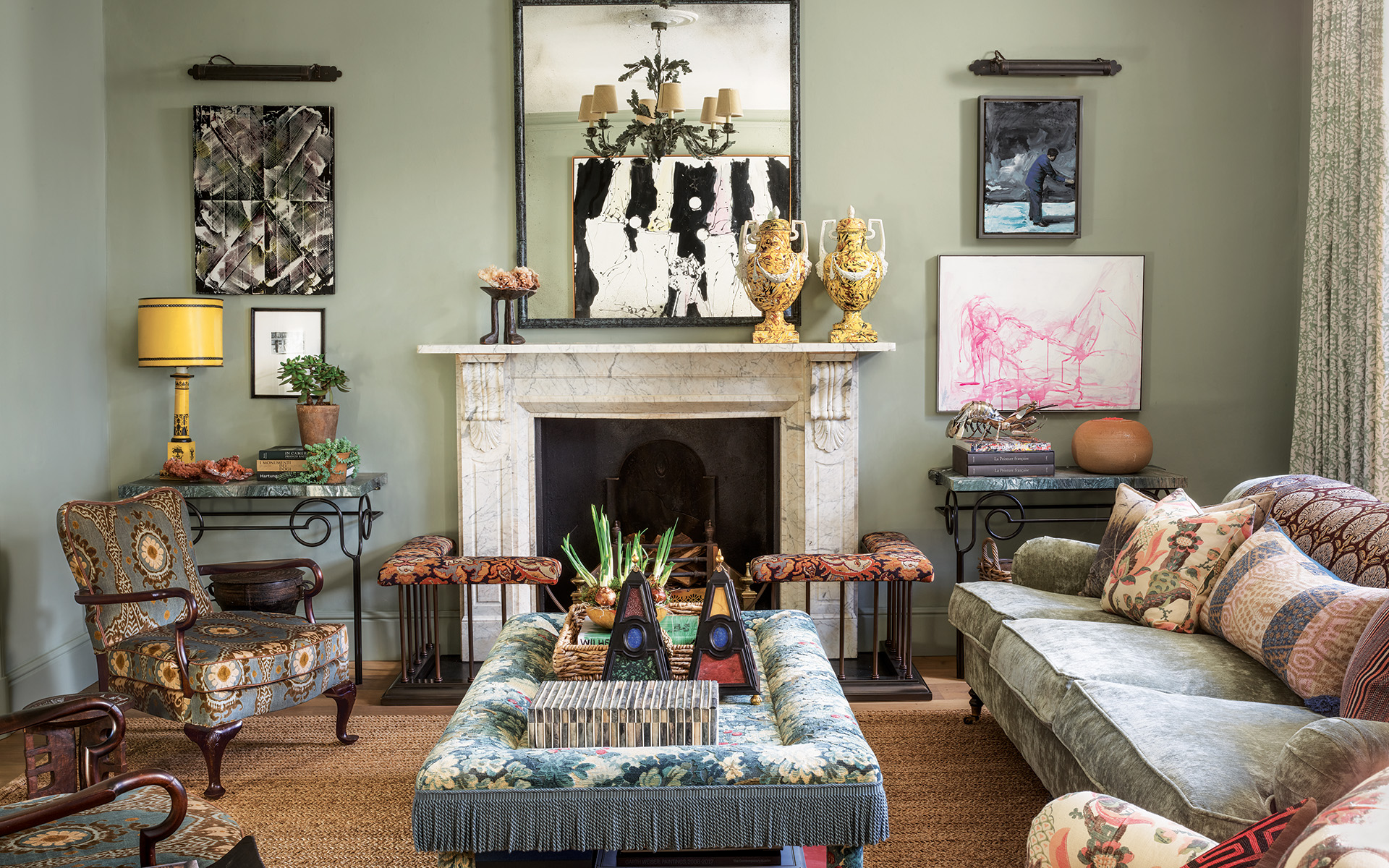 With creative nods to traditional British style, the designer refreshes a historic townhouse for a couple with a deep love of contemporary art

“I don’t like to rip the soul out of a house,” says Hubert Zandberg, the South African interior designer, who settled in London 25 years ago. So it was all the better that, for a project in London’s Notting Hill, which was started in 2019 and finished (thanks to COVID-19) two and a half years later, he had plenty of spiritual, as well as spatial, real estate to play with. The five-story house, built around 1860, had hardly been changed in its lifetime. Its previous owner, the redoubtable Irene Beard, known as the Lady Builder for her unique position as the city’s first female contractor, had known when to leave best alone. 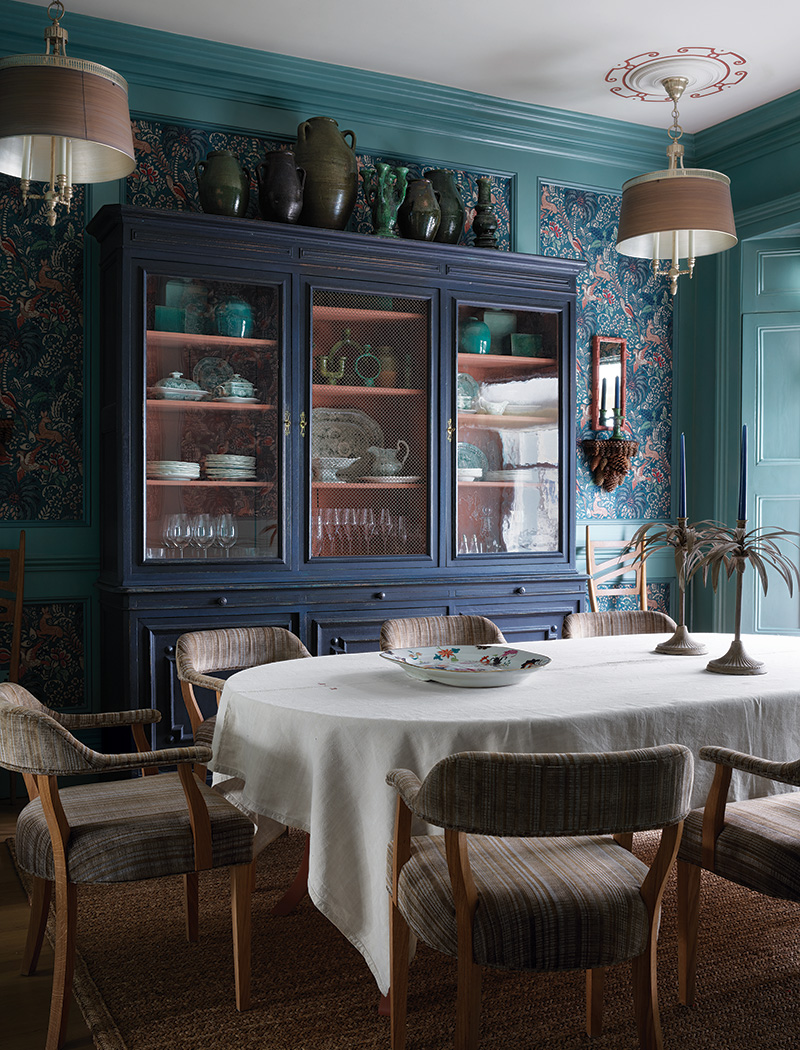 A richly patterned GP & J Baker fabric sheathes the paneled walls in the dining room, where Hubert Zandberg installed sconces made with Thomas Boog brackets on either side of a vintage cabinet. Empel Collections lights hang above the table, which is topped with 1960s palm candlesticks and surrounded by Rupert Bevan chairs. Photo: Simon Upton

The new owners, a French couple with two young children, brought with them an impressive art collection and an understanding that they were taking on a distinctly British dwelling. In the back, a tiny gate at the end of the home’s own private garden leads to an expansive shared one of green lawns and ancient oak trees. “Once you close the front door, you leave the city behind and pivot immediately toward this almost country-like scenario,” says the wife. “You can’t understand the house without knowing the garden,” her husband adds. 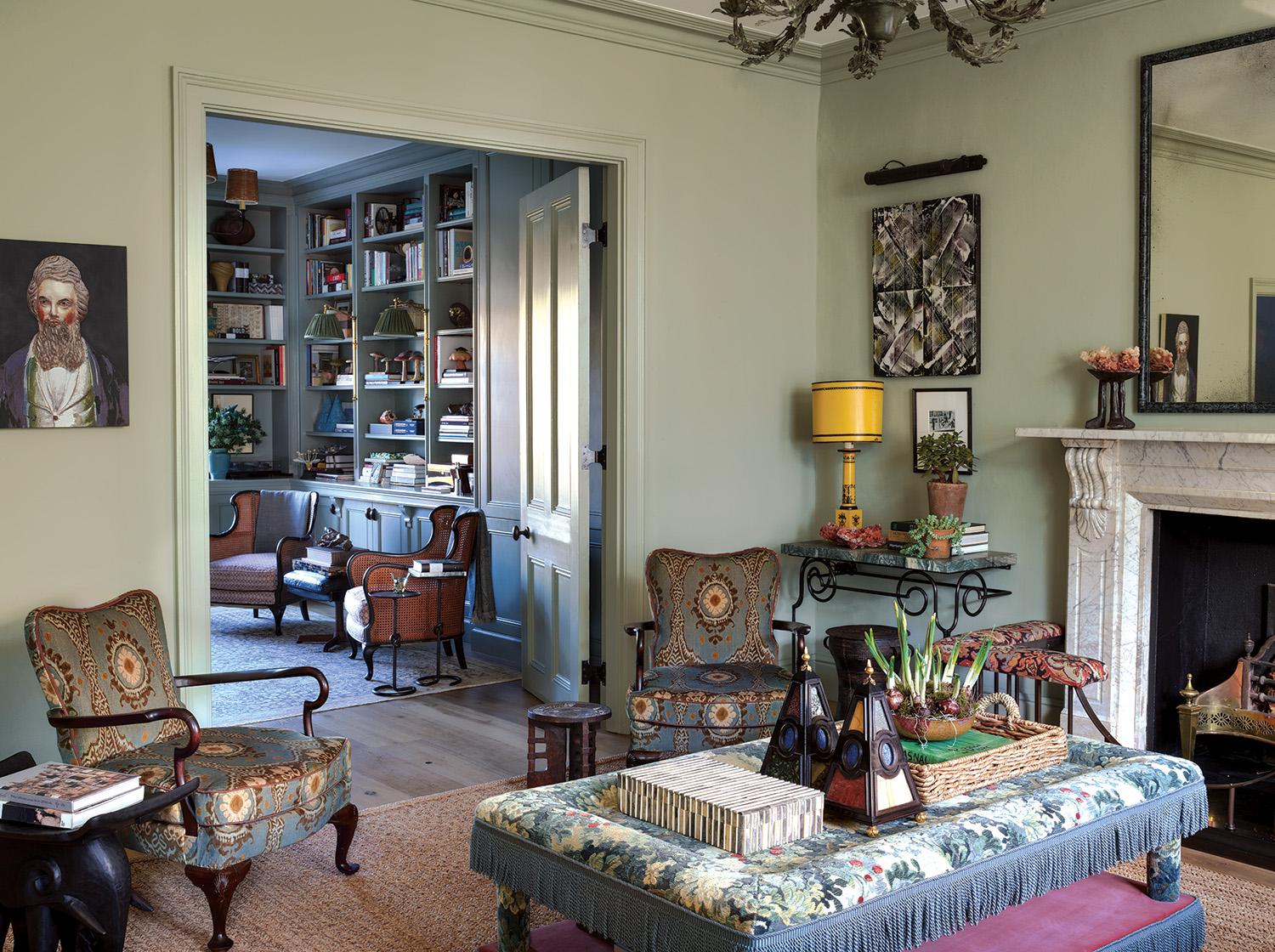 An artwork by Mathew Weir is displayed next to the doorway between the drawing room and library; African stools serve as low tables, and the yellow lamp was a flea market find in Paris. Photo: Simon Upton

The project was the couple’s first with Zandberg, who says he makes it a rule not to Google new clients in advance. “I’m more interested in what they reveal to me in our meetings,” he says. In this case, it was Monsieur’s extreme precision, Madame’s deep love of color, and their shared passion for contemporary art. “At our first presentation, she brought along some cherry pinks—lovely but hard to live with,” says Zandberg, who cleverly wove them into details throughout. Most significantly, they pop out in the patchwork of kilims used by Sinclair Till to create the unifying stair runner that climbs all the way up the house.

Zandberg is known for knitting together the historic and contemporary with a lavish but considered use of pattern and sensuous materials, an approach that can be seen in the first-floor drawing room. Here, a plush green-gray velvet sofa is grouped with an upholstered ottoman table and armchairs that Zandberg enveloped in richly printed floral and ikat-inspired textiles, all in muted tones. “The approach was a soft play on English traditional with a bohemian Notting Hill twist,” says the designer. The palette works in favor of the art: A Tracey Emin nude painting in rose pink loses none of its erotic edge in this setting. 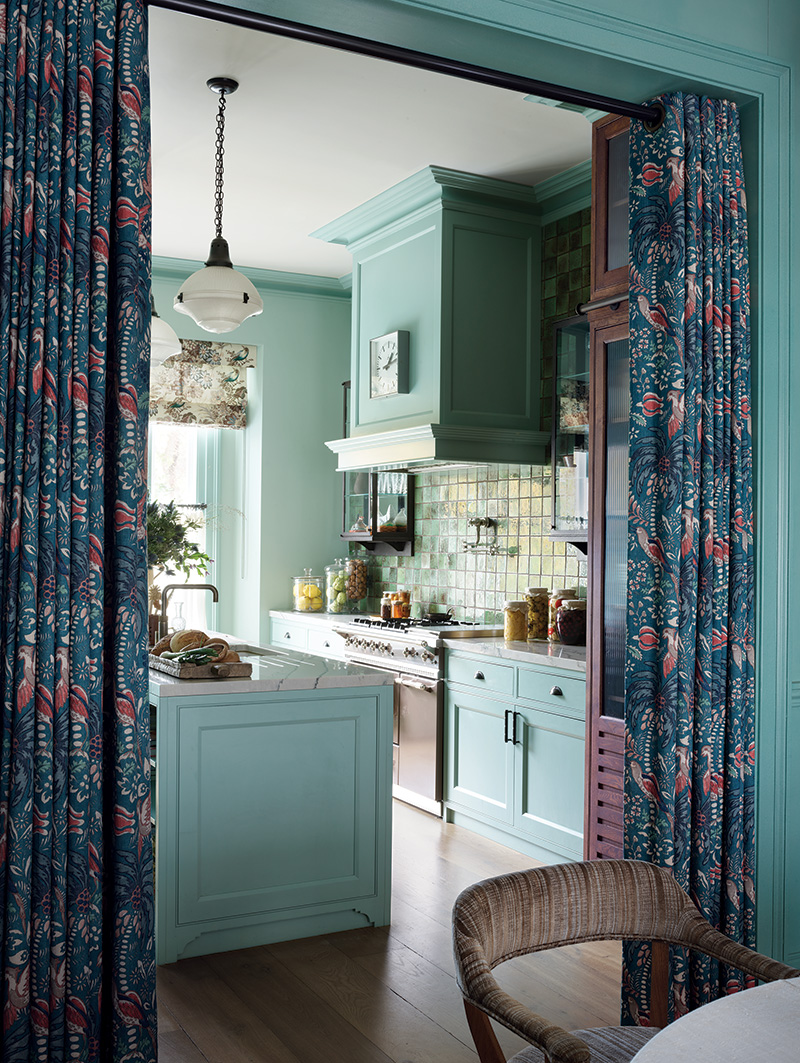 Zandberg used the same GP & J Baker fabric that covers the dining room walls to make curtains for the opening to the kitchen, which is outfitted with Hector Finch pendants, quartzite countertops, a custom-glazed tile backsplash, and cabinetry designed by Zandberg. A vintage French factory clock is mounted on the hood over the Lacanche range, and the window shade is made of a Mulberry Home fabric. Photo: Simon Upton

In the kitchen, there are nods to French country, with a floral Roman blind raised across the top of the window overlooking the garden, green-glazed terra-cotta tiles above the Lacanche range, and a mix of painted and stained wood cabinetry for storage. The adjacent dining room is lined in an exuberant wall covering depicting deer and partridges that seem to have leaped out of a 16th-century tapestry. For the lighting, Zandberg hung a pair of pendants and installed candles on bespoke pine cone brackets by Thomas Boog, best known for his shell pieces. “I really dislike a single chandelier over a dining table,” says the designer. 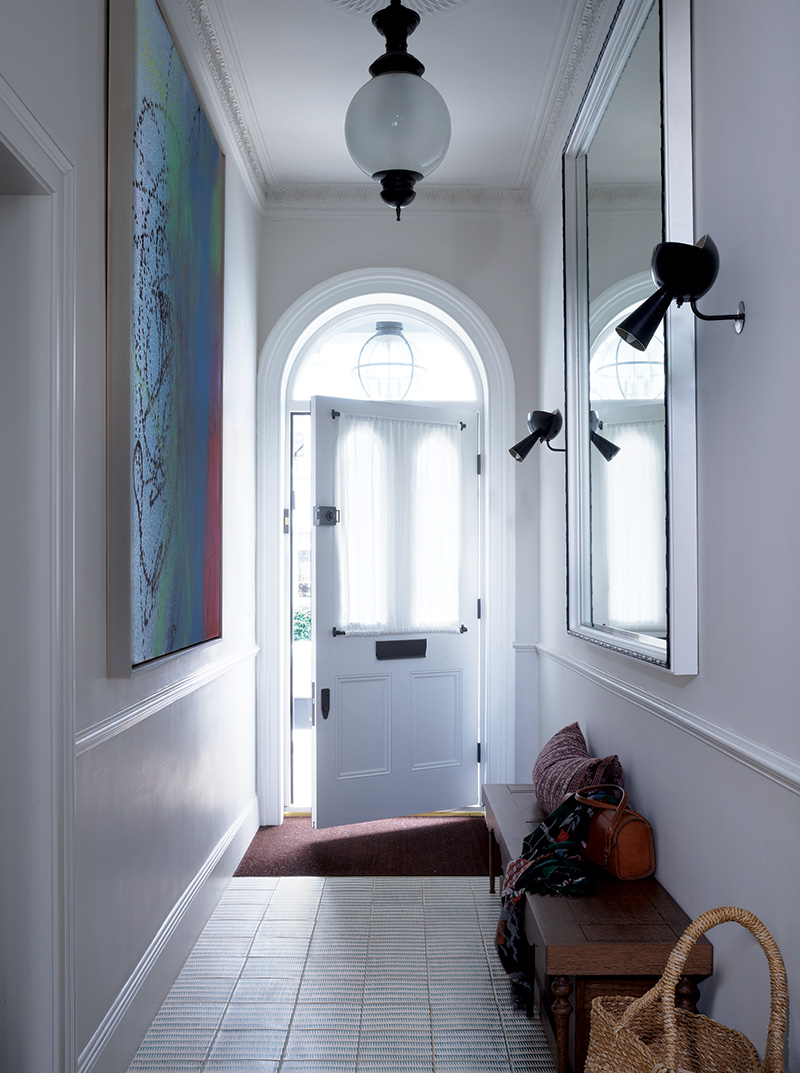 In the entrance hall, beneath a pendant from Max Rollitt, a Hans Hartung painting hangs across from a custom- designed mirror and bench and Serge Mouille sconces; the floor tile is by De Ferranti and the coir mat is by Sinclair Till. Photo: Simon Upton 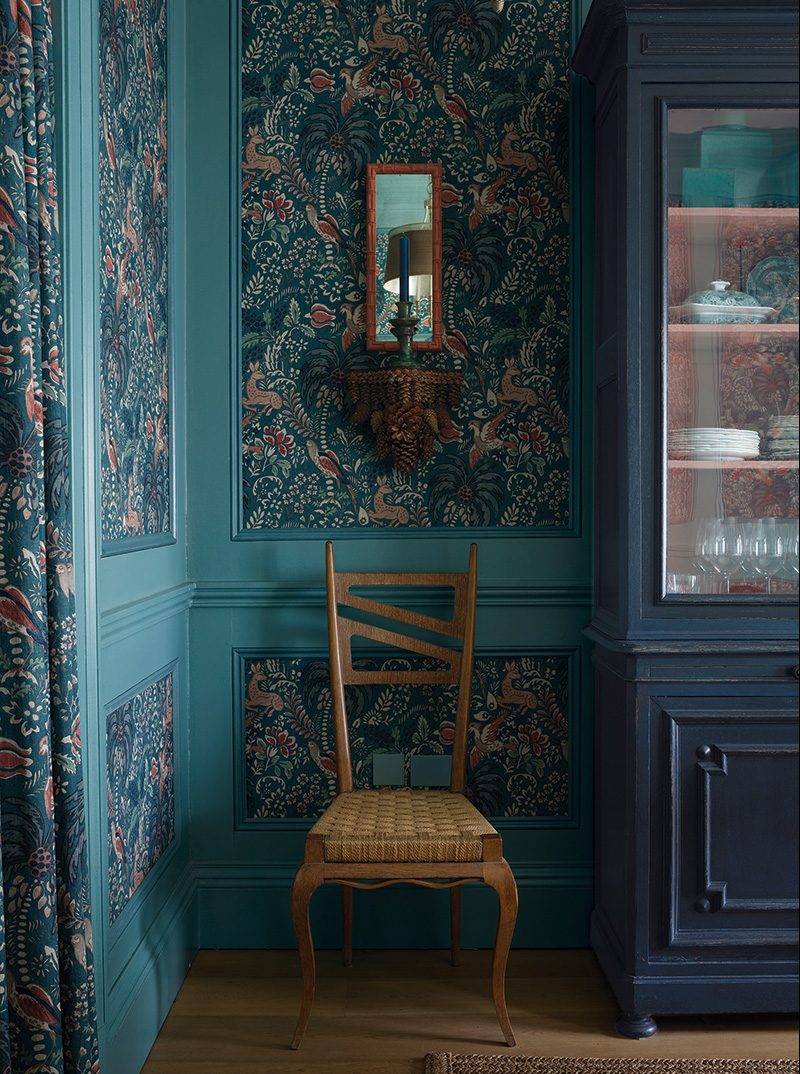 The vintage side chair is one of a pair from Lee Wright Antiques installed in the dining room. Photo: Simon Upton

The owners understood that preserving the home’s historic interior would limit available wall space. “We didn’t want to turn it into a big white box,” the husband explains, even though that would have made it easier to accommodate more expansive artworks. Notably, a large painting by Hans Hartung that originally hung in the rather narrow entry hall has since been taken down for fear of damage. But an even more monumental Georg Baselitz painting has found its place as an anchor in the drawing room. Appearing at first as an abstract work, it reveals upon further inspection a couple holding hands. “It’s a symbol of our life,” says the husband, who describes their collecting as consensual and “art as a window into other worlds, a way of traveling.” “We always buy together,” his wife says. “We tend to have the same taste. We’re drawn to the same things.” 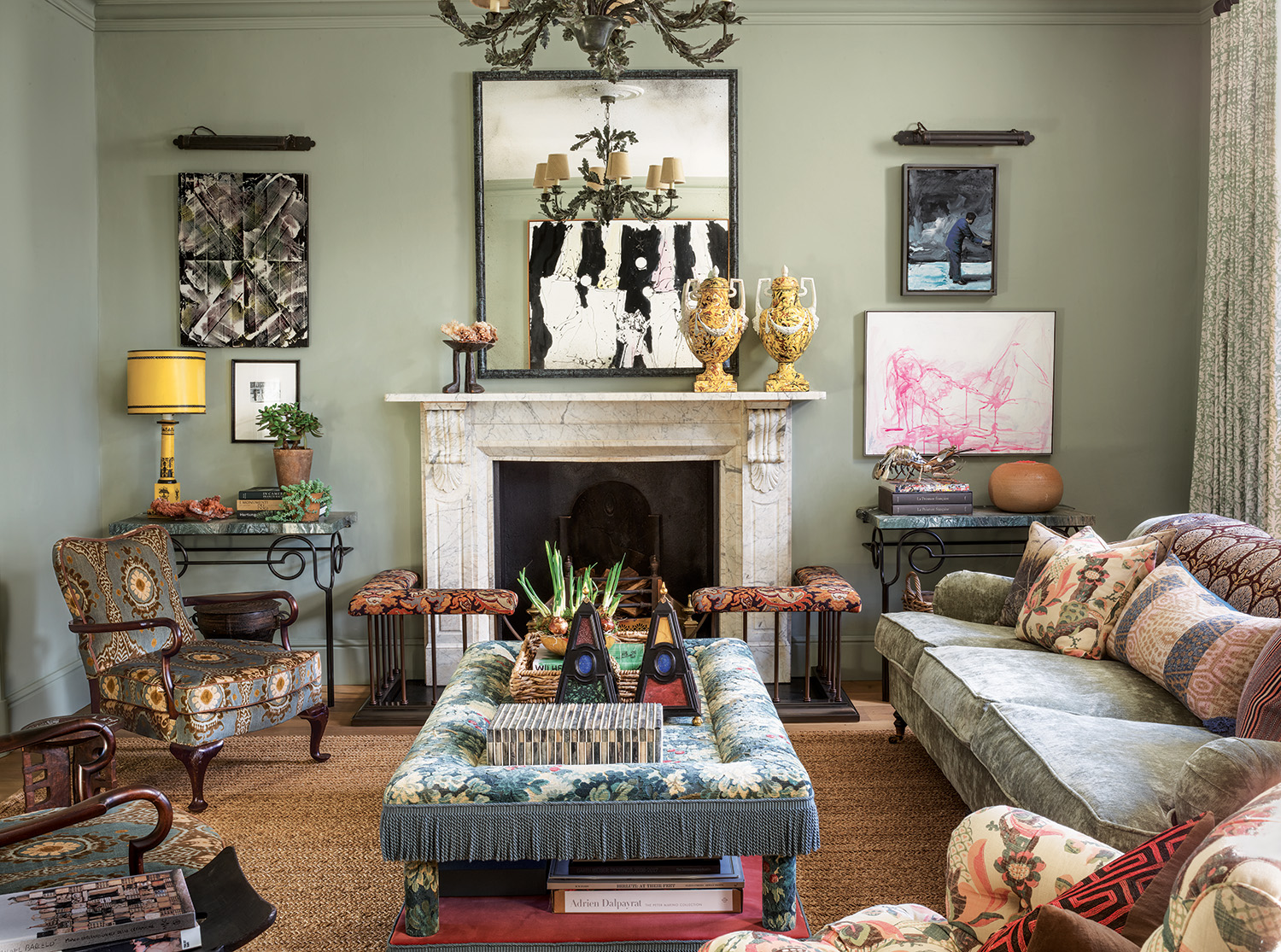 Beneath a Richard Taylor Designs chandelier, a velvet-clad George Smith sofa faces a custom-made ottoman table and vintage chairs upholstered in floral and ikat-inspired fabrics in the drawing room of a Notting Hill townhouse renovated by designer Hubert Zandberg. Flanked by a Florian & Michael Quistrebert painting on the left and works by Mircea Suciu (top) and Tracey Emin on the right, a bamboo mirror by Collier Webb is mounted over the original mantelpiece, which hosts a pair of 20th-century marbleized urns. The artwork reflected in the mirror is by Georg Baselitz. Photo: Simon Upton

Two Edward Kienholz paintings of dollar sums hold court at the first turn of the stair, while a dazzling Eric Fischl artwork depicting a dancer in pinks and ochers presides over the second turn. “We weren’t keen on hanging pictures on the staircase,” the wife says. “But that one works quite well because you approach her as you walk up the stairs. It’s really special.” 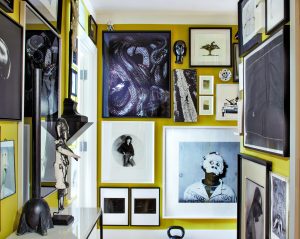 Zandberg describes the collaboration with his clients as being like “a dinner conversation—it went around and around, from challenging to fun and back again.” One area where they definitely had some fun was the home’s lowest floor, previously an untouched rabbit warren of rooms that they opened up to create an inviting family lounge. It now contains some of what the owners call their toys: a wine cellar, a pull-down cinema screen, and a hidden bar and kitchen, as well as an en suite guest room. Plus, there’s an alcove of shelves, painted deep golden yellow, for displaying whatever treasures these avid collectors bring home next.

A version of this article first appeared in print in our 2022 Winter Issue under the headline “English Accents.” Subscribe to the magazine. 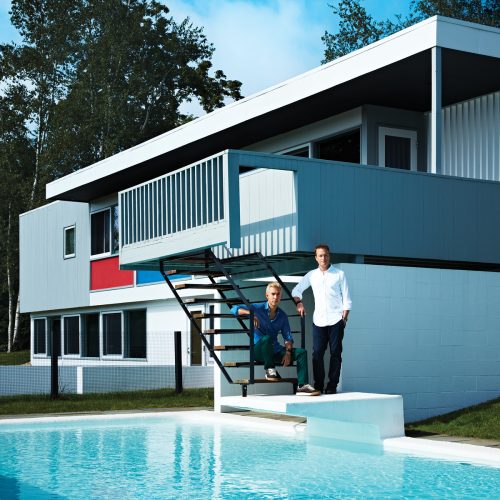