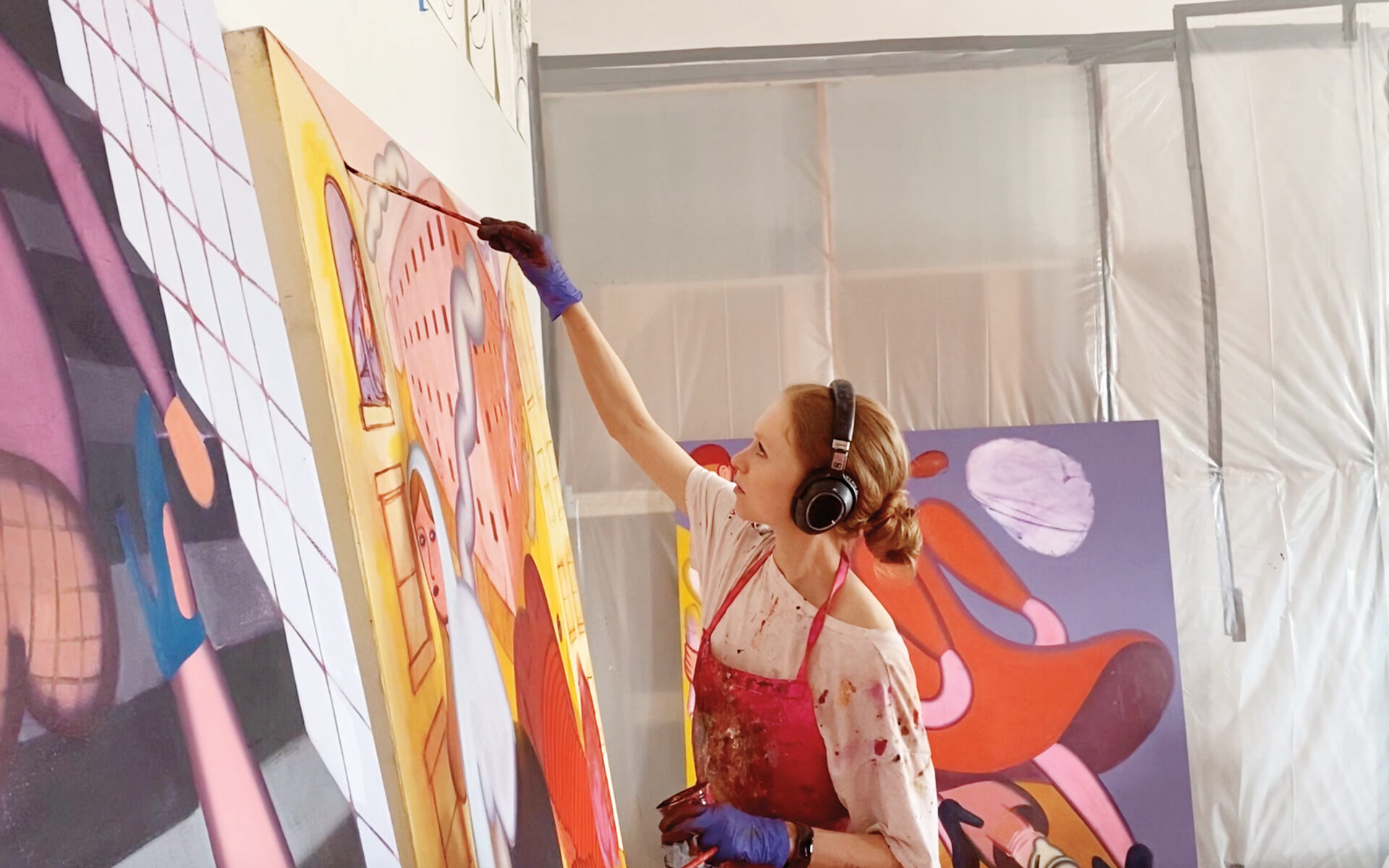 “It’s a strange time to be a painter,” says Brooklyn artist Grace Weaver, whose recent James Cohan exhibition, “Steps,” coincided with the art world’s reopening in New York. “You hope your work has something meaningful to say about the world. But that’s quite challenging when the news is so shocking, extreme, and fast-paced. Painting is much better at telling longer, slower stories.” 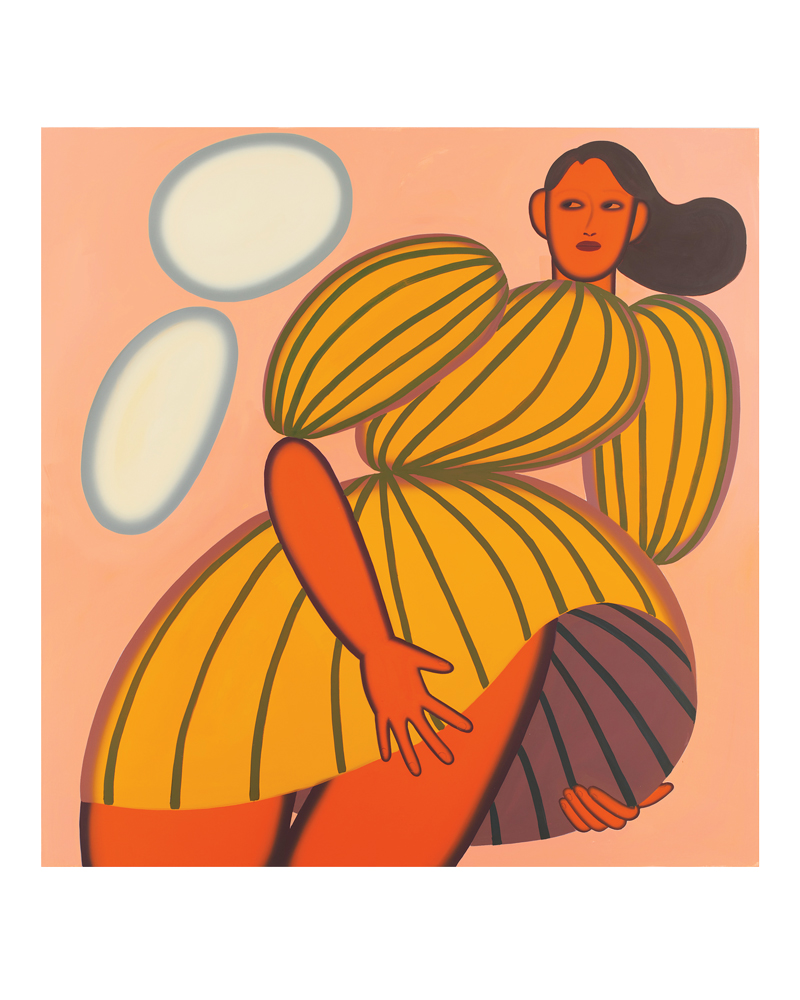 And yet her latest output captured all of the current angst. The multilocation exhibition featured charcoal drawings at one of the gallery’s venues, figurative canvases at the other, all created since January. Weaver’s signature characters—elastic-limbed to nearly cartoonish effect—collide down flights of stairs and into one another on an abstracted sidewalk-scape. Her theatrical compositions capture the tiny oscillations of confidence and unease that pervade daily urban routine.

“I want there to be an attraction and a repulsion, a beauty and a discomfort”

“When I started these paintings, mostly before the pandemic, I was already concerned with the idea that being in a public space is a kind of choreographed dance,” she says, reflecting on the coincidental subtle menace so many pedestrians now feel. “People are always conscious of their appearance and suspicious of others, evaluating everyone around them. The pandemic has exaggerated those interpersonal dynamics. Scenes I was thinking about became much more dramatically present.” 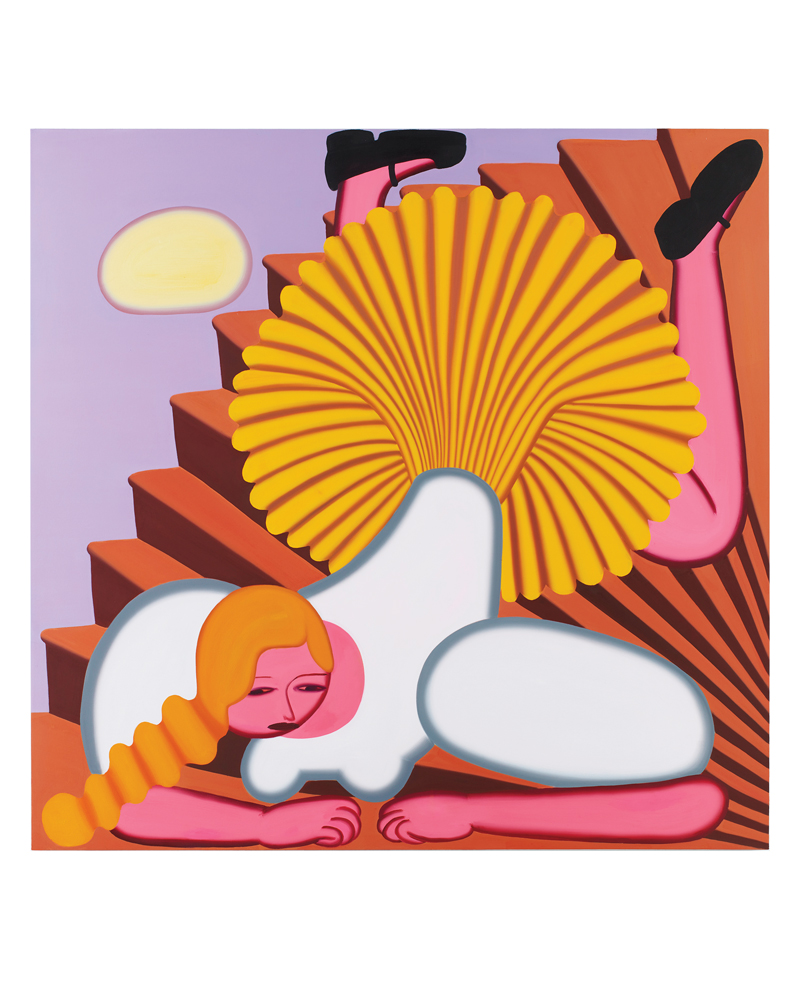 Weaver, whose work is found in the collections of Frac des Pays de la Loire in France and Denmark’s ARoS Museum, cites Pop guru Peter Saul as inspiration for achieving the grotesque, funny, and strange, as well as iconic New Deal WPA murals. Viewers will also find references to Pablo Picasso’s crying women and Cubist female portraits. For Weaver, palette always tells an emotional story: Stunt (2020) exposes a lady in a neon-pink dress and terra-cotta spray tan who has fallen to her hands and knees. “While there are still a lot of bright colors, I pushed myself to include these kinds of gross, weird browns,” she says. “I want there to be an attraction and a repulsion, a beauty and a discomfort.”

A version of this article first appeared in print in our 2020 Fall Issue under the headline “Different Strokes.” Subscribe to the magazine.