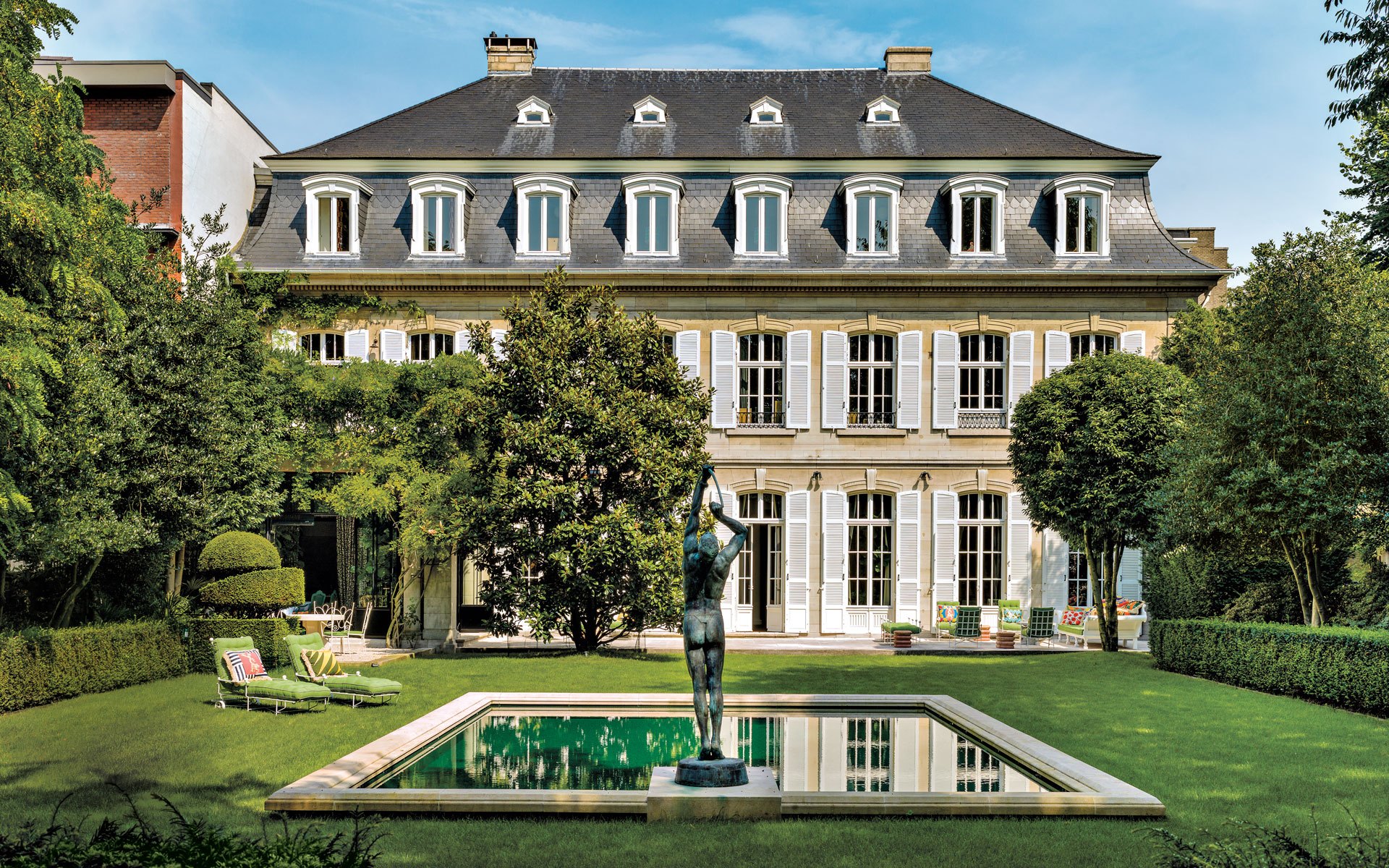 Inge Onsea and Esfan Eghtessadi, the couple behind the fashion brand Essential Antwerp, hired designer Gert Voorjans to revamp a former French consulate into their family home in Antwerp. A sculpture of an archer by Herbert Ward stands at one end of the pool.
Photo: JOSÉ MANUEL ALORDA

Homey is hardly the first word one would have used to describe Hôtel Villinger, the stately neoclassical manor that long served as the French consulate in Antwerp. Although it was built as a private residence in 1910 by German architect Paul Schultze-Naumburg, the building was bought by the French government after World War II and its interior converted to anonymous offices and reception areas. “Over time, all the character had been squeezed out of the house,” says Gert Voorjans, the Antwerp-based interior designer who was enlisted to give the place a makeover when it was acquired by a pair of Belgian entrepreneurs several years ago. 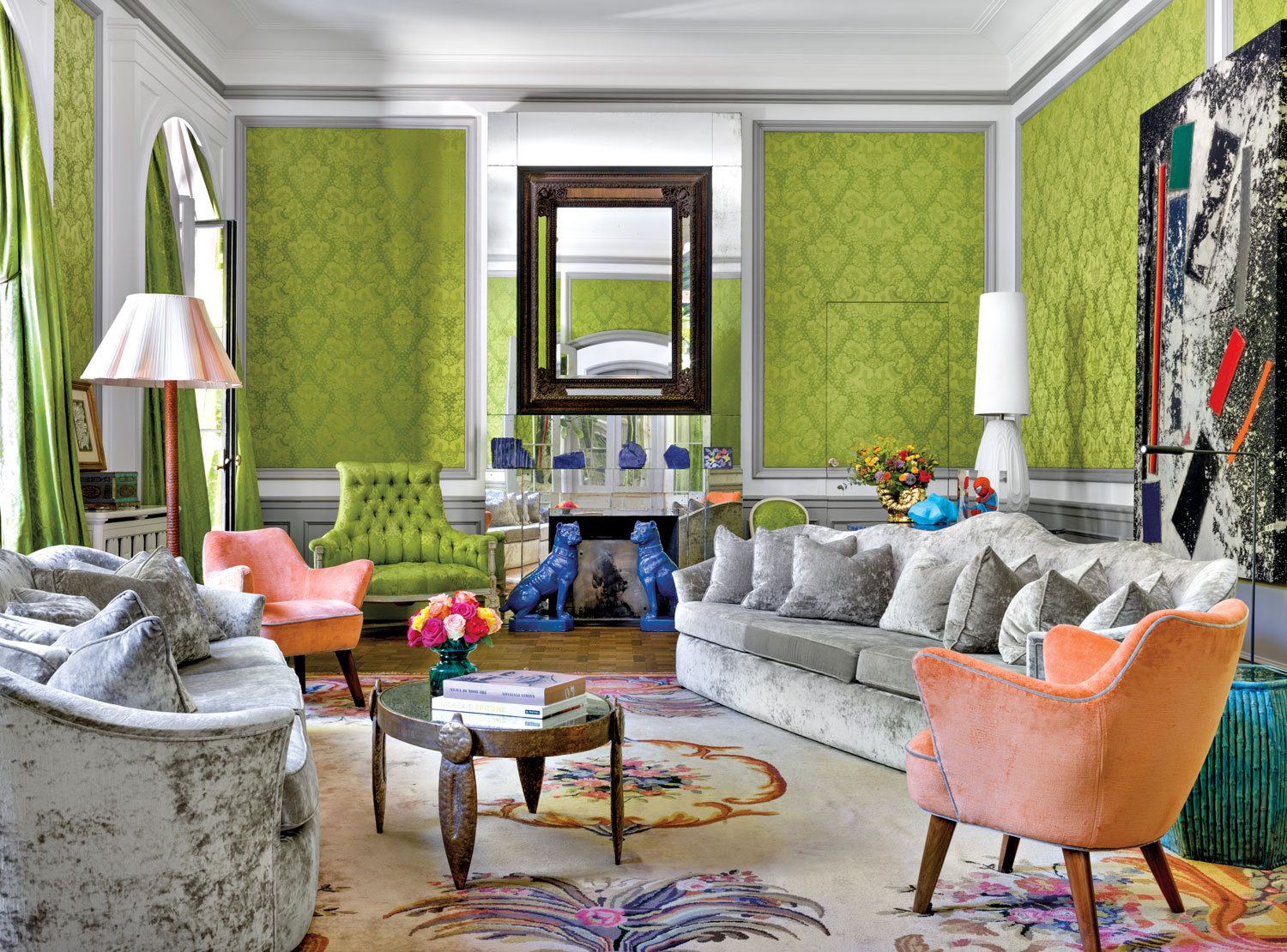 A large Sterling Ruby painting provides a striking contrast with panels of Tassinari & Chatel chartreuse damask in the salon, where velvet-clad 19th-century Italian sofas are joined by a green settee from the original Concorde waiting lounge. The mirror is French neo-Renaissance, the lapis lazuli–color Lunéville dogs are antique, and the Aubusson carpet is from the 1930s. Photo: JOSÉ MANUEL ALORDA

Esfan Eghtessadi and Inge Onsea, the husband-and-wife team behind the fashion brand Essentiel Antwerp, turned to Voorjans to reinvent the bourgeois building as their family home. With a dash of imagination, one might even compare the results to a haute couture runway show: the parade of shifting colors, the exquisite craftsmanship, the array of historical references.

“I don’t interfere with the owners’ contemporary art collection. A house cannot be a straitjacket in which there is no scope for the clients’ input”

Hôtel Villinger can also be seen as a self-portrait of its flamboyant owners. Dynamic entrepreneurs, Onsea and Eghtessadi adore contemporary art, bold fashion, parties, and humor. A sense of ebullience jumps out at you from the walls. Take the former winter garden, a space Voorjans recast as a glamorous, jungle-themed dining room. The mirrors create the illusion of being enveloped by the greenery of the garden indoors. Funky floral upholstery and curtains made of a graphic black-and-white silk add to the luxuriously whimsical effect. 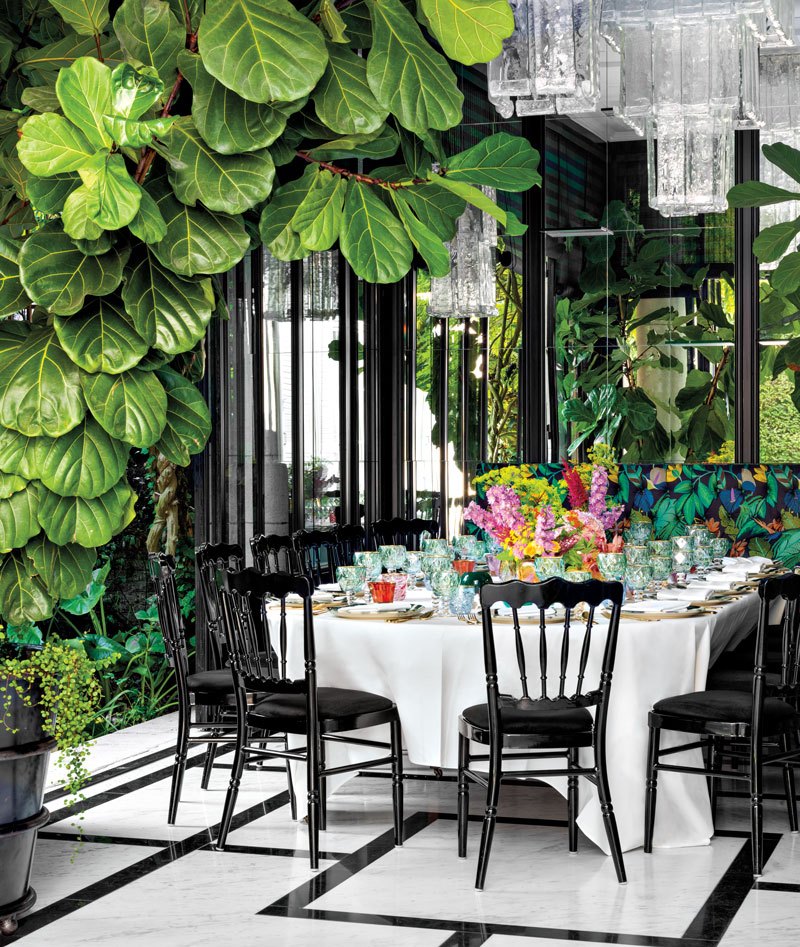 Lush plantings and mirror-paneled walls lend an exotic air to the dining room; the Napoleon III chairs are finished in black lacquer, and the floor is inlaid with rectilinear patterns of glossy dark rosewood. Photo: JOSÉ MANUEL ALORDA

“Hôtel Villinger was commissioned at the start of the last century by Walter Villinger, a German businessman whose firm’s imports included exotic woods through the Port of Antwerp,” says Voorjans. The designer deliberately referenced that history, including in the alluring ground-floor smoking room, where bespoke paneling in polished Indian rosewood conjures an opulent colonial ambience.

Schultze-Naumburg designed the mansion to accommodate live-in staff and for receiving official guests around the central staircase in the entrance hall. “That Belle Epoque fuss around reception and service is inconsistent with contemporary comfort,” says Voorjans. “I wanted to make sure visitors would be immersed in the spirit of the home as quickly as possible.” 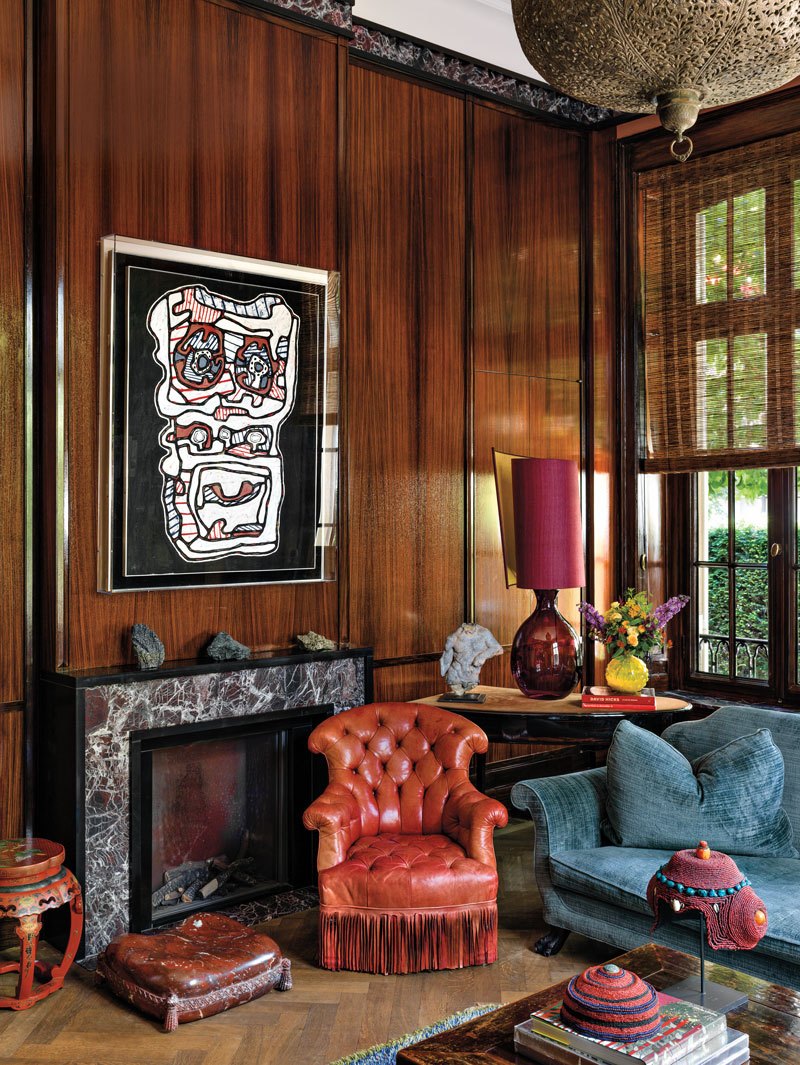 Walls of Indian palisander line the library, where a work by Jean Dubuffet is installed over the Rosso Levanto marble fireplace. A 19th-century ajouré metalwork lantern from India hangs above a claw-foot antique sofa, a Napoleon III chair in tufted Moroccan leather, and an 18th-century Tuscan floor cushion. Photo: JOSÉ MANUEL ALORDA

It is in the stair hall, which retains its original wainscoting and parquet flooring, that the formality of Schultze-Naumburg’s architecture is most tangible. To soften the rigidity of this space, Voorjans broke through one wall to create a new vista, framed by ionic columns, through a salon and out to the garden. But what really propels the space into the present day is the selection of modern and contemporary artworks.

Nowhere is the mix more daring and erudite than in the adjoining salon. Subtly alluding to the home’s consulate past, Voorjans mounted a French Renaissance Revival trumeau mirror atop a reflective fireplace surround, which he designed in an Art Deco spirit. The dialogue continues with the Aubusson rug and the silk damask wall covering by Tassinari & Chatel, the Lyon fabric maker founded during the reign of Louis XIV. 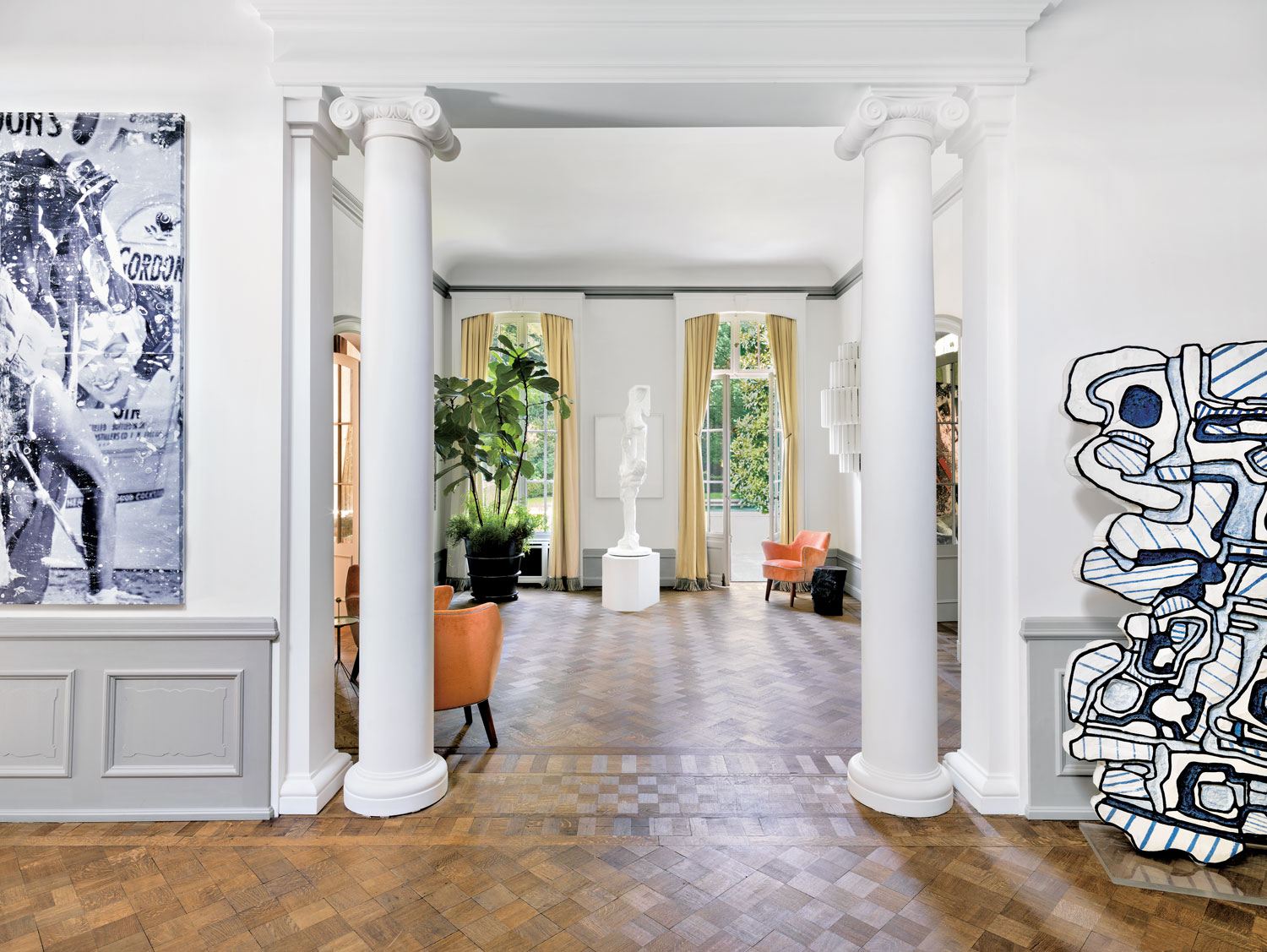 Voorjans opened up a columned doorway, flanked by a David Salle grisaille painting and a Jean Dubuffet painted sculpture; it connects the stair hall to a salon. Photo: JOSÉ MANUEL ALORDA

Countering the room’s decorative seriousness are playful pieces like a Spider-Man in Perspex and the large Sterling Ruby painting that hangs brashly over the classical moldings and wall covering, giving the space an iconoclastic kick. “I don’t interfere with the owners’ contemporary art collection,” says Voorjans. “A house cannot be a straitjacket in which there is no scope for the clients’ input. I have freely played with a stylistic program spanning 300 years. It goes without saying that I afford that same freedom to my clients.” 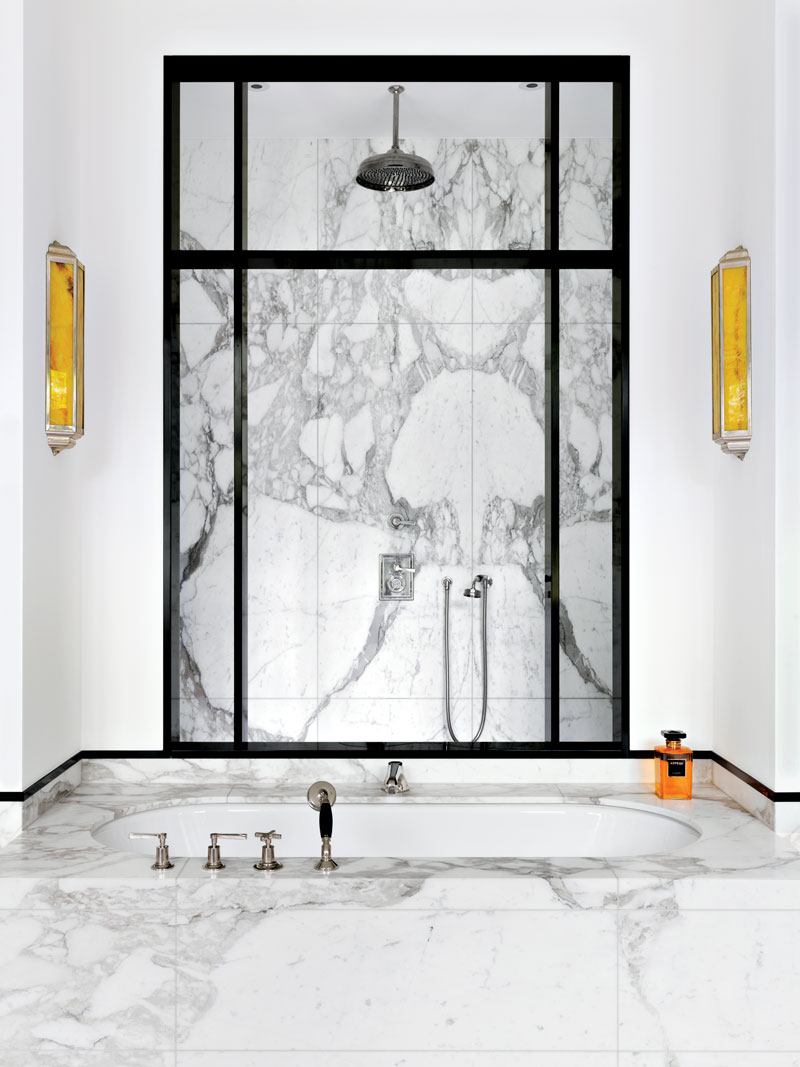 The upper floor is reserved for the private rooms. The children’s bedrooms are housed on one side, while the other contains Onsea and Eghtessadi’s master suite, sumptuously appointed in a palette of neutral tones with sunny accents. In their bath, Voorjans used an Art Deco–inspired theme, creating an exuberant hall of mirrors, framed with elegant metal trim.

“The clients are people who sleep in beautiful hotels all over the world,” says Voorjans, who conceived the master suite as a personalized hotel room. “But I guarantee you that the enfilade of bedroom, bath, and individual dressing rooms is something they never had seen before.”

A version of this article first appeared in print in our 2020 Summer issue under the headline “Artful Diplomacy.” Subscribe to the magazine.

Cover: Inge Onsea and Esfan Eghtessadi, the couple behind the fashion brand Essential Antwerp, hired designer Gert Voorjans to revamp a former French consulate into their family home in Antwerp. A sculpture of an archer by Herbert Ward stands at one end of the pool.
Photo: JOSÉ MANUEL ALORDA
Next Post