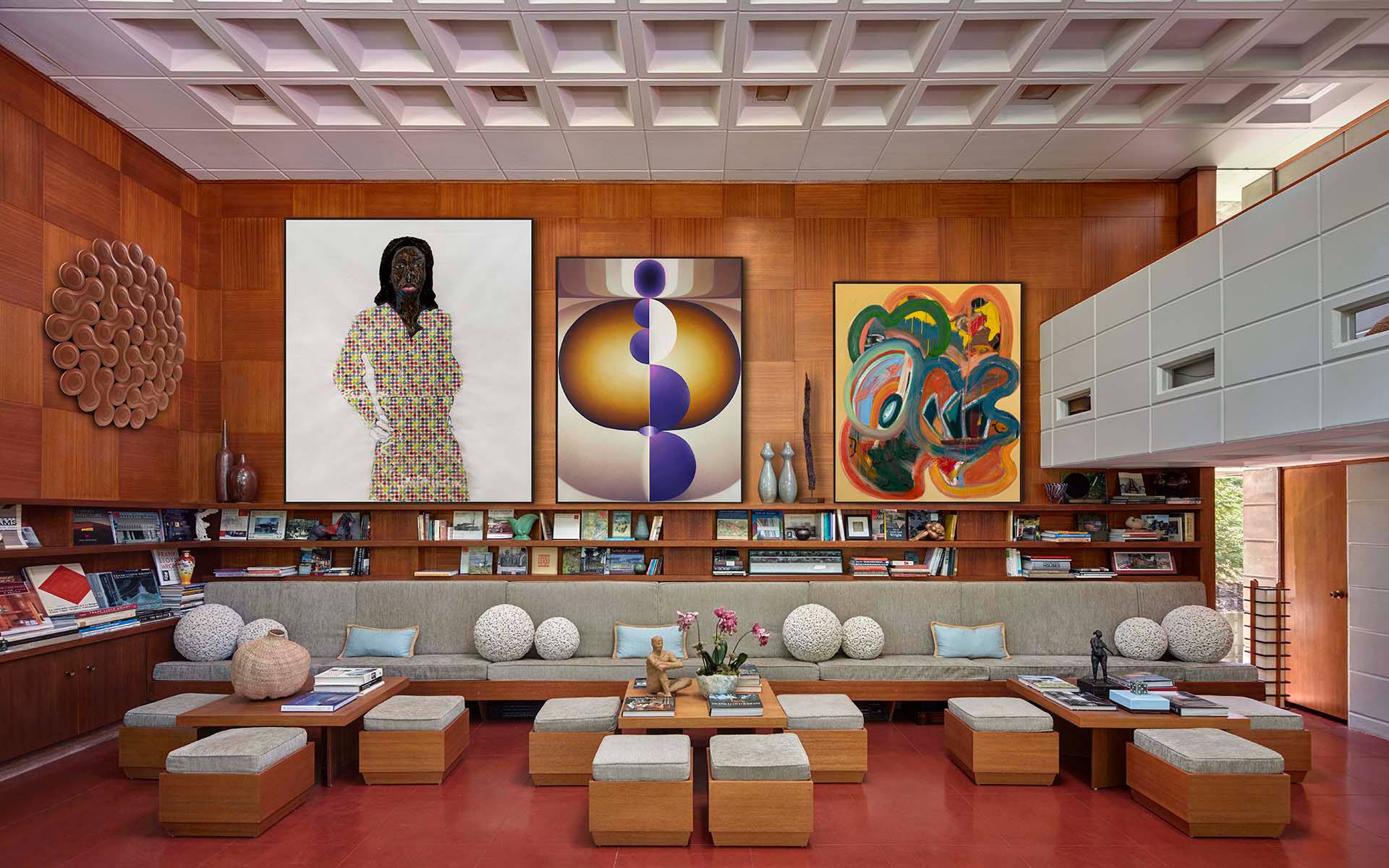 Although COVID-19 decimated art exhibit attendance around the world, Library Street Collective’s SITE series is the perfect pandemic solution because even the art does not attend.

SITE features fully-online displays in which contemporary art is virtually staged within architecturally significant spaces around Detroit, where the gallery is based. Architectural photographer James Haefner digitally and masterfully fills all the SITE exhibits with seamless perfection. As Haefner humbly tells Galerie, “I’ve been using Photoshop since the late ’90s, so my retouching skills are adequate.”

The original SITE kicked off in May 2020 as a virtual show in the city’s historic State Savings Bank, a landmark Beaux-Arts beauty that architects McKim, Mead & White completed around 1900. 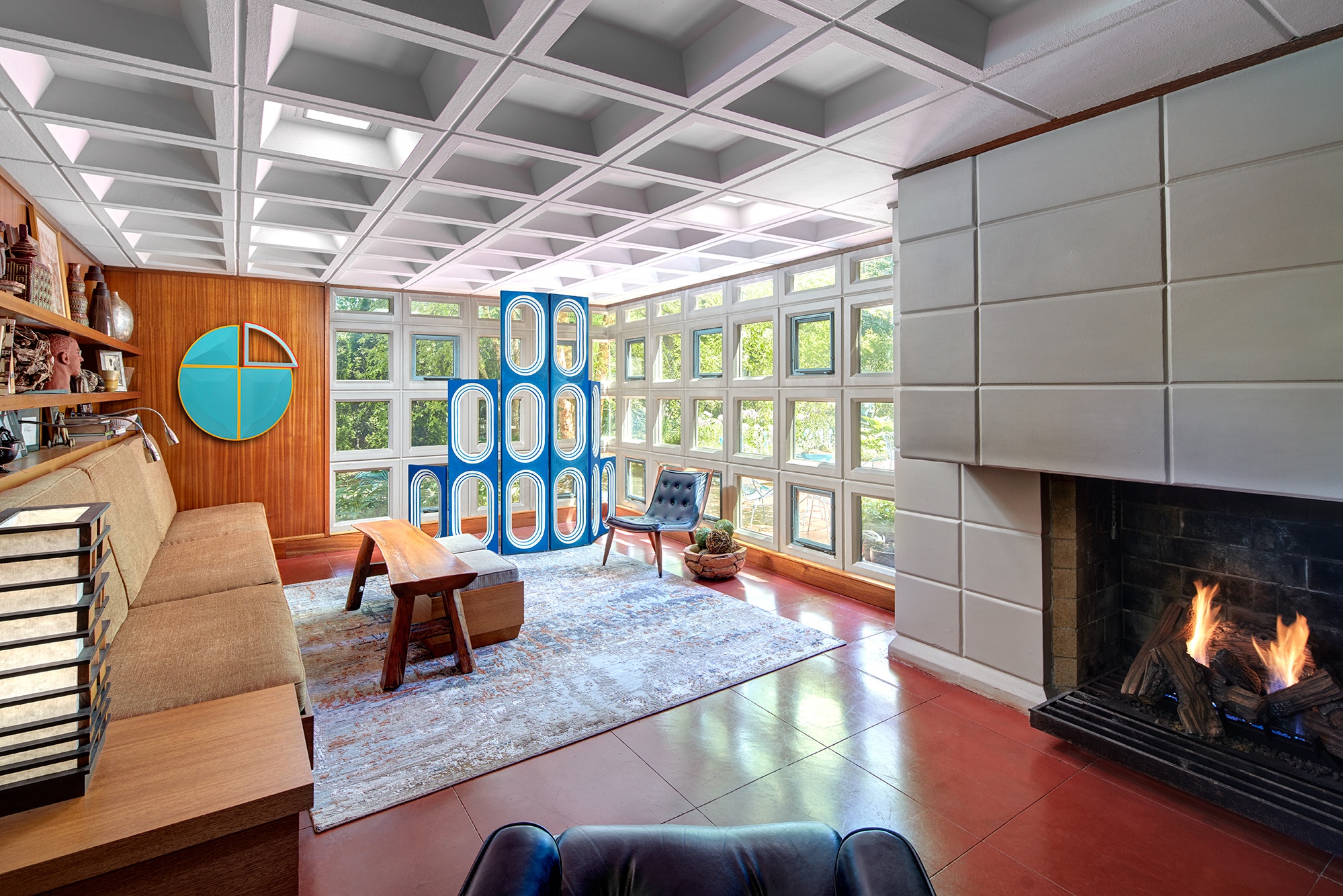 The current exhibit, “SITE 002,” is “housed” in Frank Lloyd Wright’s Usonian Turkel House, which was restored in 2006 by current owners Norm Silk and Dale Morgan, under the guidance of former Wright apprentice Lawrence Brink. The granddaughter of the original owner even provided the renovation team with a copy of the Wright’s blueprints and photos. After a four-year, $1 million renovation, the residence was revived to its original glory.

Wright coined the term “Usonian” to convey a distinctly American style of architecture free of historical restraints, the goal being to mass produce customized homes that were moderately priced in an effort to democratize the real estate market. Today, the Turkel House is one of the best preserved examples of Wright’s traditional Usonian geometry and materials, which combine to create the perfect setting for works by Frank Stella, Nick Cave, Hank Willis Thomas, Loie Hollowell, Beverly Fishman, Amoako Boafo—and many more. 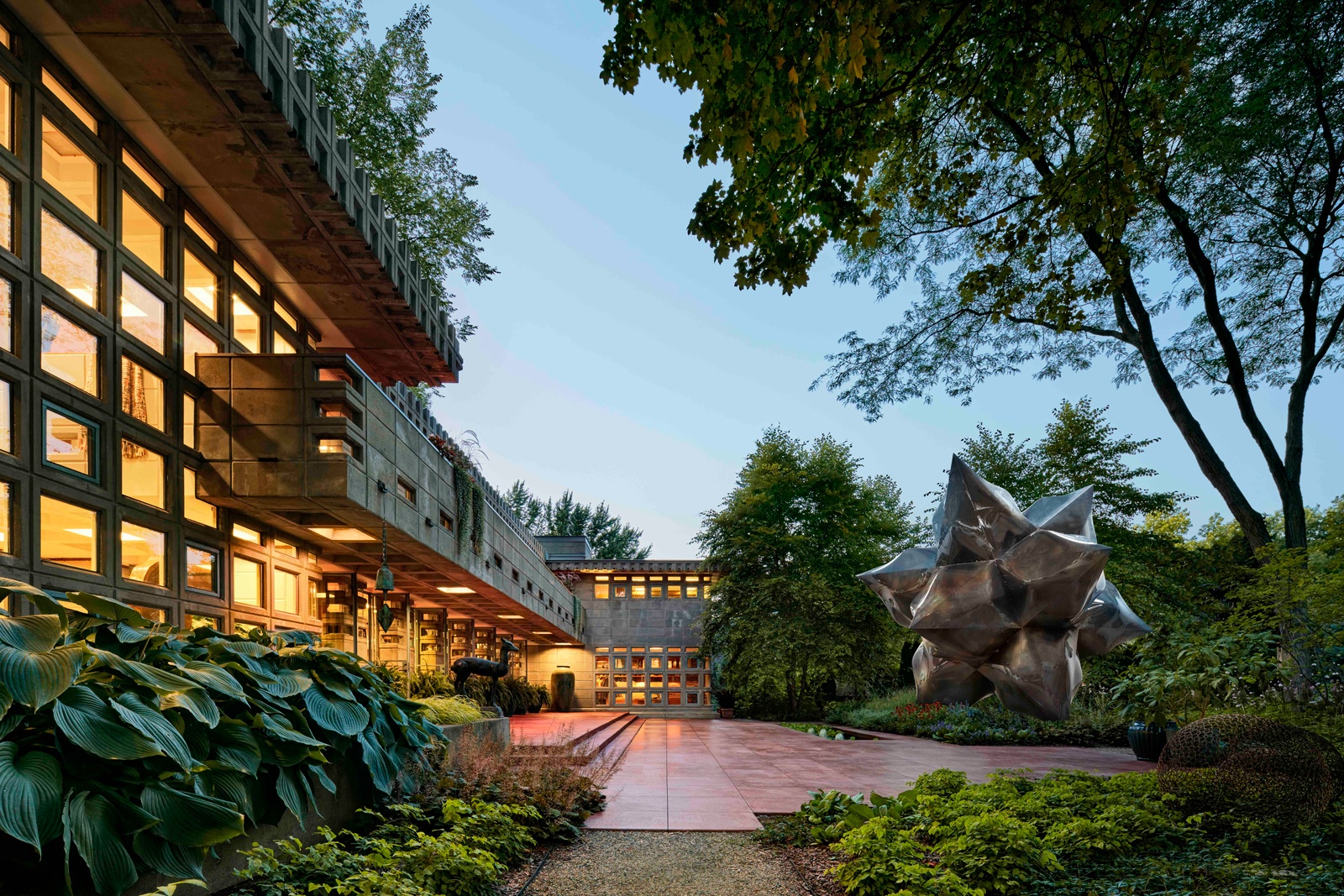 Library Street Collective co-founder Anthony Curis explained to Galerie how they chose the artists: “We have long standing relationships with some of them through our past exhibitions and projects, while others we are new to working with. We thought the space was so incredible and special that it called for artists who we felt might really love the ideas behind SITE, as well as the history and significance of the space.”

How Quarantine Led to an Artistic Breakthrough for Austyn Weiner 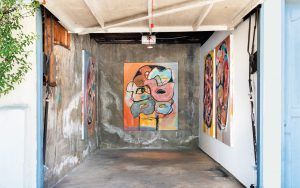 Artist Josh Sperling was thrilled to be included. “Frank Lloyd Wright has always been a hero of mine,” Brooklyn-based Sperling tells Galerie. “His use of geometry continually inspires me. I chose this artwork for this show because of its color, shape and use of pattern.” He added, “I wanted the painting to blend into the architecture much like Wright wanted his buildings to blend into their natural surroundings.”

Similarly, artist Austyn Weiner stated, “My painting The Push And The Pull is a reflection on this past year, and the socio-political state of our country… I specifically wanted to show this painting as it relates to Wright’s journey, and the mode of design he arrived at during the Great Depression. Essentially the style of architecture that Wright built this house from, was directly related to current events of that time, and I feel the same way not only about my painting, but every work in this exhibition.” 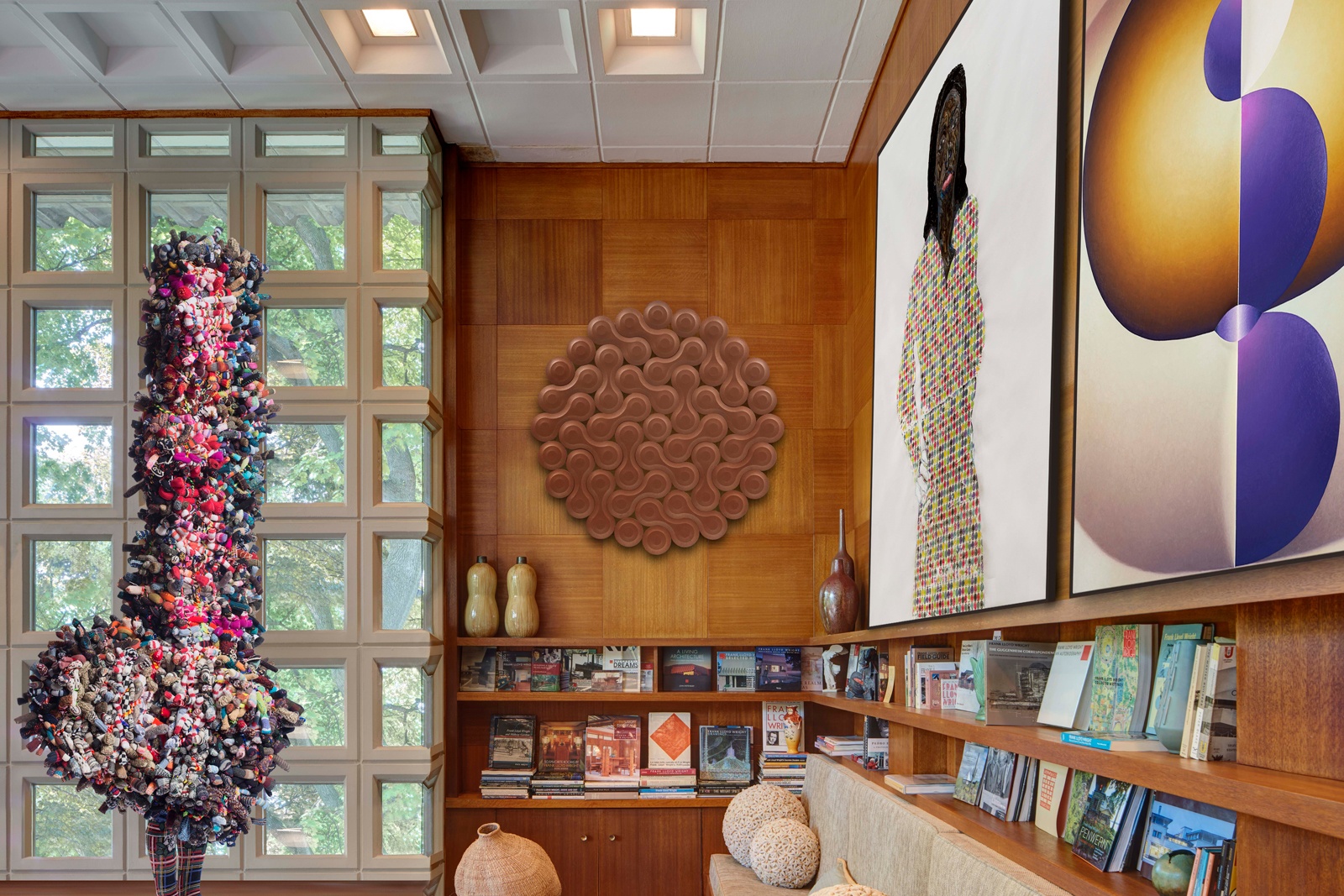 Artist Beverly Fishman admitted virtual shows, “Are both good and bad. They are good, because they expose the work to new audiences, and they allow people to experience art despite not being able to travel. But they have limitations, particularly because my paintings are very experiential. When I make them, I expect my viewers to see them in person, move around them, and experience their shapes and hues in an engaged fashion. Virtual takes that away a bit.” But Fishman believes the exhibition’s modernist setting helps convey some of those experiential qualities.

SITE was not created specifically for the pandemic but was intended as a way to connect the visual arts and the built environment. By being 100 percent virtual, the Library Street Collective removes the constraints of time and place to redefine how people interface with and experience art. 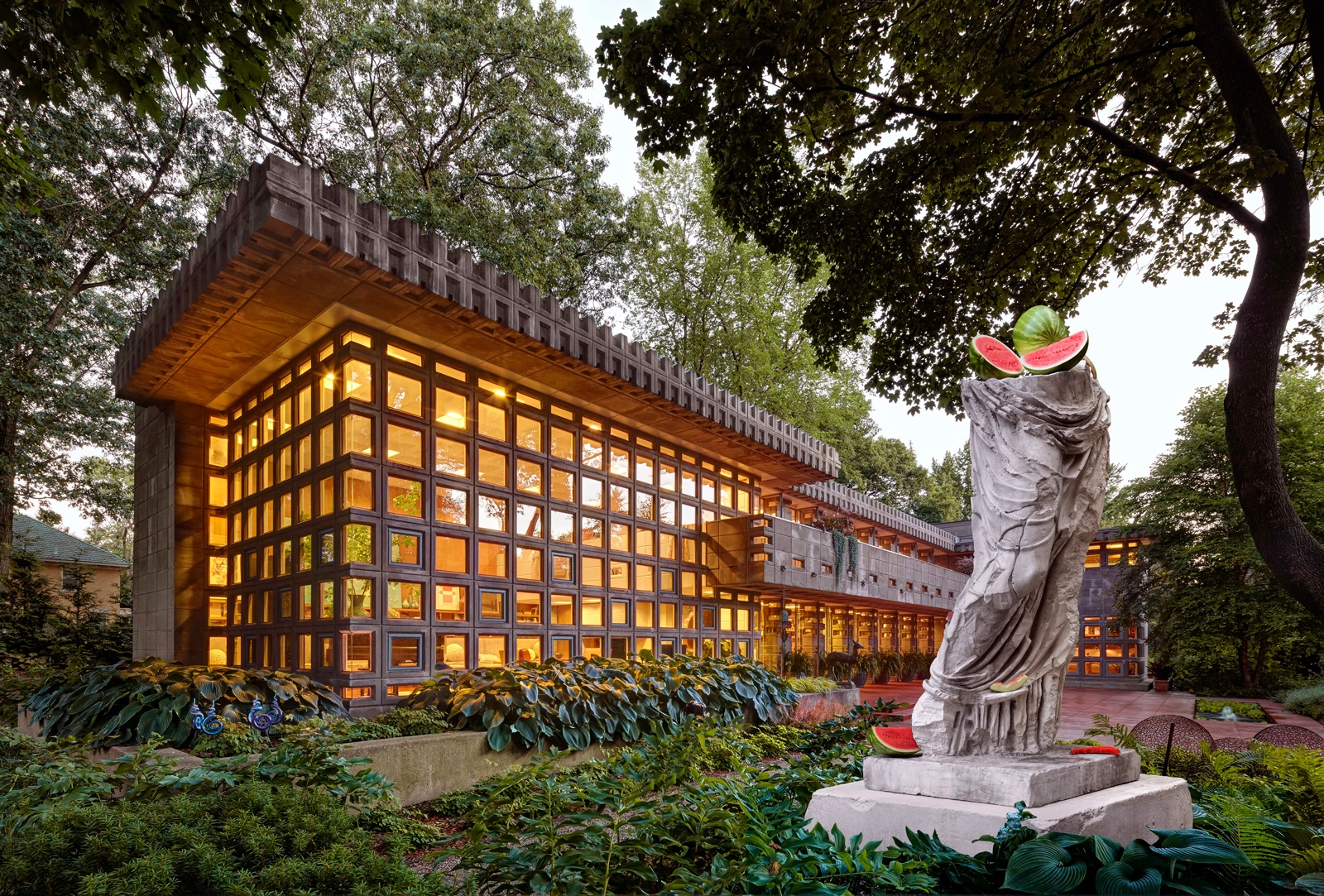 A garden sculpture by Tony Matelli with ripe fruit is included in “SITE 002.” Photo: James Haefner

One additional benefit is being able to see the interior details of spaces that are not easily accessed by the public. Another is that a portion of proceeds from benefit the Freedom House Detroit, a temporary home for indigent survivors of persecution from around the world who are seeking asylum in the United States and Canada. And finally, as Haefner says, “This is a brilliant way to sell art, as you expand your clientele beyond your local borders.”

In the end, the only “site” SITE actually has is a website, but this series tells many stories of past and present… and perhaps the most poignant one might be about a perfect exhibit in the pandemic era.