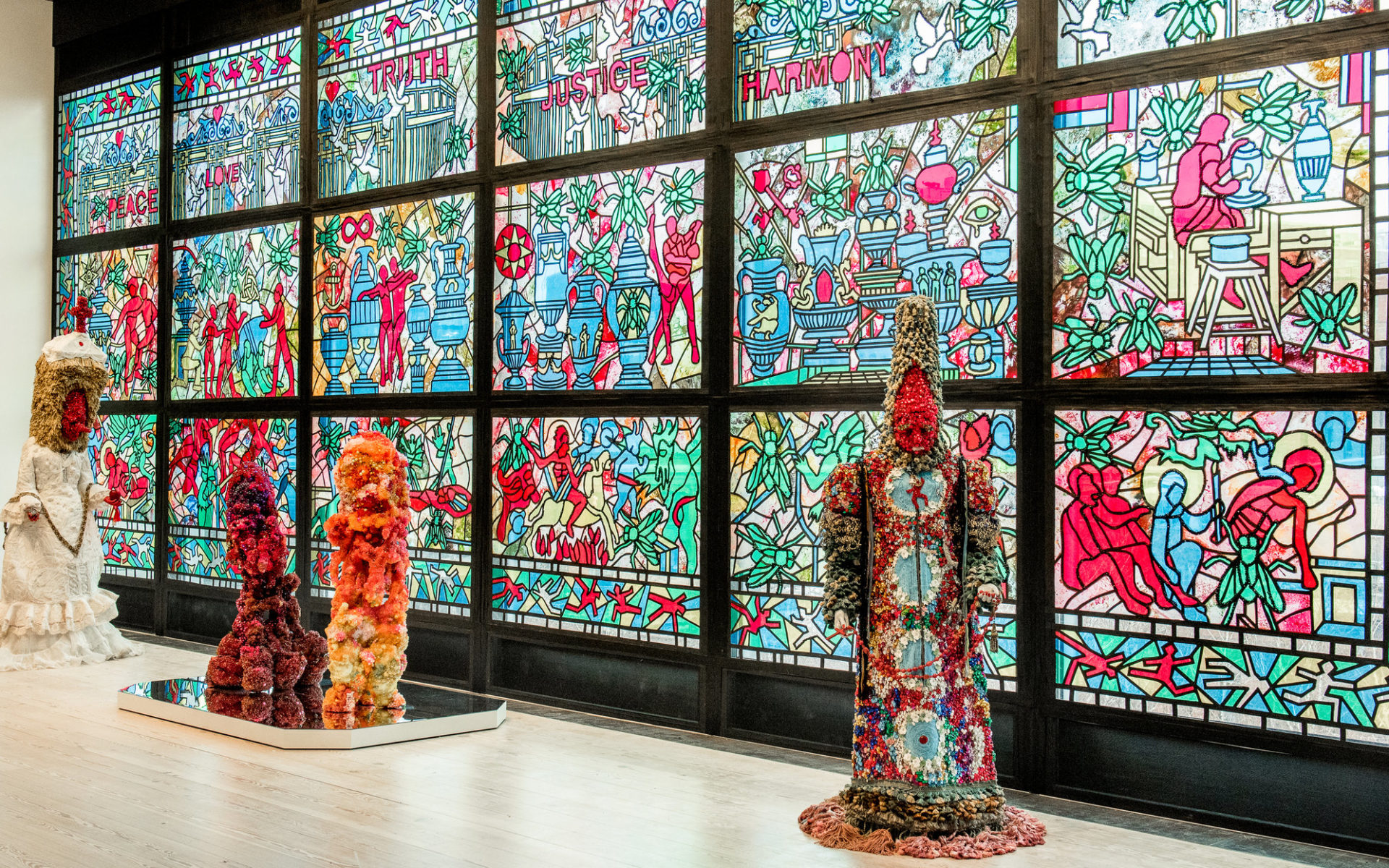 Brooklyn-based artist Raúl de Nieves has transformed a space on the Whitney's fifth floor into a psychedelic stage set. Visually arresting faux “stained-glass” panels made from paper, wood, glue, tape, and acetate sheets line the windows and will be visible from the street at night. The playful sculptures of allegorical opera characters are made up of hundreds of individually placed craft-store beads.
Photo: Courtesy of the Whitney Museum.

First Look at the 2017 Whitney Biennial

The much-anticipated Whitney Biennial, which opened to the public on March 17, is the first edition of the high-profile survey to be staged in the Whitney Museum’s stunning Renzo Piano–designed building on Manhattan’s far West Side, overlooking the Hudson. The 78th edition of the biennial—the longest-running exhibition of contemporary American art—doesn’t have a single theme. However, the two young curators, Christopher Lew and Mia Locks, have taken as their premise a consideration of the individual’s place in a turbulent society. “In the fall of 2015, when we were embarking on this project,” Locks said at a preview of the exhibition, “the world felt like a different place. It became apparent that the idea of humanness or what it means to be in the world right now would be an energizing force for the show. Many of the works pose interesting questions about the forces that bring us together as well as those that bring us apart.”

Whitney Museum director Adam Weinberg commended the duo for bringing a spirited sense of adventure and risk to the exhibition, as well as sensitivity with the artists. He said this year’s biennial feels like “a record of two really smart, open people making their way in this country at this time.”

Locks and Lew spent almost two years traveling across the country, searching for work that best represents America right now. They met with hundreds of artists before settling on a final list of 63 participants—a very manageable number compared with last biennial, held at the museum’s former uptown home in 2014.

One thing that is immediately clear about this biennial in the new museum spaces is how the works have been given room to breathe, many with their own dedicated areas, with some rooms containing just one or two pieces. Also, the curators have made efforts to use the entire museum, placing works in less-expected spaces—from Ajay Kurian’s freakish childlike figures wearing masks and hanging on ropes in a stairwell to a computer-system installation by Aaron Flint Jamison in a conference room.

The lineup includes some big-name artists like William Pope. L, who has created a stinking installation using 2,755 slices of bologna, each one affixed with a photograph of a person that will slowly shrink as the meat cures over the months. Jo Baer is represented by several meditative large-scale paintings that incorporate stonelike forms, while referencing astronomical alignments and ancestor worship. And Larry Bell has contributed a group of his signature minimalist glass boxes, laminated in shades of red and installed on a sixth-floor terrace. But a majority of the artists in the show—the biennial is known for helping to launch any number of careers, from Robert Rauschenberg to Barbara Kruger—are relatively unknown. So it’s a golden opportunity for collectors and curators to make discoveries. Things kick off with a flourish in the lobby, where Chicago artist Cauleen Smith has hung striking, sequined and embroidered banners from the ceiling. Her work hints—in eye-catching fashion—at some of the themes and threads that run through the show. Immigration, racism, gender politics, economic inequality, and connection to place are just a few. Some pieces are confrontational, even painful, tackling challenging issues head on. (Locks urges viewers to “sit a little longer with that discomfort.”) On the other hand, many works have a more escapist quality—dreamlike or nostalgic—encouraging slower modes of engagement and reflection. Shara Hughes’s surreal kaleidoscopic landscapes, for example, recall Matisse and Fauvism. Locks says she and Lew wanted to make room for works that are about “pleasure or even the healing quality of art.” A group of paintings by Shara Hughes. Photo: Lucy Rees.

An exhibition reflecting our current historical moment could have turned into a discordant, grim affair, but the overall mood of this biennial manages to remain, on balance, rather positive, hopeful, sincere. In the end, the survey is a powerful reflection of our complicated times, while confirming the power of art to show possible ways forward.

Click here to see highlights from the 2017 Whitney Biennial

Cover: Brooklyn-based artist Raúl de Nieves has transformed a space on the Whitney's fifth floor into a psychedelic stage set. Visually arresting faux “stained-glass” panels made from paper, wood, glue, tape, and acetate sheets line the windows and will be visible from the street at night. The playful sculptures of allegorical opera characters are made up of hundreds of individually placed craft-store beads.
Photo: Courtesy of the Whitney Museum.
Next Post