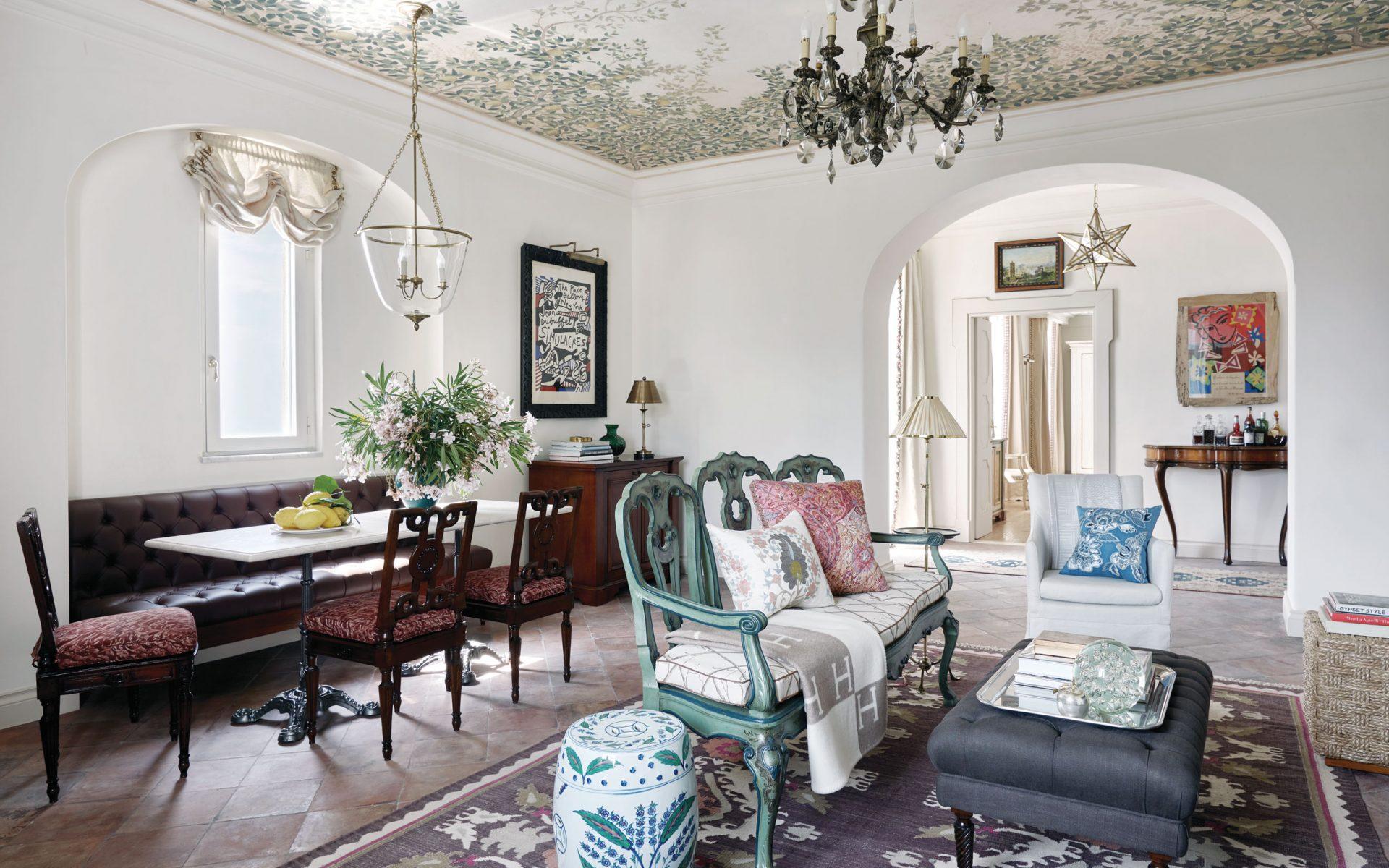 Details in the living room include a hand-painted ceiling and 18th-century Neapolitan chairs.
Photo: Courtesy of Belmond

Set high above the Amalfi Coast in Ravello, where a maze of steps and sidewalks once inspired M.C. Escher, the Belmond Hotel Caruso has long lured savvy travelers up the cliffs to its limestone aerie. From its unmatched perch, the resort offers guests spectacular views of the boats gliding across the sea from the moment the sun crests the cliffs. With the addition of Villa Margherita, the Belmond now includes a secluded sanctuary steps away from the hotel, but with all the same benefits as the main property. A collector’s dream, the two-story private villa is filled with special pieces curated by Milan-based designer Eric Egan, who had been acquiring objets for decades with his own fantasy Italian country house in mind. Realizing that such a home wasn’t on the horizon, he raided his personal trove to create rooms that speak to a life well traveled. “I had been warehousing these treasures I found at auctions,” he says of the cache of classic Italian works as well as French and English antiques. “It’s a mix of high and low, antique and modern.” A detail of the living room on the upper level of the villa. Photo: Courtesy of Belmond

In the villa, 18th-century Neapolitan chairs upholstered in vintage Fortuny fabrics mingle with 17th-century gilt-wood Spanish mirrors beneath ceilings hand-painted with themes of the region. On the walls, artwork is just as varied and intriguing—a serigraph by Henri Matisse, framed in wood salvaged from the pilings of canals in Venice, and a Jean Dubuffet print from the 1970s are displayed alongside architectural fragments unearthed on the site of the hotel, which was originally an 11th-century palace. Dinner is served on the villa’s rooftop terrace. Photo: Courtesy of Belmond

The unparalleled attention to detail extends beyond the interiors. The villa includes private gardens, designed by a fourth-generation local gardener, and a roof top terrace for impeccable alfresco meals prepared and served by the suite’s personal chef and butler. It’s hard to imagine a more ideal setting for a seemingly simple pasta pomodoro with a tomato sauce freshly made from four different local varietals, which proves once again, it’s all about the mix. Outdoor dining in the private gardens. Photo: Courtesy of Belmond

A version of this article first appeared in print in our 2019 Winter issue under the headline “Castle in the Air.” Subscribe to the magazine.

Cover: Details in the living room include a hand-painted ceiling and 18th-century Neapolitan chairs.
Photo: Courtesy of Belmond
Next Post