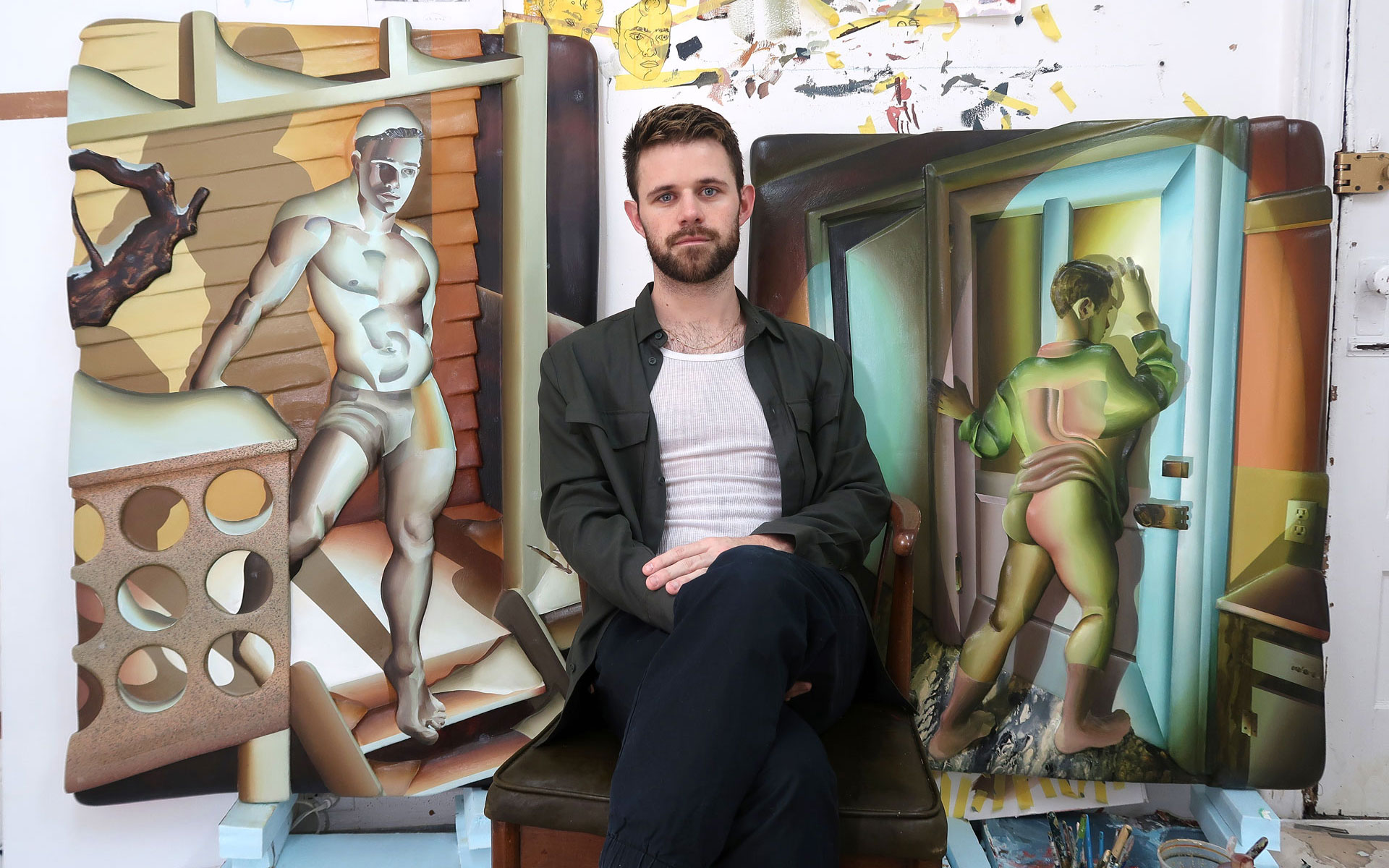 Kyle Dunn in his studio.
Photo: Courtesy of the artist

Emerging Artist Kyle Dunn Is Causing a Stir with His Sensuous, Sculptural Paintings

After a successful solo exhibition at PPOW gallery, the Brooklyn-based artist is gearing up for an exhibition at Galerie Maria Bernheim in Zurich this summer 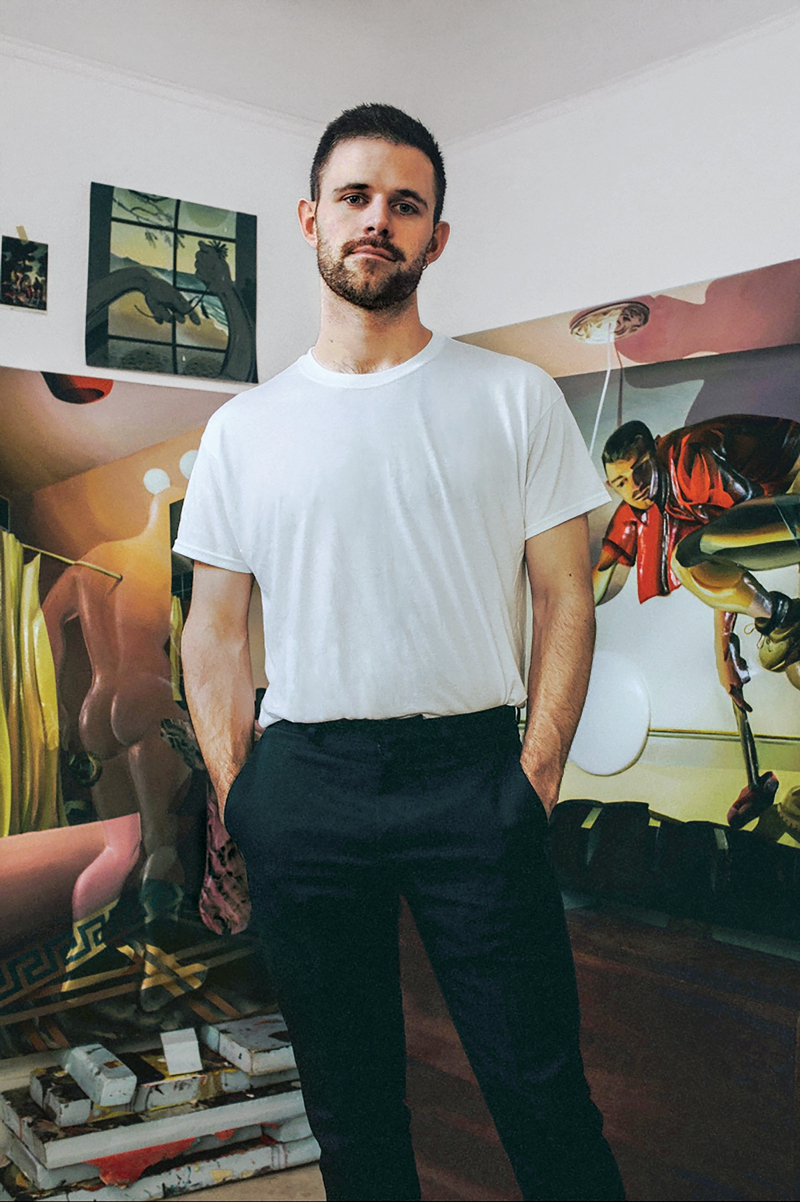 While Kyle Dunn may be most celebrated for his paintings, he began his unique practice by way of sculpture at the Maryland Institute College of Art. “Applying relief foam to surfaces needed some figuring out, but around 2016 my ideas started to click,” he says of the visual language he formed by building three-dimensional elements on resin or wooden panel.

Amid the current boom of queer figurative painting, Dunn still looks to his sculptural roots for inspiration. In his solo exhibition “Into Open Air,” at P.P.O.W gallery in New York last fall, he paid homage to architectural grandiosity and the expressive determination of Soviet-era forms. False Start, for example, showed a monumental man in his briefs surrounded by graceful drifts of snow, leaning on his porch with the elegance of a Roman statue while braving the cold. 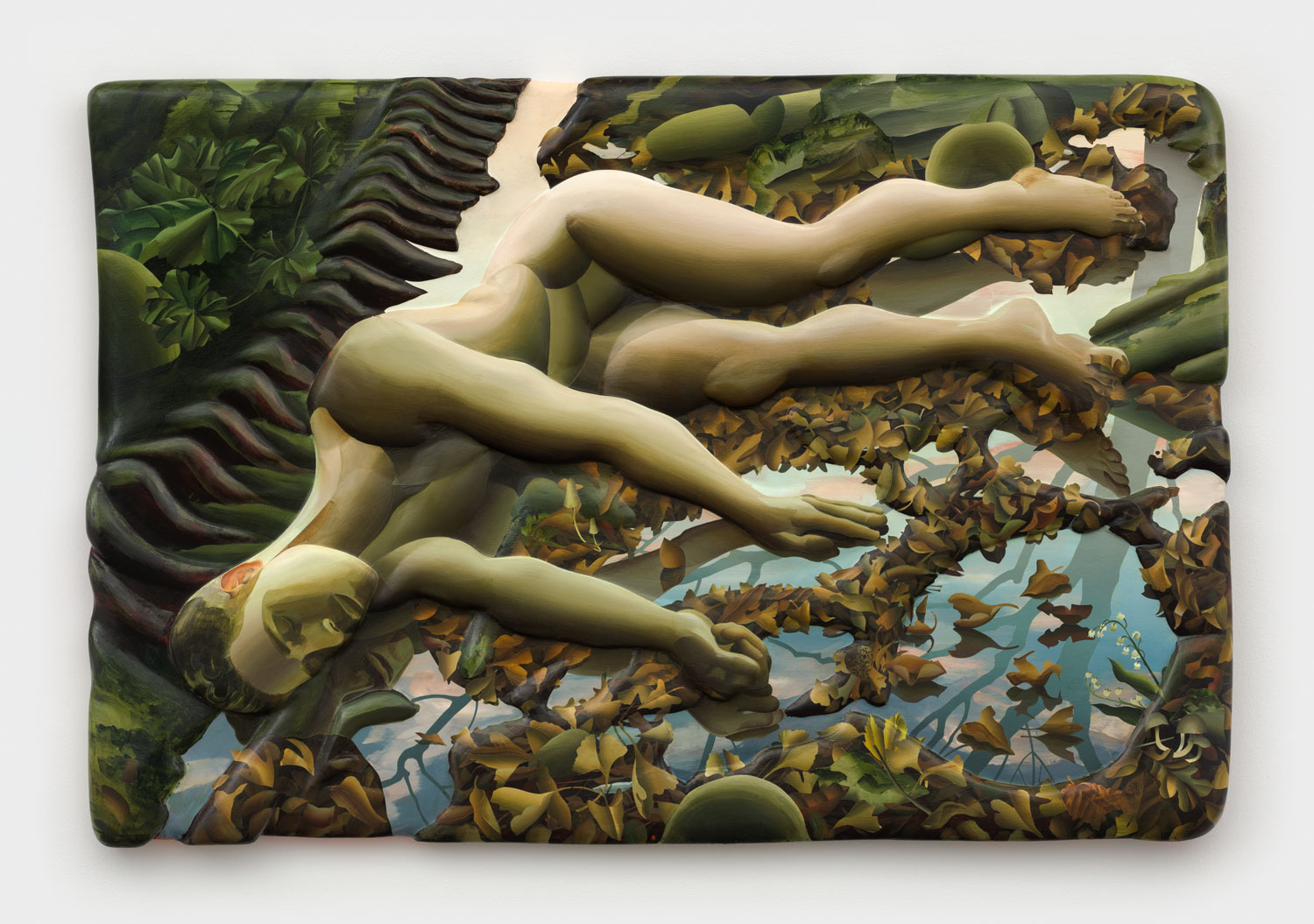 Contemporary culture also serves as a point of reference for Dunn, who combs through online images and Instagram photos for different poses and gestures. His upcoming summer solo show at Galerie Maria Bernheim in Zurich will feature an array of visual cues, including some drawn from live models. He believes his painting stems from both his outlook of the world and observations of a digital culture. “I am informed by my own emotions in the process,” he says, “but I don’t let my physical or inner likeness cloud the work.” 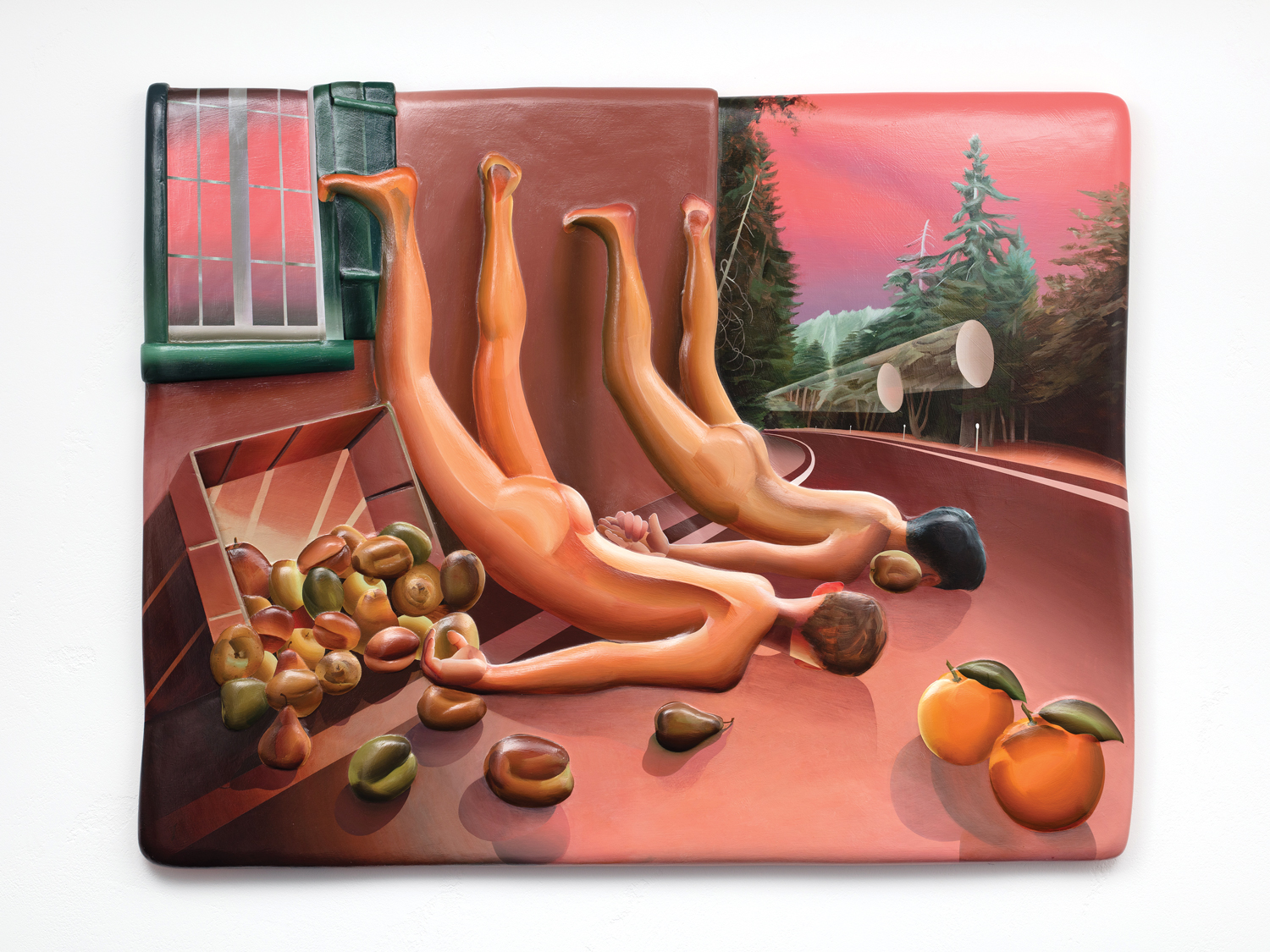 His new paintings combine “a balance of stylizing and simplifying” with “looser finishes and less academic renditions.” In Pact, for instance, the painter orchestrates a humorously melodramatic mise-en-scène in which two poetically contorted lovers prepare for their demise, surrounded by lush fruits and a fiery-pink sky. Two light beams approach though a winding path and loom large above their heads, conjuring the illusion of halos. “I’ve always had basement studios and often miss those spectacular magenta-and-tangerine sunsets,” says Dunn from his Brooklyn work space, “but I come across them on social media.” 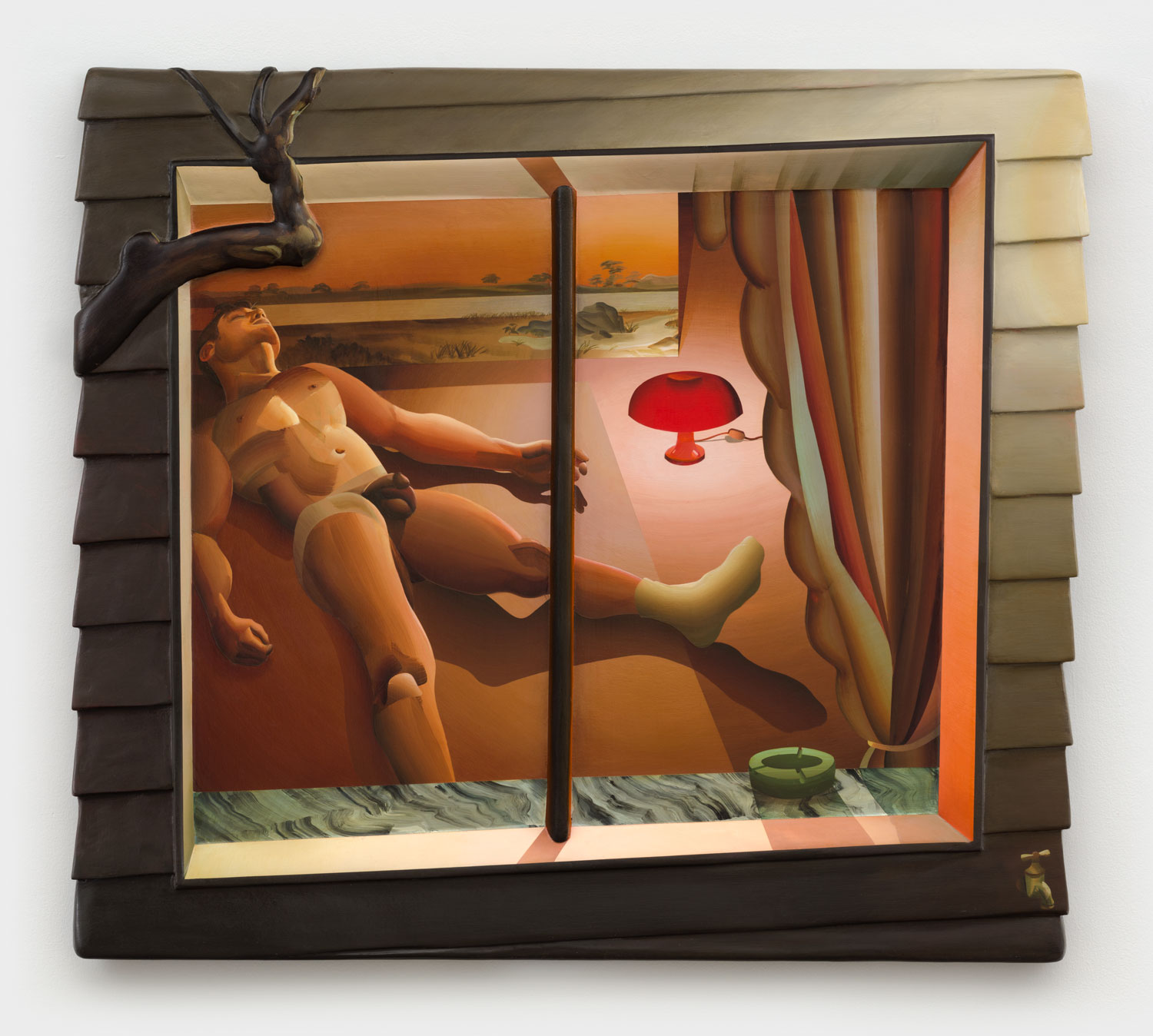 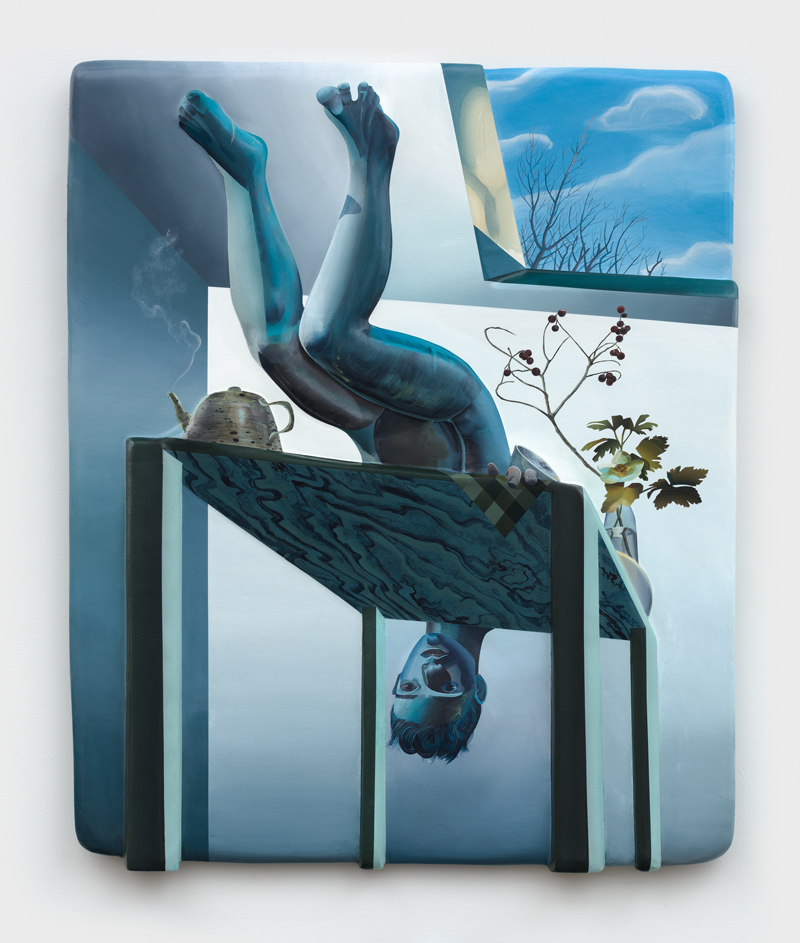 Salman Toor’s Cinematic Canvases Are a Celebration of Queer Culture 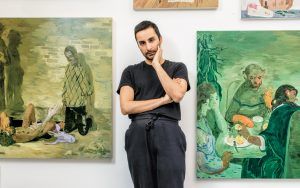 Cover: Kyle Dunn in his studio.
Photo: Courtesy of the artist
Next Post