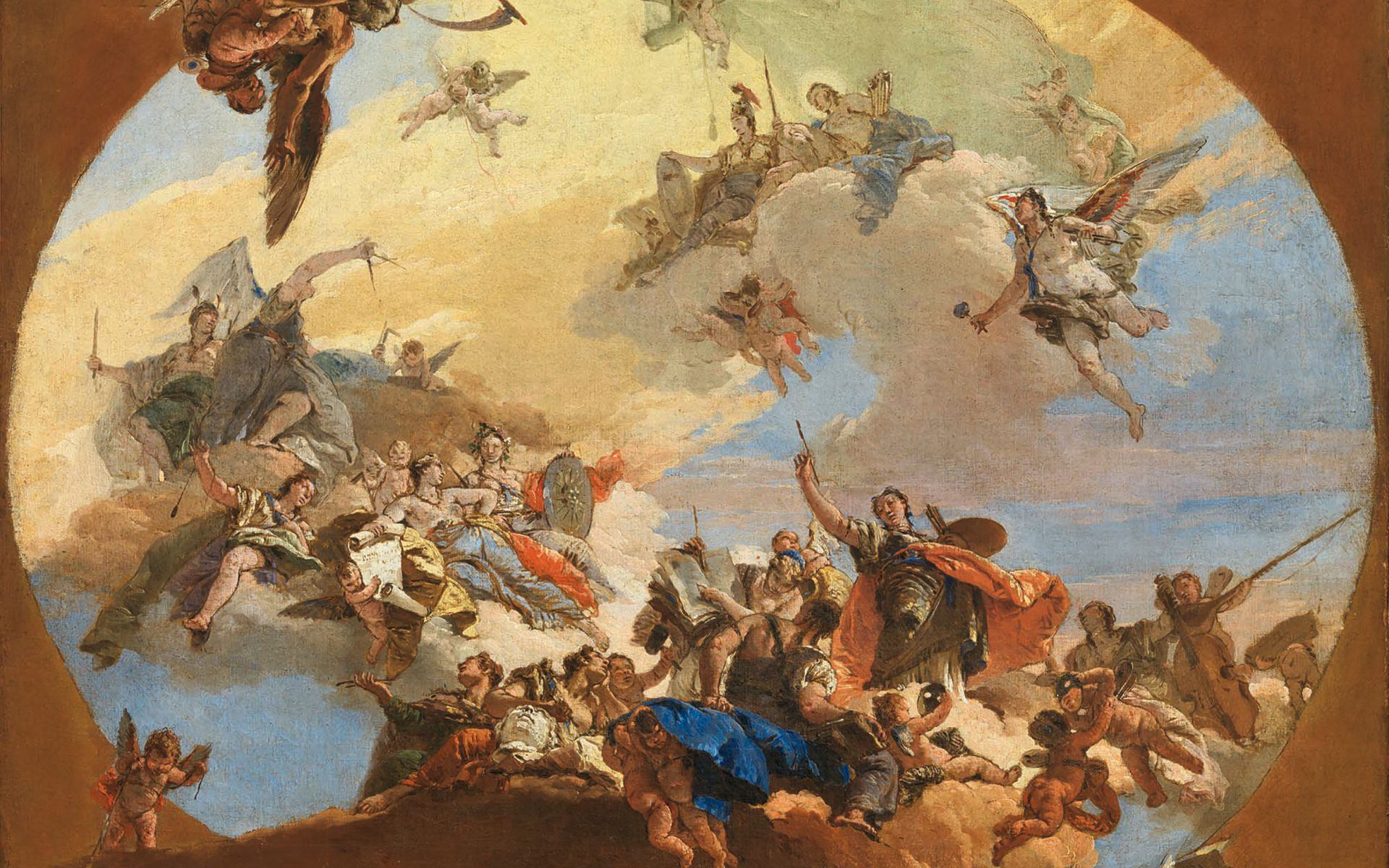 Giambattista Tiepolo, *Triumph of the Arts and Sciences*, circa 1730–31. The work will be on view at the Frick Collection's exhibition honoring the lost frescoes of Tiepolo in Milan.
Photo: Luisa Oliveira

Here are Galerie’s picks of the must-see art and design events in New York this week, from the unveiling of Alicja Kwade’s rooftop installation at the Metropolitan Museum of Art to the Brooklyn Museum’s annual gala. An astounding array of jewels hit the block at Christie’s this week, with a focus on signed pieces by Bulgari, Cartier, Harry Winston, Tiffany & Co., and Van Cleef & Arpels, and a handful of spectacular colorless and colored gems. Estimates for the 285 lots range from $10,000 to $6 million. Calling planetary orbits to mind, two monumental steel-and-stone sculptures by Alicja Kwade will crown The Met rooftop for the annual summer rooftop commission. The work, titled Parapivot, was especially conceived for the space by Polish-born, Berlin-based artist, who is known for her experiential works that explore concepts of science, philosophy, and perception. Don’t miss the exhibition at 303 gallery in the Lower East Side titled “ParaParticular.” Recent iterations of The Met rooftop include installations by Cornelia Parker and Huma Bhabha.

Where: The Metropolitan Museum of Art, 1000 Fifth Avenue 3. Tiepolo in Milan: The Lost Frescoes of Palazzo Archinto
The Frick Collection

A new exhibition pays homage to the Giambattista Tiepolo’s frescoes on the ceiling of Milan’s Palazzo Archinto. Painted around 1730, the masterworks existed for just two centuries before bombers completely destroyed them during World War II. The Frick show unites, for the first time ever, five of Tiepolo’s preparatory paintings along with 50 objects relating to the frescoes’ creation.

When: Opens Tuesday, April 16; on view through July 14

The museum’s eighth annual Artist Ball and After Party will honor artist Nick Cave and Bank of America. Dinner will feature special artist activations and multisensory installations inspired by Frida Kahlo, and the After Party will feature live sets by DJ Joe Usher, DJ Runna, Riobamba, and Swizz Beatz. Expect a silent auction featuring lots like a shopping spree at Lafayette 148 and a box suite to Ariana Grande’s upcoming concert at Madison Square Garden; appearances by artists like KAWS, JR, and Mickalene Thomas; and a silkscreen printing station by Breezer, where guests can create their own tote bags.

Where: The Brooklyn Museum, 200 Eastern Parkway When: Opens Wednesday, April 17; on view through August 11

The gallery inaugurates its new Tribeca space—nearly the double the size of its Lower East Side location—with the first U.S. exhibition of floral photographs by New Zealand photographer Ann Shelton. She arranges her botanical compositions by employing the Japanese tradition of Ikebana (“making flowers alive”), which calls for plant specimens that women have historically used to control their fertility. The reception will feature a live performance that explores the same themes as “Jane Says” titled The Physical Garden.

Cover: Giambattista Tiepolo, *Triumph of the Arts and Sciences*, circa 1730–31. The work will be on view at the Frick Collection's exhibition honoring the lost frescoes of Tiepolo in Milan.
Photo: Luisa Oliveira
Next Post