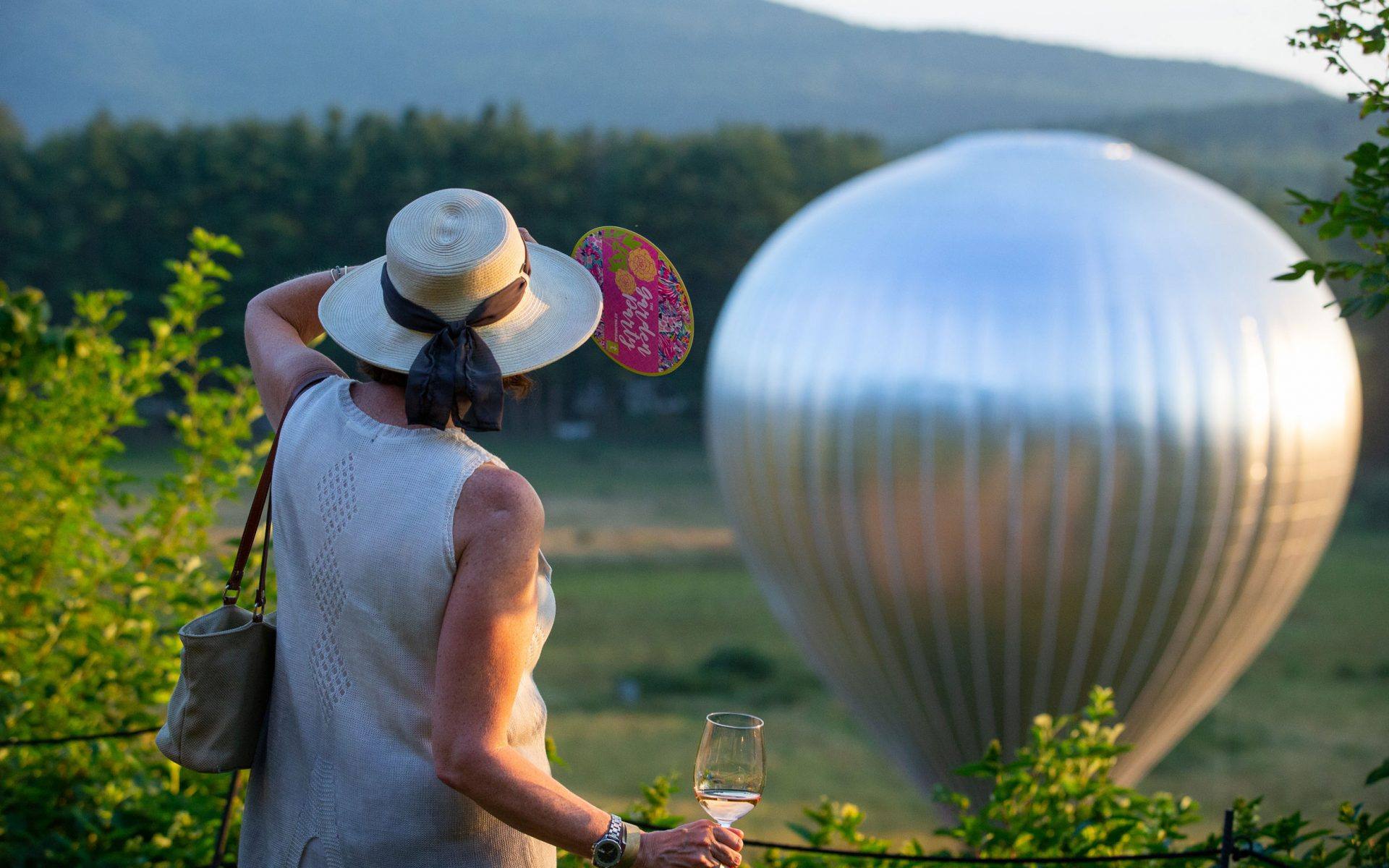 Those traveling from Martha’s Vineyard through greater Boston toward the Berkshires over the past two weeks might have noticed an usual metallic orb in the sky roving across the mesmerizing Massachusetts landscape, dotted with modest lakes and ample mountains. This otherworldly spherical vision was not a sign of alien invasion but the latest project of Doug Aitken.

Centered around a 100-foot mylar hot-air balloon, the project, called New Horizon, comprises a series of live events that were held across the state of Massachusetts throughout the month of July. The balloon made various flights throughout that period, concluding its journey across the New England state this past Sunday with The Trustees’s annual Garden Party at the storied Naumkeag estate in Stockbridge. Overlooking a fascinating 46-acre vista, the Gilded Age mansion hosted the balloon, which was stationed by its Fletcher Steele–designed gardens.

The ambitious project was organized by The Trustees, the world’s first regional land trust, which is committed to the protection and preservation of historic and natural sites across Massachusetts and bringing together different communities around art, culture, and public programming. The Trustees have been behind similar outdoor installations with artists such as Alicja Kwade and Jeppe Hein. Aitken is widely known for his arresting installations that serve as catalysts for gatherings, concerts, and discussions against the backdrop of mesmerizing visuals, such as his mirrored house sculpture Mirage, with iterations thus far installed in the Southern California desert for Desert X, Switzerland’s snow-covered resort town Gstaad, and Detroit’s historic State Savings Bank.

This summer, New Horizon initiated a breathtaking dialogue with nature, reflecting its constantly changing surroundings on its mirror-like surface. In addition to a series of flights at various destinations, the flying sculpture hosted a range of concerts and panels throughout its run, including musical performances by Kelsey Lu, Jónsi, Destroyer, and Lonnie Holley. Among the  panelists who gathered around the balloon to discuss issues of climate, earth, and architecture were artist Sarah Morris and economic systems expert Spencer Glendon. The Trustees summer Garden Party saw attendees, including board members, locals committed to supporting the organization’s mission, and a select art-world crowd, present to toast the event’s honorary guest, Aitken. The evening reached its climax after the sunset, when the band Bang on a Can performed in response to the balloon’s rhythmic light installation that lined its voluptuous body with rays of light, dancing to the band’s music in the pitch dark.

“We’ve been thinking about how art can reflect its sight,” Jocelyn Forbush, The Trustees’s chief of operations and programs, tells Galerie. “Every happening around the balloon had a different personality reflecting—literally—differently on the place. Our previous projects have been sight-specific, but we’re excited to bring the art to the community this time.”

See photos from The Trustees’s annual Garden Party below. Hans Morris (chairman of the board of New England Newspapers) gives welcome remarks. Photo: Matthew Healey. Courtesy of The Trustees