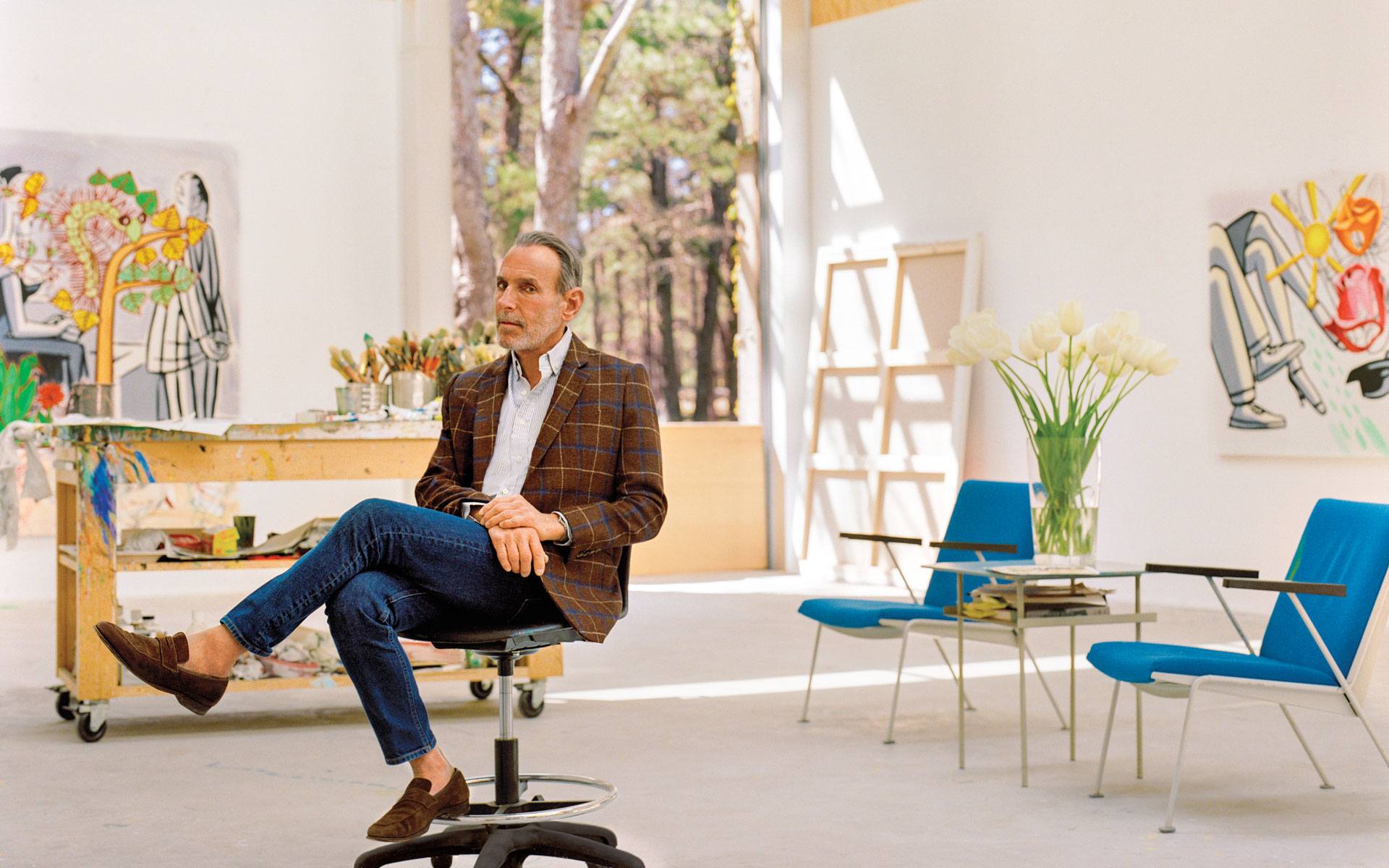 Seated in his studio in East Hampton, David Salle is flanked by a painting in progress (at right) and the recently completed *Tree of Life (Faces)*.
Photo: François Dischinger

Ahead of his show at the Brant Foundation, the revered mix master reflects on 40 years of painting ever-evolving, always-arresting visual mash-ups

Why does one arrangement of color and form galvanize our attention and serve up a thrill, while another, seemingly similar composition falls flat?

At 67, painter David Salle is in a position to provide some answers. An upcoming survey at the Brant Foundation in Connecticut (rescheduled for the because of the COVID-19 pandemic) covers the full sweep of his career and offers a prime opportunity to reassess his place as one of the most-admired painters of the past half century. 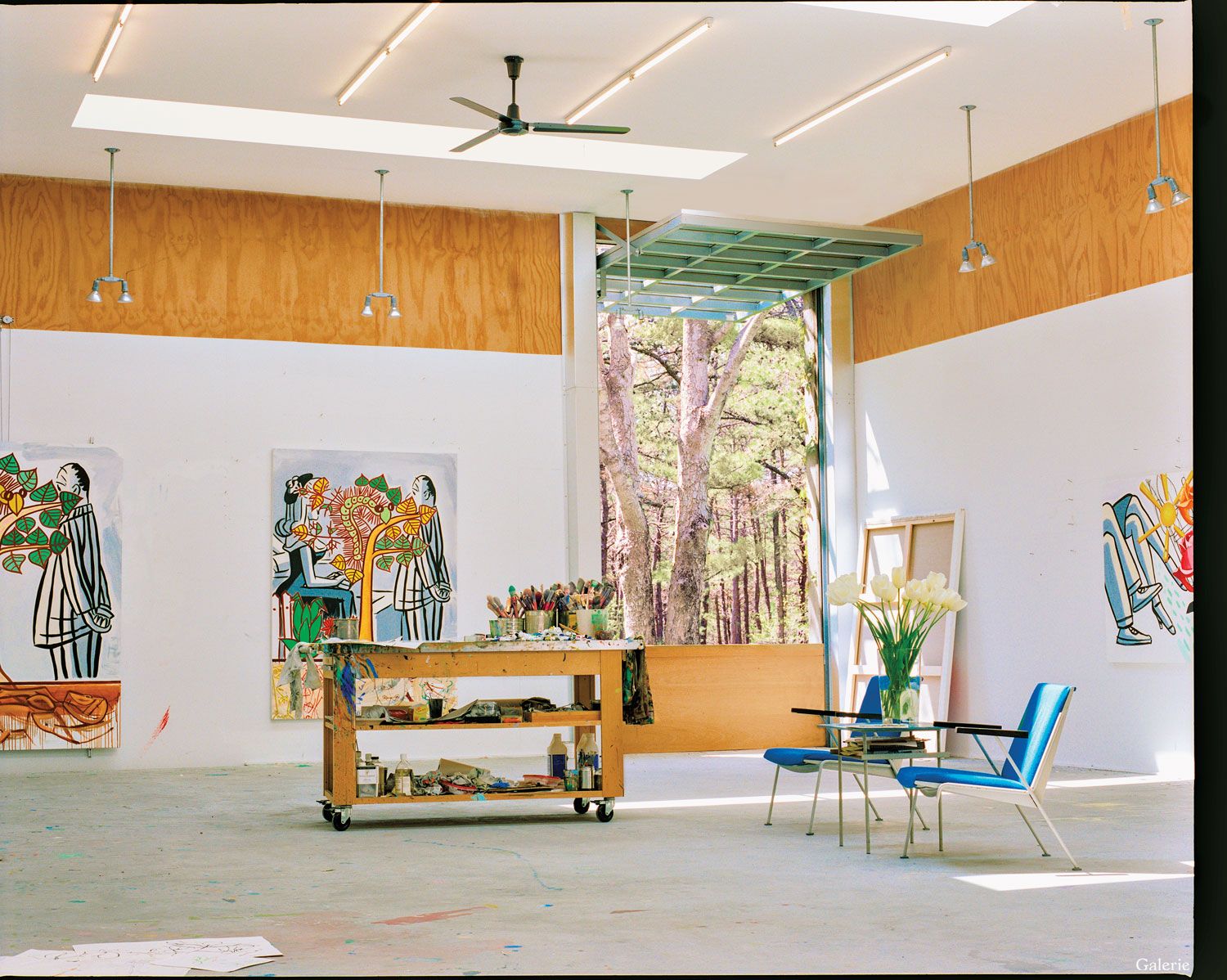 Notably, Salle is also one of the best art writers around—especially in terms of appreciating other painters—as his 2016 book, How to See, demonstrated. Very few people can do a thing and write about that thing as articulately as he can.

So when Salle ushers me into his Brooklyn studio on a warm spring day, I’m keenly alert to his commentary on everything related to art, starting with the trio of works in progress before us. All three paintings reflect his signature collagelike approach, combining sometimes discordant imagery in fascinatingly ambiguous ways, tightly packed but never too busy, rhythmically resounding in symphonic fashion, suggestive but never obvious. 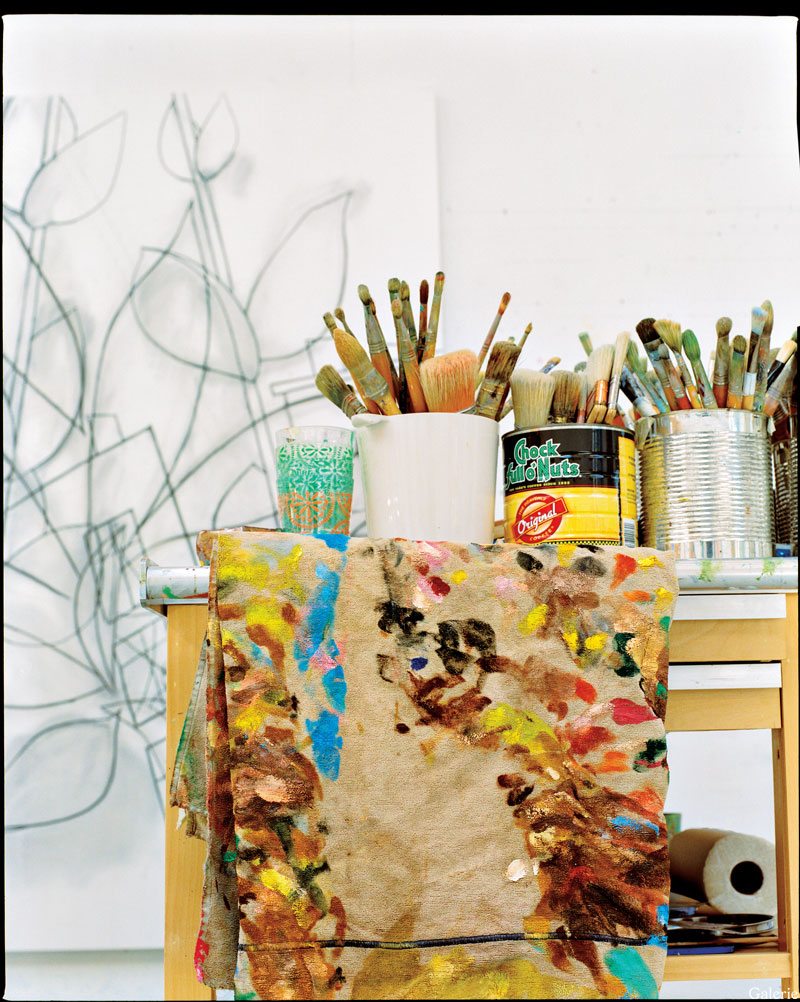 A work in its early stages hangs behind a table with brushes. Photo: François Dischinger 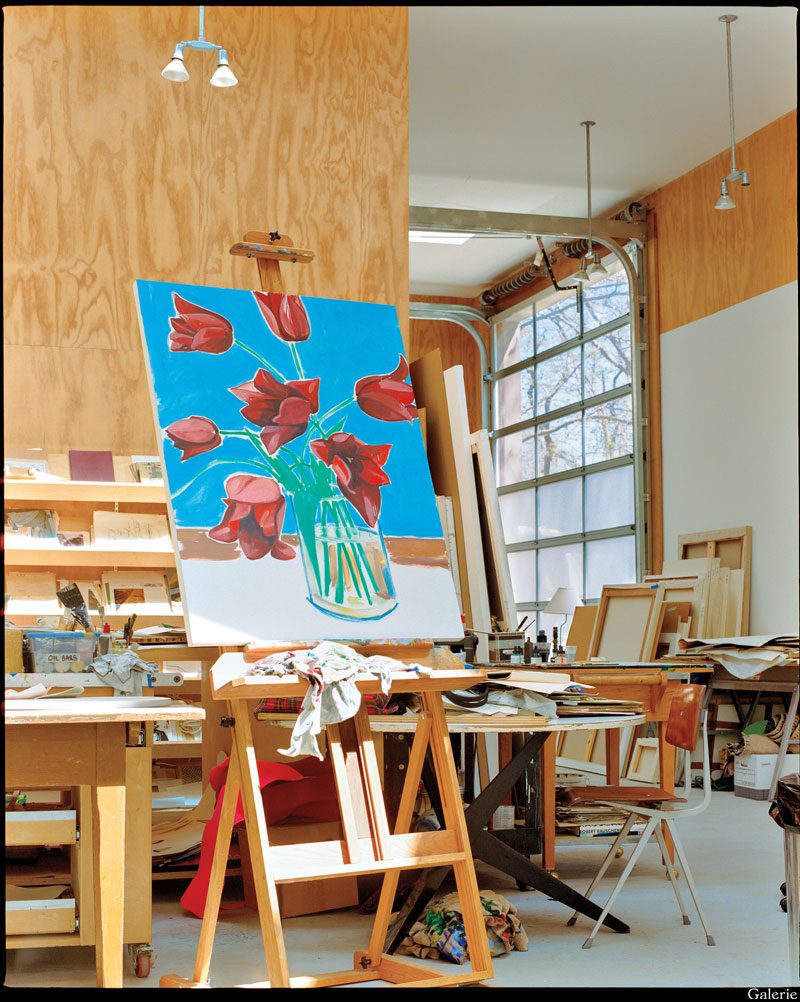 One painting has among its elements a receding stack of bright red cigarette boxes, a glove, a house, a plantlike form, a 1950s-looking male clad in pajamas, and a naked woman—a recurring presence in Salle’s oeuvre. But as I try to parse out the meaning (is he looking at her?), the artist waves me off. “A list of images does not a painting make,” says Salle, who casts a slim, elegant, and composed figure himself. “The imagery is constantly changing, it’s evolving, it circulates. The images are chosen in a purely instinctive, intuitive way. It’s the organization of those things that is the art.”

“My work, stylistically, has probably changed more than anyone else’s in my generation”

Salle, who splits his time between Brooklyn and East Hampton, where he has a home and studio, doesn’t begin by sketching smaller versions of his paintings but instead digs right in. “I start with one image,” he says. “In this one I asked, ‘What would happen if a bunch of cigarette packs weren’t cigarette packs but became a kind of architectural structure like a ziggurat?’ It’s literally a building block for this painting. The other stuff comes out of a feeling of spatial engagement, something theatrical and dramatic. And I’m simply casting the parts of that drama with images.” He adds that the viewer then has “the fun of fitting the parts of the story together.”

An Oklahoma native who grew up in Kansas, Salle went to CalArts to study with the late great John Baldessari when he was 17. He moved to New York in 1976 and his work quickly gained traction, becoming associated with the so-called Pictures Generation (Cindy Sherman, Richard Prince, Barbara Kruger), thanks to his often-ironic use of found images. He certainly had good taste in dealers along the way, having worked with legends like Leo Castelli, Bruno Bischofberger, Larry Gagosian, Mary Boone, and Jeffrey Deitch; he now shows with Per Skarstedt.

The Brant exhibition features some 50 works and is Salle’s first big survey in 20 years. The artist, who famously had a solo show at the Whitney Museum when he was just 34, says he is looking forward to the exhibition as a way “to see what has stayed the same, what’s changed.” 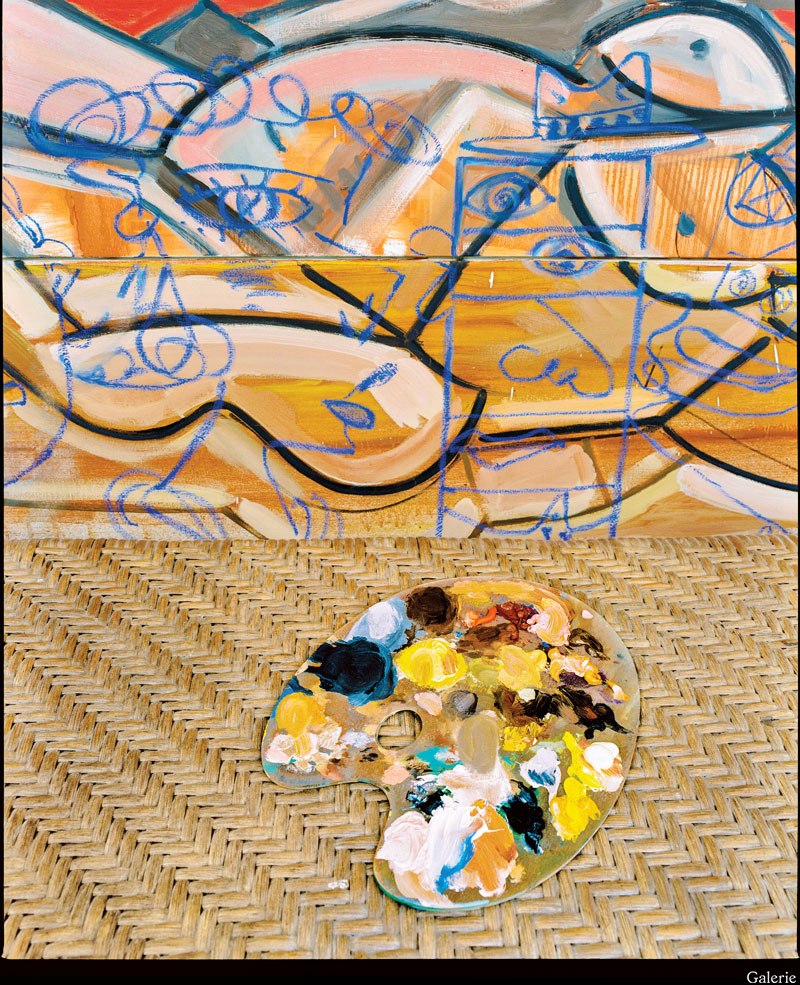 A paint palette rests on a chaise next to a work titled Under the Earth. Photo: François Dischinger

In his view, the constant in his work has been “compositional complexity and sophistication—or let’s just say emphasis.” And as for what’s changed, “I see my drawing coming out more and more,” he says. As he thinks about it, he adds, “My work, stylistically, has probably changed more than anyone else’s in my generation.”

The show is also an opportunity to introduce Salle’s work to younger viewers. “People get used to seeing things in reproduction,” he says. “Some have a mistaken idea that seeing it online is seeing it, and it’s not.” 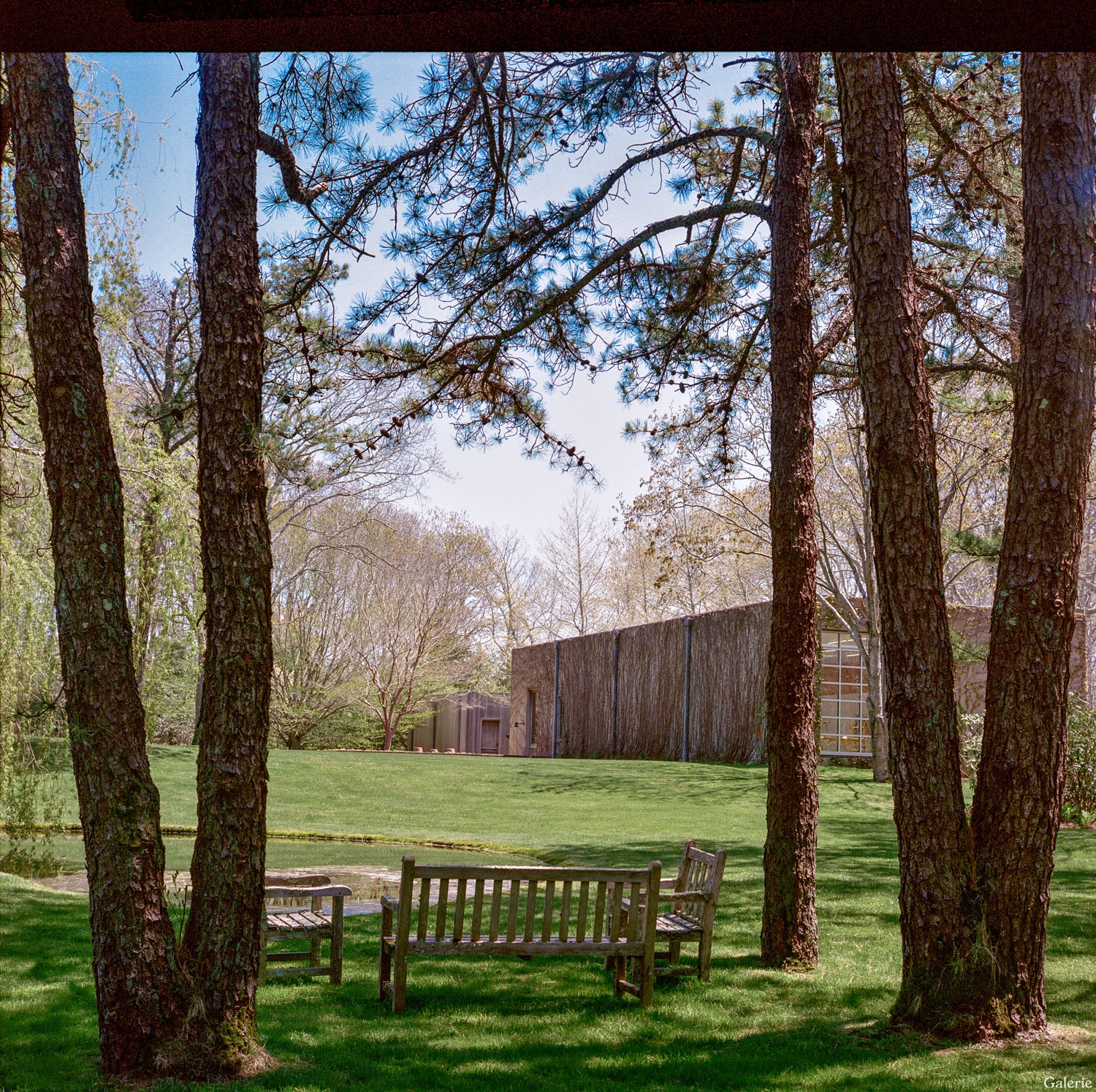 Eight of the works are from the collection of Brant Foundation creator Peter Brant—he’s a longtime fan of the artist—while the rest are on loan. Some haven’t been seen by Salle in years, including Old Bottles, a 1996 diptych featuring bits of decorative patterning, butterflies, glassware, and bottles surreally collaged with images of women, including two who are strolling, hands behind their backs, through a colonnade. The painting, which sold for almost $500,000 at Christie’s London two years ago, seems to hint at some intriguing but ultimately elusive narrative. Salle is alert to wordplay, and of course the saying about old wine in new bottles comes to mind. “A nice metaphor,” he says, laughing. 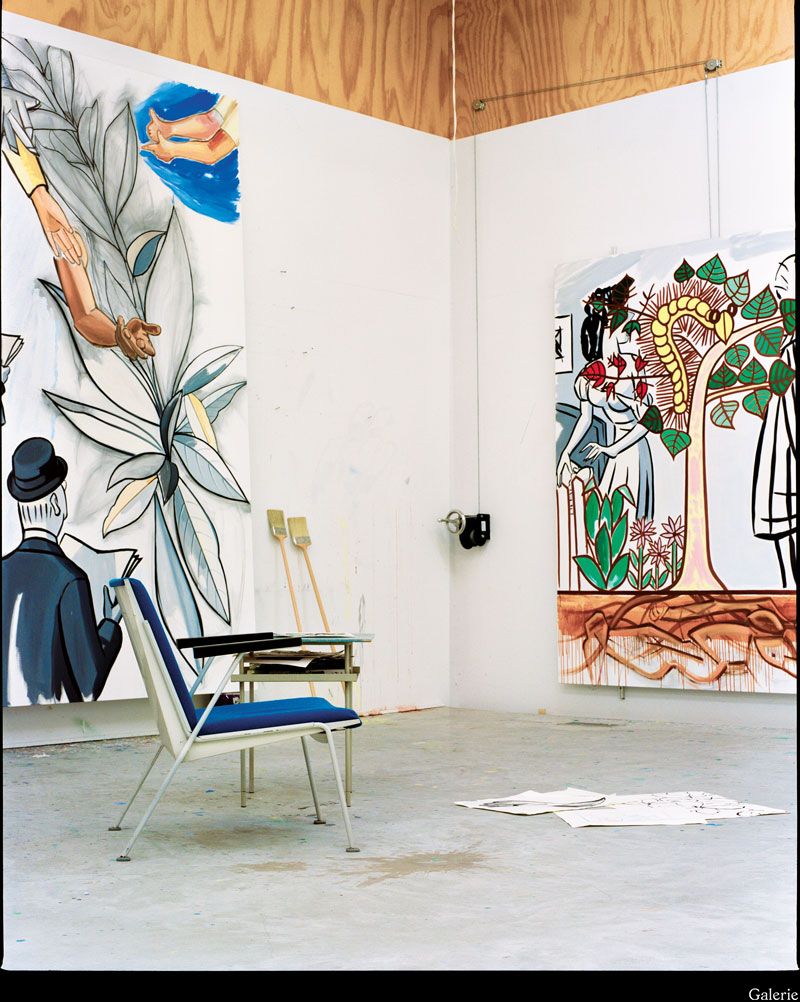 As with his complex compositions, there isn’t one easy story line for the Brant exhibition in terms of his career. It’s not a comeback, since he never went away. It’s not a victory lap, exactly, and it sure isn’t a swan song, given his creative vitality and steady production. Truth is, even Salle’s not sure how it’s going to go over. And that, the artist says, “is the fun part.”

A version of this article first appeared in print in our 2020 Summer Issue under the headline “Elements of Style.” Subscribe to the magazine.

Cover: Seated in his studio in East Hampton, David Salle is flanked by a painting in progress (at right) and the recently completed *Tree of Life (Faces)*.
Photo: François Dischinger
Next Post