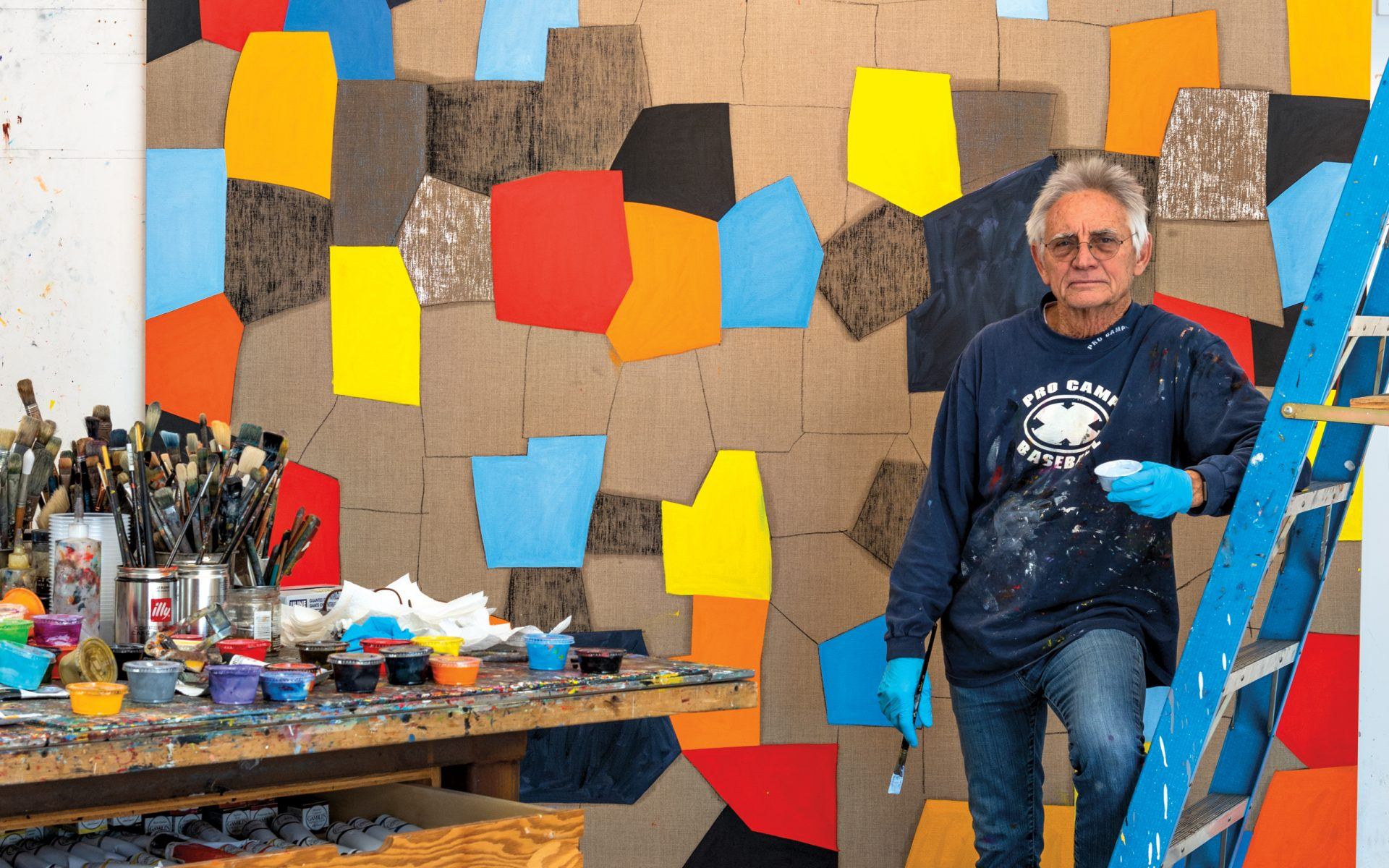 The artist at work on a recent painting in his Venice studio.
Photo: Firooz Zahedi

As a kid growing up in Dayton, Ohio, Charles Arnoldi was a hard-partying, street-brawling, drag-racing “hood,” he says. “I had a slicked-back haircut, pegged pants, and pointed-toe boots for fighting. In Dayton, they just pushed you through high school, and my buddies and I didn’t care. All we wanted was to get through school to go work at a factory, because if you did the graveyard shift you got paid double time.” A 60-foot skylight illuminates a selection of Arnoldi’s paintings in the main gallery of his Venice studio. Photo: Firooz Zahedi

But a trip as a teenager to visit his father in Thousand Oaks, California, made a big impression, and after graduation in the mid-’60s, he and some pals pooled their money and stole enough parts for his 1955 Chevy to get themselves out west. Though he had no intention of becoming an artist, Arnoldi adopted a hippie lifestyle, finding work painting houses and digging trenches, and eventually starting a Lucite frame company with artist Laddie John Dill. Arnoldi also took classes at the Chouinard Art Institute (now CalArts) in L.A.’s Westlake neighborhood, though he dropped out after winning the Los Angeles County Museum of Art’s Young Talent Award in 1969 for his labor-intensive abstract paintings—a language he has continued to explore over the ensuing half-century, becoming a stalwart of the L.A. art scene.

[See more photos of this home by Charle Arnoldi]

These days, Arnoldi, now sporting a few more lines on his tanned visage and a shock of white hair, still exudes an intrepid, industrious spirit. He cuts an athletic figure in his studio uniform of a white T-shirt, jeans, and black sneakers as he stands outside the Malibu home he shares with his wife, author and former competitive bodybuilder Katie, on a cliffside plot with scenic views overlooking Little Dume (a beloved surf break where Kelly Slater and Laird Hamilton are regulars) and out to Catalina Island. Walking through his cactus garden, host to a prized saguaro he grew from a seedling, Arnoldi discusses the life he and Katie have created here—and perpetually reinvented—over the past three decades. Arnoldi designed much of the home’s furniture; a painting from his “Potatoes” series is displayed atop the fireplace opposite a large work by his daughter, Natalie Arnoldi, while a Frank Gehry fish lamp stands along the rear wall. Photo: Firooz Zahedi

“Katie’s father was a surfer, and he bought that little beach house in the 1950s,” Arnoldi says, pointing to a shingle-roof bungalow on the bluff below. Though he and his wife would have gladly lived in that surf shack, it became a weekend retreat for family and friends, so the couple decided in 1986 to build a home on land next to the Mediterranean-style manse owned by Katie’s brother. “I was used to living in lofts and storefronts,” says Arnoldi. “When I told my buddy Frank Gehry I was going to build a house, he said, ‘Just build a box.’ ”

With some help from contractors, that’s essentially what the Arnoldis did, creating a 4,000-square-foot, three-bedroom residence composed of voluminous interconnecting cubes with walls of troweled concrete and floor-to-ceiling glass doors that run half the length of the structure. Inside, the walls are accented by steel-channel baseboards, while the millwork is hewn from marine-grade plywood—the same material Arnoldi used as the base for the celebrated series of “Chainsaw” paintings he produced in the ’70s and ’80s. Two of the artist’s large paintings from the 1990s hang in the corner of a gallery space in the studio. Photo: Firooz Zahedi

Arnoldi has installed numerous idiosyncratic touches throughout, including sculptural glass doors in the guest bedrooms and, on the front of the home, a cast-bronze balcony whose pattern conjures (and predates) Ai Weiwei’s Bird’s Nest stadium in Beijing. In the master bedroom, the artist devised a wall-size picture window that revolves on ball bearings and overlooks the double-height living-dining area, which is filled with furniture of his own design. Suspended above the long mahogany dining table is a chandelier made from bound branches that echoes the forms of the early “Stick” paintings that won him international recognition in the 1972 “Documenta” exhibition in Kassel, Germany.

Scattered throughout the house are not only Arnoldi’s artworks, including a few choice “Chainsaw” paintings, but also pieces by friends such as Gehry, Andy Warhol, Robert Rauschenberg, Ken Price, and Billy Al Bengston, as well as indigenous art and artifacts collected around the world by Katie. “Just stuff,” Arnoldi calls their collection, though he estimates he made 25,000 steps shuttling it all down to safety inside the beach house during the Woolsey Fire, which broke out in November 2018. (While a number of nearby residences burned in the blaze, the Arnoldis’ homes remained unscathed.) Countless memories permeate these spaces, and seated at the dining room table, Arnoldi recounts a few—like the time he drove the VW Beetle on which fellow artist Chris Burden had himself crucified for a legendary 1974 performance in a Venice garage. Sculptures and furniture by Arnoldi are arrayed around the pool and putting green. Photo: Firooz Zahedi

Outside, at the front of the property, Arnoldi has created a tropical folly dotted with his bronze sculptures and aluminum paintings. There’s also a 75-foot-long swimming pool surrounded by concrete seating and a putting green with artificial turf.

A seasoned golfer, Arnoldi also has a putting green next to his 15,000-square-foot Venice studio, a space carved out of a former potato chip factory that rivals any blue-chip gallery in L.A. Inside, the aesthetic shares similarities with the Malibu house, including the same distinctive plywood cabinetry. “I just can’t escape myself,” Arnoldi says of the overlap between his art and his design pursuits. The studio’s main gallery, where he makes and exhibits new paintings, is topped by a skylight that stretches some 60 feet. “I was gonna make it longer, but the building department wouldn’t let me,” he says. An Andy Warhol skull is grouped with works by Arnoldi, Ken Price, John McCracken, and Natalie in a bookcase. Photo: Firooz Zahedi

Far from slowing down, Arnoldi still spends six days a week in the studio. His most recent paintings and sculptures, the subject of multiple museum and gallery shows, include geometric abstractions based on the interlocking stones of Machu Picchu—inspired by the couple’s 35th anniversary trip hiking the Inca Trail—and a new suite of “Chainsaw” paintings made last summer during an excursion the two took to Canada’s Yukon Territory. “My wife really wants to travel more, but I have a hard time because I like to be here,” he says. “My mind is just working all the time.”

Still, it seems like the artist derives just as much pleasure building an ipe-wood tub room for Katie (with views of the Pacific) off the master bath or converting the childhood bedroom of his daughter, Natalie—an artist and marine biologist—into a home studio. For years, he’s been working on plans to level and rebuild the Venice studio, plus he’s consulting on four or five architectural projects for friends and designing a new home-studio complex with Katie atop a hill on the Ventura County line.

“I brought Frank [Gehry] up to the lot, and he said, ‘Let’s collaborate.’ I said, ‘No,’ ” recalls Arnoldi with a laugh. “I might let him design the little poolhouse. Maybe. But I’m not sure yet.”

A version of this article first appeared in print in our 2019 Summer Issue under the headline Form Meets Gumption. Subscribe to the magazine.

Cover: The artist at work on a recent painting in his Venice studio.
Photo: Firooz Zahedi
Next Post