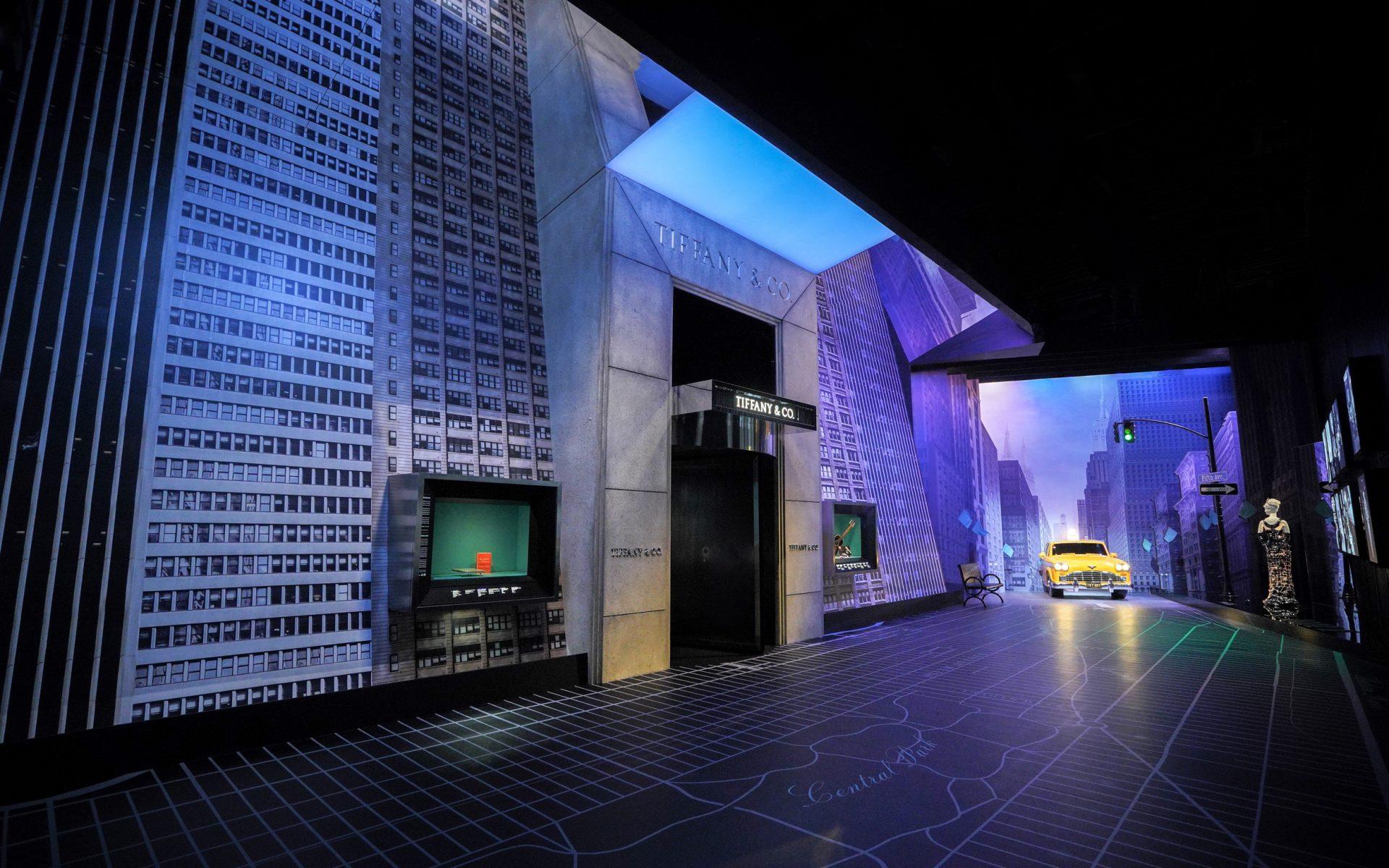 The Breakfast at Tiffany's Room in the Vision & Virtuosity exhibition at the Fosun Foundation in Shanghai.
Photo: Courtesy of Tiffany & Co.

The first-ever example of Tiffany & Co.’s now-iconic solitaire engagement ring, an original Breakfast at Tiffany’s film script, and the priceless yellow diamond worn by Lady Gaga at the 2019 Oscars are just a few of the extraordinary pieces showcased at a new must-see exhibition at the Fosun Foundation in Shanghai. Titled “Vision & Virtuosity,” the presentation is the largest Tiffany & Co. exhibition in almost a century and was devised as a tribute to the company’s 180-year history. The Tiffany-blue room in the “Vision & Virtuosity” exhibition at the Fosun Foundation in Shanghai. Photo: Courtesy of Tiffany & Co.

The legendary jewelry house, founded by Charles Lewis Tiffany in 1837,  has stood the test of time, thanks to a unique blend of masterful craftsmanship and innovative design. This new major exhibition includes some 350 artifacts—100 of which have never been shown to the public before.

Visitors embark on the historical journey via six themed rooms—Blue Is the Color of Dreams, The World of Tiffany, The Tiffany Blue Book, Tiffany Love, Breakfast at Tiffany’s, and Diamonds: Miracles of Nature. A brooch in 18K gold and platinum with white and colored diamonds, emeralds, and tanzanites from the Tiffany & Co. Archives (circa 1968), designed by Donald Claflin for Tiffany & Co. and part of the first collection of tanzanite jewelry sold by the company. Photo: Courtesy of Tiffany & Co.

The show kicks off in a room dedicated to the color blue, highlighting the brand’s signature duck-egg shade, as well as a selection of aptly colored stones such as the Montana sapphire and tanzanite, a purplish-blue gem introduced by Tiffany & Co. in 1968. Visitors get a sense of the brand’s influence on popular culture through displays highlighting Tiffany & Co.’s appearances on television and in literature. Other showcases celebrate some of the celebrities who have worn the jewels throughout history—Elizabeth Taylor, for example, once owned a sculptural sapphire, diamond, platinum, and gold Fleur de Mer brooch by Tiffany & Co. designer Jean Schlumberger. A gift from her husband Richard Burton, the brooch was reacquired at auction from the Taylor estate in 2011. The Blue Book, which was first introduced in 1845, is Tiffany & Co.’s annual high jewelry presentation. On display in Shanghai is the rare original catalogue as well as new pieces from the current collection under the leadership of chief artistic officer Reed Krakoff. Detail of a display in the Tiffany Love Room, where masterful examples of the iconic engagement ring are displayed. Photo: Courtesy of Tiffany & Co.

The theme of love is explored through various examples of the iconic Tiffany setting diamond ring. Founder Charles Lewis Tiffany conceived the now-infamous setting, which is defined by its six-prongs lifting a round shaped diamond above a slender gold band. The look, which was first debuted in 1886, was a departure from the traditional setting, where diamonds were encased in bezels, meaning that the stones were completely encircled in precious metal.

Recommended: The Top 9 Booths to See at Frieze London An archival photograph of Audrey Hepburn on the Breakfast at Tiffany’s set. Photo: Courtesy of Tiffany & Co.

Truman Capote’s beloved book turned film, Breakfast at Tiffany’s, has inspired many pilgrimages to the New York store. Here, the movie is represented through behind-the-scenes stills of the Fifth Avenue flagship as well as an original script that includes Hepburn’s personal notes scrawled across the pages and other curated objects from the film. The final room celebrates diamond jewelry from the gilded age and Art Deco period through to today. There, the 128.54-carat fancy yellow diamond pendant worn by Lady Gaga at the 2019 Oscars is sure to draw a crowd. The stone, one of the largest yellow diamonds in the world, was discovered in South Africa’s Kimberley diamond mines in 1877 and was purchased by Charles Lewis Tiffany a year later. It was then sent to Tiffany gemologist George Frederick, who cut the stone into a rounded cushion-cut weighing a staggering 128.54 carats with 82 facets.

“Vision & Virtuosity” is on view at the Fosun Foundation in Shanghai through November 10.

Cover: The Breakfast at Tiffany's Room in the Vision & Virtuosity exhibition at the Fosun Foundation in Shanghai.
Photo: Courtesy of Tiffany & Co.
Next Post