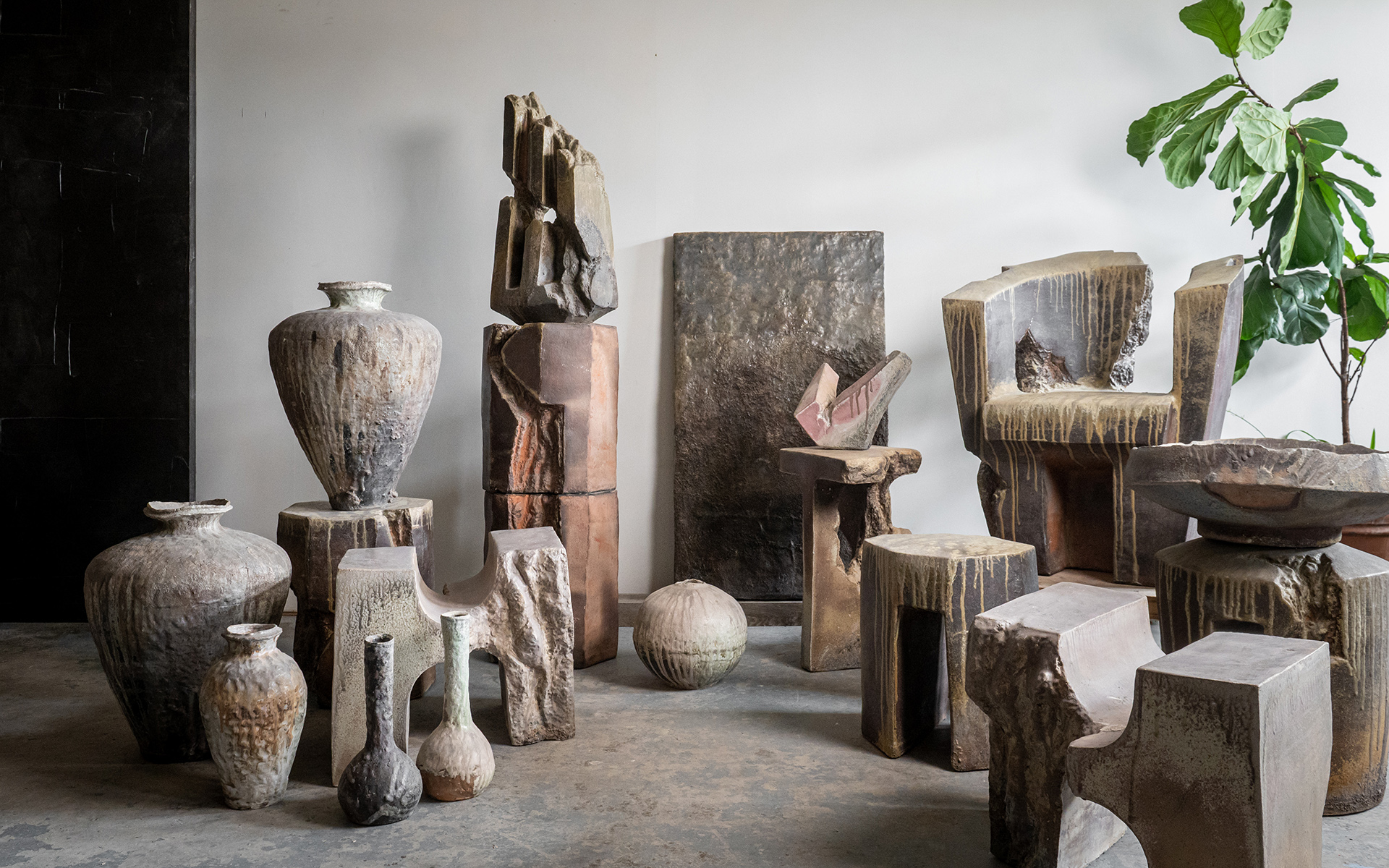 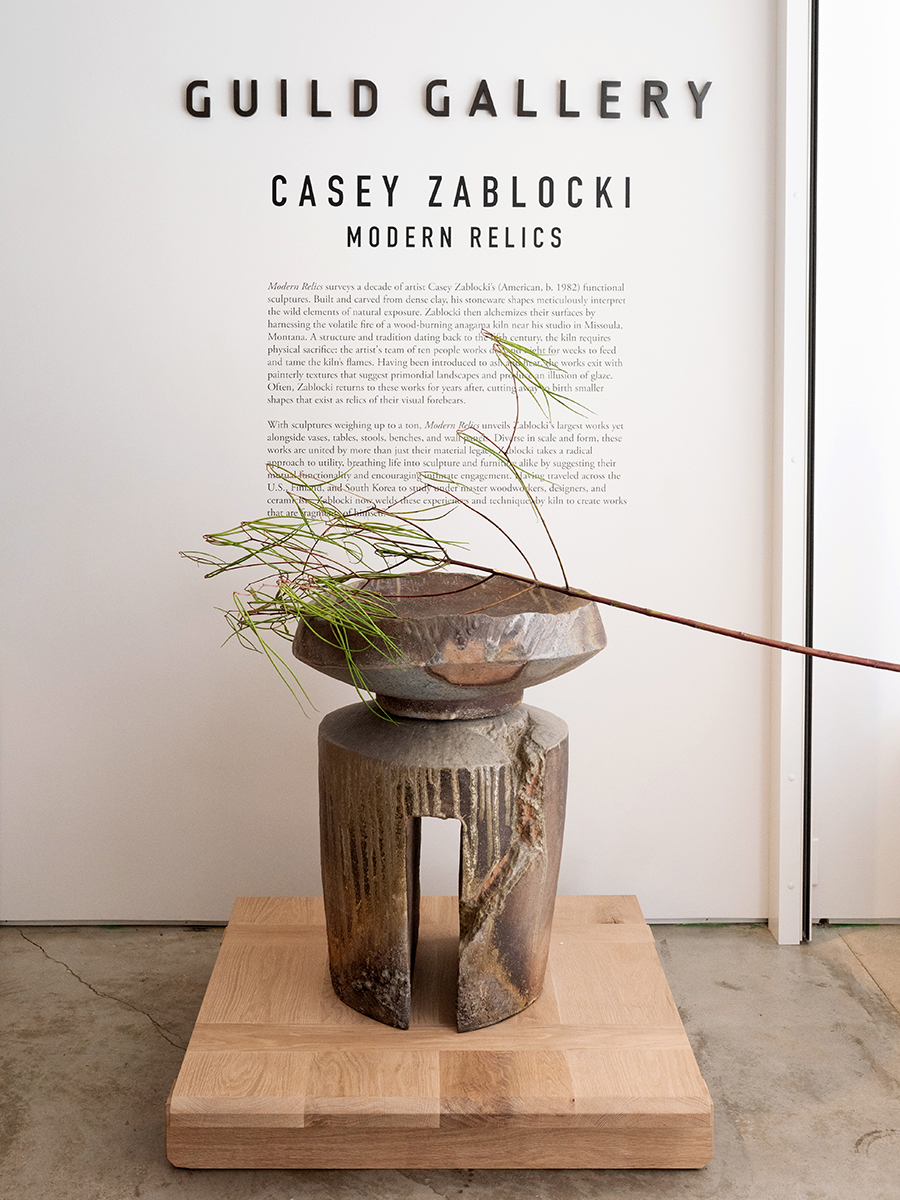 “Modern Relics” is on view at Guild Gallery through November 12. Photo: KAYLA MCCORMICK

Perched on a mountainside in Missoula, Montana, a massive East Asian–style “cave kiln” is where artist Casey Zablocki produces monolithic sculptures, statement-making furnishings, and distinctive vessels that have fast caught the attention of collectors around the world. Despite their eroded-concrete appearance, all of Zablocki’s works are hollow ceramics with rugged surfaces that evoke harsh landscapes on a miniature scale. “I want you to see the world in my work,” explains the Michigan-born talent. “I’m trying to reference lake beds and dry rivers, the sky and stars a little bit, and even our universe in a way.”

Known as an anagama, the special type of wood-fire kiln he uses dates back at least 1,500 years in Japan and heats earthenware up to 2,300 degrees Fahrenheit for days on end. “It gives my work that aged-in-the-ocean or buried-in-the-ground effect,” says Zablocki, who eschews traditional glazes in favor of the natural wood ash produced by the blaze. “Each piece is totally one-of-a-kind.”

Now, Zablocki’s brutalist-inspired works are the subject of his first solo show in New York, at Soho’s Guild Gallery, the new fine-art platform from Roman and Williams Guild cofounders Robin Standefer and Stephen Alesch. On view through November 12, “Casey Zablocki: Modern Relics” encompasses some 66 stoneware pieces made over the last decade, with the “bones” of the exhibition crafted in the last three years. “I had 5,000 pounds of clay and 20 cords of wood at the beginning of COVID,” Zablocki recalls. “It gave me the opportunity to start experimenting not just with function but also more sculptural objects.” 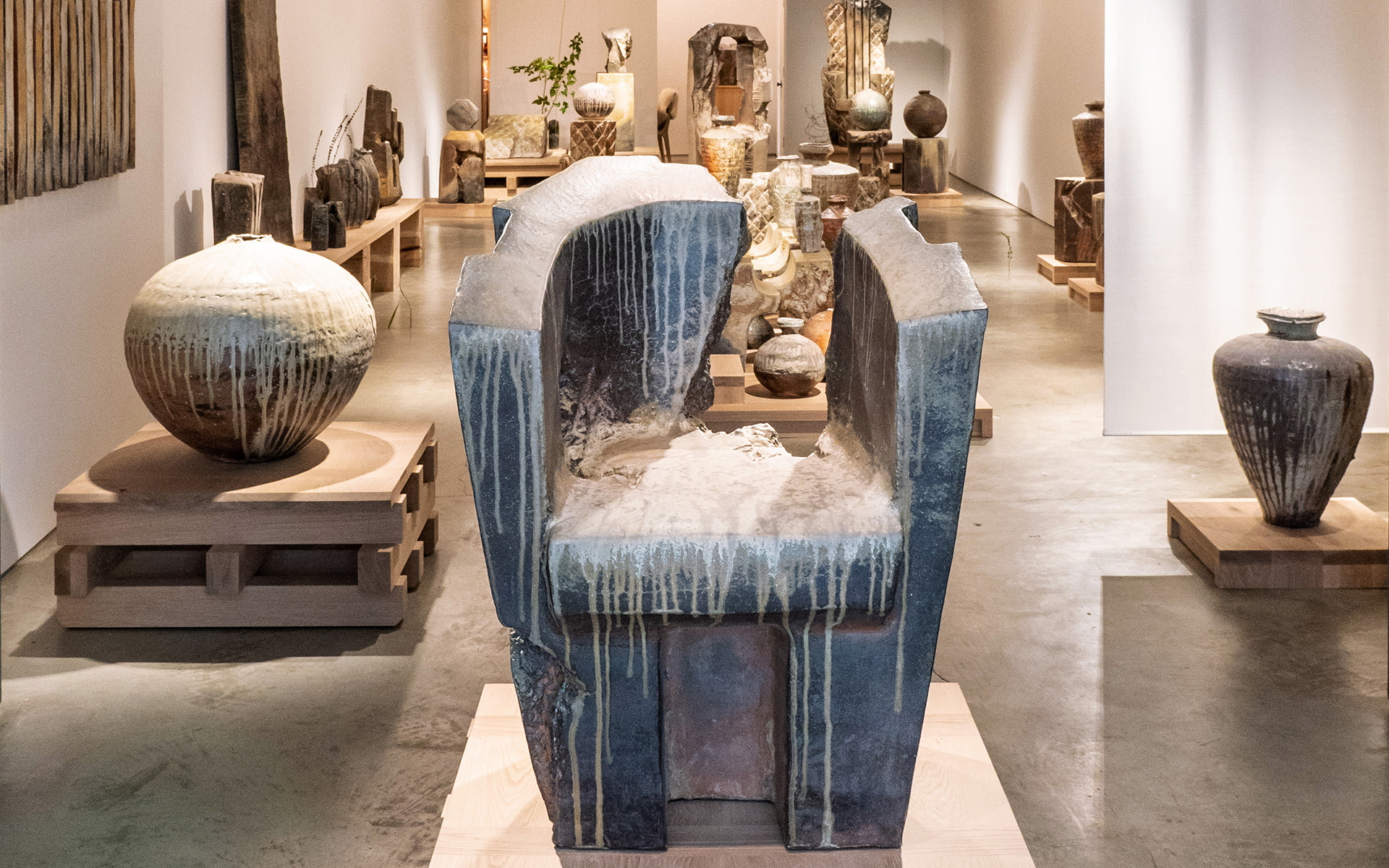 Indeed, one of the first pieces that greets visitors to the space is Zablocki’s largest work to date, a towering monolith with a jagged, vaguely anthropomorphic form. (The 1,200-pound piece is so large, in fact, that it had to be fired in two batches and joined together.) “I’m trying to blur the lines of function and art,” he says. “Function tends to create a relationship with the viewer right away, but sculpture brings a unique personality and energy to the work.” This poetic combination of art and design has has been clearly influenced by artists such as ceramic master Hun Chung Lee, with whom Zablocki apprenticed around eight years ago in South Korea. “I don’t want you as the onlooker to get too comfortable with my work,” he says. “Then you start to expect something from it.” 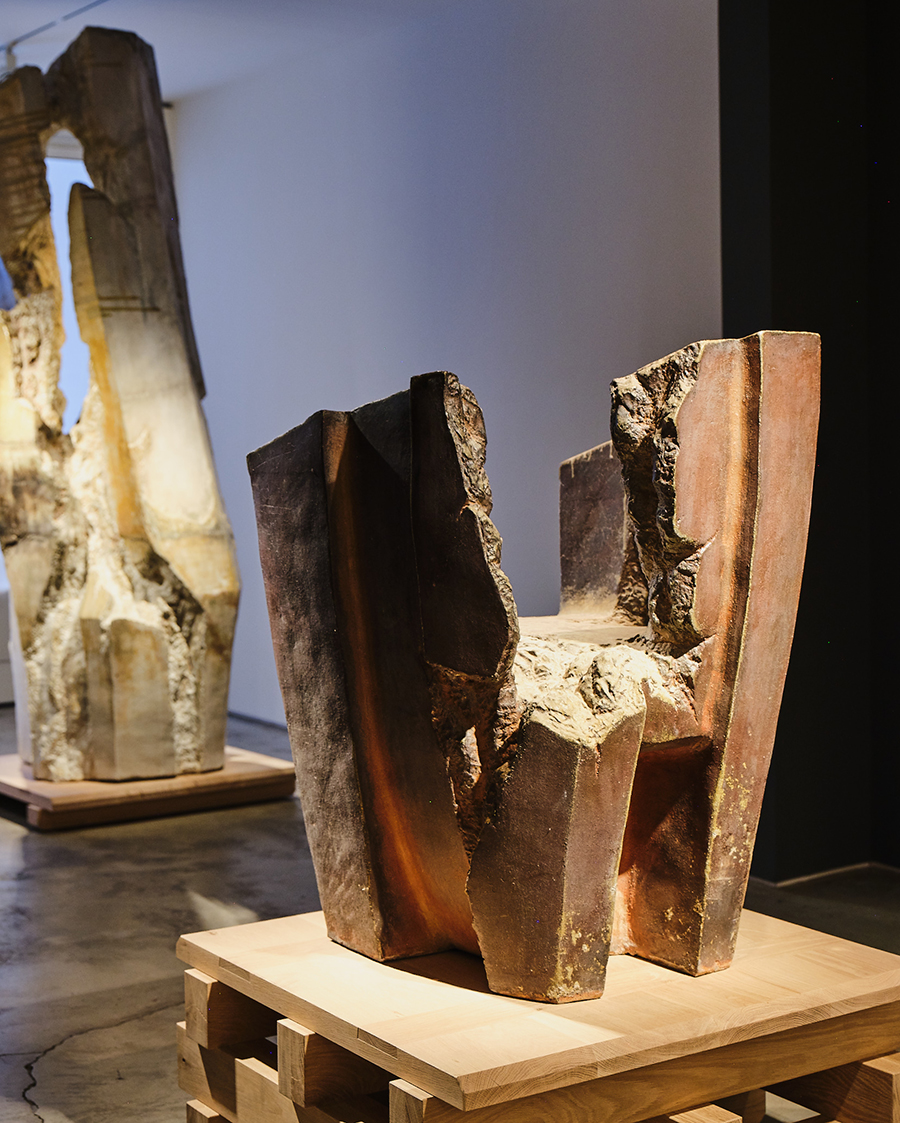 “Modern Relics” is on view at Guild Gallery through November 12. Photo: FREDRIKA STJARNE 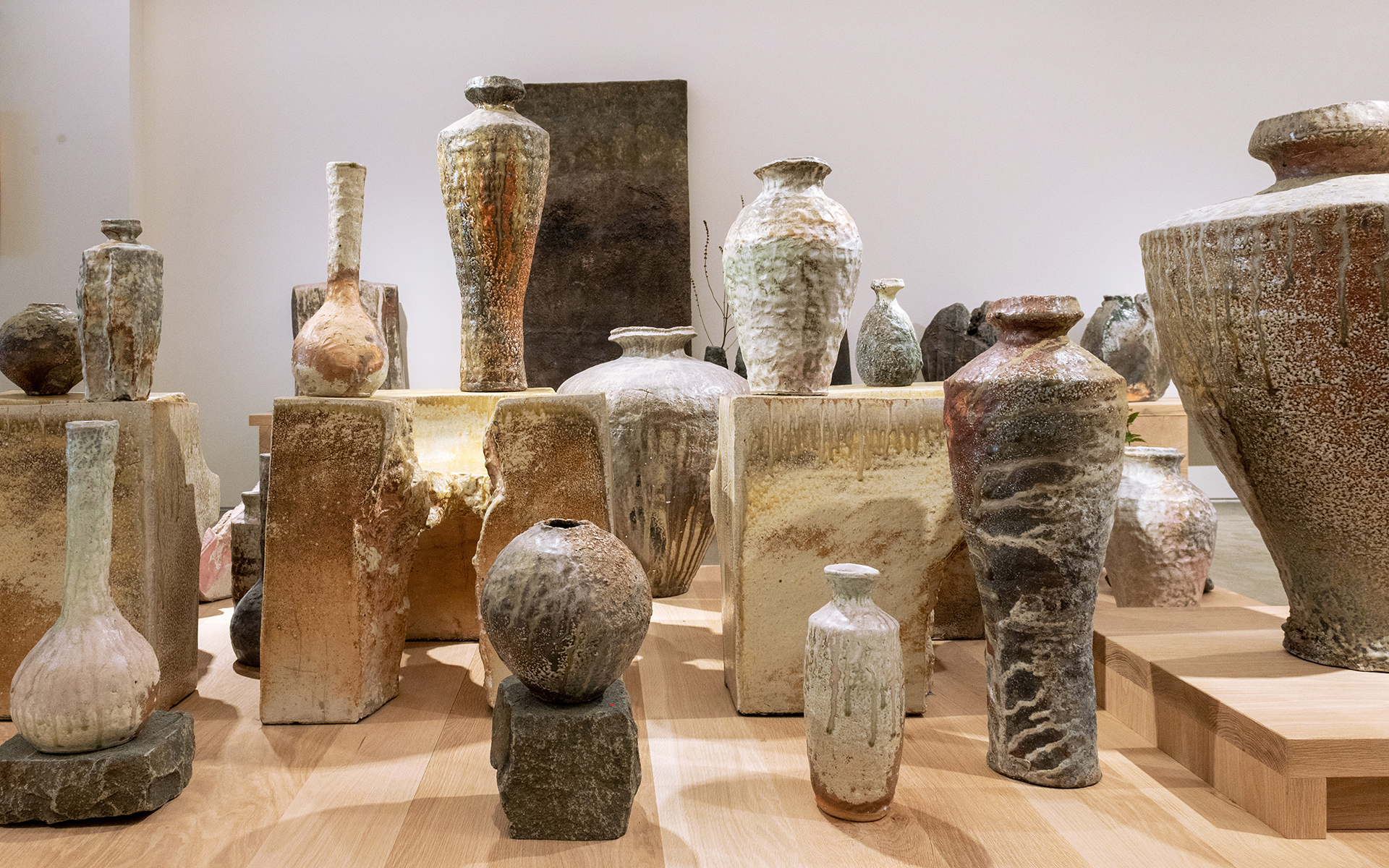 “Modern Relics” is on view at Guild Gallery through November 12. Photo: KAYLA MCCORMICK 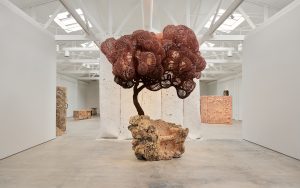 The idea of rebirth is also a potent theme in the show, since during Zablocki’s labor-intensive process one piece often becomes the progenitor of another. For instance, a statement chair on display lost portions of its sides during firing, but those chunks soon became sculptures in their own right. “It’s like the work is birthing more work,” he says. Other eye-catching pieces include a sculptural bird bath designed to be installed in nature. “My work definitely does well outside,” he laughs. “I have one at home that the birds absolutely love. It’s nice that my work is good enough for the animals.” 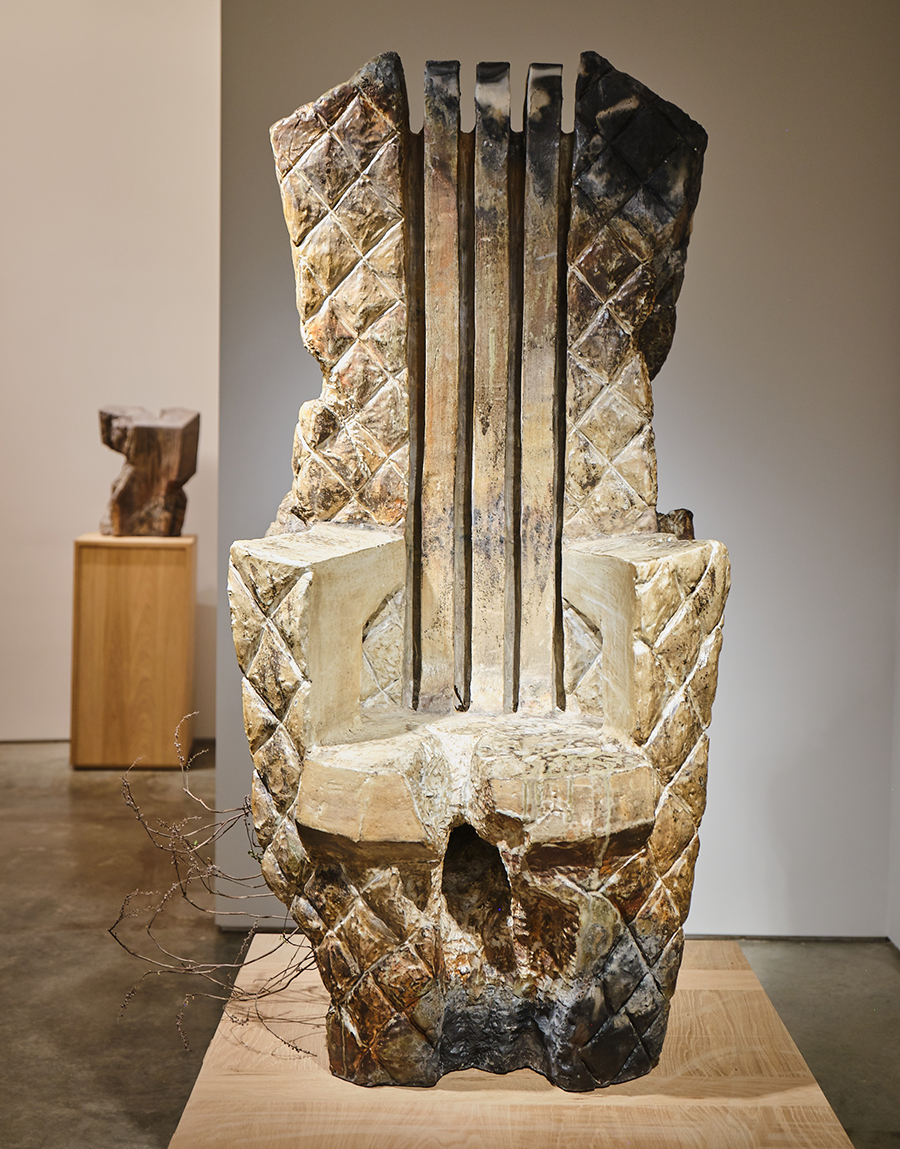 “Modern Relics” is on view at Guild Gallery through November 12. Photo: FREDRIKA STJARNE

Despite his success, however, Zablocki is quick to quell any notion of resting on his laurels. “I want to explore and keep on progressing further and further,” he enthuses. “If I’m stagnant and not childlike with it, I don’t feel like I’m growing. Especially creating this big sculpture, I feel like it’s a new birth for me. I wasn’t ready for a show like this until now. It took 18 years working in clay to get to this point to feel comfortable.”

“Casey Zablocki: Modern Relics” is on view through November 12 at Soho’s Guild Gallery.