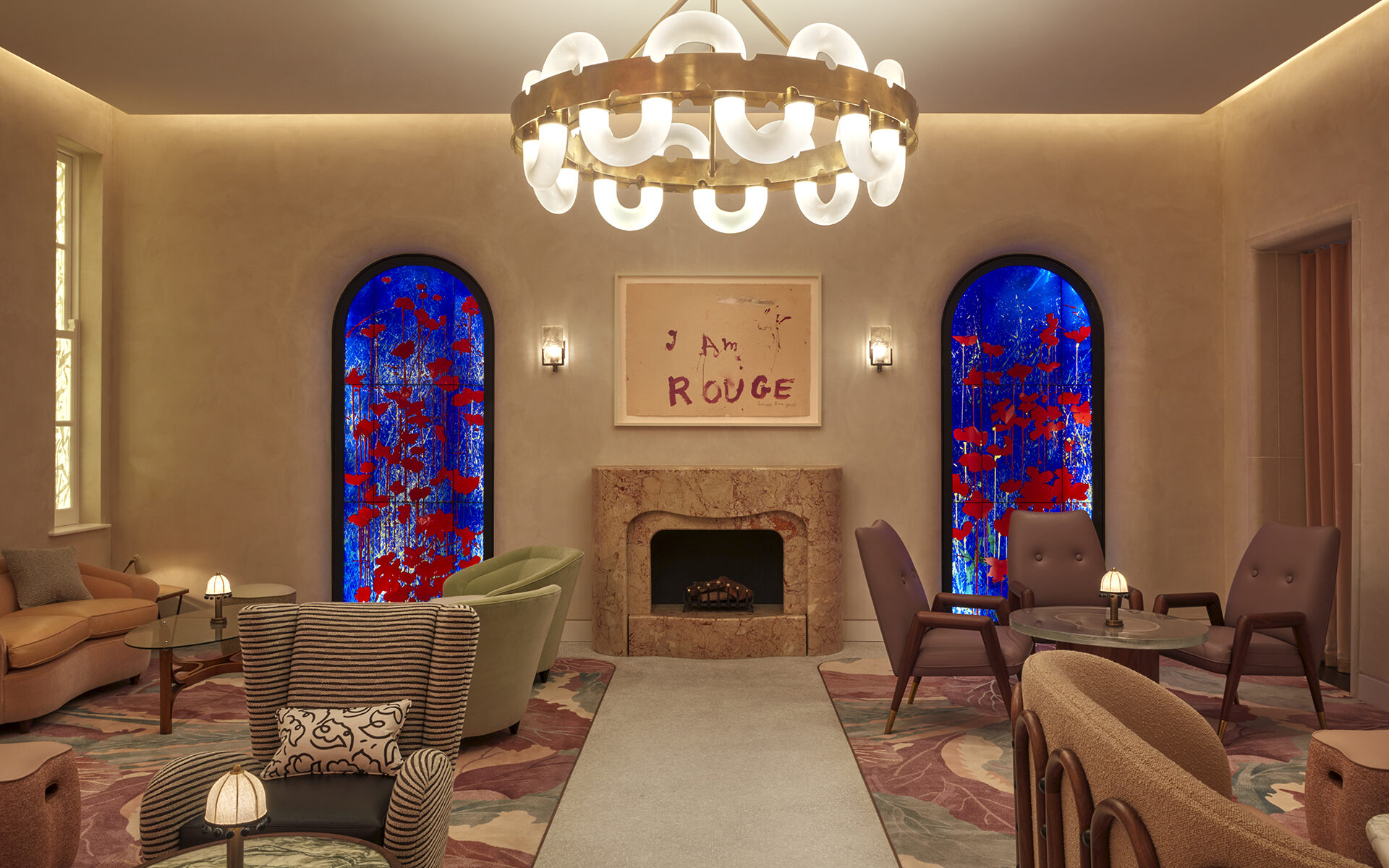 Bryan O'Sullivan's design for the Red Room at London's Connaught hotel features a pair of custom Brian Clarke stained-glass panels and a Louise Bourgeois artwork as well as a series of curvaceous furniture and lighting pieces.
Photo: James McDonald 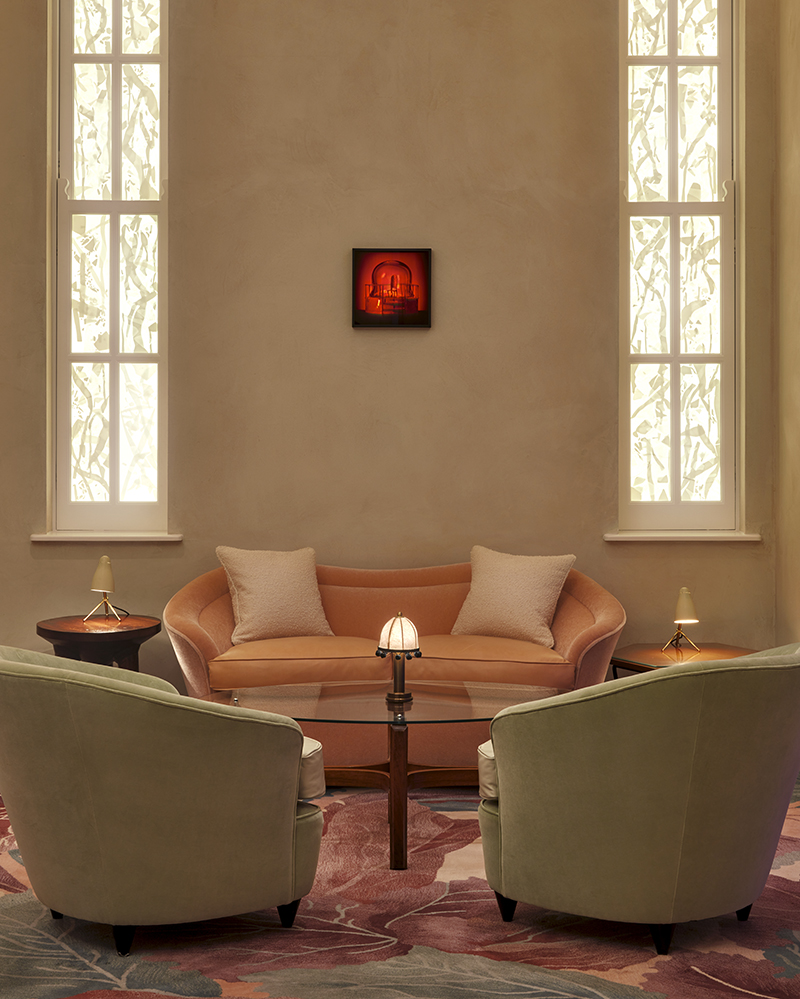 “The hope for the room is to make it feel like it’s a collector’s living room,” says O’Sullivan, who filled the interior with art from hotel owner Paddy McKillen’s cache, including canvases by Louise Bourgeois, Jenny Holzer, and Trina McKillen, the hotelier’s sister and an established multi-media artist. “He had these amazing pieces of art that all had hints of red in them so it brought us into thinking about the idea of it being the Red Room. It just feels like a quiet, relaxed, comfortable space.”

To better understand the exquisite details that make this secluded space such a standout, Galerie spoke with the designer, who discussed the significant artworks that informed the interior and the custom pieces that make this speakeasy-style room a must-visit destination. 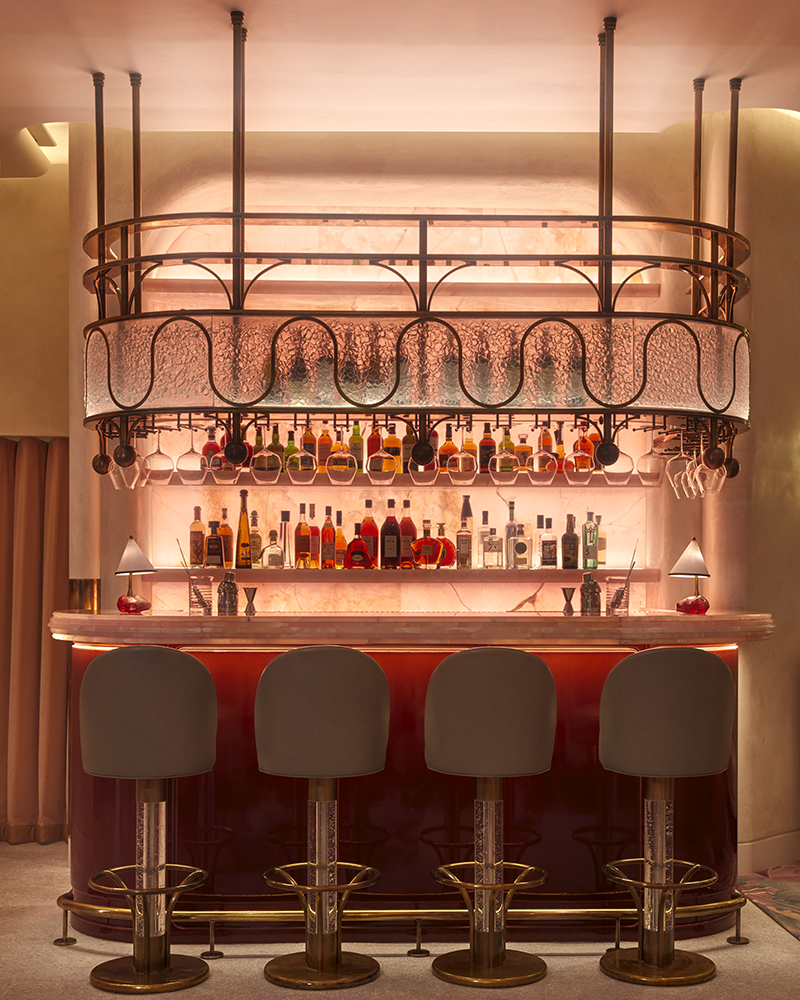 O’Sullivan clad the front of the bar in a pink lava stone ceramic tile then topped the piece with pink onyx. Another slab of pink onyx was back lit to create the ethereal backdrop that was fronted by cantilevered shelves. “It adds a lot of drama,” says the designer. “You enter the room through this Champagne bar the hotel has always had, and once you’re through the velvet curtain, the whole room reveals itself.” 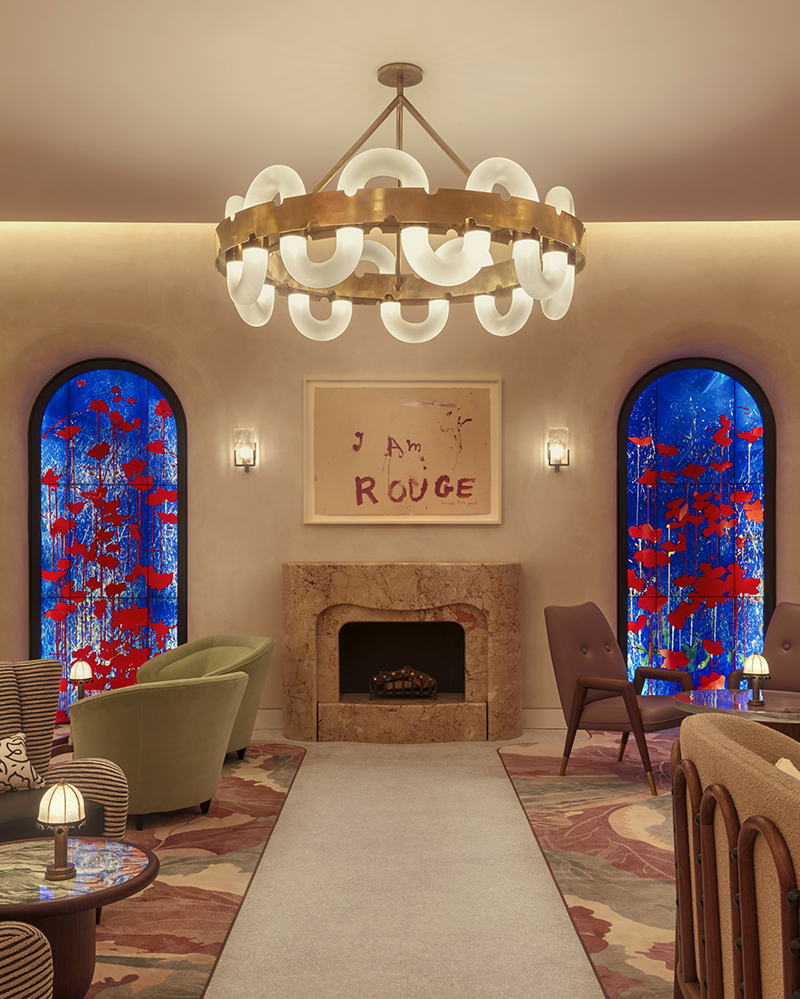 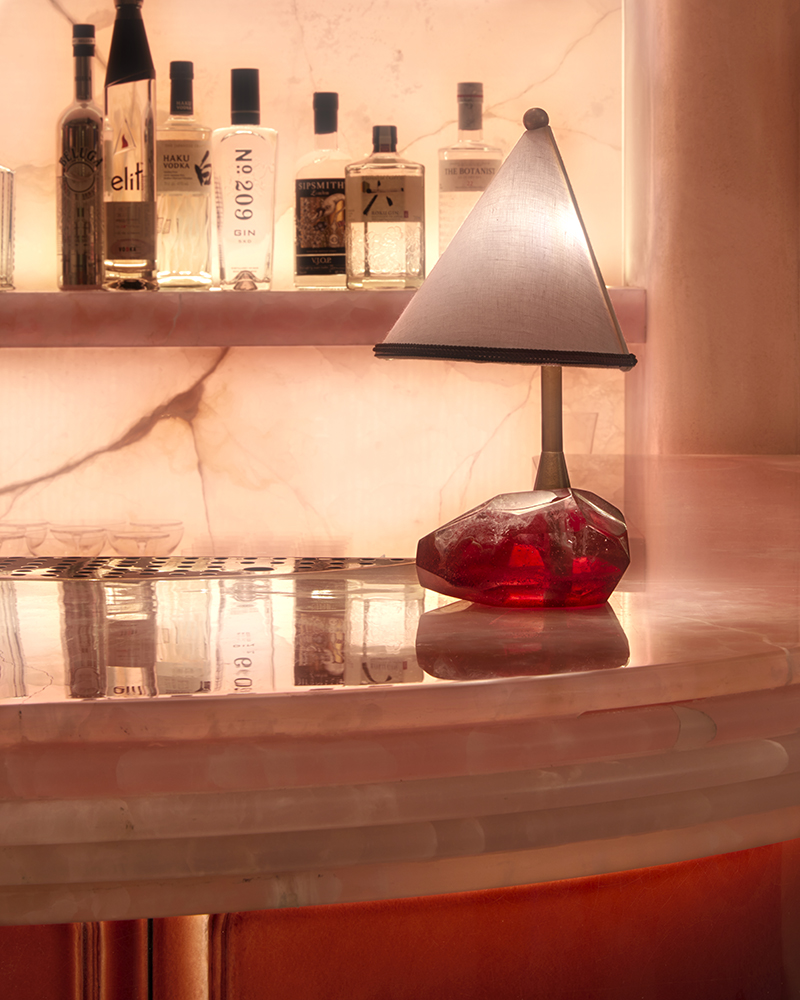 Bryan O'Sullivan commissioned Eoin Turner, an artisan in Ireland, to create the jewel-like glass shards that the designer transformed into lamps situated on either side of the bar. Photo: James McDonald

To create the Red Room, the hotel acquired an adjacent jewelry store and transformed the square footage into a patisserie, cigar shop, and this romantic speakeasy. But with its tucked away location, the lounge got little to no natural light. Two old-fashioned narrow windows, discovered during the room’s renovation, were enhanced with energy panels to give the illusion of daylight that fades to dusk. A wave detail on the gantry coincides with the squiggle-shape custom chandelier that crowns the space. “We felt it needed something quite playful, but striking as well,” says the designer, who also commissioned Irish artisan Eoin Turner to create a pair of jewel-like shards that were transformed into table lamps that illuminate either end of the bar. 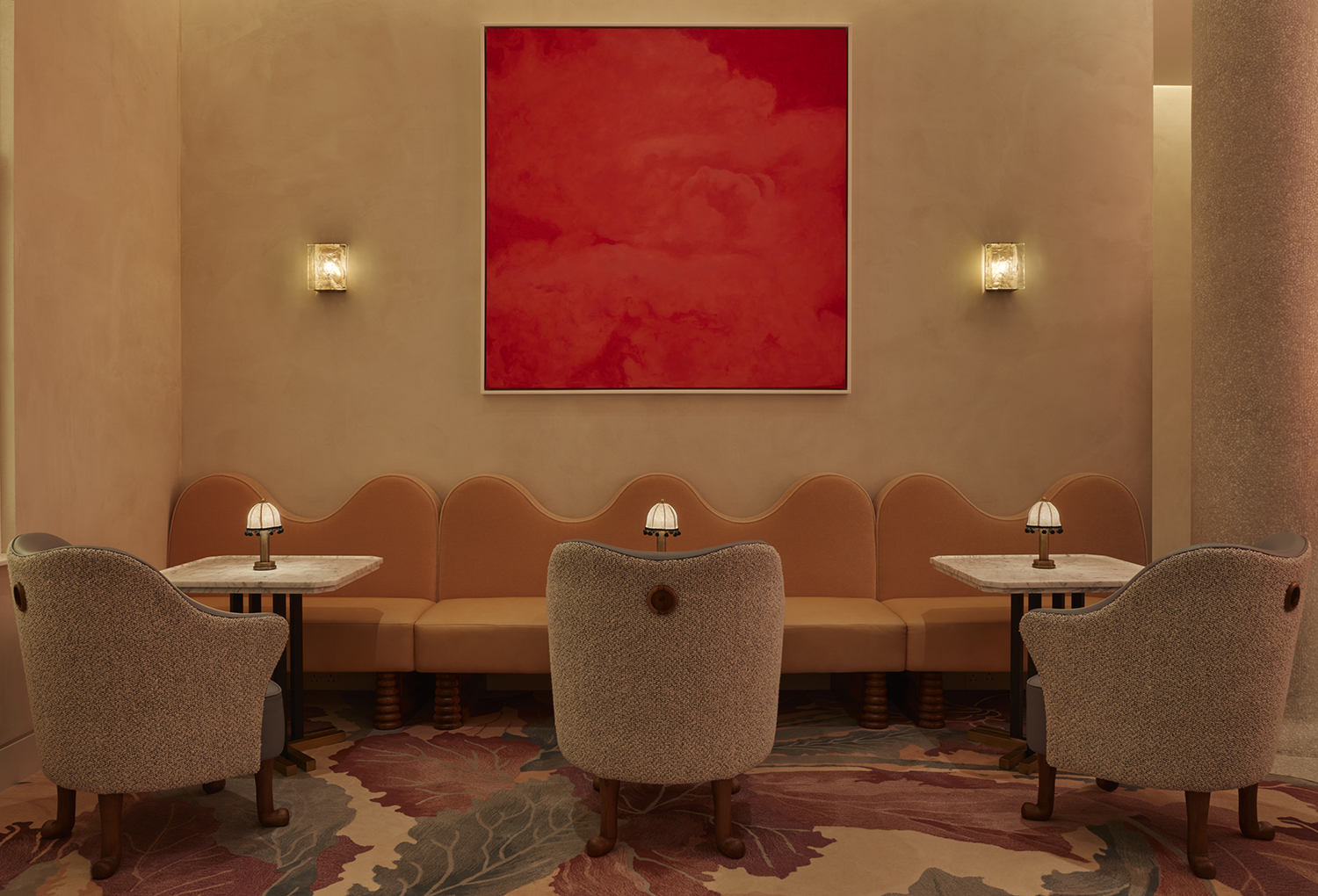 Chosen as a focal point of the space, Louise Bourgeois’s I Am Rouge informed the Red Room’s moniker, which carries over onto a bold canvas by Vietnamese talent Tia-Thuy Nguyen, a tiny Bourgeois “Hologram,” and a Jenny Holzer artwork. A pair of commissioned Brian Clarke stained-glass panels, uniquely crafted in a curved frame, flank the room’s cozy fireplace. Further into the space, a custom Gaudí-inspired shelving unit holds a rotating display of figurative objects. “Paddy liked the idea of these being changed out seasonally, so you could do little exhibitions by different artists,” says O’Sullivan. “It plays in again with the idea of this being an art collector’s living room. It makes it feel a little bit more residential as well.” 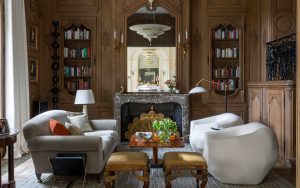 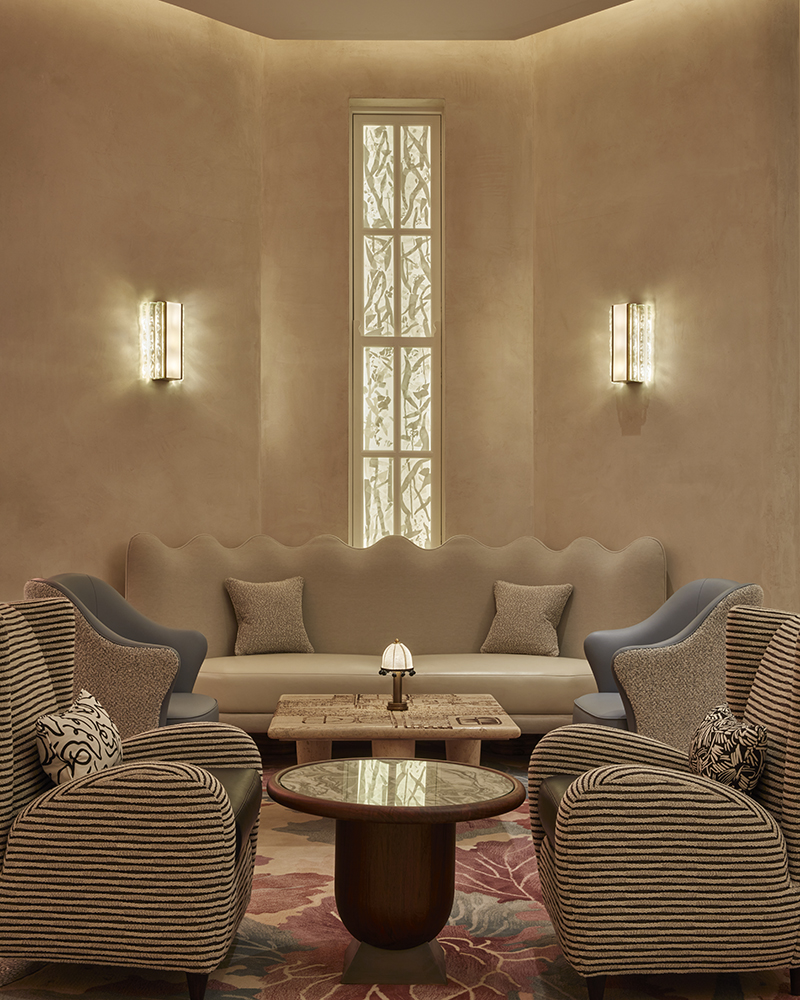 Narrow windows uncovered in the renovation were enhanced with energy panels to create the illusion of daylight that fades into the evening hours. Photo: James McDonald 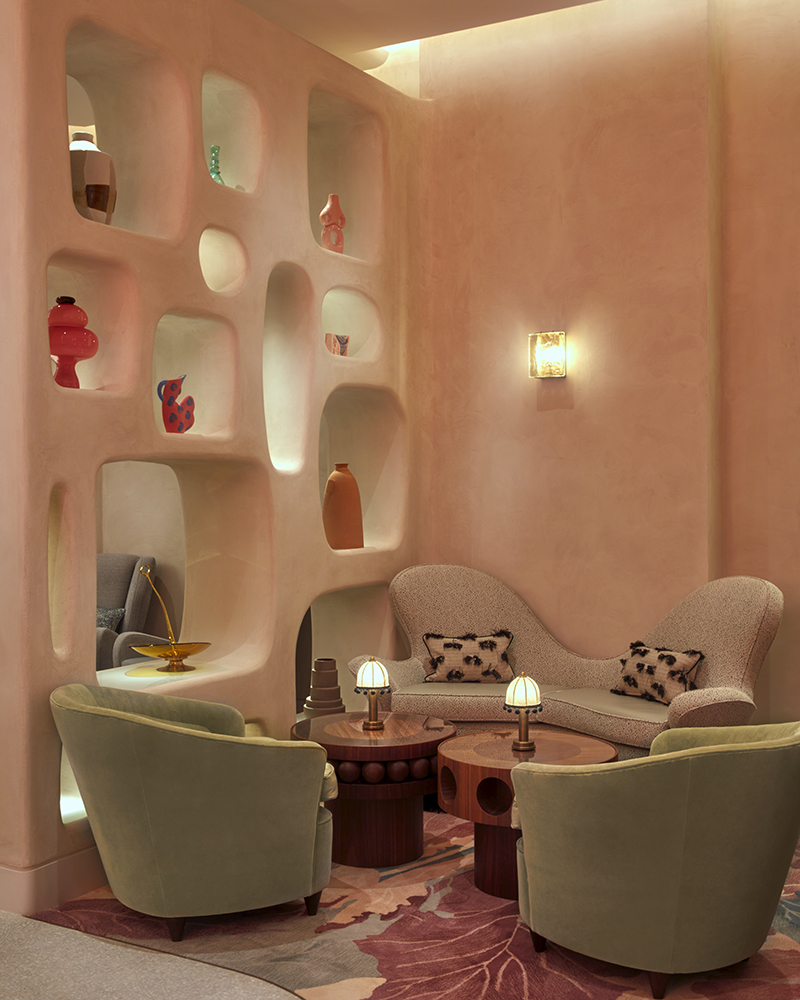 Much of the plush seating and tables were custom designed by O’Sullivan’s studio with a few exceptions, including a selection of antique sofas and chairs that were purchased at auction in Italy. “We wanted everything to feel tactile and soft,” he says of the interior plan, which features almost no hard edges. “It just makes it quite a nice, relaxing space to spend time in.” Decadent bouclés and woven wool upholstery add to the sumptuousness of the space, while the bespoke rugs were inspired by Italian designs from the 1950s and ’60s. “There were a lot of hard surfaces so they help the acoustics and make the room feel softer,” he says of the large-scale floor coverings that help define the bar’s residential-like conversation zones. 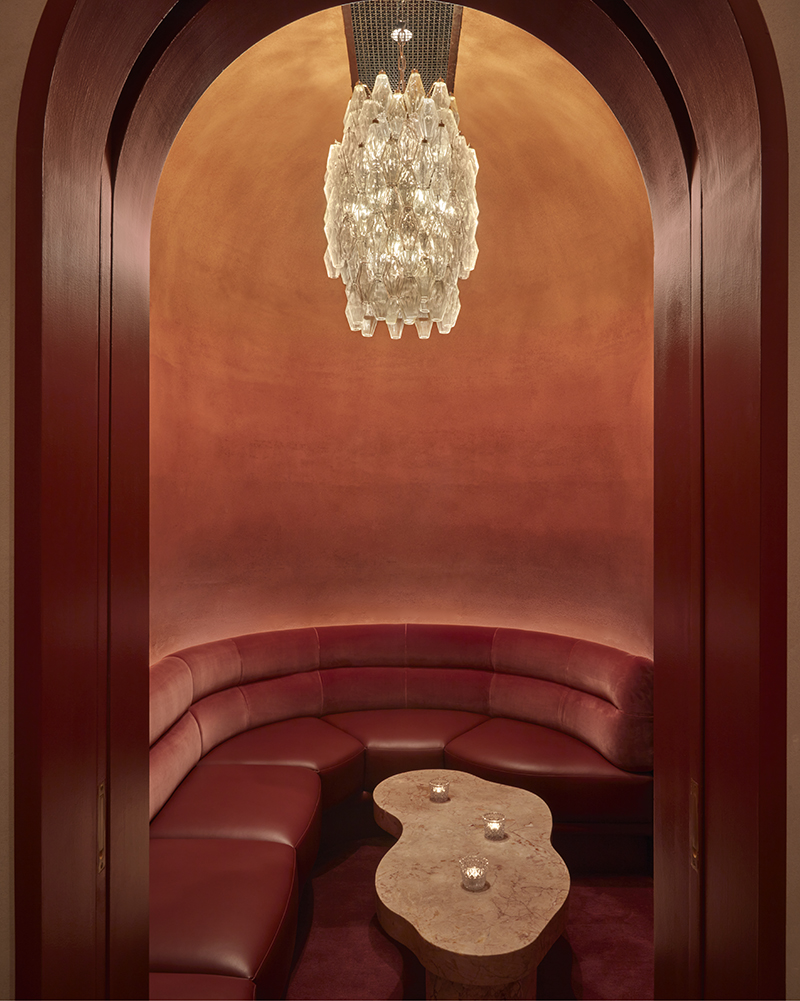 The bar's snug is enveloped in shades of red, including plaster walls that fade from dark to light as it gets closer to the domed ceiling where a beautiful chandelier illuminates the curved banquette. Photo: James McDonald

An illuminated column of handmade mosaic tiles was constructed by Italian artisans to create the illusion of being poured from the ceiling and into the terrazzo floor. “It all adds to the playful, whimsical concept of the room,” O’Sullivan tells Galerie. An arched doorway leads into the snug, where ombre red plaster walls curve into a dome where a shimmering vintage chandelier punctuates the space. “The main room is just accents of red; this space is completely red,” he says. The sculpted plaster shelving unit further helps define a seating area while offering windows onto the rest of the action. “You can have that element of privacy, but you can see through so you feel connected at that same time. It’s all about subtly creating drama.”

Cover: Bryan O'Sullivan's design for the Red Room at London's Connaught hotel features a pair of custom Brian Clarke stained-glass panels and a Louise Bourgeois artwork as well as a series of curvaceous furniture and lighting pieces.
Photo: James McDonald
Next Post