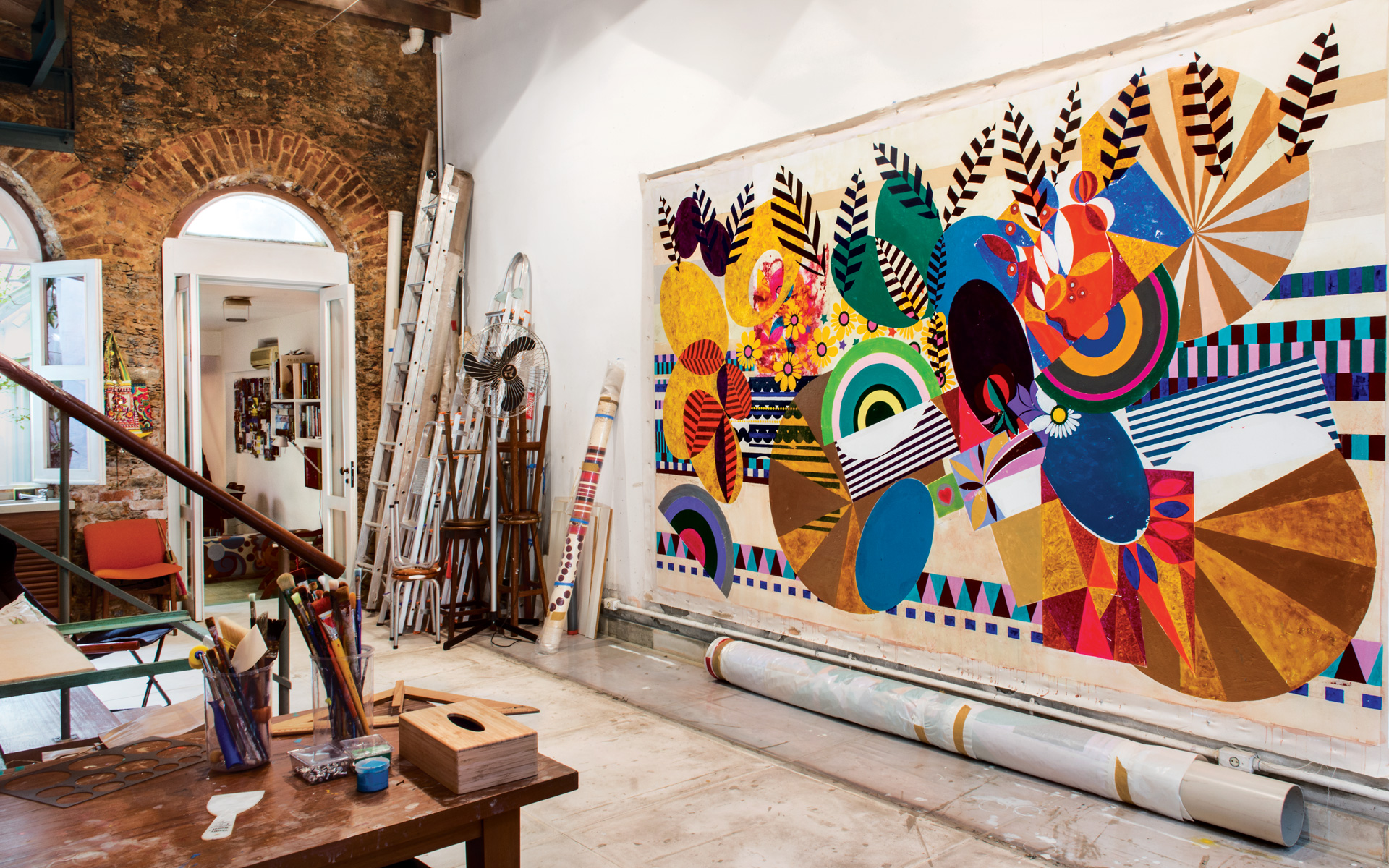 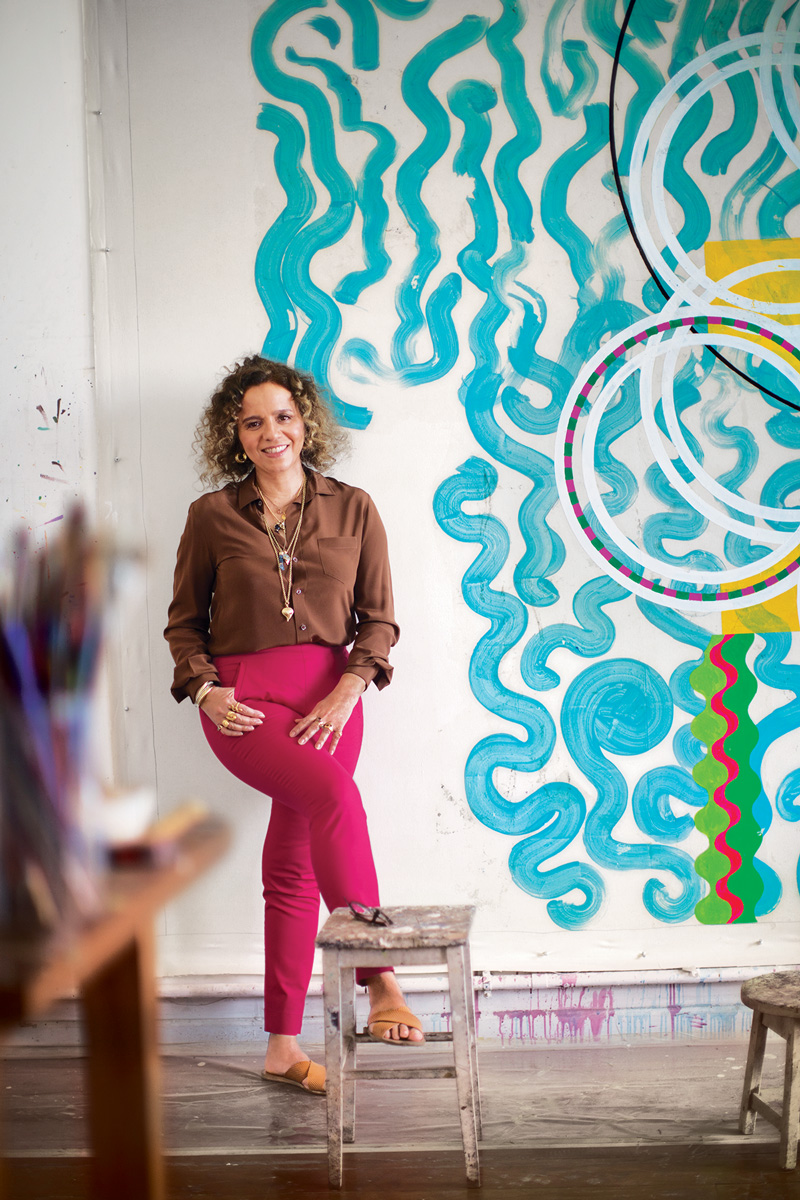 “Rio is a city that has a lot of contrasts,” says Beatriz Milhazes, the internationally acclaimed painter who was born in Rio de Janeiro and has long been based there. Working out of a studio adjacent to botanical gardens and the sprawling Tijuca forest beyond, Milhazes lives surrounded by tropical flora and the sea, in a dense urban setting famous for its exuberant annual Carnival celebrations. “All these strong things in my environment are also my endearments,” she says. “I really need this context to work.”

Over the past four decades, Milhazes has been creating spirited abstract compositions that explode with overlapping geometric shapes and patterns in vibrant colors. Her work draws inspiration from European and Brazilian modernists such as Piet Mondrian, Henri Matisse, Tarsila do Amaral, and Lygia Clark, while also incorporating references to Baroque decorative arts, indigenous motifs, and Carnival props. “I began taking things that were considered low art and bringing them into the universe of painting, which is high art,” says Milhazes, who switched her studies from journalism to art on the advice of her mother, an art historian. When she started her studio practice in the early 1980s, she experienced the feeling of having been given a mission. “My entire life since this moment, I have focused only on how to develop my language,” says the artist, “trying to bring something new and moving abstract art forward.” 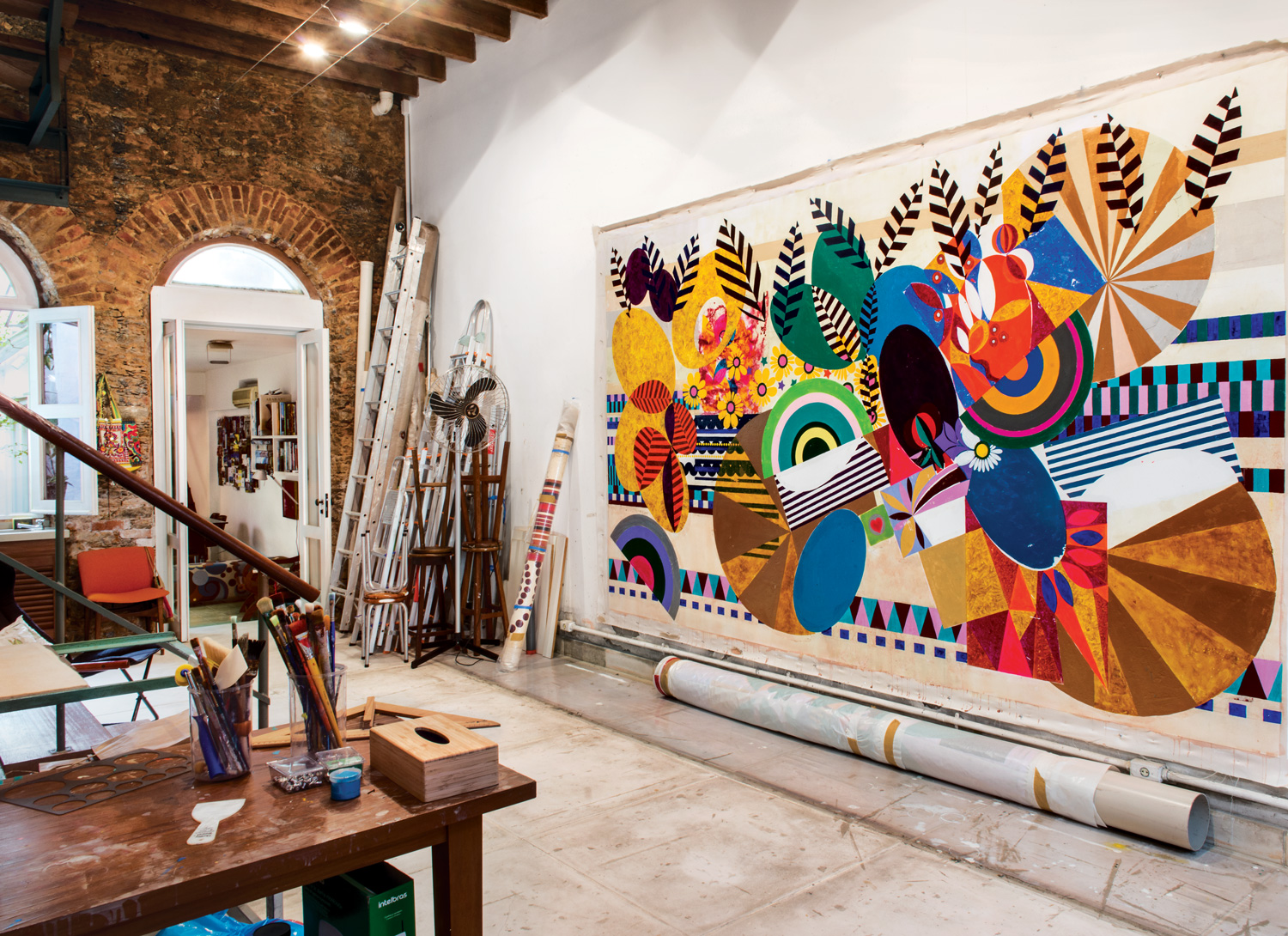 Milhazes’s approach to the canvas has always involved collage, at first combining fabric, lace, and paper cutouts. In 1989, she devised her signature mono-transfer technique, which entails painting abstract forms on clear plastic sheets, adhering them to the canvas, and peeling off the plastic once the paint has dried. “I could develop my own motifs by hand, and it opened up the whole world for me,” she says. Milhazes continues to use this process to build her dense compositions, allowing each addition to inform her next move like a chain reaction.

Circular shapes, repeating and layered like fireworks, have long dominated her paintings. Milhazes likes their organic quality and sense of visual movement, spiraling and proliferating across fields of stripes and rectangular patchworks. “Geometry is the way of organizing my imagination, how I can link it to life,” says the artist, who had a large retrospective at the Pérez Art Museum Miami in 2014.

Circular shapes, repeating and layered like fireworks, have long dominated her paintings. Milhazes likes their organic quality and sense of visual movement, spiraling and proliferating across fields of stripes and rectangular patchworks. “Geometry is the way of organizing my imagination, how I can link it to life,” says the artist, who had a large retrospective at the Pérez Art Museum Miami in 2014. 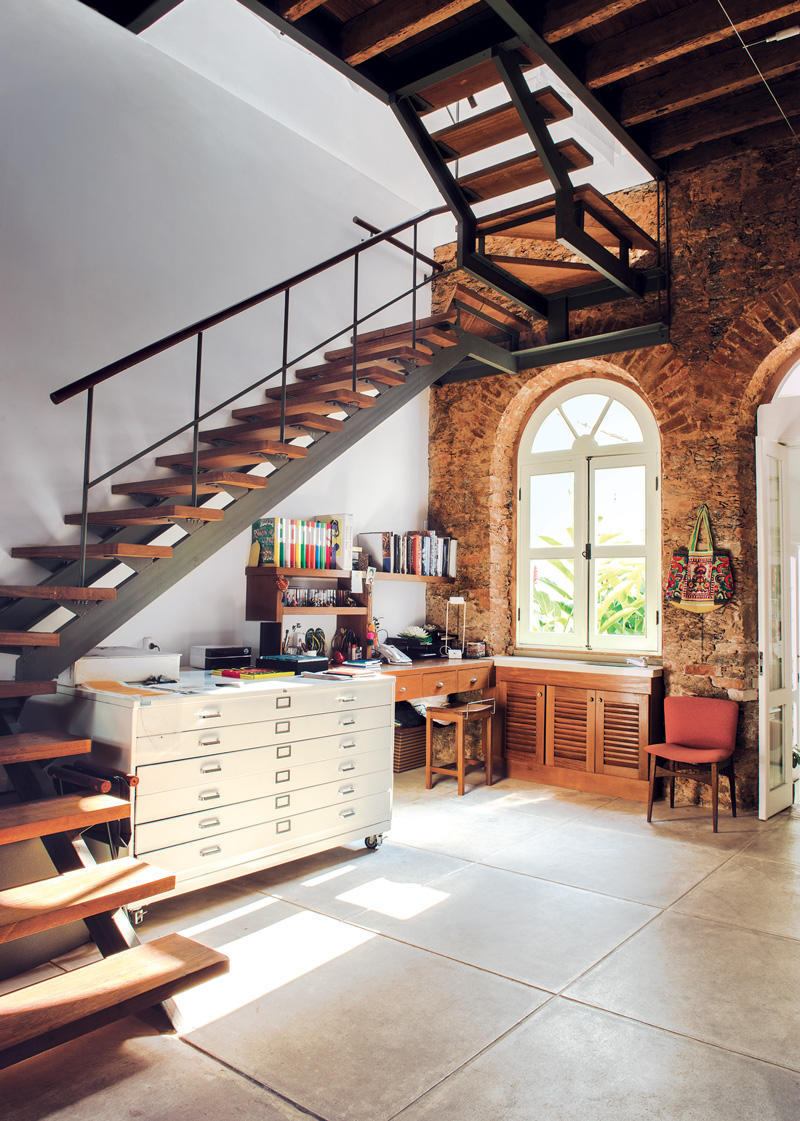 For the past five years, she’s been using diagonals as a way to fragment the circles and create more of a sense of three-dimensional receding space. That approach was evident in her recent exhibition “Mistura Sagrada” (meaning “sacred mixture”) at Pace Gallery in New York, her first solo show in the city in seven years. In these latest works, all made during the pandemic, Milhazes’s circles seem to revolve and spin in dreamlike landscapes—botanic, aquatic, celestial. Grandly scaled, measuring up to ten feet across, the canvases introduce elements of stylized figuration, referencing flowers, trees, animals, bubbles, totems, and planets.

“The waves are not just curves but really became oceans,” says Milhazes, who during the depths of COVID-19 discovered the gardens by her studio, where she took frequent walks, and engaged with time and space differently. Several of the paintings were based on pencil sketches
she made at home during lockdowns, mapping out entire compositions, a new method that ushered in a greater sense of narrative. “I really thought about the earth, the sun, the night, the moon, looking at nature and how nature could be renewed,” she says. 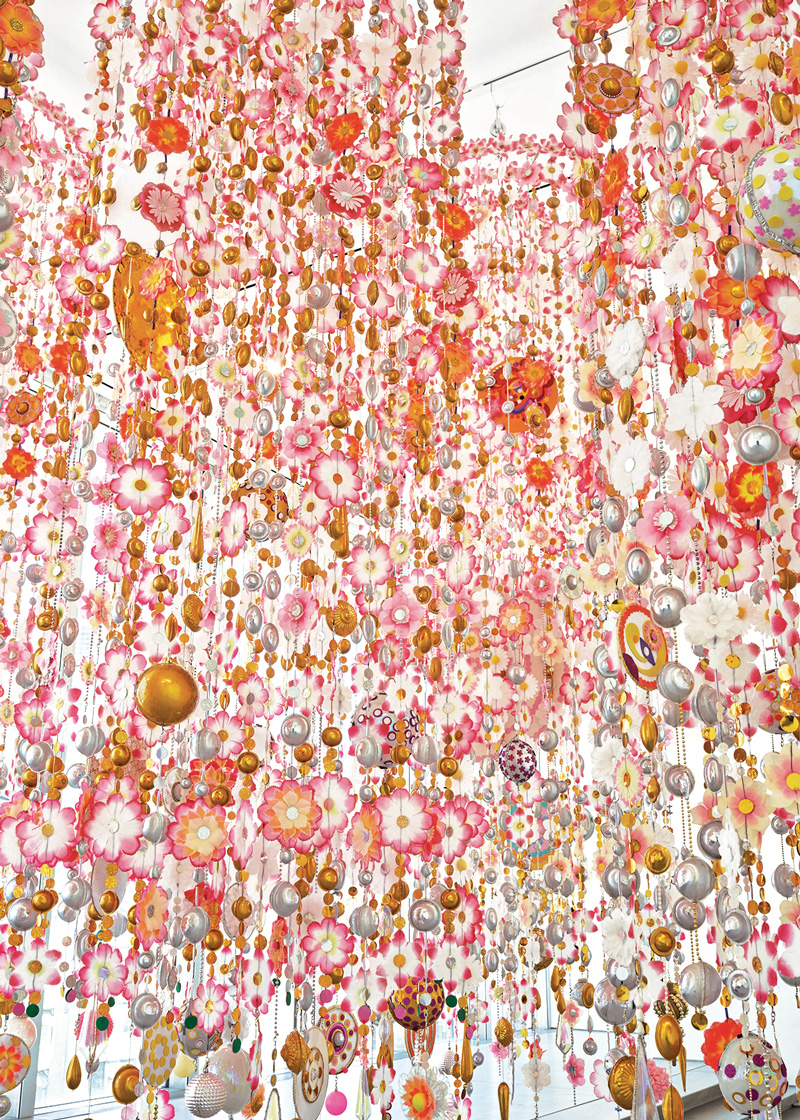 Also on view at Pace was a dazzling mobile, part of a series of hanging sculptures stemming from Milhazes’s 2004 set design for Tempo de Verão (Summertime), a dance performance choreographed by her sister. For a piece titled Gamboa III, Milhazes collaborated with Rio’s samba schools, which make props for the Carnival parade. Artisans there created some 3,000 hand-painted flowers and other ornaments—made with foam board, textiles, plastic, and plexiglass—all based on the artist’s crayon sketches. Strung on transparent filaments and suspended from hoops overhead, the multitude of pendants stream down, enveloping viewers in a shower of radiant pinks and metallic hues. 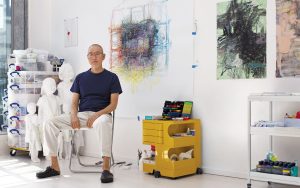 “This kind of immersion has some spiritual connection,” says Milhazes. She notes how the ethereal installation takes on a life of its own as viewers move through and around it, adding, “People feel very well under the piece.”

A version of this article first appeared in print in our 2022 Winter Issue under the headline “Full Bloom.” Subscribe to the magazine.