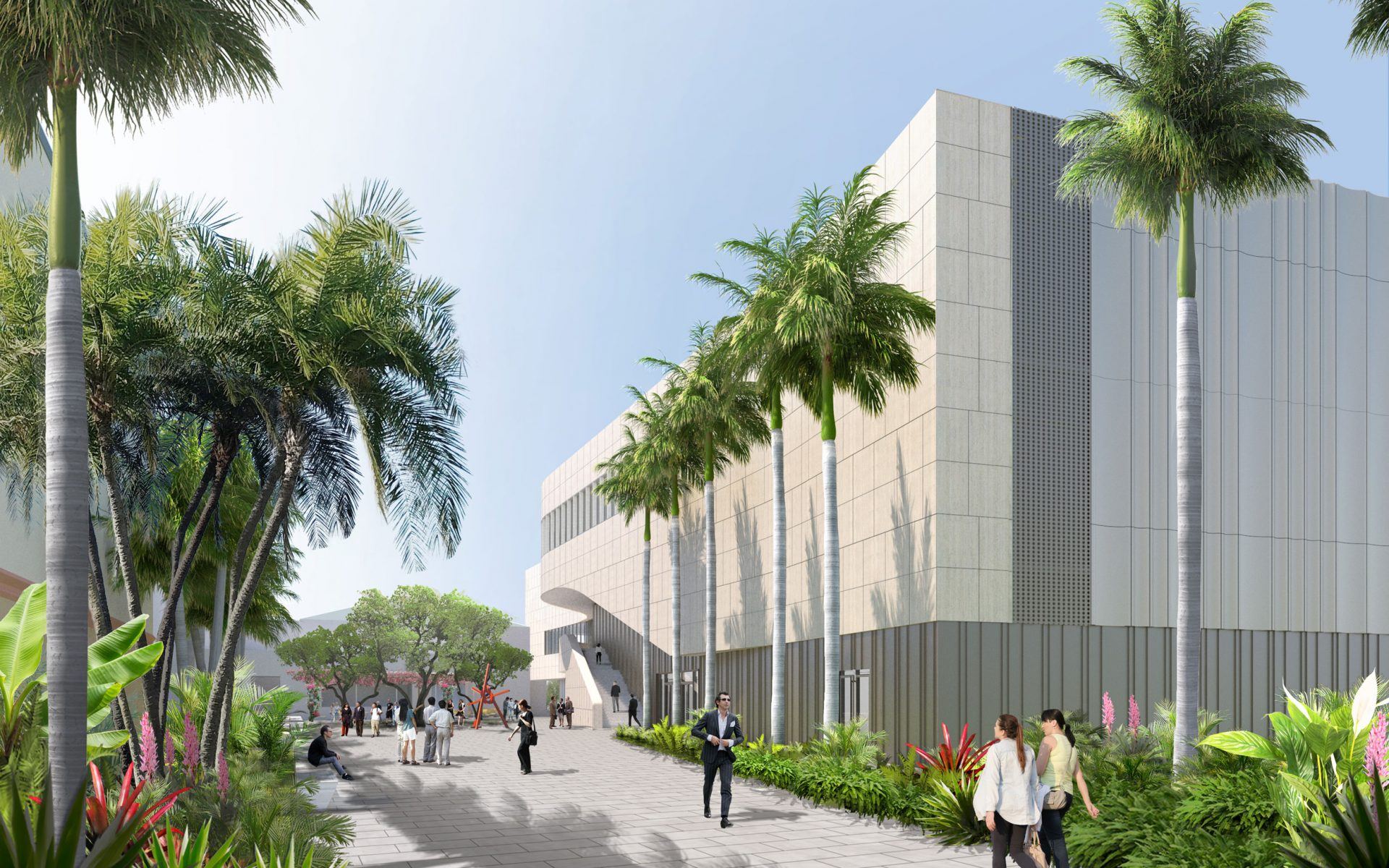 Demolishing the Figge Conservatory expands the courtyard open space while providing a welcoming entry into the museum and adjacent performance halls.
Photo: Weiss/Manfredi

Two years after the hurricane forced it to shutter, the Baker Museum is set to unveil a stunning revamp by Weiss/Manfredi

For two years the Baker Museum in southwest Florida has been shuttered since Hurricane Irma barreled across the Caribbean in late August 2017 at speeds topping 180 miles per hour causing upwards of $70 billion in damages.

In early December, the 19-year-old arts institution—founded as the Naples Museum of Art—will christen its new $25 million home designed by multidisciplinary design firm Weiss/Manfredi. Prior to the hurricane, the New York studio had been tapped to better integrate the Baker into the surrounding Artis-Naples cultural campus, which includes two performance halls, an education center, and the Naples Philharmonic. But in the wake of Irma’s devastation, firm principals Marion Weiss and Michael Manfredi (who are also married) devised a campus-wide redesign aimed at boosting the resiliency of the structures while improving public access to the art and programming. The grand stairway creates a sense of grandeur as patrons enter. The stairway focuses attention on the museum’s new lobby and draws visitors to the event space on the second level while providing garden views. Photo: Weiss/Manfredi

Among the most significant changes is the addition of the Norris Courtyard, which literally and figuratively replaces the Figge Conservatory as the heart of the complex. Lined with native flora, the gathering space provides a welcoming entry to the Baker and performance halls, as well as an outdoor staircase that leads to the second-floor balcony. Organized around a courtyard, new and renovated spaces for education, events, and performance define the heart of the Artis-Naples campus and the Baker Museum expansion, welcoming the surrounding community of Naples. Photo: Weiss/Manfredi

Art lovers will be pleased that there’s also 61 percent more exhibition space (45,000 square feet in total), thanks largely to a three-story addition that replaces a parking lot.

That extra breathing room will make it all the better to showcase the institution’s 35,000-piece trove of 20th- and 21st-century art, which will feature prominently in one of the four inaugural exhibitions. “The museum’s permanent collection has reached a significant level of maturity, reflecting the cultural vibrancy of our community and the knowledge of our local collectors,” chief curator Frank Verpoorten said in a statement. “With the doors of our museum reopening, it’s exciting to be able to show off these confidently collected works under a celebratory umbrella.” Visitors can enjoy viewing art over light refreshments and views of the waterfront. Photo: Weiss/Manfredi

Among the artists featured in “Iconic Works from the Permanent Collection” are Pablo Picasso, Roy Lichtenstein, Pat Steir, Alexander Calder, Louise Nevelson, and Diego Rivera. The other exhibitions slated to launch with the reopening are “Looking at Words: A Poetry of Shape,” “Monet to Matisse: French Masterworks from the Dixon Gallery and Gardens,” and “Color Field.” The south garden adjoins the south end of the multipurpose performance and learning center. The landscape features flora of southwest Florida, space for quiet contemplation, and sculpture. The garden is connected to the second level event space and the terrace via a stair. Photo: Weiss/Manfredi

“This achievement represents a remarkable coalescence of resilience, philanthropic support, and sincere appreciation for the arts,” said CEO and president Kathleen van Bergen in a statement. “We couldn’t be more thrilled to share these important exhibitions and reintroduce the Baker Museum as the cultural jewel it is to the community. We are so pleased to be once again operating with the full power of our multidisciplinary mission.”

Cover: Demolishing the Figge Conservatory expands the courtyard open space while providing a welcoming entry into the museum and adjacent performance halls.
Photo: Weiss/Manfredi
Next Post