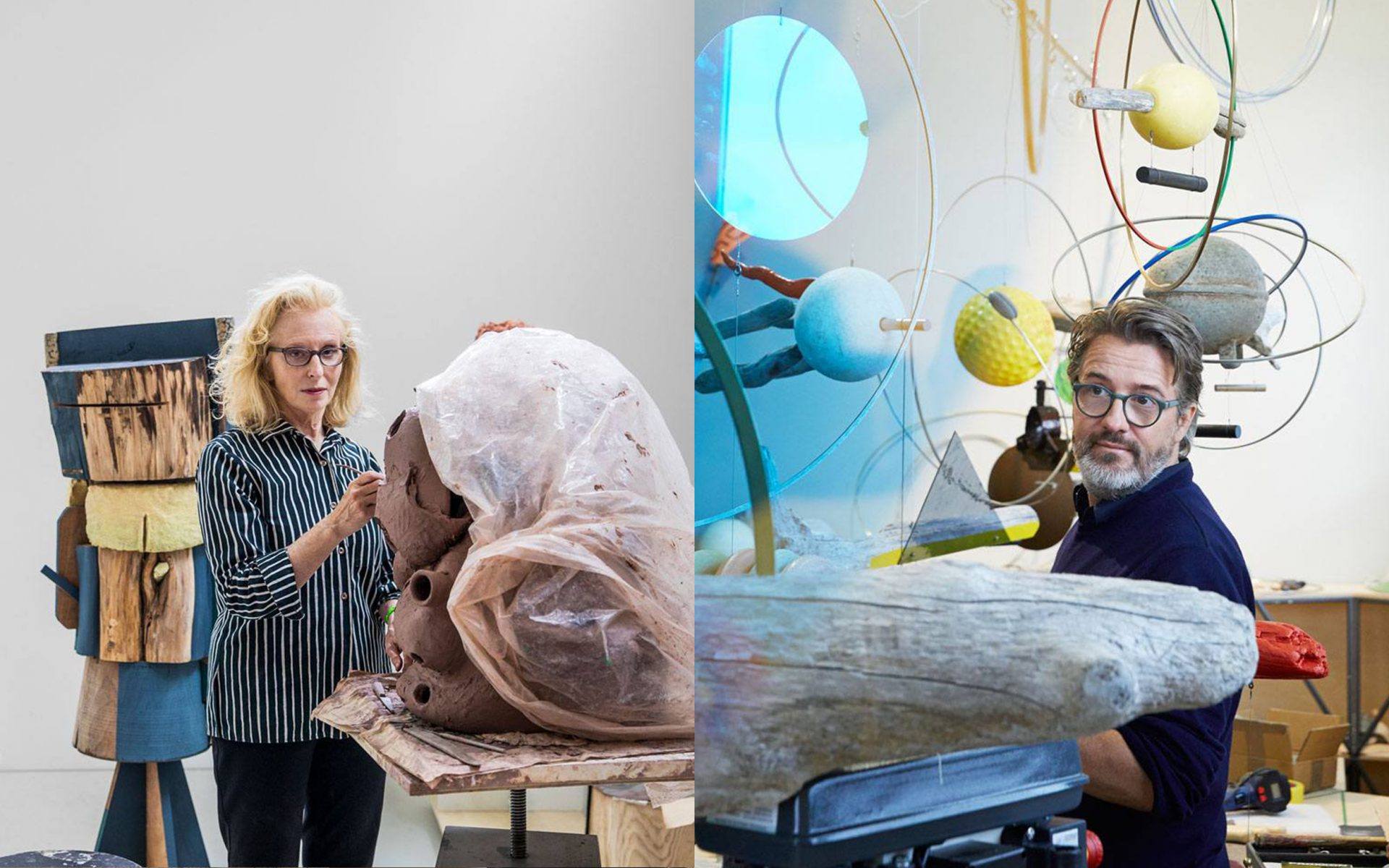 Art is a visual vocabulary. Like the well-worn adage says, an image is worth a thousand words. Artists think visually, communicating their ideas intuitively through symbols. The form, hue, and texture of a work can be used as a means of expression, allowing us to explore and challenge perceptions of reality. Conversely, how does the written word shape an artist’s awareness of the world? What are the books that are piled on their nightstands?

Here, we interviewed seven influential artists about books as inspiration, whether a current title or a piece of literature returned to time and again. Their recommendations span genres, from memoir and monograph to science fiction and philosophical treatise. Yet there is a common thread: Reading is integral to the creative process—and like one of Jeffrey Gibson’s beaded punching bags or Nick Cave’s shimmering “Soundsuits,” a book offers a new way of seeing. “This book is a favorite,” Jeffrey Gibson tells Galerie of A Very Easy Death, the title embroidered on one of his signature artworks. “It’s an intense, short autobiographical novel about Simone and her sister helping their mother as she’s passing from cancer.”

Gibson, a recent MacArthur “genius” recipient, is a Choctaw-Cherokee artist known for his own semiautobiographical artmaking, which draws on indigenous craft traditions. In Gibson’s most recognized series, he adorns Everlast punching bags with nylon fringe and intricate beadwork, a metaphor of frustration and resilience.

“Simone holds on to these grudges and resentments even in the moment of wanting to be intimately close with her mother,” he explains. “But as I get older, I realize that you benefit more from the kind of honesty and vulnerability of being in a complicated relationship, as opposed to ones that might seem easier.” “So many painters I know have read this biography because it’s so fundamental to a sense of an artist’s identity to their work and their world,” says Gina Beavers, who transforms Internet images into dense sculptural compositions.

“I find occasion to think about something from this book probably once a week,” Beavers says. “Whether I’m working with students, thinking about my own work, or thinking about art in relation to the world.” Loie Hollowell
A Fire upon the Deep (1992) by Vernor Vinge

“Quarantine is both a blessing and a curse,” says New York–based artist Loie Hollowell, who plays with primordial forms and light to create sensuous, abstract canvases. Last fall, her exhibition “Plumb Line” inaugurated Pace’s new headquarters and mined Hollowell’s relationship to pregnancy and childbirth. “I’m currently at home with my baby and husband, about to give birth to our second child next month and attempting to stay productive and creatively open in my home studio.”

Through this, Hollowell finds herself reading science fiction as voluntary escapism and recommends starting with A Fire upon the Deep, an epic space opera that bends notions of time, space, and sentience.

“I see Vinge’s books the same way I see hyperreal paintings,” Hollowell explains. “Impossible to ignore and completely mind melding in their construction.” Arlene Shechet
The Habit of Being (1988)by Flannery O’Connor

“These are letters written by Flannery O’Connor about her daily life,” describes multidisciplinary artist Arlene Shechet, whose public art has graced Madison Square Park’s grand lawn. “In graduate school, I started reading letters because I love simple, everyday words, everyday tasks and events by people who are so fabulously articulate and have such a clear vision. I wanted to pick that up again as we are all in this moment of paying attention to the everyday.”

“There’s a lot of comfort in O’Connor just writing to her mom or talking about her peacocks,” says Shechet. “Her Catholic background and being a Southern Gothic writer couldn’t be more different than my own. But I identify with making art and being creative outside of studio life.” Nick Cave. Photo: Portrait by Sandro, Courtesy of the artist

“The various Visionaire editions I’ve collected over the years have always been a source of inspiration and energy for me,” says Nick Cave of the luxe publications. Originally a kind of limited-edition magazine, they are now art objects with a cult following. Visionaire collaborators have included photographers, artists, and fashion houses, from Tom Ford and Andreas Gursky to John Baldessari and Louis Vuitton, which released a special limited-edition portfolio.

“I keep several Visionaire books on my library tables, and their various formats, materials, shapes, and collaborators remind me that there is no single way to see or make or respond,” explains Cave. “The production decisions and quality are always remarkable and are a presentation of the power of art and design.”

Olafur Eliasson
Down to Earth: Politics in the New Climatic Regime (2018) by Bruno Latour

“I have been inspired by Bruno Latour for some time,” says Danish-Icelandic Olafur Eliasson, whose monumental installations such as The Weather Project in Tate Modern’s Turbine Hall harness light, water, and temperature, blurring art and science. In 2018, Eliasson placed blocks of Greenland’s glacial ice across London, leaving them to melt as a call to arms.

“Latour is adamantly against silo thinking,” explains Eliasson of his book selection. “Instead, he looks at networks and interconnectivity, the kind of thought much needed today in the age of climate emergency and one that nurtures my artistic work.” Leonardo Drew in his studio. Photo: John Berens, Courtesy of the artist

Leonardo Drew
Monster of God: The Man-Eating Predator in the Jungles of History and the Mind (2003) by David Quammen

“Rarely am I asked what I am doing besides making art—how what I am reading creates my vision and outcome,” reflects artist Leonardo Drew, whose magnificently weathered sculptures are often mistaken for found objects rather than wood, rusted iron, and paper that have been carefully burned and corroded in his studio. Last summer, Drew’s first outdoor artwork, City in the Grass, an aluminum and colored sand “magic carpet,” delighted New Yorkers.

“I just finished Monster of God, which explores our relationship to predators,” says Drew. “It really puts things in perspective, how we as human beings worked our way from being prey. We feel superior to nature, like we don’t have to follow any ecological rules. But we’re actually not separate from nature at all.”