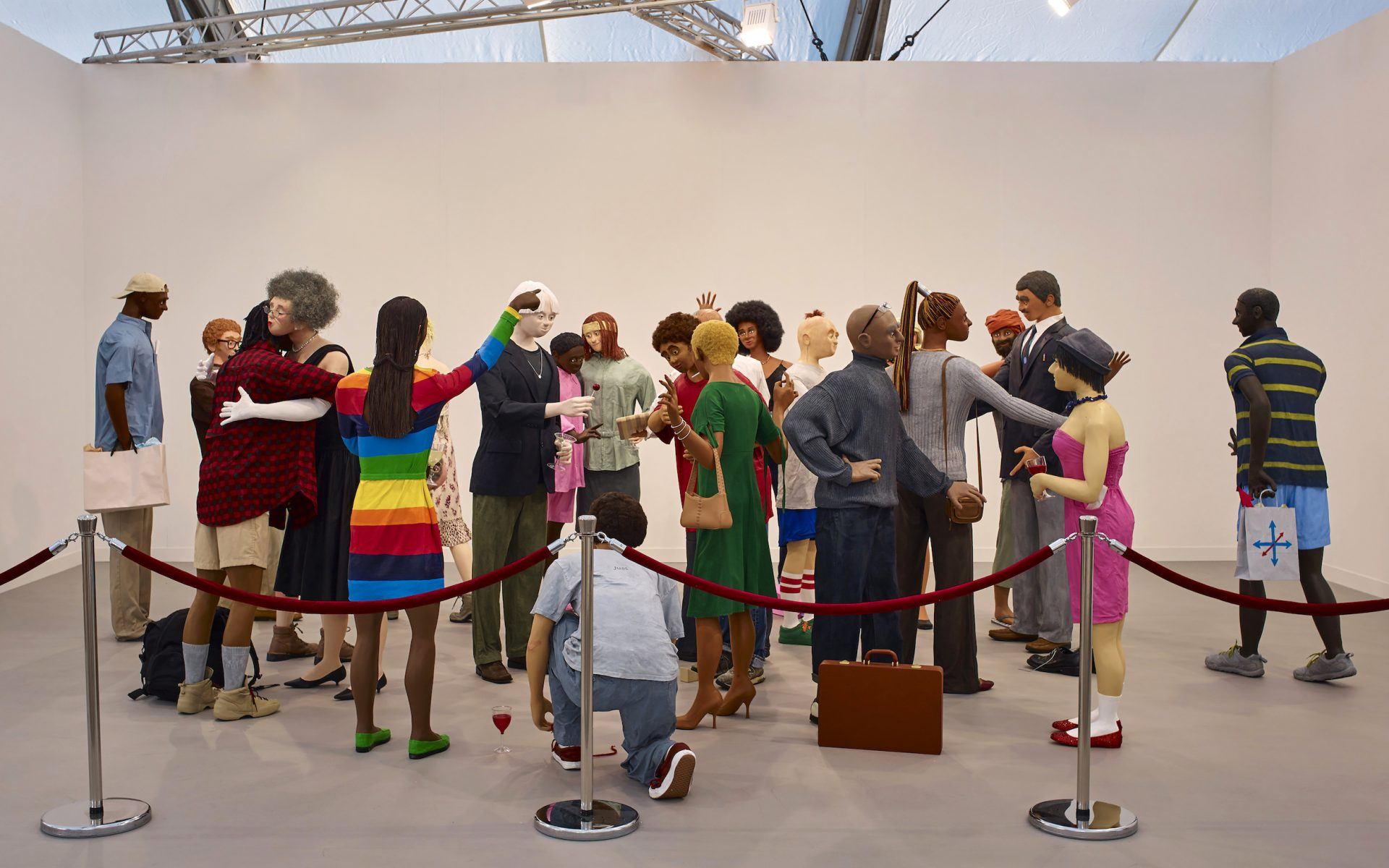 Dedicated to monumental, museum-worthy installations, videos, and paintings, the inaugural Meridians section is not to be missed

Art fairs need to continuously stay fresh, even Art Basel in Miami Beach, which has a reputation for being the art world’s favorite party. Looking to add a bit of zest to its exhibition program, this year the fair is inaugurating its new Meridians sector to present large-scale works and performances in the refurbished Miami Beach Convention Center’s 60,000 square-foot Grand Ballroom.

“From what I’ve observed in the past, the curatorial and museum crowd has gotten tired of coming to Miami for only booth presentations, but by bringing more of a curatorial edge to it, I’m hearing that curators are more excited to attend this year,” Ben Strauss-Malcolm, a director at Pace, which has two artists—Adam Pendleton and Fred Wilson—in the show, tells Galerie.

Presenting 34 large-scale sculptures, paintings, installations, performances, and film and video projections by an international group of established and emerging artists, the projects were chosen by a selection committee and have been organized by the show’s curator, Magalí Arriola, the director of Mexico City’s Museo Tamayo. With a focus on artists and works from the Americas—although its somewhat broader in this initial year because not as many galleries applied—the show addresses issue of race, gender and immigration, which are topics that are floating around the greater art world.

“Many of the works are content-loaded, which is an exciting part of it,” Arriola shared by phone from Miami, where she was already working on the installation. “I’m happy with the space and layout and the individual projects. I believe these bigger works give viewers a chance to grasp what’s behind the artists’ proposals. There are overarching themes that echo between the varied works, which makes the whole section quite compelling.” But being Art Basel, this doesn’t come cheaply. Similar to Unlimited at Art Basel in Basel, galleries are paying additional fees to participate in Meridians and have to ship and install these larger, often-complex artworks. “We’ve shipped a truckload of broken-down furniture, hippie dresses. scores of plastic objects and flowers, and old stuffed animals, which had to be fire-proofed, from the Catskills to Florida at great expense,” Wendy Osloff shared when discussing P.P.O.W’s presentation of a room-size installation by Portia Munson.

Galleries, however, need an adequate amount of space to show such large-scale works, which is beyond the capacity of a traditional booth. (Though most of the galleries exhibiting in this sector will have a work or two by their Meridians artists displayed there, too.) Art Basel’s reach brings in important institutional curators, who could potentially show the work, and international collectors, who have private museums they need to fill.

“It’s worth the costs to get your artists shown in this setting, especially in the inaugural year,” Thomas Kelly, a partner at Sean Kelly, which is presenting projects by Chi-Tsung Wu and Jose Dávila, reveals to Galerie. “I can’t think of a better circumstance than to present work in the first edition of Meridians. It’s going to garner a lot of attention and be the focal point of the fair.” A rising star sculptor on the West Coast art scene, Massachusetts-transplant Candice Lin makes found-object installations that address issues of exploitation and colonialism through processes of alchemy. Her 2019 piece La Charada China (Tobacco Version) spotlights the plight of the Chinese “coolie” laborers that were coerced to come to the Americas in 1800 for a better life and then brutally exploited. Lin places the figure of a person cut from dried tobacco leaves on a platform with an active distiller on his stomach. Various spices and commodities utilized during the slave trade surround the body. Distilling a mixture of water, sugar, tea, tobacco, poppy, and urine through networks of tubes, pumps and buckets, the liquid drips onto a sculptural mass of unfired clay, which will deteriorate over the course of the presentation. The powerful presentation, versions of which have been shown at the Hammer Museum in L.A. and at Ludlow 38 in New York, sets to right the wrong through a metaphoric transformation of matter.

Recommended: The Top Exhibitions, Fairs, and Pop-Ups to See in Miami Paying tribute to the late painter Craig Coleman, who performed in drag under the name Varla in South Beach during the early 1990s, Miami-based artist Pepe Mar created a site-specific installation that incorporates fliers and newspaper clippings about Coleman alongside his paintings and Mar’s mixed-media interpretations of his influence on the Miami art scene. Born in California, Coleman moved to New York in 1981 and showed at Lower East Side galleries with Jean-Michel Basquiat, Keith Haring, and Kenny Scharf before heading south in 1989 to join Miami’s fledgling art scene, where he painted, performed, filmed a camp TV show, and wrote a diaristic column for Wire magazine. After discovering Coleman’s self-portrait as Varla at a local thrift store, Mar contacted the artist’s friends in the LGBTQ community for the archival materials included in the installation and, in his characteristic collage-style of mixing found objects and cut-up imagery to convey an imaginative reflection of reality, contributed his own dazzling portrait of Coleman.

To create this sublime blue mountainous landscape, artist Chi-Tsung Wu employs age-old methods in the most innovative of ways, combining a 19th-century photographic printing process known as cyanotype together with the tradition of ancient Chinese landscape painting. To begin, Wu first coats chemically treated crumpled sheets of thin Xuan (rice) paper with an emulsion that turns the paper a deep blue after being exposed to light, before flattening them and collaging the hundreds of pieces onto linen canvas. With no predetermined design in mind, the artist constructs the imaginative scene, which simulates traditional Chinese mountain water (shan sui) paintings, as he goes—becoming a witness to the making of his work. Having a kind of tie-dye effect on the rice paper allows him to create the jagged rocks and snowy peaks and valleys that lend a modulated look to the layered landscape.

Recommended: The Best New Restaurants to Try in Miami During Art Basel Recreating a typical art gallery opening reception, Tom Friedman’s 2015 installation Cocktail Party constructs a cartoon version of the art world with his masterful handling of Styrofoam, clay and paint figures clothed and accessorized to resemble artists, gallerists, critics, and collectors. A lively array of 26 life-size characters greet one another, converse, and snap cell-phone photos while drinking champagne and scarfing down hor d’oeuvres behind a velvet rope. Sporting offbeat hairstyles and colorful outfits—humorously including a pair of painterly pants—the crowd carries on and the viewers, positioned as mere spectators, observe from afar with a fear of missing out on Friedman’s fun. Exhibited for the first time in the States, the work made its debut in 2015 at Frieze London, where it was reportedly being offered for one million pounds. The ironic installation seems destined to become an Instagram hit in Miami Beach, the art world’s favorite party town. Inspired by the 18th century Venetian artist Pietro Longhi’s cycle of paintings portraying the daily life of the haute bourgeoisie, Fred Wilson created 27 black glass panels in antique wood frames for his 2011 installation titled Sala Longhi. The monumental work features a white Murano glass sconce extending from the framed black glass at the center, flanked by double-stacked smaller works that mimic the subjects of Longhi’s canvases with clear circular and oval shapes. For this presentation, Wilson has crafted a new glass sculpture, For this presentation, Wilson has crafted a new sculpture, A Moth of Peace, which marks his first white chandelier. Referencing a line from Shakespeare’s Othello, the milky white glass, which is decorated with traditional floral and leaf shapes, is accented with hints of black, making it a perfect companion for the earlier work. A seminal sculptural installation from 1996 by artist Portia Munson, The Garden is a room-size accumulation of some 3,000 thrift shop and 99c store consumer items—including fake flowers, floral dresses, stuffed animals and old furniture. Replete with an archway entrance and flower-patterned fabric ceiling, the colorful work addresses feminist issues through the abundant use of pink objects, as well as climate change, thanks to the abundance of cheap plastic and nylon objects, which are petrochemical products and non-biodegradable. Flowery and pink, The Garden is suggestive of fertility and sexuality too, but too much of a good thing—and also a fake thing—begins to reveal an ominous feeling of oppression and death under the surface. Still, that shouldn’t detract the selfie-takers, which are automatically attracted to Munson’s giant pink pieces. Hopefully the security guard posted nearby will keep folks from jumping in and finding themselves, like in a fairytale, totally consumed by it.

An imaginative installation and performance art piece, Prouvost’s DEEP TRAVEL Ink stages a simulated Miami travel agency that supposedly belongs to her uncle—complete with a staff, a fully equipped office, an infomercial, and printed brochures. Actors occupy the desks cluttered with personal tchotchkes and computer screens in a fabricated bureau with maps, sculptures and paintings that are calibrated to take the visitor deeper into the promise and fantasy of a luxurious escape. After sampling Grand Ma’s tea, visitors are invited to view the artist’s seminal 2014 video How to Make Money Religiously, which is a delightful montage of art and and travel shots mixed with satirical texts that will leave you heading for the nearest airport to fulfill your own touristic dreams.

A major work from British artist Frank Bowling’s series of map paintings, his massive 1971 canvas Africa to Australia utilizes a map of the world as the ground for a colorful abstract canvas. Bowling, who was born in British Guyana in 1934 and currently lives and works in London and New York, first started working with maps when he had a studio at the Chelsea Hotel in the mid-1960s. Made by pouring and moving the paint around the canvas and then waiting days for it to dry before applying another layer, the artist considered his gestural action akin to “making the paint dance.” Initially exhibited in his 1971 solo show at the Whitney Museum of American Art, this painting has made its own journey before landing here at the fair, where the gallery hopes to find it a permanent home.

Art Basel Miami Beach is on view from December 4-8 (with a private view for VIPS on December 3) at the Miami Beach Convention Center.