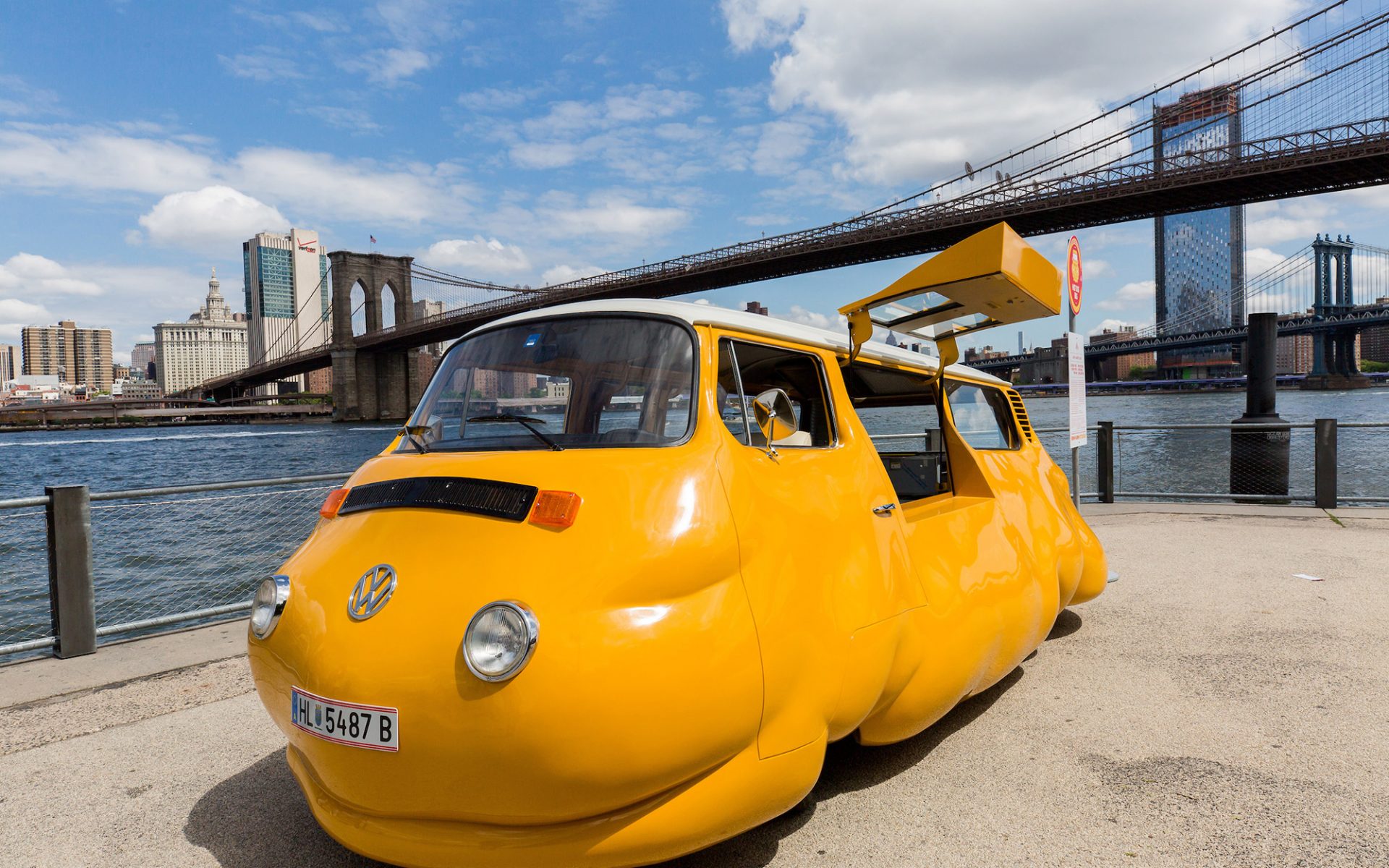 7 Incredible Public Artworks to See in New York This Summer

From Harlem to Hudson River Park, you can see work by major and emerging artists all over the city An installation view of Yayoi Kusama’s Narcissus Garden in the Rockaways Photo: Courtesy of MoMA PS1

At the 1966 Venice Biennale, a young Yayoi Kusama stood in a golden kimono surrounded by thousands of reflective plastic balls with a sign that stated: “Your Narcissism for Sale.” The balls were being offered for sale for $2 a piece. The guerilla project, which was promptly shut down, was a critique of the commercialization of contemporary art. Now, as part of the third iteration of the biennial festival Rockway!, the iconic work, titled “Narcissus Garden,” has been recreated in the carriage space in the former Fort Tilden Military Base at the Rockaways—the garage-turned-art-space that was one of many buildings in the area damaged by Hurricane Sandy in 2012.

The installation is organized in collaboration with MoMA PS1 and the Rockaway Artists Alliance. Since the original version of the work, the plastic balls have become stainless steel, and we’ve found them in ponds around the world—from Brazil’s Inhotim to France’s Le Domaine du Muy.

On view through September 3. We no longer need to travel to Nathan’s in Coney Island for a boardwalk hot dog this summer. Through August 26,  in a work commissioned by Public Art Fund, Austrian artist Erwin Wurm’s fattened-up mustard-yellow vintage Volkswagen Microbus offers free hot dogs to visitors. A plaque near the bus notes that this piece of public art “highlights how everyday consumption might grow into gluttony,” encouraging us to examine the connections between food, consumerism, and our bodies.

On view through August 26. One of Maren Hassinger’s sculptures in Harlem.

A grouping of curious birds-nest-like sculptures have appeared at 120th Street’s Marcus Garvey Park in Harlem, with branches bent and shaped into mounds, rings, and squares mimicking the park’s natural landscape and existing forms. The installation, which is commissioned by the Studio Museum, is a new work devised by the Harlem-based multidisciplinary artist Maren Hassinger and a team of industrious volunteers—mainly neighborhood residents and participants in the Studio Museum’s teen programs. It is just one of the many satellite projects the museum is behind while the new David Adjaye-designed museum is being constructed at 125th Street. (The new headquarters, which will replace the existing structure and increase overall square footage to an impressive 82,000 square feet, is due to open next year.) A magnificent 1930s-era historic fireboat has been brilliantly transformed by Tauba Auerbach into a contemporary version of a World War I “dazzle boat,” the camouflaged warships originally designed to confuse enemy submarines. Auerbach’s visually arresting version—her first U.S. commission—features fluid red and white swirls that envelop the entire vessel. Visitors can take free, timed rides around the southern tip of Manhattan, past the Statue of Liberty, and across to Brooklyn Bridge Park, where it is moored. The project marks the 100th anniversary year of the end of World War I, and was co-commissioned by 14-18 Now, an arts program that commissions art related to the First World War. Jacob Hashimoto’s ‘The Eclipse’ is made of thousands of delicate rice paper kites. Photo: Timothy Schenck

A cloud-like grouping of intricately crafted black and white rice-paper kites make up Jacob Hashimoto’s monumental installation in the St. Cornelius Chapel on Governors Island. Titled the Eclipse, a version of the work was initially shown at the Palazzo Flangini at the Venice Biennale in 2017. A second work, Never Comes Tomorrow, is located in the nearby archway of Liggett Hall, and made from wooden cubes and steel funnels.  Be sure to stop by the new dining hot spot the Island Oyster for fish tacos or a lobster roll while you’re there.

On view through October 1. For this series of brightly colored aluminum canoes installed at the shoreline of the East River in Queens, New York-based artist Xaviera Simmons has drawn on the colors and abstract designs of the national flags from the immigrant communities in the diverse areas of Astoria and Long Island City. The canoe is also symbolic of the journeys of migration, and the historic reliance on boats to seek another life.

On view through August 19. For her first public commission in the U.S., British artist Phyllida Barlow’s  prop, consists of massive concrete panels and planks set along the elevated walkway of the High Line. Overlooking the corner of Tenth Avenue and 16th Street, the work—a reimagining of an installation created for the British Pavilion at the 2017 Venice Biennale—can be viewed from several vantage points.