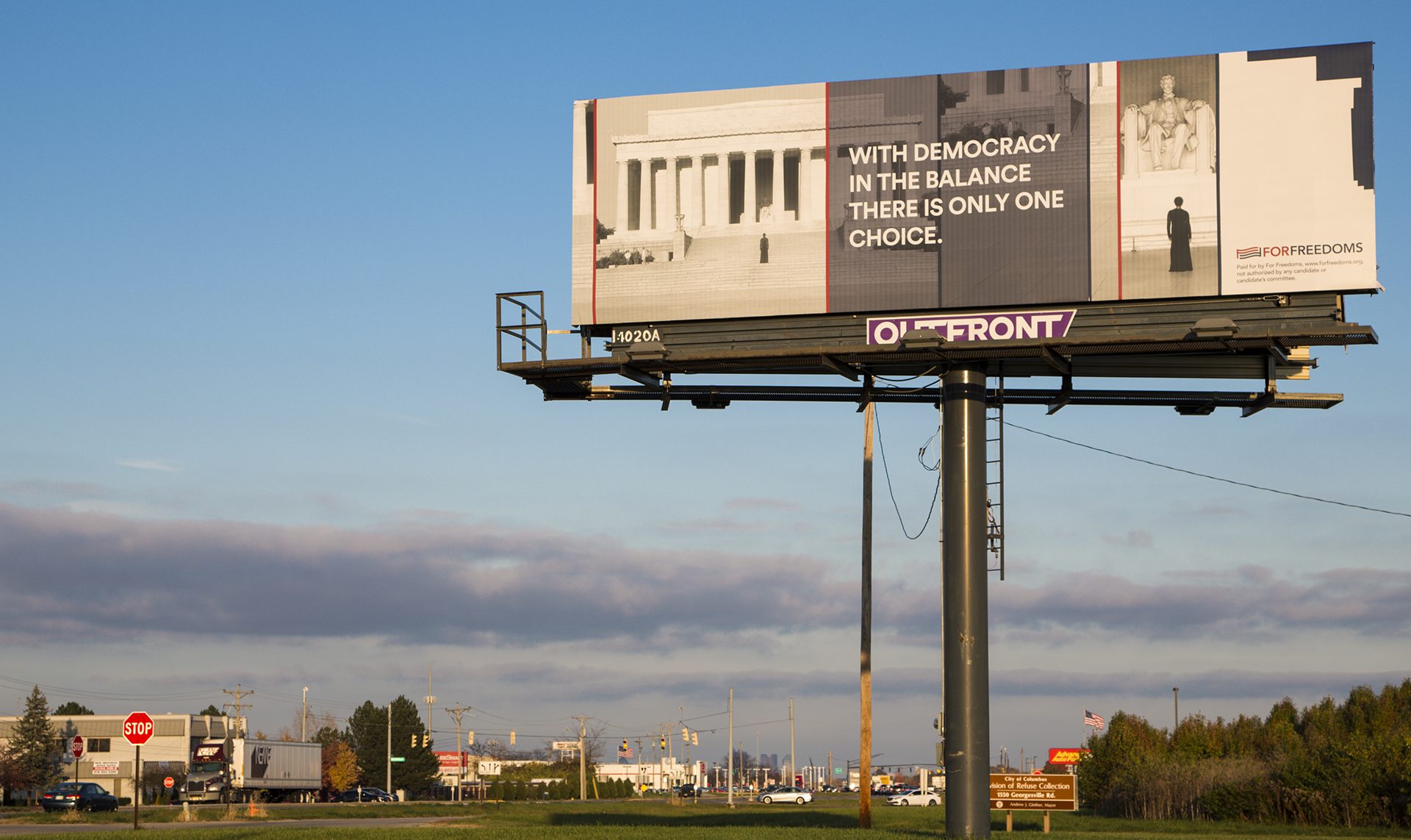 From Francisco Goya and Pablo Picasso to Banksy, artists have long created politically-engaged works that respond to the tumultuous events of their day. This summer and fall, contemporary artists will join this tradition in a series of new works in a public art project that will see billboards erected across the country and artists leading town-hall events.

The artist-run organization For Freedoms is enlisting some of the biggest names in contemporary art, including Carrie Mae Weems, Trevor Paglen, Zoe Buckman and Theaster Gates in support of an effort to create public works that inspire political discourse and action ahead of the midterm elections. An artist-designed billboard reading “Us is Them”, part of a 2016 For Freedoms campaign, overlooks a New Orleans parking lot. Photo: For Freedoms / Wyatt Gallery

Called the 50 State Initiative, the heart of the project is a campaign to fund the creation of billboards across the country through 52 separate Kickstarter campaigns, one for each state, as well as DC and Puerto Rico, each with a $3000 goal.

“Art is a language,” artist Paula Crown, who is among the 175 artists participating in the initiative, told Galerie in a phone interview. “I express my emotions, uncertainty, and feelings best through ideating and making art. Viewers expand the conversation when they view and respond to my work.”

Starting a conversation and engaging the public is not always easy. But it’s just what the founders of the organization had in mind.

A 2016 For Freedoms billboard states “Not Voting is Actually Voting” near a highway in Flint, MI. Photo: For Freedoms / Wyatt Gallery

“We believe in art, and artists, and the conversations they create,” said Guggenheim Fellow Hank Willis Thomas who is a co-founder of For Freedoms with Creative Capital artist Eric Gottesman.

Founded in 2016 as an artist-run Super PAC, and inspired by Franklin D. Roosevelt’s 1941 “Four Freedoms” address, For Freedoms aims to combat the influence of big money donors on politicians by raising funds to allow for a variety of voices to be heard. The funding for the 50 State Initiative is not derived from the Super PAC.

Politically neutral, the billboards won’t support specific candidates, but rather challenge voters to gain a deeper understanding of today’s controversies, and then to use their vote thoughtfully.

The deadline for the Kickstarter campaigns to create the artist-designed billboards is July 3.