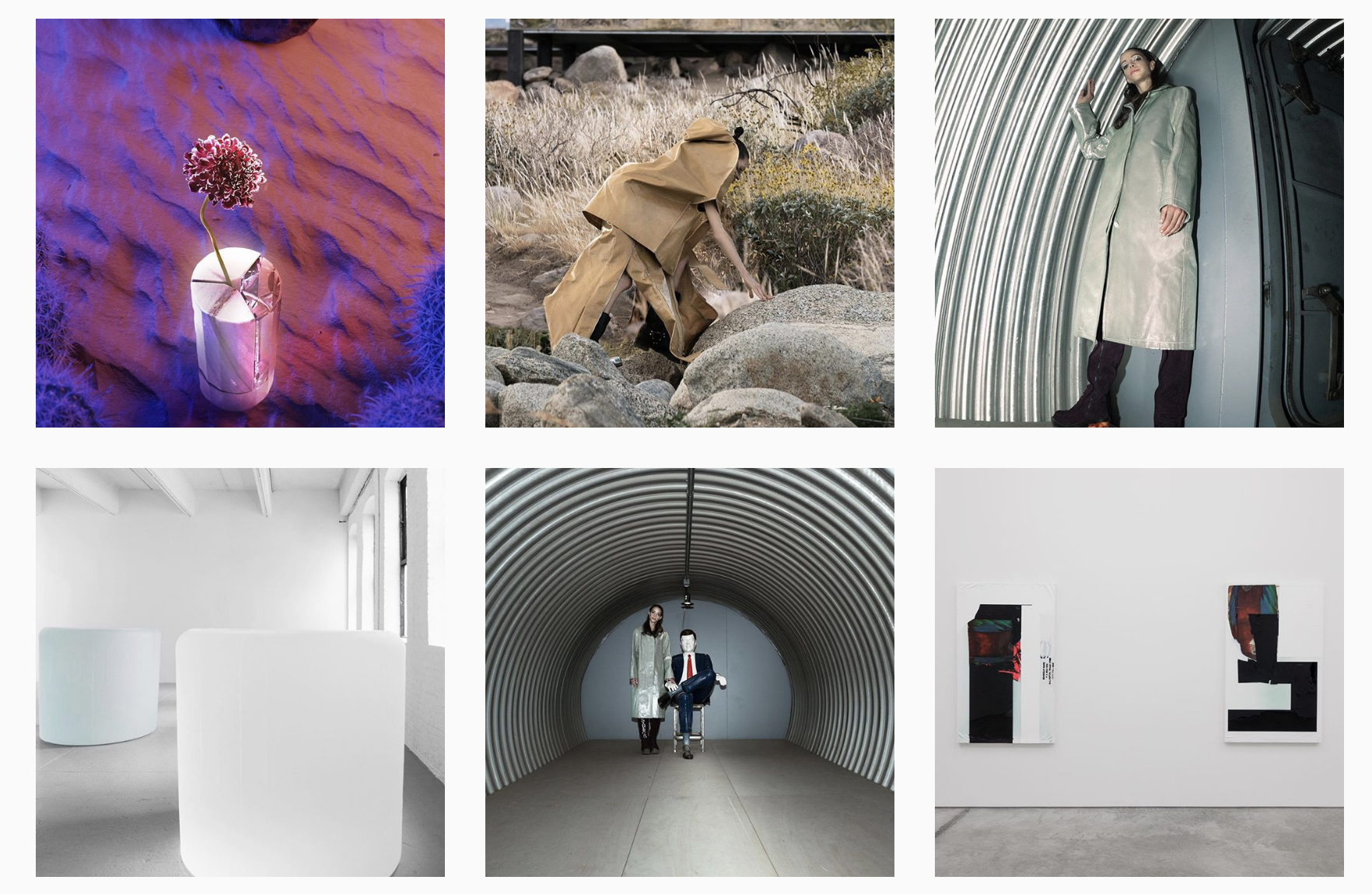 A screenshot of the style maven @paridust's Instagram, a masterful blend of fashion and art
Photo: Instagram

From globe-trotting curators to established art dealers, these accounts are guaranteed to keep you updated on art world happenings and provide inspiration in spades

Instagram is a wonderland of visual information, teeming with both professional photographers and amateur shutterbugs. To help navigate the addictive and oft-overwhelming app, we have compiled a list of contemporary art accounts worth following; each is a major figure or institution in the art world—and in most cases boasts an impressive number of followers. Take globe-trotting curators such as Hans-Ulrich Obrist and Jens Hoffman, for instance, who enlighten with candid exhibition photos and artist quotes. Art critic Jerry Saltz, meanwhile, offers a conceptual ride through archived paintings and photographs, plus a high dose of politically and sexually charged satire. Who will be your favorite?

Founded by RoseLee Goldberg in 2004, an institution in its own right, will be launching Performa 17, their performance biennial, this November. Follow their account for updates of what’s to come in various locations throughout New York City.

Beckett's play, "Endgame," revisited by first Performa Digital alum #TaniaBruguera with stunning set design at @Kunstenfestivaldesarts; a powerful and urgent account of a world nearing to its end. ? curator @Charles_Aubin

The senior art critic of New York magazine has made a name for himself through the written word, but his Instagram account launched him into celebrity status. Featuring art with both a political and sexualized leaning, the page is both informative and amusing—and guaranteed to be a conversation starter.

You know 10s of thousands of bathroom-selfies? Here's gold standard: Vivian Maier; 1926-2009; Artist discovered posthumously. From @womensart on Twitter; I'd follow this Twitter. ⚡️⚡️⚡️ Always wanted to do called "Bathroom Selfies; Falling in Love with Ourselves in the Bathroom Mirror ". What are all you thinking in there?????? (Bathroom). The genre is 90% female. What gives?

Pari Ehsan has emerged over the last few years as a major force in the virtual land of Instagram. A style maven with an architectural background, Ehsan uses her own body to blur the lines between fashion and art.

Where's Dusty ? finding beauty in the unknown @dougaitkenworkshop @hoodbyair where does one thing end & the other begin @_desertx mirage ?

Celebrating their 40th anniversary, Public Art Fund is an invaluable resource that brings art to public space in New York City and beyond. Recent projects include Anish Kapoor’s Descension on view at Brooklyn Bridge Park through September 10, and Katja Novitskova’s installations at City Hall Park. A citywide project with Ai Weiwei is coming up in the Fall.

The former longtime director of postwar and contemporary art at Christie’s and now partner of Lévy Gorvy gallery actively posts images of contemporary art linked with poetic nuances. He utilizes quotes from various sources and subjects, from Jean-Paul Sartre to Sylvia Plath, and occasionally those attributed to the artist featured.

– "It was green, the silence; the light was moist; the month of June trembled like a butterfly; and you, Matilde, passed through noon, through the regions of the South, the sea, and the stones. – – You were carrying your cargo of iron flowers, seaweed battered and abandoned by the South wind, but your hands, still white, cracked by corrosive salt, gathered the blooming stalks that grew in the sand. – – I love your pure gifts, your skin like whole stones, your nails, offerings, in the suns of your fingers, your mouth brimming with all joys. Oh, in my house beside the abyss, give me the tormenting structure of that silence, pavilion of the sea, forgotten in the sand." – – – PABLO NERUDA, 'XL from One Hundred Love Sonnets' – – – DAVID HOCKNEY, 'Pool and Steps, Le Nid du Duc', 1971. Private Collection. Direct from its public and critical acclaim at the Tate Britain in London, the traveling David Hockney retrospective opened yesterday in Paris at the Pompidou. This 'Pool' picture has always been a favorite – with his lover's sandals and abandoned towel declaring a palpable presence through his absence that is both soulfully melancholic and enigmatic. This is a breakup picture painted in the aftermath of Hockney's important relationship with his long time partner and Californian muse Peter Schlesinger, which had just ended – as a result, Hockney found solace in his work, completing seven pictures in two months. There is a loneliness despite the beauty of his sun drenched Mediterranean location. Hockney shows himself to be a consummate painter and he achieves a lusciousness in his watery blues and greens that reminds me of the thin veils of impregnated color by Morris Louis and the American Color Field painters, who he admired. – – #poolside #davidhockney #afterthesplash @centrepompidou #pabloneruda #lovepoems #sunlightandshadows #summerlovin #besidetheabyss #poemfortheday – Photo: @paulemmanuelreiffers

Earlier this year, Hockley was appointed an assistant curator position at the Whitney Museum of American Art. Previously in a similar role at the Brooklyn Museum, there has been a lot of buzz about her presence at the Whitney, and her Instagram is a great place to stay updated on her activities.

get hype for 'calder: hypermobility,' opening @whitneymuseum june 9, and a room full of stunners like 'blizzard (roxbury flurry)' (1946)! ??⭐️ | "'Calder: Hypermobility' focuses on the extraordinary breadth of movement and sound in the work of #AlexanderCalder. This exhibition brings together a rich constellation of key sculptures and provides a rare opportunity to experience the works as the artist intended—in motion. Regular activations will occur in the galleries, revealing the inherent kinetic nature of Calder’s work, as well as its relationship to performance. Influenced in part by the artist’s fascination and engagement with choreography, Calder’s sculptures contain an embedded performativity that is reflected in their idiosyncratic motions and the perceptual responses they provoke."

The curator and artistic director of the Serpentine Galleries, London, Obrist has his finger on the pulse of the art world. His Instagram account is made up of handwritten notes and drawings by artists and art-world luminaries on everything from Post-Its to napkins. The series is slated for upcoming publication.

The director of the High Line, Alemani curated the Italian Pavilion in the current 57th Biennale di Venezia, and is responsible for Frieze Projects at Frieze, New York. She tends to focus on performance and sculpture, and her account is a delightful mix of both, along with the occasional picture of her son with longtime partner and curator at the New Museum, Massimiliano Gioni.

The social media manager at the Metropolitan Museum of Art and founder of the Tumblr blog Black Contemporary Art has a unique voice and vision around black art and artists, as well as queer culture. Her Instagram account offers a peek into her life, but it’s also a highly-curated space, showing wants viewers what to see through purpose all her own. The page is fun, fashionable, and didactic.

there are SO many more women on view here than there were during my last visit. kudos to jessica morgan and @diaartfoundation. the work continues… // @thombrowneny