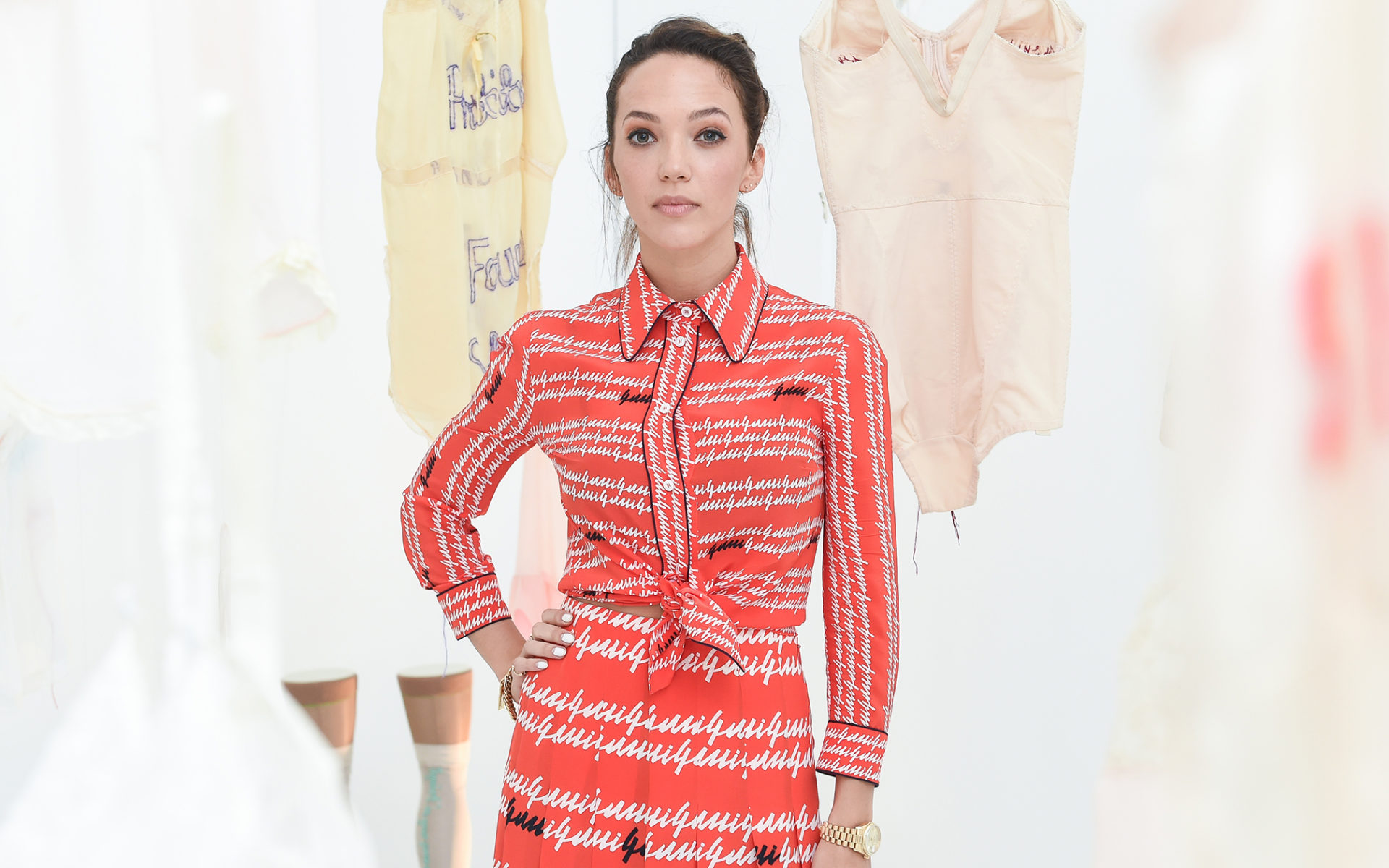 Champ, 2016, from the series “Mostly It’s Just Uncomfortable.” Photo: Courtesy of the artist

“I just saw the energy of this glowing white uterus and ovaries as boxing gloves,” the British artist and feminist activist Zoe Buckman explains to Galerie, describing how she conceived Champ, a white fluorescent sculpture of female reproductive organs. “Then it was like, ‘I gotta make that happen.’” And in 2015, in her Manhattan studio, Buckman did just that. Now, beginning February 27, her ode to female empowerment and protest will become a monumental 43-foot installation at the intersection of Sunset Boulevard and Sweetzer Avenue, in West Hollywood, California.

The public installation of Champ, which was commissioned by the Art Production Fund, comes at a time when women in Hollywood—and across America—are speaking up in the wake of sexual harassment allegations, prompted by the viral #MeToo protest movement and nationwide Women’s Marches. Before the work is unveiled to the public, Galerie sat down with Buckman to discuss what she hopes Champ achieves in the current movement to empower women and protect them from sexual harassment. Champion, 2015, from the same series. Photo: Courtesy of the artist

Antwaun Sargent: What inspired the creation of Champ?

Zoe Buckman: I’ve been through quite a lot of gyno-anesthetic procedures, and it was a way for me to work through my negative associations with sexual healthcare. It was a way of me flipping something that I deemed difficult and turning it into something beautiful. It was created in the run up to the 2016 election, and it also was me responding to what was going on politically. That’s really why I started working on “Mostly It’s Just Uncomfortable,” a series of powder-coating gyno instruments.

At the same time as I was beginning that series, I was also getting into boxing. I was in my studio making this work about the fact that I felt personally that we were in a place where we needed to fight, that we were under attack, that was a war on women. Then I was going four times a week to this environment that is very masculine and very testosterone-heavy and learning how to hold my own in that space. It just sort of made sense to me that my life would start to come into my studio and into this body of work. AS: What does it mean for you that Champ will become a public sculpture in light of what seems to be the birth of a new women’s movement?

ZB: One of the things I’m really excited about is contributing to the discourse of the city. I think about the little kids, girls and boys, who will pass it on their way to school and what questions it might spark within their family. This could be the first time that a boy sees a uterus and wants to know what it is, and he might ask his parents “What is that thing?”

I’m excited about it just merely as a platform for education, because if we’ve learned anything from what lots of these politicians say about women, it’s that there has been a real abandonment of science and biology and an understanding of the female body and how it works. Also, as a public art, Champ will become a symbol of empowerment and resilience for women. That’s really exciting to me.

AS: Last year you unveiled the mural, We Hold These Truths To Be Self-Evident, exploring the language politicians have used to describe women. Why has it been important for your to explore not just feminism but also how masculinity informs perceptions of femininity?

ZB:  feel that almost everything I make explores some kind of intersection between what we deem feminine and what we deem masculine. With Champ, you’ve obviously got this uterus, which is incredibly female-centric, organic shape, but then you’ve got these boxing gloves, which we associate with masculinity, particularly in art. I guess one of the comments that I’m trying to make about feminism as a political movement is that it cannot exist successfully as an inclusive movement if we don’t engage men. It has to be intersectional. It has to engage everyone, and men are a huge part of the conversation. Wakeful Anguish from the series “Let Her Rave,” 2017. Photo: Courtesy of the artist

I guess one of my fears for the “Me, Too” movement is how men have been ostracized from the conversation. I think it’s a mistake, and that’s one of the things that I’m excited about how the piece will be received by the public; it has the potential to bring men into the conversation. We Hold These Truths To Be Self-Evident is about the language being a vital in shaping public consensus. I think that the words that we use end up defining us or we use them to define others. I think we all need to be held accountable for our use of language. So the context of language is something that I keep on coming back to in my work.

AS: What do you want to see come out of these conversations around sexual harassment and women’s rights?

ZB: In art and entertainment and life even, I want to see women in more empowered positions, and I want more of an emphasis on authentic female experiences. You know, what is a real woman’s life like? Show the difficult challenges that we face like abortion, periods, birth, and show our sexuality and our sexual appetite. All of these things I think have been sort of swept under the carpet in all facets of our society. AS: Given this cultural moment, what will make Champ a successful public work for you?

Cover: Zoe Buckman.
Photo: Courtesy of the artist
Next Post