“I’m a good client for an architect, because I want them to have the chance to create something pure and radical,” says French artist Xavier Veilhan from his Paris studio—in the 20th arrondissement, not far from Père-Lachaise cemetery—where the floors are polished concrete, walls are made of bent plywood, and a stunning curved ceiling has been created in concrete. “I think we got through 20 tons of concrete in all,” he says of the renovation he completed 15 years ago with the architects Philippe Bona and Elisabeth Lemercier.

Cast-aluminum stairs, which look like folded sheet metal, lead to the first floor, with banisters made from colorful nylon straps. There are shelves designed by Bona and Lemercier, and he points out a stainless-steel drinking fountain. “It’s a sculpture by another friend,” he says, referring to American artist Marc Ganzglass. 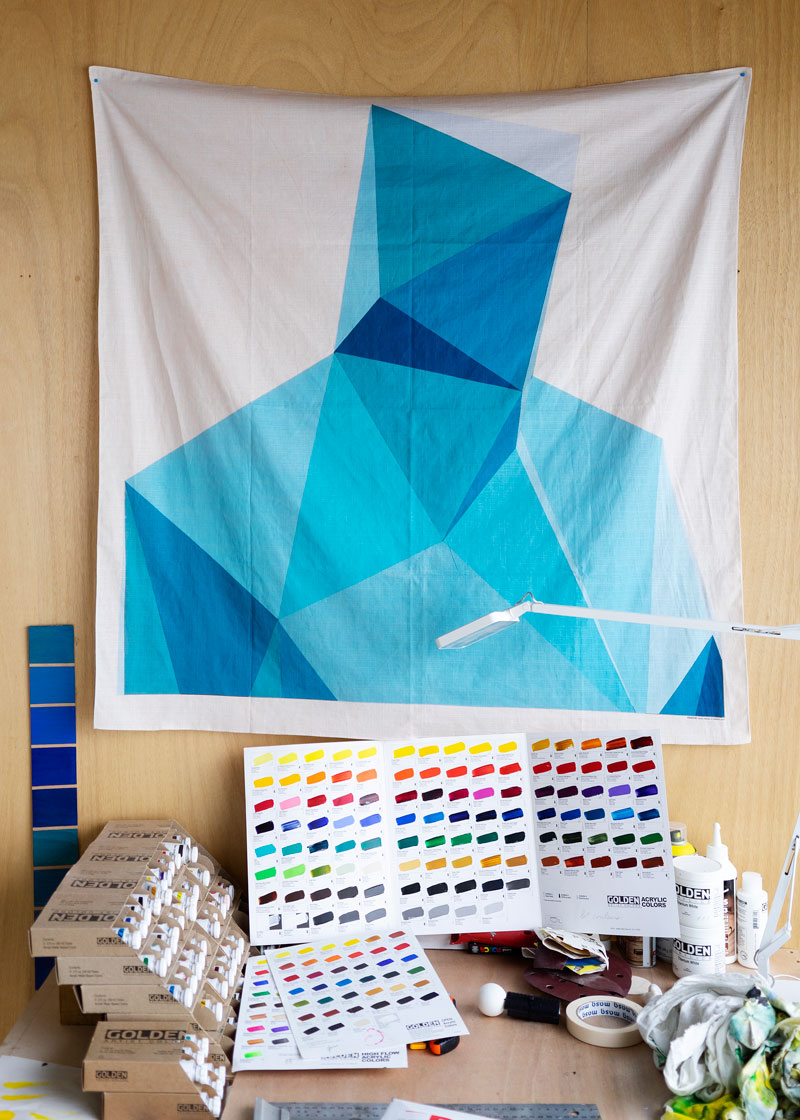 In front of Veilhan on a curving desk are models and drawings of his latest works, many now on view at Perrotin gallery in New York, through December 23. “They are moving toward something more human,” Veilhan says of the resulting figures, which are cast in concrete and finished in a soft matte varnish in white, beige, or black. They are readable as people but indistinctly, their features smoothed into abstraction. “I call them ‘Blur’ sculptures,” the artist says. “I’m interested in the presence of the body and its interaction with the environment, like the way you see someone passing on the street.” The ghostly beings seem dimmed down, vestigial, in contrast to the bold faceted forms in eye-popping monochrome for which he is best known. 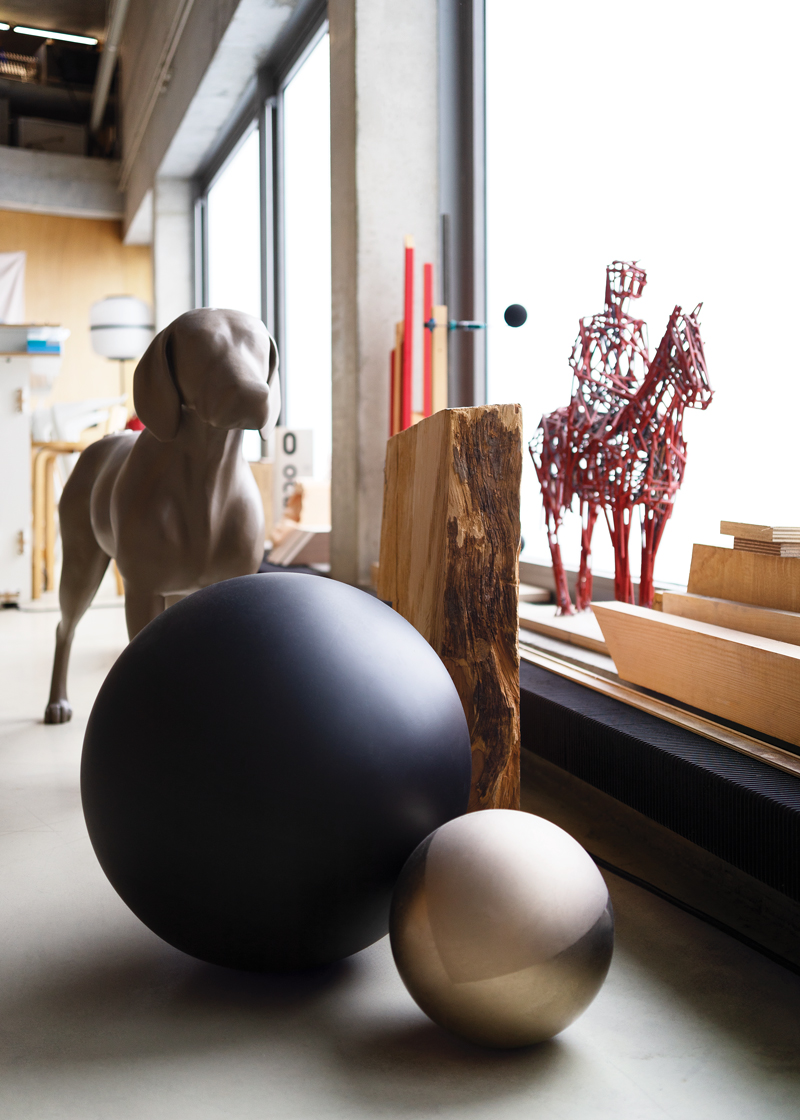 Prototypes for various projects are displayed throughout his studio. The dog is from a series of canine sculptures he created in 2019, and the horse and rider work is from 2002. Photo: Claire Dorn

Veilhan’s practice encompasses much more than sculpture, spanning everything from photography and filmmaking to scenography and painting, and he has never been one to work in isolation, employing a team of three full-timers and a handful of freelancers and interns. “It’s all about collaboration,” he says. “I pretend there’s no pyramid, there’s no top. I know which way I want to go, but I like to think I’m not driving the bus.”

At lunchtime, however, he is quite literally le chef, cooking meals with market-fresh ingredients in the studio’s kitchen, designed as a flexible space that can be converted to a work area as needed. Plywood units are topped with protective silicone surfaces in a vibrant pink. Dishes are rinsed in a sink made of varnished neon yellow resin. 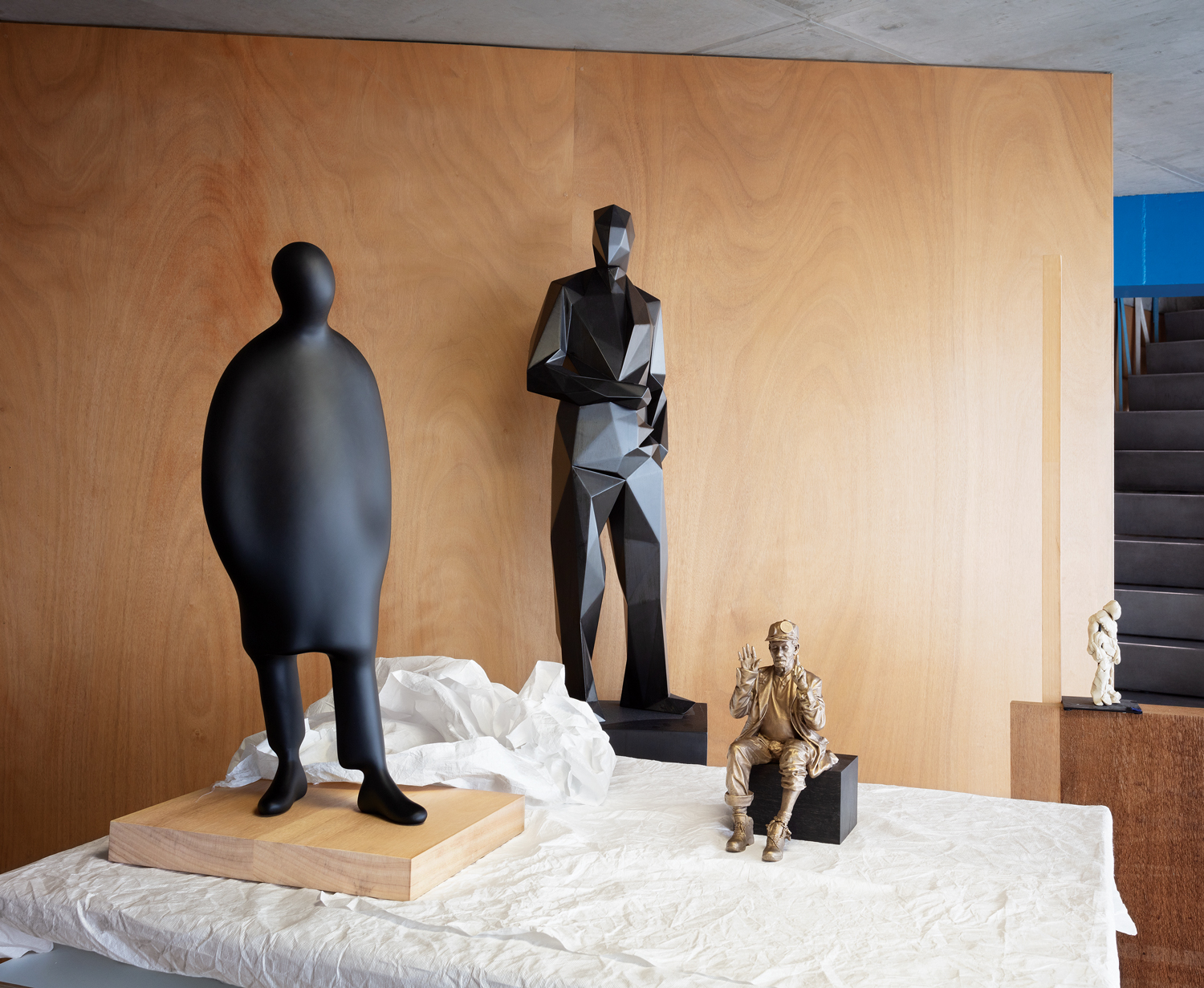 One of Veilhan’s new “Blur“ works, David n°1, stands next to a 2014 sculpture of the architect Le Corbusier and a likeness of the music producer and singer Lee “Scratch” Perry. Photo: Claire Dorn

Veilhan became a successful artist straight out of art school. By 1990 he was staging ambitious group shows featuring work by friends such as Pierre Huyghe and Dominique Gonzalez-Foerster. By the early 2000s he was becoming known for supersize outdoor works. In 2009, he installed a series of sculptures on the grounds of Versailles, most memorably a Futurist-like carriage and horses in vivid purple in the forecourt. Last year, a pair of giants took up permanent residence in two parks in Vårberg, near Stockholm; the 60-foot-long man and the nearly 10-foot-tall bust of a woman—both in faceted blue concrete—are intended to be integral to their surroundings, used as benches or picnic tables or trysting spots for lovers. 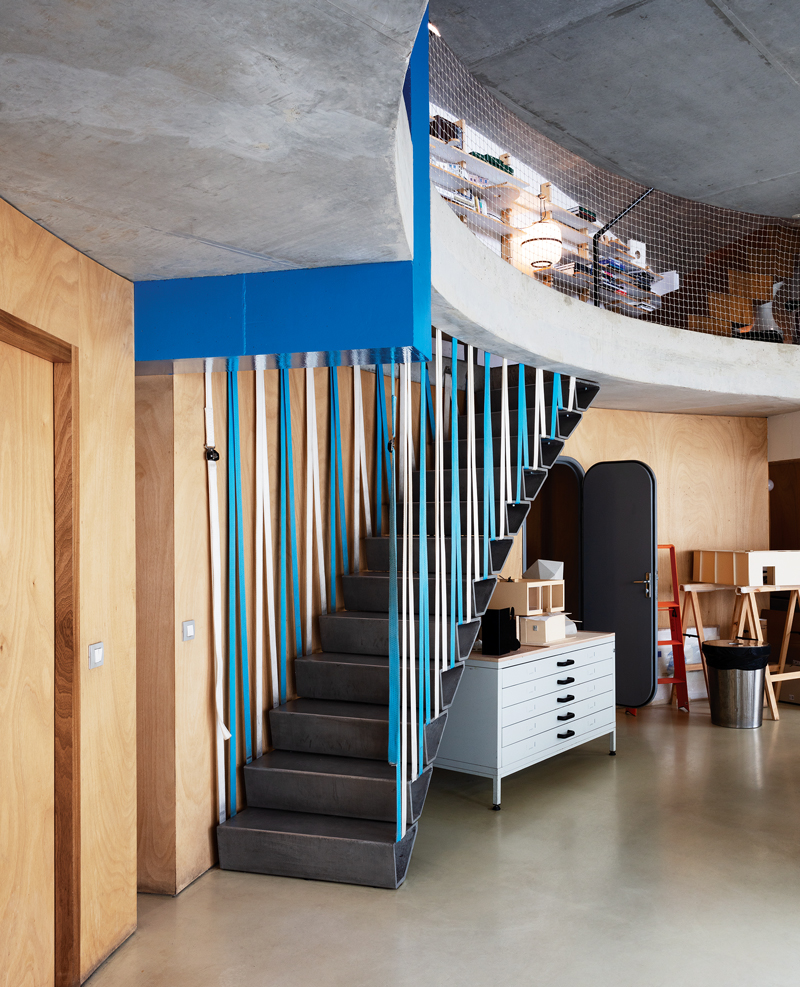 It was in 2017, when Veilhan represented France at the Venice Biennale, that his reputation hit a new high. Eschewing the art forms more typically seen at the biennial, Veilhan (along with the Swiss American artist and composer Christian Marclay and art critic Lionel Bovier, who both served as the exhibition’s curators) transformed the entire pavilion into a fully functioning recording studio and invited musicians, including Sébastien Tellier and Lee “Scratch” Perry, to drop by to perform and record in its Merzbau-inspired, plywood-lined interior. “It was like an environmental sculpture,” says Veilhan, who has created sculptures of musicians (including Perry) and music industry legends. “But it was also about making a space for fragile moments of creativity, and one which would be active and surprising for the whole run of the biennial.”

Veilhan sits next to a shelving system and an arching window that were designed by architects Philippe Bona and Elisabeth Lemercier. Photo: Claire Dorn

Veilhan’s interest in space and architecture has been a consistent thread throughout his career. In 2012, he occupied Richard Neutra’s VDL House in Los Angeles with his wife and children as part of a series called “Architectones,” in which he makes contextually driven work. In that case, he installed mobiles composed of large reflective spheres that mirrored the house back at itself and planted a heroically scaled silhouette of Neutra’s profile, laser-cut from aluminum and painted black, out front. 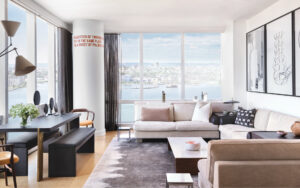 Veilhan has also situated large sculptures of Le Corbusier atop the Cité Radieuse, his iconic Marseille housing complex, and of Richard Rogers and Renzo Piano outside their famous collaboration, the Centre Pompidou in Paris. “It’s probably the most important building ever made,” the artist says of the museum. “It was a shock, and it’s not nice perhaps. But like the first time you hear Prince, you don’t necessarily like it, but you can’t stay away from it.” Unlike Veilhan himself, who welcomes us all in.

A version of this article first appeared in print in our 2021 Winter Issue under the headline “Smooth Operator.” Subscribe to the magazine.