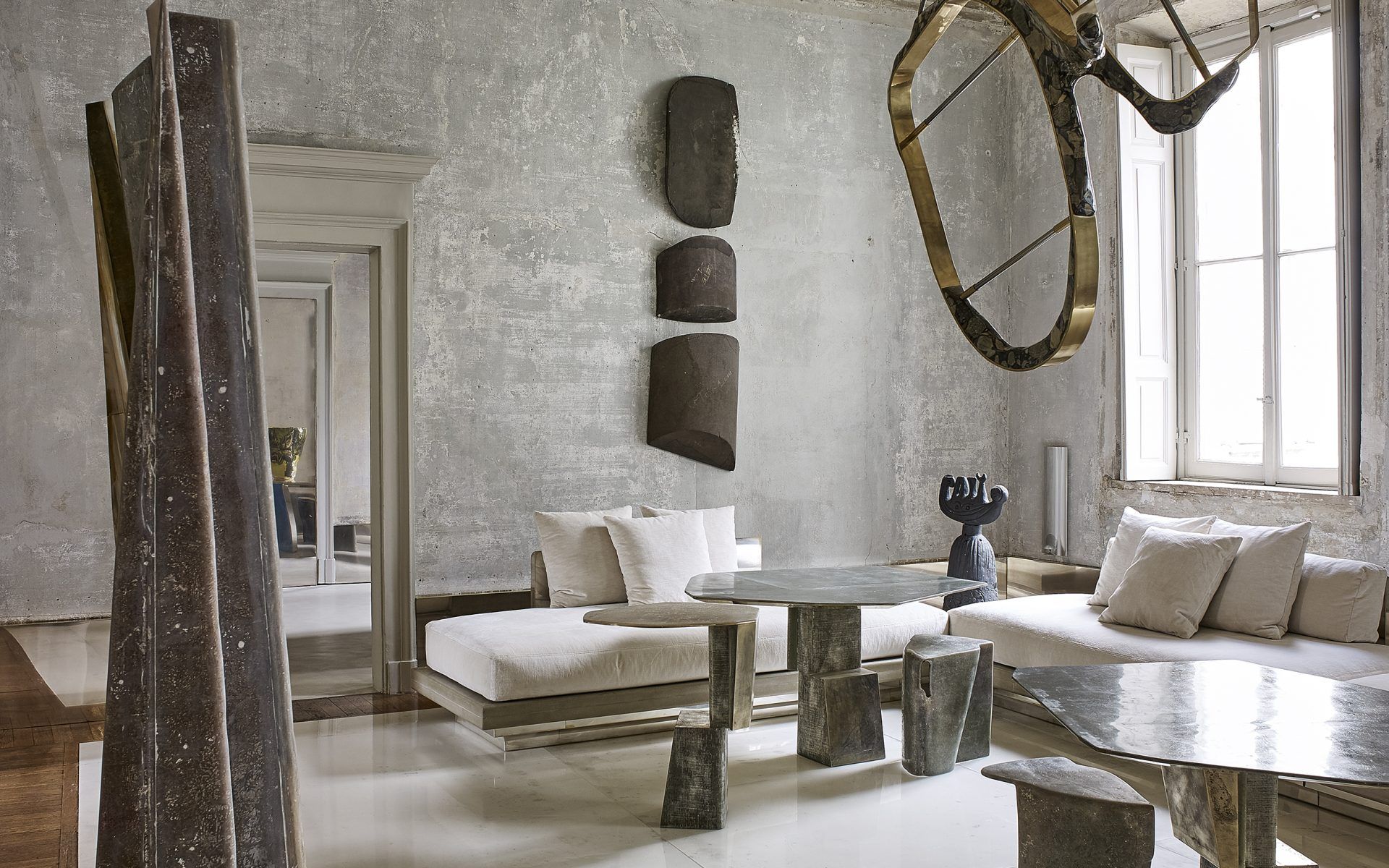 The living room of Vincenzo De Cotiis's home in Milan features many of his own creations.
Photo: Joachim Wichmann For architect and designer Vincenzo De Cotiis, every creation embodies a carefully layered approach between past and present. While his furnishings are both shiny and utterly fresh, they also give off the air that they were excavated during an archeological dig or rescued from a barnacled shipwreck. It’s this dynamic approach that has seen him skyrocket as one of the most in-demand talents in Carpenters Workshop Gallery’s stable of artist-artisans and earned him a spot on Galerie’s Creative Minds list in 2019.

Here, he shares with us why he loves his Milanese palazzo more than ever—just as Italians starts to emerge from months of isolation.

I live in a 17th-century century building located in Milan’s Magenta zone, which traditionally attracted nobility. The palazzo stands behind discreet gates on a quiet street and feels like an oasis, just ten minutes from the touristy center of the Duomo. When I renovated the place, I made no major structural changes, yet we spent a lot of time carefully peeling away what had been added by previous owners: years of paint and paper, false ceilings, ugly moquette floor coverings. What we discovered beneath all of those layers was wonderfully imperfect and absolutely incredible. I wanted to preserve that history and maintain its character by uncovering the original paint colors, the ceiling, and especially the light. The library has a subtle pink hue. Photo: Joachim Wichmann

While emphasizing the preexisting, I worked out what my contemporary intervention would be. I enriched some surfaces that contrast each other to create something visually very exciting while at the same time respectful. After stripping back the wall coverings, I choose to leave the walls untreated, so there is a bit of plaster dust if you brush against them. In every room the colors are different. For example, pink frescoes in the library, blue in the bedroom, and ocher in others. You can still see the gold traces left behind from the 17th-century stuccos. Within that framework, I’ve mixed mostly furniture pieces that were custom-designed by me along with a few other contemporary examples of collectible design. Remnants of frescoed ceilings are still visible in the spaces, which are filled with De Cotiis’s furniture and lighting designs. Photo: Joachim Wichmann

Since I’ve been here during quarantine, the natural light entering has surprised and inspired me. It looks different and changes the colors of the entire space. There’s always classical music filling the rooms, and my wife, Claudia, and I have also made sure there are fresh flowers every day. They symbolize a new beginning and spring. The master bedroom where De Cotiis has been spending much of his time. Photo: Joachim Wichmann

We’ve been eating meals either in our living room—where we have a few dining tables designed as separate islands—and our bedroom. Actually, I have been spending most of the time in my bedroom, which is a big and high space between the kitchen and bathroom, where there’s an antique caryatid that I love. Other favorite works of art in the house are a Florian Baudrexel artwork made of cardboard and a Roger Herman vase. Almost every year I like to change my home. I have new ideas on how to change different rooms to give them a fresh look. But no matter the changes and alterations I make, this place is my island of peace. I’m a very lucky man.

Cover: The living room of Vincenzo De Cotiis's home in Milan features many of his own creations.
Photo: Joachim Wichmann
Next Post