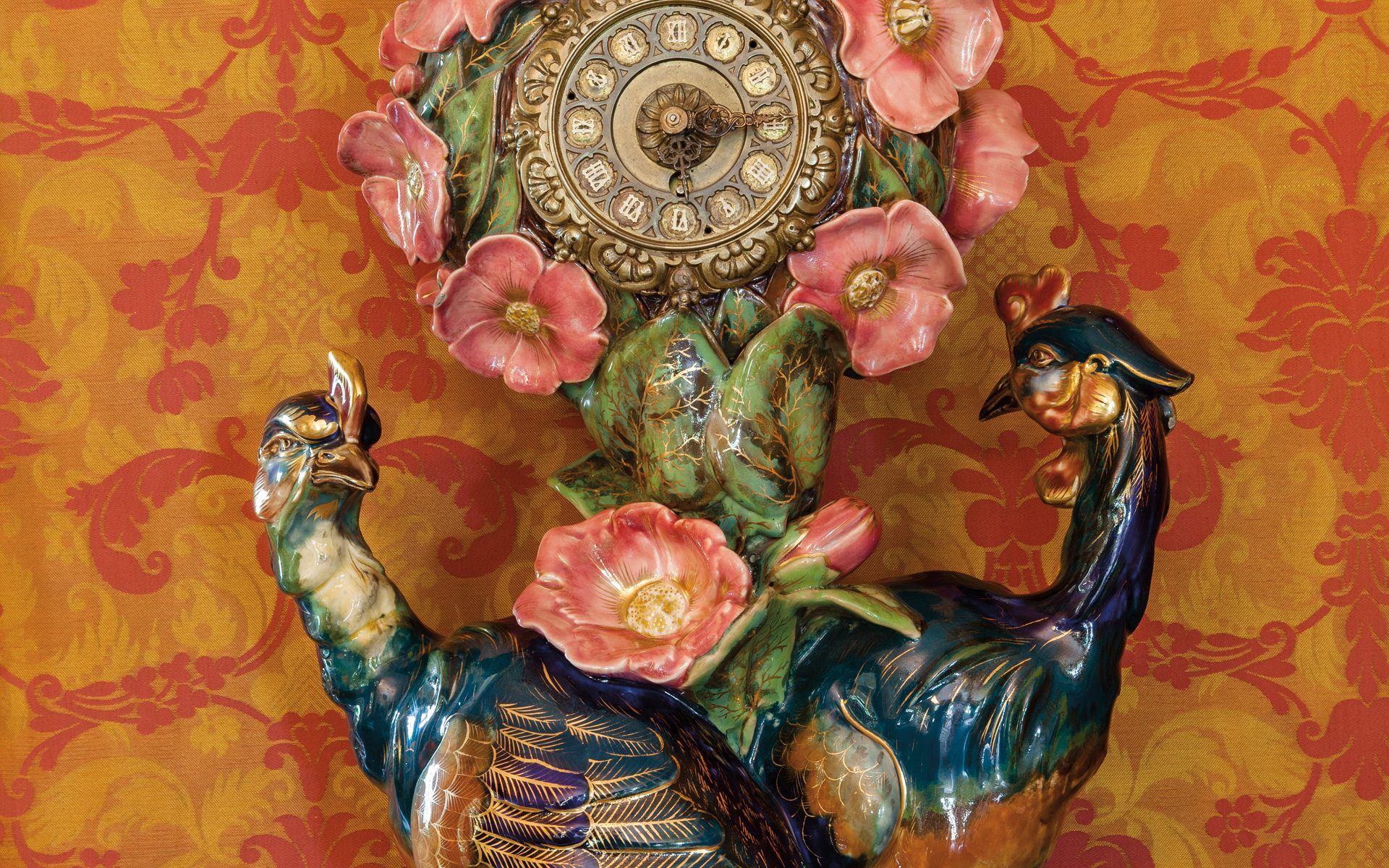 Pheasants holding a clock is the subject of one of the collection’s prized pieces of majolica.
Photo: Courtesy Stoke-on-Trent City Archives. All rights reserved

Is Victorian Majolica Back in Fashion?

How the highly-decorated earthenware is having its moment again

Victorian Majolica, whimsical pieces of glazed, colorful, relief- molded earthenware, was made mostly in England, France, and the United States. It was first created in England in 1849 by Herbert Minton and his brilliant chemist, Léon Arnoux, both ardent admirers of the highly decorated—and precious—pottery of the Italian Renaissance known as maiolica.

The idea was to make affordable pottery for the expanding middle classes as Britain reached the height of its commercial and political power in the Industrial Age. Minton soon had many competitors in Great Britain, on the Continent and in America—its popularity due in part to having been mass-produced and thus relatively inexpensive, and its cost far less than English bone china or imported French or German porcelain.

By definition, modern majolica (pronounced “mah-JOLL-ick-ah”) is soft-paste earthenware that is fired once, to the biscuit stage, then hand-painted with a colorful lead or tin glaze, and fired again. The second firing imparts a lustrous look that distinguishes majolica from porcelain, creamware, or stoneware.

Unlike Italian maiolica, 19th-century majolica was highly modeled and three-dimensional. It is distinguished by its diverse subject matter and shapes. There are brilliantly colored plants, urns adorned with birds and mammals, garden fountains, ewers, jars, even candelabra. Game birds lie on the lids of game-pie tureens. Cows graze on cheese bells, teapots were crafted in the form of cockerels and dogs, and often included pugs and poodles sitting on their haunches. Fish swam through seaweed on decorative platters (a nod to the 16th-century pottery of Bernard Palissy, a French naturalist and potter who reproduced slithery snakes and reptiles on his lead-glazed wares, before he was prosecuted for religious heresy and died in the Bastille).

Due to overproduction, majolica lost its allure in the early 1900s, only to be rediscovered beginning in the 1960s. Prices for majolica are still reasonable except for the larger pieces, which are often one of a kind, and created for international exhibitions like the Centennial Exhibition of 1876 in Philadelphia. Those can fetch tens of thousands of dollars.

Cover: Pheasants holding a clock is the subject of one of the collection’s prized pieces of majolica.
Photo: Courtesy Stoke-on-Trent City Archives. All rights reserved
Next Post In the solarium, an enviable number of majolica pieces is displayed in a 1880s Egyptian cabinet decorated with inlays of mother-of-pearl. Photo: Courtesy Stoke-on-Trent City Archives. All rights reserved