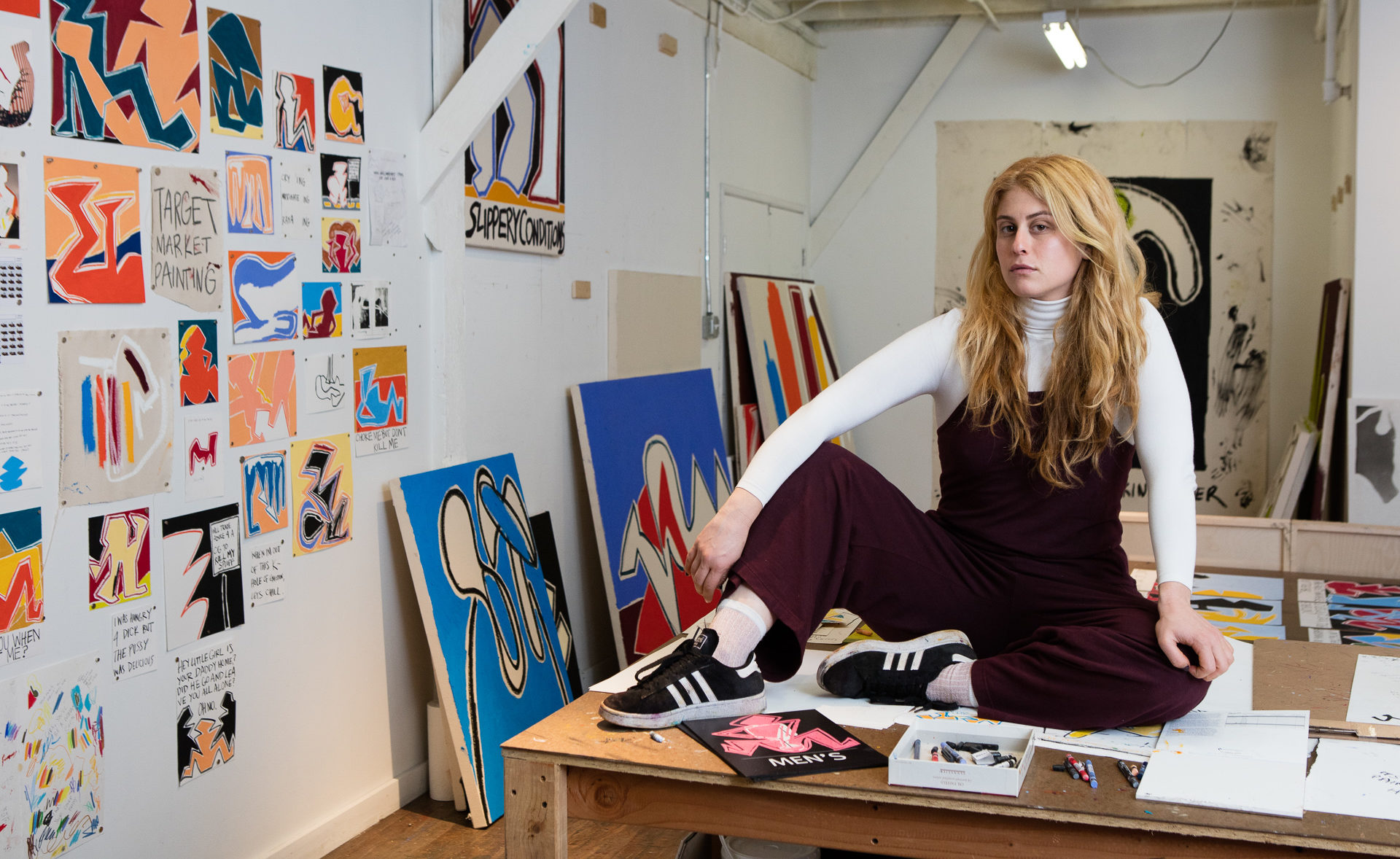 Los Angeles has long appealed to artists. There’s the California sunshine; large, affordable studio spaces; and an easygoing vibe that contrasts with the pressure-cooker environment of New York. But the laid-back L.A. scene has exploded in recent years with new galleries—including heavyweight Hauser Wirth & Schimmel last spring—artist-led spaces, and major museum developments. Following the Broad’s high-profile 2015 debut, the Hammer Museum and Los Angeles County Museum of Art are planning big expansions, and the Institute of Contemporary Art Los Angeles promises to bring more heat to the booming downtown Arts District when it opens this fall. All of this energy is attracting a new generation of young, ambitious artists, including these two up-and-coming talents. Weiner in front of her recent painting I’ll Touch Yours If You Touch Mine.

After attending the Parsons School of Design, Austyn Weiner stayed in New York City, winning swift notice for her arresting portraits in a bold, almost lurid, color palette. It didn’t hurt that Weiner’s first show featured a painting of model Gigi Hadid, a friend who also collects her work. But the artist found hanging out in the fashion scene exhausting. “After five years it was time to take a journey,” she says. Since relocating to L.A. 18 months ago, Weiner has worked as an artist and a curator, organizing a timely group survey of politically tinged art called “We the People” at the Werkartz exhibition space. And this past winter the Lodge gallery in East Hollywood staged a show of her new paintings, which represent a more abstract, if equally colorful, take on the body—primarily, her own. “In New York you’ve got to walk this way and talk this way—there’s a rhythm,” Weiner says. “In L.A. there’s a fluidity.” austynweiner.com Cortright in front of a printed work created with digitally altered imagery sourced from the Internet.

In just a few years’ time, Petra Cortright leveraged early fame from YouTube videos into a collaboration with fashion designer Stella McCartney. While she’s still relatively unknown outside the fashion- and art-world bubbles, Cortright has been described as a 21st-century Monet thanks to the pretty, painterly works she creates by layering digitally manipulated images lifted from the Internet and printing them on large panels. The artist, who shows with Ever Gold Projects in San Francisco, 1301PE Gallery in L.A., Foxy Production in New York and Société in Berlin, also does less Monet-like paintings and videos—including a series with virtual strippers—all making quite an impression. Cortright’s prices and visibility have been climbing, according to Rebekah Bowling, head of “New Now” contemporary art sales at Phillips auction house, which set a record for Cortright last year, selling one of her works for $56,250, double the low estimate. “Some of her collectors buy only cutting-edge contemporary art that deals with technology and its impact on society,” Bowling says. “But for others the work is just visually appealing.” foxyproduction.com; evergoldprojects.com