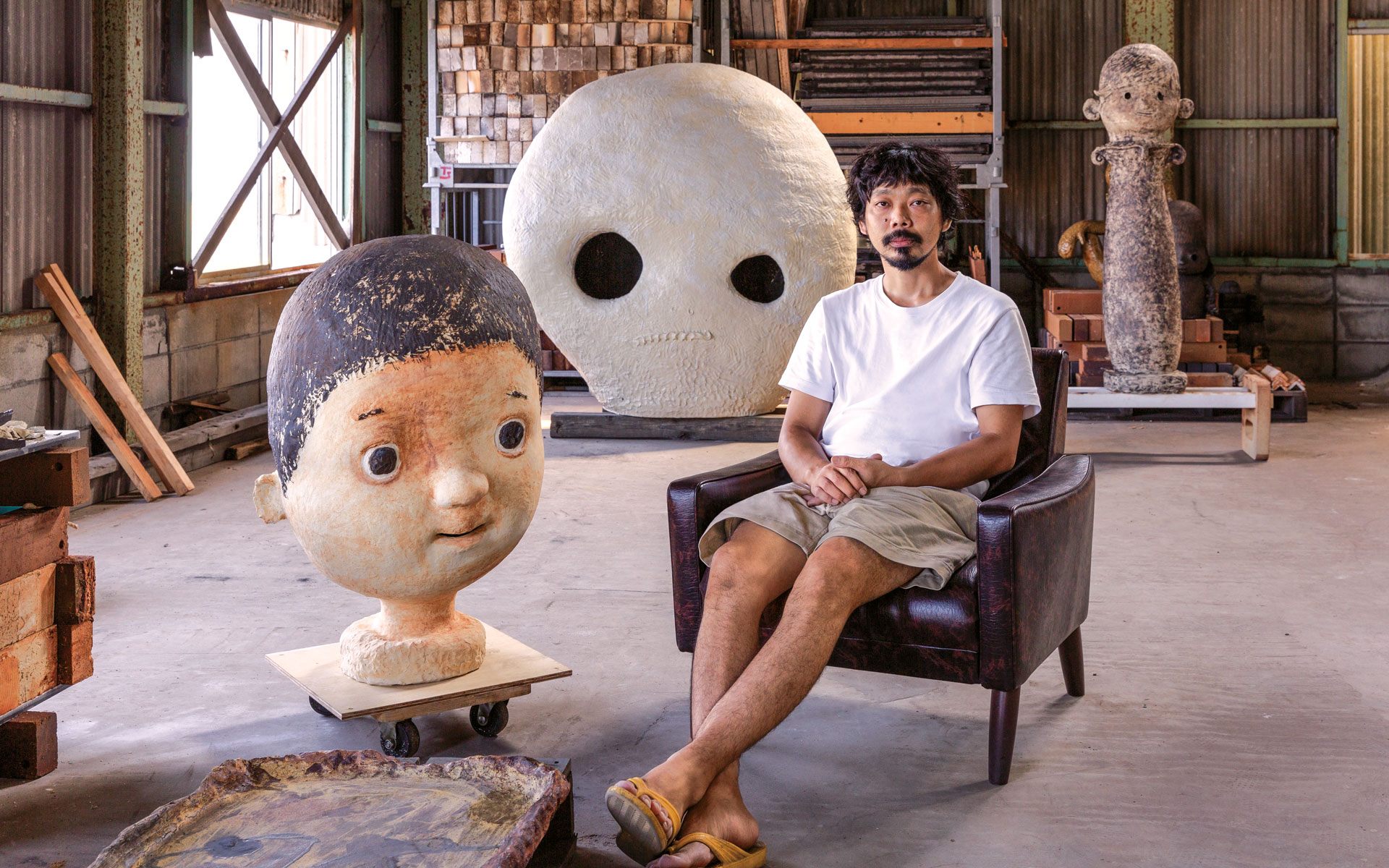 On the far eastern end of the Seto Inland Sea in Japan, near the city of Kobe, lies the island of Awaji. Legend has it that when the gods were creating the Japanese archipelago, they made Awaji first, bestowing it with resplendent mountains and hot springs. The island’s cultural significance and magical beauty have long lured creative types, including Shigeru Otani, whose innovative sculptures, which fuse Japan’s ceramic traditions with a contemporary pop sensibility, have made him a rising star.

Otani has a studio on the island inside a cavernous, light-filled former tile works with breathtaking views of the expansive sea. Though he goes by the name Otani Workshop, he works mostly alone, fashioning his ceramic and bronze figures—some of them larger-than-life—with expressive, exaggerated features and childlike faces. He also makes functional vessels and folklike paintings, all of which he incorporates into idiosyncratic installations. “I want to create objects that are close to living souls,” the artist says. “We have the word yorishiro in Japanese, which refers to an object representative of a divine spirit. I use my characters to give physical space for some spirits to dwell in.”

Little known outside his native country until a few years ago, Otani was catapulted onto the global stage in part by Takashi Murakami, the celebrated Superflat movement founder, whom he met at a ceramics shop exhibition in Tokyo in 2010. A prominent collector and supporter of emerging talent, Murakami became Otani’s champion, giving him a 2016 solo show at his Kaikai Kiki Gallery in Tokyo, which the artist considers his first foray into the art world. “Murakami is a great connoisseur of ceramics,” says Otani. “As we started to work together, I realized there is so much to learn from him, including life as an artist and the difficulty involved in the process from an artwork’s creation to the delivery to an audience.” 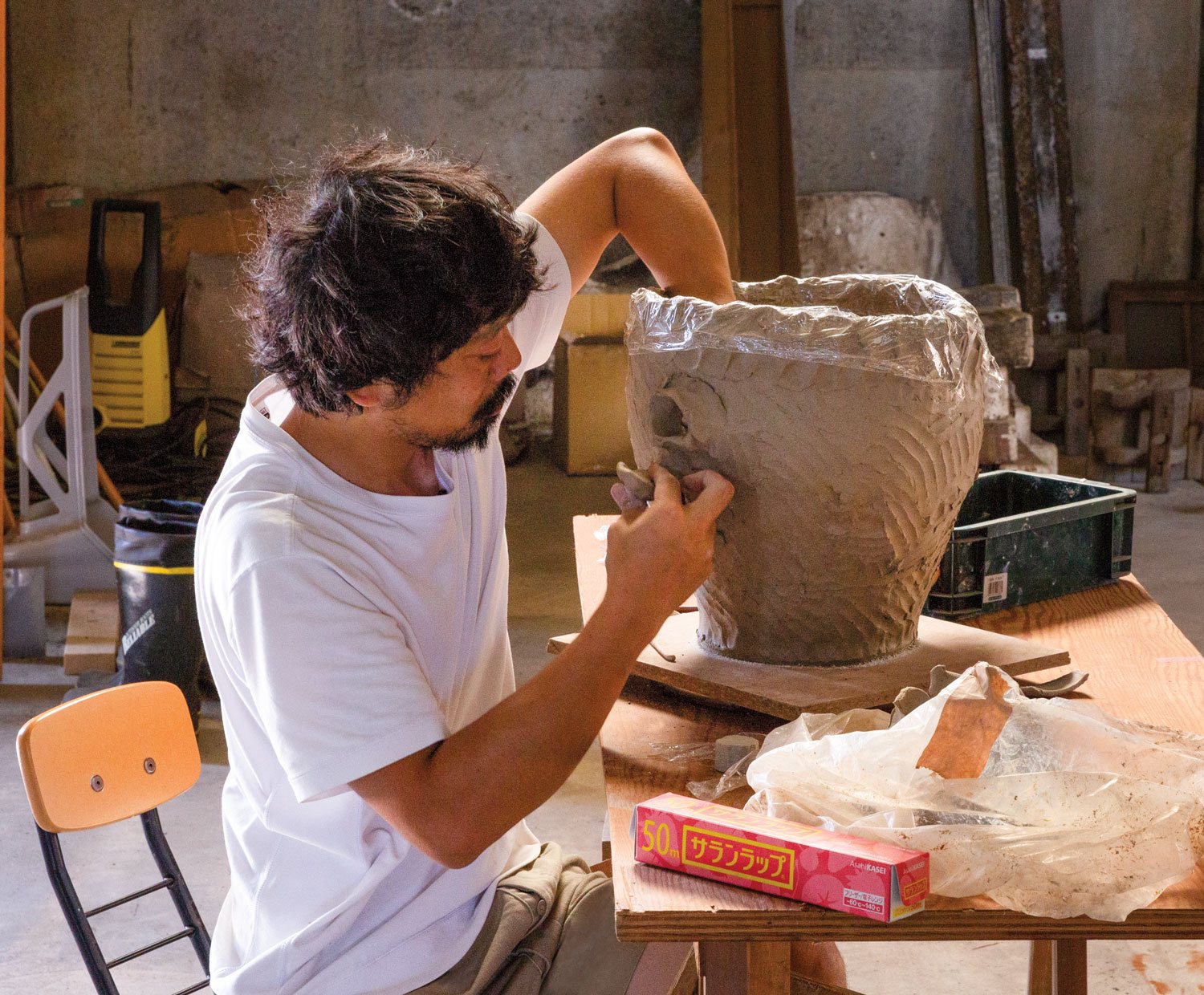 Murakami also introduced the younger artist to Perrotin, the blue-chip gallery that has long represented him. Following solo shows at Perrotin locations in Seoul and Paris in 2018 and 2019, respectively, Otani is now preparing for his first solo exhibition in New York, on the third floor of the expansive Lower East Side space. On view from October 28 through December 19, the new works are inspired by childhood memories of communicating with inanimate objects such as, he says, “toys, stones on uninhabited lands, and the space between bridge girders.” 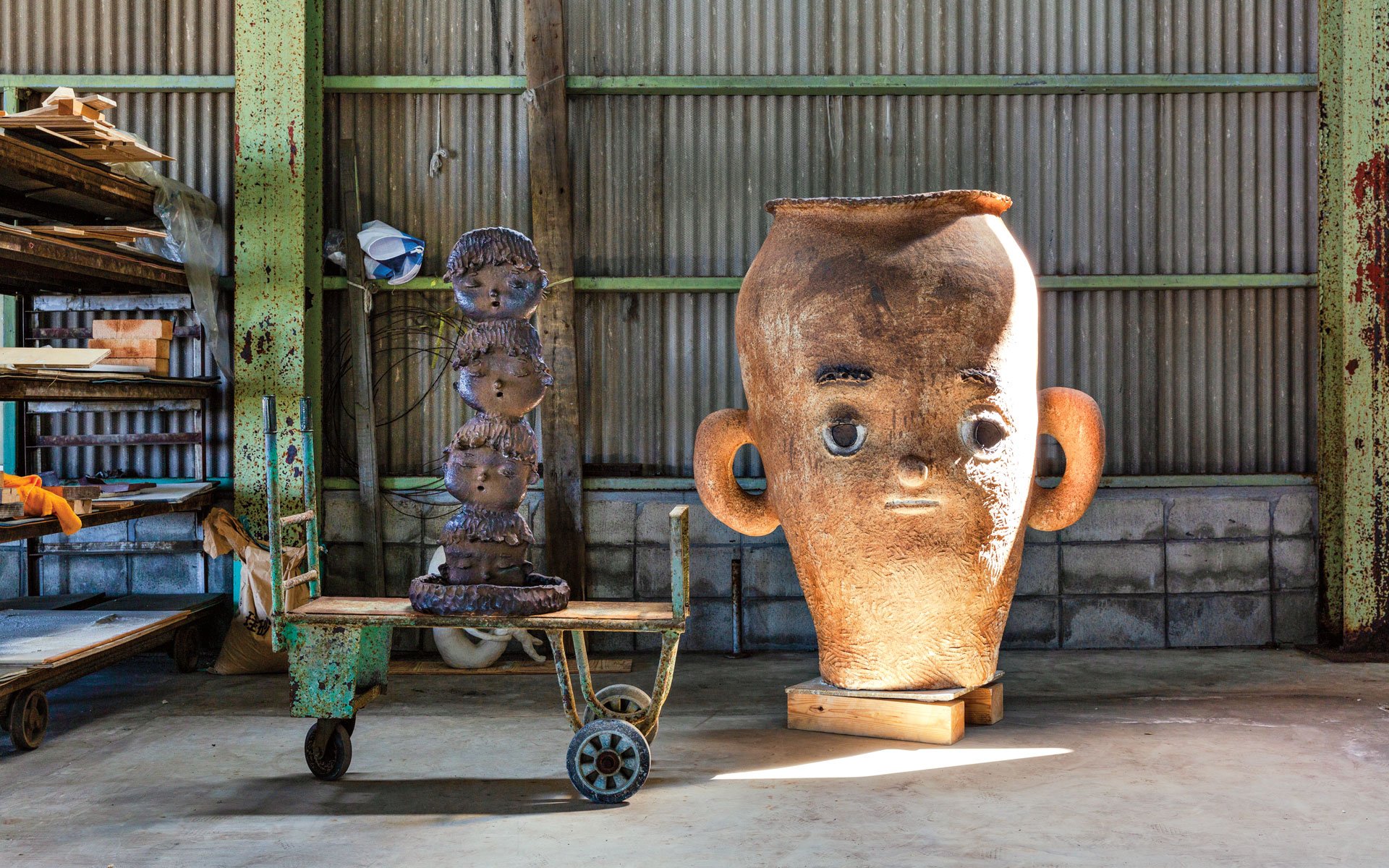 As a student at the Okinawa Prefectural University of Arts in the early 2000s, Otani dreamed of being a sculptor, transfixed by the tactile sensibilities of clay. But upon graduating, he found himself struggling “to create work that I could call my own,” as he puts it, adding, “Maybe it was difficult for me to relate to the art scene because I was studying in remote corners of the country.” Determined to present his work to the world, the artist decided to take part in a handmade craft fair in 2005 at the famed Shigaraki Ceramic Cultural Park, located in one of the oldest pottery-producing areas in Japan, which is renowned for its locally sourced sandy clay. “Otani Workshop was the shop name I came up with, and I’ve continued to use this name because it represents my personal history.” 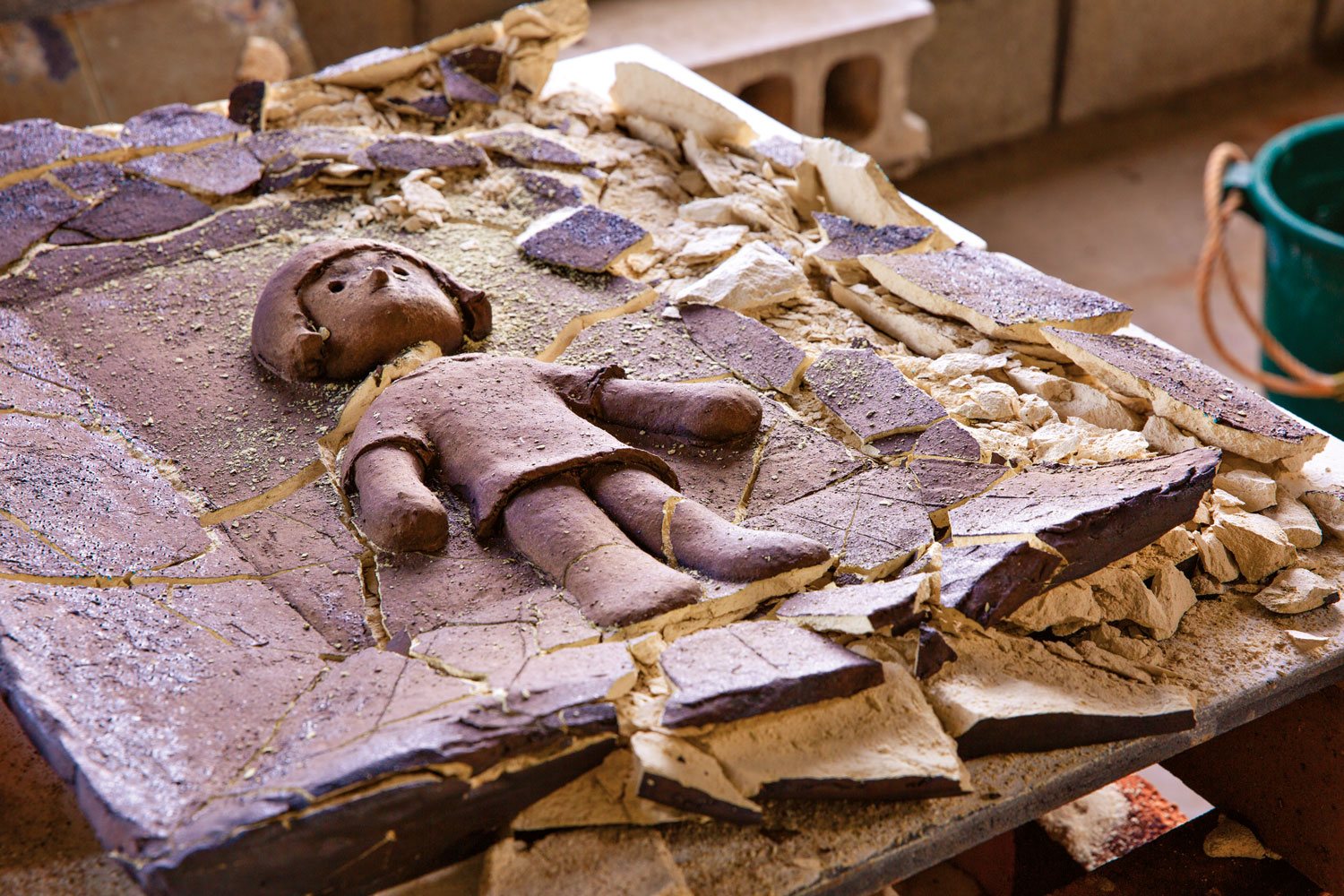 Otani developed his unique artistic language while using the time-honored techniques he refined in Shigaraki, where he spent almost a decade working in a shared kiln with expert potters. Starting off with vessels, he soon had a breakthrough, mastering more complex types of expression. “My work embraces many elements I learned there,” he says. “Looking at old pots from Shigaraki, I’m drawn to the incomplete techniques and imperfect forms. I’m not sure if the creators of these pots were aware of such sensibility, but it influences my creative process and my work shares the same aesthetic.” 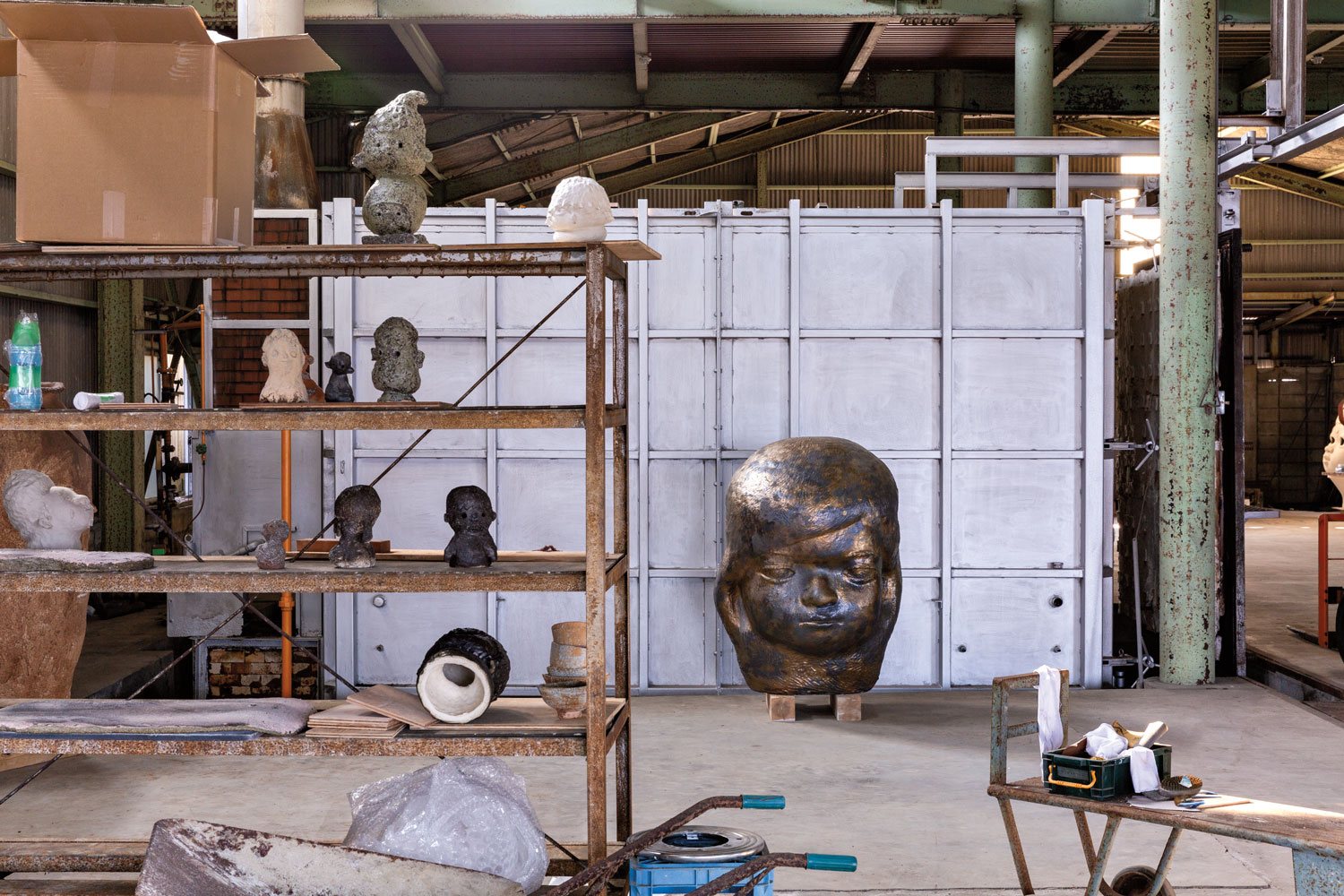 A variety of sculptures in the studio. Photo: Ringo Cheung, Courtesy of the artist and Perrotin. ©2020 Otani Workshop/Kaikai Kiki Co., Ltd. All Rights Reserved.

Wanting to experiment with larger sculpture and establish a studio of his own, Otani relocated to Awaji in 2017, discovering the empty tilery that had been neglected after repeated earthquakes and declining sales of traditional roof tiles. Most important, it came equipped with an enormous kiln, which he had restored, and provided him with more space to paint.

“My studio is right next to the sea, and I can hear the sound of the waves,” says Otani, who typically starts working as soon as he wakes in the morning and continues into the night, using a kitchen timer to check on the kiln every hour. Allowing Otani to push the limits of his imagination, Awaji also features quite literally in his new works, as he incorporates wood and iron found nearby into the finished pieces. “There is something special about the island,” he says. “You can almost feel the lives from ancient times.”

A version of this article first appeared in print in our 2020 Fall issue under the headline “Talking Heads.” Subscribe to the magazine.