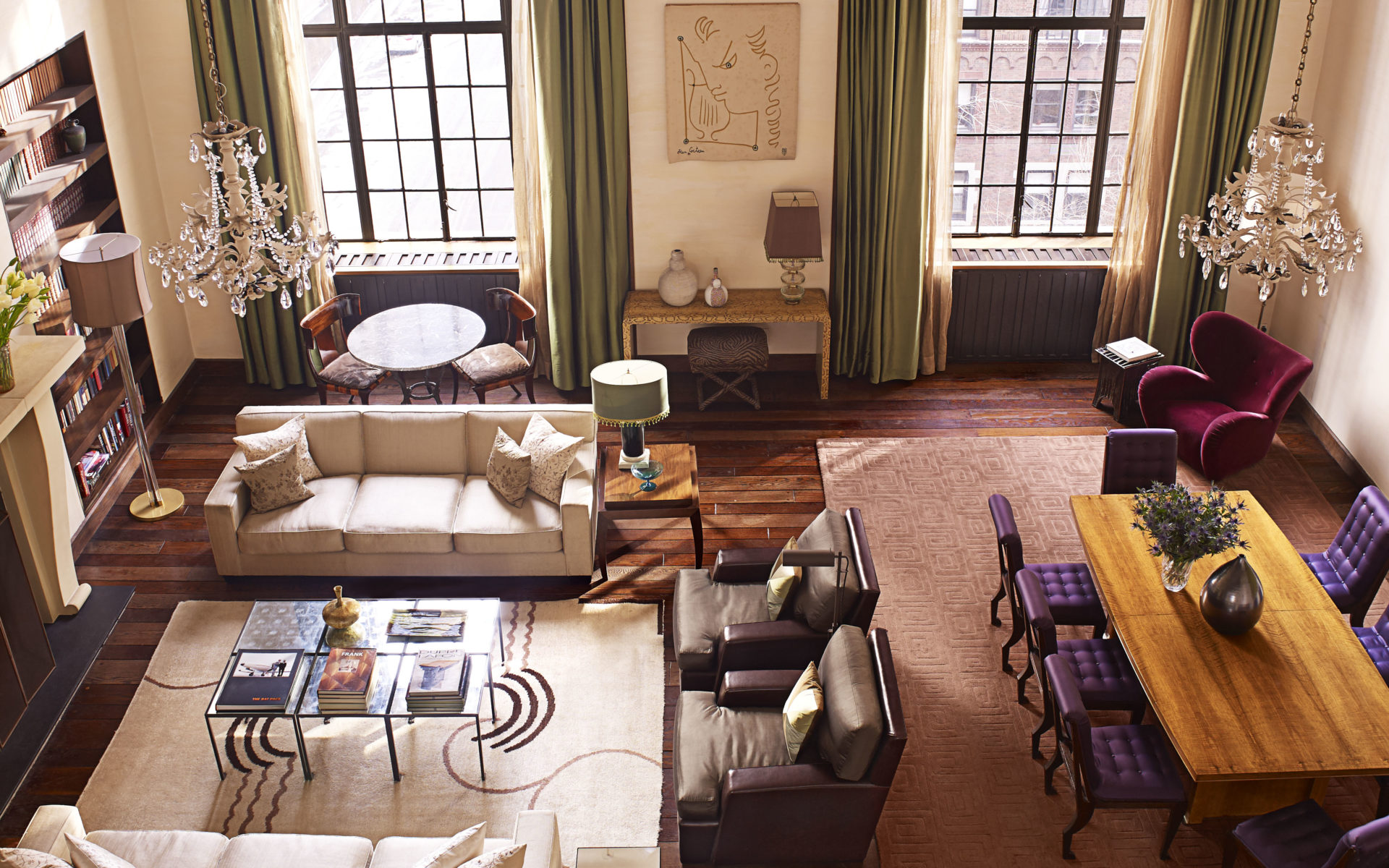 An artwork by Jean Cocteau is framed by soaring windows in the great room of a couple’s Manhattan apartment, which was recently refreshed by David Collins Studio nearly two decades after the firm originally renovated it.
Photo: Pieter Estersohn Three decades ago an American couple on vacation in London walked into the acclaimed restaurant La Tante Claire and fell in love—with the decor. Back home in New York, a renovation of their apartment was going badly, and they found themselves enthralled by the restaurant’s glamorous yet distinctly modern interior, the work of a young, little-known Irish designer named David Collins. “We were very dissatisfied with our architect and looking to change,” says the wife. “There was a warmth and sensuality to La Tante Claire that you don’t get in a lot of places, so I immediately asked the name of the designer.”

The pair arranged to have tea with Collins, who was then in his 20s and just beginning to make a name for himself. “After we left I said, ‘Absolutely not—why would we bring such a young designer across the ocean to do our apartment?” the husband recalls. “But a month or so later I was picking him up at JFK.”

It was Collins’s first trip to the U.S., and their apartment was among his very first residential projects. In the end, things turned out well for everyone. As Collins went on to international fame—palling around with Madonna and conceiving some of London’s most notable restaurants and bars—he would also design a country home for the couple and then a smaller apartment in the city when they became empty nesters.

The latter, a duplex in a celebrated 1920s co-op building noted for its soaring double-height front rooms, has remained the clients’ home for the past 17 years, its interiors virtually unchanged from the day Collins finished them—a tribute to the timelessness of the decor, for sure, but also a reflection of their deep affection for the designer, who over the years had become a close friend. When Collins unexpectedly passed away in 2013, it only strengthened their resolve to keep his work intact. “His death was a terrible loss,” the wife says. “But our consolation is that he’s with us every day, through the beauty he gave us.” On the mezzanine, Art Deco side tables and lamps flank a sofa by David Collins Studio, which designed the other furnishings in the seating area as well; the stool is in a Donghia satin, and the painting is by Marko Duricic. Photo: Pieter Estersohn

Nearly two decades later, the design still feels remarkably current, but certain furnishings were showing their age. For help the homeowners turned to David Collins Studio, which has continued to thrive after the designer’s death, under the leadership of CEO Iain Watson (who cofounded the firm) and creative director Simon Rawlings. Both men were well acquainted with the original renovation of the apartment—with Watson having served as the project manager—and they were able to identify exact replacements or alternatives that were consistent with Collins’s vision.

Take, for example, the fabric that now covers the great room’s slope-backed dining chairs, which were custom made by Collins in the style of legendary designer Marc du Plantier. The original upholstery was no longer available, so the team looked “to find something David might have selected himself,” Watson says. They settled on an inky purple Dedar satin, a choice everyone felt Collins would have approved of since he’d used something similar on his own dining chairs. “David had an obsession with colors and lighting,” Watson says. “He felt they made you look good and feel good, while also creating atmosphere.” The study is outfitted with a Jean Royère writing table and a desk chair upholstered in a Dedar fabric. The David Collins Studio armchairs and ottoman are covered in a Donghia satin, and a Fontana Arte mirror is mounted above the antique English mantelpiece. Photo: Pieter Estersohn

It’s a philosophy on glorious display in the room, where a sophisticated combination of Art Deco–inspired custom-made pieces and midcentury treasures by such masters as Jacques Adnet, Jules Leleu, and Jean Royère evokes an air of restrained opulence. Add to the mix 1940s crystal chandeliers and yards of green satin framing the double-height casement windows and you have something that’s contemporary but nods to the past.

Serving as a kind of aesthetic exclamation point is a magisterial Pat Steir painting marked by drips and splatters in mossy hues. The homeowners vividly recollect the day they revealed to Collins that they’d purchased the artwork, one of the few decisions they made without his input. “There was dead silence on the phone—when David didn’t like something he went quiet,” recounts the husband. But Collins ultimately gave his blessing once he saw the piece installed.

The Steir is among the few works hanging in the apartment, where the sense of artistry comes more from the exquisite furnishings and luxe materials and textures—whether the frescoed wall finishes, a sumptuous burgundy velvet upholstery, or the custom-made resin doorknobs. It’s in the master bedroom and study, both on the second level along with a media room, that Collins’s renowned use of materials and color is most visible.

In the bedroom, for instance, he employed an ethereal cream-and-pistachio color scheme, while the tranquil study, with its Royère writing table and curvaceous desk chair, is an essay in his signature shade of lavender-blue. In fact, the periwinkle wool rug came directly from the designer’s own home. In some respects the apartment amounts to something of a David Collins’s greatest hits. “David would bring his young staff over to see this place and they would say, ‘Oh my God, that’s David’s blue or David’s this or that,’” recalls the husband. Which is why, adds the wife, “keeping the continuity of his colors and other choices was so important.” If the ultimate measure of any design project is in how well it stands the test of time, then it’s safe to say this one comes through with flying colors.

Cover: An artwork by Jean Cocteau is framed by soaring windows in the great room of a couple’s Manhattan apartment, which was recently refreshed by David Collins Studio nearly two decades after the firm originally renovated it.
Photo: Pieter Estersohn
Next Post