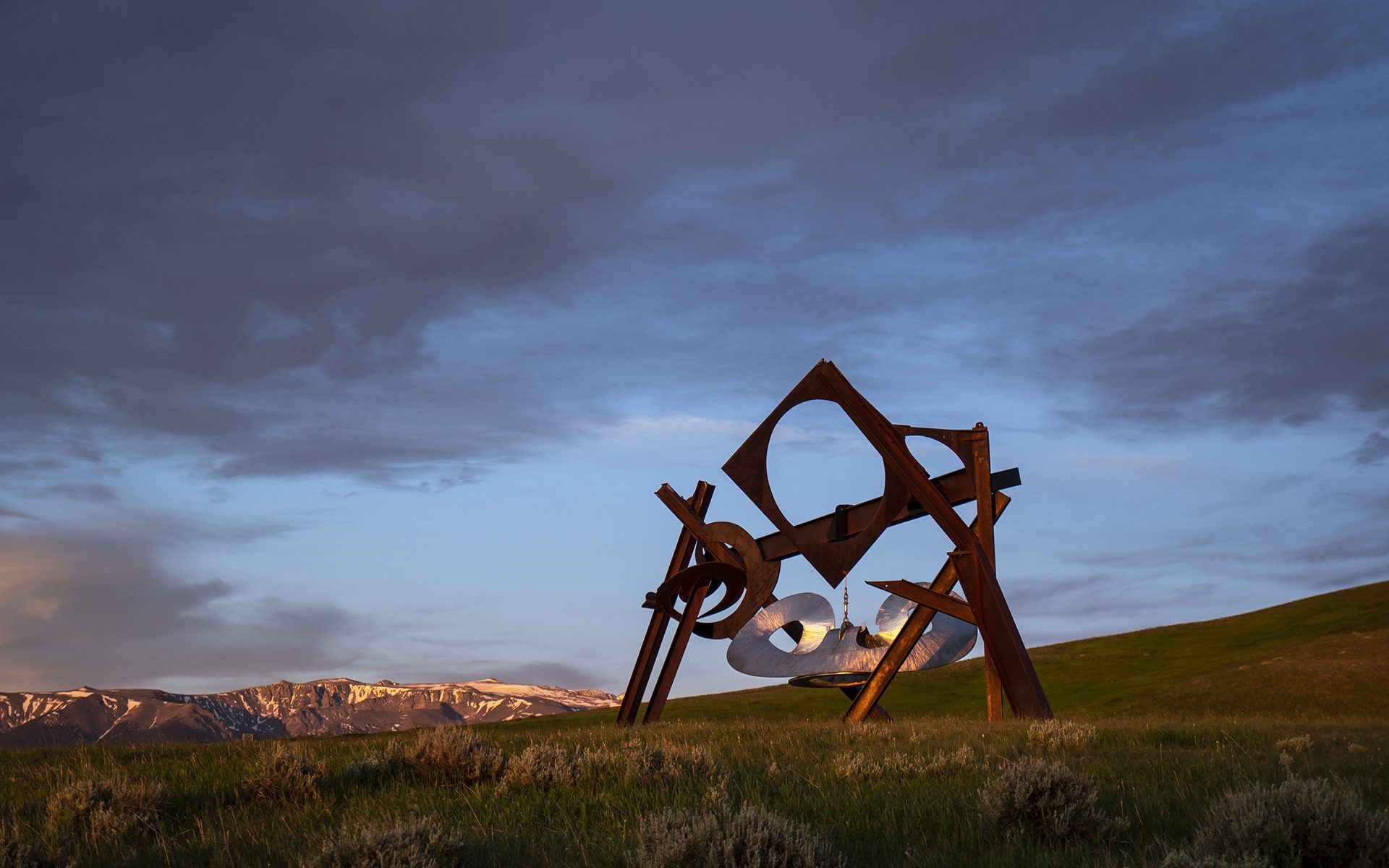 A sextet of string musicians performed Schoenberg’s Transfigured Nights and Tchaikovsky’s String Sextet in D Minor, the melodies floating along a late summer breeze that blew down from the Rocky Mountains. A background harmony of birds chirping and hay dancing in the wind added to the idyllic atmosphere. As the recital proceeded from late morning to the first hour of the afternoon, the bright western sun glistened across the orchestra’s instruments.

The event was just one in a series of performances that make up Tippet Rise Art Center’s annual five-week classical music concert series, this year taking place through September 25.

“We knew the land was so powerful,” says the Montana arts center’s co-founder, Cathy Halstead, who acquired the 12,500-acre property in the sleepy town of Fishtail in 2010 alongside her husband, Peter. “We spent time thinking what really feels right for nature and some way create a metaphor for the land.”

More than ten large-scale sculptures are installed throughout the rolling vista in a way as to avoid visual interruption. Therefore, when guests come across Ensamble Studio’s 40-foot-tall Inverted Portal or Mark di Suvero’s equally majestic Proverb, no other building or artwork is visible. The singular engagement with art and nature makes a stroll around Tippet Rise an almost otherworldly experience, a series of chance encounters with real trees or Ai Weiwei’s Iron Tree, a life-size work made with 97 parts cast from specimens found in southern China; it is among the recent entries to the center’s public-art collection. 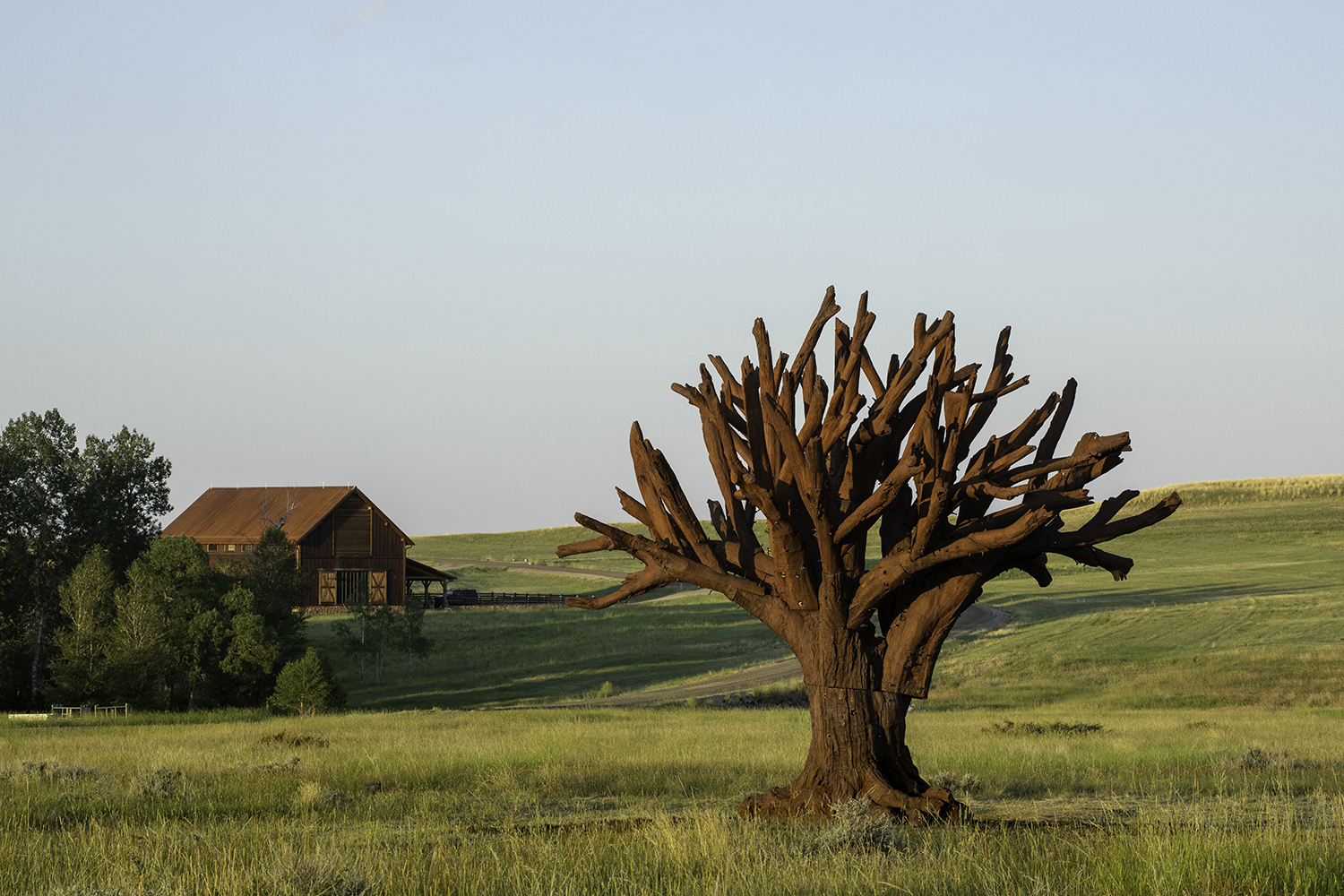 Inspired by a visit to New York State’s Storm King Art Center in the ‘70s, the Halsteads set out to create a place that offered unmeditated interventions with art while blissfuly letting nature lead the way. “On a scorching day, we ran from one sprinkler to the next and came across another sculpture each time,” Cathy Halstead tells Galerie of that influential experience. Peter too recalls their trip to Tickon sculpture park in Denmark, another destination where art melds into the landscape.

The couple’s strategy to amass works that are contemplative and striking yet noninvasive has relied on organic relationships with artists. Most recently, they invited North Carolina-based talent Patrick Dougherty to create a second sculpture to join his 2015 installation, Daydreams, which is a reproduction of a frontier-period schoolhouse with an interior punctuated with willow branches collected from the property. The artist’s new addition, Cursive Takes a Holiday, utilizes a similar bounty of willow branches woven into rounded arches to form a hut outside the original structure. 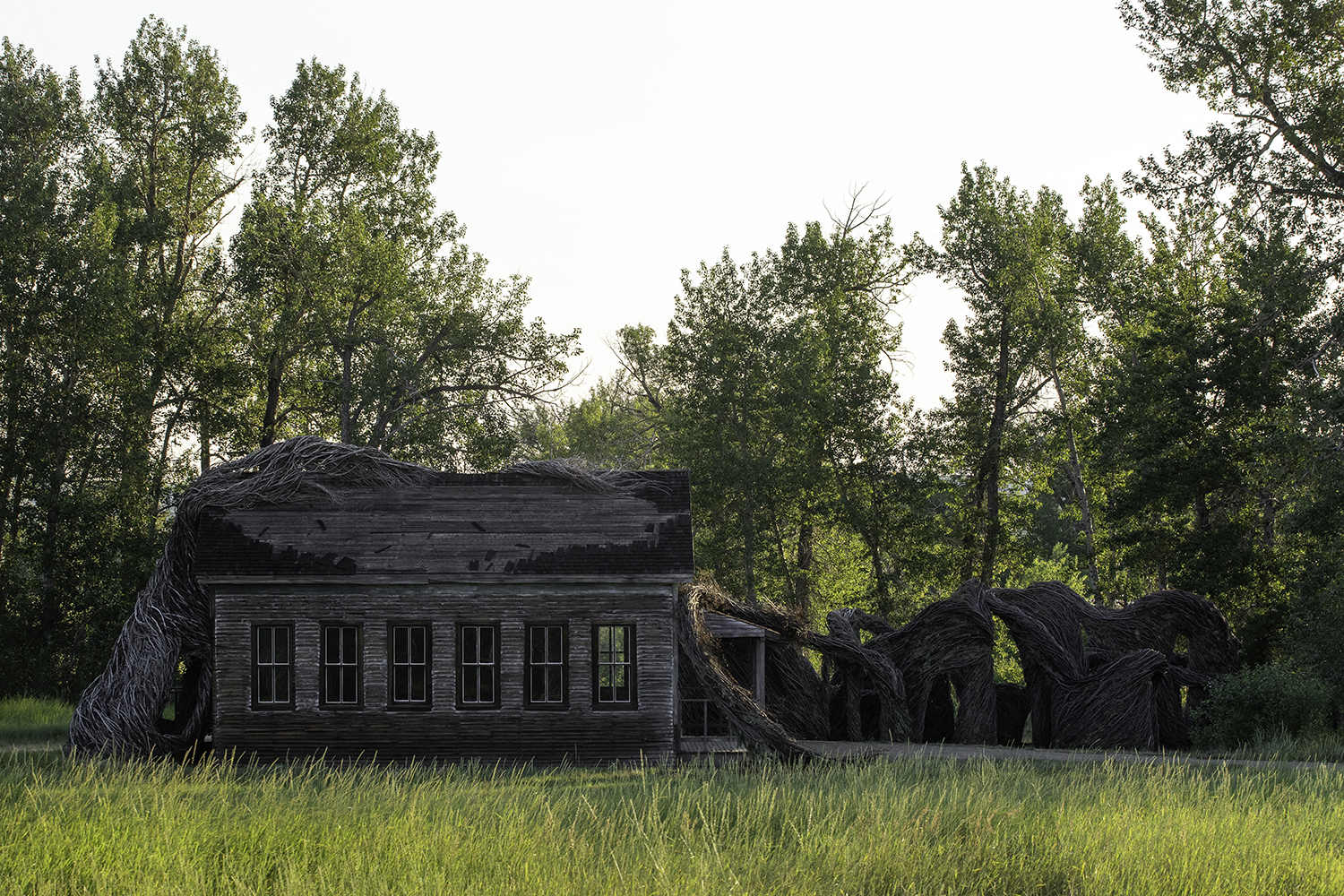 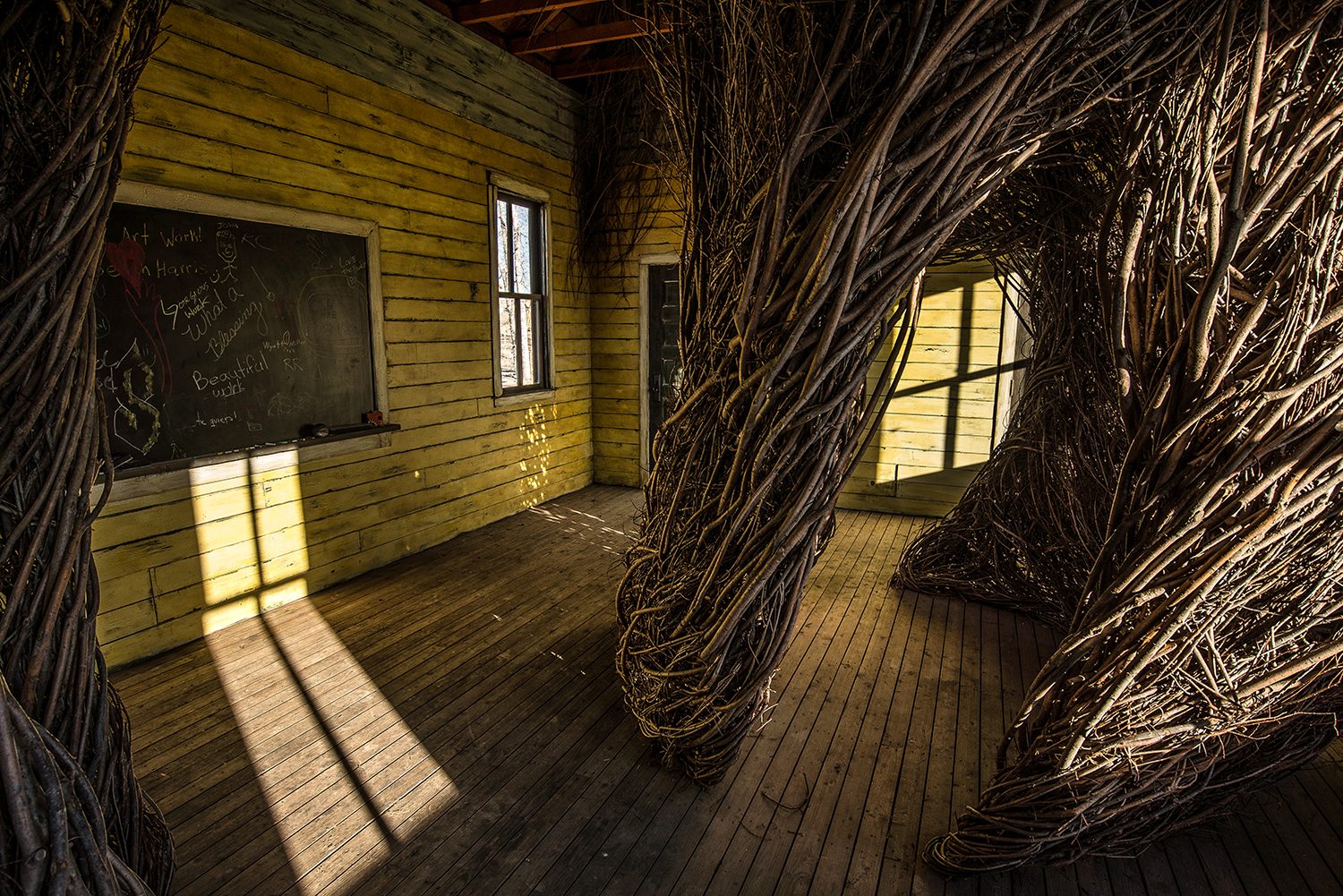 Another of the Halsteads’ passions is music, and at Tippet Rise, classical music is celebrated with this annual end-of-summer series that features emerging and established performers from across the globe as well as a residency program that includes access to the recording studio on site. More than ten Steinway pianos, including one that dates back to the 19th century, are stored at the property, and visiting musicians are invited to pick their instrument of choice to play. 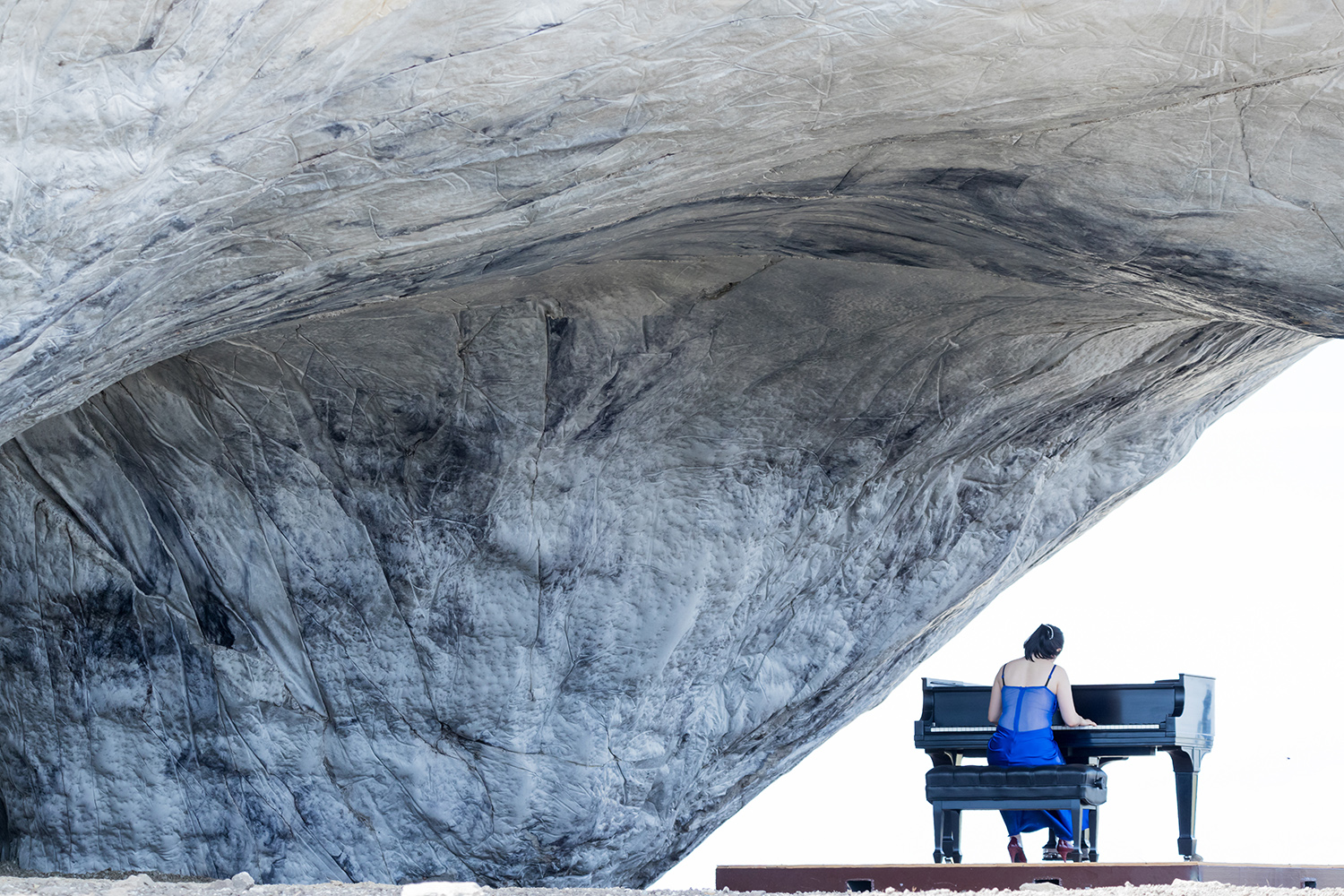 This year’s event kicked off with a program organized by New York-based musician Pedja Mužijević of the Baryshnikov Arts Center. Hungarian pianist Zoltán Fejérvári and violinist Jennifer Frautschi inaugurated the first evening with Schumann’s Piano Trio No. 2. The sound reverberated off a suspended kinetic Alexander Calder sculpture while through the music barn’s windows, guests could take in a view of the bucolic landscape. Later came the premier of a collaboration between cellist Arlen Hlusko and composer Reena Esmail who wrote Sandhiprakash with Tippet Rise’s vistas in mind. Commissioned by the art center, the duo communicated through Zoom between New York and Los Angeles during COVID lockdowns to compose and rehearse the piece. The composition’s maneuver between energetic crescendoes and paced-down moments is a respond to the dawn to dusk, which is exceptionally experienced with the Rockies’ open skies. 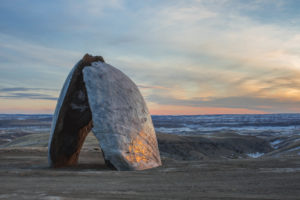 The programming will continue throughout September with concerts by the Calidore String Quartet, Marc-André Hamelin, and Gryphon Trio among others. “We have an interesting connection between the earth and the sky,” muses Peter Halstead. “Lightning, for example, is a cloud’s connection with the earth—this is the way nature plays with the land here.”