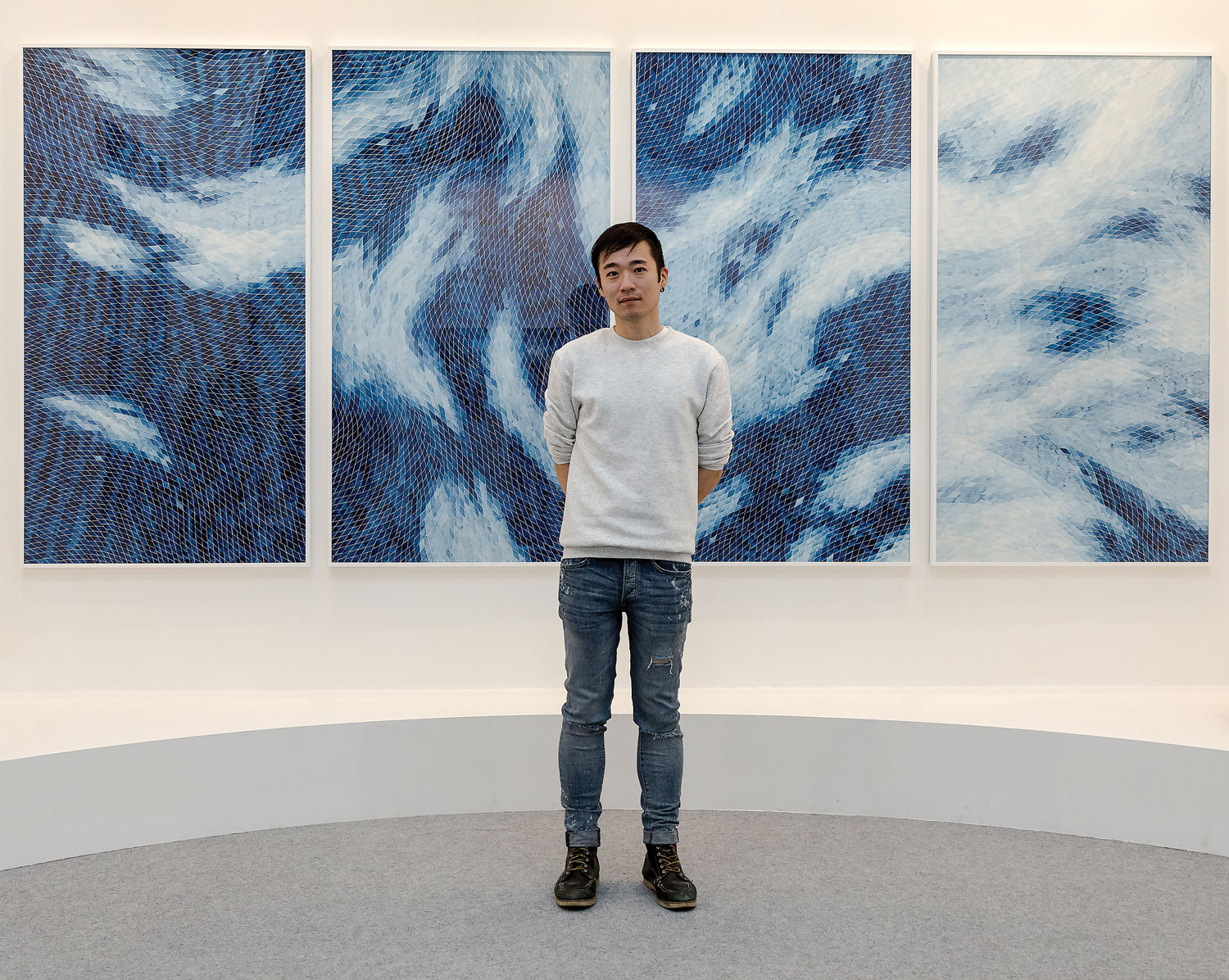 Timothy Hyunsoo Lee with his *A tremor, a touch, a ripple (han, sun, keum, man),* 2018.
Photo: Courtesy of the artist and Sabrina Amrani Gallery, Madrid Timothy Hyunsoo Lee with his A tremor, a touch, a ripple (han, sun, keum, man), 2018. Photo: Courtesy of the artist and Sabrina Amrani Gallery, Madrid

Timothy Hyunsoo Lee was in his final year of pre-med studies at Wesleyan University in 2012 when he realized his life’s work was in the studio rather than the clinic. “It hit me that the skills I was developing to work in a medical setting actually suited me better in a visual art context,” explains the multimedia artist, now represented by Sabrina Amrani gallery, in Madrid. “A lot of people call the shapes in my paintings diamonds or scales, but I’ve always referred to them as cells because they were inspired by laboratory work at school.”

Born in Seoul, raised mostly in Queens, and now living in Madrid, Lee turned to art in earnest when he used watercolors to explore the theme of childhood anxieties. For his earliest series, “Traces,” in 2012–13, he would slowly build small blocks of color, using the inevitable errors as a challenge to resolve the pattern. “I started off painting as a very personal investigation, and it eventually led into the exact opposite,” explains Lee, whose experimentations have flourished since he closed his Brooklyn studio and moved to Madrid in 2016. “Now my work is about mediating the microcosm with the macrocosm, or my own individual experience with a universal collective point.”

Recommended: 8 Young Artists Not to Miss at the Armory Show

Following an exhibition at Manhattan’s Armory Show with Amrani in March, Lee’s public installation at the Stewart Manor train station in Garden City, New York, was unveiled in late June, transforming it into a chapel with laminated-glass windows. “Most people who use the station are commuting to and from the city,” he says. “I wanted to turn it into a sanctuary. The hope is that the installation will help them find a moment of peace.” Timothy Hyunsoo Lee, Murmuration I, 2017. Photo: Courtesy of the artist and Sabrina Amrani A version of this article first appeared in print in our 2018 Summer Issue under the headline Seeking Beauty. Subscribe to the magazine.

Cover: Timothy Hyunsoo Lee with his *A tremor, a touch, a ripple (han, sun, keum, man),* 2018.
Photo: Courtesy of the artist and Sabrina Amrani Gallery, Madrid
Next Post