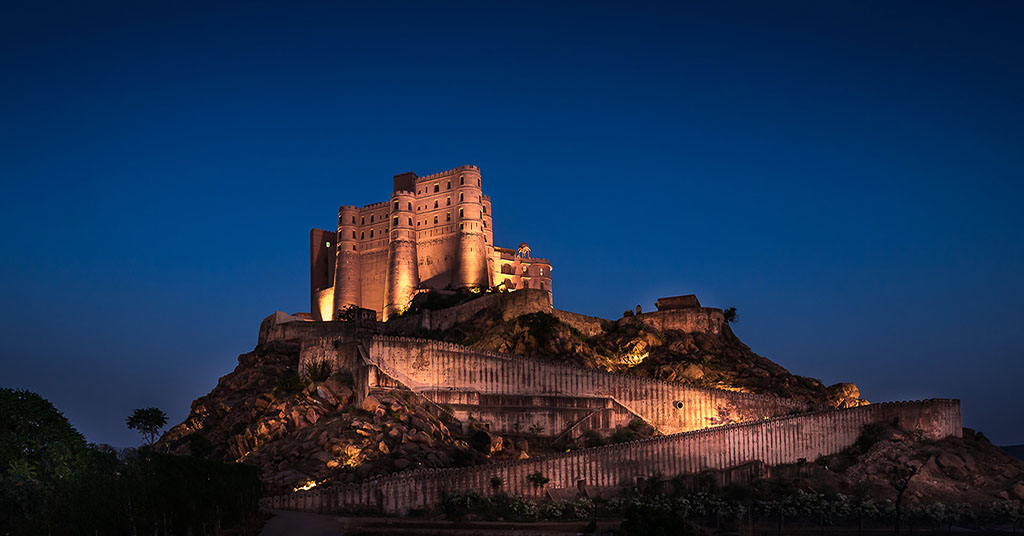 From a beautifully restored 230-year-old fortress in India to a strikingly transformed grain silo in South Africa, these new hotels make the most of their storied settings

While best known for its dramatic seaside landscape, the South African capital has been recently making waves for its lively art and design scene. The latest addition is the recently opened Silo Hotel. With 28-rooms, it occupies the top six floors of a 1921 grain silo revamped by British designer Thomas Heatherwick. The lower floors will house the Zeitz Museum of Contemporary Art Africa, which is slated to open in September. While the concrete façade retains its austere, industrial character, the hotel rooms include strikingly faceted floor-to-ceiling windows, that offer views of the Victoria & Albert waterfront in one direction and Table Mountain in the other. Inside, the rooms exude a light, modern sensibility, with colorful soft furnishings aplenty. Complementing the museum downstairs, the hotel has its own gallery, dubbed the Vault, that will present rotating exhibits of up-and-coming South African artists, starting with a selection of Kate Gottgens’s evocative figurative paintings. View from the superior suite at the Silo Hotel. A historic photograph of the original silo along the Victoria and Albert waterfront in Capetown.

There is certainly no shortage of extravagant hotels in India. But the luxury hotel group Alila’s latest property (opening in Spring) in a beautifully restored 230-year-old fortress in Rajasthan deserves special mention. Perched high on a granite hill with 360-views of the sweeping arid Rajistani landscape, the original structure has been carefully preserved.  The majestic turrets, arched windows, and thick fortified walls show the influence of both British and Mughal architecture. The restored fortress at night.

The 59 guests rooms were created by strengthening the existing structures and adding partition walls. Five royal suites, offering the ultimate luxury experience, are built on the top level and an atmospheric spa is located in the subterranean dungeon, which is lined in granite carved onsite. Located one-hour from the famed pink city of Jaipur, Alila Fort Bishangarh can be used as a base for exploring the region, but it’s perhaps best as a refuge for getting away from it all. All the rooms in the Alila Fort Bishangar offer stunning views of the Rajistani desert.

Among this year’s most eagerly anticipated openings, The Ned is a spectacular transformation of the historic Midland Bank, a 1924 neoclassical landmark designed by Sir Edwin Lutyens. A collaboration between the Sydell Group (whose other properties include The Nomad in New York) and Soho House, The Ned was conceived as part hotel and part members club. The 1,500 or so members will have access to special areas like the lounge bar in the former bullion vault. Throughout the building, numerous original features remain, such as the 92 green verdite columns, giving a decidedly 1920s vibe. An artist’s impression of the food hall in the Ned.

The 252 rooms feature eclectic vintage furniture and upholstery and are divided into six distinct categories. The Cosy room for example, features bespoke Anstey wallpapers and rattan bedside tables, while the Large Heritage room features French-polished walnut wall paneling, a glass palm chandelier, and leather wingback chairs. The mosaic marble bathrooms with rainwater showers have more of a sleek, contemporary feel. The Ned also boasts no fewer than nine dining spaces and two member’s only swimming pools—one in the depths of the building and one on the rooftop, which overlooks St. Paul’s Cathedral and across the City of London. The Medium Room in the Ned.

Situated along the Singapore River, this impressive 1895 building was one of the city’s so-called “go-down” warehouses, used to store goods during the heyday of the Straits of Malacca trade route. During the early 20th century, the area was the red-light district—a bustling scene of underground distilleries and secret societies. Now, it’s one Singapore’s swankiest residential areas. Chris Lee, head designer for the leading Singapore design firm Asylum, hoped to put a fresh spin on building’s industrial past. Exterior view of the Warehouse Hotel in Singapore. The large open-plan lobby of the Warehouse Hotel.
Next Post