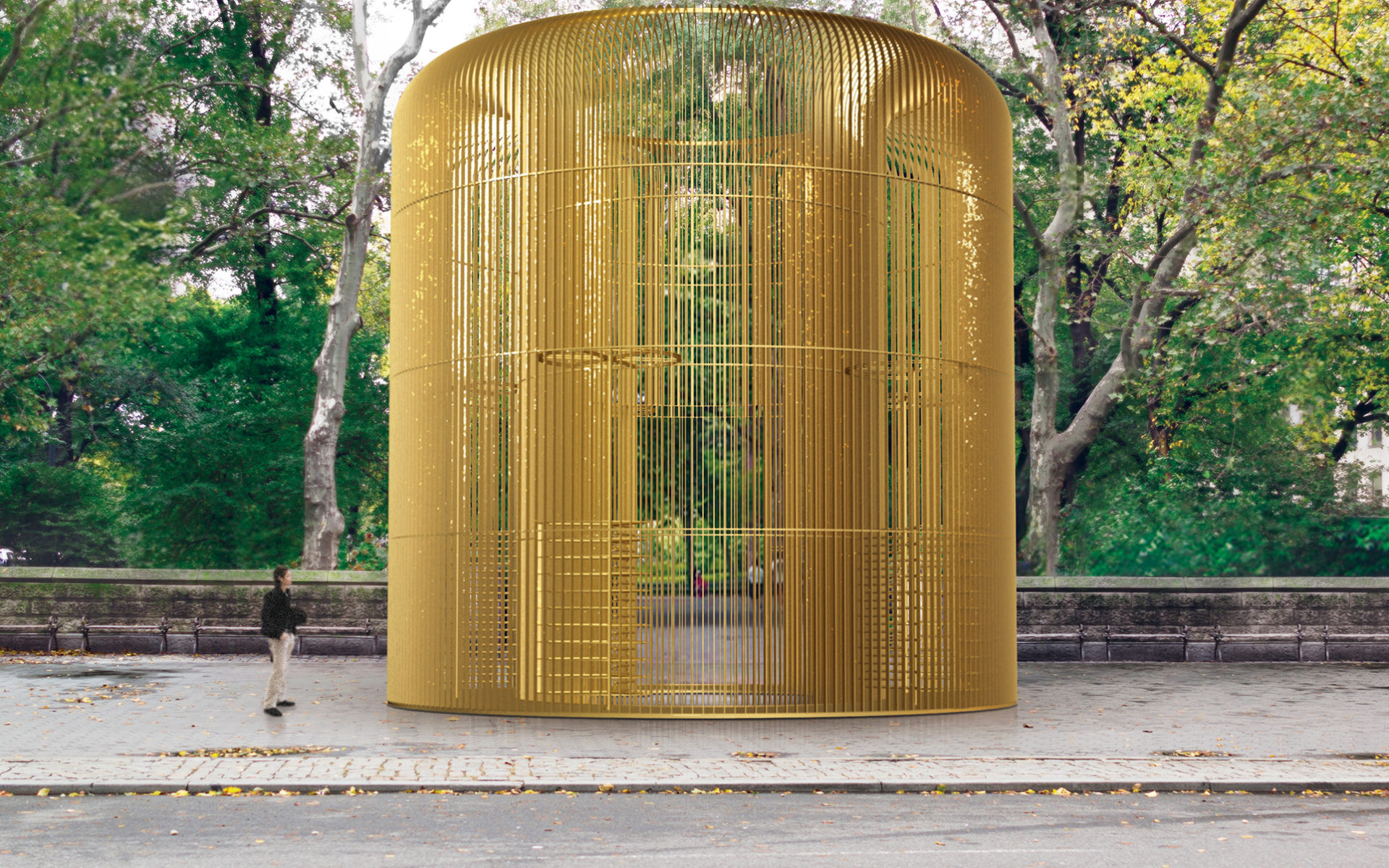 On October 12, visitors to New York’s Central Park can enter a gilded birdcage at the Doris C. Freedman Plaza. Bus shelters and LinkNYC kiosks will have documentary images from ​refugee camps and border crossings on their advertising platforms. Small interventions are built between and on top of private buildings, and lampposts are hung with banners featuring portraits of immigrants from different eras which will appear ​across all five boroughs. It’s all part of provocative Chinese artist Ai Weiwei’s citywide takeover for Public Art Fund’s 40th anniversary, comprising over 300 large-scale sculptures and smaller interventions. Years in the making, a public project of this scope relies on many municipal agencies for approvals and regulations. And while it hasn’t been entirely straightforward, the Washington Square Association, for example, protested Weiwei’s installation in the park’s archway earlier this month, the much-anticipated project is now just weeks away from opening.  Here, director of Public Art Fund Nicholas Baume, tells Galerie the fascinating backstory.

How is New York significant to Weiwei?

“In the 1980s Weiwei left a repressive Communist China to come here as a student. He went to Parsons, lived in the East Village, did portraits for people on the street, and worked different jobs. His biography is woven into the project, with site-specific interventions at the block he lived on, at 48 East 7th Street, and the places he occupied around the city.” A rendering of the controversial work at Washington Square Arch. Photo: Courtesy of Public Art Fund

Weiwei was very publicly detained in 2011 for his criticism of the Chinese authority. How did this affect the project?

“I first met with him in 2009 to discuss the project. I didn’t expect that Weiwei would soon be under house arrest, beaten, and have his passport taken. When he was allowed to travel again in 2015, he relocated his studio to Berlin, and every museum was knocking on his door. I invited him back to New York. We were in a coffee shop last spring, and he said he had an idea. He started drawing on a napkin, sketching out the skyline, and filling in the spaces with fences.” The artist at a refugee camp in Europe Photo: Matt Cardy/Stringer

What does concept of the fence entail?

“It came out of Weiwei’s research on the refugee crisis, and thinking about the rise of nationalism. The title, Good Fences Make Good Neighbors, is from a Robert Frost poem. He’s a very subtle and complex thinker. The fence can mean different things to people. If you’re bound by a fence, are you being protected or prevented? Does a fence seem natural or like it’s been put there as a brutal division? He’s conscious of how we define ourselves in relation to these abstract notions of nationality and property. Weiwei believes that the divisions we create can’t change the fact that we’re fundamentally the same. He didn’t want to create some annoying art installation that’s self-righteous, either—like, ‘here’s a fence, deal with it.’ While engaging in serious issues, the installations are interactive, immersive, and playful.”

“It’s been very exciting—seeing the way he keeps thinking through and elaborating on ideas. Given a background where his whole life has been being confronted with barriers, his way of thinking is how to creatively get around things. Anything that comes up as a problem, he turns into his advantage. He’s also a meticulous craftsman and designer. The fabrication of every detail is very carefully considered.” A rendering of a giant gilded birdcage in Central Park, part of the ambitious project. Photo: Courtesy of Ai Weiwei Studio

Is it art or activism?

“He believes all good art is political. But he doesn’t want to be limited to being a political artist. It’s interesting walking around the city together, and seeing how many people stop and say, ‘Your work means a lot to me. Thank you for what you’ve done.’ His activism, engagement, and example touch people beyond the art.” publicartfund.org

Don’t miss the talk with Ai Weiwei in conversation with Nicholas Baume on October 12 at the Great Hall of The Cooper Union.

Watch a video of the project here: