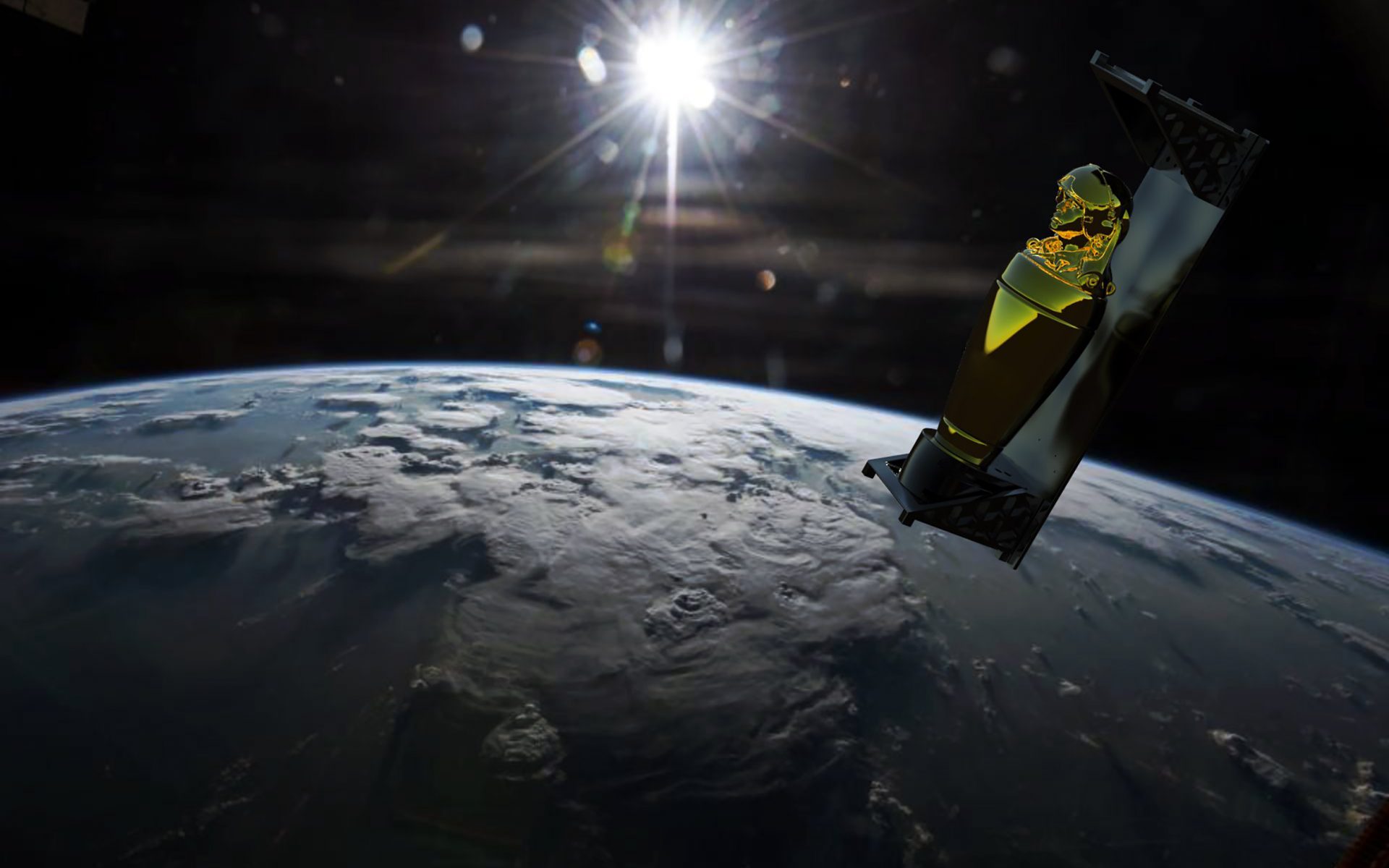 A rendering of "Enoch," Strachan's sculpture, in orbit.
Photo: Courtesy of the artist and Spaceflight / LACMA

The artwork, which honors a fallen astronaut, is set to launch aboard a SpaceX rocket on Monday

Just days out from the long-awaited launch of Trevor Paglen’s Orbital Reflector sculpture into space, the Los Angeles County Museum of Art has announced its plan to support the launch of a sculpture by the Bahaman artist Tavares Strachan. Both launches are planned for Monday, November 19, aboard SpaceX rockets.

The opportunity to work with SpaceX came via the Art+Technology Lab at the Los Angeles County Museum of Art, which awarded Strachan grant in 2014. Strachan worked with SpaceX’s president, Gwynne Shotwell to organize the launch of his project, a 24-karat gold bust of the late aerospace researcher and astronaut Robert Henry Lawrence Jr.

Lawrence was the first African-American astronaut to be selected for any national space program. He died in a supersonic jet crash before ever going into space. Though an accomplished Air Force pilot and the developer of the critical “flare” technique for space shuttle landing, NASA only acknowledged the extent of his contributions in 2017, on the 50th anniversary of his death.

Entitled Enoch, Strachan’s work references a Biblical figure who eluded a mortal death by transcending directly to the afterlife. The gold bust is combined with a base to resemble ancient Egyptian canopic jars, which preserved and protected the organs of the deceased for use in the afterlife. Strachan had the jar blessed at a Shinto shrine in Fukuoka, Japan, during which it was acknowledged as a container for Lawrence’s soul. “Tavares Strachan’s Enoch exemplifies the LACMA Art + Technology Lab’s mission to foster conversations between talented artists and leading technology companies to realize collaborations that would not be otherwise possible,” Michael Govan, LACMA CEO and Wallis Annenberg Director said in a statement. “Launching an artwork into space is a spectacular result of the program. More importantly, Tavares’s project justly honors an under recognized pioneer of NASA’s space program.”

This isn’t the first time the Bahamian artist’s work has explored the intersection of art and science. One of Strachan’s most iconic projects, The Distance Between What We Have and What We Want from 2006 consisted of a 4.5-ton block of ice. Harvested in a river near Mount McKinley, then shipped Federal Express to the Bahamas, it was exhibited in transparent, freezer at a primary school in Nassau, where solar power kept it frozen. Earlier this year, the Allen Institute, a center for bioscience research founded by the late Paul Allen, hosted him as its first-ever artist-in-residence.

The New York Times reported that Strachan has also built educational outreach into the project. He has installed “beacons” on the tops of school buildings in different countries, designed to light up whenever the satellite passes overhead.

The sculpture, which could orbit the Earth for up to 7 years, is set to be launched from a SpaceX Falcon 9 rocket currently scheduled to go up on Monday. SpaceX will provide a live stream of the rocket’s launch.

Cover: A rendering of "Enoch," Strachan's sculpture, in orbit.
Photo: Courtesy of the artist and Spaceflight / LACMA
Next Post