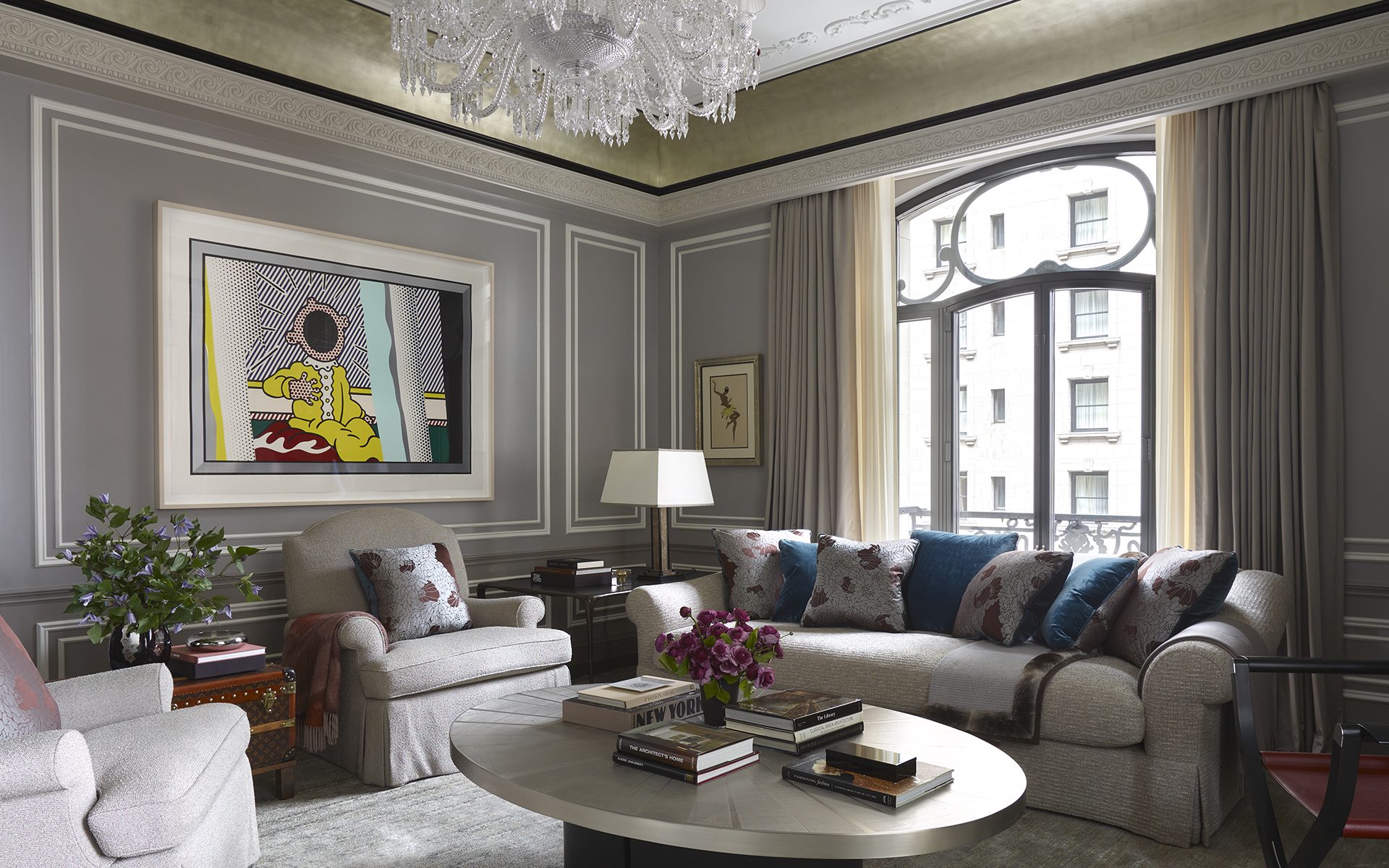 Suzanne Lovell Composes a Tranquil Apartment at the St. Regis for a Major Collector

The art-filled residence features remarkable architectural details, a thoughtful curation of fine furniture, and a cool palette of soft neutrals with moments of playfulness and whimsy 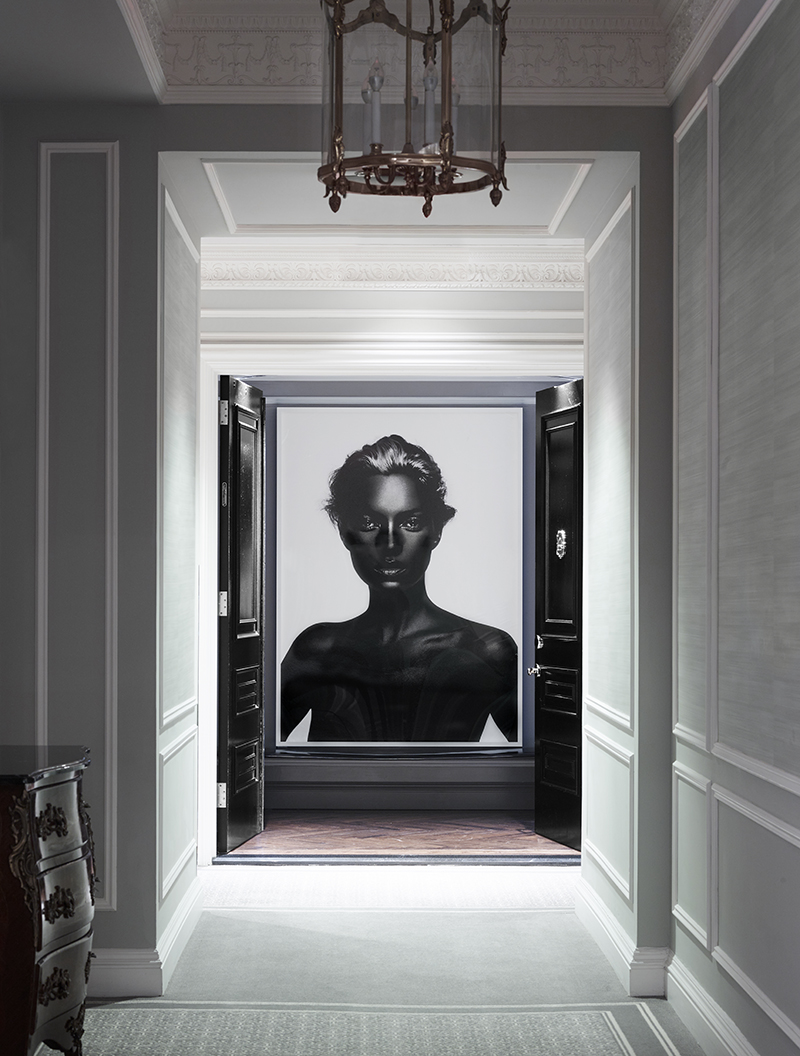 Black Kate by Nick Knight anchors the entry of a residence designed by Suzanne Lovell at the St. Regis in New York. Photo: Richard Powers

The classic idiom about not reinventing the wheel, just realigning it, rarely pertains to great interiors, where designers look to create unique spaces that speak to a homeowner’s individuality. But for Suzanne Lovell, working on a client’s third residence in New York’s famed St. Regis meant revisiting many of the elements that had made their first two projects together so successful. “She already knows that I’m going to go towards preserving the French Beaux-Arts architecture,” the Chicago-based architect and designer tells Galerie. “We’re respecting that and bringing it into a contemporary world.”

After completing two renovations within the building, Lovell approached this project—a combination of two suites—with the same gusto, replacing flooring, lighting, and more to elevate the space to the exacting expectations of a seasoned art collector. “Everything is new,” says Lovell, who reconfigured the floor plan to create three bedrooms with space for an office. “I think the difference that we bring to any project is not only that we have this ability to research and create dialogue for art, but that we’re architects first. I’m alway going to be about the architectural finishes.” 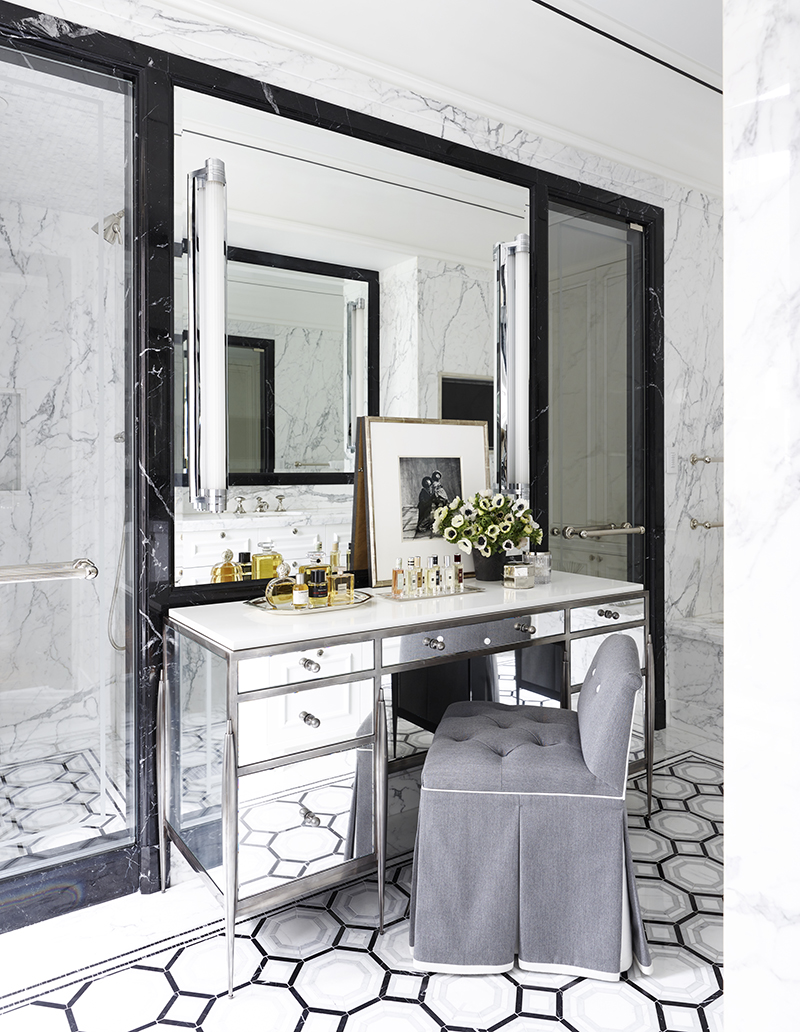 The residence features his and her baths utilizing Waterworks mosaics and stone; this space for her also features a mirrored vanity topped with Cuzco Children (1948) by Irving Penn. Photo: Richard Powers

After first addressing the structure and the function of the home, Lovell created a cohesive design featuring a neutral palette of black, white, and gray, most strikingly in the glamorous bath that features a bold hexagon-patterned stone floor. (The the remainder of the residence is paved in a classic walnut herringbone.) “We knew that a strong floor was going to be a grounding mechanism in the space,” she explains. 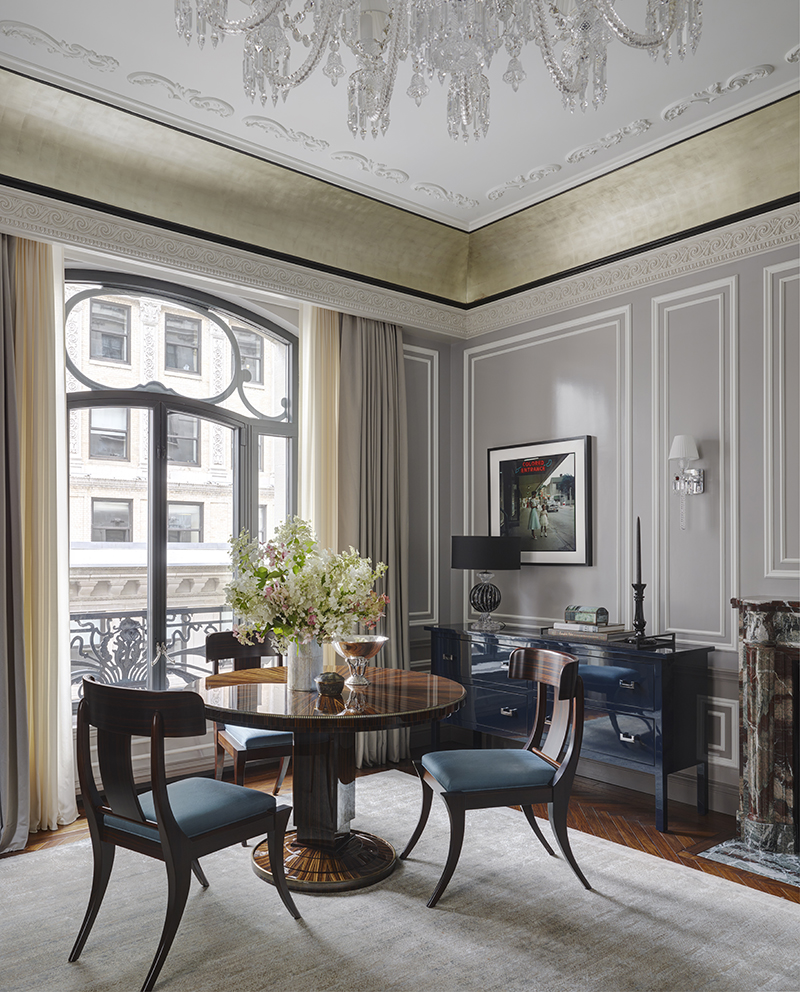 A custom Frank Pollaro pedestal base table in Macassar ebony with ebony and ivory inlay and matching dining chairs, upholstered in Hermès fabric, rest upon a wool and silk rug by Oscar Isberian in the living room that also features Department Store, Mobile, Alabama (1956) by Gordon Parks over top a rich blue credenza. Photo: Richard Powers

The soft grays of the living room are given dimension through the layers of textures—a sturdy textile on the traditional armchairs and sofa, a wool and silk rug by Oscar Isberian, a sleek glass Baccarat chandelier with pleated silk shades. Pops of color appear in a Hermès folding chair with deep red leather seat, a pair of custom Frank Pollaro dining chairs upholstered in a rich peacock-color Hermès fabric, a work on paper by Jean-Michel Basquiat, and a Roy Lichtenstein lithograph entitled Reflections on The Scream (1990). “In a holistic way, we were thinking about the balance of the artwork and the floor, about the balance of the color and materials,” says Lovell. “We’d be working on the balance of color in three dimensions and asking how do we bring warm and cool colors together to give confidence and comfort inside the space.” 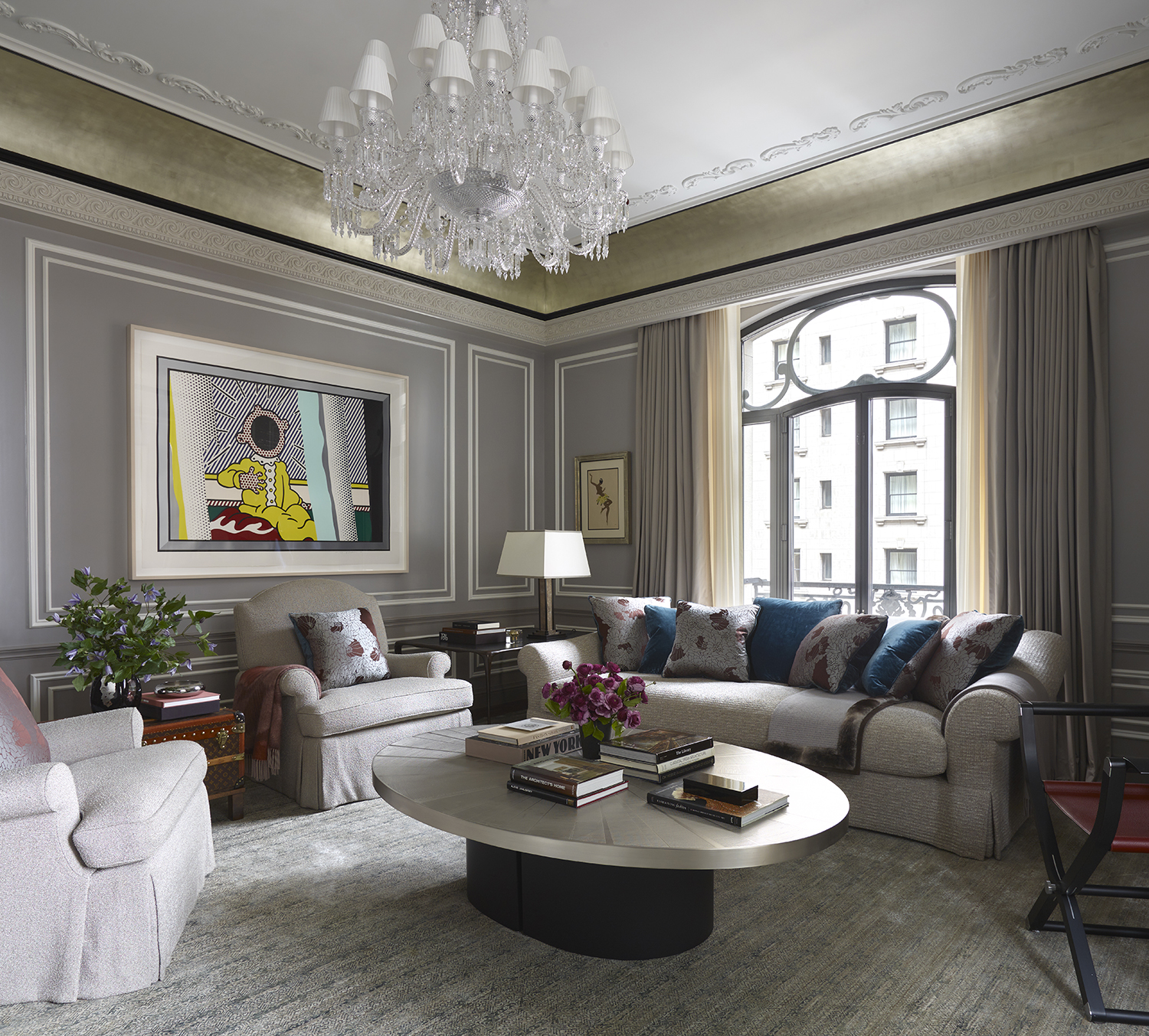 "This is my favorite Lichtenstein in the whole world," says Lovell of the work, Reflections on The Scream (1990), that's displayed in the living room that also features a Paul Mathieu side table in bronze from Ralph Pucci and Baccarat chandelier. Photo: Richard Powers

A similar aesthetic carries over into the study, where another Hermès Pippa folding arm chair is coupled with the atelier’s Metiers desk by Enzo Mari, both featuring a cherry-red leather. In this room, another Baccarat chandelier features gleaming bursts of red, while a cashmere rug by Oscar Isberian provides luxury underfoot. A ghostly work by Key-Sook Geum (one of several pieces by the Korean-born artist featured in the client’s collection) dances between Jouffre drapes. “The quietness of that as a background was appropriate for someone who is very fashionable,” says Lovell. “The subtle sophistication was the most important.” 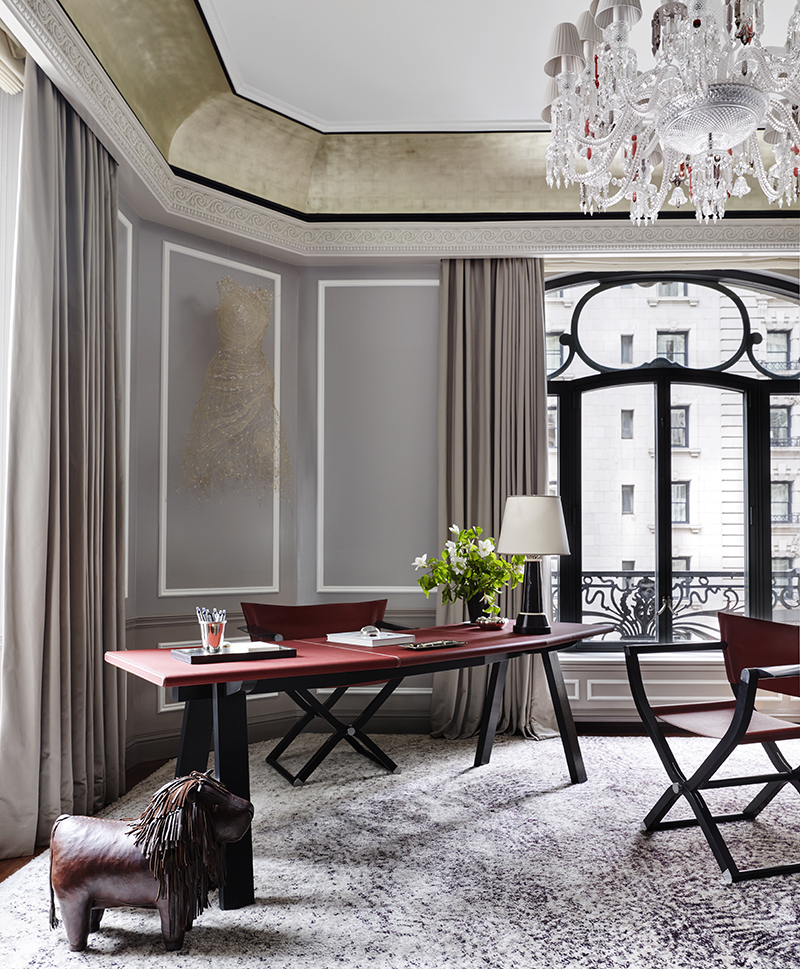 In the study, Web Dress I (2003) by Key-Sook Geum backs a Metiers leather desk and Pippa folding arm chairs from Hermès; the cashmere rug is by Oscar Isberian. Photo: Richard Powers

In the serene main bedroom, the muted tones take an elegant turn when paired with a jet black Baccarat chandelier and high-gloss bedside tables topped with a set of sculptural lamps. A pair of cast-bronze Liaigre benches is surmounted by an Irving Penn photograph. Just beyond the door, a plaster work entitled Little Ida by Charles Calverley was one of the collaboration’s moments of serendipity: Lovell discovered it an art fair and immediately texted her client to expound its virtues only to learn the homeowner had already purchased the piece. 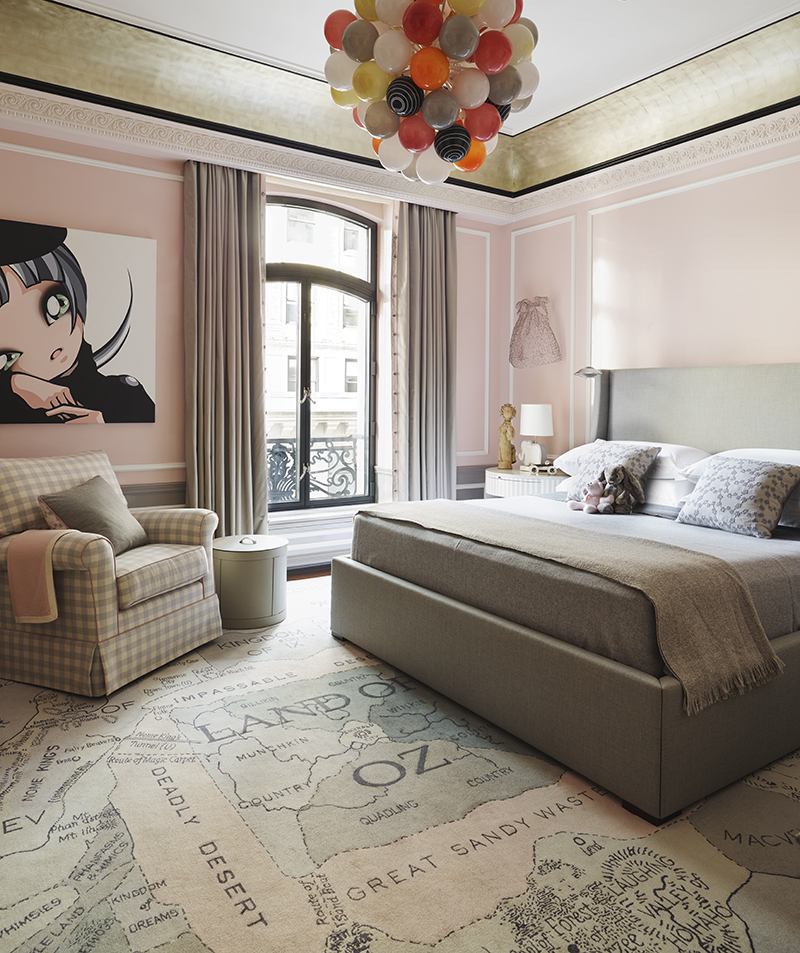 A handmade rug featuring a map of the Land of Oz anchors the daughter's bedroom that includes artworks by Hiroyuki Matsuura and Kristine Mays. The custom glass balloon chandelier is fabricated by Michael Davis Glass and the drapery is from Jouffre. Photo: Richard Powers

The home’s strongest color moment happens in a bedroom conceived for the homeowner’s daughter. The walls, sheathed a romantic seashell pink, are echoed in a painting by Hiroyuki Matsuura, a sculptural work by Kristine Mays, and a custom chandelier that features a cluster of handblown glass orbs in white and gray but also red, orange, black, and gold. The client has a custom rug featuring a map of Milan in one of her other St. Regis residences, so the designer selected a handmade one by Hokanson for this space that features the Land of Oz.

“There’s a consistency—you still feel like you’re in the same house,” says Lovell. “There are threads that follow through. It’s a sophisticated, large pied-à-terre in New York City—you’ve got to have a little fun.” 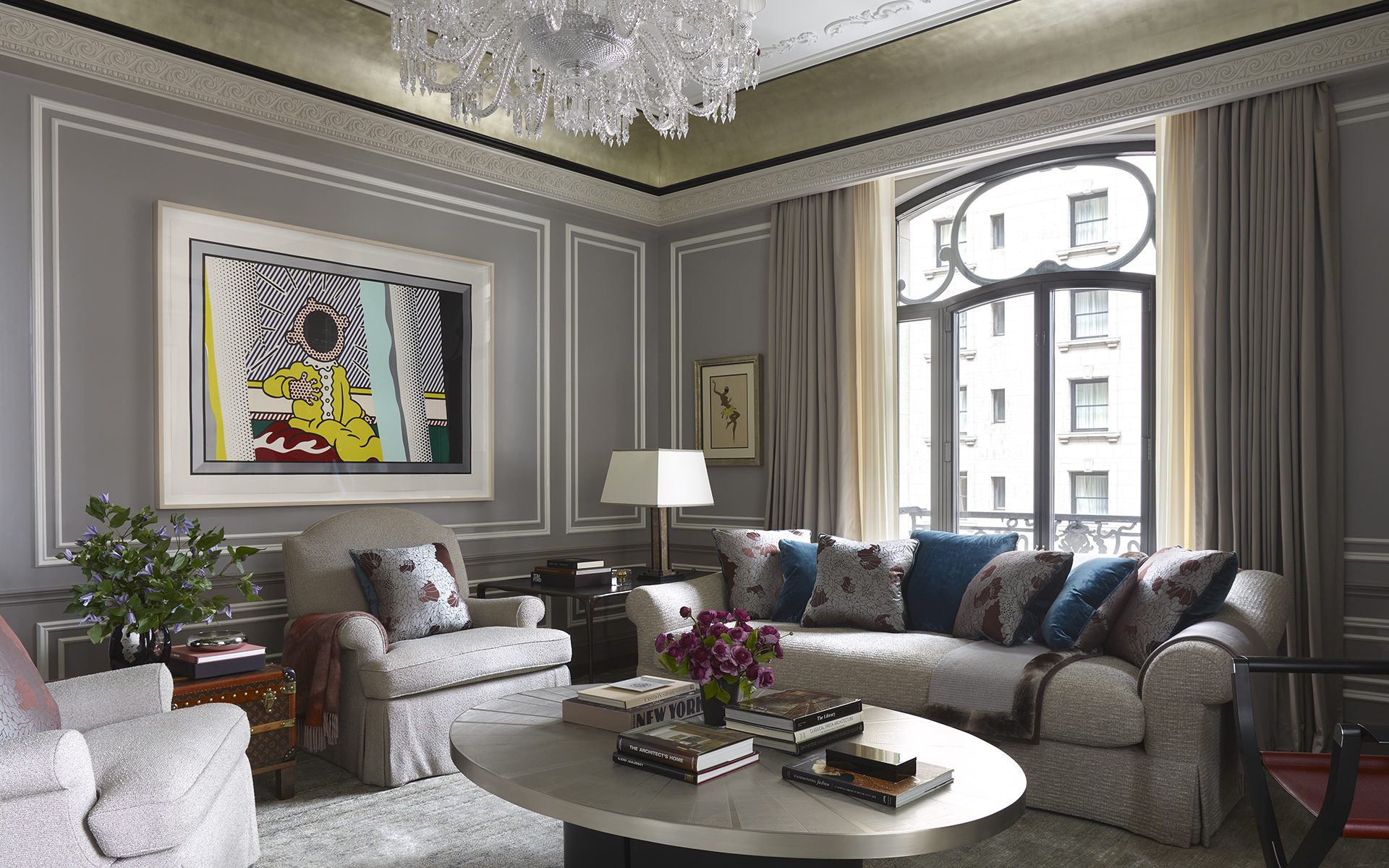