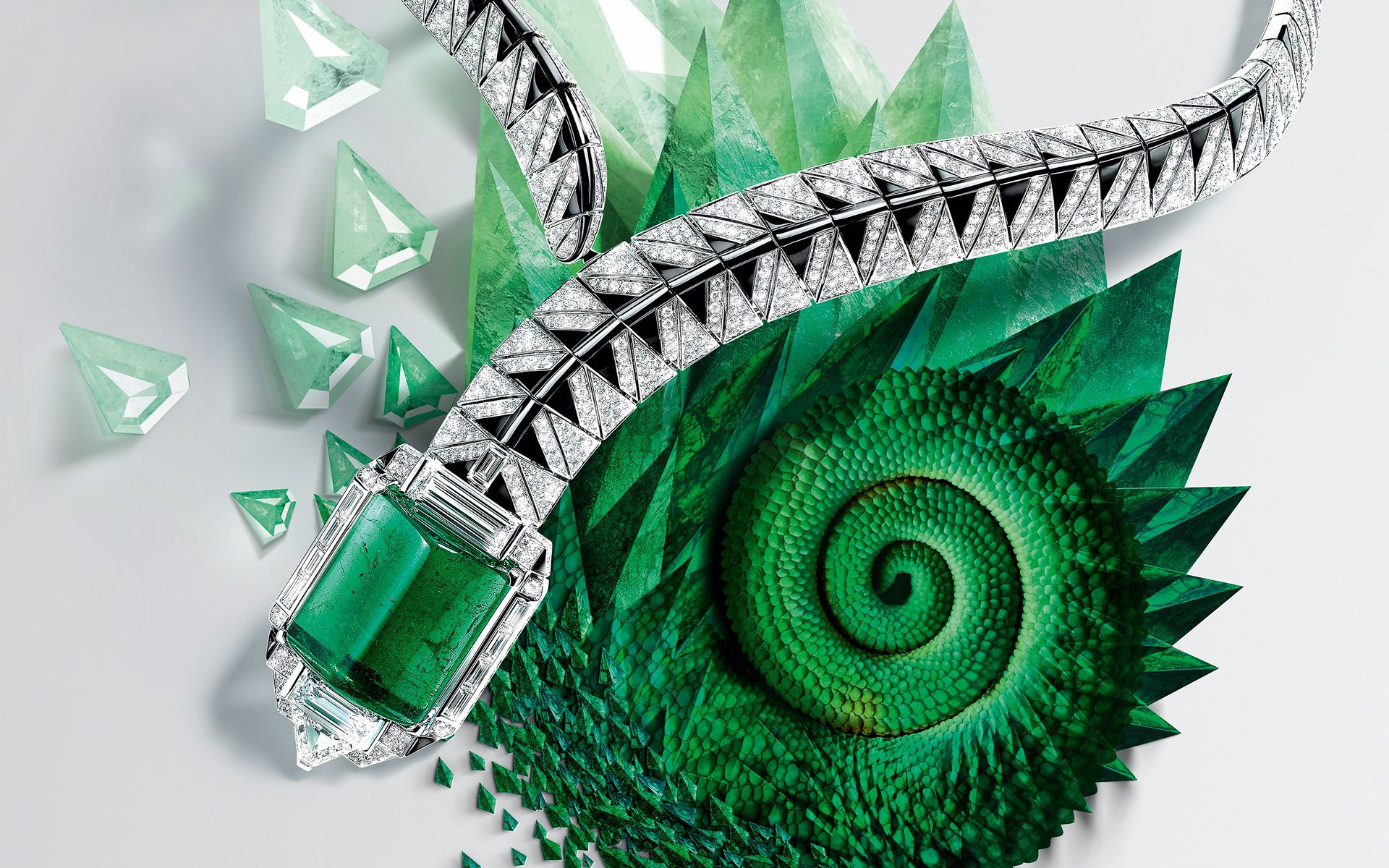 The Most Jaw-Dropping High-Jewelry Collections Revealed This Month 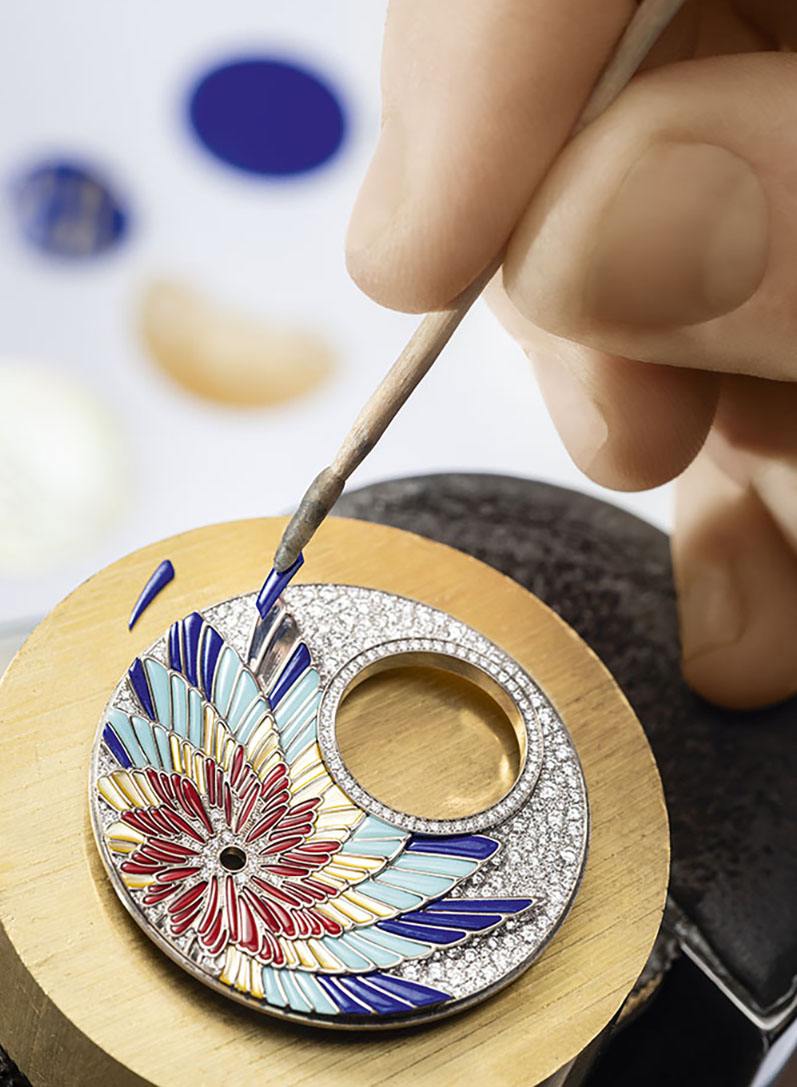 An artisan from Piaget working on a piece from the Wings of Light collection. Photo: Courtesy of Piaget

The first week of July is usually a special time of the year when the world’s high-fashion houses and storied jewelry maisons converge in Paris to unveil their exceptional haute couture and haute joaillerie presentations. But as with almost all cultural events scheduled this season, the ongoing Covid-19 pandemic has meant the week was forced to be canceled. While a number of brands decided to postpone the release of their new pieces until the fall, others have gone to great—and creative—lengths to present their collections to editors and clients virtually.

Haute Couture Week is considered an important opportunity for brands to showcase their expertise and savoir faire. Using the highest form of craftsmanship and important stones, the ateliers  produce dynamic, one-of-a-kind designs. Often without time limitations—the collections can take years to create—or budget constraints, the pieces are as close to pure art as it gets. And while nothing can replace the effect of seeing a rare gemstone catch the light in person or the tactile sensation of a necklace’s articulations, the digital showings still managed to capture the magic, fantasy, and storytelling that is haute joaillerie. Below, we share some of the most jaw-dropping introductions. 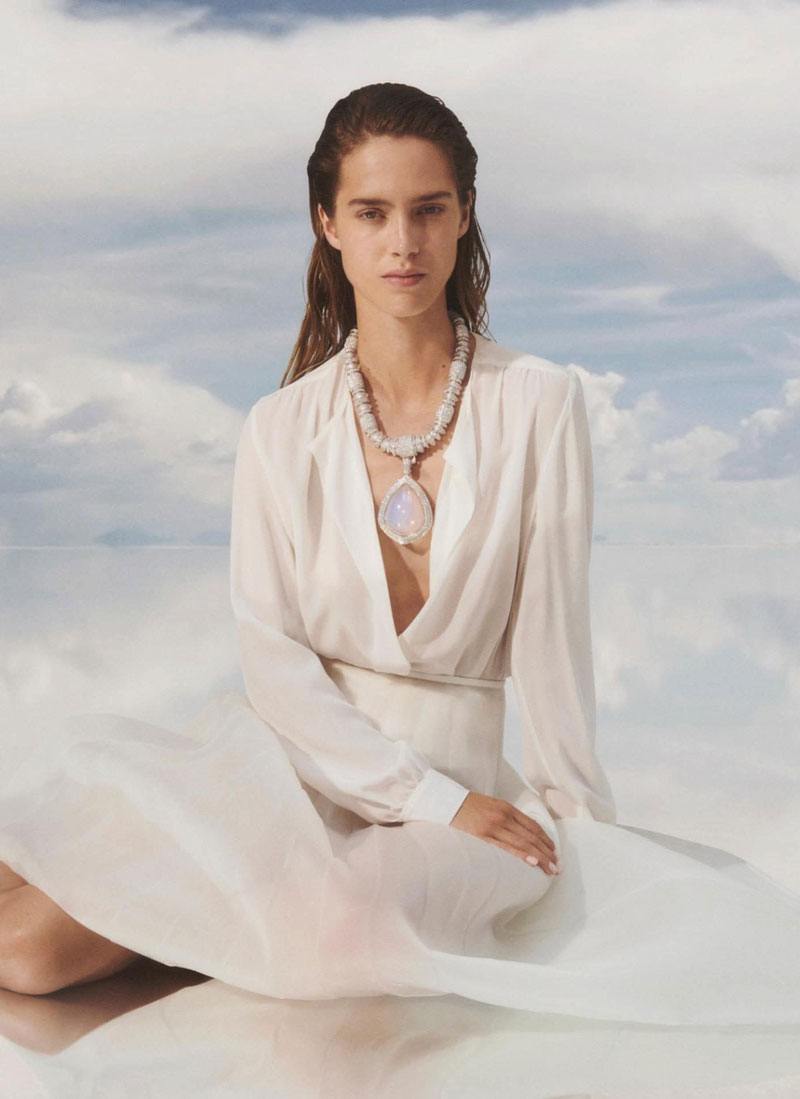 A model wearing Boucheron's Goutte de Ciel necklace in rock crystal and paved with diamonds, set with a drop of rock crystal in aerogel, in white gold. Photo: Courtesy of Boucheron 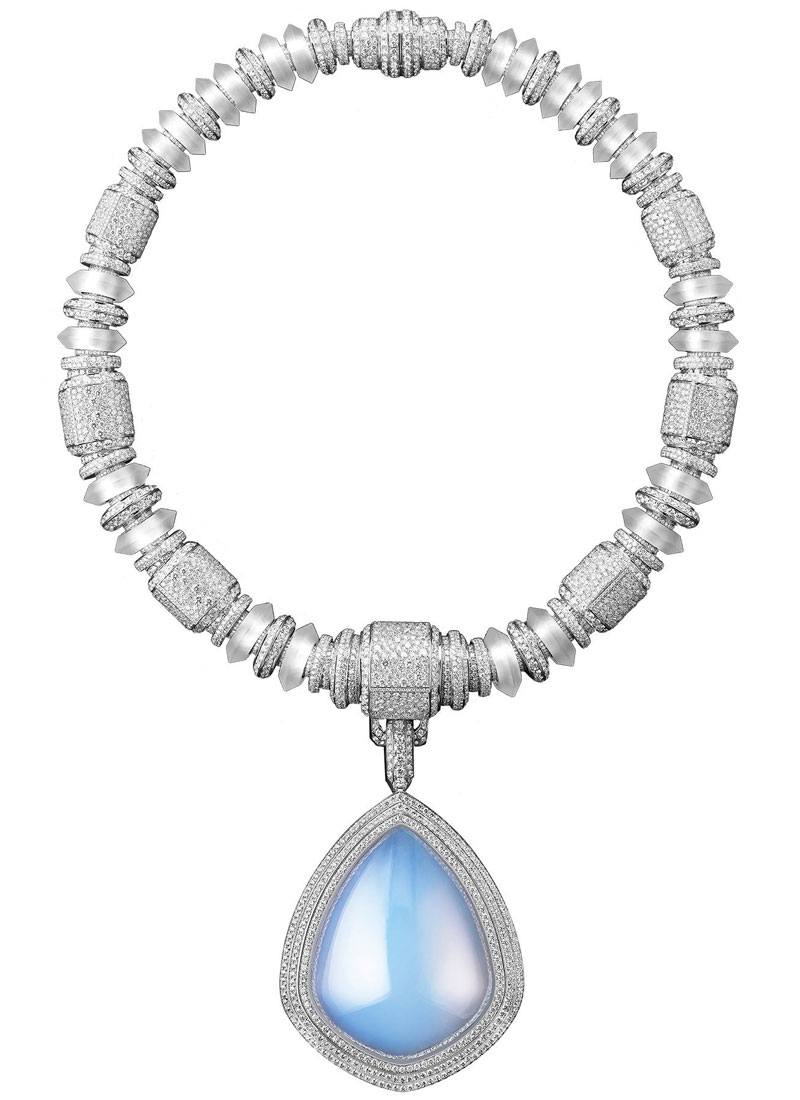 The oldest jewelry house in Paris’s Place Vendôme has created the most cutting-edge, forward-thinking collection of them all. Titled Contemplation and conceived by the maison’s creative director, Claire Choisne, the array was designed to capture the ephemeral and convey the poetry of present moments. To do so, Choisne sought high-tech materials from the worlds of engineering and technology, then combined them with traditional jewelry-making techniques. The pièce de résistance is the Goutte de Ciel necklace, which she describes as “a piece of sky you can wear around your neck.” To achieve the desired effect she worked with an opalescent aerogel developed by NASA (normally used to gather stardust for analysis) encased it in rock crystal and suspended from a diamond and crystal collar. 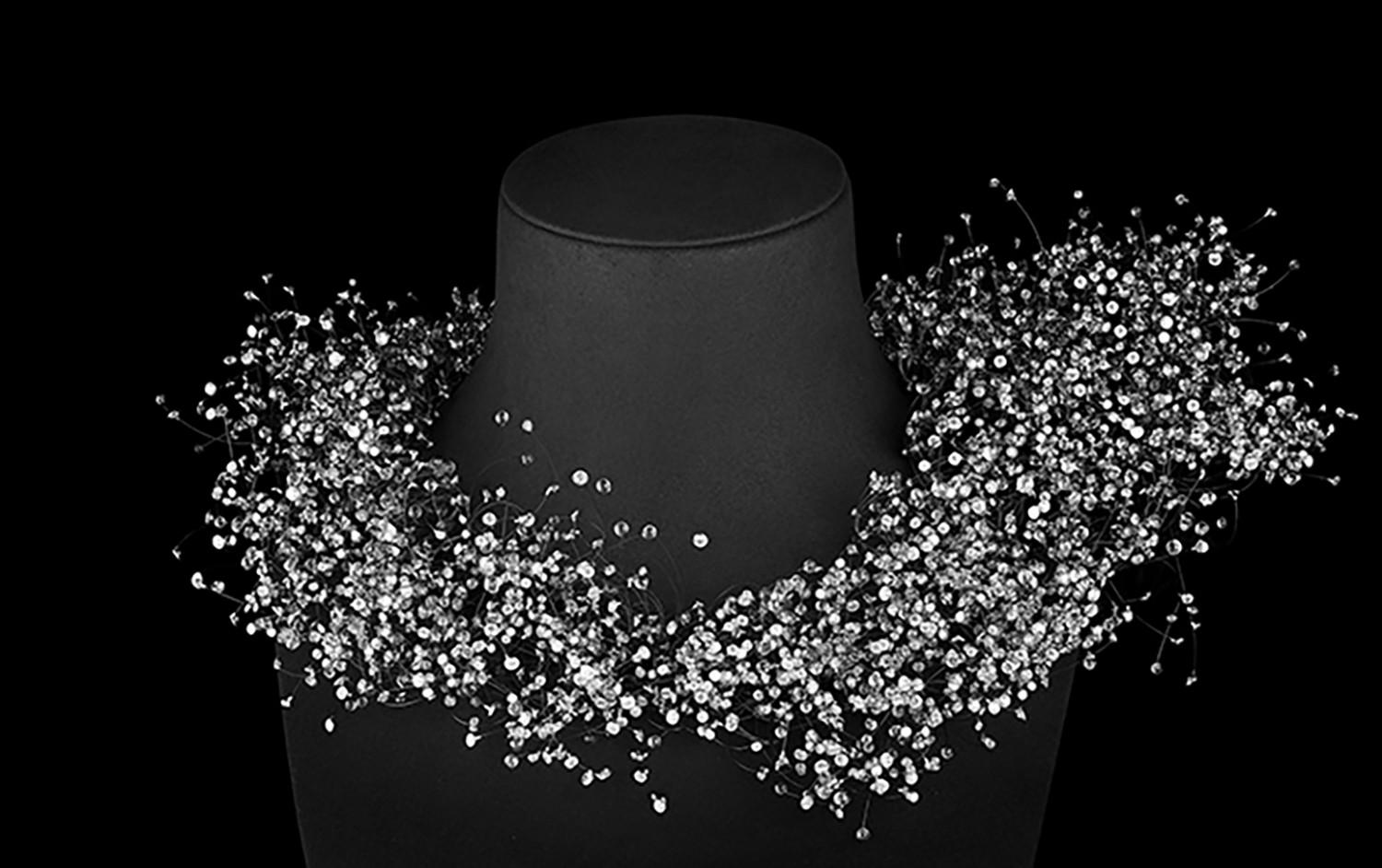 Another masterpiece is the Nuage en Apesanteur, made with white gold, 10,000 titanium beads, 4,018 diamonds, and hundreds of glass beads simulating droplets of water, designed to evoke a cloud floating around the wearer’s throat. The maison consulted a programmer to bring this unique creation to life, working for around two years to develop the materials. 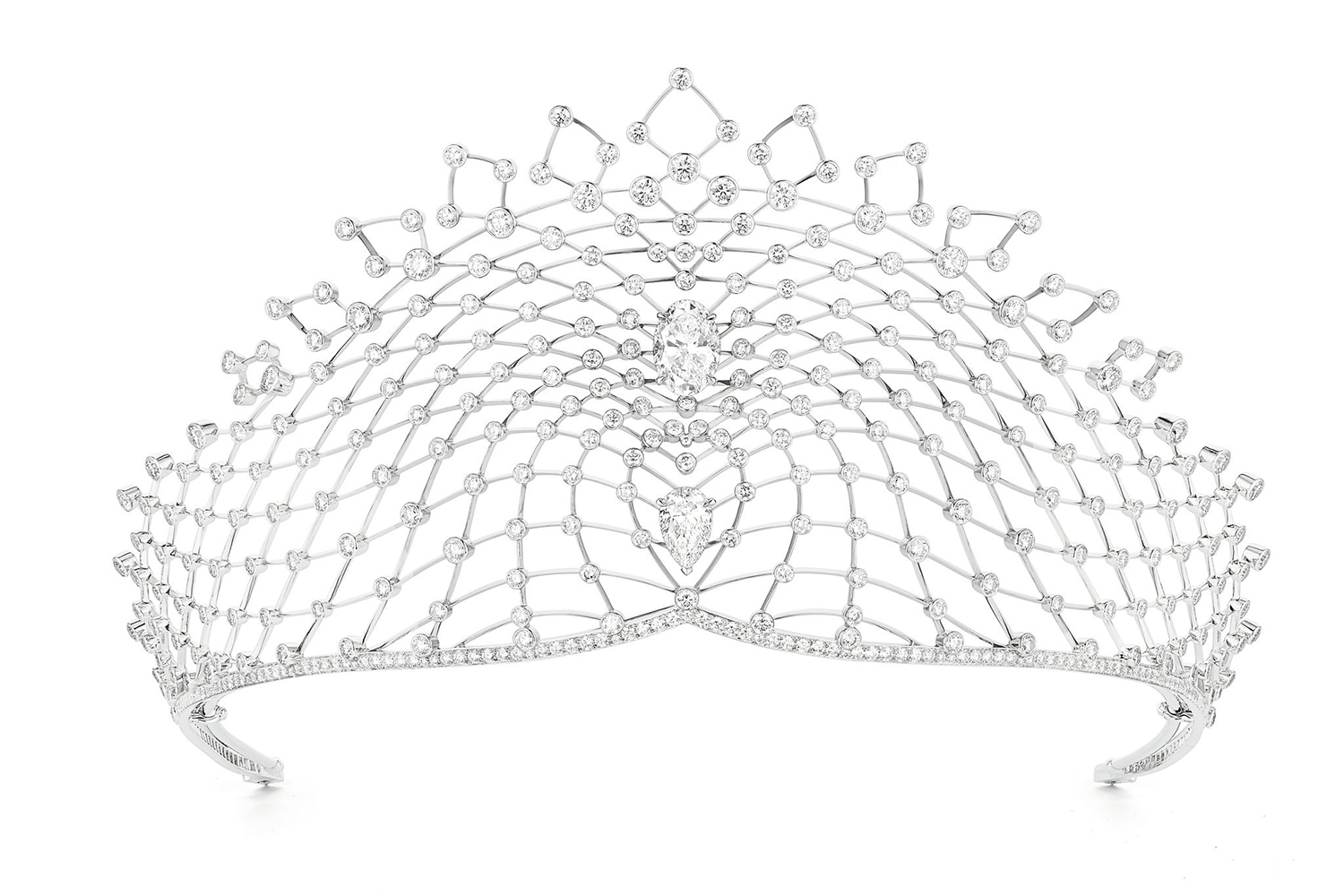 For the past 240 years, the storied Place Vendôme maison Chaumet has drawn on architecture as a central source of inspiration, and its latest high-jewelry collection, Perspectives de Chaumet, takes it to new heights with 81 modernist-infused pieces. Best known for aristocratic tiaras (the brand has made over 2,000 since 1780), Chaumet boldly reimagines the traditional head jewel for the 21st century.  The stunning Lacis tiara, for example, makes use of its signature fil couteau, or knife-edge setting, and latticework to create a dazzling optical illusion of floating diamonds. Another highlight is the Brualist-looking Skyline ring, boasting a 7.34-carat, D-Flawless, type IIa Asscher-cut diamond in the center. Because of the recent closures in Paris, the workshop has completed just 38 styles for the collection while the remainder will be revealed in September. 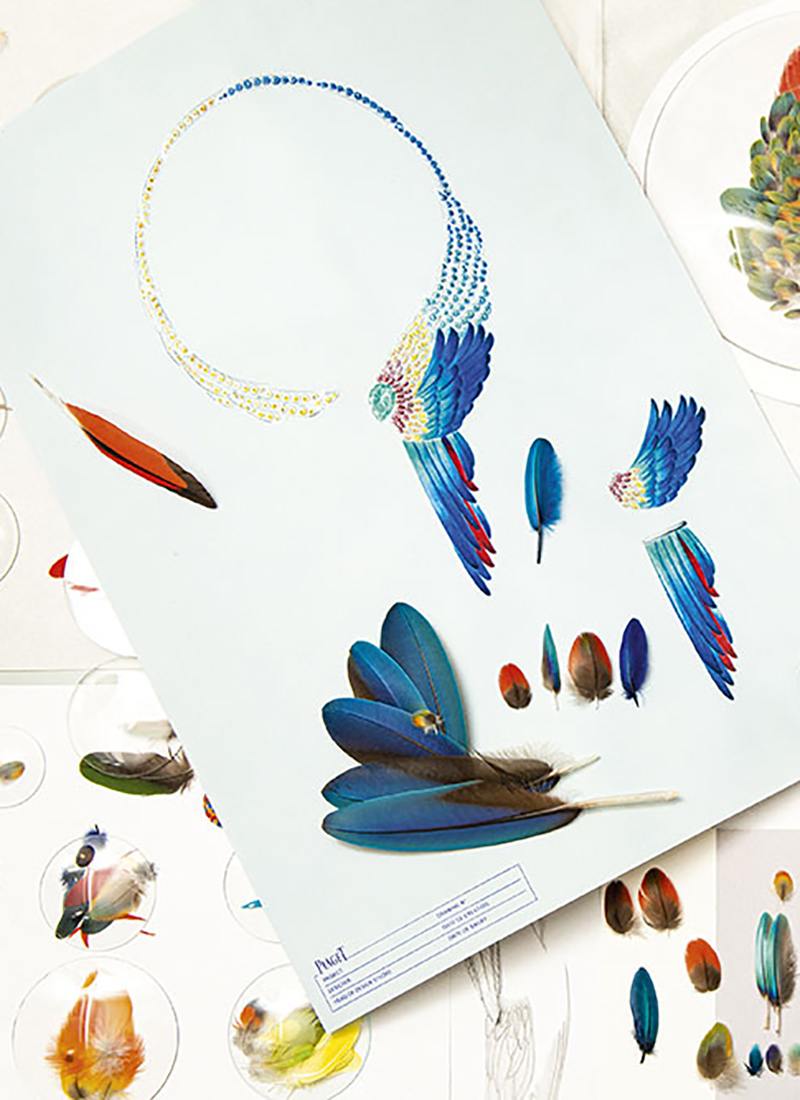 A gouche sketch for Piaget's Wings of Light collection. Photo: Courtesy of Piaget 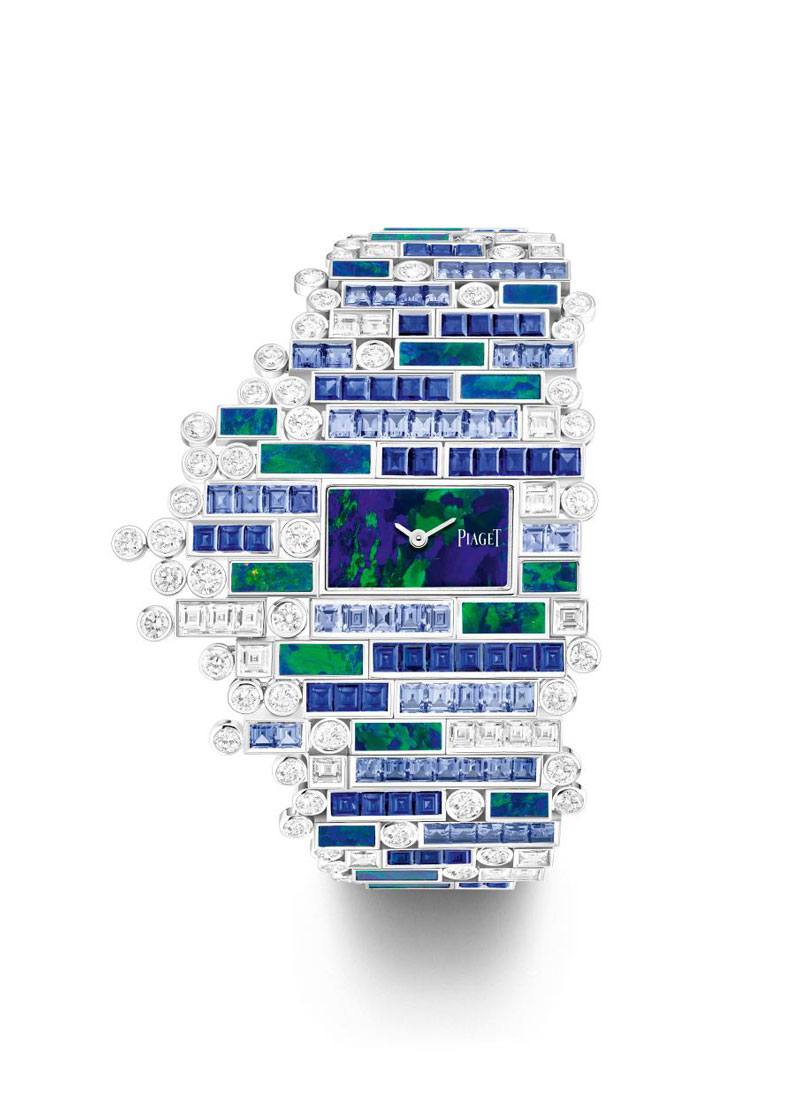 The latest high-jewelry collection from Piaget taps into our collective desire to escape to a tropical oasis. Dubbed Wings of Light, the cache—inspired by the magic of nature—was conceived by Christophe Bourrie, who joined the brand last summer to direct its high-jewelry offering. Standouts include a suite of delicate feathered creations in jewel-like tones, such as a striking asymmetrical necklace inspired by the shape of an exotic bird’s wing. Known for partnering with independent makers, Piaget tapped Nelly Saunier, a specialist in the 16th-century craft of plumasserie, who matched blue, turquoise, red, and yellow feathers with rare multicolored stones. (The feathers can also be removed and worn as earpieces.) The Secret Cenote cuff-style watch—a nod to Piaget’s horological heritage—features a dial of Australian black opal with a striking tessellation of diamonds, opals, and blue sapphires from Sri Lanka and Madagascar, evoking a shimmering pool. Rose Saneuil, a master of wood marquetry, worked on the final sunset-inspired chapter. 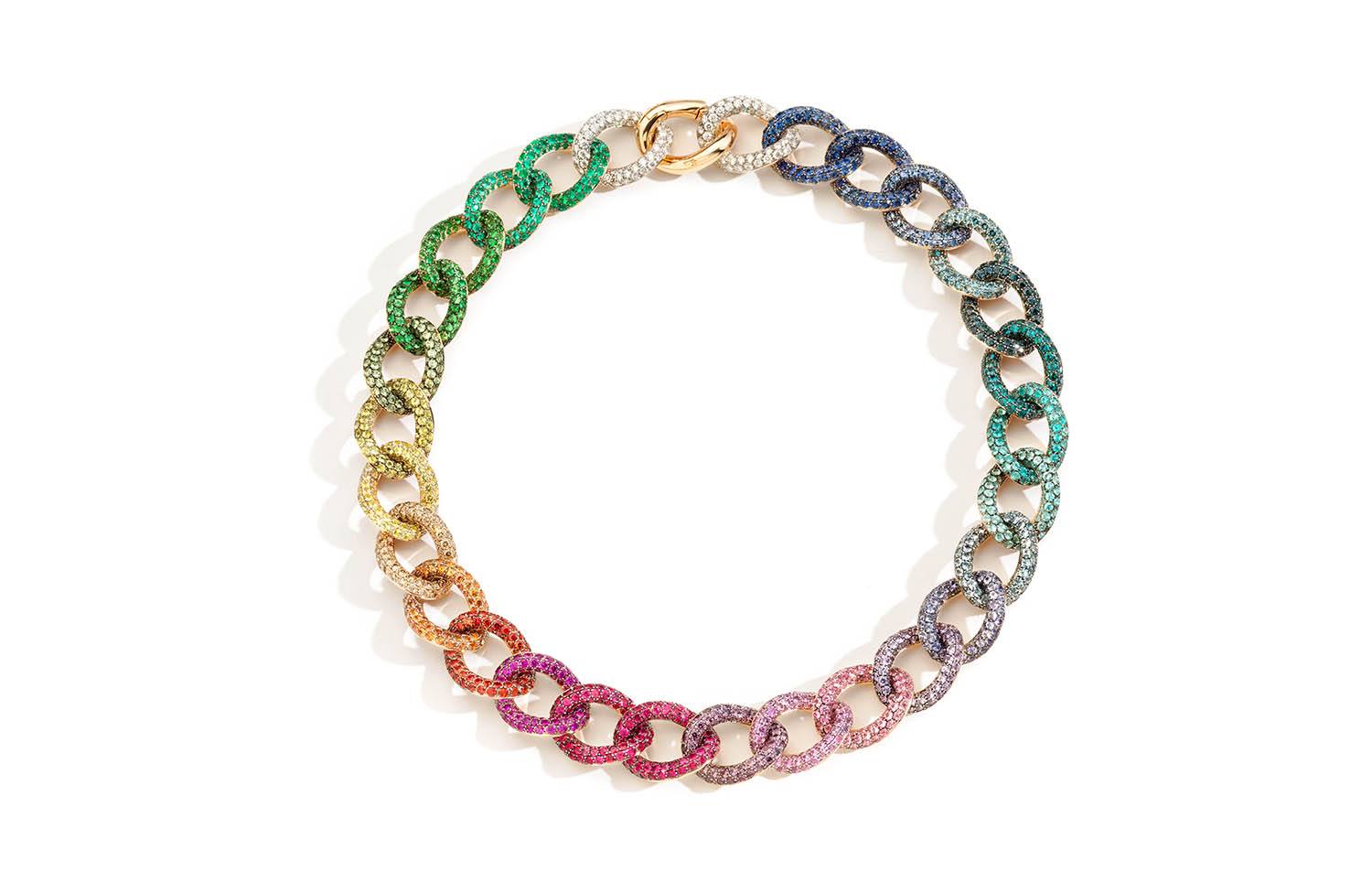 For Pomellato’s debut in the world of high jewelry, the Italian jewelers present La Gioia, a whimsical collection of 165 pieces defined by bursts of rainbows, surprising volumes, and masterful gem-setting techniques. The quintessential Pomellato chain got an artful twist with the addition of precious stones in the most tantalizing hues. The showstopper is surely the Gourmette Caméléon choker necklace. To create the 27 gradient shades, a staggering 1,798 gems, including sapphires, emeralds, aquamarines, topaz, and diamond, were pavé-set across the 29 rose-gold links. The brand also gave its signature Sabbia range the high-jewelry treatment with the Sabbia Flamingo set of earrings and multipendant necklace. Grainlike dots of pale pink sapphires and pink-red rubies in a sertissage setting create a dazzling ombré effect. 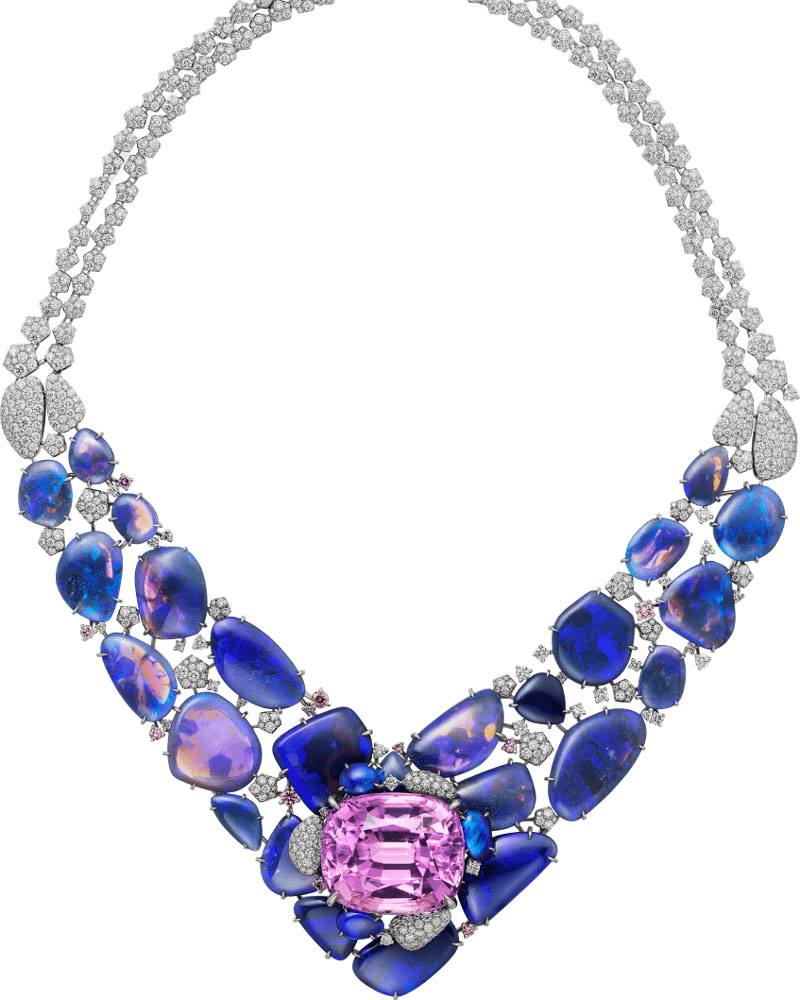 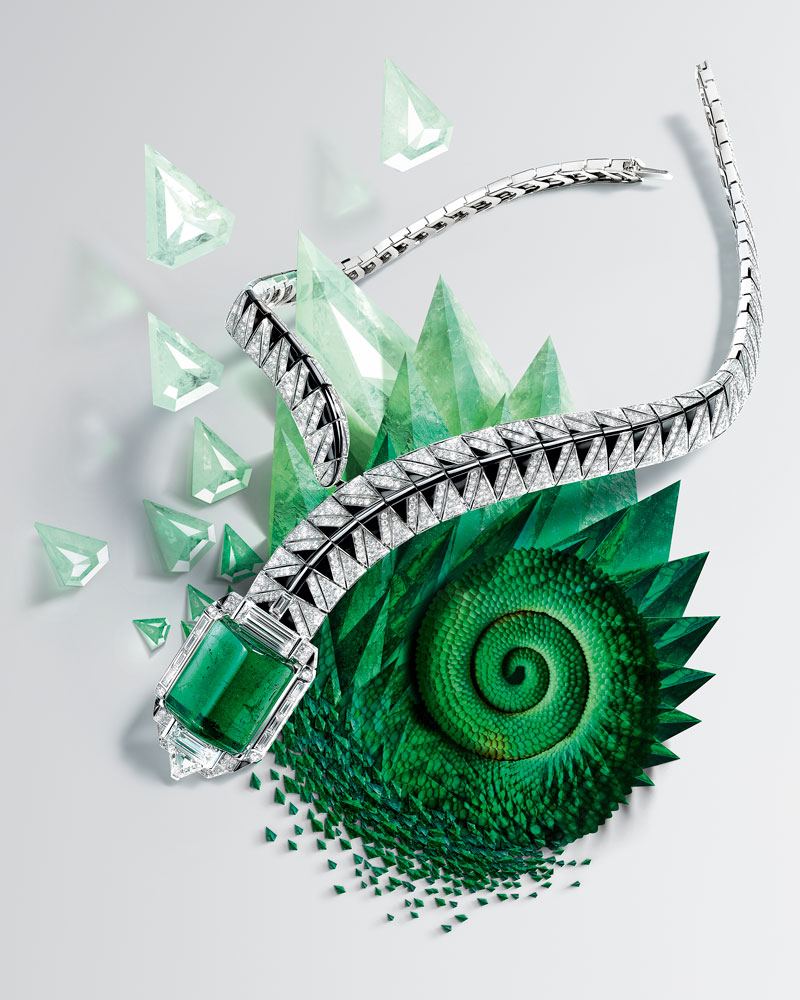 A psychedelic, abstract take on the traditional theme of flora and fauna, Cartier’s new [Sur]naturel collection is described as “nature that is more real than nature itself.” With an emphasis on the power of stones, some of the unusual pairings include rare diamonds, emeralds, and sapphires teamed with opal and kunzite, coral, aquamarine, and quartz. The necklaces are the standouts of the collection: The Hemis, for example, is a novel interpretation of the panther, the beautiful creature most closely associated with the house of Cartier. Here, organically shaped black opals cluster like pebbles around a showstopping 71.08-carat cushion-shaped kunzite centerpiece. The iconic serpent also gets the supernatural treatment in the Opheis necklace, where the form becomes an asymmetrical design centering on a giant cabochon emerald while overlapping diamonds evoke the texture of snakeskin. Buccellati, which just celebrated its 100th year, paid homage to its heritage in a new 30-piece collection based on house signatures like the lacy Honeycomb line, which is now offered for the first time in rose gold. Still using time-honored techniques dating back to the Renaissance, the brand’s artistic director, Andrea Buccellati, hopes the one-of-a-kind pieces will enrich the collections launched by his father, Gianmaria Buccellati, during the 20th century. One eye-catching piece is a white-gold bangle set with 1,049 brilliant-cut diamonds and 12 large oval-cut stones, totaling more than 15 carats. A work of art, it took the master artisans more than a year to make. 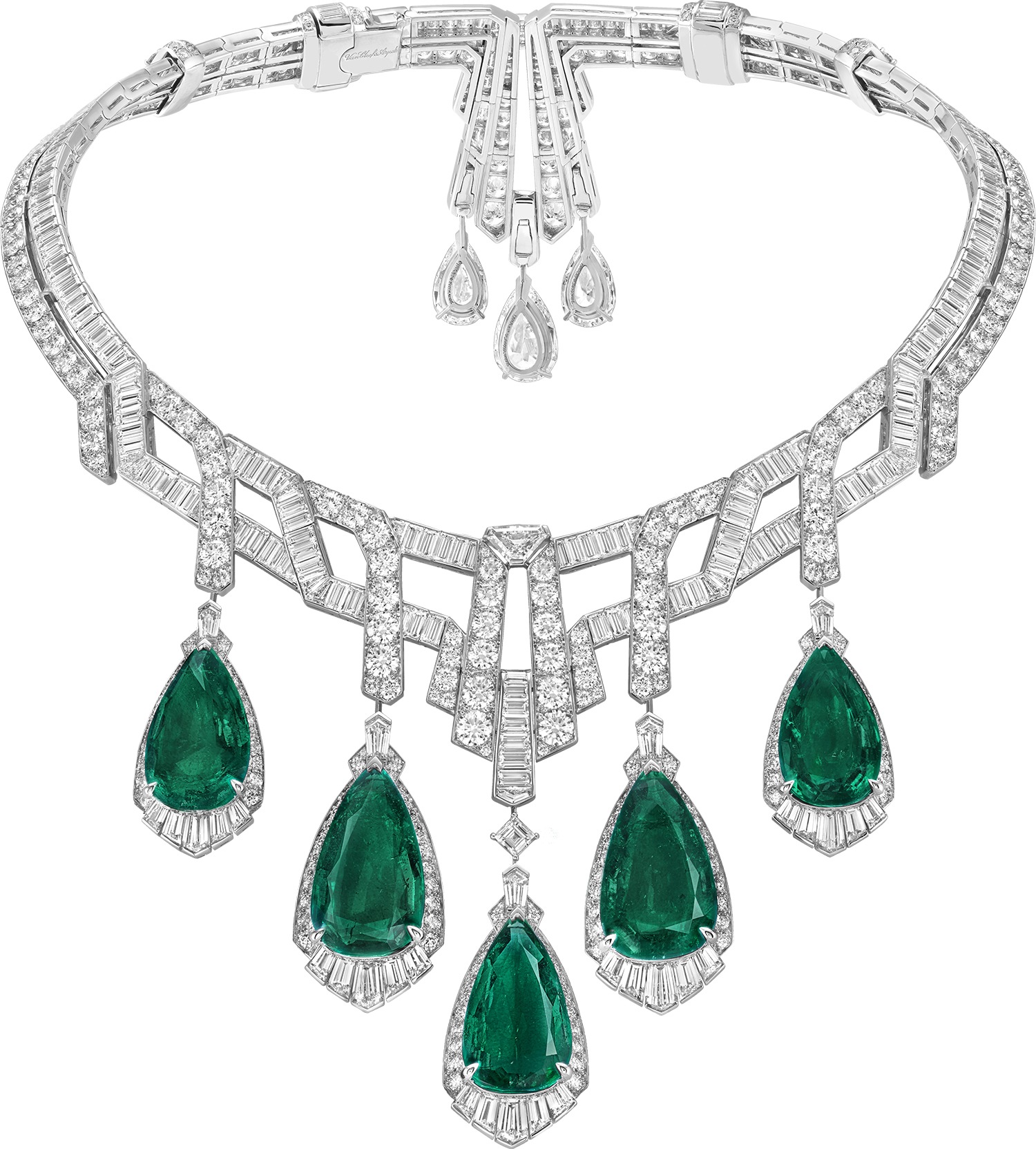 The French jewelry house is postponing its new high-jewelry collection until July 2021, when things have returned to normal. Instead, it used the opportunity to showcase a selection of three new pieces inspired by heritage jewels owned by the brand’s leading clients. Standouts include the Rubis en Scène  bracelet, which features  72 rubies, and the Art Deco–inspired Merveille d’Emeraudes necklace with five emeralds weighing a total of 70.4 carats. The house is also in the midst of preparing for an exhibition, “Pierres Precieuses,” in partnership with the National Museum of Natural History in Paris. With a focus on the intersection of science, mineralogy, and jewels, the presentation will feature some 300 creations from the Van Cleef archives, institutions, and private collectors, and will open to the public on September 16. 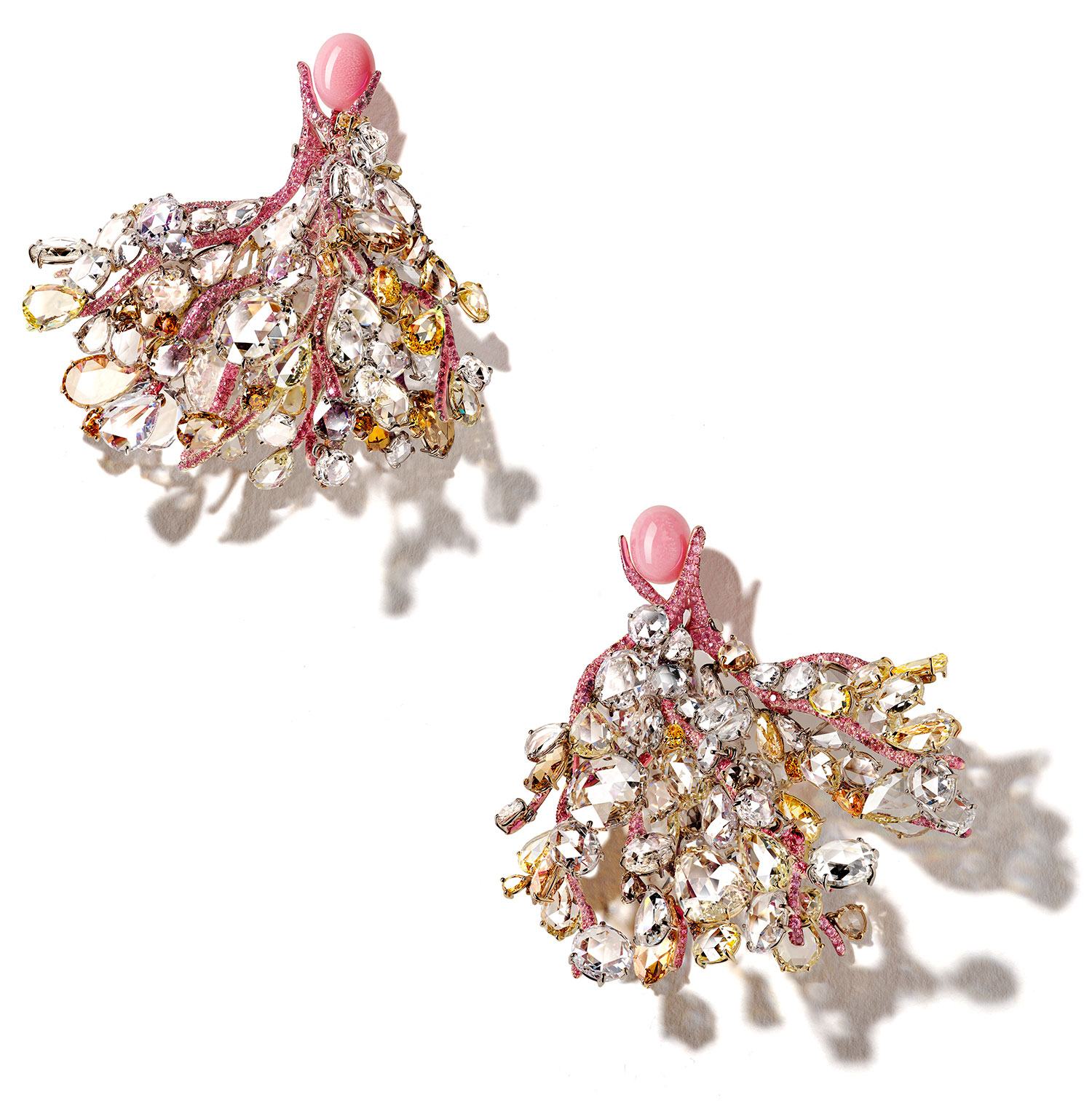 Cover: A gouche illustration of Cartier's Opheis necklace from the brand's [Sur] Naturel collection.
Photo: Courtesy of Cartier
Next Post