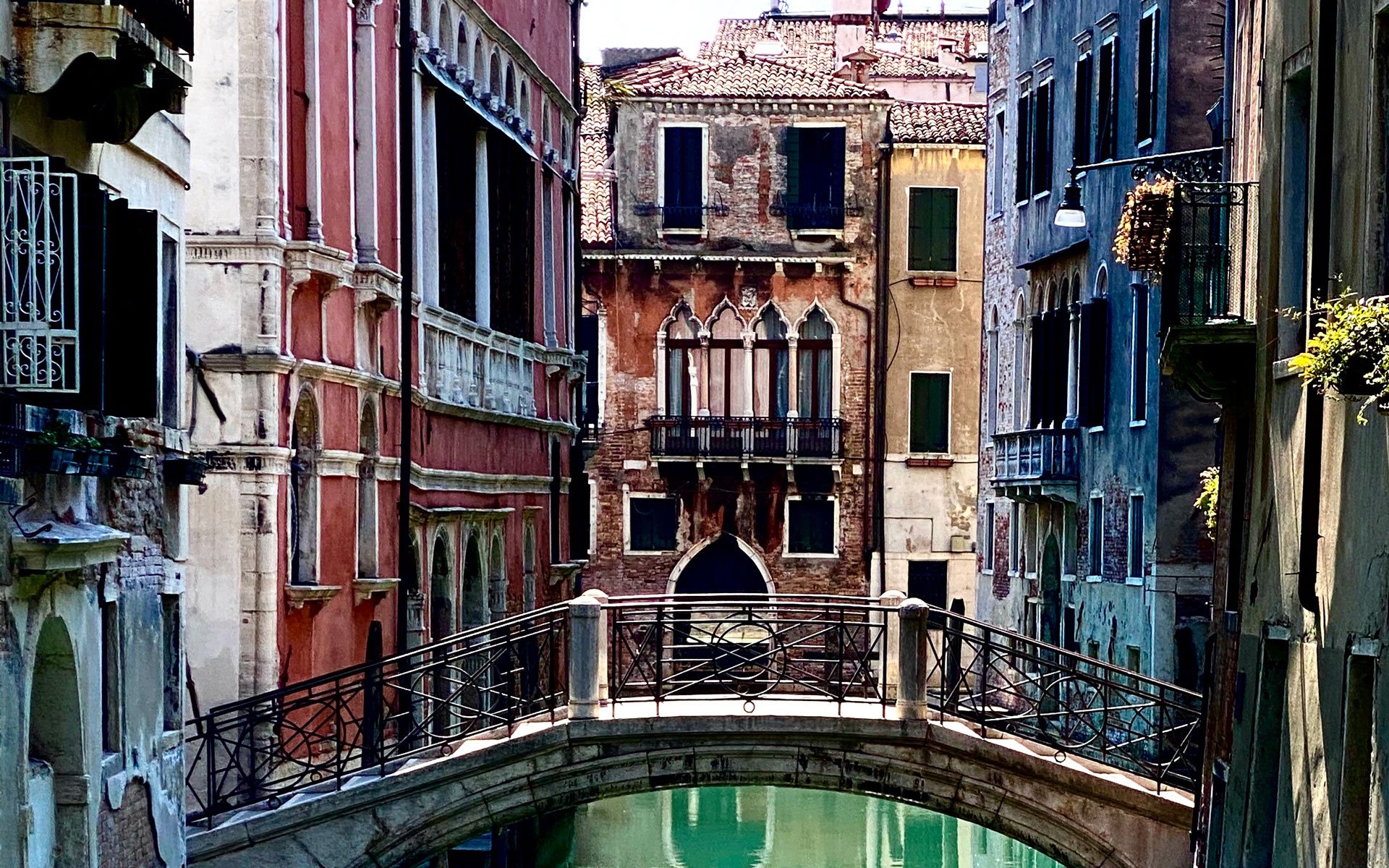 Having the mazelike cobbled sidewalks of Venice cleared of tourists and all to yourself may seem like an unimaginable fantasy, but for Roger Thomas, it was a reality when the enforced lockdowns due to COVID-19 essentially closed the city for four months. No stranger to the famed city, the designer had recently purchased a palazzo along the Grand Canal and was on-site to oversee the renovations of the landmark, which was originally commissioned by Ludovico Sforza, the Duke of Milan in the 15th century and a patron of Leonardo da Vinci. Thomas and his partner, Arthur Libera, were scheduled to stay for just three weeks in a rented apartment in a palazzo where he once lived, but canceled flight after flight left Thomas with no choice but to stay, slow down, and absorb the nuances of the floating city. 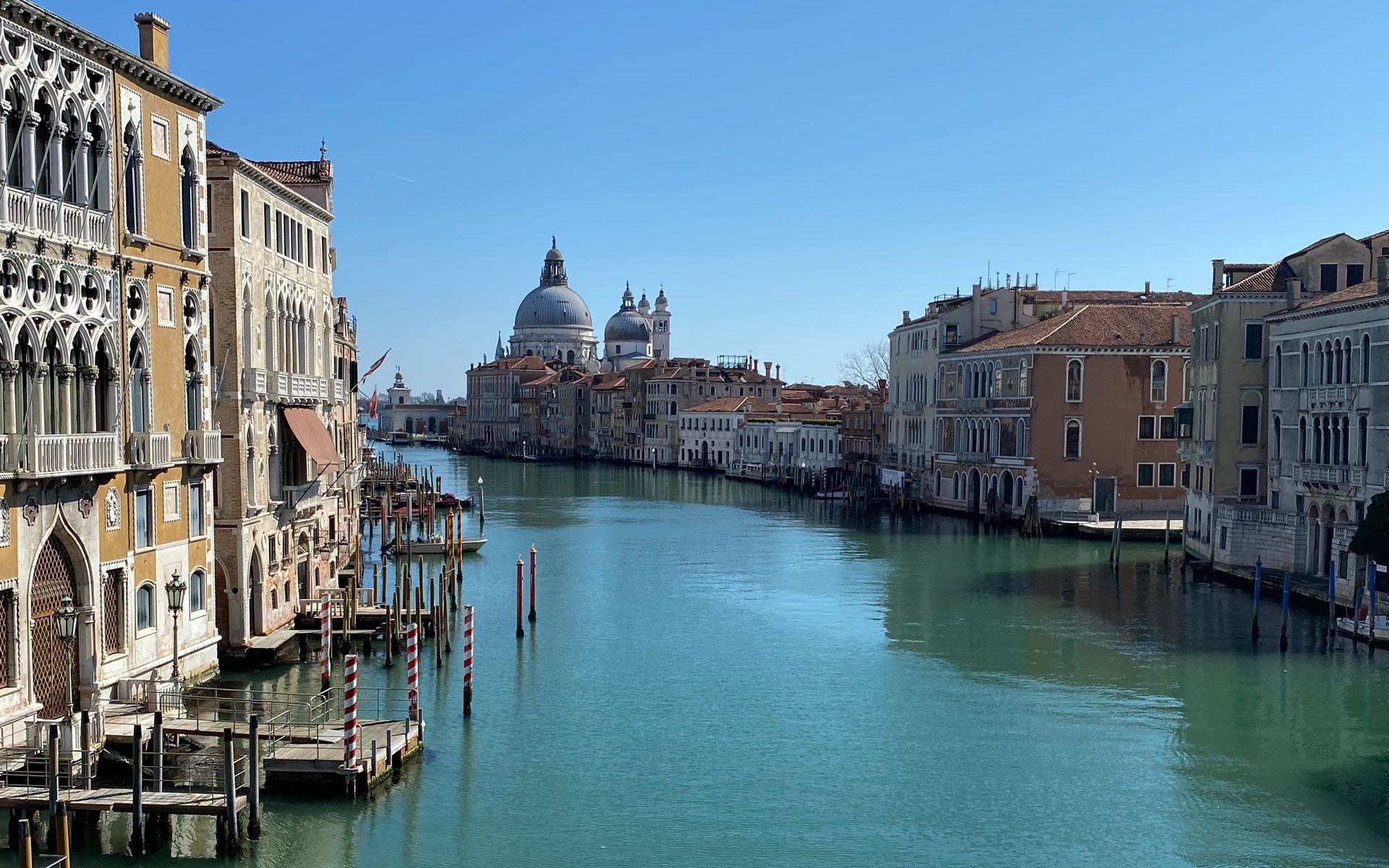 Venice has seen unprecedented quiet and tranquil waterways during the pandemic. Here, a view across the Grand Canal, which is usually bustling with gondolas and ferries. Photo: Roger Thomas

Just like with the spectacular projects he’s devised for Wynn Resorts—from the Bellagio Hotel in Las Vegas to the Wynn in Macau, and most recently the Wynn Boston Harbor—he approached this extended stay with imagination, passion, and an eye for detail. Although he was allowed to leave home only with a specific need and paperwork, according to the Italian rules around quarantine, he planned his trips to the butcher and baker with sites in mind. Donning his Rubelli face mask, he would venture into the streets, ready to soak in the beauty. “Trips to the baker meant I would stop to visit Tintoretto’s Baptism of Christ in Chiesa San Silvestro,” Thomas explains. “That meant scheduling trips around when the church would be open.” 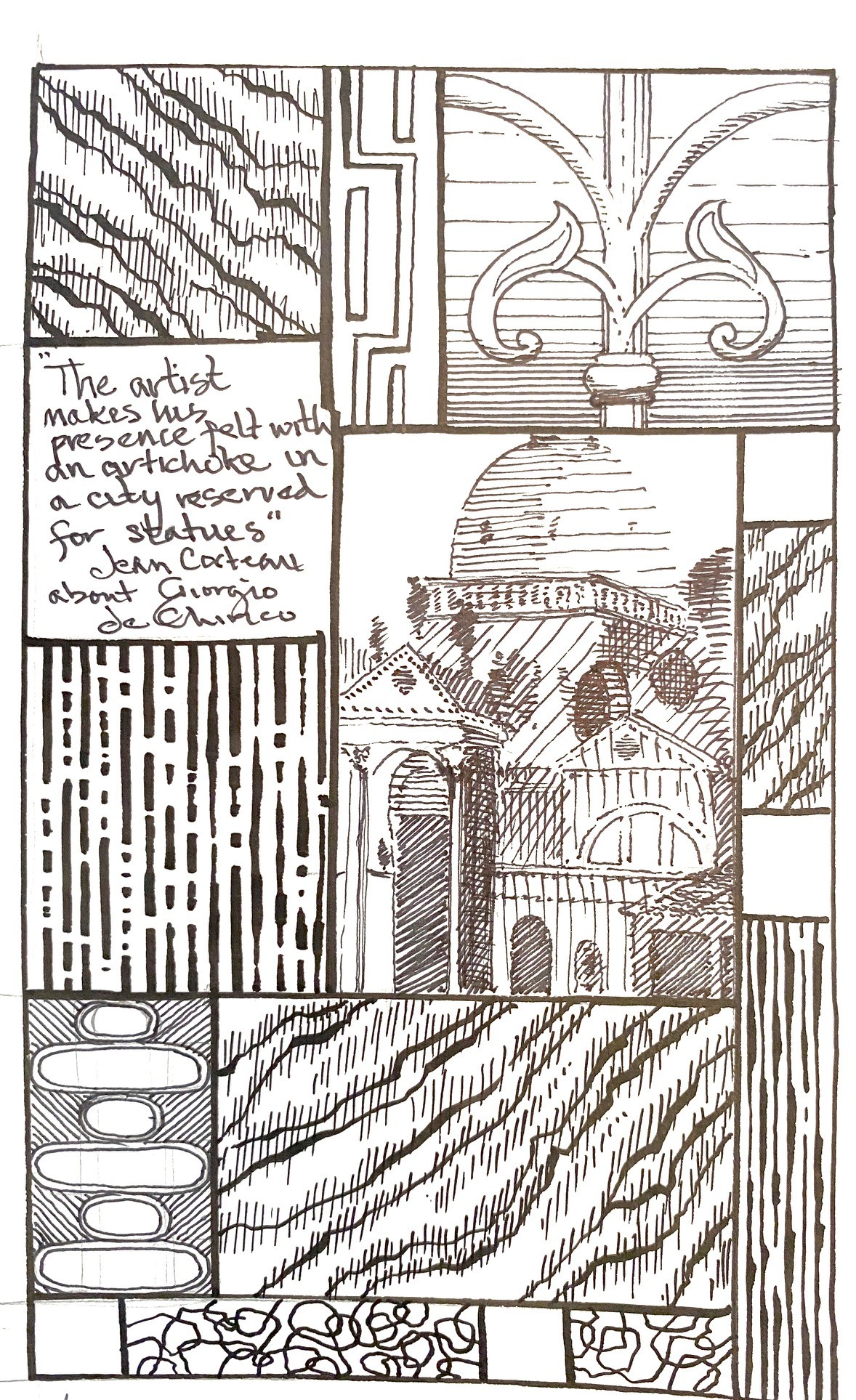 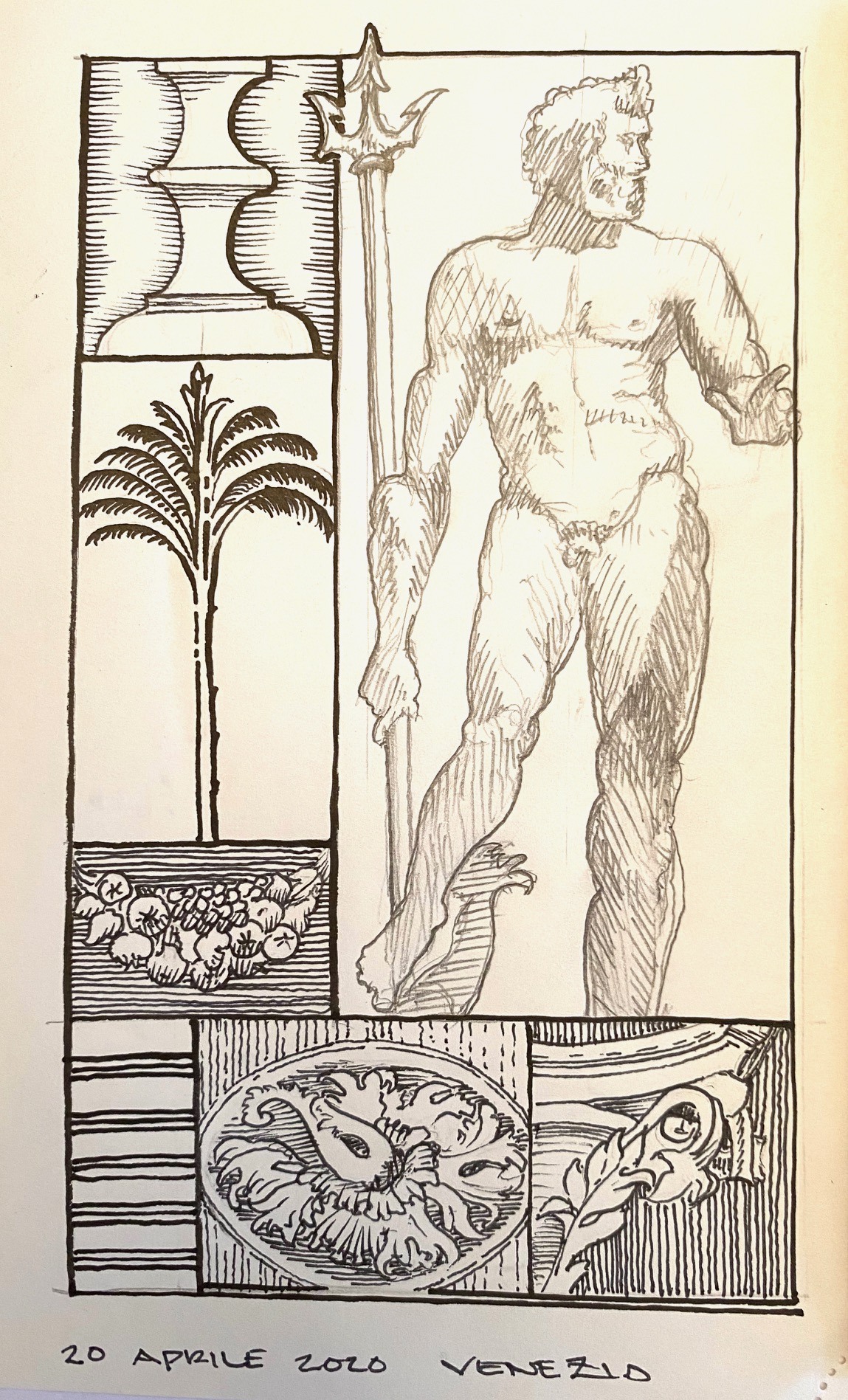 From those observations, he sketched daily capriccios, dividing his notebook page into several squares and filling in each one with something he noticed that day. “Usually, you’re navigating through throngs of people, so I looked up more than usual,” explains Thomas, who is now back in California. “I could look up and see rooftop gardens. I noticed a marvelous 18th-century stone bas relief of a shoe that I never saw before.” There were those everyday observations of the centuries-old city, plus unexpected occurrences like finding himself completely alone in San Marco square in the middle of a Saturday afternoon. “Being alone in San Marco was the dream of a lifetime.” 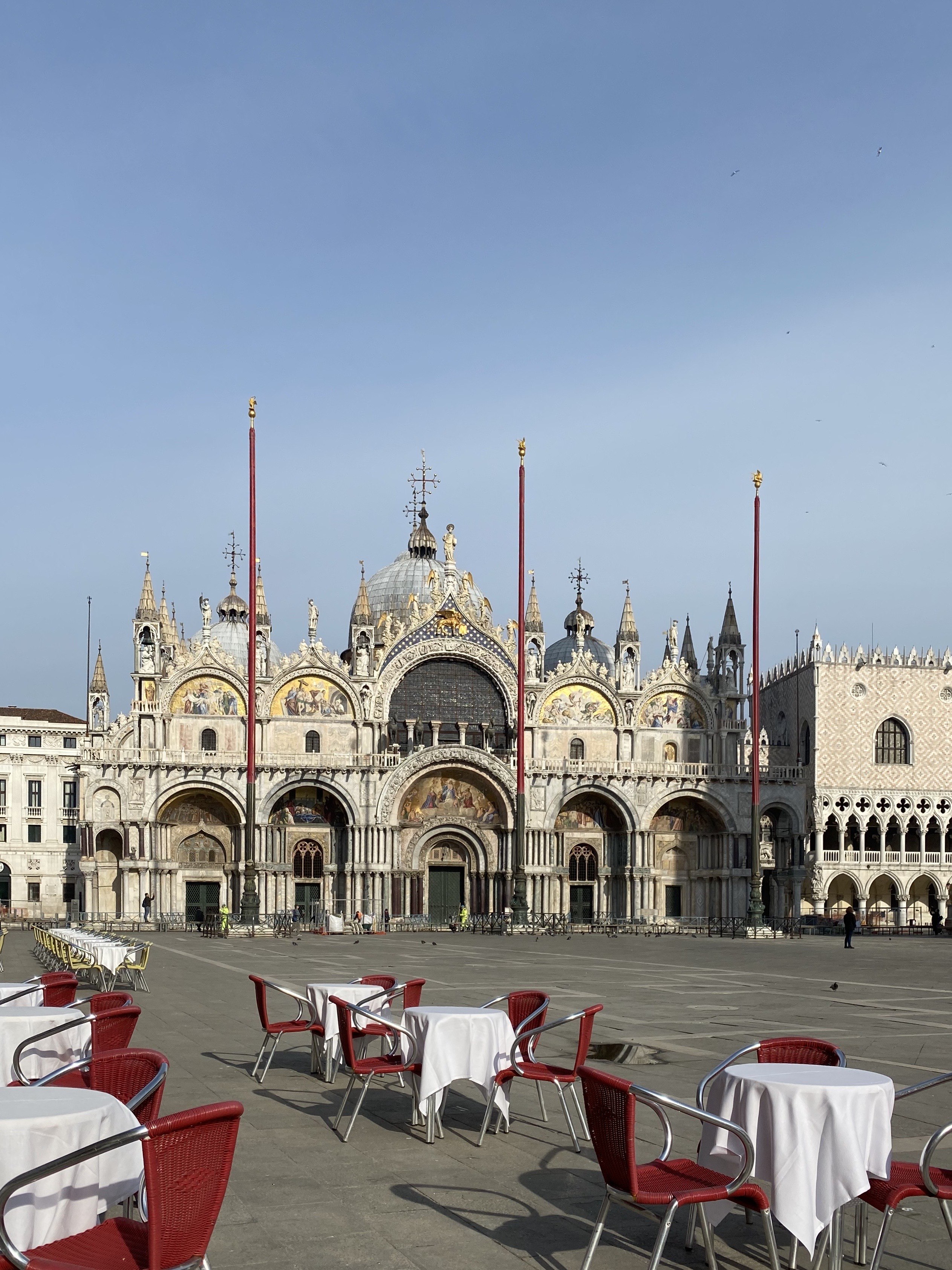 He also found time to continue his studies of the Italian language, even learning the vocabulary for such unexpected phrases as “mosquito net,” and carefully observed the differences between buildings designed by Andrea Palladio versus the imitators who followed. 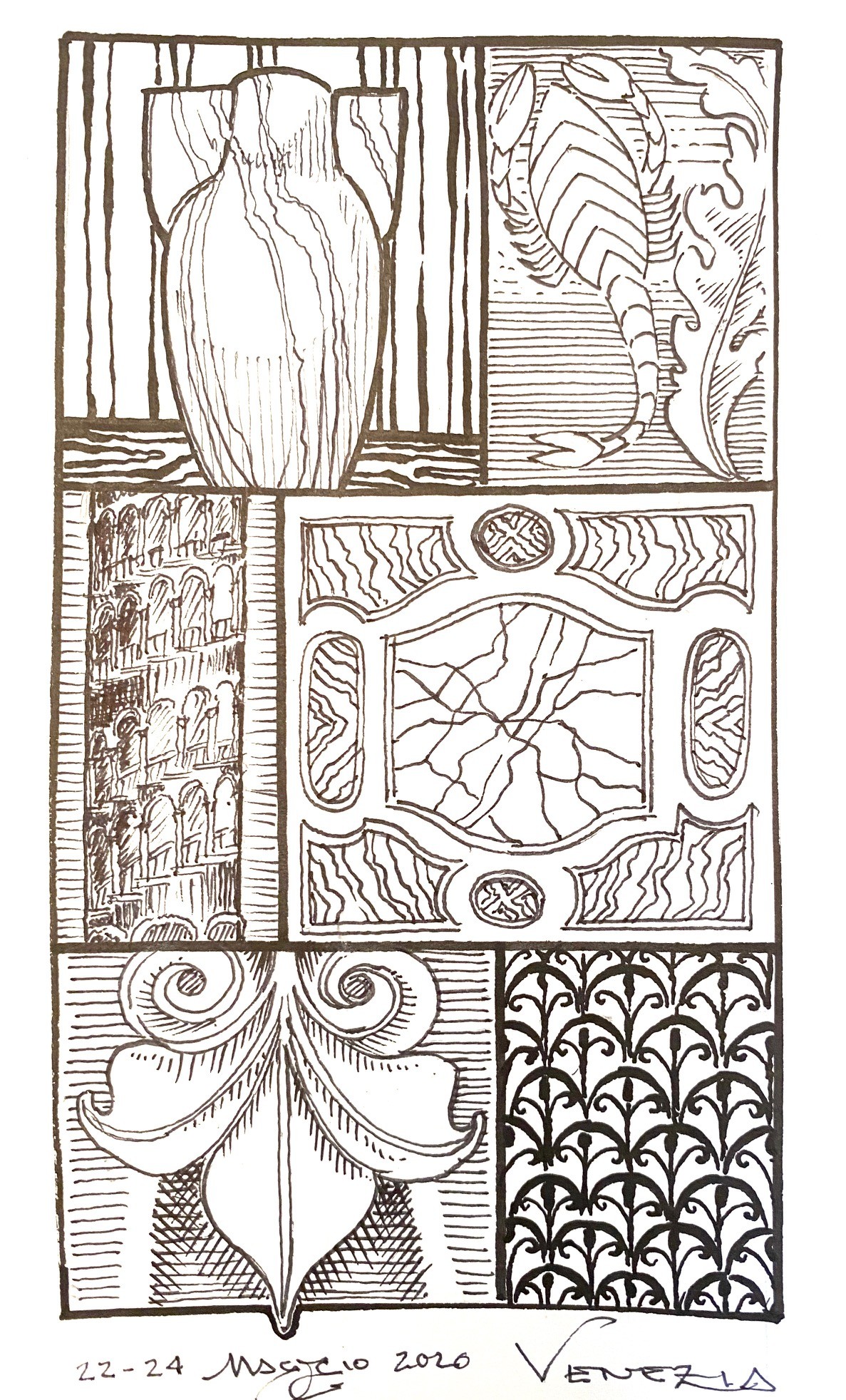 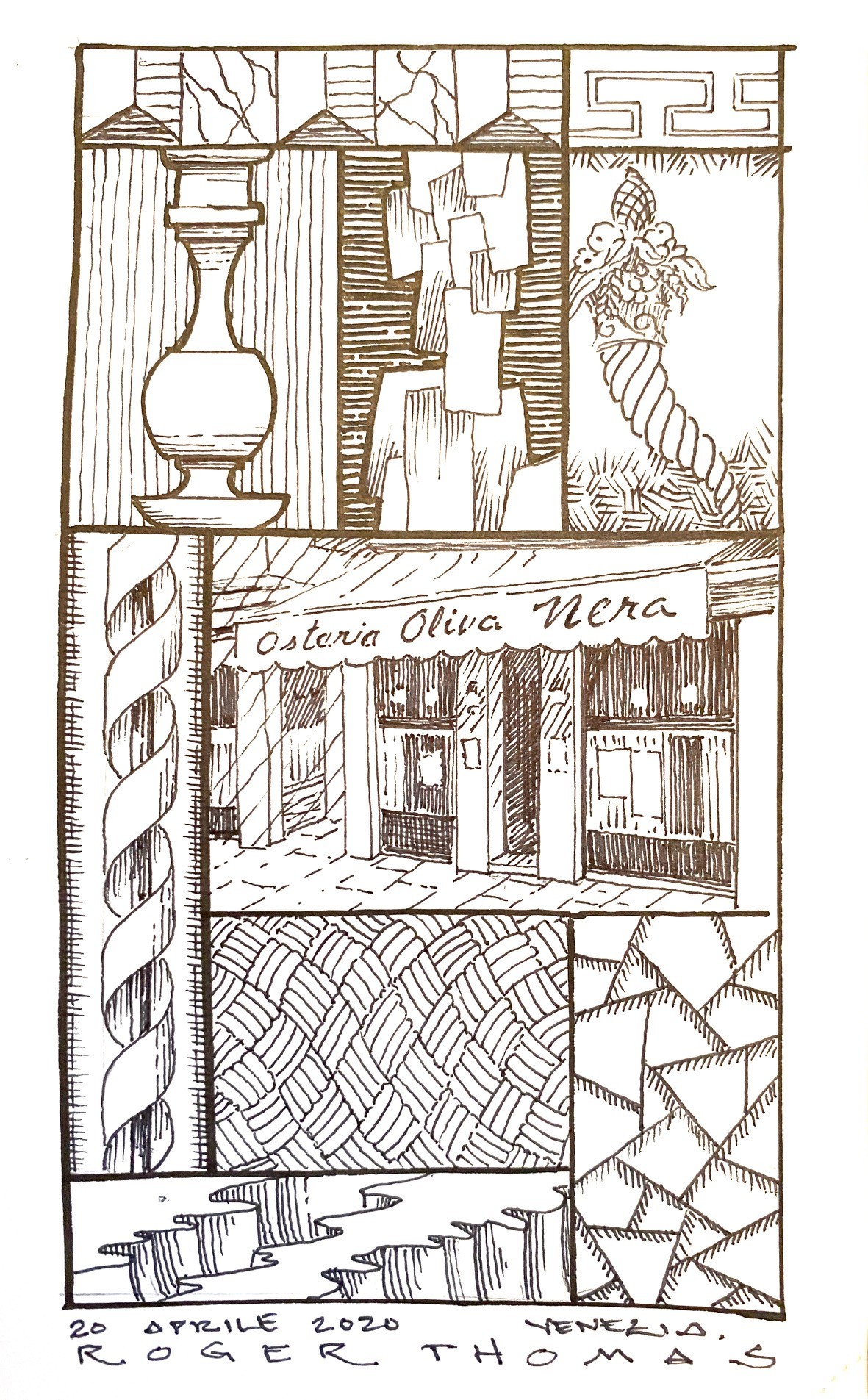 Now that he’s back in California, he dreams of his returning to Venice to check in on his ongoing projects there. He’s eager to visit the Luca Giordano Deposition of Christ at the Gallerie dell’Accademia, whose restoration he and Libera are helping fund. Plus, there’s his own renovation, where construction is once again under way on the palazzo, which hadn’t been touched since the 1950s. His designs will be a marvelous reflection of the magical city with walls painted in a Benjamin Moore color to exactly match the canal’s waters.

“Not only was Venice frozen for that time, it wasn’t getting trampled,” says Thomas. “It’s amazing to be in a pristine city that was cleaned anew.” 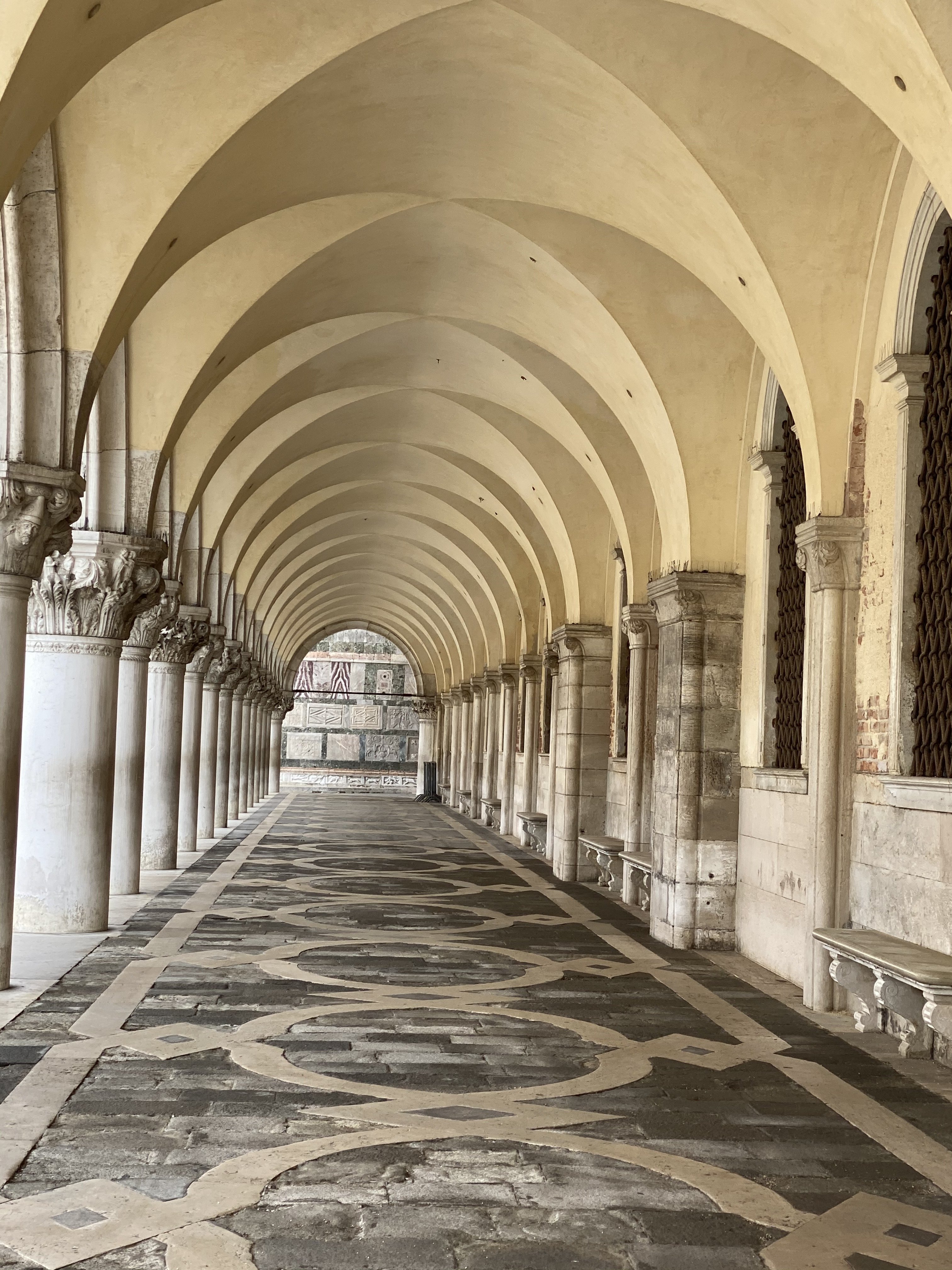 An empty archway in San Marco square, which is usually swarming with tourists. Photo: Roger Thomas