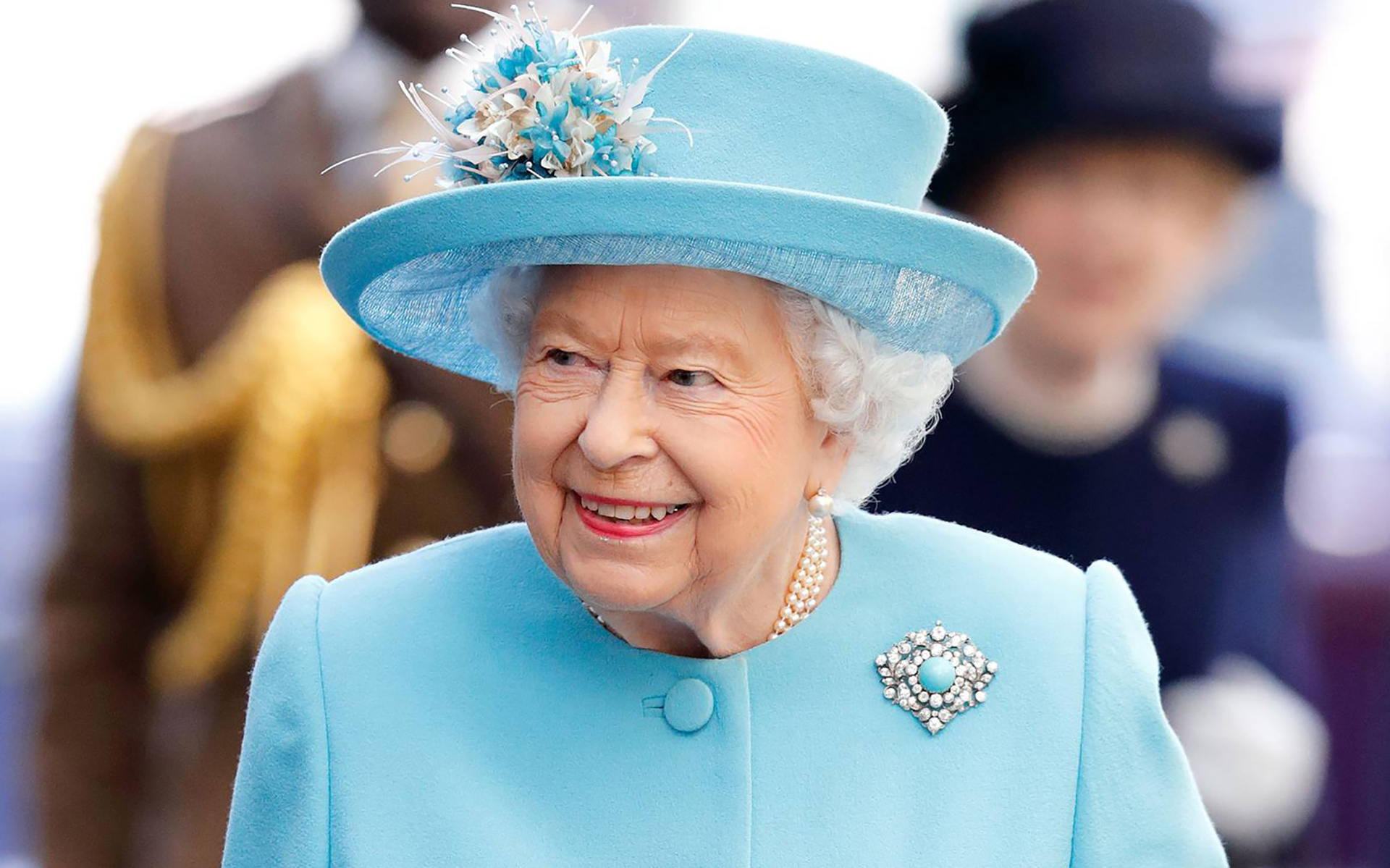 From hotel stays fit for royalty to exhibitions of regal adornments, these are nine great ways to commemorate the monarch’s 70 years of service

This past February marked Her Majesty the Queen’s 70th year in service, and to commemorate the monumental milestone London is hosting a Platinum Jubilee. While the four-day celebration, taking place June 2 through 5, will be filled with pomp and circumstance, there are various other ways to get in on the holiday spirit with exhibitions, hotel getaways, and other collectibles marking the occasion. Here, take a look at some creative ways to get in on the unprecedented experience. 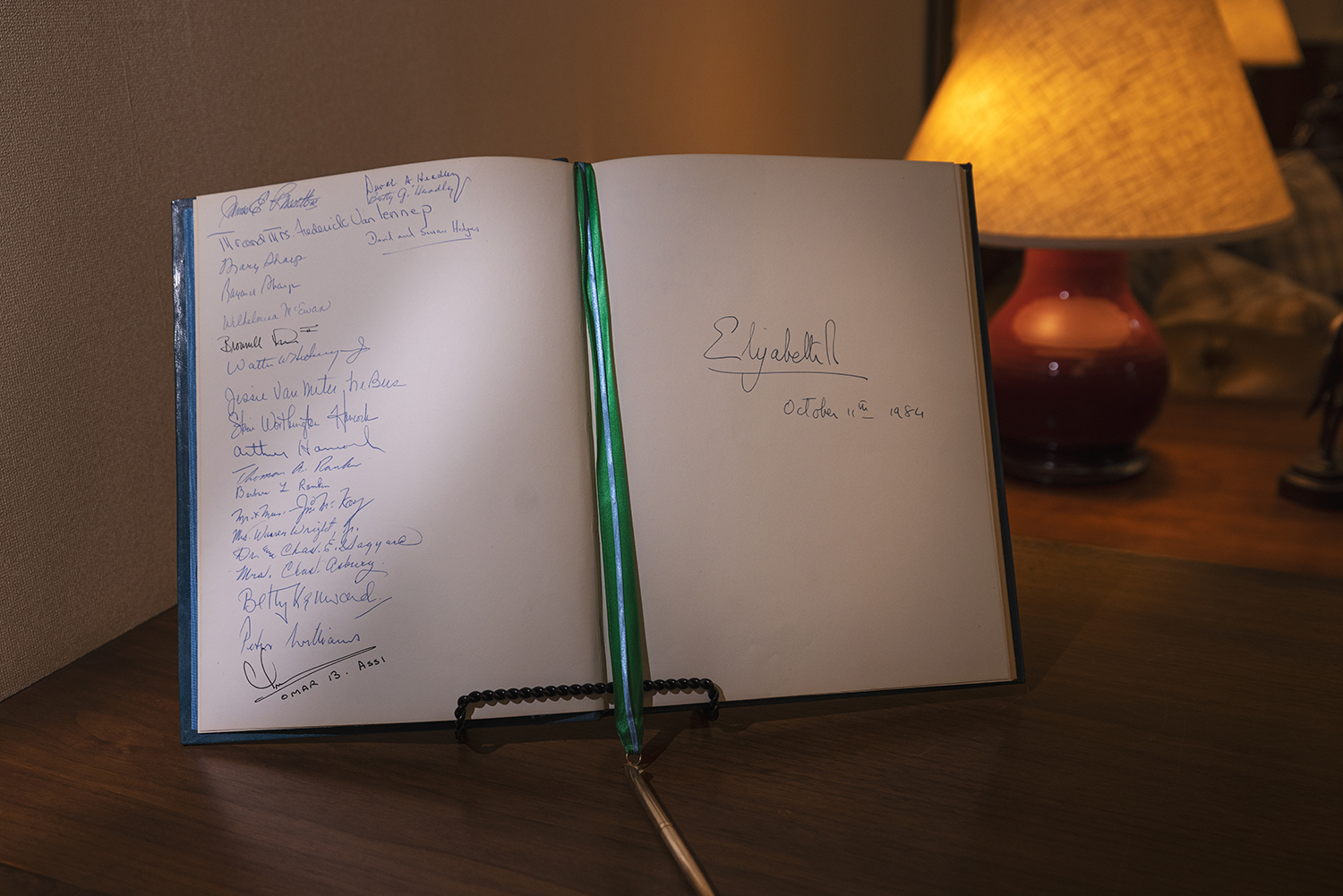 A guestbook signed by Her Majesty the Queen during a 1984 visit to Keeneland. Photo: Keeneland 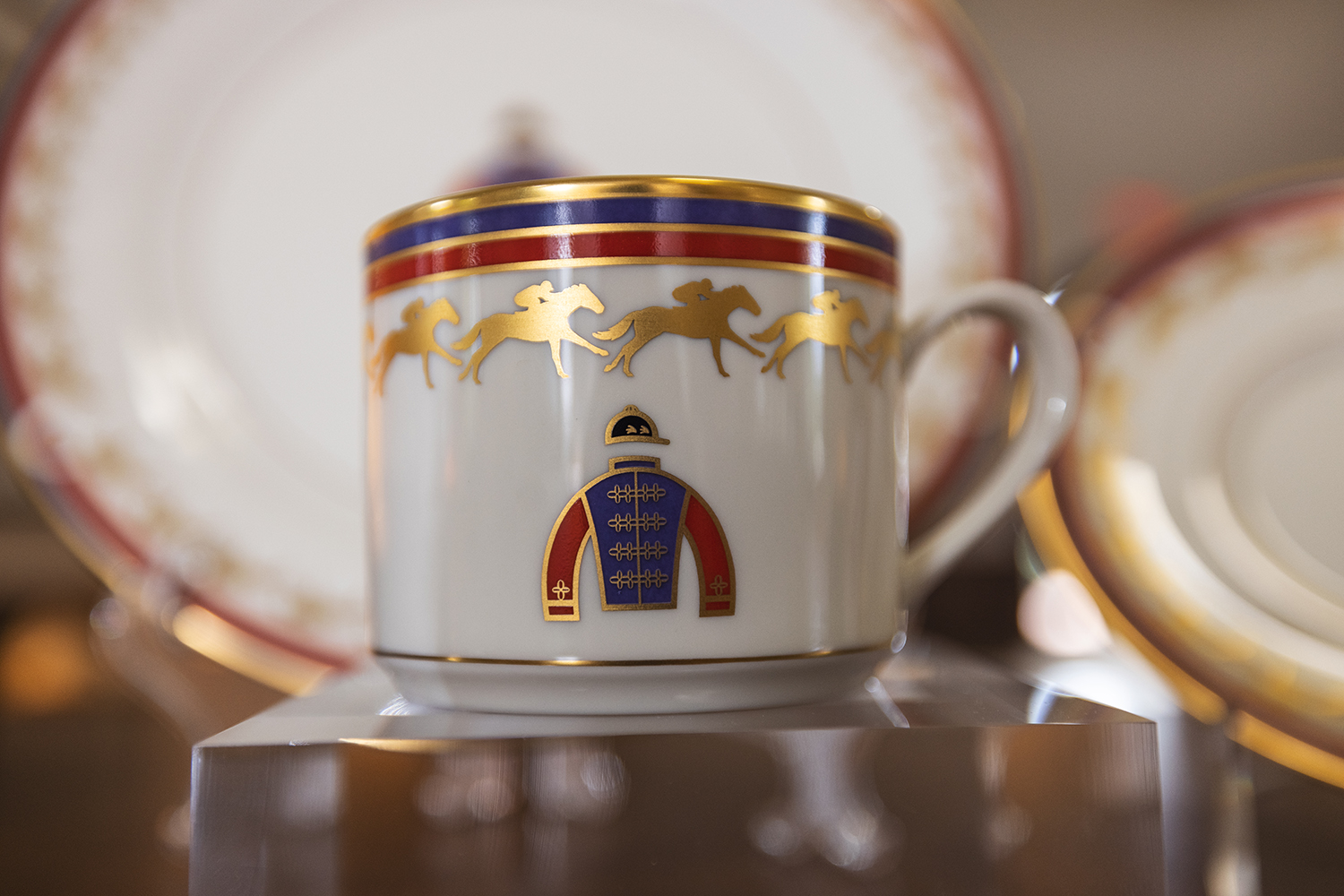 China commissioned for Her Majesty's 1984 visit to Keeneland. Photo: Keeneland

The Queen’s love of all things equestrian is well documented, and the Platinum Jubilee will indeed include a family trip to the Cazoo Derby at Epsom Downs on Saturday, June 4. Decades prior, Her Majesty visited the Keeneland racecourse in Lexington, Kentucky, and the on-site library is hosting an exhibition of royal mementos of that 1984 event including a set of china commissioned for the occasion, a guest book signed by the monarch, and a sculpture of one of Queen Elizabeth II’s most beloved thoroughbreds, Aureole.

Approximately 50 gold and jewel-encrusted headpieces are being displayed at Sotheby’s London in the U.K.’s largest exhibition of tiaras in more than two decades. On view through June 15 are exceptional examples, including the Spencer Tiara, created in 1767 and worn by Lady Diana Spencer in her 1981 wedding to the future king. Among the other tiaras being presented, some displayed publicly for the first time, are Queen Victoria’s emerald and diamond tiara; a gold, cameo, and enamel diadem once belonging to Joséphine Bonaparte; and pieces worn during the Queen’s coronation in 1953, including the circa-1890 Anglesey tiara, the Derby tiara, and Westminster Halo tiara that was made in the 1930s by famed Paris jewelers Lacloche Frères. Beyond the exhibition, Sotheby’s is hosting the Jubilee Arts Festival, which will encompass talks, concerts, and performances to celebrate British culture. 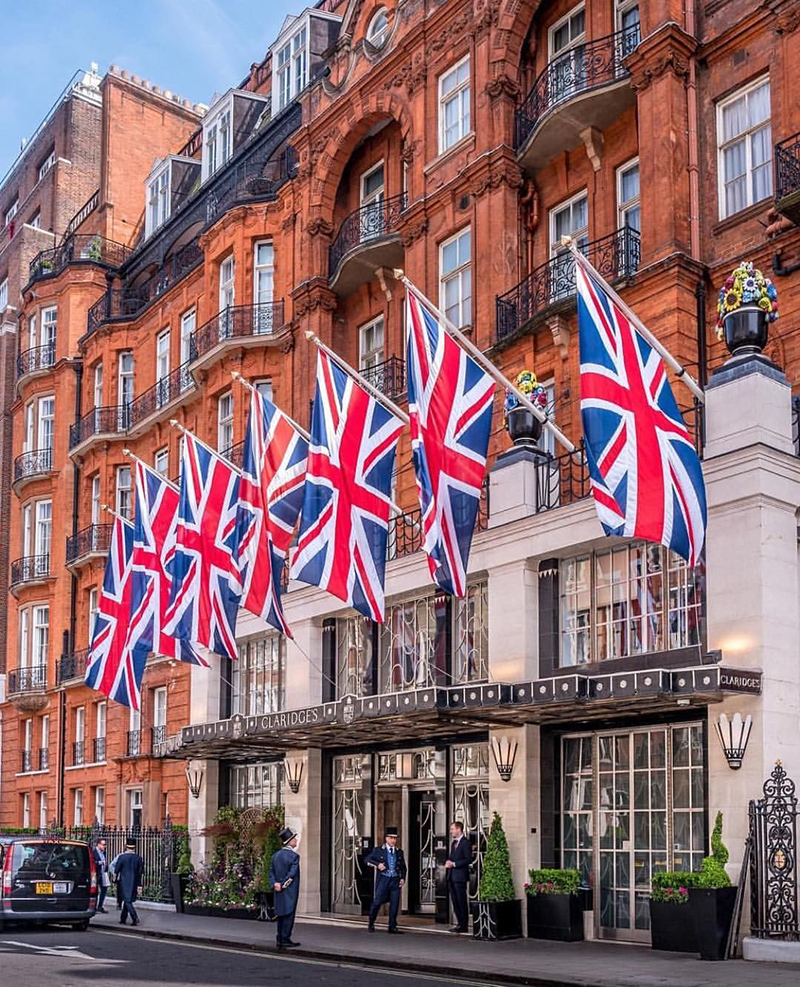 The celebrated Mayfair hotel has an extensive archive of materials that link back to the royal family, and many of those unique treasures are being put on display for the very first time. Guests are welcome to visit Claridge’s lobby to see footage of Queen Elizabeth viewing Coronation gowns at the hotel in her accession year as well as Coronation Day menus, cocktail cards, and other memorabilia. Then visit the Fumoir or Claridge’s Bar, where special cocktails like the Windsor Rose (which was served at Claridge’s to mark the Queen’s Coronation in 1953), the Claridge’s Regal, and the Royal Stag are being served. 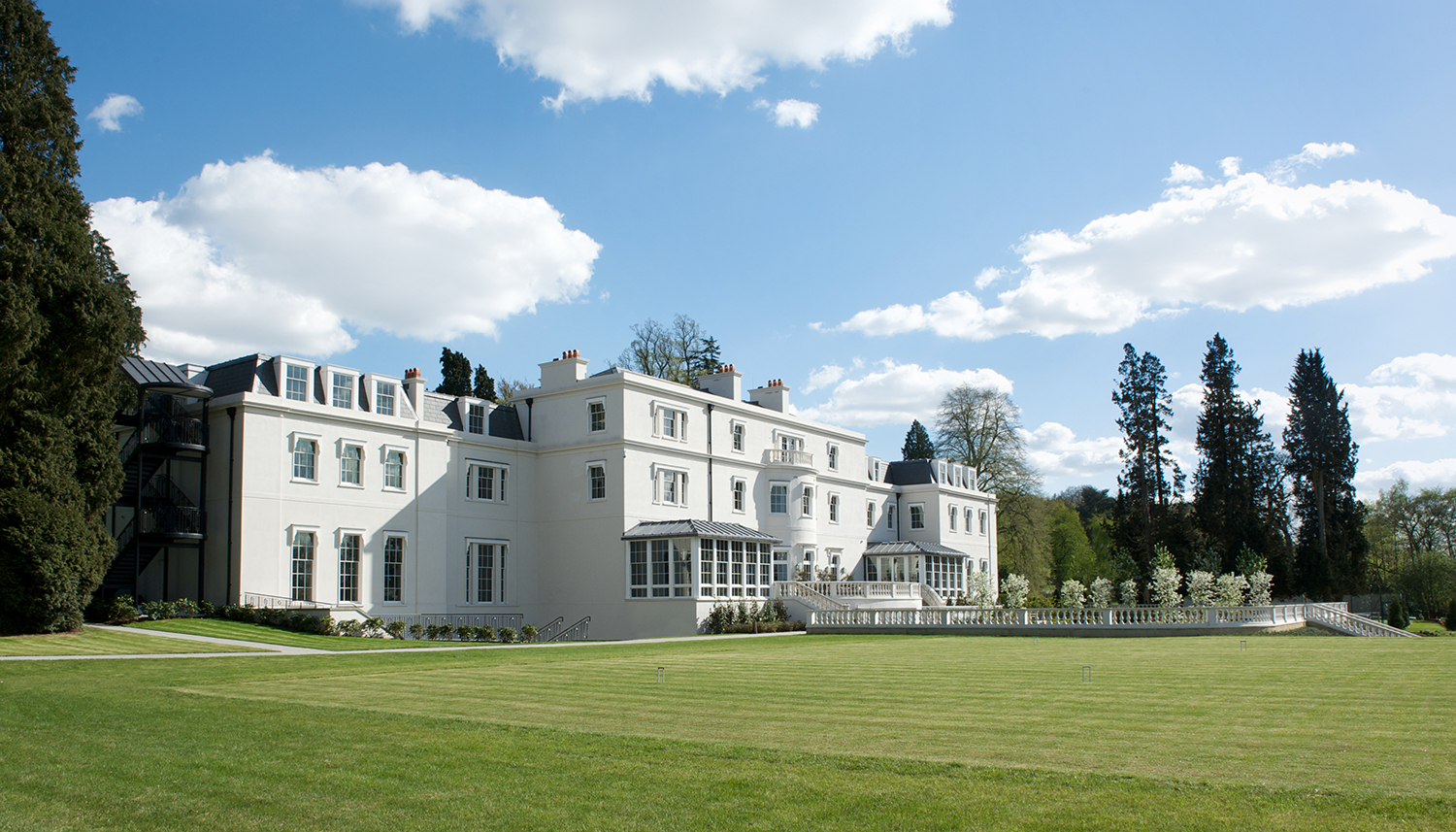 Both Prince William and Prince Harry spent the night before their weddings at this five-star hotel close to Windsor Castle. While a stunning retreat any time of year, Coworth Park will be hosting a series of events for the four-day Jubilee Weekend. Enjoy croquet and games on the lawn with Pimms and lemonade, watch a screening of the Service of Thanksgiving from St. Paul’s, take in a polo match at the on-site field, and dance the day away during the Sunday “Big Lunch” street party in the lime grove. Wrap up the celebration with a rejuvenating treatment in the spa, where Valmont skincare products are used, and a mouthwatering meal by Michelin-starred chef Adam Smith at Restaurant Coworth Park. 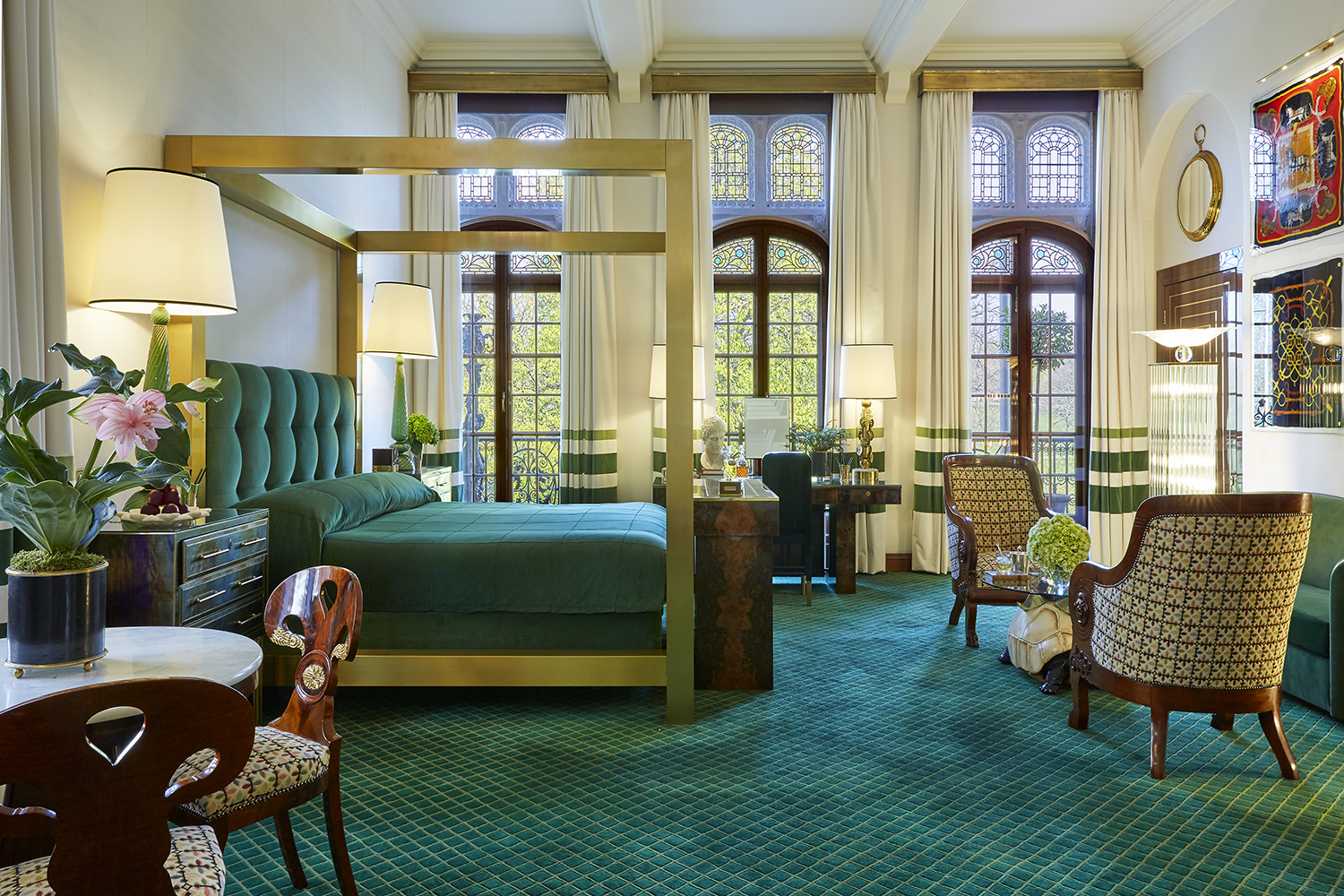 Situated just across from Kensington Palace, the Milestone Hotel & Residences offers artfully appointed accommodations, including apartments named for members of the royal family complete with a private entrance, full-service concierge, and use of the hotel chauffeur. During the Jubilee, guests can arrive via a private Bentley ride, then take a private tour of Kensington Palace, and have a picnic in the park. Wrap up the evening with a concert by members of the Royal Philharmonic Orchestra or a drive in a classic Daimler once owned by the Queen Mother. 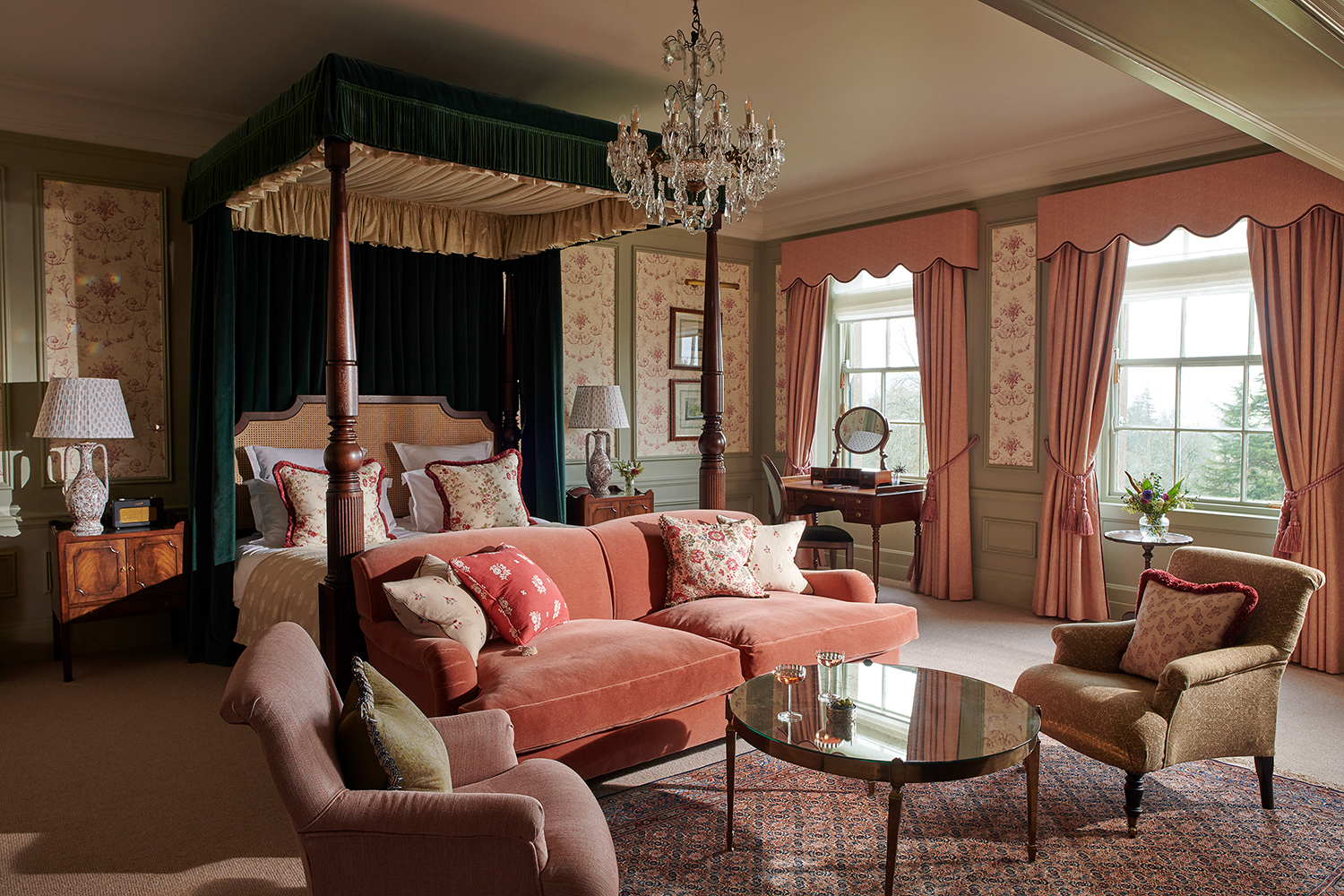 Step outside of London to the Queen’s beloved Scotland where Gleneagles is offering the five-day “Ultimate Jubilee Package.” Visitors will be some of the first to experience the hotel’s new townhouse accommodations in Edinburgh, enjoy privately guided tours of the Palace of Holyrood House, the official residence of Her Majesty the Queen in Scotland, and Glamis Castle, the ancestral home of Queen Elizabeth, The Queen Mother, and sample dishes fit for royalty, like a champagne afternoon tea. 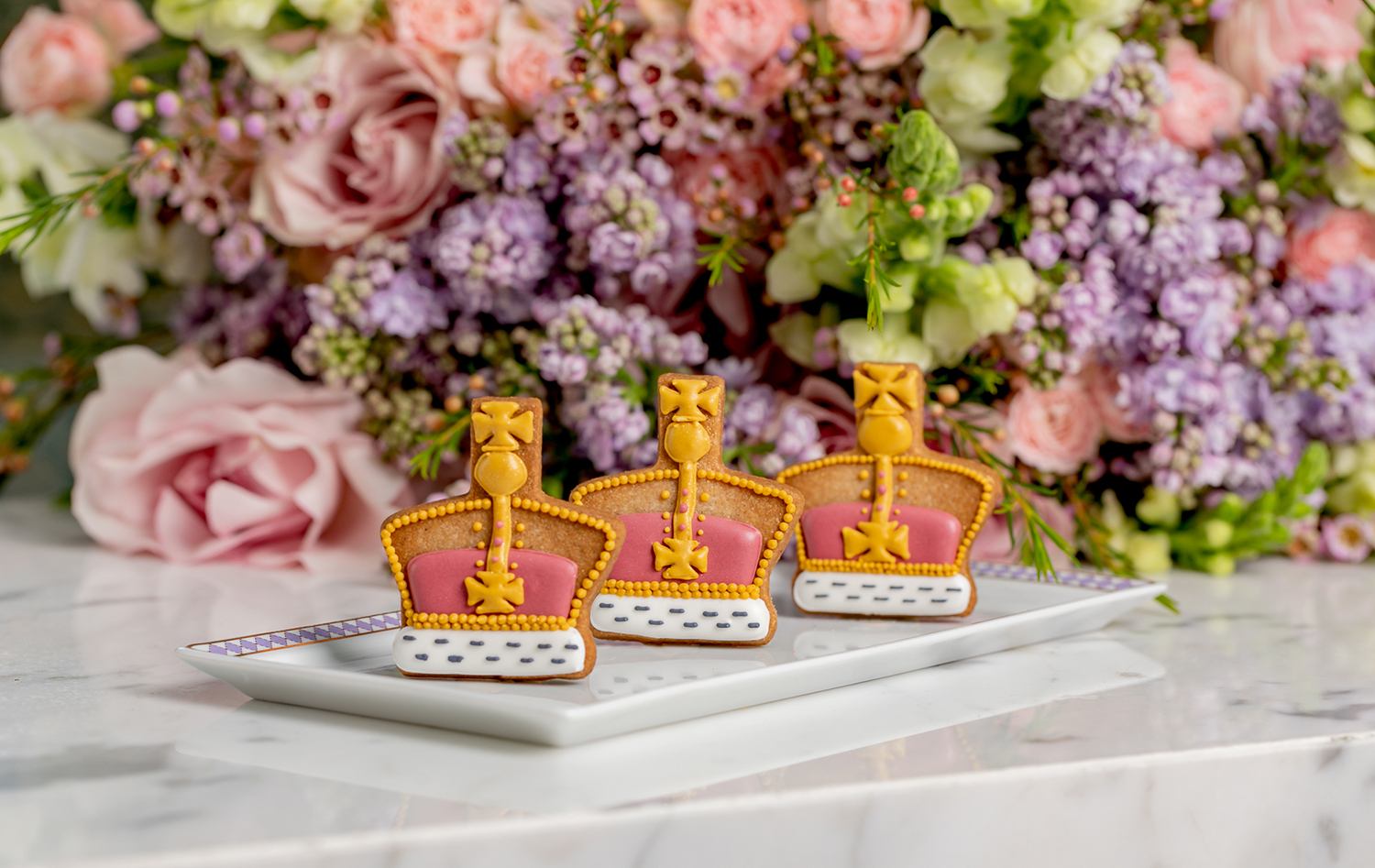 The Berkeley’s whimsical nosh, Prêt-à-Portea, is changing up its customary haute couture treats for a sweet salute to the Queen. Enjoy desserts shaped like two of Her Majesty’s most iconic accessories—hats and Launer London handbags—as well as a regal crown made with vanilla biscuit with royal icing (of course). Companion mocktails also nod to the monarch including the Superbloom, which combines non-alcoholic gin and earl grey tea. 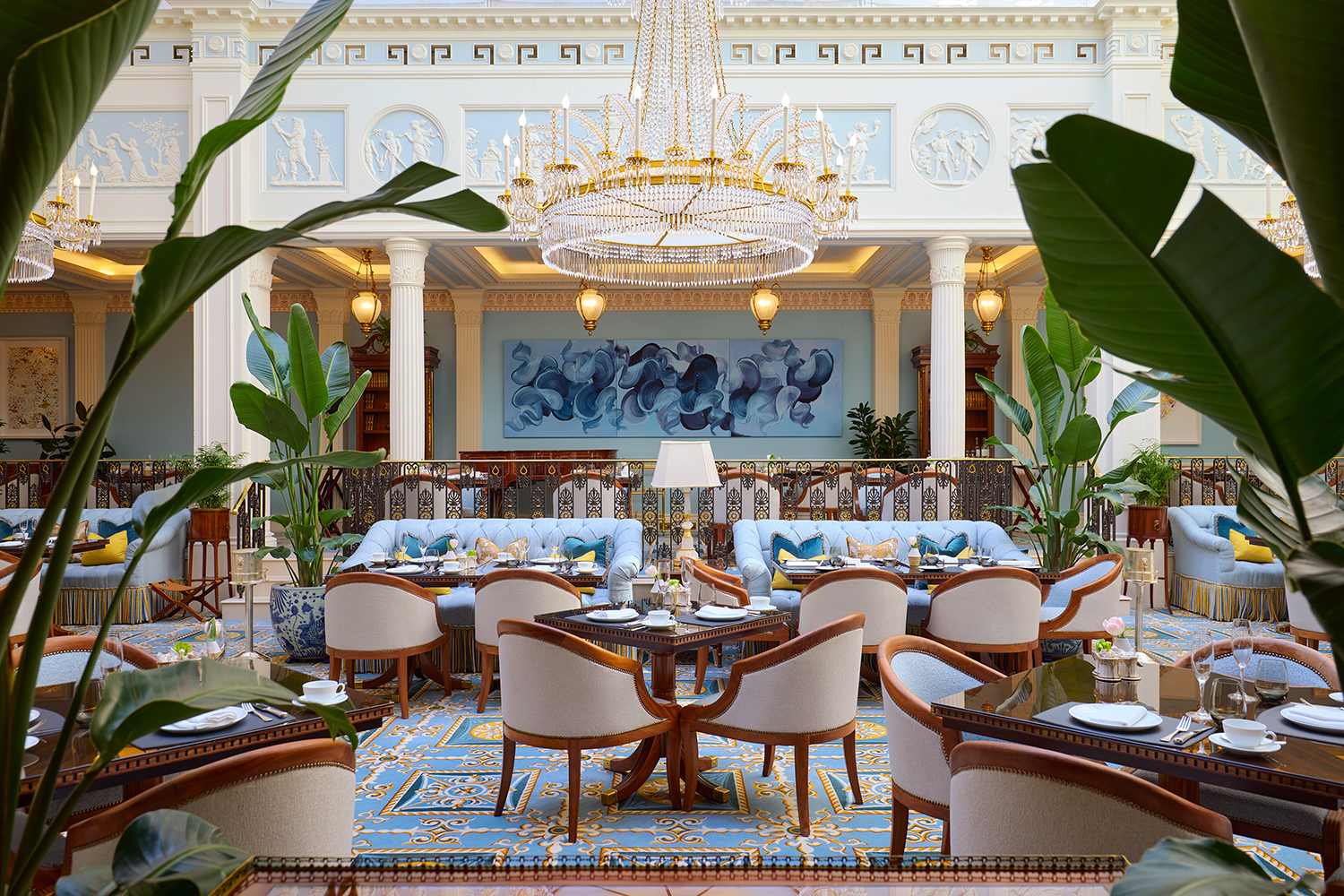 Located just steps from Buckingham Palace, this Oetker Collection hotel gives royal watchers a front-row seat to the Jubilee festivities. Visitors to the Lanesborough will enjoy an aerial view of the Trooping of the Colour parade and perfect perch for the RAF flyover, both happening on June 2. Then unwind with a “Queen for a Day” spa package, sip a cool Lilibet cocktail in the Library bar, and take in the rotating selection of art displayed in the Lanesborough Grill where Michelin-star chef Shay Cooper serves modern interpretations of British classics. 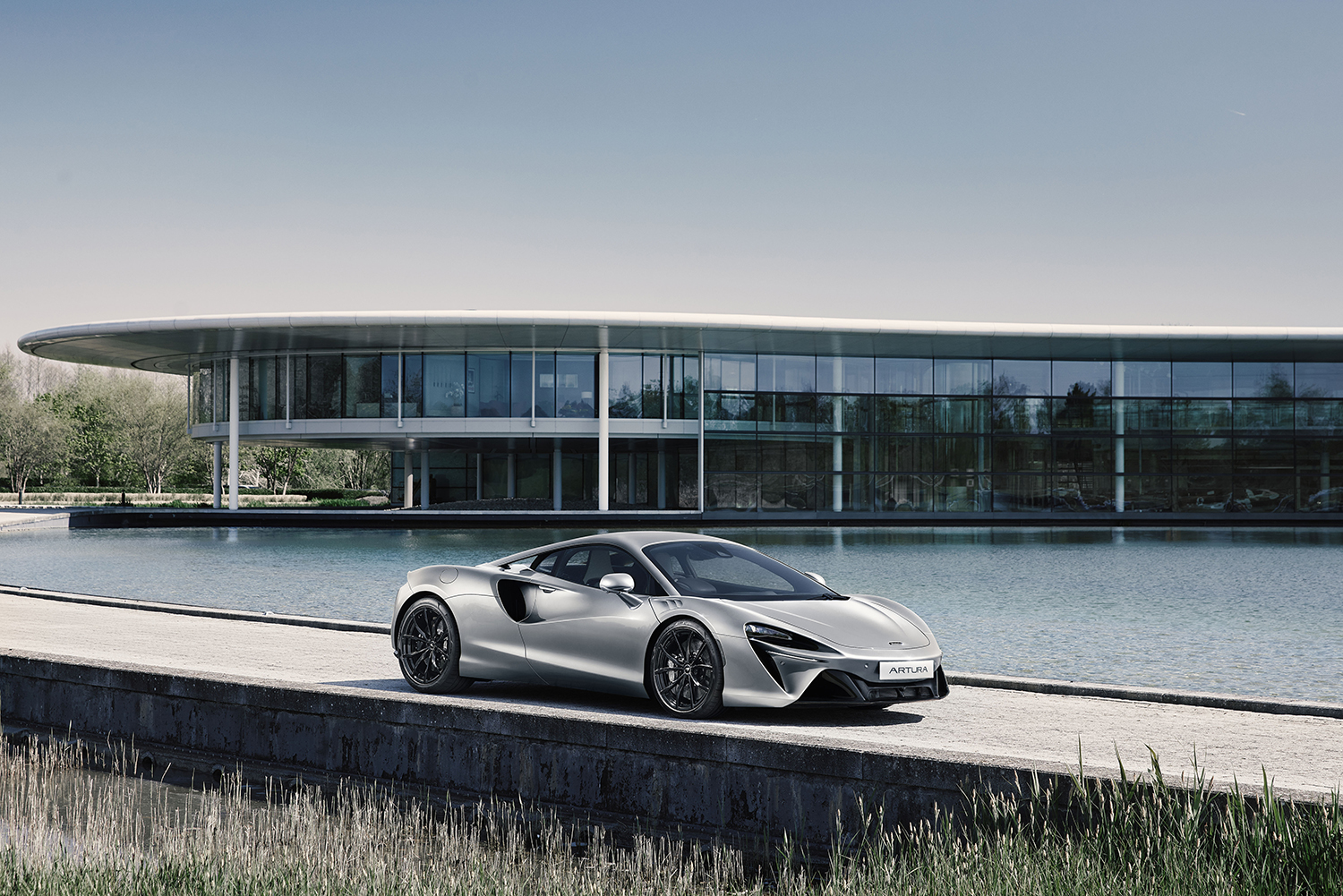 Forget the tea towels and porcelain plates—the ultimate memento from this history-making celebration is a next-generation hybrid sportscar with a stunning platinum finish. Queen Elizabeth II and Prince Philip, Duke of Edinburgh, were the first to sign the guestbook at the May, 2004, grand opening of the McLaren Technology Center in Surrey. Now, to celebrate Her Majesty’s 70-year reign, the automaker is creating an Elizabeth II badge and color-matching platinum finish that was unveiled on the company’s Artura high-performance supercar. “It has been an honor for MSO to create a new platinum paint in celebration of Her Majesty’s Platinum Jubilee this year,” Ansar Ali, Managing Director – McLaren Special Operations, McLaren Automotive, said in a statement. “This special paint, which will be available for customers to select for years to come, will be a fitting tribute to mark this historic milestone.”