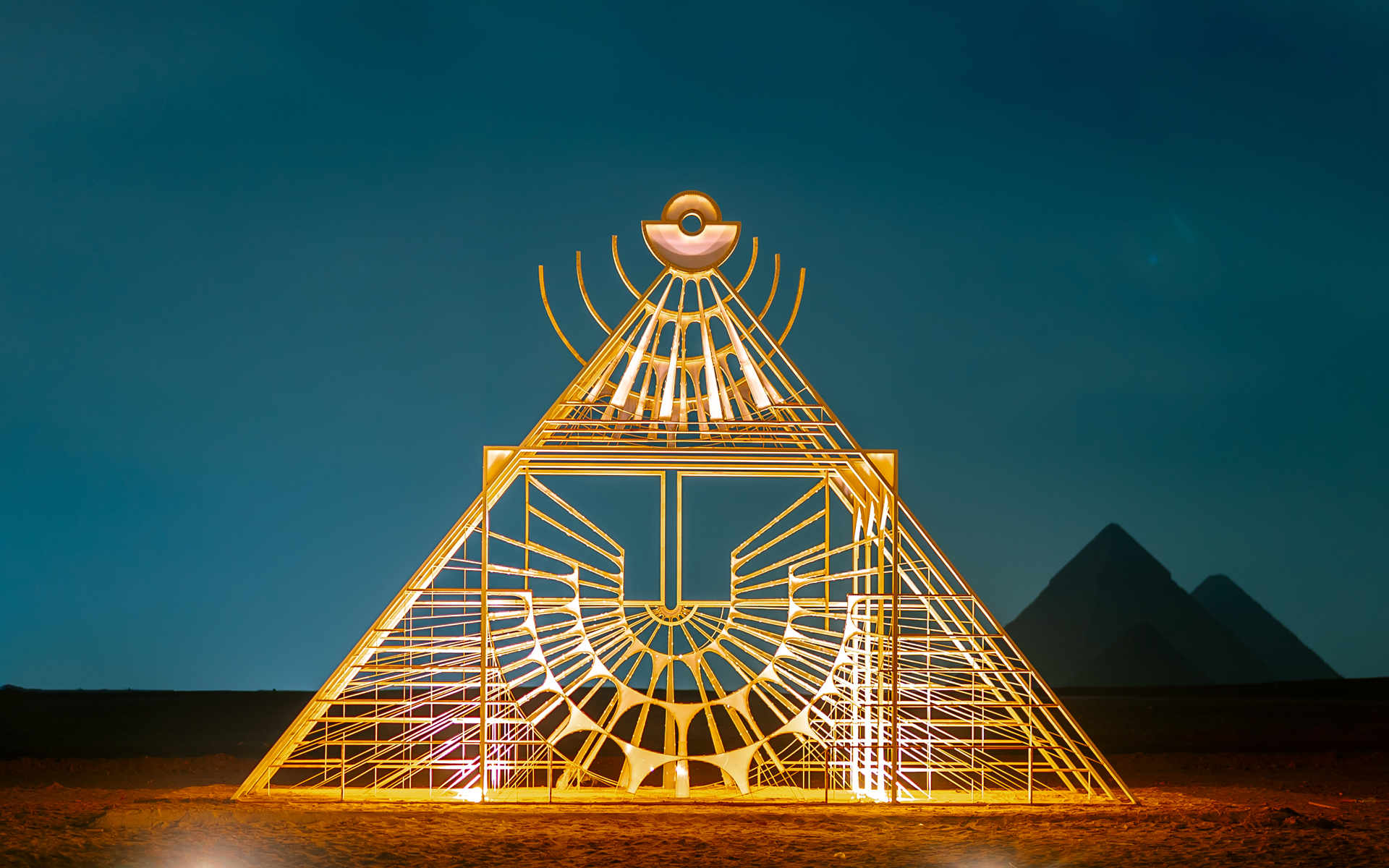 As the bright Mediterranean sun washed over the Egyptian Pyramids last week, visitors noticed contemporary sightings along with the 4,500-year-old phenomena. From the Parisian artist JR’s pyramid-shaped photobooth structure to Saudi artist Mohammed Alfaraj’s sculpture of a musical instrument made out of rusted water pipes and dried leaves, public art has arrived on the Giza Plateau for the second iteration of “Forever Is Now,” a part of the cultural initiative Art D’Égypte that places contemporary art in Cairo’s historic sites.

After the Egyptian Museum and Mohammad Ali Palace, the founder Nadine Abdel-Ghaffar received approval from the Minister of Antiquities to pair the country’s treasures with the sculptures of today. “There is a real dialogue between contemporary art and artifacts of the ancient Egypt,” she told Galerie. The Egyptian art consultant and curator’s ambitious project attracted 500,000 visitors in its inaugural edition last year and received patronage from UNESCO. 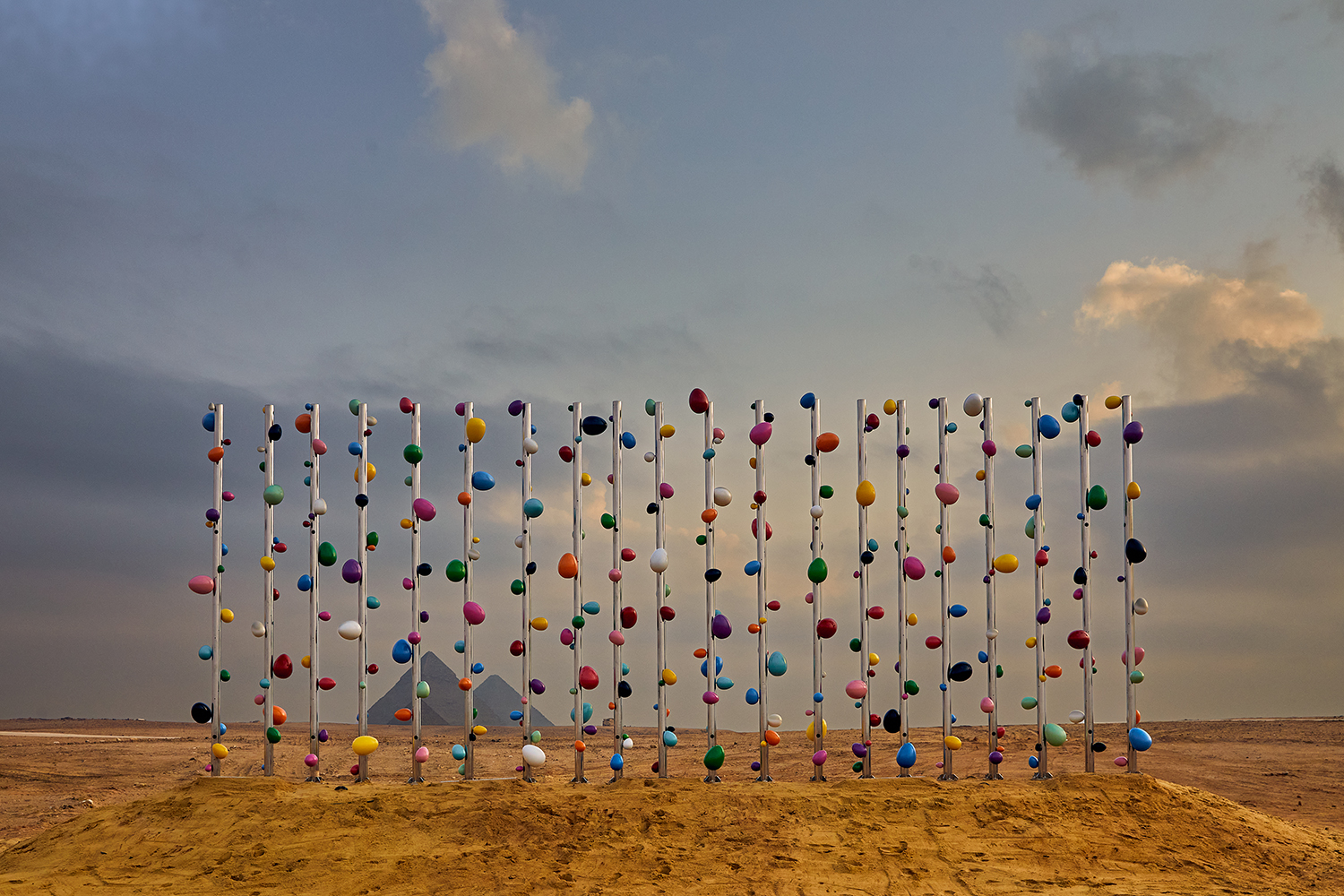 This year, 12 large-scale sculptures by artists such as Pascale Marthine Tayou, Jwan Yosef, Therese Antoine, Ahmed Karaly, Zeinab Alhashemi, and Natalie Clark claim various spots surrounding the three Pyramids, also in vicinity to the Great Sphinx, intriguing the visitors who expect to encounter marvels of the antiquity with new commissions. The hefty presence of the only remainder of the world’s seven ancient wonders on the backdrop creates panoramas that demand a minute to digest—the transhistorical amalgam of creative endeavor, psychic fascination, and physical labor imbues into the viewers’ visions and imaginations the eternal promise of cultural heritage and the immediacy of contemporary ideas. 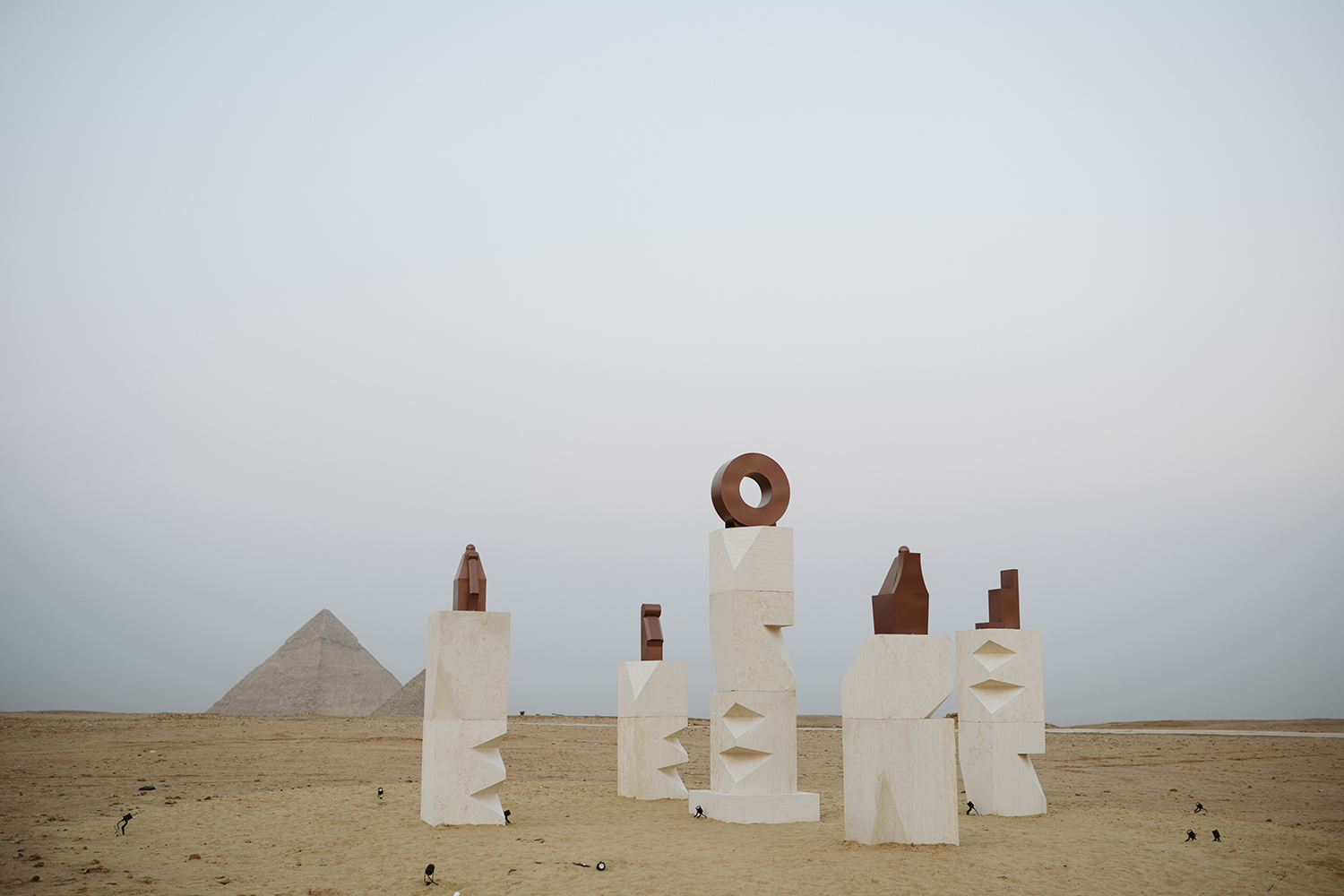 The fusing between the old and the new is not only a visual peg: Abdel-Ghaffar has commissioned each artist to respond to the Pyramids’ standing themes of temporality and impermanence through the lens of the prevalent moment. The artists approach timeless issues via their own realities, such as the environmental crises, the self’s search for belonging, and cultural migration. Alfaraj’s Guardians of The Wind contains materials gathered from the surrounding site to return nature’s cropping back to the land in the form a mantra-like instrument that has the potential to create music with the wind’s blow.

Los Angeles–based Jwan Yosef’s Vital Sands replicates the artist’s nose, lips, and chin in the local Galala limestone; at a massive scale, the trio of facial features sink into the sand like an afterthought of a likeness both with resilience and ephemerality. Cameroonian artist Pascale Marthine Tayou’s sculpture of metal bars, Dream In Giza, holds colorful, larger-than-life wooden eggs that symbolize birth and mortality. The ovals in radiant pink, green, or orange blend into the site’s eternal hue of dusty limestone. “I consider all my artists partners because they’ve created works that they would not anywhere else,” Abdel-Ghaffar adds. 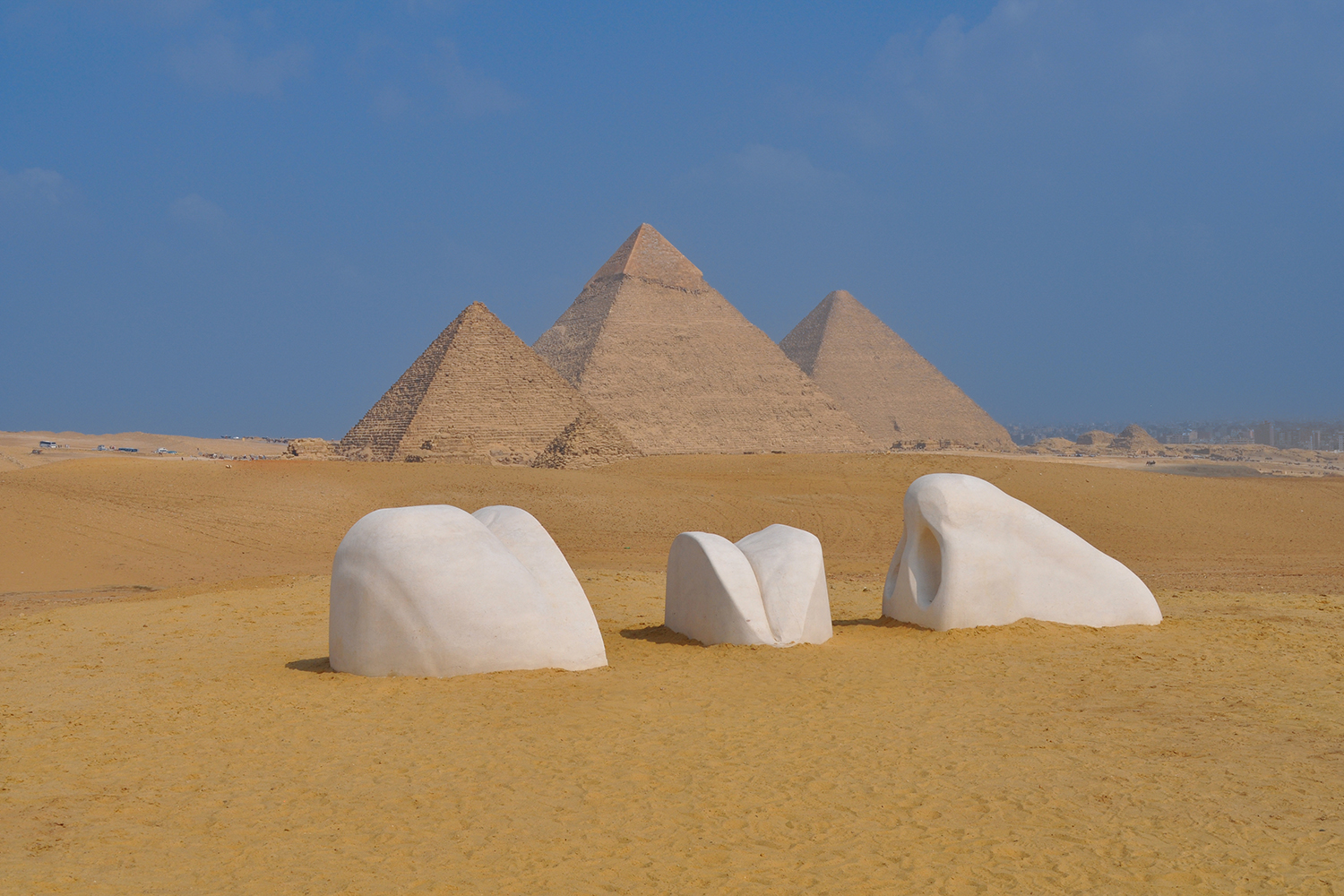 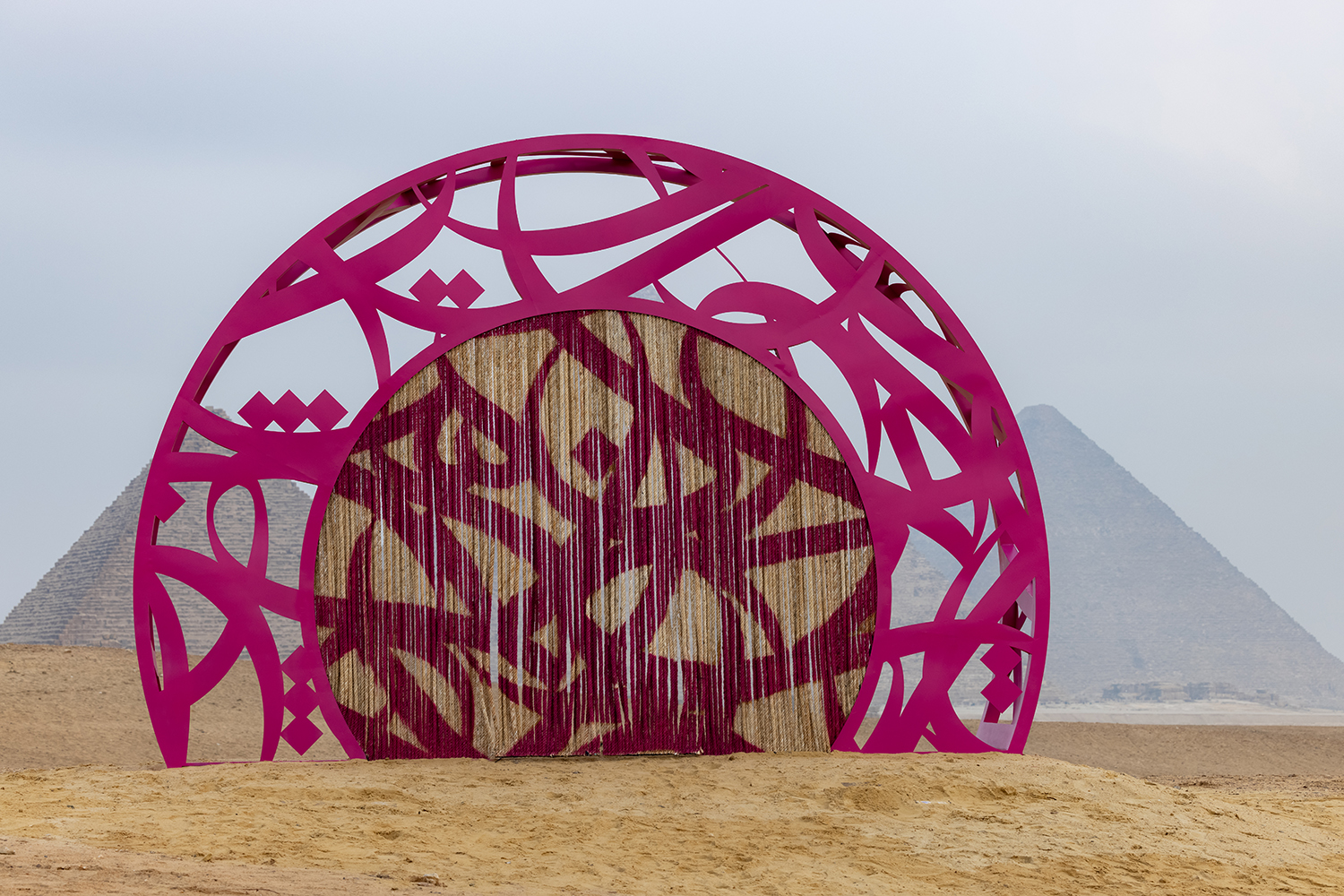 An abandoned car repair shop on Nabarawy street in walking distance to the city’s bustling Tahrir Square by the Nile River hosted a large display of artists whose works were installed in response to the venue’s ambiance characterized by its former use. Christian Pellizari’s twenty feet long serpentine sculpture featured 150 pieces of Murano glass, suspended from the ceiling of a vacant storage unit towards the pile of sand covering the floor. Four abstract acrylic paintings by Essa Abo Elsaoud transported pastel hues in sharp features into the empty nooks of a crumbling wooden cabinet. “My grandmother lived in downtown Cairo,” said Abdel-Ghaffar about the neighborhood that captures the Egyptian capital’s soul with a medley of cultural sites such as the Egyptian Museum, the energetic Zamalek island, and the panoramic Nile stretch. “We are talking to everyone, from the little downtown kid who walks into one of the shows to the tourist here to see the Pyramids and an international curator.” 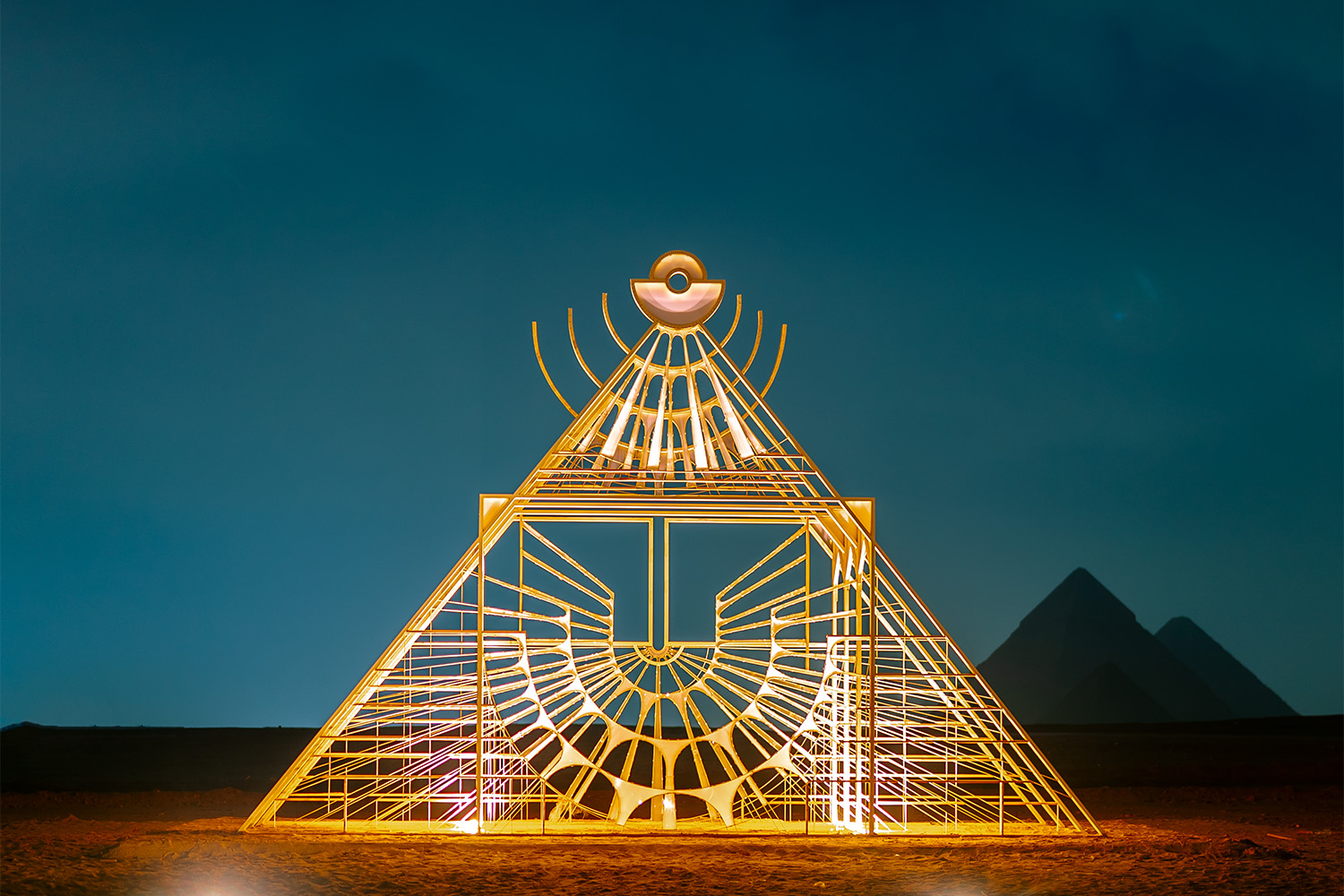 As the sun beams in the sky left the stage for orange haze with the dusk, the earthy glow over the plateau—as well as the twelve public sculptures on site until November 30—changed into a nocturnal mystery. With night came the celebration of Forever Is Now, right by the Pyramids awash in a dramatic lighting. After speeches by Abdel-Ghaffar and Egypt’s Minister of Foreign Affairs Sameh Shoukry followed the local opera band Fabrica’s concert. A full moon and some desert breeze later made for the crowd easier to respond to the inviting Arabic pop. “There is a transcendence between our past and the present—and artists today are the lens of the society,” Abdel-Ghaffar added.

Forever Is Now II is open to the public for free until November 30.